Bringing rock and roll to the high seas, Sir Richard Branson’s first-ever cruise ship Scarlet Lady is as flamboyant as the billionaire himself. 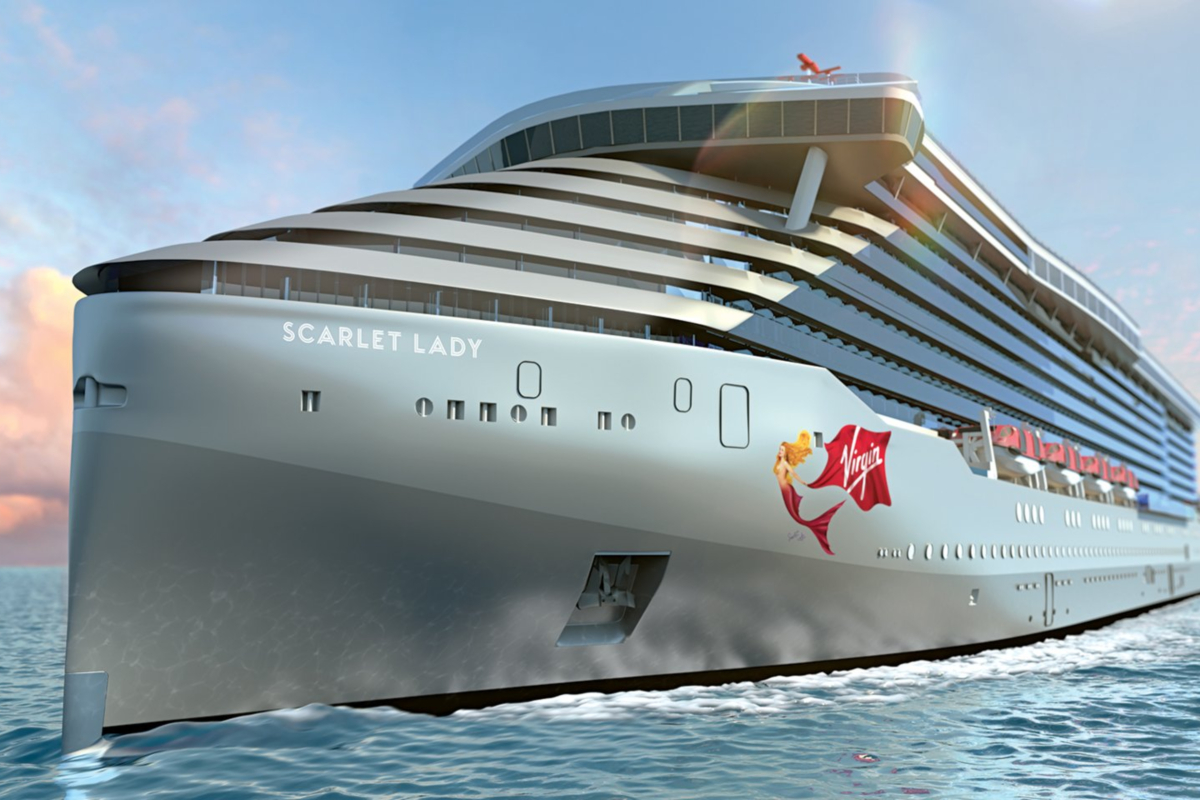 With more than 20 restaurants, an eclectic mix of entertainment venues, multiple spa and beauty facilities and a collection of fitness centres offering free classes, it’s no wonder Sir Richard Branson’s new adults-only cruise ship has the rest of the industry shaking in its boots.

Currently under construction in Italy, Virgin Voyages’ Scarlet Lady will embark on her maiden journey from Miami to the Caribbean in July 2020, accommodating more than 2,770 passengers (or “sailors”) and 1,150 crew on board – including Branson himself.

The British billionaire businessman announced that he will celebrate his 70th birthday with a four-night cruise from Miami to Havana, staying in one of the ship’s exclusive RockStar Suites.

Inspired by ‘The Modern Romance of Sailing’, Scarlet Lady’s sumptuous interiors and exteriors are the work of some of the world’s most successful design firms, including Tom Dixon Design Research Studio of London, Roman and Williams of New York, and Concrete Amsterdam.

However, the 110,000-tonne ship lacks something you’d undoubtedly find on most commercial cruises – children. Described as a ‘24/7 festival at sea’, the enormous party boat is strictly 18 years and over. 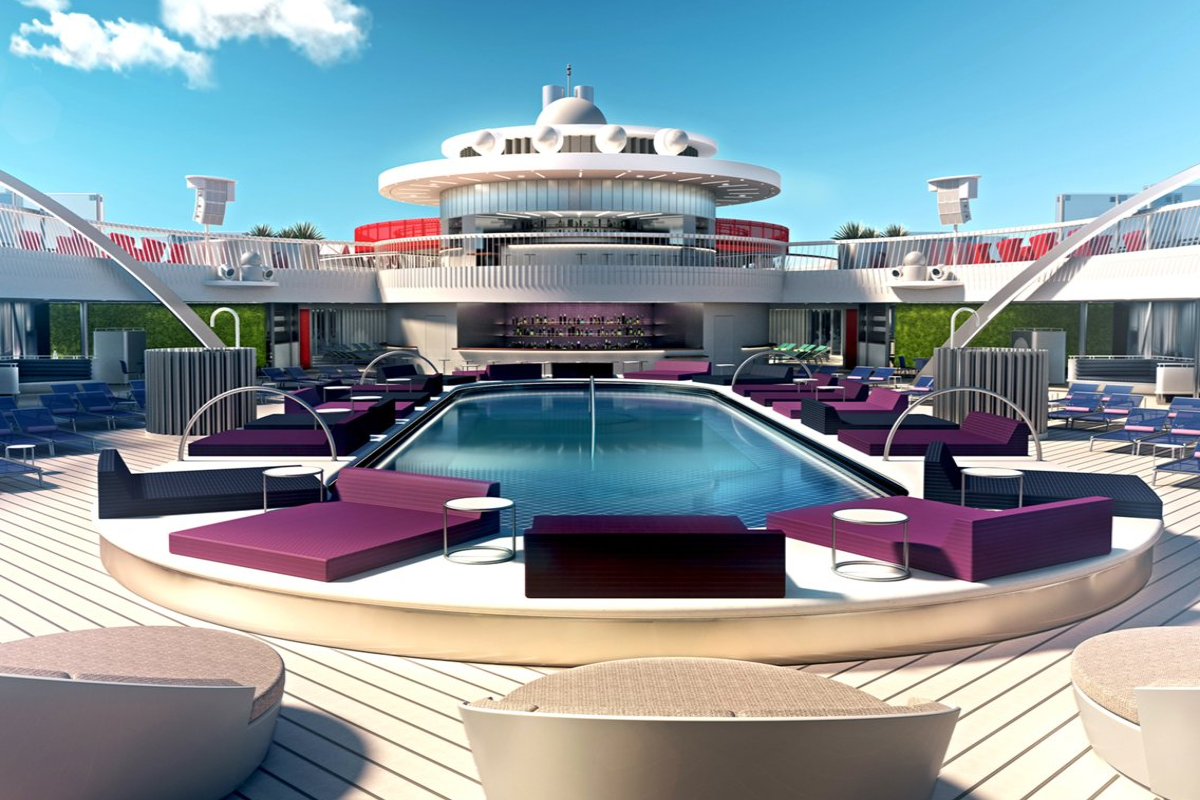 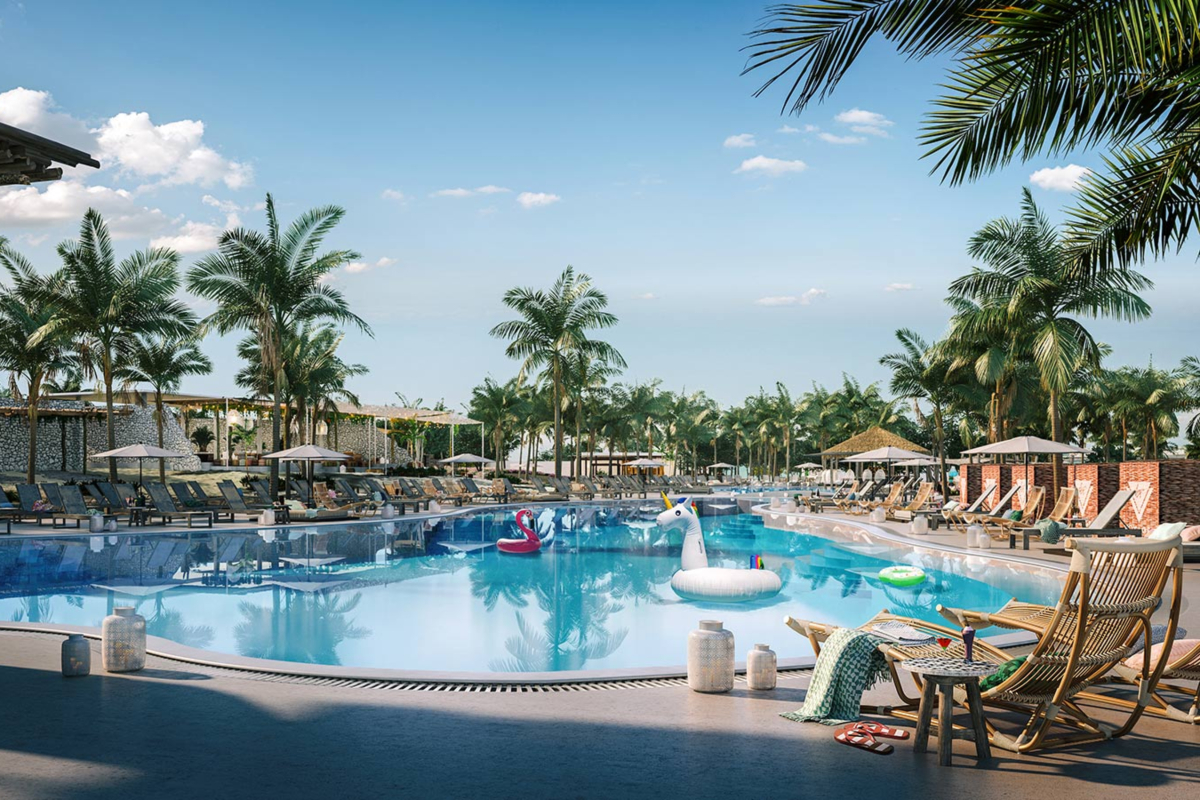 When it comes to food options, Scarlet Lady has ticked every box.

Headlining restaurants so far include Wake for steak and fresh seafood, Pink Agave for upscale Mexican, Razzle Dazzle for vegetarian-forward cuisine, Gunbae for lively Korean BBQ or The Galley for a selection of quirky food carts.

During the day, soak up the sun at the top-deck Aquatic Club before following the crowds to Scarlet Lady’s signature nightclub, The Manor. Named after Branson’s first recording studio, this ’70s punk-inspired bar starts the night with live shows in the ballroom before transforming into a throbbing two-storey nightclub.

The first ever transformational, multi-form theatre at sea, The Red Room offers boundary-pushing performances on its traditional Proscenium stage as well as dance parties – thanks to its flat-floor configuration.

When the ship docks in Bimini, Bahamas, guests can either head to The Beach Club for day-drinking by the pool, or stretch out their sea legs and explore the island. 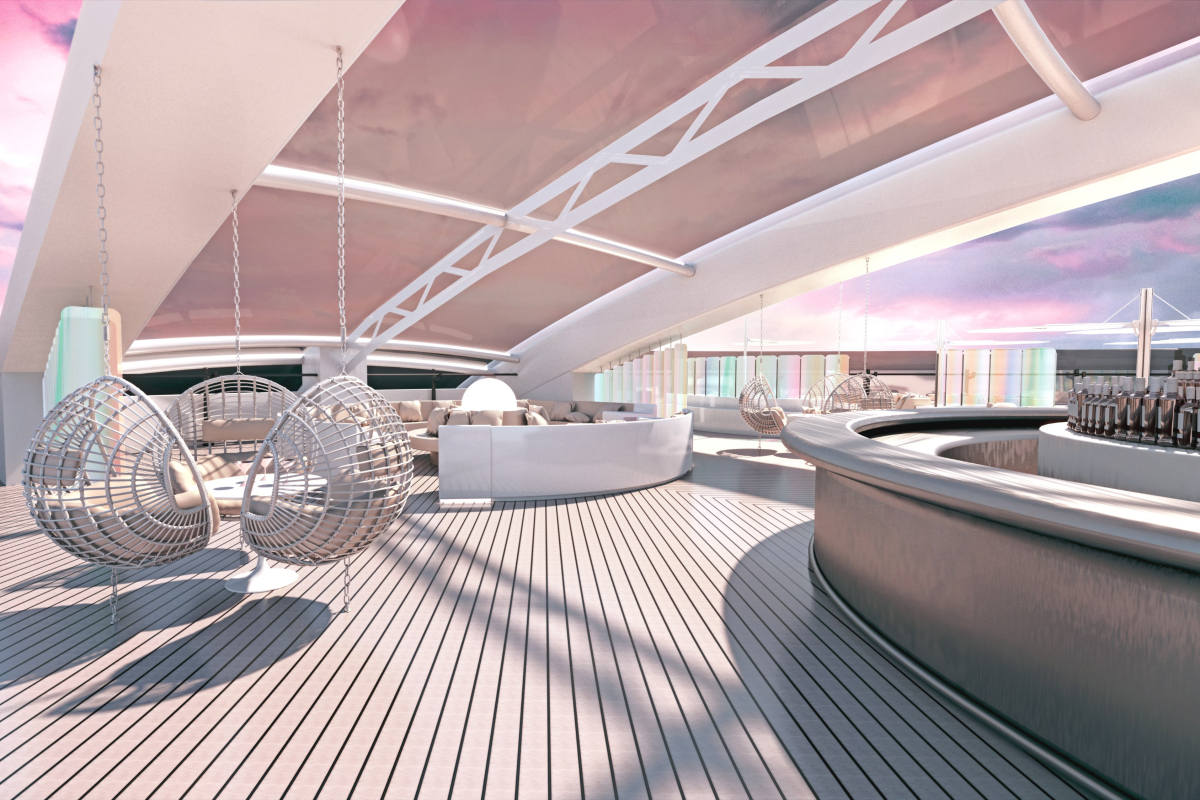 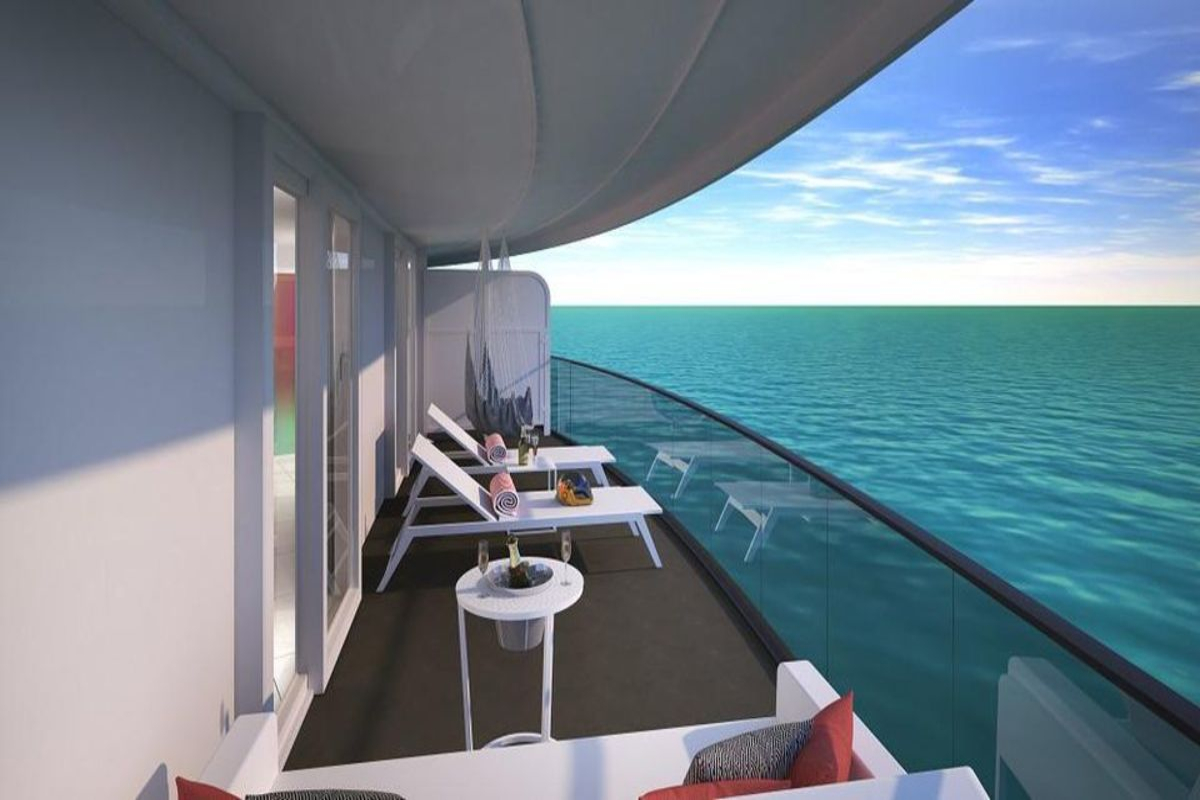 In true Branson style, the ship’s accommodations are as eclectic as they are luxurious. There are eight configurations to choose from, and 86 percent of Virgin Voyages cabins will feature a balcony and 93 percent will feature an ocean view.

Virgin recently unveiled its 78 retro-futuristic RockStar Suites. Designed by Dixon, each suite includes a gold-plated record player with vinyls and guitars, and a secluded balcony with ocean views.

RockStar guests will receive the full VIP treatment, with a personal voyage coordinator, private transport, a wardrobe team to help with packing and unpacking, and exclusive access to Richard’s Rooftop, a members-only lounge on the top deck.

For those that want to party like Branson, a stay in the six-person Massive Suite comes with a music room, private bar and sweeping terrace with an outdoor shower and hot tub, hammocks, and a catamaran net for stargazing. 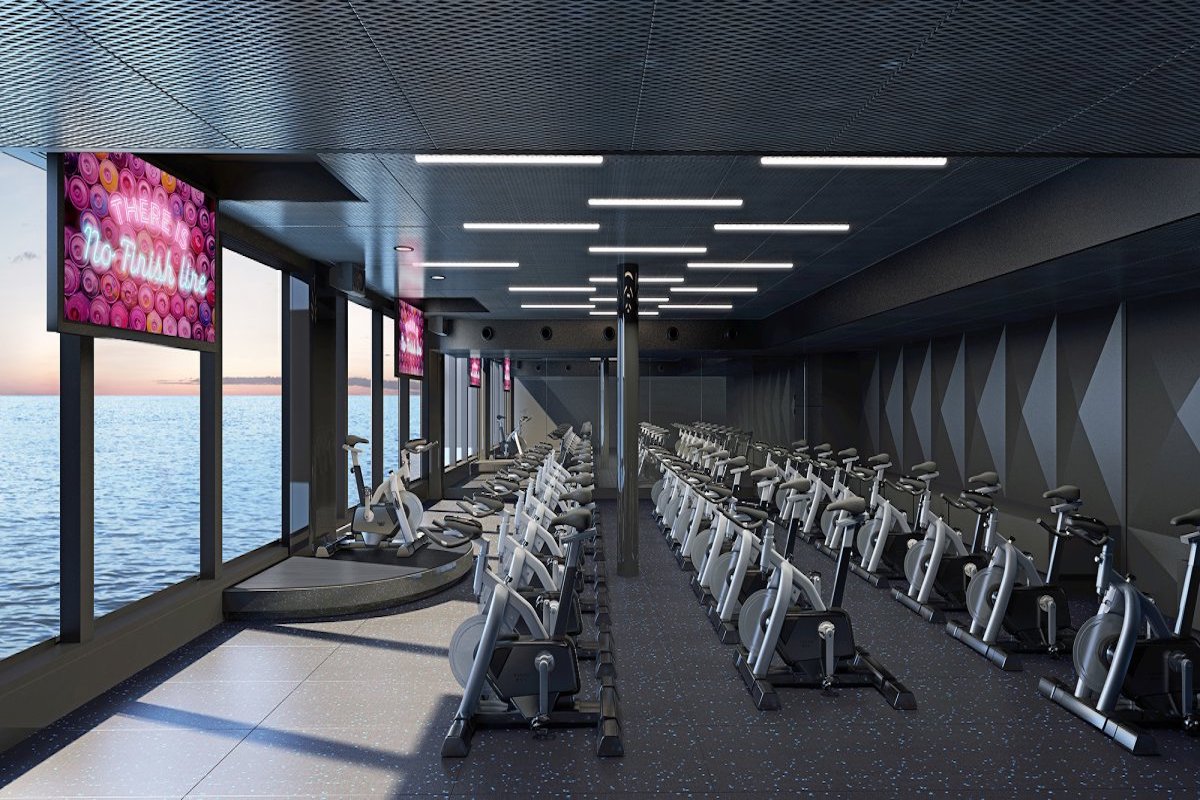 With individual Build, Burn, Bike and Balance rooms, Scarlet Lady has everything you need to sweat out last night’s one-too-many cocktails.

While the outdoor athletic club features boxing bags and a running track, the indoor gym offers a variety of group fitness classes, from cycling to yoga.

If you’re after further pampering, head to the ship’s exclusive barbershop Stubble & Groom or treat yourself to a mani-pedi and a new ‘do at Dry Dock Salon.

The meaning behind the name Scarlet Lady is two-pronged. Inspired by one of Virgin Atlantic Airways’ first planes, the name also reflects Virgin Voyages’ mission to upskill and promote female management on cruise ships. This effort will be clear on Scarlet Lady as well as Virgin Voyages’ second ship, which is due for delivery in 2021.