A Jungle retreat: The Datai Langkawi

Inside a prehistoric jungle, award-winning journalist Craig Tansley discovers a resort that might be the world’s most luxurious treehouse. 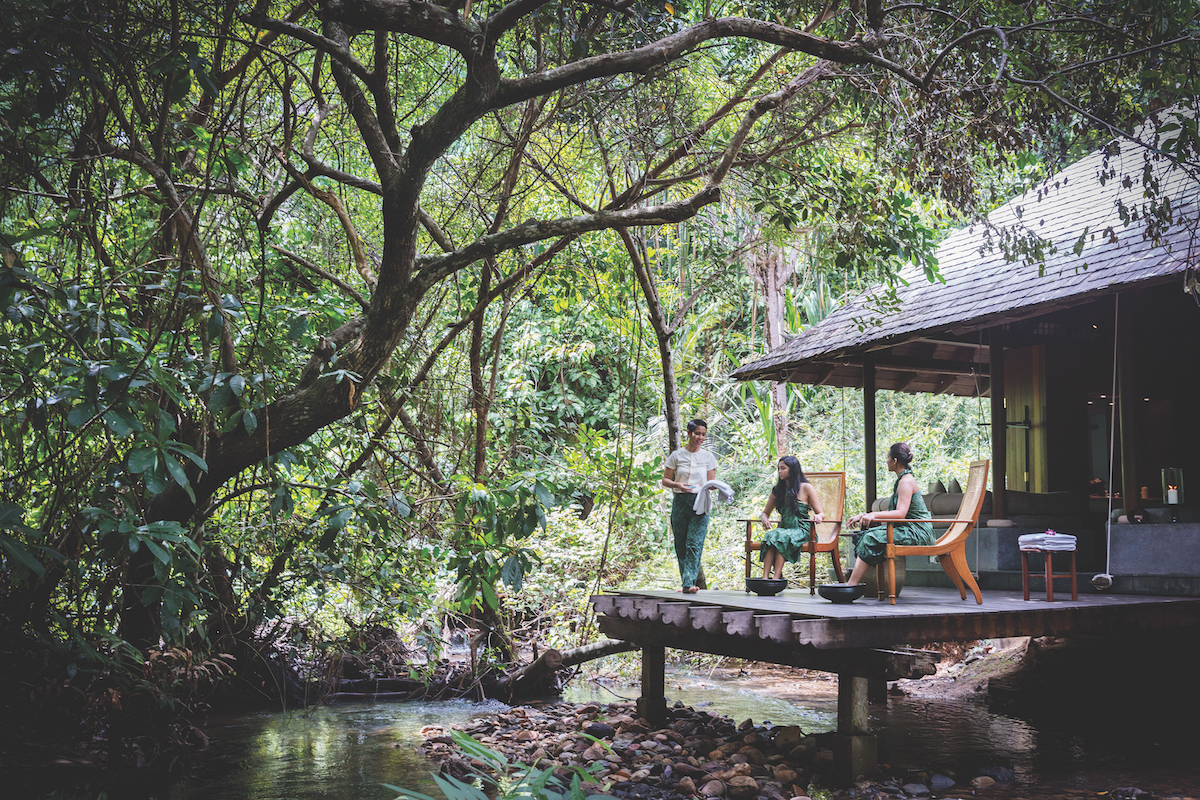 There’s a commotion upstairs. I hear screaming, lots of it, and a high-pitched voice telling someone – or something – to “get out”. A macaque monkey has entered a guest room and is helping itself to bar snacks (without leaving its credit card imprint). It wouldn’t be a dusky leaf monkey; they’re the shy kind with the black-and-white faces I just watched feeding in the tall trees by the beach. Though it could as easily have been a tiger squirrel.

“When you stay at The Datai, you’re sleeping in the jungle,” long-time resident and world-renowned naturalist Irshad Mobarak says, as we pause during his wildlife spotting tour to watch the ruckus in Room 312. “And humans aren’t the dominant creatures in jungles.”

The Datai Langkawi is built within a 10-million-year-old, 750-hectare virgin rainforest, at the base of the oldest mountain in South-East Asia: the 500-million-year-old UNESCO World Heritage-listed Mount Mat Cincang. I find the hidden paradise where the road ends at the remote, north-western tip of the popular Malaysian resort island, Langkawi. Though it sits above the one-and-a-half-kilometre-long Datai Bay, regarded as one of the top 10 beaches in the world by National Geographic, award-winning architect Kerry Hill preferred to set the resort back from the beach, so that guests would feel entirely cocooned in jungle. 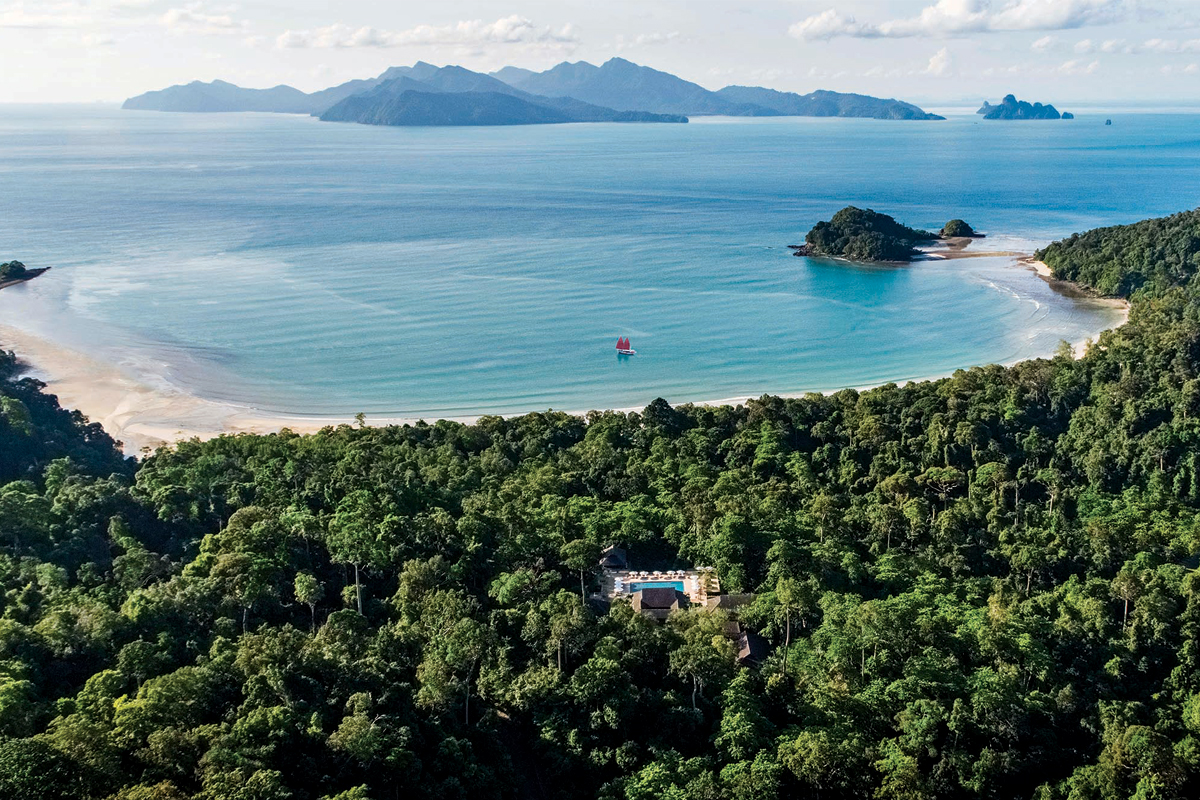 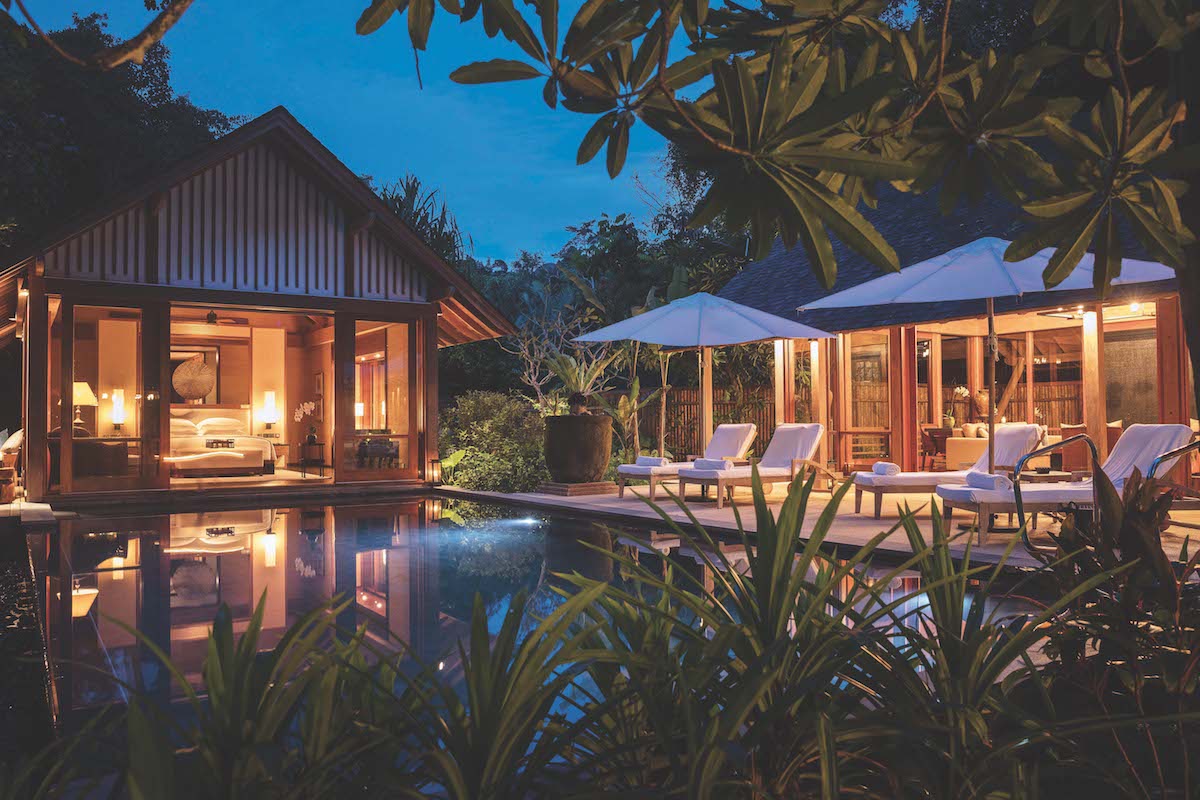 Before it opened its doors in 1993, trained elephants were recruited to help in the building process, transporting materials so as to leave the jungle the same way it had been for millions of years.

In fact, as I take the first of many swims and look back from the ocean, I can barely see the resort at all, aside from the Beach Club with its lap pool built beside the beach. Instead, The Datai is elevated amid the canopy of the rainforest, like a luxurious, grown-up version of the treehouse we wanted as kids.

“The Datai is elevated amid the canopy, like a luxurious, grown-up version of the treehouse we wanted as kids.”

And it’s just got a whole lot more luxurious. Long considered one of South-East Asia’s most opulent luxury resorts, The Datai has recently undergone an extensive US$60 million renovation which took 12 months to complete, under the auspices of the original interior designer, Didier Lefort of France. Every room, suite and villa has been extensively remodelled, while new rainforest pool villas have been added to the property, along with the resort’s tour de force, the brand-new, five-bedroom The Datai Estate, which comes with 24-hour butler service, two swimming pools and a private chef. Boasting 3,500 square metres of pure luxury, it’s one of the largest villas you can stay at in all of Asia. 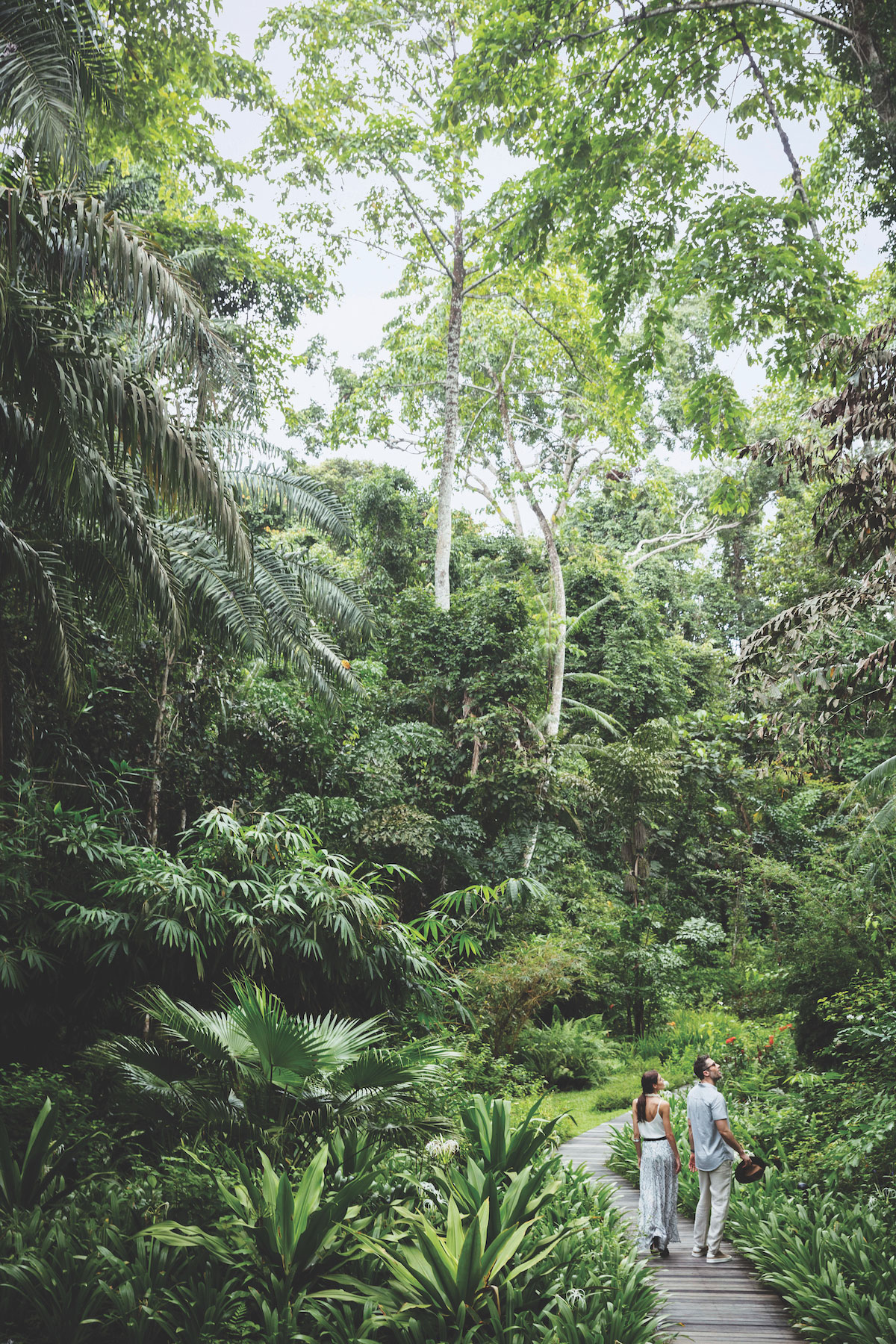 The next time I visit Langkawi, I’ll come straight to The Datai. The island’s tourist epicentre, Pantai Cenang, is a cluster of unremarkable restaurants, bars and budget hotels sitting on a crowded beach, where tourists parasail from the back of noisy motorboats close to shore. The Datai is the absolute antithesis; it’s hidden away in the island’s most remote corner, accessible by a climbing road that makes its way right through wild jungle while looking out across the blue Andaman Sea.

The memories of Langkawi’s hectic tourism scene dissolve the moment I arrive at reception. I’m poured a glass of French Champagne as I sit back, high among the trees, in an enormous open-air platform that looks right out across to the islands of southern Thailand. Metre-tall great hornbills are feeding from gigantic strangler figs below, while a family of dusky leaf monkeys are feeding on fruit in the trees to my right.

For all the luxury offered, The Datai has long spruiked its back-to-nature ethos as its point of difference. Irshad has worked here since the resort opened, and his daily nature tours, at no charge, should be mandatory for all guests.

“These forests have been the laboratory for the evolution of flight amongst animals,” he says one morning on a tour. “The trees of the rainforest have allowed all manner of species to evolve wings to fly or to glide.” And so, from a suite which looks across the forest and down onto Datai Bay, I watch flying lizards, flying frogs, paradise flying snakes, flying squirrels, flying lemurs and other creatures you won’t see fly anywhere else but here, while oriental pied hornbills sit on the railing of my balcony. 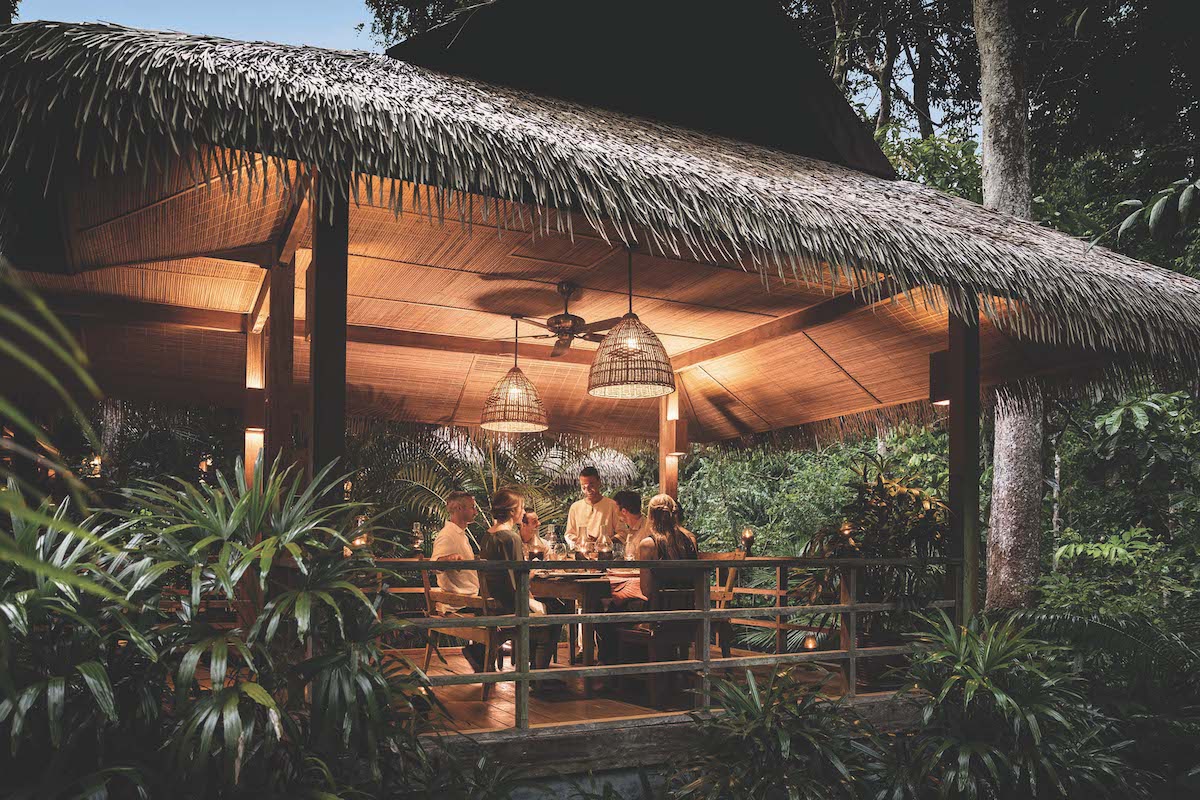 There are four restaurants on site for guests to choose between 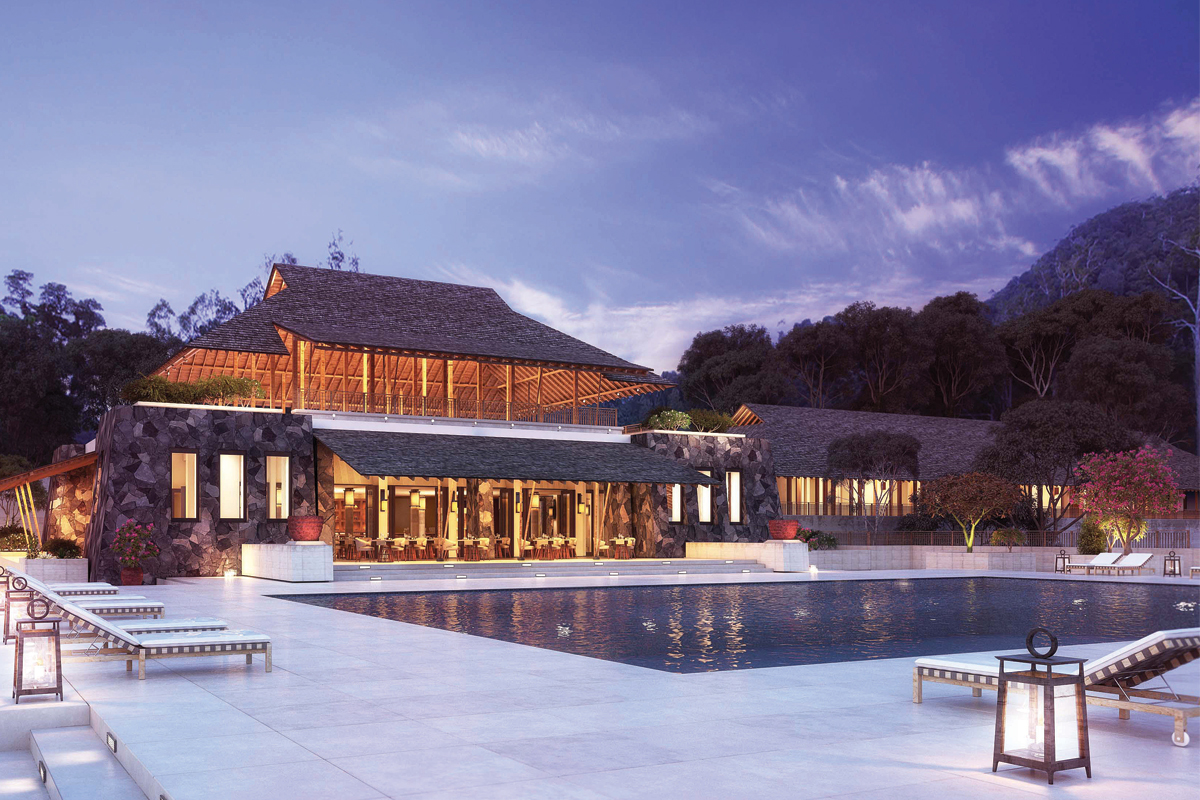 Just a few kilometres down the road, I get close to nature again at the Els Club Teluk Datai. Along the five holes built by the seaside, I watch a pod of Indo-Pacific humpbacked dolphins play and later, as I head up the winding golf course towards the sheer rock escarpments of the Mat Cincang mountain range, macaque monkeys strut across the greens in front of me.

Voted the world’s best new golf course when it opened four years ago, the Els Club Teluk Datai was designed by four-time golf major winner, Ernie Els, who decided he didn’t need to put sand bunkers on this course. Instead, he lets natural hazards like real beaches, mountain streams and the occasional ball-stealing macaque monkey do the job.

“Trust me, when people play here they won’t miss the bunkers,” Els told Australian Golf Digest. “The wildlife is amazing. You’ve got monkeys, iguanas, eagles… and monkeys occasionally steal balls.” However, most guests – and in the northern winter months the majority of guests are Brits escaping the cold – prefer more passive pursuits.

Fly direct to Langkawi International Airport from Kuala Lumpur (60 minutes) or Singapore (90 minutes). The Datai Langkawi is a 40-minute drive from the airport.

There are 121 rooms, villas and suites to choose from at the Datai Langkawi. Check out http://www.thedatai.com/

There are four restaurants on-site, including a traditional Malay kampong house, serving local cuisine, where guests sit on the floor, or my favourite, The Pavilion, built on top of 30-metre stilts over the rainforest where guests enjoy Thai cuisine as they look out over Thailand in the distance.

Between meals and time at the beach (there aren’t any motorised activities offered on The Datai’s private beach, but guests can sail, windsurf or kayak across the bay), wellbeing treatments based on the Malay concept of ramuan, a holistic blend, are served up at The Datai Spa. Treatment rooms are situated within the jungle, accessible via walking trails alongside slow-moving creeks, where monkeys sometimes come to watch. Local oils with foliage picked from the rainforest are used for treatments – the same blends Malay healers have used for thousands of years.

A chauffeured car arrives to take me to the airport at the end of my stay, and as I leave the resort behind via a narrow path cut through thick forest, a family of dusky leaf monkeys swing through the trees just beside the trail. My farewell party, probably; I wonder if that’s part of the tariff?

Craig Tansley is a Gold Coast-based travel writer who spends too much time on planes each year. He’s been travelling for 16 years and has been to over 60 countries, writing for publications from Copenhagen to Jakarta. This is his first feature for The CEO Magazine.