Tee off in New Zealand

New Zealand offers a variety of unique golfing holidays for those who are craving some real adventure in their game. Maybe it’s the imagery of magnificent mountain ranges, wild rivers and spectacular beaches. Mention New Zealand and its deserved reputation for adventure sports comes quickly to mind, but here you can also find some of best golf courses in the world.

In the Land of the Long White Cloud, it is golf that boasts the highest participation rate of any sport, and with good reason. New Zealand has about 400 golf courses – the second highest number of courses per capita of any country in the world – and they are readily accessible to the population of around 4.8 million.

The country’s reputation for unforgettable holidays has been enhanced considerably for golfers in the past couple of decades by the efforts of internationally renowned golf course designers and architects including Jack Nicklaus, Robert Trent Jones Jr, David Harman and Tom Doak, who have developed world class courses up and down the country.

Those courses vary considerably in their character and style, with most making good use of the local topography to carve out exceptional tracks in New Zealand’s quite narrow coastal strips, hilly interior and rugged mountain ranges. So Kiwi golf courses range from classic links-style courses, usually found near the sea, to parkland courses further inland and dramatic alpine courses. All of them boast spectacular scenery, challenging designs and typical warm local hospitality. And New Zealand has so much to offer golfers when they walk off the course that a golf holiday can be the trip of a lifetime.

New Zealand has 14 marquee, or international standard golf courses, often with resorts or other attractions attached, and about 24 experience – or perhaps tier-two – golf courses, which feature local Maori culture and historic attractions, country charm and reasonable green fees. They’re often located near marquee courses to attract travelling golfers looking for variety in style and local flavour in a golfing holiday. Whatever your preferences, you can’t really go wrong.

10 of the best golf courses in New Zealand 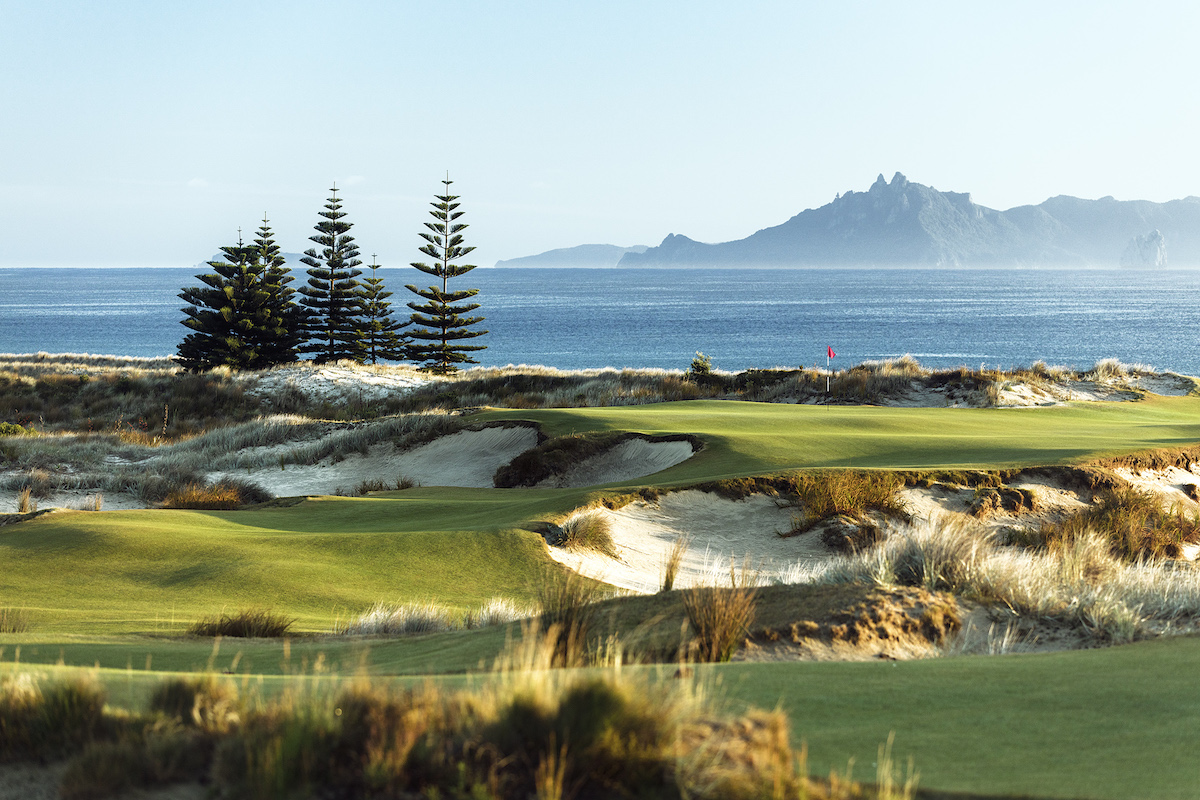 The spectacular Tara Iti course, about an hour north of Auckland, opened in 2015 and immediately gained a reputation around the world as a premier destination for golfers.

It was designed by Tom Doak, who also designed Cape Kidnappers (see below), and features a very natural landscape style that appears to have been sculpted by wind and time. Its contours in sandy soil, hummocks and natural bowls feature fescue fairways, waste areas and – surprise – no formal bunkers. It is definitely a challenge for every level of golfer, and a caddie is a must for both carrying bags and offering advice.

Tara Iti has set the golfing world alight with its magnificent layout. Its private club status offers limited access to the public in the form of one visit, during which you can stay as many nights as you like and play as much golf as you like, but that will be your first and final visit unless you actually manage to join the club. It helps to have connections. 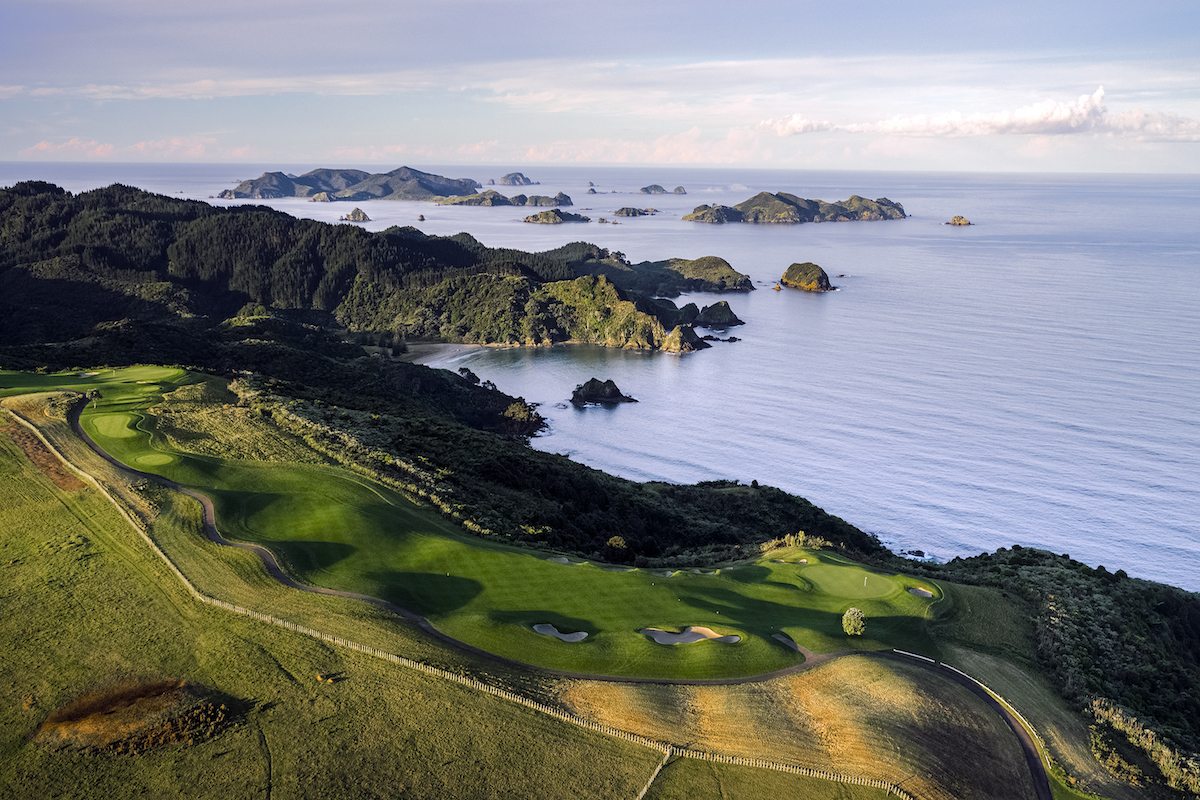 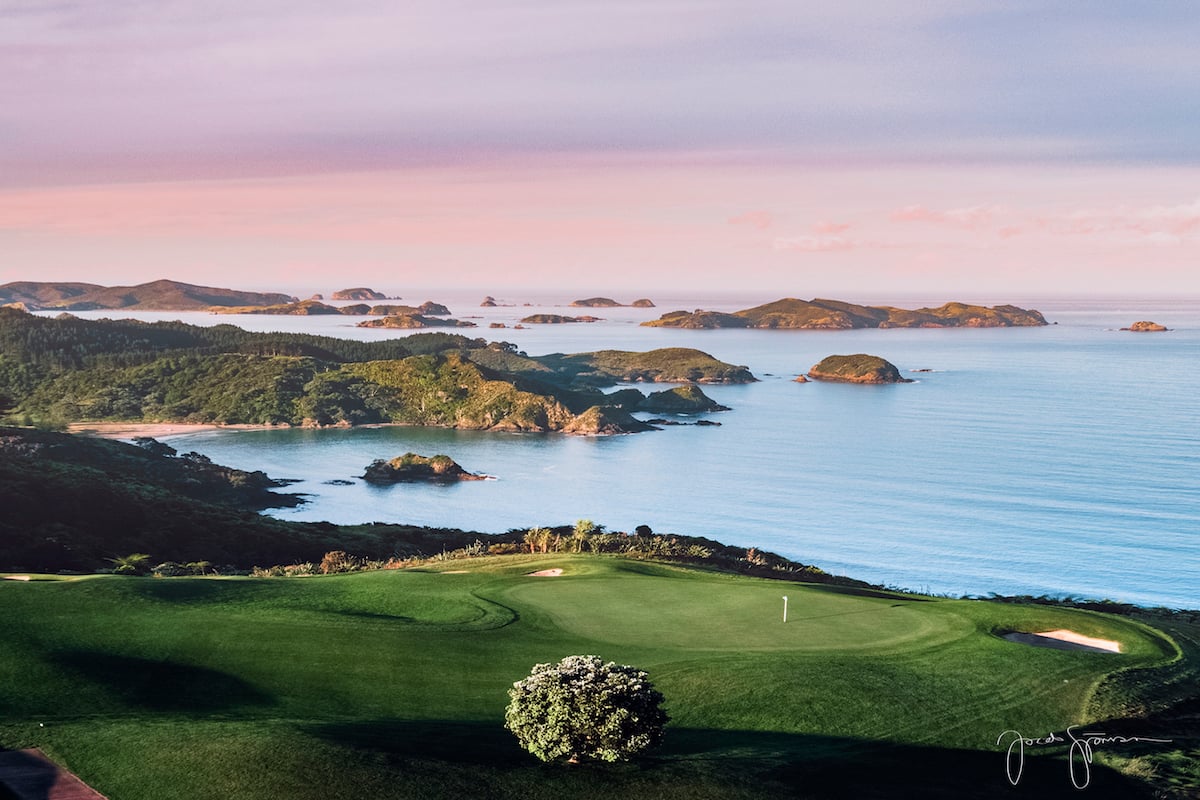 About half an hour north of Kerikeri in the Bay of Islands, Kauri Cliffs has garnered so many accolades around the world – it was voted by Golf Digest as the Best New International Course in 2001, ranked 39th in the world by Golf magazine in 2013–2014 – and offers a supreme golf challenge with outstanding views from nearly every hole. US PGA pro Brandt Snedeker once called it “Pebble Beach on steroids”.

The 6,528-metre, par-72 championship course was designed by David Harman, with six holes that meander along cliffs overhanging the pounding sea below. The opening three holes can give a false sense of security before a series of tough holes pile on the angst.

Its signature hole is the par 3 7th, called Cavalli, which plays along a ridge line with a panoramic view of the Cavalli Islands in the background. The back nine includes holes winding through marshes, farmland and some forest. Many regard the par 4 17th hole as one of New Zealand’s finest holes, and the clubhouse balcony view is one of the most spectacular in the golf world.

The course is attached to The Lodge at Kauri Cliffs, part of the Relais & Chateaux chain, and includes 22 suites and a two-bedroom Owner’s Cottage. The resort has access to three private beaches. 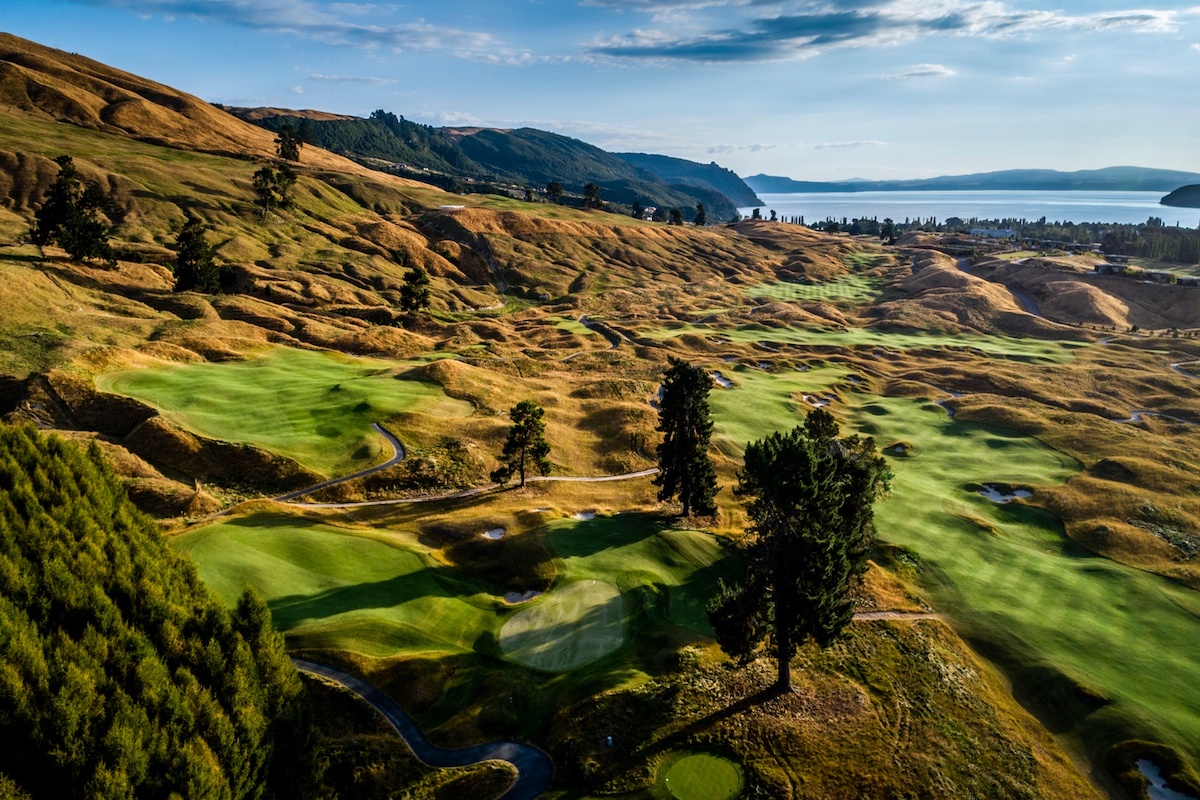 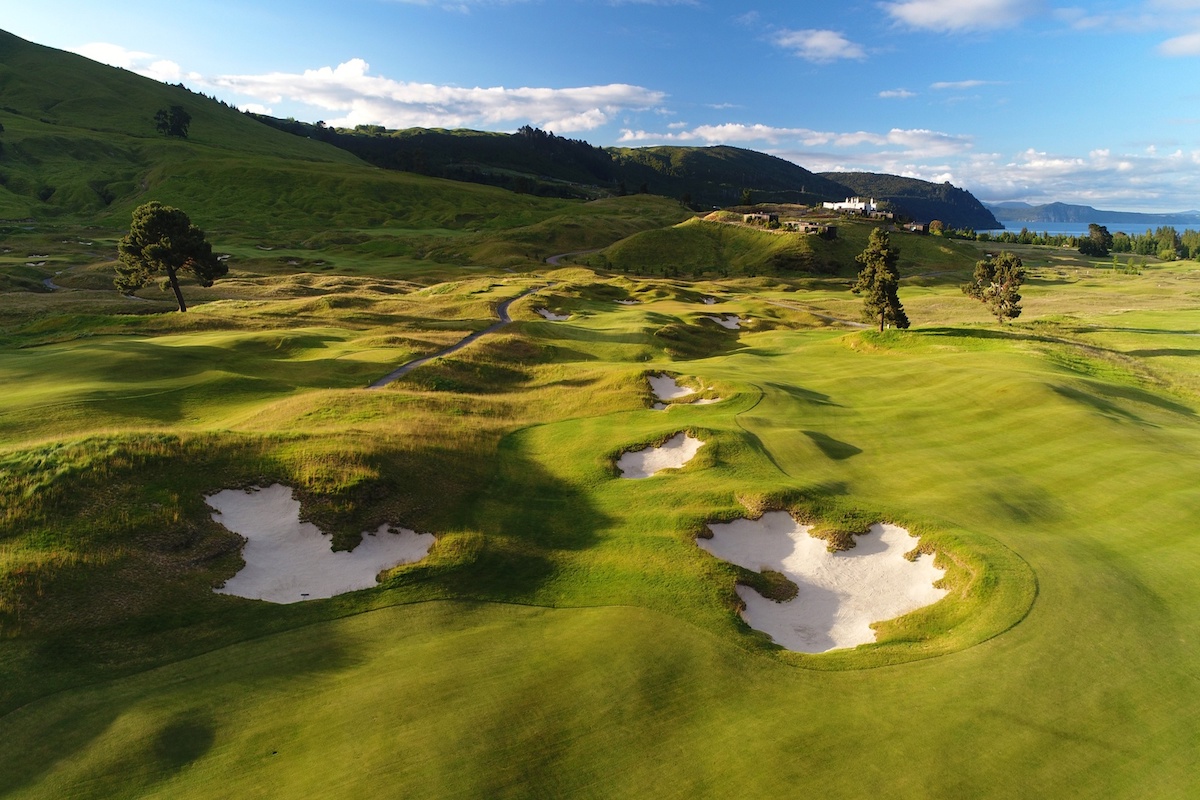 Designed by the legendary Jack Nicklaus, Kinloch opened in 2007. Situated near Taupo, it features a links course festooned with fescue and heather grasses combined with a parkland character.

This 6,734-metre course is a real test of your game from tee to green, and the fast, sloping greens mean you need a putting stroke that doesn’t let you down. The par 4 10th hole provides an awe-inspiring view of the course and Lake Taupo. The fairways feature elevation changes and carries that require steady iron and wood play, and split fairways on the 8th and 16th holes give you options – or escape plans in an emergency.

The back nine holes are more spacious and offer strong short holes and dramatic longer holes with some steep zones and angled greens. Not for the faint of heart. 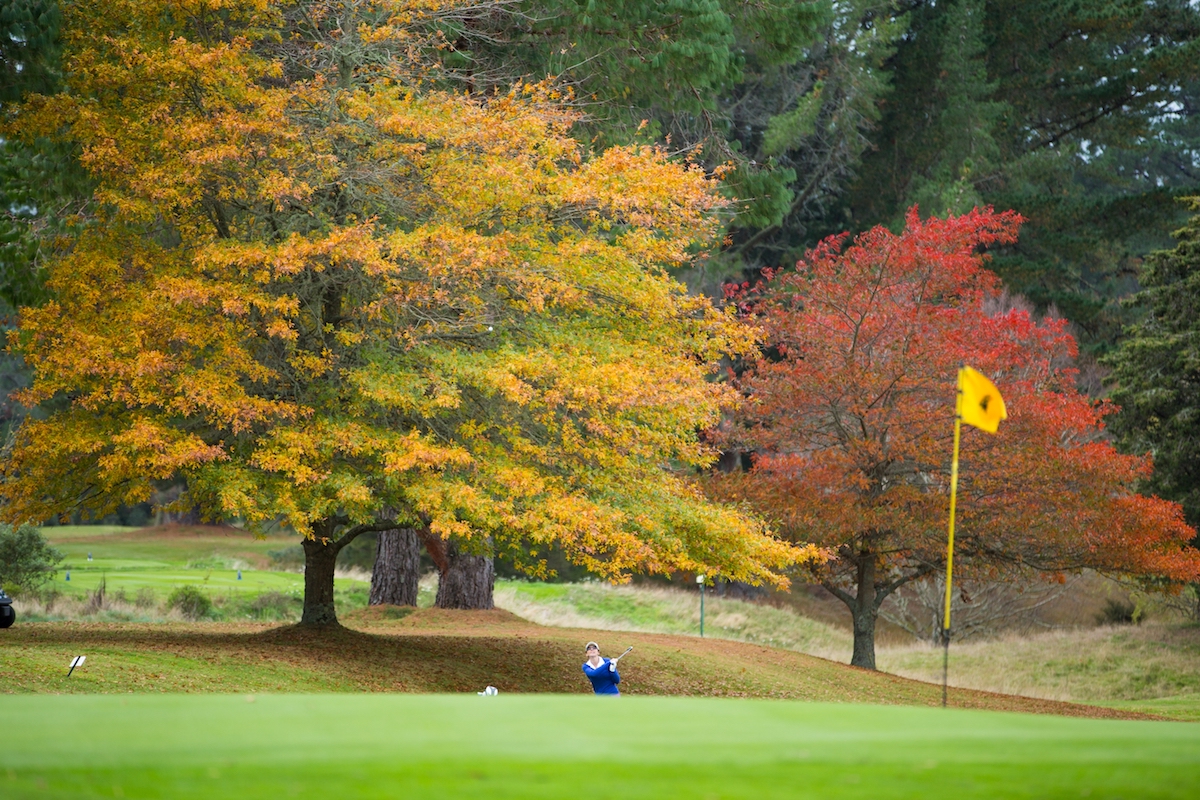 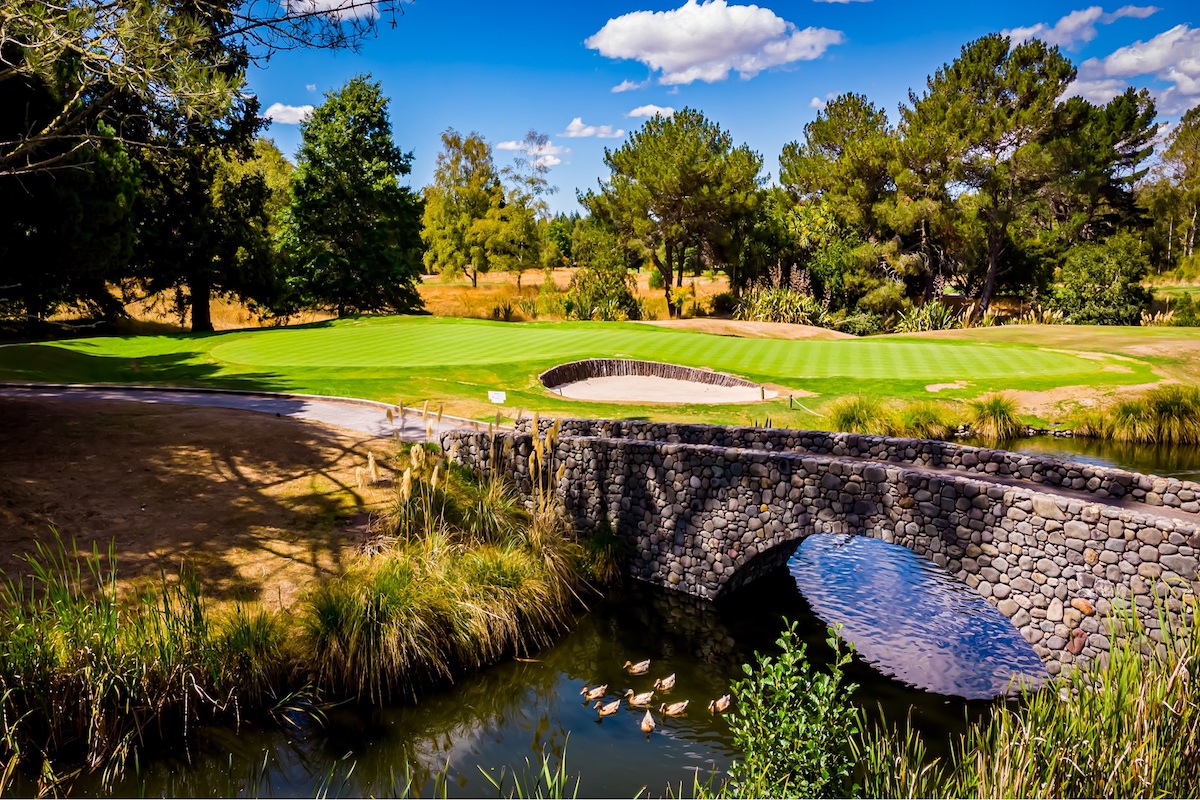 Not far from Kinloch is Wairakei Golf + Sanctuary, opened in 1970 and is regarded as New Zealand’s original golf resort. The course was designed by Peter Thomson, Michael Wolveridge and John Harris to maximise the potential of the undulating landscape and pine forest nearby, with bunkers, ponds and waterways that take their toll on wayward shots. The 6,460-metre course was given a design nip and tuck by Thomson and Wolveridge in the 1990s, and recently received a major replanting of native and exotic trees, with pheasant, kiwis and deer introduced to the area.

The golf club and resort is also a wildlife sanctuary, providing a rewarding extra point of interest. An agreement between Wairakei Golf + Sanctuary and the Department of Conservation was reached in 2012 to conserve and restore natural features in the area and erect a high fence to keep predatory animals out. This project is the brainchild of resort owner Gary Lane. 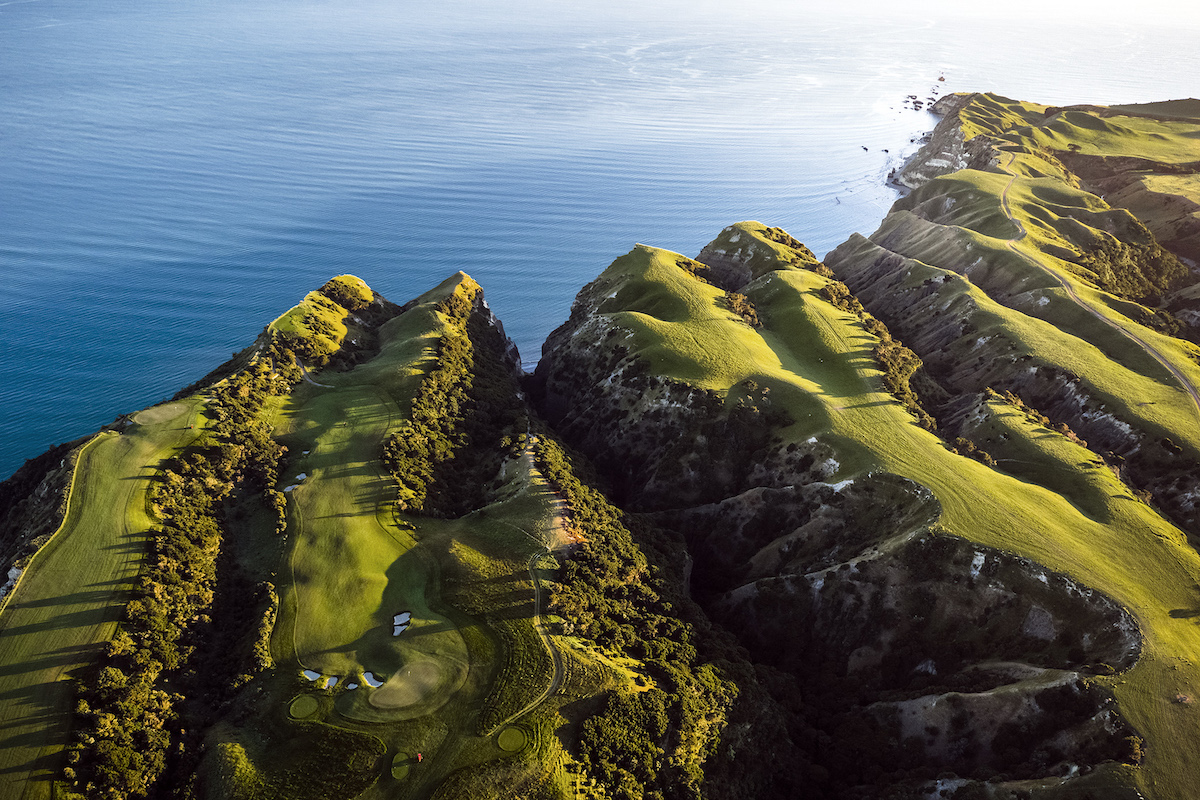 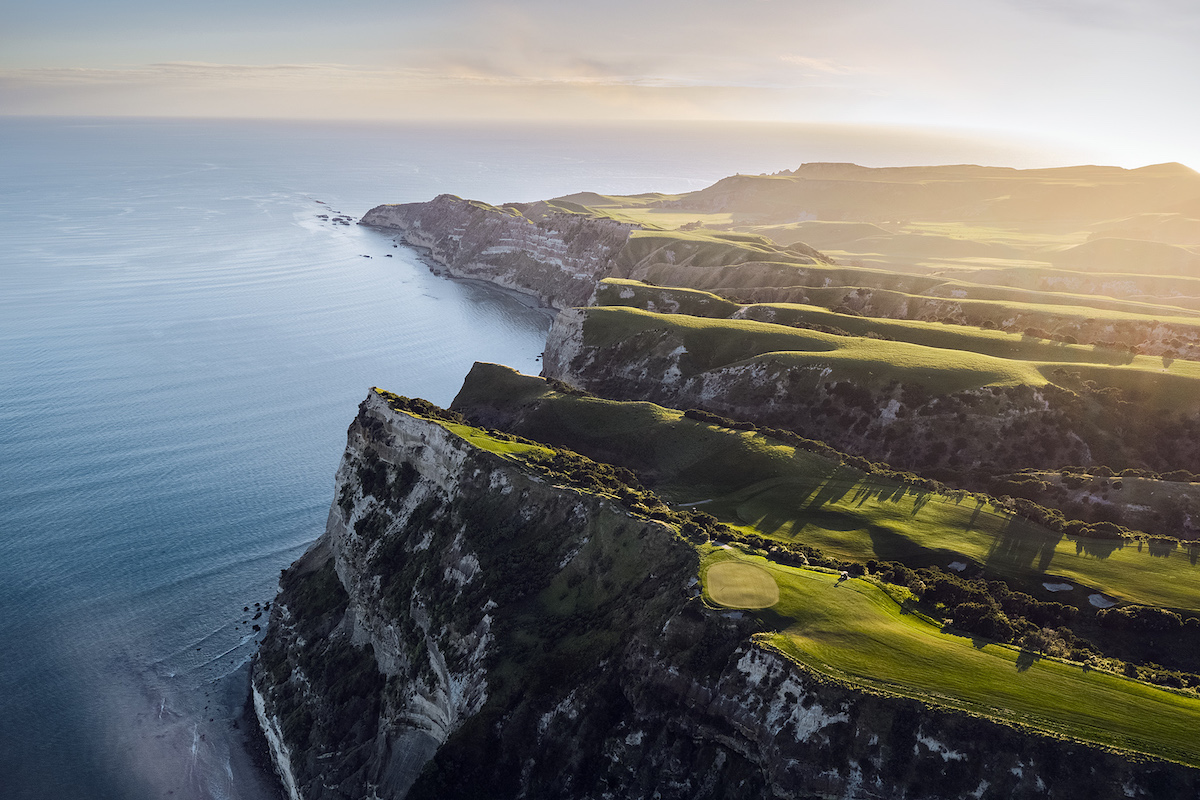 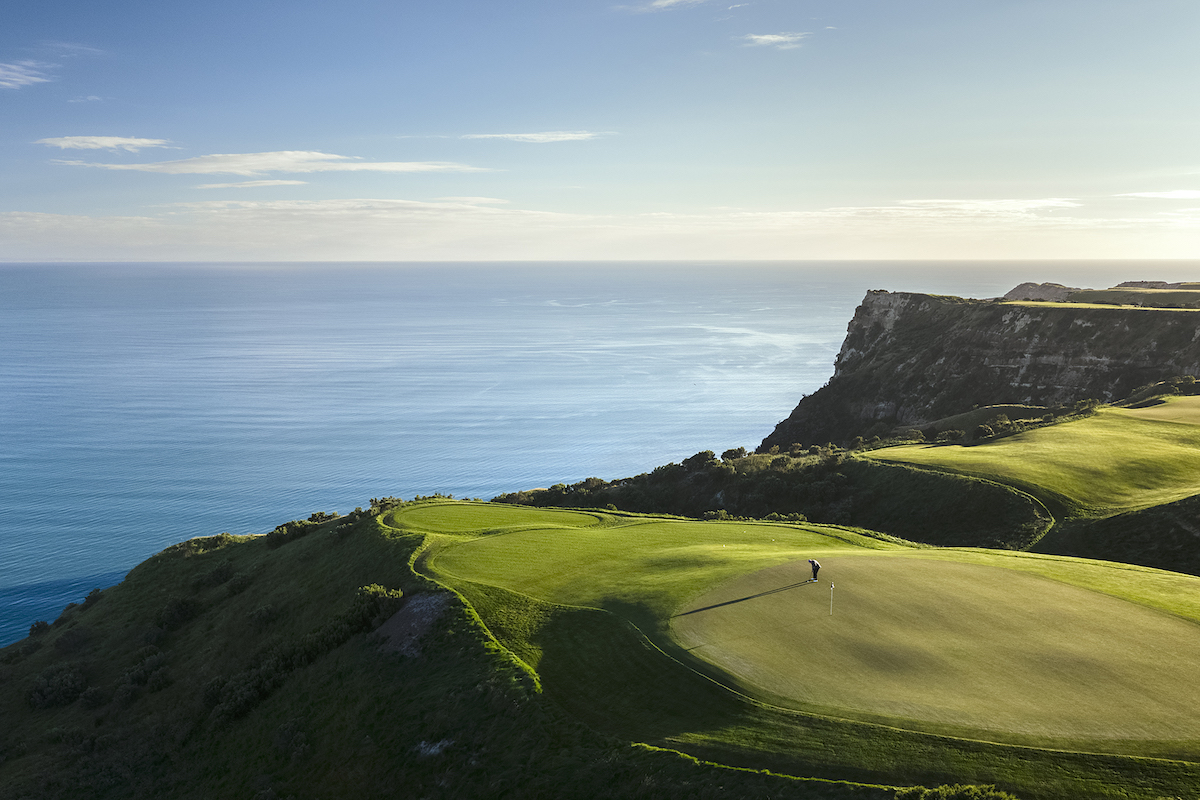 Cape Kidnappers perches precariously above cliffs on the southern end of Hawke’s Bay, using over 2,500 hectares through farmland and native bush. Designed by Tom Doak, it was opened in 2004, and ranks in the top 100 courses in the world.

The 6,569-metre, par-71 course offers a serious challenge to every golfer but is also a magical day out in awesome scenery. The back nine weaves along a large ridge towards Cape Kidnappers. The signature hole is the par 5 15th – no less than Adam Scott considers it his favourite golf hole in the world. And he would know.

The Farm at Cape Kidnappers is one of New Zealand’s most exclusive resorts, and offers luxury accommodation, dining and other activities when you’re not on the course. 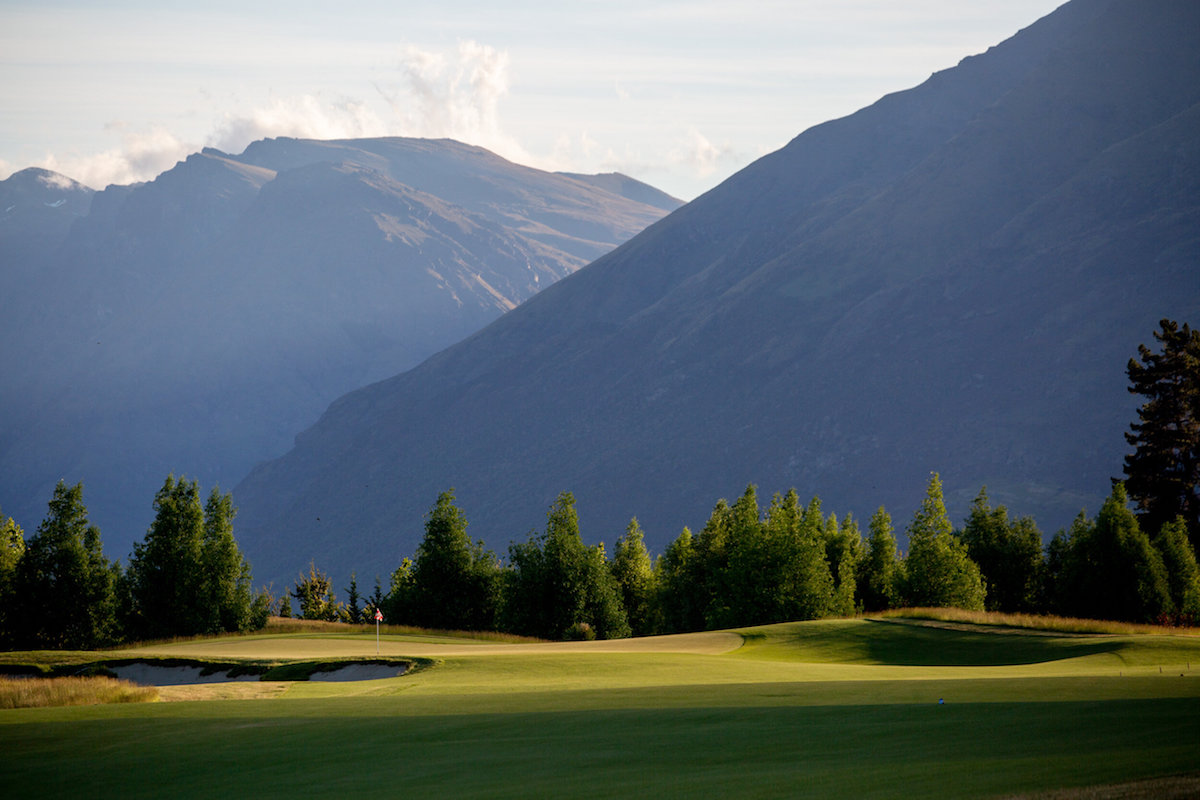 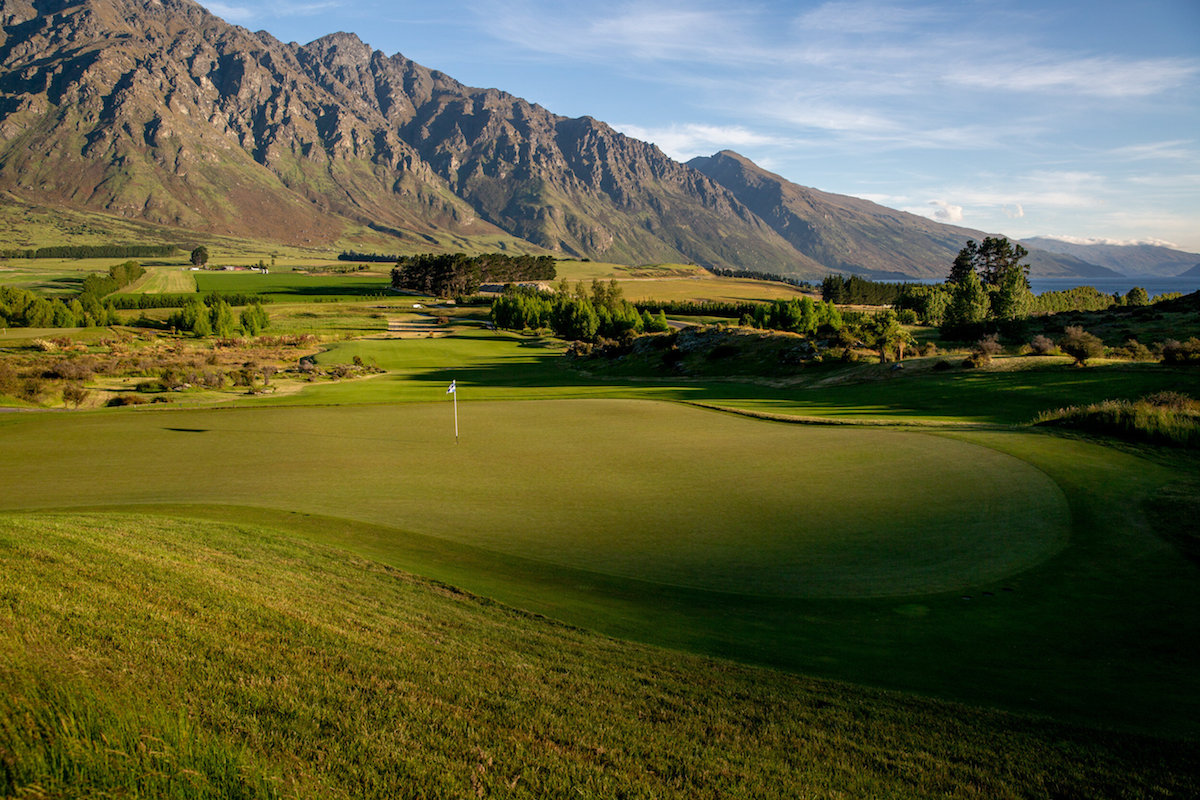 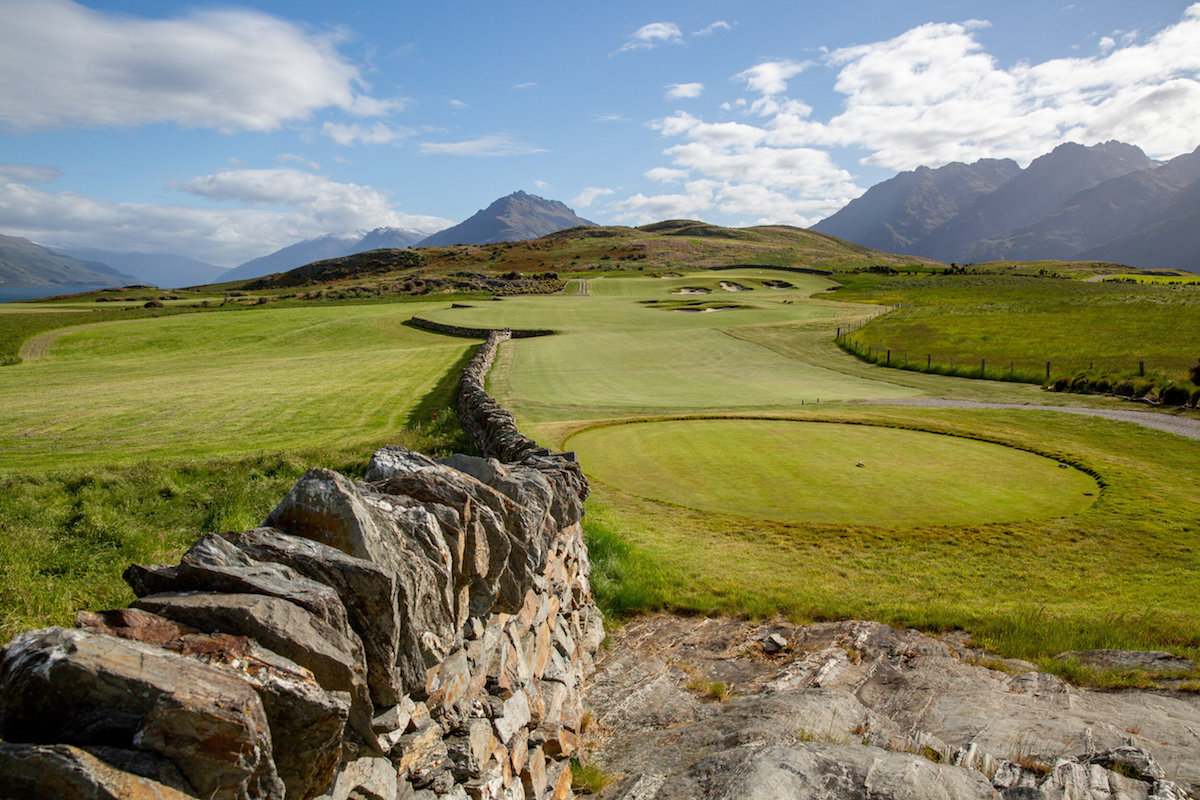 Jack’s Point sits between Lake Wakitapu, near Queenstown, and The Remarkables mountain range, giving the course an uninterrupted series of views as you play. It was designed by John Darby, a local property developer, and was named after Maori Jack, a local character who discovered gold in the region in the 1860s and saved two friends from a chilly death in the lake nearby. It opened in 2008.

The 6,388-metre, par-72 course is sculpted from the local landscape with minimal disruption to natural features, giving it a unique style and feel. The course uses rocky outcrops, wetlands, tussocks and old stone walls that were built last century for the original farm. The breathtaking holes from five to eight alongside the lake will make your round an unforgettable experience.

Rather than weave around hills and outcrops, Darby sometimes pushed holes up and down the slopes, making this a tough walk for those without carts. It also creates some difficult approach shots up and down sloping fairways, avoiding some deep bunkers that get in the way of already difficult shots. 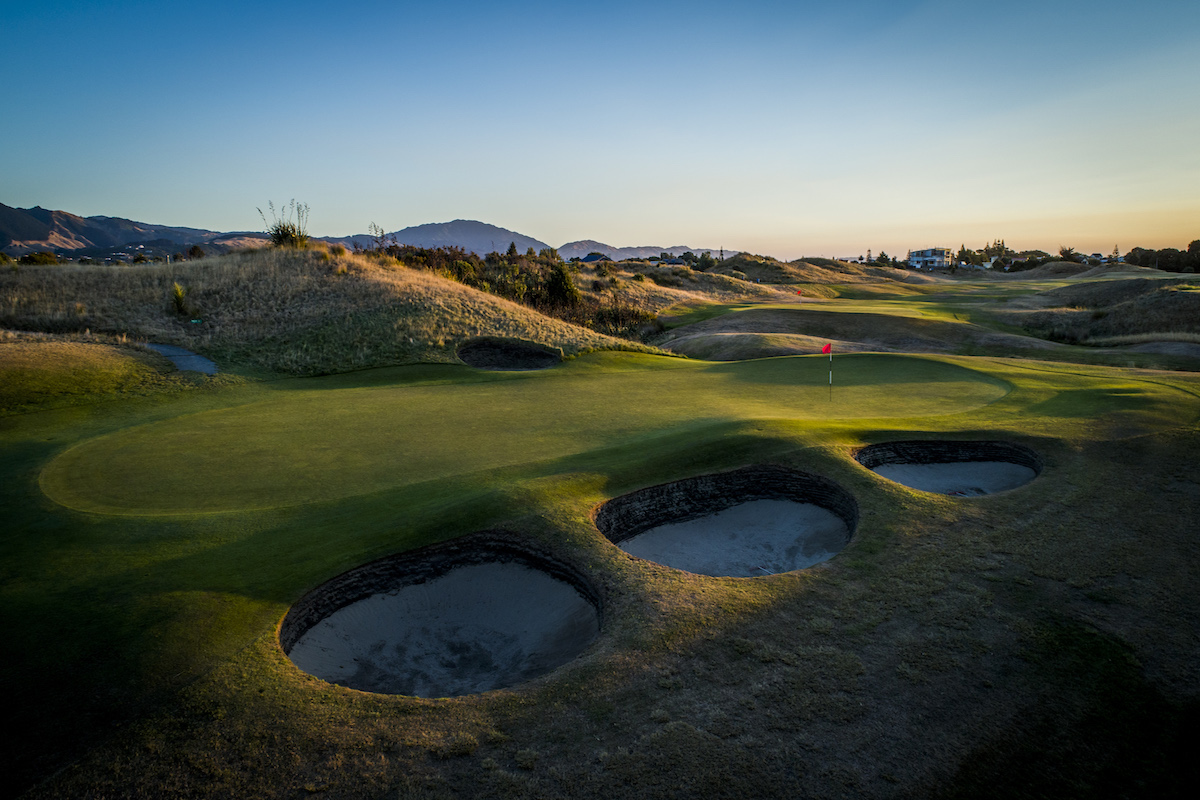 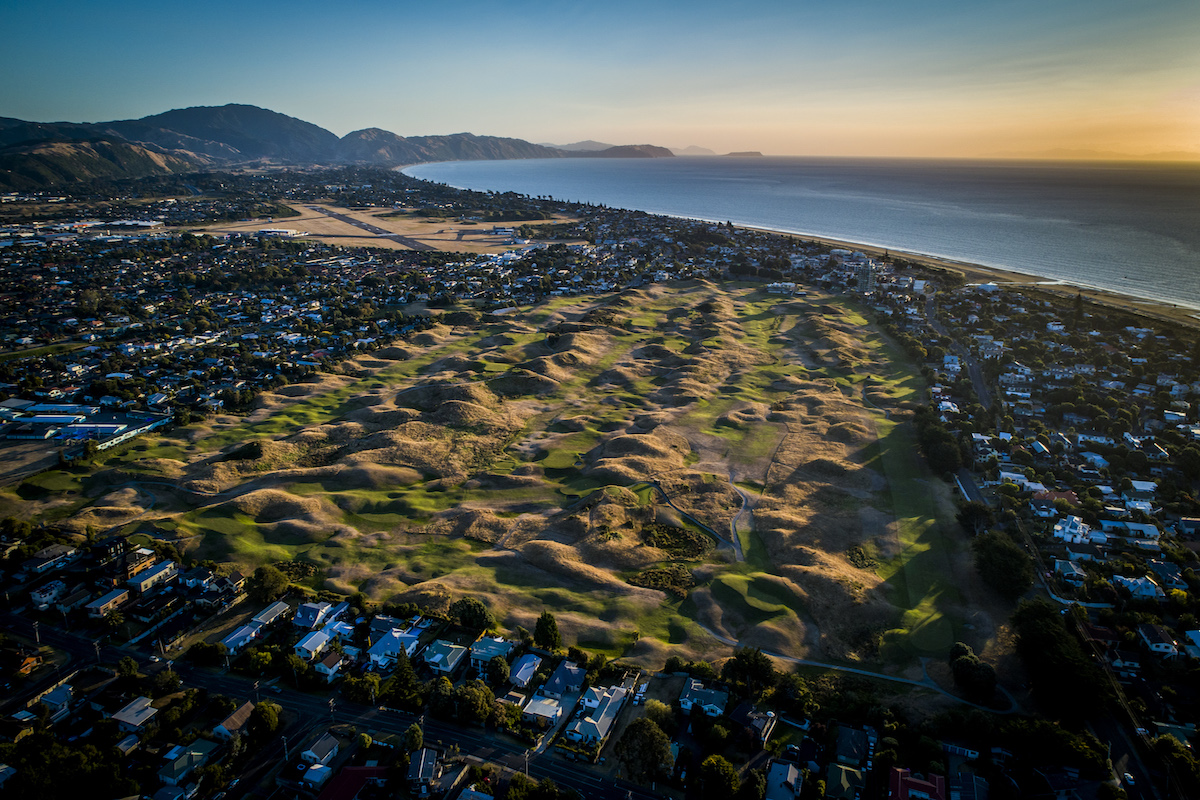 About an hour north of NZ capital Wellington lies a great links course that has hosted 12 New Zealand Opens. Many golfers regard some of Paraparaumu Beach’s holes as the best in the country, and a marvellous day out for golf.

The 6,014-metre, par-71 course was designed in 1949 by Australian Open winner Alex Russell, who was for a time a partner of Dr Alister MacKenzie. Paraparaumu is a rolling, meandering course so classic bounce and roll shots, integral to links playing, are the way to tackle this course.

While it’s a genuine challenge for skilled players, it does offer a memorable round of golf for novices too. Large greens roll true, and the wide fairways offer opportunities for birdies from well hit irons.

Paraparaumu Beach was at one stage ranked 71st in the world and has been enjoyed by a who’s who of international professional golf. 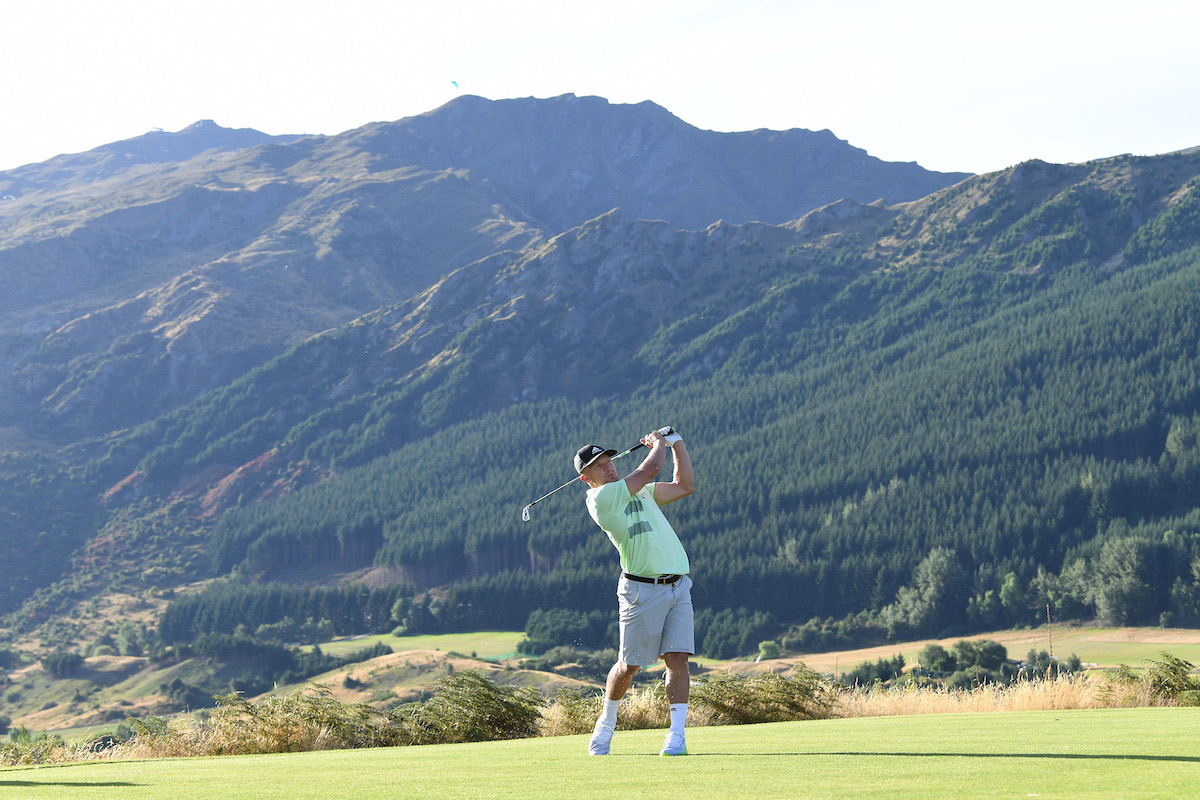 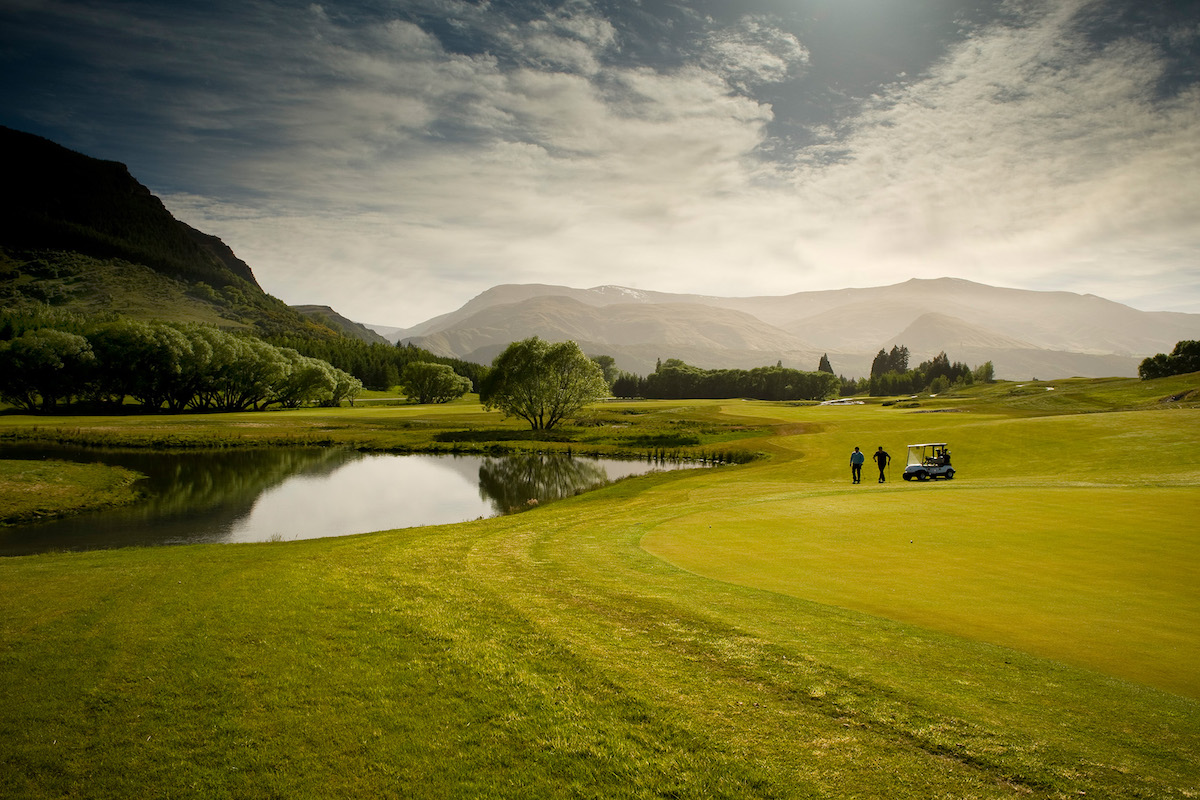 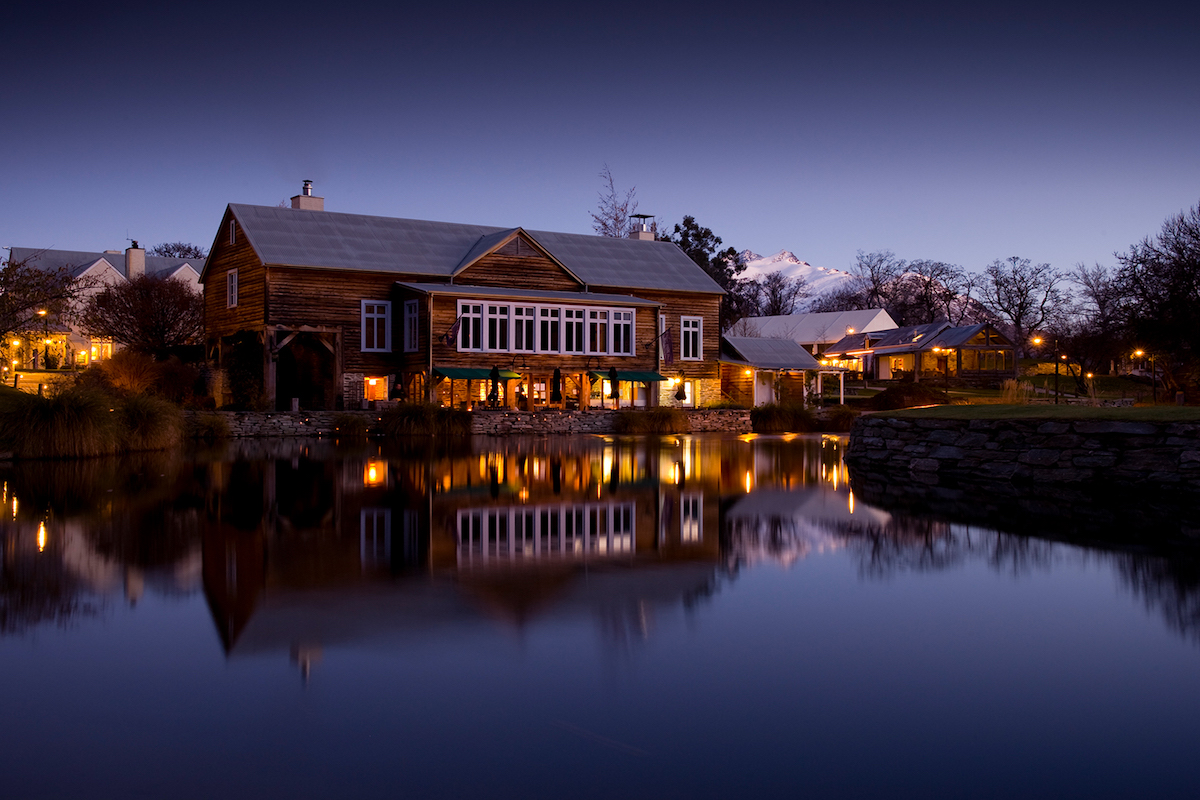 Set not far from Queenstown on the South Island is Millbrook, an internationally recognised 27-hole course and resort. It is situated in an alpine wonderland with a backdrop of The Remarkables mountain range. Divided into three nines – the Remarkables and Coronet nines, which combine for a championship 18-hole layout, and the Arrow nine, which offers more golf fun – Millbrook brings dramatic landscapes, challenging conditions and a great day out together for an impressive round of golf.

Designed by Sir Bob Charles, it is a mixture of parkland and links course styles, and uses hazards found in both such as creeks, trees, rocky areas and tussock roughs, with fabulous views in sections of the course. There is a choice of five tee options to suit golfers’ playing ambitions.

The 18-hole, 6,560-metre championship course won the 2011 Gold List Award for the best overall golf resort in the world by Luxury Travel magazine. The resort includes five accommodation styles, including hotel rooms and fairway homes, and offers several dining options, a spa and other activities. 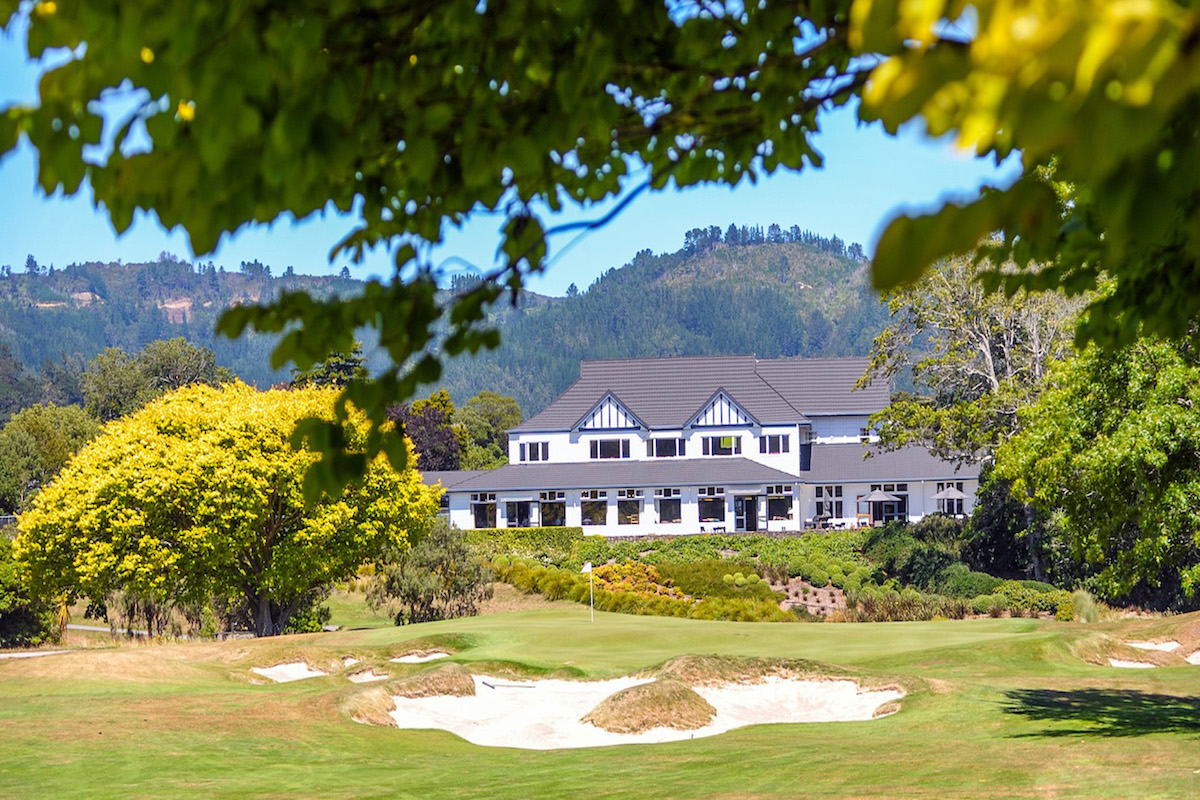 Royal Wellington can boast a history going right back to 1908 at Heretaunga. The original course was expanded and renovated in 1974 by Sloan Morpeth and JS Watson, and new greens were built by Sir Bob Charles and John Darby in 1992.

A more recent renovation – actually, a complete redesign – was carried out by Greg Turner and Scott Macpherson in 2013, turning the course into a fine parkland course for private members. It’s built on an ancient riverbed, but thousands of mature trees and birdlife, several creeks and a large lake have transformed it. The 6,601-metre course is known for the par 5 4th hole, with a split fairway on either side of a stream. 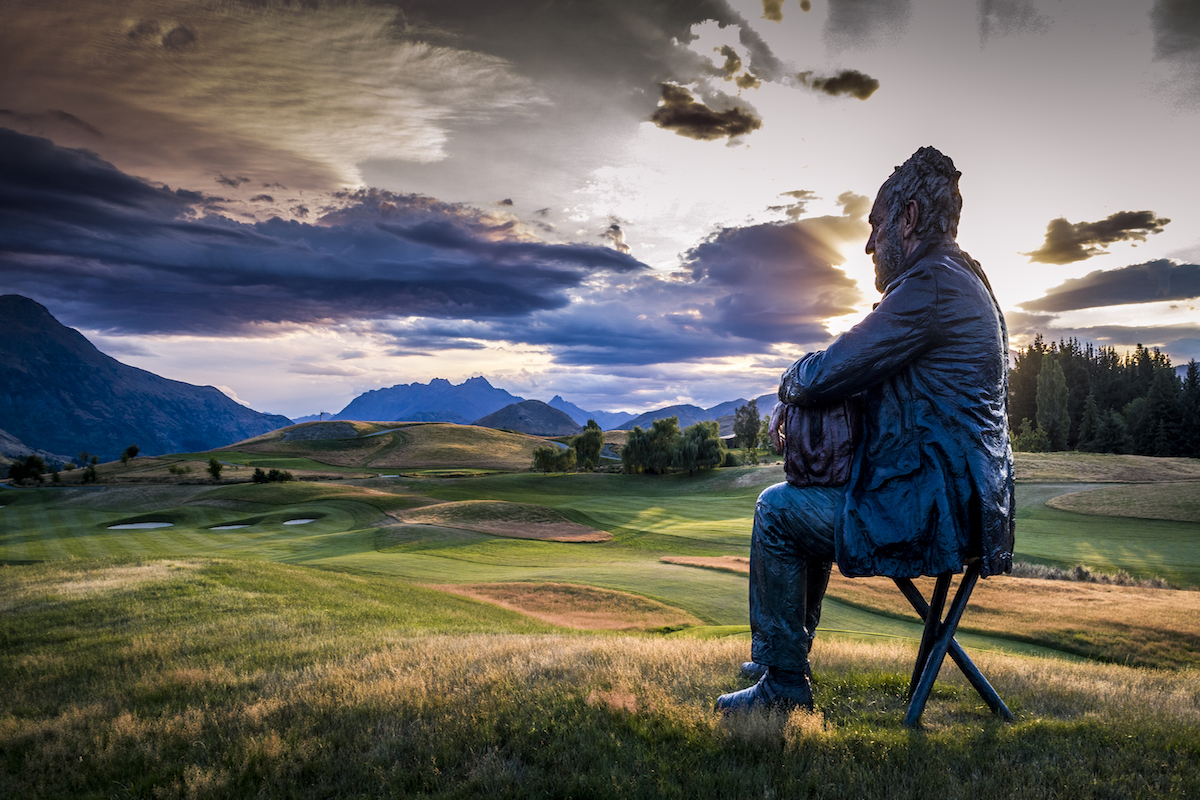 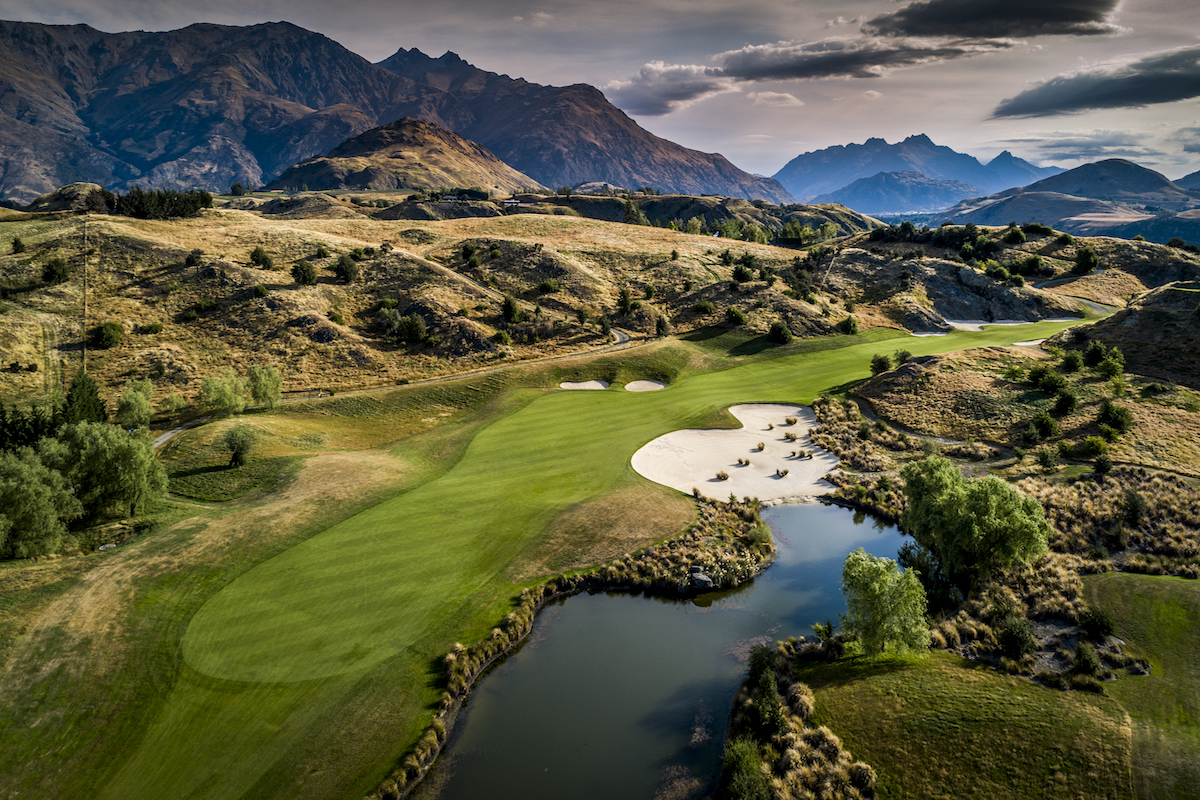 Situated at Arrowtown, close to Queenstown in the South Island’s Otago region, this 6,596-metre, par-72 links course is the setting for the NZ PGA Championship. Built on over 100 hectares that was previously a deer farm, the glacial valley delivers sensational views of mountains surrounding the course and town.

The Hills has a reputation for its waterways, 10 lakes and various ponds, providing heartache for those who can’t hit straight. Native grasses and tussocks add to the challenge if you miss the fairways.

Adding to the drama and spectacle of The Hills is a series of sculptures by Kiwi artists throughout the course.

A clubhouse, designed by Andrew Patterson, and luxury resort accommodation make The Hills a complete package for golfers looking for something out of the ordinary in their golf holiday.

This is but a snapshot of the many fantastic courses available to visitors to New Zealand. Whatever your preference in golf courses and apres-golf activities, the Kiwis can accommodate you. It’s easy to plan an island-hopping golf adventure, or simply decide on one area and choose from a wide variety of courses and attractions nearby.

You just can’t go wrong – find out why more Kiwis play golf than any other sport.

Explore the extravagant and challenging golf courses of Dubai.