The Captain’s Choice Antarctic Frontiers with Eric Philips trip will be held in 2019, including a private jet ride, a luxurious stay at an exclusive polar camp and of course a guided tour within the icy continent. 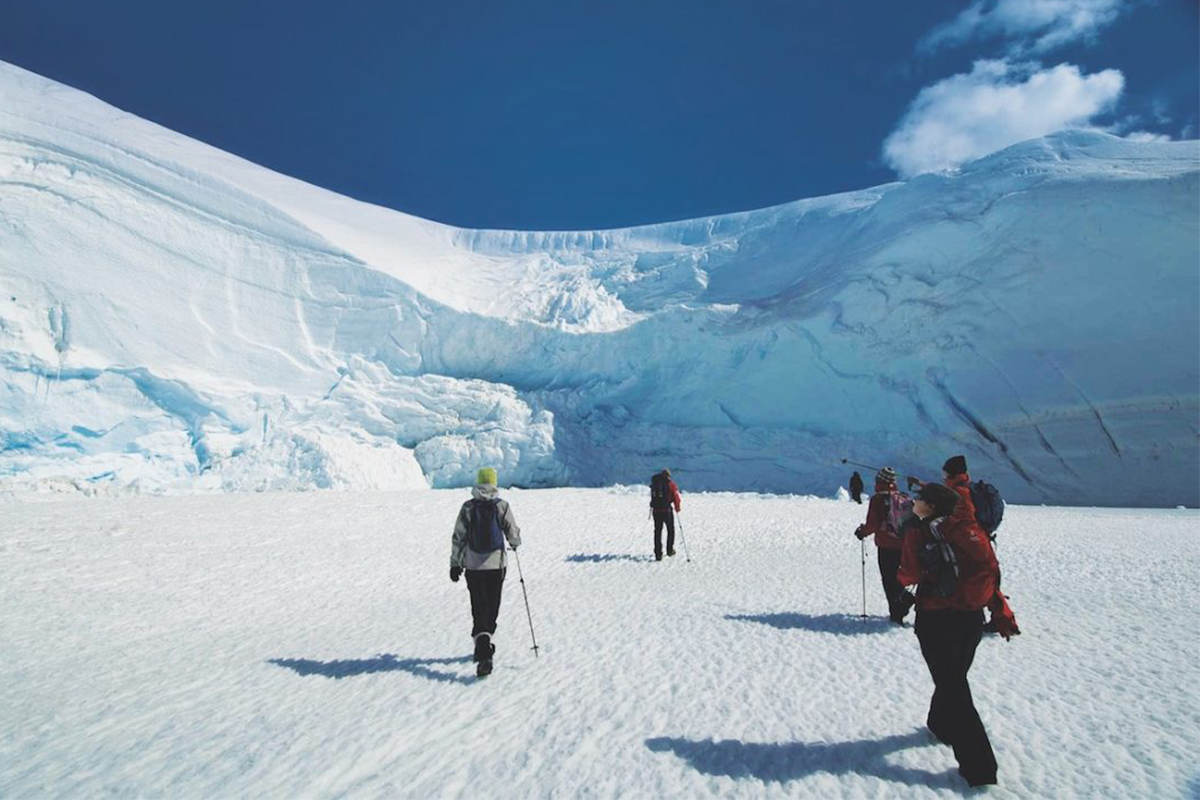 With more than 25 expeditions to the North and South Pole under his belt – including a journey co-guiding Prince Harry – acclaimed polar adventurer Eric Philips will be leading 12 guests on an incredible experience through Antarctica in 2019.

The Antarctic Frontiers with Eric Philips journey begins at the opulent Cape Grace Hotel in Cape Town, South Africa. Guests will then be whisked away by private jet to Queen Maud Land, Antarctica, and the exclusive polar safari camp, Whichaway Camp. The camp is powered completely by solar and wind energy and is equipped with a grand dining room, lounge room, library and eco-chic fibreglass luxury domes. An onsite chef will prepare three gourmet meals and champagne will be served throughout the stay.

The trip provides an opportunity to descend into sapphire blue caverns, camp in style atop the ice and witness emperor penguin chicks as they joyfully trek through their frozen surroundings.

Eric Philips has been awarded the Order of Australia for achievement in polar exploration, The Australia Geographic Society’s Lifetime of Adventure medal and is President of the International Polar Guides Association.

The CEO Magazine spoke with Eric ahead of the highly anticipated journey:

What inspired you to begin polar exploration?

I was always attracted to any National Geographic or Australian Geographic magazine featuring stories and photos of the Arctic and Antarctica, but it was my five years as Head of Outdoor Education at Geelong Grammar School’s Timbertop campus that inspired me to begin polar exploration. Year after year, I’d watch these young teenagers achieve remarkable things such as engaging with the rugged High Country in unguided groups for days on end, and their spirit of adventure inspired me to pursue my own dreams.

What do you enjoy the most about your expeditions to both the North and South Pole?

Undoubtedly the best part of North and South Pole expeditioning as a guide is facilitating people’s often lifelong ambitions to visit the ends of the earth. I know those ambitions because I harboured them for years before finally skiing to 90 degrees north and south. Despite now having been over 25 times to both poles combined, none of the shine has worn off. They are still very special places symbolically because every line of longitude passing under every person on our planet starts and ends at a pole. Get ready to experience the wonder of Antarctica

What has been your most exciting expedition so far and why?

I’ve had many exciting expeditions since my inaugural polar mission in 1992 to Ellesmere Island in Canada. I’ve had the privilege of pioneering three new routes to the South Pole and, last year, guided a 16-year-old Melbourne girl on a new unassisted and unsupported route from the Ross Ice Shelf via the untrodden Kansas Glacier to the South Pole – 585 kilometres in 37 days.

It was also a memorable experience co-guiding Prince Harry to the South Pole in 2013. But perhaps my most exciting adventures were skiing across the frozen landscape of Svalbard with my daughter and taking my family to Antarctica including Mawson’s Hut in 2008 when my kids were just four and 10.

“It was also a memorable experience co-guiding Prince Harry to the South Pole in 2013.”

What are some of the biggest lessons you’ve learned from your expeditions?

The biggest lesson I’ve learned is that, despite blizzards or temperatures of -40, one does not need to be uncomfortable while skiing to the poles. A savvy blend of skills, techniques, diet and equipment, together with maintaining a sacrosanct eight hours sleep per night, ensures that one cannot just survive and exist but thrive and persist.

What is a personal mantra you live by?

It’s a mantra that started to take shape back in my days in outdoor education and one that helped launch me into professional adventuring: Dream big. Live bigger. Begin! You will be guiding a team of 12 guests to Antarctica with Captain’s Choice in 2019. What do you hope guests will get out of it?

My hope is that all the guests will return with two achievements. The first is to feel that they have lived bigger by undertaking and completing this incredible journey to one of the most beautiful but exacting environments on Earth. The second is to recognise that they will have become stakeholders in the future of Antarctica.

The single most important advancement for the long-term future of Antarctica is our handling of climate change. If we as planet inhabitants can band together to stop global warming then Antarctica stands a very good chance of remaining a stunning and important natural wonder for countless generations.

Every visitor to the icy continent has a responsibility to share with others its inherent beauty and encourage others to live wiser in order to preserve it.

What is next for you in the future?

As always the future is very exciting. I have effectively retired from long-distance ski expeditions but I am gladdened by the fact that my daughter is very keen to take up the mantle. She’s currently finishing a Master’s in Education following a degree in Outdoor Education and has my penchant for cold, ice and education.

Also, as President of the International Polar Guides Association I am invested in the development and preservation of world-class polar guiding. I truly hope that my passion for all things polar will be noticed by the 12 Captain’s Choice guests in my charge as we explore Antarctica’s frontiers.

The journey departs on 26 November 2019. To find out more, head to captainschoice.com.au.

Planning your next luxury holiday? Take a look at these three coastal destinations.