The ultimate culinary and wellness guide to Mauritius

Mauritius – a melting pot of African, European and Asian flavours. 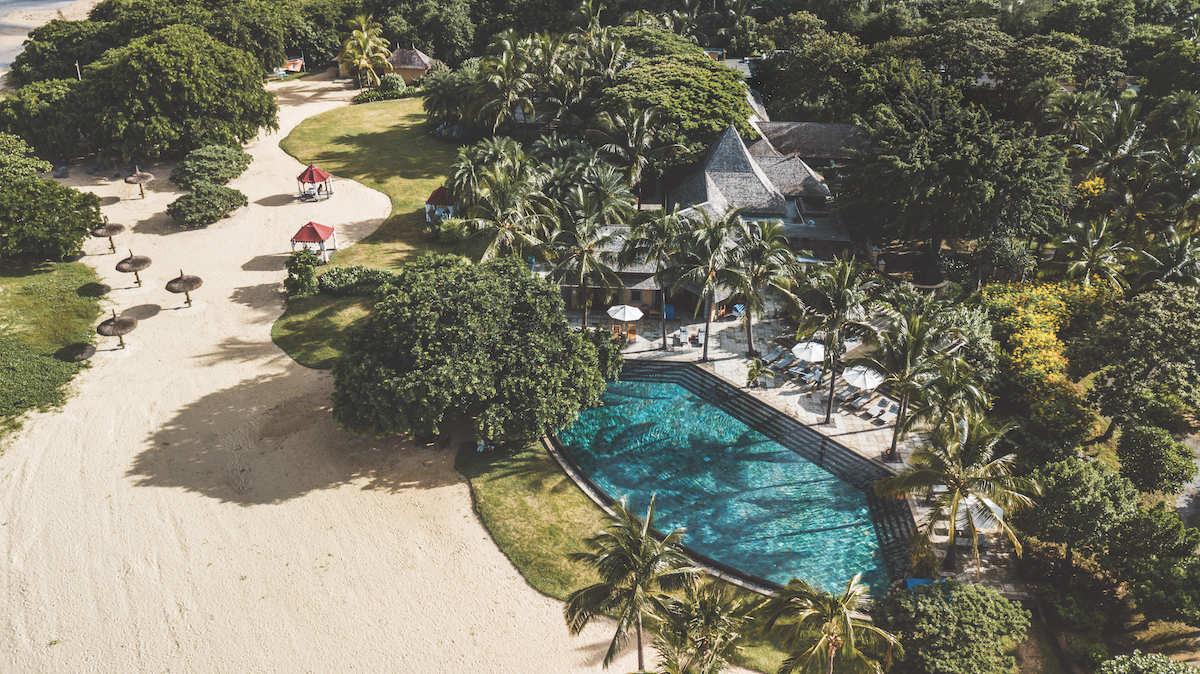 Submerged in the azure Indian Ocean, an atmospheric melody I’m imagining was orchestrated by mermaids fills my ears as we slowly glide through the water approaching the site of the Star Hope shipwreck. It’s one of dozens of ships scuttled off the coast of Mauritius to create “five-star fish hotels” says our submarine captain, Samuel.

It’s not every day you find yourself at 35 metres below sea level, exploring the depths of the ocean in a submarine. In fact, it really is a rarity, with just 12 tourist subs in the world and the Blue Safari Submarine tour I’m on being the only one in the Indian Ocean.

It’s a calm and dreamy feeling to be in the small 10-seater vessel, where everything is cast in a strange blue light as the colour absorption changes the deeper we go.

I spend most of the 45-minute trip with my eyes glued to the porthole, taking in the real-life tropical aquarium as patterned fish dart in and out of softly waving coral, incredible schools of shiny silver trevally flash by and graceful sea turtles gently float past. 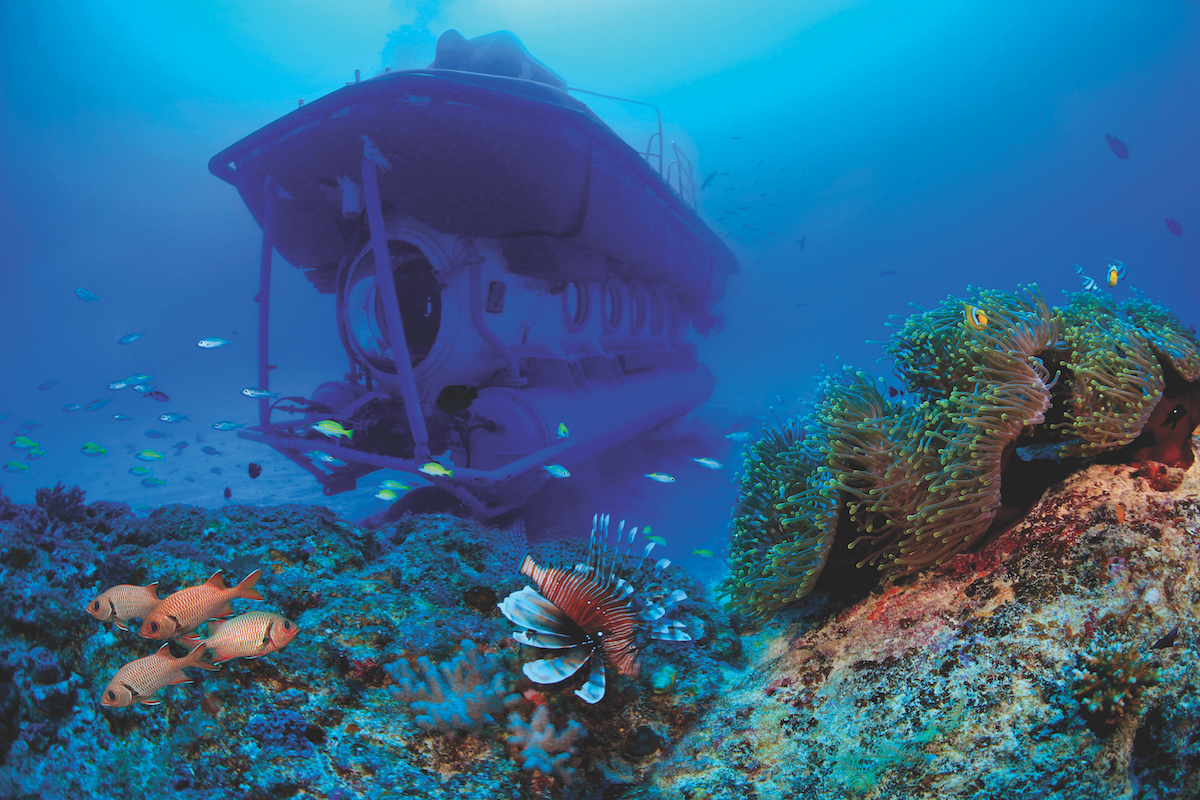 It’s not every day you find yourself at 35 metres below sea level, exploring the depths of the ocean in a submarine - the only tourist sub in the Indian Ocean.

Back on the surface, the reality of my surroundings is no less beautiful as we swap submarine for speedboat and glide back to the postcard-perfect white sandy shore, sandwiched between turquoise water and jungle-covered volcanic mountains.

Our morning under the sea is just one of many experiences that make a trip to Mauritius unforgettable. Located off the coast of Africa, this tiny island nation is famous for its 330 kilometres of coastline broken up by beaches, lagoons and reef, and deservedly referred to as the Pearl of the Indian Ocean.

It’s fascinating, 400-year-old human history has created a cultural melting pot where Creole, Indian, French, British and Asian influences permeate everything from the cuisine to the architecture, to create a tantalising place all its own.

“Mauritius was made first, and then heaven; and … heaven was copied after Mauritius,” – Mark Twain

To get a sense of Mauritius away from the pristine beaches, we venture to the capital, Port Louis. We wander past 18th-century French colonial buildings in the old town and see the stately white Government House, before ducking into the bustling central market, jammed with stalls and people.

Pyramids of pineapples, mounds of chilies and bundles of bananas are sold alongside everything from dried vanilla beans to clothing to homewares. 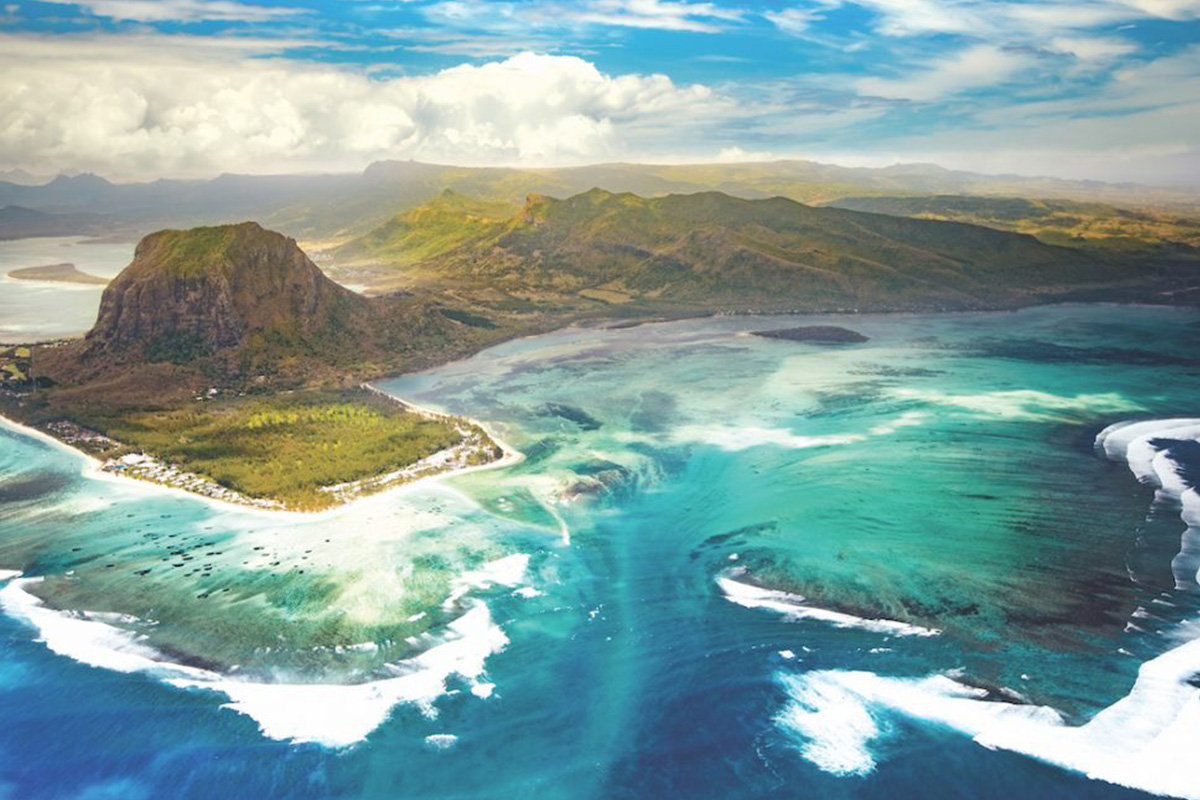 Skipping the tempting street food– think Creole curries, sugarcane juice, preserved pineapples, and samosas – we drive back down the island’s west coast for half an hour to our luxurious digs, Maradiva Villas Resort and Spa.

Located near Flic-en-Flac on a secluded beachfront in the Black River area of the island’s south-west, Maradiva is another slice of paradise. The five-star, villa-only resort is owned by a Mauritian family and is the only one of its kind on the island.

Dotted among 10 hectares of lush gardens, each of the 65 decadent villas has a private plunge pool and daybed, outdoor lounge area, and an enormous bathroom the size of a small apartment.

The bathroom comes complete with walk-in robe, huge bathtub and two showers – one glass-walled so you feel as though you’re showering in the private tropical garden, and one in the tropical garden for those who like to shower underneath the sun or moon.

The villas are spacious but the opulence is understated; the focus is on discreet luxury and impeccable service. Fresh fruit and other tasty titbits, a newspaper, and Dalai Lama quotes left by your bedside are the kind of thoughtful daily flourishes one could get used to.

Having touched down in Mauritius the previous day, our group was swiftly transferred to the hotel in a Rolls-Royce Ghost and Phantom. Once in the private oasis of Maradiva, after being welcomed with smiles, fresh ginger-and-lemon drinks, and enveloped by the relaxed yet luxurious ambience, it’s certainly hard to leave.

I can’t deny the seduction of the place, which is unsurprisingly popular with couples and honeymooners as well as celebrities, who are drawn to the privacy and service of the villas as much as their stunning location, and wellness and culinary attractions. 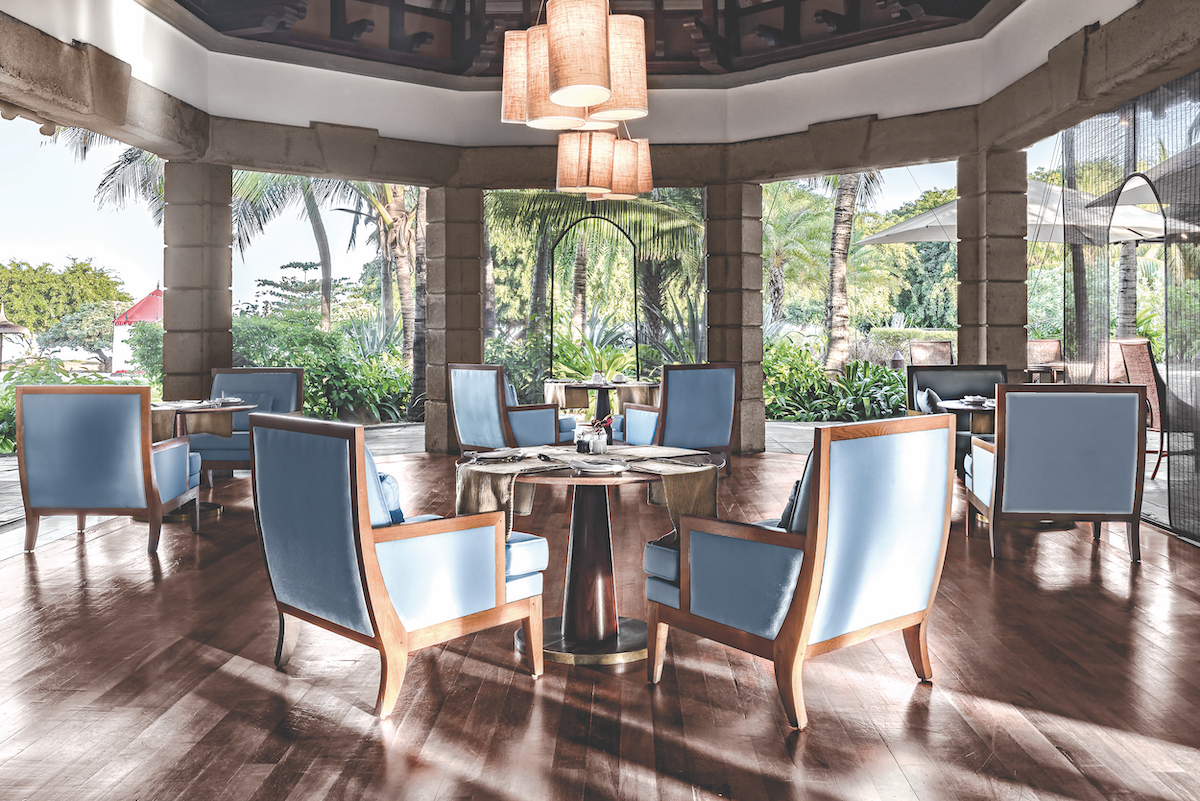 Daily buffet breakfast is offered in the open Coast2Coast restaurant, surrounded by gardens and a lawn that stretches all the way down to the sandy beach at Maradiva Villa Resort and Spa.

As well as in-villa dining and a beachside picnic option, there are three restaurants to choose from at the resort. Part of the appeal of staying somewhere like this, we realise, is that we get the choice and service of a resort, with the space and luxury of a private villa.

Keen to experience the spices and flavours of India that has so influenced Mauritius, we opt for dinner at Cilantro on our first night.

While golf carts are available to guests to get around the grounds, it’s a warm evening and I choose to wander the romantically lit garden paths by foot.

The aromas lure me in and our group is not disappointed by the authentic, rich flavours of the Indian cuisine and Cilantro’s romantic setting. A ginger crème brûlée and after-dinner cocktail in the lounge make for the perfect finale.

Daily buffet breakfast is offered in the open Coast2Coast restaurant, surrounded by gardens and a lawn that stretches all the way down to the sandy beach.

Under a high-ceilinged pavilion, seated on dark timber rattan chairs, we feast each morning on fare that features everything from fresh fruit and pain au chocolat, to local dishes including rice, chutneys and curries. Fruit juices of your choosing, eggs and delicious hot crepes can all be whipped up when and how you like them. 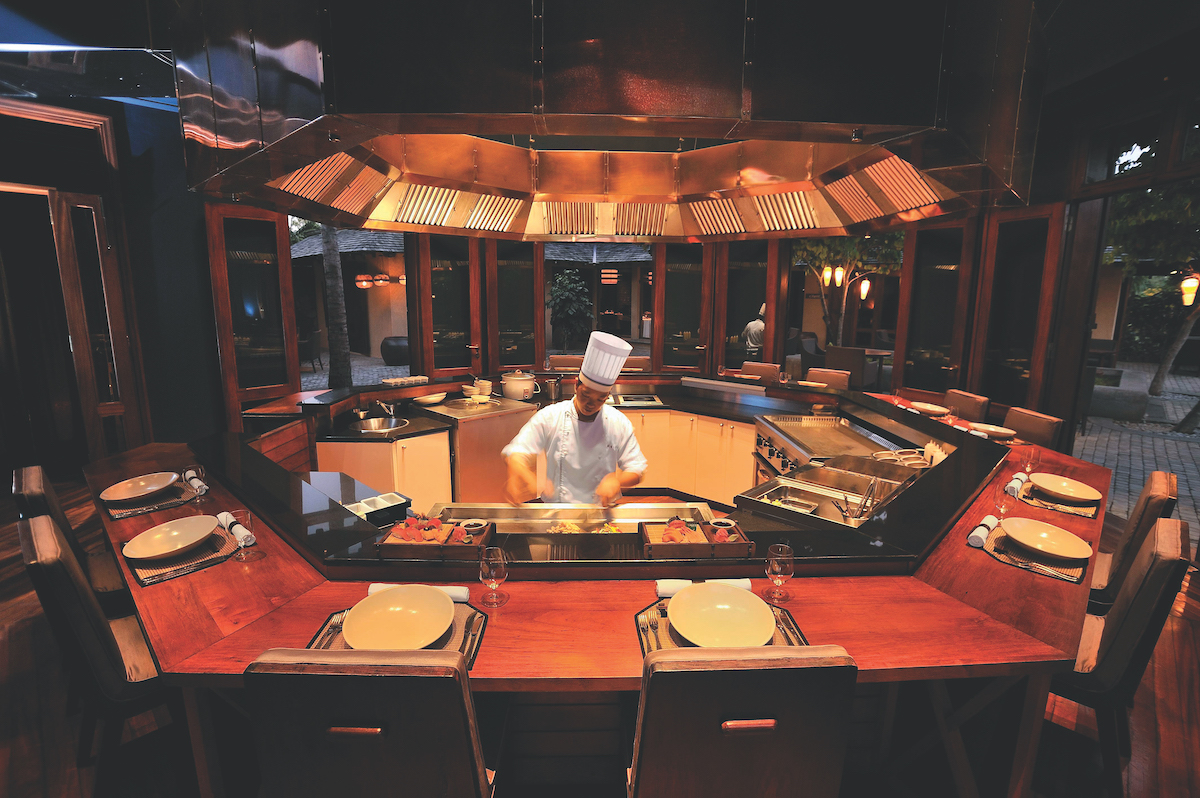 Seated in an octagon around the chef and his hot plates, we are treated to a degustation at the Japanese Teppan - a teppanyaki restaurant.

The third option is the Japanese Teppan which, as the name suggests, is a teppanyaki restaurant. Seated in an octagon around the chef and his hot plates, we are treated to a degustation.

A vegetable soup appetiser is followed by melt-in-the-mouth fresh sashimi and a lime sorbet palate cleanser before the theatrical teppan display begins. With lightning-fast swishes of knives and bursts of flames our food is expertly tossed from hotplate to dinner plate. Matching wines and a trio of desserts add to the memorable evening.

The next day, I visit the spa for an Ayurvedic consultation with Dr Praveen before a traditional oil massage. An ancient medical practice, Ayurveda is deeply rooted in Indian culture and is therefore part of the Mauritian heritage too, and the health and wellness focus of Maradiva.

The level of wellness focus is up to the guests and free yoga is also offered once a week. As someone new to Ayurveda, I find the consultation fascinating and leave with new knowledge of Ayurvedic body types and wellness habits to consider as I make my way to one of the tranquil treatment rooms for my massage.

With a series of pagoda-like structures, cascading pools and treatment rooms that open onto private garden courtyards, the spa is a soothing place. Instructed to let the oils sink in for a couple of hours, I bliss out on a sun lounger under a frangipani tree by the pool before meeting up with our group for our next activity.

Still rather oily, I meet chef Rakesh at Karo du Chef, Maradiva’s impressive organic kitchen garden where the delicious fresh produce for our meals is lovingly grown and harvested. 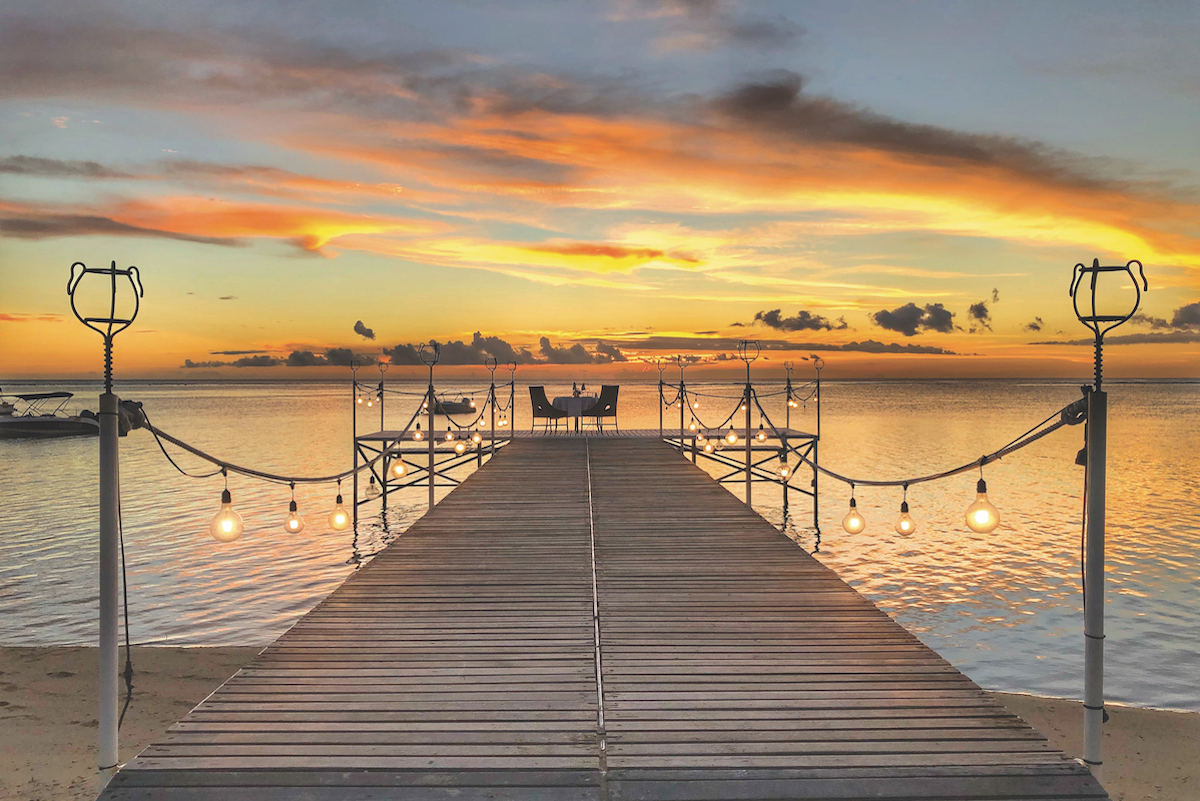 “Mauritius was made first, and then heaven; and … heaven was copied after Mauritius,” Mark Twain said after his visit in 1896.

We’re here for a Mauritian cooking class and, after a tour of the grounds, put on aprons and get started. We learn more about the traditional spices and ingredients of the local cuisine and, under Rakesh’s guidance, cook a classic chicken curry, a palm heart salad and fruit skewers in syrup for dessert.

After an indulgent afternoon spent sampling cocktails from the poolside bar and lolling by the edge of the infinity pool admiring the sunset, I recall how a local had described this experience: “West is best over here.” With sunsets like this, I see what was meant.

Our days here have been as adventurous or as lazy as we wished. You could whip across Tamarin Bay on a James Bond-esque speedboat and hike past waterfalls up a jungle-clad mountain, or simply enjoy private service on a sun lounger by the sea.

Mark Twain made famous the local sentiment: “Mauritius was made first, and then heaven; and … heaven was copied after Mauritius.” Twain added, after his visit in 1896: “This is the only country in the world where the stranger is not asked ‘How do you like this place?” And as I stand under the outdoor shower in my private courtyard, surrounded by lush tropical foliage, washing the sand and salt from my hair with the Hermes toiletries provided, I consider the past few incredible days spent in the pearl of the Indian Ocean and decide that, yes, perhaps this is heaven after all.