Inventive eco-friendly water toys to use with your superyacht

A new wave of eco-friendly superyacht toys has arrived – and they channel 007 while ditching fossil fuels. 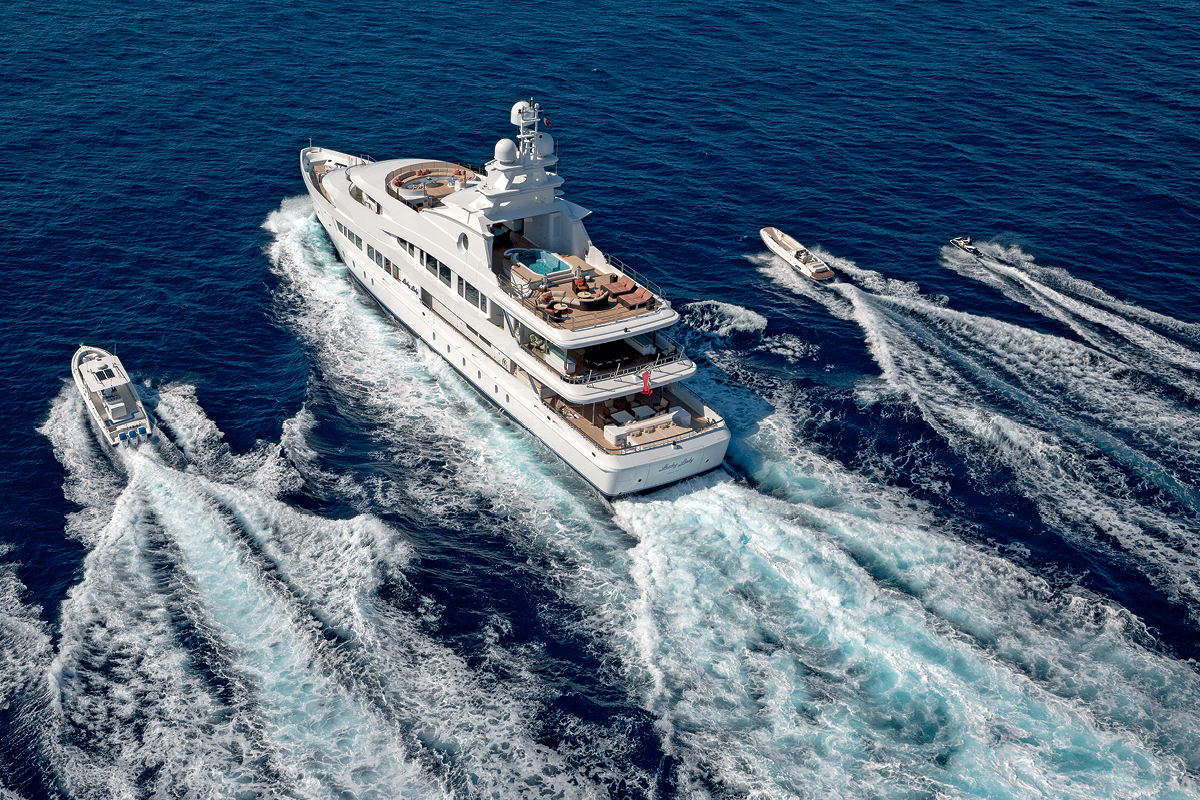 From water-friendly golf balls to superhero-inspired jetpacks, 007-inspired water toys are getting an eco-overhaul. The future of yachting is green after all.

“Yachting is moving in a greener direction and clients are increasingly aware of the impact of their yachting activities on our oceans and the planet,” she explains.

It’s a sentiment echoed by the yacht brokerage’s CEO, Raphael Sauleau, in a recent Wealth-X report, ‘Luxury Yachting Market: Five trends influencing the global yachting industry’. “All sectors are involved (in sustainability initiatives), from the paint manufacturer to the engine supplier,” he says.

With a product selection that spans from electric surfboards to oversized inflatable slides, superyacht tender and water toys have always been the fun side of the industry.

A new wave of water toys is hitting the market that manages to combine old-fashioned thrills with eco-friendly credentials. While it’s hard not to marvel at the technological ingenuity behind electric jetskis and energetic waterbikes, sometimes it’s the simplest ideas that are the most enduring.

“For the past few years, there has been a growing trend for eco-bio golf balls that allow clients to tee off from the yacht into the ocean without any environmental consequences,” Daniela continues.

We’ve dived into the world of ingenious water toys, sharing five businesses scoring a hole in one with their sustainable innovations. 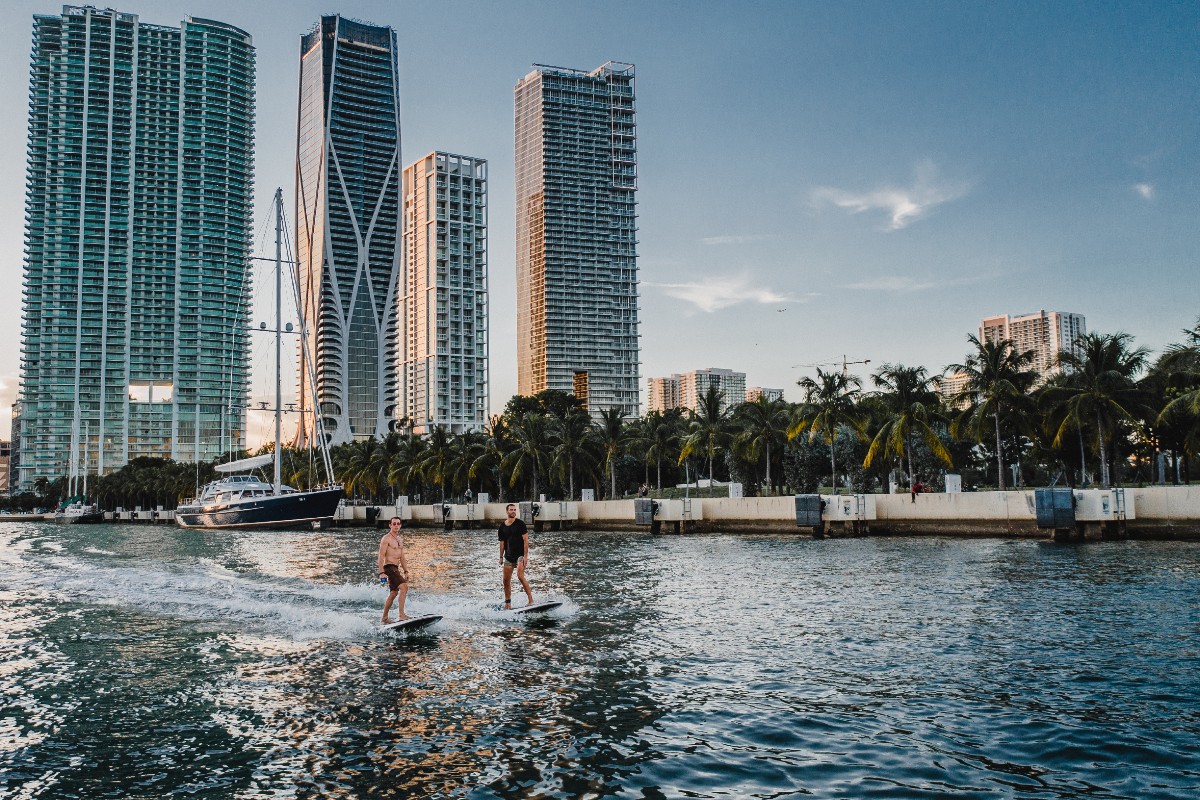 The Financial Times has called electric surfboards “the jet set’s new joy ride” and there’s no doubt that a jet board, as it is also known, is the latest must-have accessory in every superyacht’s toy box.

While there’s no shortage of choice on the market, Swedish startup Radinn has been making waves thanks to a modular design that allows you to adapt the board to your skill level and intended use: explore (for beginners); freeride (which is “easy to learn, challenging to master”, according to its makers); and carve (for advanced riders).

Built around an electric jetpack and controlled via a handheld, wireless remote, this silent eco-ride cuts through the noise of its petrol-powered rivals and guarantees long-range action thanks to top speeds of 56 kilometres per hour and a powerful battery pack. 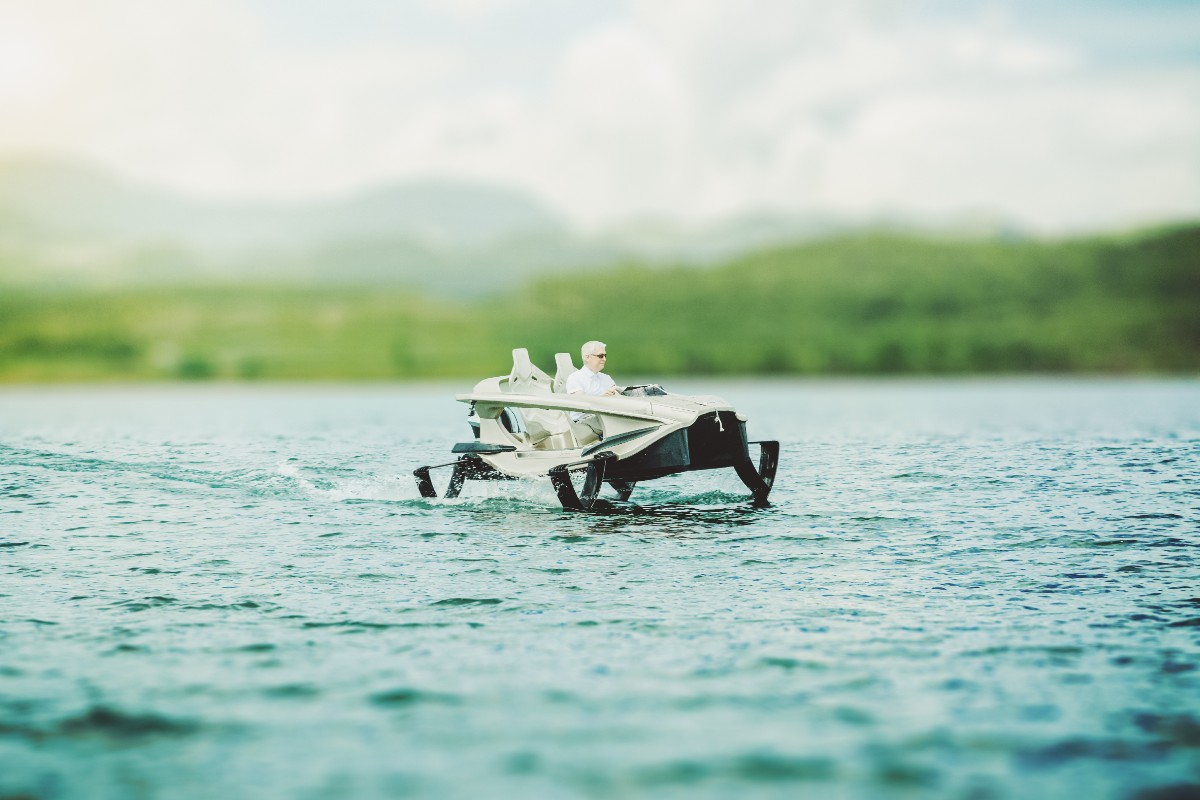 When a Formula One world champion has been snapped behind the wheel of your electric hydrofoil (as Nico Rosberg was in Ibiza last European summer), describing it as a “sports car” for the water seems more than appropriate.

No doubt the now-retired German driver felt at home with the interactive race car steering wheel and sleek, state-of-the-art design. Adrenaline junkies, whether professional racers or not, have the team of engineers and nautical enthusiasts at Quadrofoil to thank for a futuristic water toy unlike any other on the market.

The Slovenian company’s Q2 range of hydrofoiling watercraft needs to reach just 12 kilometres per hour to fly over bodies of water such as lakes, rivers and bays, but there’s plenty more room to accelerate with top speeds of 40 kilometres per hour.

Battery-powered and with zero emissions and almost zero noise pollution, these watercraft can be enjoyed in protected zones where motorised vessels are forbidden – making it the perfect companion to expedition cruising in remote corners of the world. 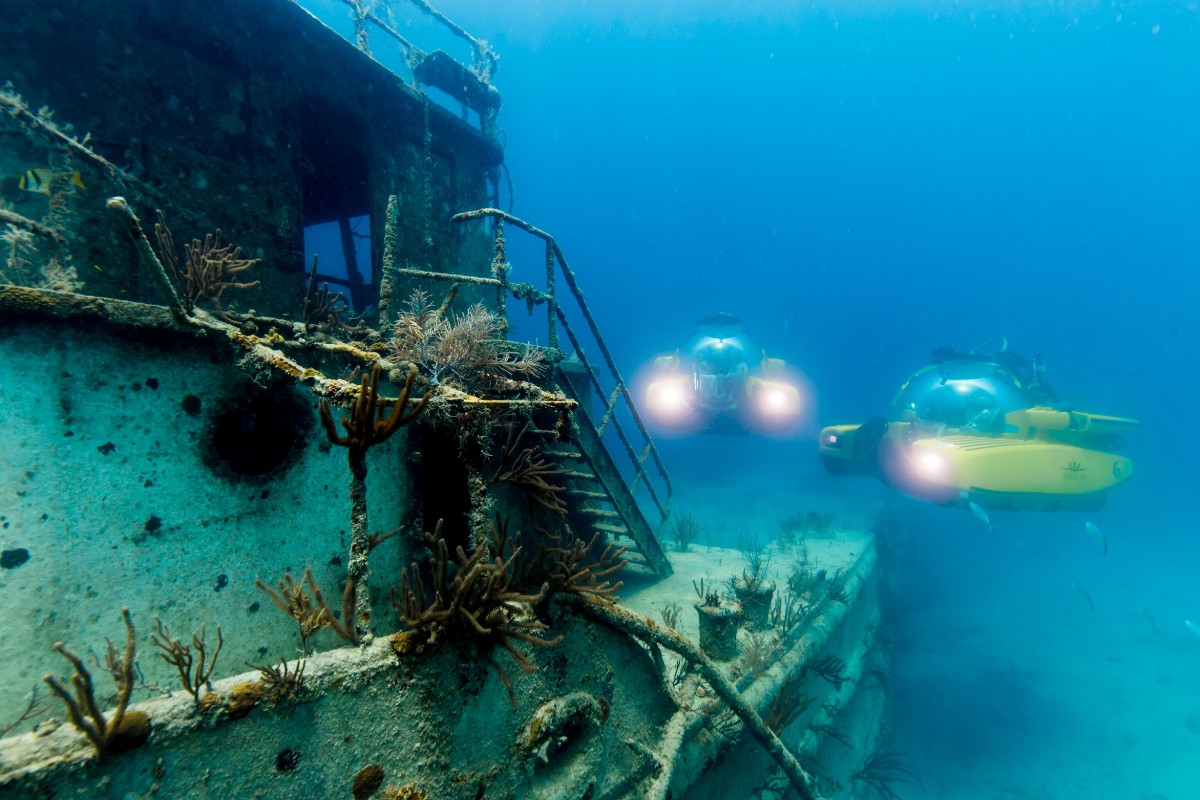 While its partnership with Aston Martin for the limited-edition Project Neptune model has only strengthened Triton Submarines’ enviable position atop of every yacht owner’s toy wishlist, sustainability has been at the core of the civil submersibles business since day one.

“In terms of environmental impact, subs are completely non-polluting; they are virtually silent, there are no emissions and all consumables are naturally occurring gases and minerals,” Triton’s Craig Barnett explains.

Yet there’s a wider angle to consider: the role these battery-operated ‘toys’ play in raising awareness of the world below the waterline. “Subs like ours are such a platform to increase public engagement with the marine environment,” he continues.

From taking Sir David Attenborough and his team to the depths of the ocean floor for Blue Planet II, to the more than 40 marine species its innovations have helped discover, each sub “acts as a catalyst for understanding more about our oceans and how we can protect them for the future”, Craig explains. 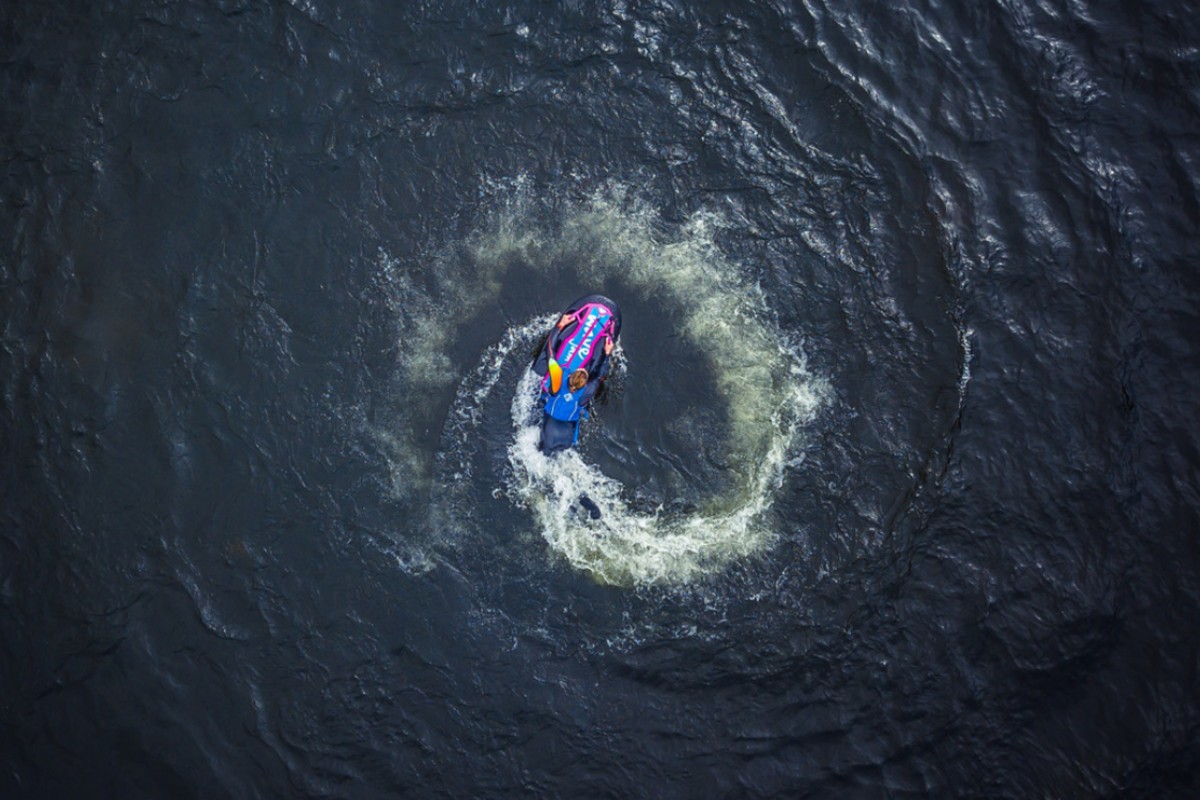 Asap Water Crafts’ Wave Jam is the ultimate university project come good for Ross Kemp, the company’s Founder. “It kind of evolved from my student days when I saw an opportunity for something that had power, but that was quick to launch and that one person could pick up and throw in the water,” he explains.

The original intention was to design a rescue product but, somewhere along the way, he realised his innovation was also a lot of fun. After a few modifications, the safety craft also became a pleasure craft and clients now include national fire and rescue departments and yacht brokers.

“The main difference between the two is that you can drive the rescue model one-handed so that you can grab someone with your free hand, whereas with the Wave Jam (leisure) version you have to have both hands on the throttle,” he says, adding that both share the same speed and power.

Although marketed as an electric jet board, the riding position is closest to bodyboarding, as is the sensation when you catch a wave. “What I love most about the experience is the feeling of being blasted through the water,” Ross enthuses.

The intention was always to bring to market a battery-powered product for simplicity, ease of maintenance and cost – but the silence means our boards fit in nicely where noisy motors have been banned,” he grins. Sustainability was at the forefront of Kristian Hunter’s mind when founding Yacht Golf. “I wouldn’t have done it otherwise,” the Hong Kong-based entrepreneur acknowledges. His luxury golf events business was inspired by gatherings he had organised on Sir Richard Branson’s Necker Island, where it had been imperative “to find golf balls that wouldn’t pollute the ocean”, as he explains.

Enter Albus Golf, whose EcoBioBalls are single-use, biodegradable golf balls with fish food at their core. The Barcelona-based business has become the ideal partner for its Yacht Golf days and personalisable Yacht Golf kits, which are set to be released later this year.

What’s the attraction of playing golf on a yacht? “It’s a unique experience,” Kristian explains. After all, most people have swung a golf club – but not necessarily on the water.

“It’s enjoyable for everyone, not just serious golfers. After all it combines two luxury pastimes in one!” And it’s all the sweeter given its role of nourishing underwater life.