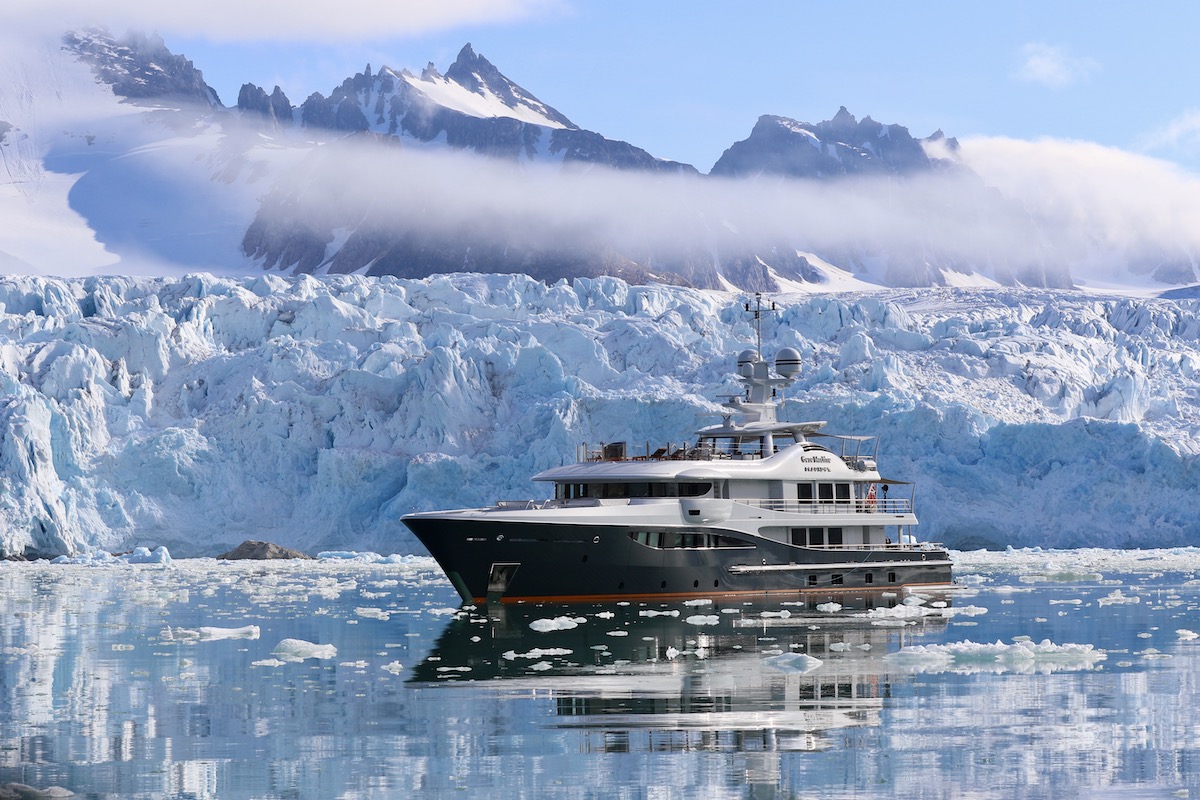 With a name like Gene Machine, the 55-metre Amels superyacht launched in 2013 isn’t your average luxury vessel. Yes, it comes with a sundeck jacuzzi, beach club and a garage full of water toys. And it spent last New Year’s Eve jostling for an anchorage with the rest of the yachting fleet outside Gustavia harbour in St Barts (the coronavirus scuppered its traditional visit to the Cannes Film Festival and Monaco Grand Prix this year).

Then there’s the upper-deck salon-turned-science lab, a much more unusual amenity to find on a pleasure craft. But whenever Dr Jonathan Rothberg, its American scientist and entrepreneur owner, is on board, the line between business and leisure blurs. “He’s always got some sort of tech going on,” explains Matthew Gow, Gene Machine’s captain.

Best known for his work in high-speed, low-cost DNA sequence machines, Dr Rothberg was one of the few owners able to lockdown on his superyacht (the figure is widely believed to have been between three to five per cent). Between helping his children keep up with Zoom classes and piano lessons, the scientist’s attention quickly turned to developing a rapid COVID-19 home-testing kit from the confines of his floating laboratory.

“Very early on, before the United States had really kicked off, our owner started to recognise that we were facing a global pandemic,” Matthew, from British Columbia, Canada, explains. “Every evening, he and I would study the numbers from Italy and China, and I remember just how quickly it was all getting out of hand.

“We’ve since stopped because it has become too depressing, but right away he started researching into producing a testing kit.”

A testing kit for testing times 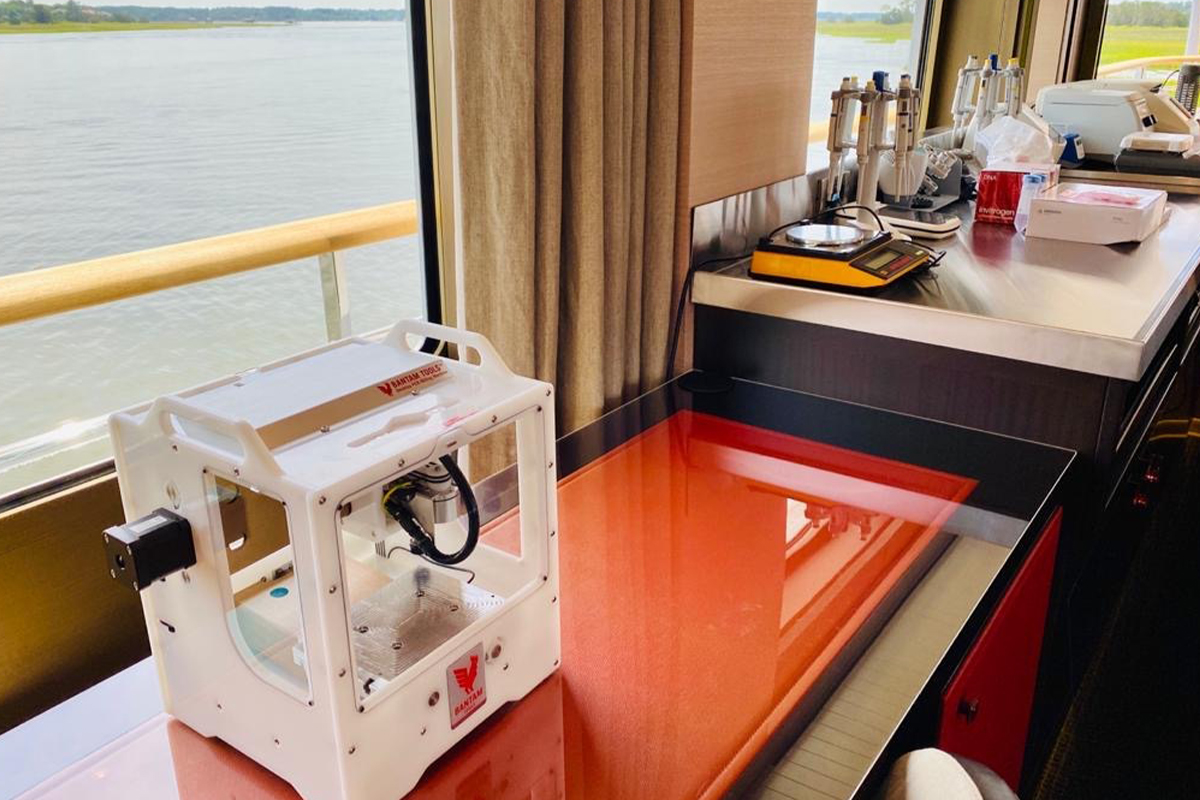 The founder of life science and medical device companies such as Butterfly Network, Homodeus Inc and Hyperfine, Dr Rothberg’s mission is to democratise medicine: along with the fast DNA sequencing equipment, other innovations include Butterfly iQ, a portable ultrasound device that displays images on a mobile phone and the world’s first portable MRI machine developed by Hyperfine.

Since the start of the pandemic, he’s made no secret on social media of the need for rapid testing that determines if someone has, rather than has had, the virus – the problem with much of the antibody testing that has flooded the market. His focus has been on developing a nucleic acid test, which uses genetic rather than antigen detection.

“The goal is to be able to hand a swab to someone and after 15 minutes have the results,” Matthew explains. On a personal level, it will enable any visitors and crew to be tested before being allowed to board the vessel.

The superyacht captain says Dr Rothberg has been working “pretty much seven days a week” with his team at Homodeus to develop a kit. At the start, he was alone on board but recently Isaac Bean, a biologist “intern”, joined the yacht in Thunderbolt, Georgia, in late May. Isaac’s arrival coincided with the delivery of equipment such as a 3D printer, robotic pipetting machine, laser cutter/engraver and other materials for the project. “That has allowed them to prototype the test kit without having to visit his labs in Guilford,” Matthew says.

In collaboration with the team at Homodeus, the duo has made quick progress, as a read through Dr Rothberg’s Twitter feed will tell you. In only a few months, what the scientist describes on the social network as a “one-tube, rapid, sensitive, at-home nucleic acid-based test for any pathogen” has been developed, which uses a nasal swab and transmits the results via a mobile app.

“Homodeus is working hard to roll out the tests,” Matthew explains. At the time of writing, it was still in the research phase, yet to receive FDA approval.

Life under lockdown on a superyacht 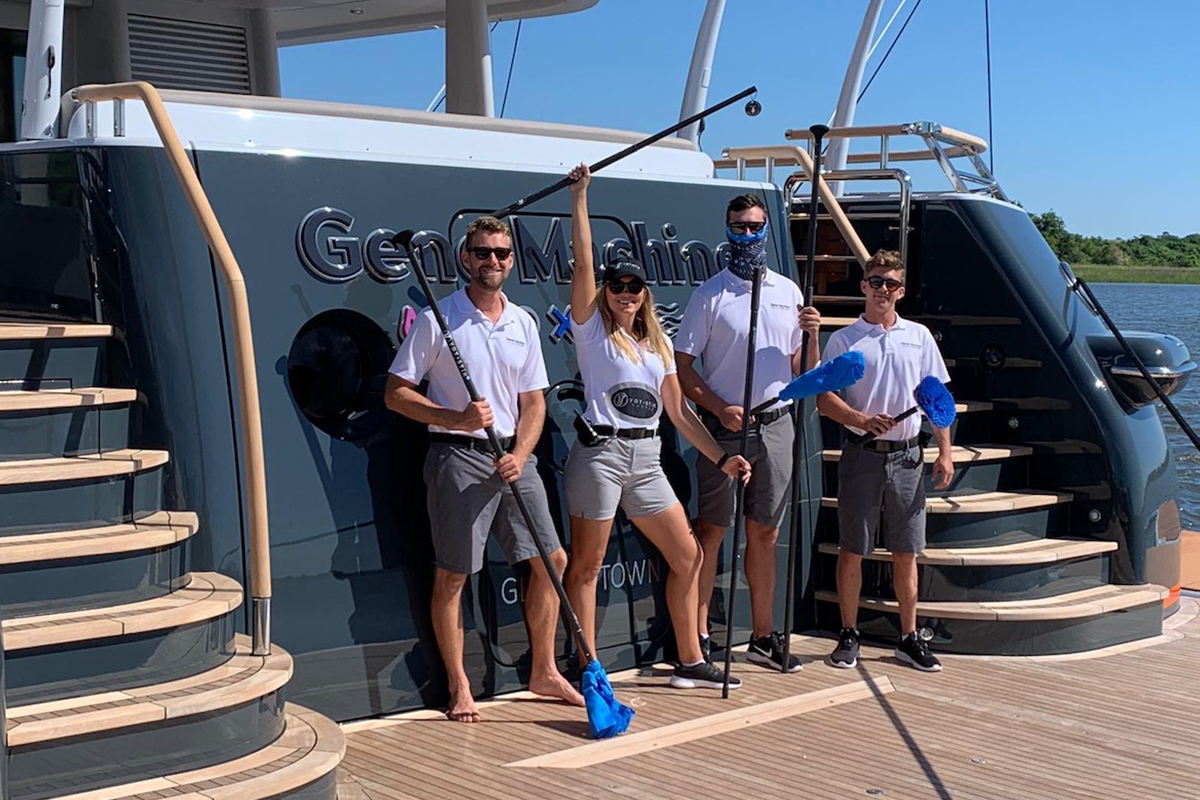 For Matthew, who took over command from his twin brother Fraser in December, it has been quite the eventful start: this is also his first captaincy, having spent the previous eight years as chief officer on the 86-metre Oceanco superyacht Seven Seas. “I crossed the Atlantic on Seven Seas, jumped on a flight to St Barts and arrived a few days before the owner came on board in December for Christmas and New Year’s,” he explains. With barely a handover (the relief captain had already left), and having never driven the vessel before, he says he “was lucky to inherit a fantastic team who supported me through those first few weeks”.

Just a handful of weeks later, Dr Rothberg and his family returned for what was expected to be a two-week trip in the Bahamas. “Suddenly, we were on full quarantine lockdown, an event no captain in the yachting fleet has ever experienced, with live aboard owners,” Matthew says. Extra provisions were brought on in the Bahamas, the beach club was turned into a quarantine zone and the yacht returned to US waters (first Fort Lauderdale, Florida, then Thunderbolt, Georgia, and now Guilford, Connecticut). 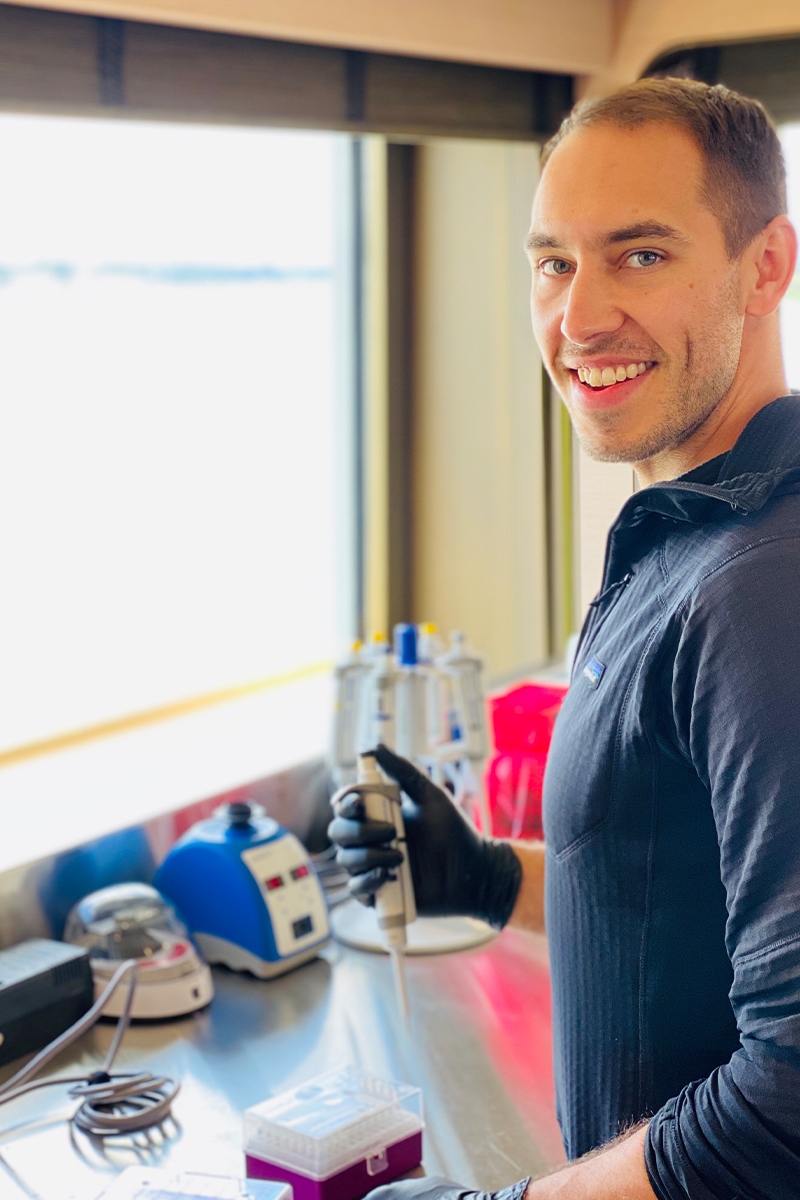 Until its arrival in Thunderbolt, the only reason the crew (which had dropped to 10 from its usual roster of 14) would go to the dock was to receive provisions. “No-one was allowed on or off and all provisions were carefully disinfected before being brought on board,” he explains. “Items that were not required immediately were left in the beach club for multiple days.” After arriving in Thunderbolt, they were still only permitted to go ashore to exercise.

Now anchored off Dr Rothberg’s residence in Guilford, Connecticut, Matthew is delighted to be enjoying certain freedoms again. “We are no longer quarantined to the vessel, which has been great,” he says. “Crew are still asked to wear masks when going ashore. We are allowed to go exercise, go to the beach, grab a bite to eat at outdoor establishments. We have two vehicles at our disposal.”

“Social distancing is still very important for us and we are continually reminding everyone to not let their guard down.” – Matthew Gow

Amid the scientific activity, Matthew says he has kept to his traditional captain’s duties. He has, however, with the owner’s encouragement, been maintaining the yacht’s social media accounts. Then there are the drones. Already a licensed drone pilot, Matthew and his second engineer (also a commercially certified drone pilot) are training other crew members to fly the yacht’s multiple drones. “It’s primarily for photography and cinematography,” he says, “But the ability to rapidly launch a drone to send samples to and from the shore has been a real time saver.” In the future, they imagine drones delivering test kits to vulnerable people, therefore, reducing the risk of virus transmission.

As an industry, yachting is often dismissed as shallow. Yet, this story is just one example of how that perception is beginning to change. For his part, Matthew is very proud to be involved in such an important project.

“I know other boats are doing some kind of philanthropy, but I don’t know of any that are actually prototyping and testing a 3D-printed COVID-19 test kit, which is fascinating,” Matthew says. “Although we can’t take credit for any of the scientific work, we can take credit for the fact that we are supporting his ability to work on board. Without the crew, he wouldn’t be here.

“We’re very lucky to have a cool owner who is making a difference.”

To keep updated with the progress of Dr Rothberg and M/Y Gene Machine, follow their social media accounts: