The stranger things that threaten Netflix

Netflix’ artistic and commercial success might not be enough to shield it from an unforgiving marketplace. Where is the fresh meat?

Is there a more admirable recent business triumph than Netflix? Founder Reed Hastings built a video distribution empire by using a subscription model for DVD rentals. Then, around 2010, he destroyed that video business, along with everyone else’s, by jumping to streaming just at the right moment. And then he started to churn out his own content, like House of Cards. Perhaps only Elon Musk has shown a similar combination of creativity and nerve.

Netflix is now worth US$150 billion. Blockbuster, its former competition in DVD, has dwindled to just a single store. Hastings’ bravery brought staggering rewards — and who would begrudge him any of them?

So now Netflix has by far the biggest share of the global subscription video on demand (SVOD) market. It had 148 million users at the end of March 2019. In Australia, according the newly released PWC Australian Entertainment & Media Outlook 2019–2023, it reaches 11 million people. It is increasingly a global service: in the first quarter of 2019, new memberships – “paid net additions”, as Netflix calls them – were almost five times as high outside the US as inside it.

In Australia, SVOD is where the growth has been – more than 30% in one recent 12-month period, according to PwC. 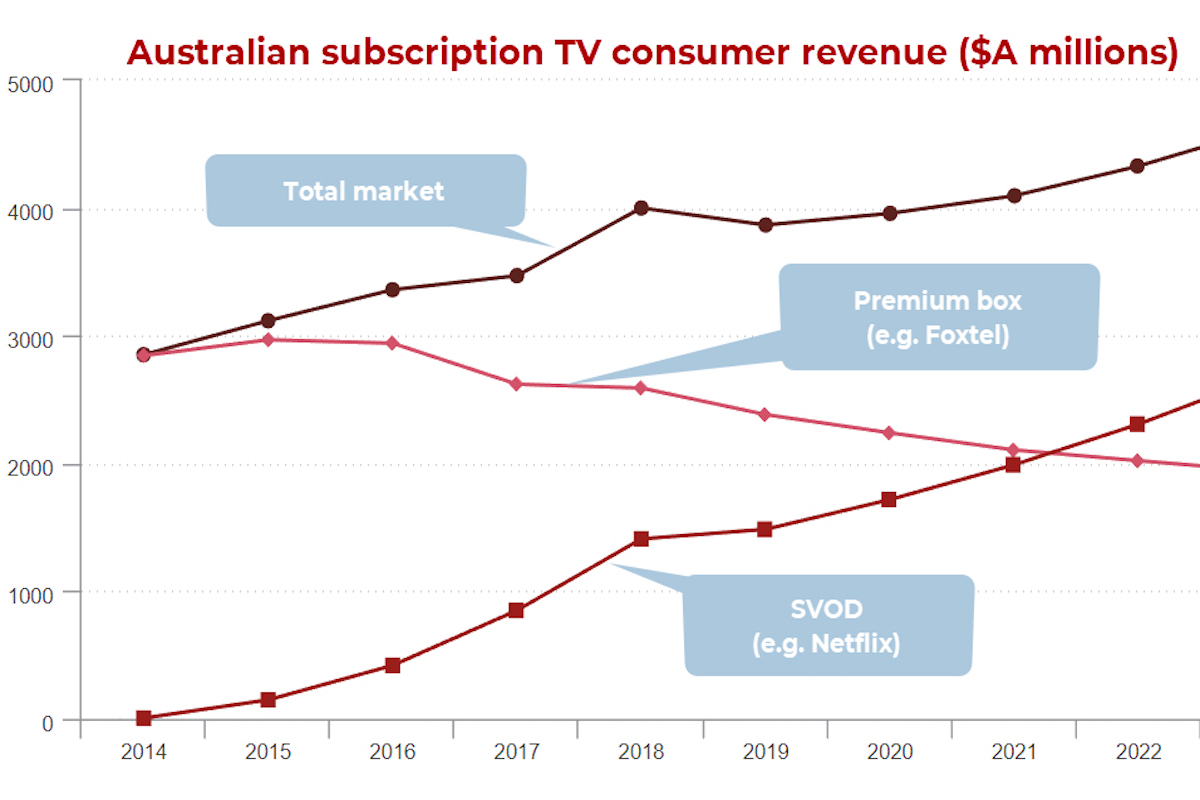 Put aside crass materialism for a minute, and think of the creativity that has been unleased. Netflix also has an ever-expanding list of astonishing new original creations: Russian Doll, Bodyguard, The Crown, Narcos, Black Mirror, and Roma, which won a Golden Globe for director Alfonso Cuarón. Oh, and Stranger Things starts a third series on July 4.

Indeed, Netflix has changed the entire face of visual entertainment. SVOD shows are now the art form people talk about, the place to find the very best. Television is to the late-2010s what painting was to 15th-century Florence.

Netflix and the fresh meat problem

Here’s the problem: Netflix and all its rivals must each produce an endless stream of new content if they are to keep viewers hooked.

Call it the fresh meat problem. When you first subscribe, the service seems like a limitless barbecue of diversions. But after a year or two, some people end up staring at their Netflix menu screen and thinking, ‘Seen this, seen that, won’t finish those – when will they have something new that I like?’ Consumers can binge their way through these sausages faster than the SVOD companies can cook new ones.

To pick an example close to home: our family signed up for Foxtel Now to watch Game of Thrones and Chernobyl We’re about to cancel that subscription; Foxtel Now just lacks enough good content to justify the monthly fee for very long, even if someone gets hooked on Big Little Lies for a month or so.

Amazon Prime? I’m watching season three of The Expanse on a free trial, and I might take a look at Good Omens. After that, the Amazon Prime subscription will end, at least for a year or so. Netflix? It might go too, once season three of Stranger Things is done.

I’m not the only one thinking that way. The question is, how many others are too?

Television from the 1970s, with its endless Hogan’s Heroes replays, might have been thin, but its business model could be sustained. This new SVOD business model requires Netflix to keep burning cash at an average of well over US$500 million a quarter in order to feed brilliant new productions to its audience. The company raised more than US$2 billion in fresh bonds in 2018, and will need more soon.

Indeed, Netflix sets out this problem in its final quarterly shareholder letter of 2018: “As a result of our success with original content, we’re becoming less focused on second-run programming.” Translation: “Our viewers want fresh meat.”

This problem seems structural – the sort of problem that might continue and even worsen. It could also resolve itself in several ways. Here are three:

Netflix does well in two out of three of these scenarios. And I hope it thrives. It can also keep raising prices, as it has done recently. My concern is that the investors currently fuelling Netflix may not maintain their enthusiasm for business models with an unproven long-term profit record.

Like one of those great TV shows of the past few years, the SVOD business could take a dark turn any time now. Like most viewers, I’m hoping for the best.