Australian CEOs step into the shoes of The Big Issue vendors

Last week, Australian CEOs, like Richard Lindley of Realview, stepped out in high-vis vests to raise the profile of The Big Issue, the magazine helping people help themselves. 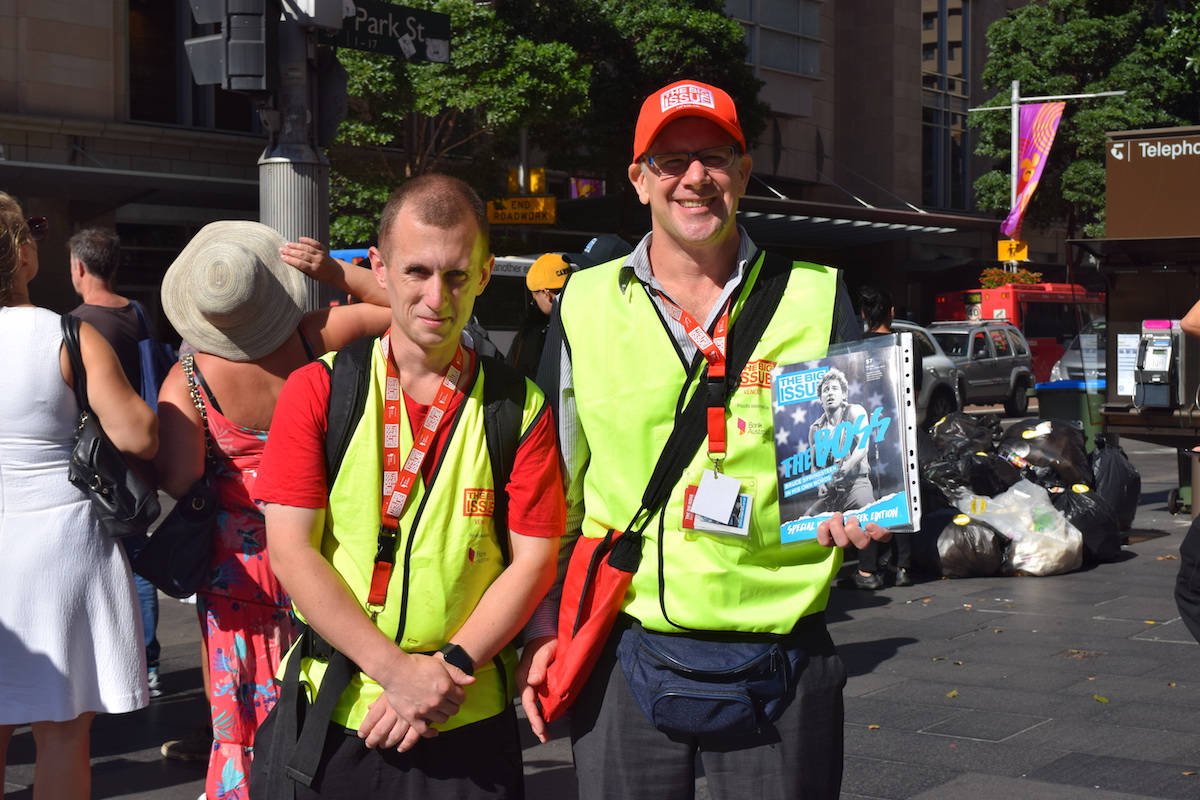 It’s 4.30 in the afternoon, but the sun is still blazing and the heat shows no signs of abating. On the corner of George Street and Park Street in the Sydney CBD, Richard Lindley, CEO of Realview, suits up in a red cap, yellow high-vis vest and a satchel full of copies of the latest edition of The Big Issue. He’s getting ready to participate in the Australian Big Issue campaign celebrating International Vendor Week, in which business leaders hit the pavement to sell copies of magazine. 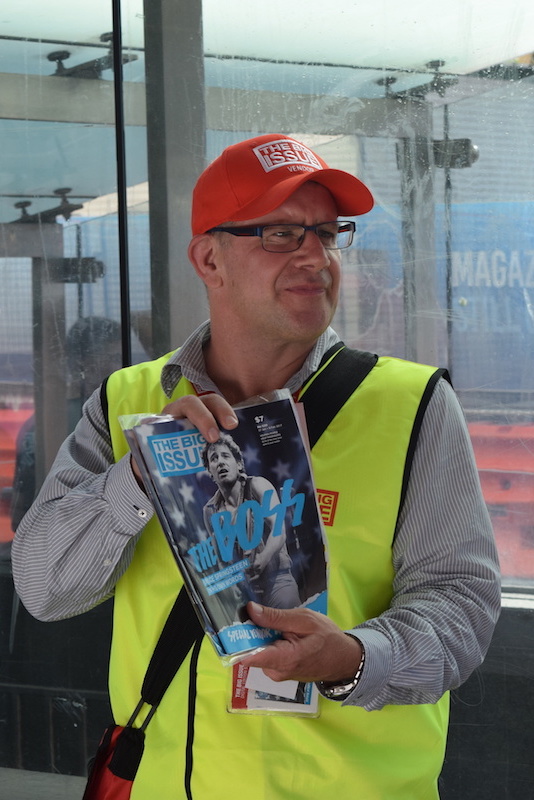 The Big Issue is a fortnightly street magazine that helps the disadvantaged, marginalised and homeless to help themselves. Vendors buy copies for $3.50 each, then sell them to the public for $7, keeping the profits.

More than 100 CEOs, executives and politicians around the country, such as Sydney Swans CEO Andrew Ireland, Telstra CEO Andrew Penn and Labor MP Tanya Plibersek, are helping to raise the profile of The Big Issue and the homeless and disadvantaged vendors working to earn an income.

This is Richard’s second year participating in the event, so he’s well aware of the challenge that awaits him. He describes the experience as “terrifying but enjoyable” and says he came away with a lot of respect for Big Issue vendors.

“They’re there all day. I was only there for half an hour and that was a harrowing half an hour for me, because you just get that rejection so many times.”

Chris Campbell, the NSW and ACT State Operations Manager for The Big Issue, agrees that the participating CEOs “have to get used to rejection”.

“Yes, it’s fun but I think it also raises an awareness for our CEOs — they find out how hard it is. If you look at our CEOs across the board, all of them use their social networks. Their friends and co-workers stop by and buy the magazine and that’s great, but the cold sales to people who they’ve never seen before, who are rushing past them on a busy day — it’s hard work.” 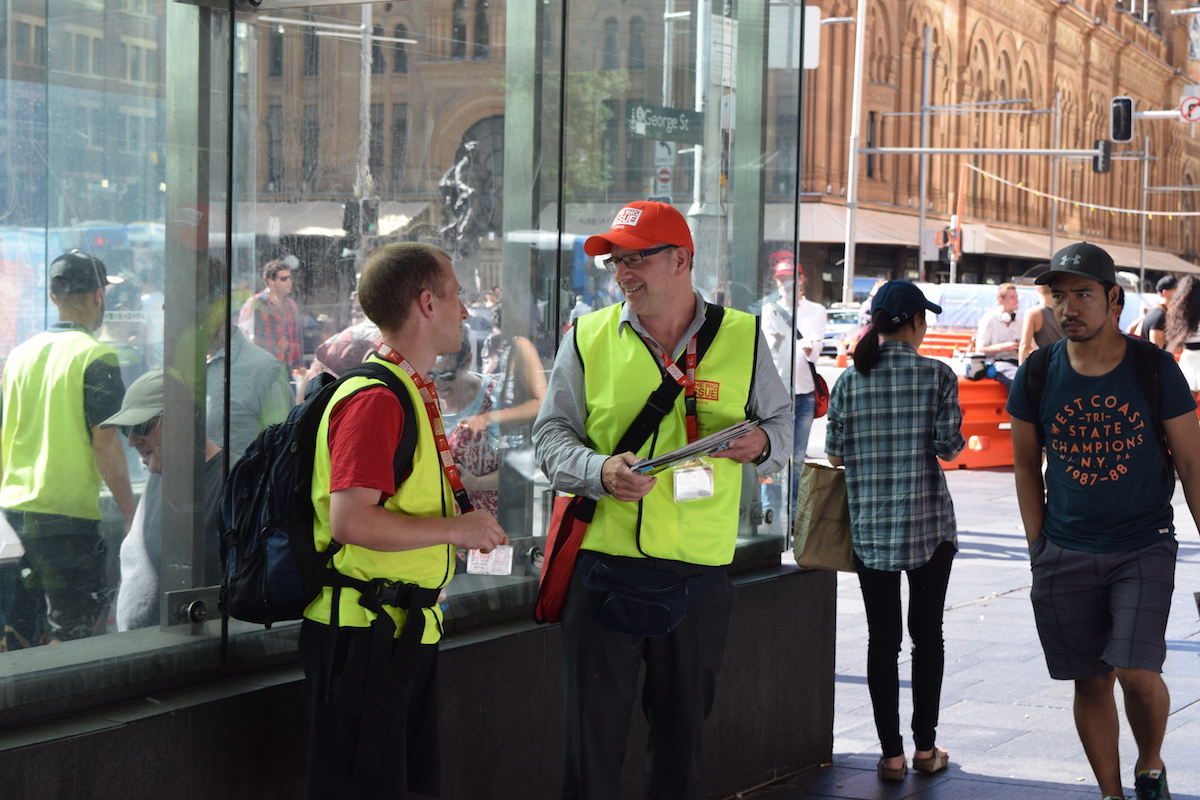 They’re there all day. I was only there for half an hour and that was a harrowing half an hour for me, because you just get that rejection so many times. – Richard Lindley

International Vendor Week celebrates the 100 street publications, and over 10,000 street vendors around the world, that make up the International Network of Street Papers. The idea for the Australian event came about as a way to involve people who might not normally engage with Big Issue vendors. Initially, The Big Issue called upon its corporate partners and subscribers, but Chris says that over time, as the visibility of the event has grown, more and more business leaders are asking to get involved.

Richard’s connection to The Big Issue started when it’s CEO, Stephen Persson, asked him to help create a digital edition of the magazine. “He’s a very convincing person,” laughs Richard. “Now we support them throughout the year with the digital version and it’s the least we can do,” he says of the Realview team’s pro bono work for the street publication.

Realview was the ideal firm to approach for the project. Richard and CTO Derek Chan founded the company in 1999, originally as an image management technology firm. In 2002, they moved into online publishing, and have been helping publishers with their online offerings ever since.

The project was a challenge for the Realview team. “When we sat down and thought about how we could actually implement digital, we realised it still had to come from the vendor. It wasn’t just something that someone would be able to go online and get, because that kind of negates the whole thing,” explains Richard.

Because The Big Issue is all about the interaction with the vendor, the team needed to come up with a process that would still give the vendor the opportunity to buy and sell the digital edition. They came up with scratch card system. The vendors buy the scratch cards to sell, and their buyers scratch a panel to reveal a code that unlocks the online version of that fortnight’s The Big Issue.

When we sat down and thought about how we could actually implement digital, we realised it still had to come from the vendor. It wasn’t just something that someone would be able to go online and get, because that kind of negates the whole thing. – Richard Lindley

Now, the plan is to optimise the digital version of The Big Issue for mobile users. “The current solution we have runs on mobile, but it’s a flip book, and zooming and panning is not the best experience on a mobile,” says Richard. “Our latest solution takes the pdf, breaks it down into its native components, into articles — so we get the headline, byline the copy, the images, and some of the styling — and we turn that into an html page. So it’s much easier to read on a mobile.”

“A lot of our people buy it to read on trains and on transport. I think it’s going to be really exciting to be able to have people look over somebody’s shoulder and they’re reading The Big Issue on their iPad,” says Chris.

At the moment, Richard says about 10–15% of Big Issue sales are digital, but with more and more people consuming content digitally, Chris thinks optimising the magazine for mobile platforms will make a “huge difference”. And Richard says Realview is also looking at designing bigger cards that stand out more against the print copy of the magazine, to make them more visible to buyers.

Out on George Street, Richard meets Scott, his partner for the afternoon. Scott is one of the vendors who really enjoys selling the digital edition. “It was really nice for him to connect to the people who provide us our platform for the digitals,” says Chris. 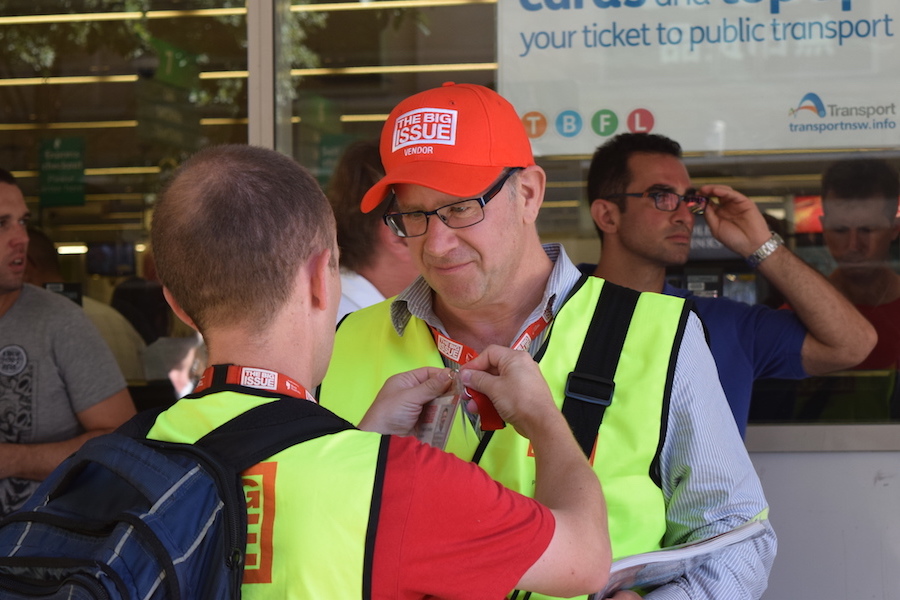 Big Issue vendor Scott, one of the vendors who enjoys selling the digital edition, helps Richard get set up.

He adds, “I think a lot of times our vendors don’t necessarily see all those connections. They don’t realise oftentimes how much machinery is in the background. And what kind of wonderful community of support they really have.”

But out there on the footpath, it’s Scott who’s supporting Richard in his sales efforts. After selling The Big Issue for nearly 5 years, Scott knows the tricks of the trade, including not to stand too close to a busy crossing. He steers Richard further down the street, where the stream of people passing by is less chaotic.

Partnering with CEOs during International Vendor Week doesn’t just connect vendors and business leaders, it breaks down the barriers between them. “The folks who sell The Big Issue are primarily the most disadvantaged, most marginalised members of our community,” says Chris. “And to have them have the opportunity to interact and converse as equals, in fact not just as equals but as mentors, to captains of business, the CEOs and the politicians and the policy makers, that’s a big deal for us.” 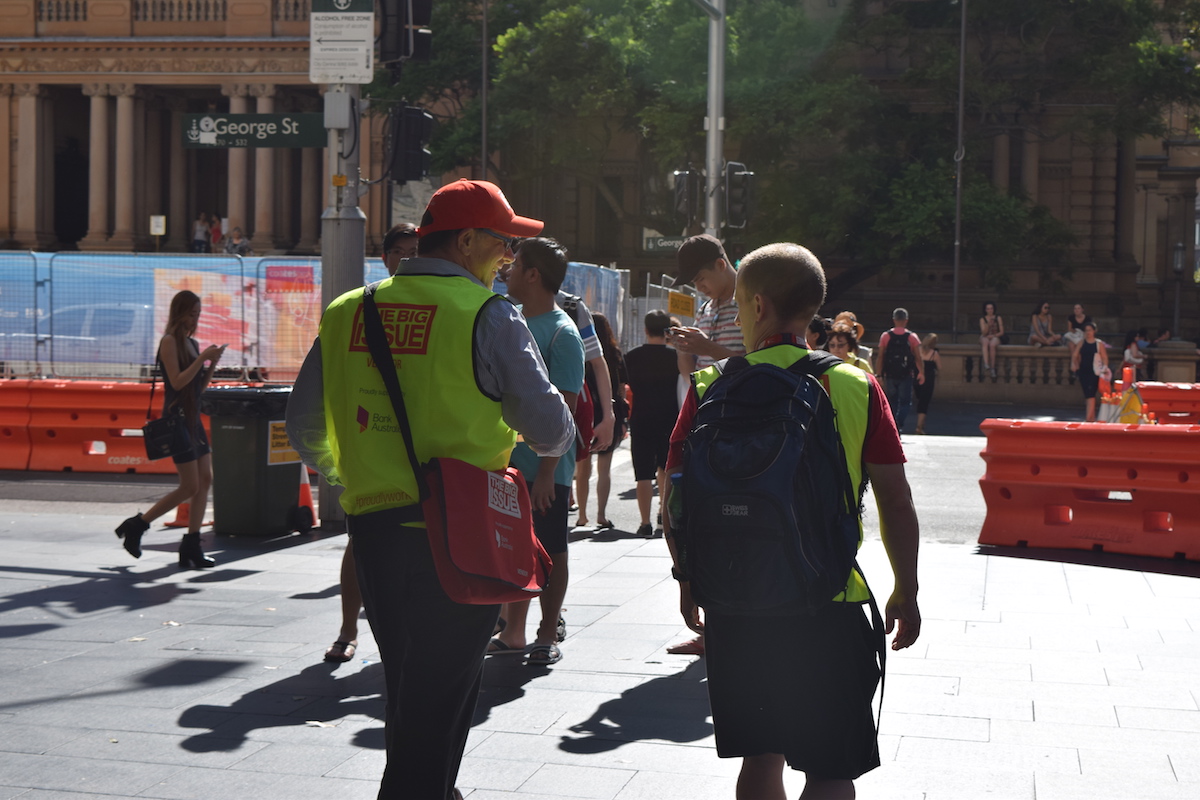 The folks who sell The Big Issue are primarily the most disadvantaged, most marginalised members of our community. And to have them have the opportunity to interact and converse as equals, in fact not just as equals but as mentors, to captains of business, the CEOs and the politicians and the policy makers, that’s a big deal for us. – Chris Campbell

Richard hopes that the event will get more people buying The Big Issue. “I’m sure a lot of people just walk past the person selling it every day, have never bought one, don’t even think twice about it and probably don’t even really understand what it is,” he explains. “To be able to raise that awareness and help people to understand or learn that it’s to help the homeless — that these people are helping themselves and not asking for a handout — I think it’s a really important thing.”

Chris agrees. “Our vendors are coming from really difficult circumstances. We have vendors who are sleeping behind the state library every night or sleeping in parks or what have you, and they get out and they sell the magazine, rain or shine. They choose to work.

“We know they are likely to make more money begging on the street than they are selling the magazine but they would rather proudly work than ask for a hand out and I find that inspiring.”

Amanda Smuin is a journalist and digital content creator, with a background in medicine and the arts. She writes, produces and manages digital content.