Carla Zampatti on how to run a fashion empire 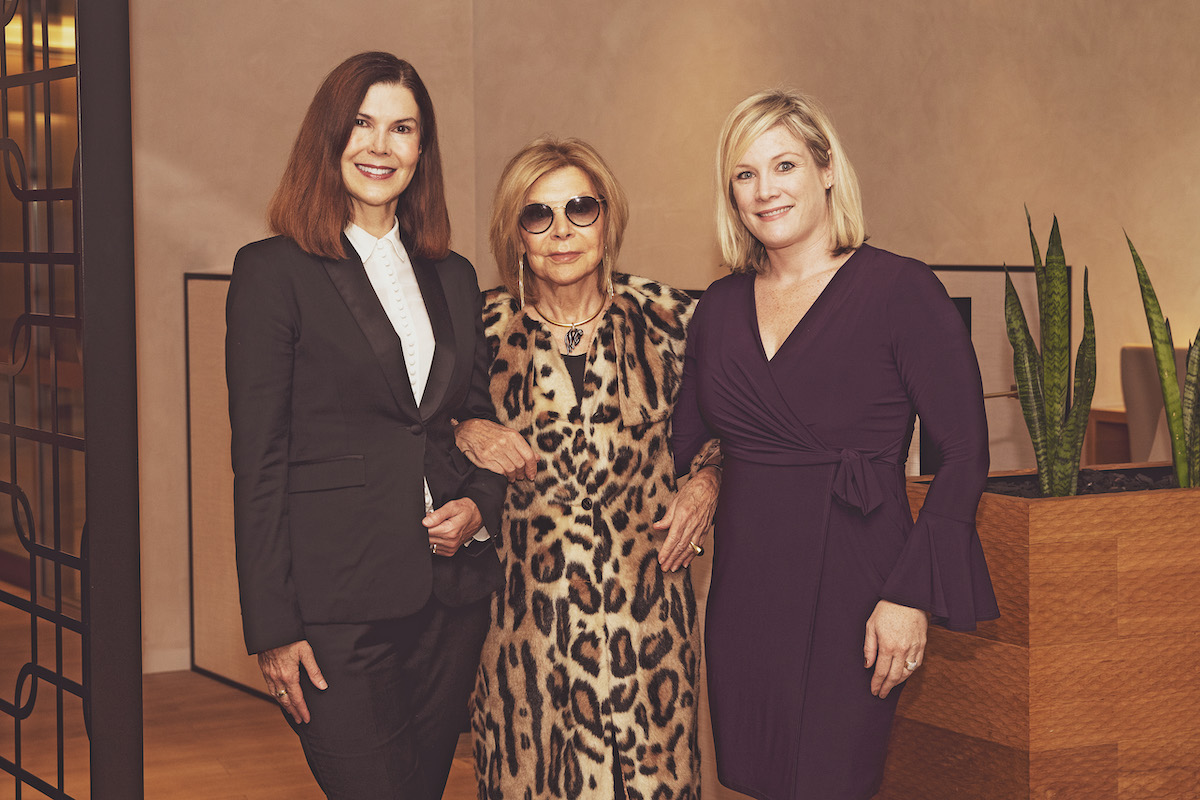 Carla Zampatti, the 77-year-old Italian-born Australian fashion icon, is the epitome of style. With chic hair and make-up, wearing shades (indoors), a full-length faux leopard-print coat and sleek patent heels, Carla’s so on-trend she can (and did) make someone more than 40 years her junior feel somewhat outdated.

She’s like a luminary out of a Fellini film, all style and candour, wearing on her sleeve the passion for an industry she’s been part of for more than half a century.

She sits alongside two similarly strong and inspiring women: Jane Watts, General Manager, Westpac Retail and Premium Bank, who has dedicated her career to the traditionally male-dominated world of financial services; and Ursula McGeown, CEO of Dress for Success Sydney, a charity devoted to giving women financial freedom through providing corporate attire and professional development tools.

The trio come together for causes close to their hearts: empowering women, driving sustainability in fashion, and helping up-and-coming fashion designers make it in the business world.

Responsible for the private wealth of the Group’s three Private Banks – Westpac Private Bank, St. George Private and Bank of Melbourne Private – over the past eight years, Jane has also been a key driver of BT Runway.

“If you happen to be on a board or in a position of influence, suggest the employment of women right across the spectrum.” – Carla Zampatti

The event, born in 2013, melds fashion with finance, showcasing Westpac’s established fashion designer client base while providing much-needed business advice to young designers, while also supporting Dress for Success’s cause.

The three women together in a room exude enthusiasm, talent and a collective strength. Fashion, finance and charity may be three quite disparate sectors but these women, underneath their professional armour, are all striving to make a difference.

Passing the golden 50 years in the trade, Carla has seen all its ebbs and flows; from its “dark years” – as Vogue Australia Editorial Director Edwina McCann describes it – to seeing the sector pull its socks up to be more socially conscious and sustainable.

Edwina, also the head judge for this year’s BT Emerging Fashion Designer Award and Co-Chair of the Australian Fashion Council, recognises that “sustainability is a huge issue for the fashion industry – it’s the second most polluting in the world”.

The fashion industry had the label of “sweatshops; the rag trade” for decades, which it’s still trying to recover from. “We have to work hard to dispel this, to go out of our way to be fair, to make sure people are paid properly,” Carla says.

“It’s a responsibility of all designers to do that while running an efficient business – and respect people along the way.”

An essential benchmark to be able to thrive and survive in the fashion industry today – or in any sector – is being socially conscious and sustainable, which is why it was a key focus of this year’s BT Runway.

“Take a risk, be bold, dare to be different.” – Jane Watts

Carla is one of the more than 500 guests who attended this year’s event alongside other regarded fashion designers – including Carla’s daughter, Bianca Spender, a panel judge and a well-known fashion designer in her own right.

“It’s a very glamorous night,” Carla says, but adds that it’s “a special event” that is about more than fashion.

The event gives emerging fashion designers a chance to put their designs in front of high-net-worth private banking clients, while celebrating and showcasing renowned fashion designers on the catwalk – and supporting women in need in Australia through Dress for Success.

But it goes even further. It aims to provide substantial financial advice to up-and-coming designers, acknowledging the importance of running a “business like a business – not like a hobby”, as Carla says.

After all, what would any organisation – whether a fashion label, a bank or a charity – be without a strong balance sheet? Enter Jane. “I’ve always had a passion for helping people,” says Jane.

“Banking and financial services provides a unique combination where you can truly help people make a difference from a lifestyle and financial perspective. I’ve always loved the complexity and how fast moving it is.” 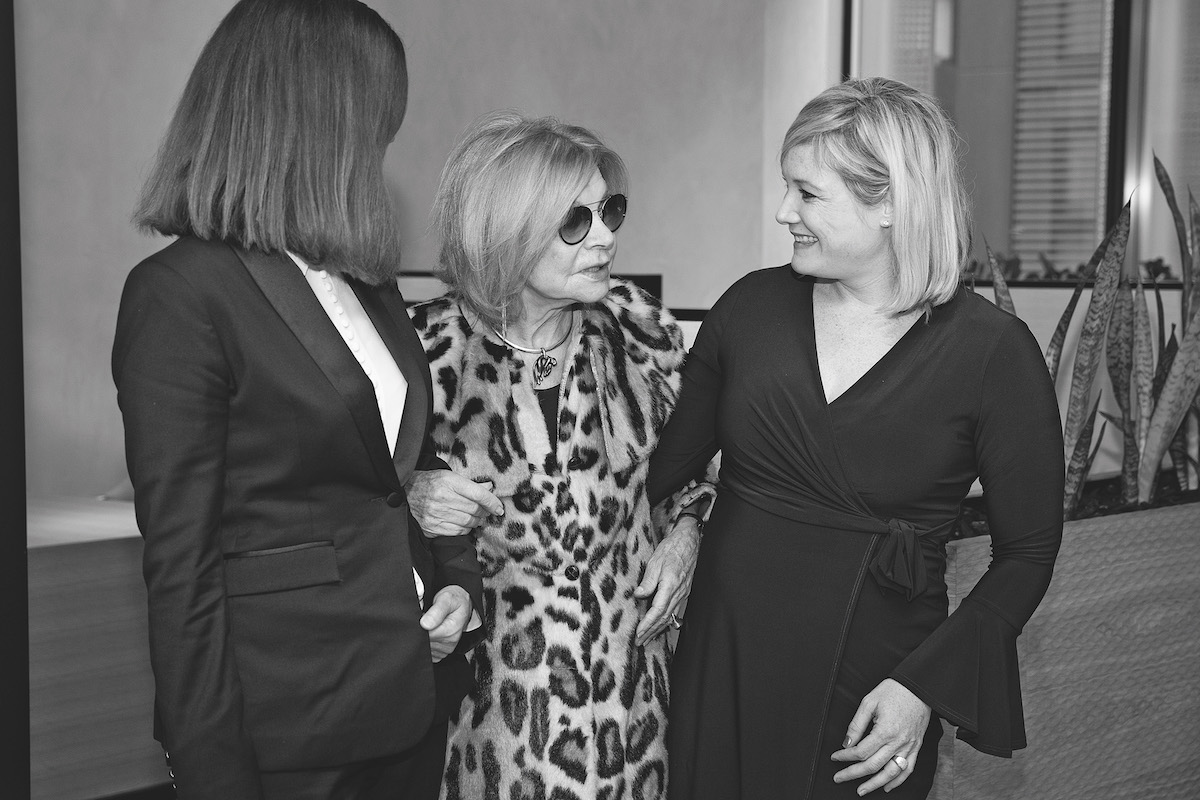 Jane, Carla, and the judging panel, including Bianca and Edwina, are aware that financial literacy is a significant issue among young designers.

“Fashion designers are enormously talented and creative, but the business side is something that can be an afterthought,” Jane says.

Carla agrees. “I love the fact that you help designers understand that it’s a business,” she tells Jane.

For Carla’s daughter, Bianca, who studied business at university, keeping on top of the balance sheet is a time-consuming task. “Fashion is a creative vision, there is a craft to it,” Bianca tells The CEO Magazine, “but then there is this incredible layer of finance and cash flow. I’ve done a Bachelor of Commerce and even I can get completely drowned in it.

“I’ve literally spent a week doing cash flows,” she laughs. “I would not be able to do what I do without having an understanding of my business. There are so many components in the fashion business that you need to understand.”

This year’s BT Emerging Fashion Designer Award, presented to Melbourne-based fashion designer Blair Archibald, was worth A$100,000, including a A$10,000 grant and financial planning services. Blair was chosen out of 50 applicants, alongside runners-up Courtney Holm of independent fashion label A.BCH and Minhee Jo of Aaizél.

“The power of fashion is massive. Look at men in their uniform – the sharp shirt, the tie, the suit. Women must be as conscious as that if they want to be promoted,” – Carla Zampatti

“The winner not only gets prize money and international business-class tickets, but also financial planning advice and support, and tax advice through one of the accounting partners, which is really important because it’s helping them understand how to run a business,” Jane says. 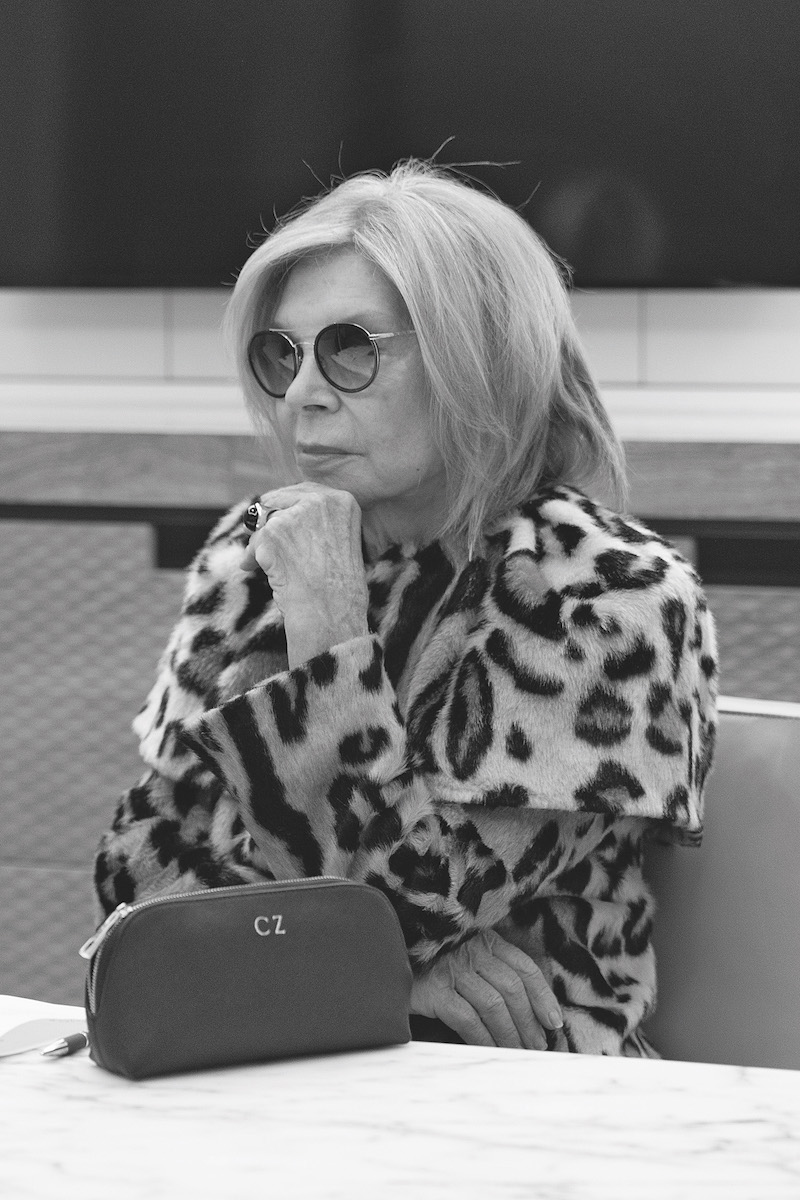 Jane points out that the fashion industry contributes about A$12 billion per annum to the economy and employs around 220,000 people. “So, it’s a very important sector,” she says.

“We also recognise that the fashion industry ecosystem is rife with disruption from the likes of international fast fashion chains and online retailers.”

Bianca tells The CEO Magazine that sustainability was an important component in this year’s event. “All the designers were very thoughtful about how their products were produced,” she comments. “It really didn’t feel like an option for them to build a sustainable business; it just felt like standard practice.”

She admits the industry is seeing through a teething phase, adding that the concept of sustainably is still young in the industry.

“We have a lot to improve in the things that we’ve started changing. We haven’t pushed it to where it can go, and it takes a while for those changes to happen,” she says. “It’s an evolving picture and I’m sure it will be very different in 20 years’ time than what it is now.”

Community standards are changing, which is forcing the industry to adapt. Ethical investing is on the rise, Jane points out, and corporate social responsibility is a core component in business these days, with indexes like MSCI making companies accountable for sustainable practices.

“We estimate that we save between 130,000 to 150,000 pieces of clothing from landfill each year… That’s social and environmental impact.” – Ursula McGeown

“There’s this real interest and focus on provenance; where things come from, where they’re made, who they’re made by,” Edwina says. “Seeing these young designers creating, not just great design houses, but sustainable businesses, is probably the best thing I’ve seen.”

Head of Sustainability and Ethical Sourcing at online clothing retailer The Iconic, Jaana Quaintance-James, highlights a shocking statistic: six tonnes of textiles are going to landfill in Australia every 10 minutes.

In fact, 10% of all greenhouse gas emissions are caused by the fashion industry, according to the World Economic Forum.

Fast fashion is a major culprit. In just over a decade, clothing production has doubled, and consumers are much quicker to throw away clothes, the WEF says. Around three-quarters of those clothes will be burned or buried in landfill – and only about 12% gets collected for recycling.

Organisations such as ThredUP, the largest online thrift store, are supporting a circular economy to reduce this waste – as is Dress for Success, which Ursula says started out “to make a social impact, particularly with the rise in fast fashion but also the rise in the movement with the war on waste”. 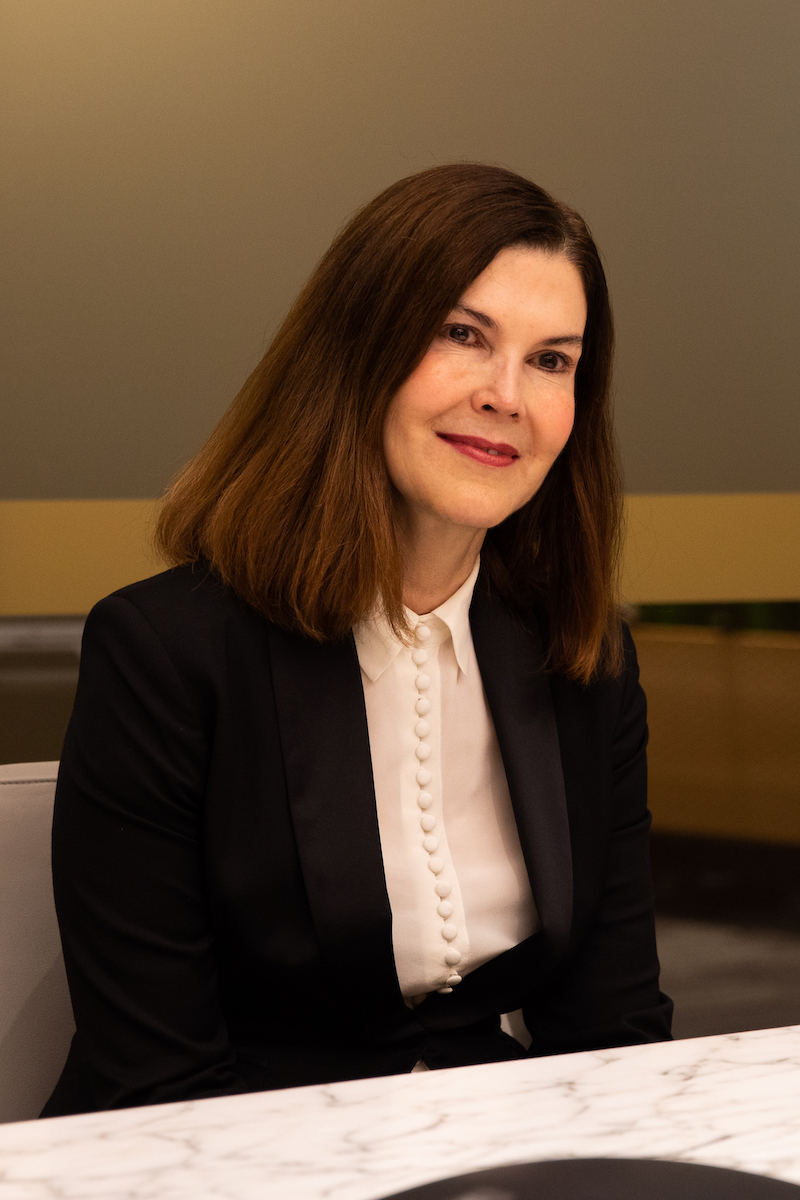 She explains that the charity is inundated with more clothes than it can handle, sometimes needing to refuse donations because “fast fashion items don’t make the cut”.

“We’re in a balancing act where we really need quality clothing that will last and stand the test of time … because we’re also in the business of making sure clothes don’t make it to landfill. We estimate that we save between 130,000 to 150,000 pieces of clothing from landfill each year, and that’s because we’re distributing them to clients or selling them via fundraisers to raise money for our charity. That’s social and environmental impact.”

On top of the sustainability mission, Ursula believes her work “can change the trajectory of a young woman’s life”. “We provide clothing, but also coaching and confidence building. It’s really building the whole woman so that she can go out, get a job and be financially independent.”

Some of the women the charity helps may be just out of prison or trying to bust out of the poverty line. They may have never had a job interview before and don’t know how to present themselves professionally.

“Some of them have limited or no paid work experience when they come to us and you see how they blossom through providing them with those key life and business skills.”

Ursula says Dress for Success is about “helping a woman break down that one barrier that makes her feel she doesn’t look like she belongs in the room”. “Clothes are very powerful,” she says.

“Having a beautiful outfit is an invisible armour that makes a woman feel strong and brave.” It is clear that Carla also believes “presentation is vital”.

“The power of fashion is massive. Look at men in their uniform – the sharp shirt, the tie, the suit. Women must be as conscious as that if they want to be promoted. We don’t want to look like them but we have to be sharply dressed in business, particularly in the corporate world.”

Carla says that empowering women starts with giving them opportunities. “If you happen to be on a board or in a position of influence, suggest the employment of women right across the spectrum,” she says. “What we all can do is give responsibility to young women who are not quite there.”

“It’s important to stick to what you know. You’re giving the market something different. If you try and compromise that difference and be like everybody else, you’re just going to disappear,” Carla continues.

“It’s important for women to not be afraid. Back yourself and don’t just stand back and wait for that promotion. It won’t happen if you just sit back.”