Is there gold in them thar crypto bills? asks Stephen Corby. 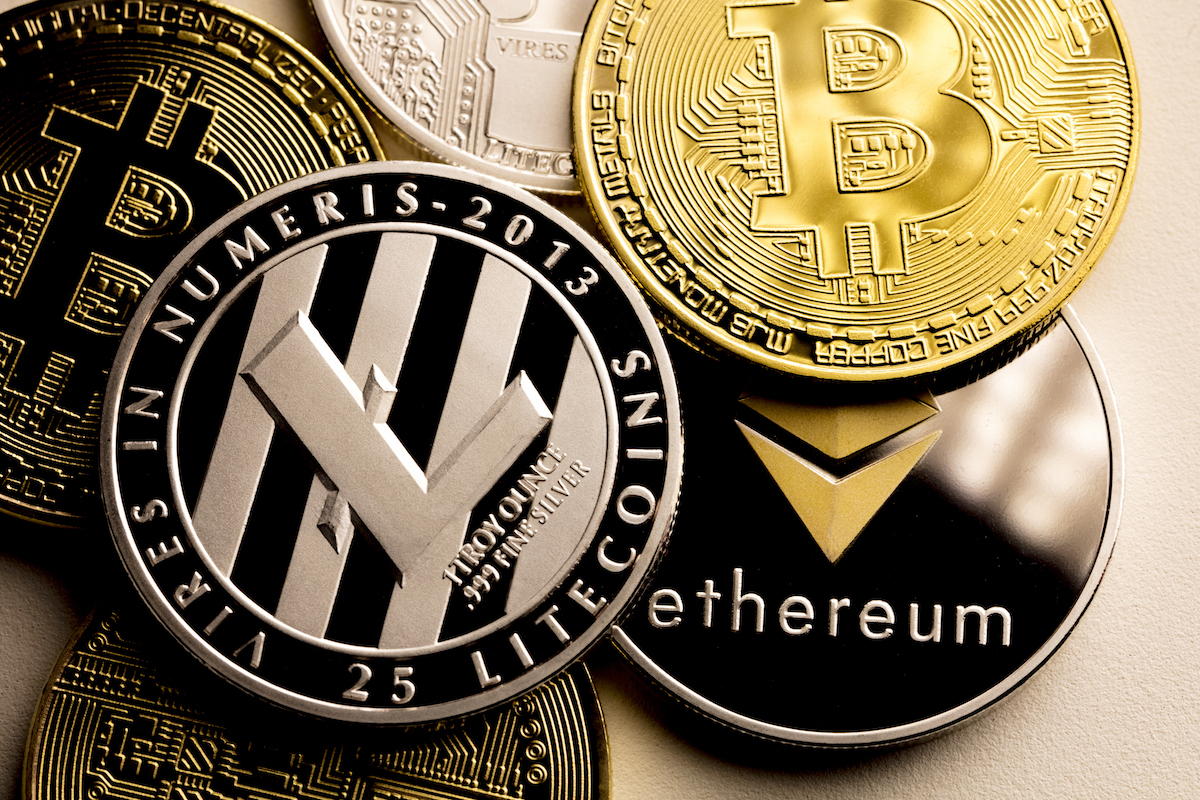 With so many conflicting yet fervently held ideas, is it any wonder the world of cryptocurrency is so difficult to decipher?

“It’s the greatest gold rush since the actual gold rush.”

“It’s nothing more than a pump-and-dump scheme designed to separate fools from their money.”

“It’s the future of world finance.”

“It’s the ultimate equaliser distributing wealth back to millennials.”

“It’s controlled by billionaires who are using it to inflate their already swollen bank accounts, all while deflating yours.”

For every new coin or token (and there are now around 1,300, with a total market cap of more than US$400 billion) there are wildly contrasting opinions on whether this is a legitimate financial revolution, or if the whole thing is little more than a digital house of cards.

Or, as is also possible, a bit of both.

Over the past 12 weeks or so, the cryptocurrency world has been battered by unbelievable volatili-ty (the graphs are enough to make a yo-yo woozy), led by crypto’s golden child, Bitcoin.

The leading cause of all this volatility is security – or the lack of it. Even if you do make your fortune in cryptocurrency, there’s seemingly no guarantee it won’t be stolen from you; your coins hacked from an online exchange or digital wallet, never to be seen again.

Just last month, the cryptoverse was rocked by its biggest theft to date, with Japanese exchange Coincheck hit by a US$530-million heist.

That followed a US$67-million attack on mining platform NiceHash in December, which itself followed a US$72-million heist at Bitfinex, which followed… you get the idea.

And smaller coin start-ups, known as Initial Coin Offerings (ICOs), aren’t immune. EY studied 372 ICOs, and found more than 10% of the US$3.7 billion raised had been stolen or lost.

Yet all this risk and volatility has deterred exactly nobody. There’s gold in them thar crypto bills, they say, and any genuine revolution is sure to experience a few bumps along the way.

If anybody’s entrance to this world of cryptocurrency perfectly captures the soaring highs and crushing lows of what’s become the world’s most volatile asset class, it’s Andrew Masanto’s.

The now New York-based Australian studied law and economics at the University of Sydney before launching an SEO-based marketing company. While prowling the internet for news of changes to Google’s algorithms, in 2010, he stumbled across a new concept; Bitcoin.

“I got in at between US$20 and US$30 per coin, and bought around 500 coins, which was about one or two months’ income for my business at the time. I held them on the Mt Gox exchange,” Masanto recalls.

Mt Gox. For those who move in cryptocurrency circles, the tale of the infamous Japanese exchange is passed along like a ghost story to young investors.

Once responsible for handling up to 70% of all Bitcoin transactions, the world’s biggest exchange was hacked in June 2011, the nerdy bandits making off with US$8.75 million worth of Bitcoin.

And then, incredibly, it happened again, only much worse. The Japanese giant filed for bankruptcy in 2014, claiming hackers had hit it again, this time taking more than US$460 million.

Of the coins stolen in the first heist, 500 belonged to Masanto – worth a painful US$1 million at the coin’s peak.

“I thought ‘Well, that was a fun ride, but I’m never touching this shit again’,’’ Masanto says.

But the crypto bug had bitten, and the staggering profits on offer soon tempted him back. He now sits on the board of Cornerstone Capital Group in New York, and works with companies preparing to launch their own coins or tokens in ICOs.

It’s in this murky field that critics say the potential for corruption is highest. An ICO is not unlike like an IPO, although with one fairly important difference; in the world of cryptocurrency, the value of a fledgling company is measured by little more than an online white paper outlining what it plans to do, along with headshots of key staff.

Budgets, profits and a successful track record are of little importance.

As a result, there are hundreds of virtually value-less companies launching tokens (labelled ‘shit coins’ by the crypto community), that compete with coins with genuine potential.

Plenty of these focus on fixing the known problems of Bitcoin (it’s too slow and too expensive to process transactions), while others are old-world companies attempting to latch on to a new trend.

Take Kodak, for example. The 130-year-old company announced plans to launch a “photo-centric cryptocurrency” that will “empower photographers and agencies to take greater control in image-rights management”.

The company’s traditional shares shot up 89% on the news.

“It is the wild west,” Masanto says. “Some of these things will just never work, but people are dumb enough to put money in. Others just aren’t technically possible, but people don’t realise it. And some of them are scams. I know for a fact that there are scams, and it can be difficult to identify them.

“It’s as if the token market has given people the ability to invest in start-ups, and 90% of start-ups fail. And this is no different.

“Initially, there were two ways to look at an ICO. The first is that you were buying a utility, so you could sell me your future work via tokens that can be traded in at a later stage. The second was that you’d invented something that actually serves a purpose; maybe it allows me to access more complex functions on a currency exchange, for example.

“It’s not exactly shares, it’s really an expression of perceived future demand for a service or product. You’re visualising that demand. But there’s often nothing it’s based on – you’re gambling on the future revenue or success of a product or service that might not exist yet.

“But all that is rapidly bleeding into this new wave, where you get an economic benefit that occurs through the token itself.

“So a company might say that 25% of all future revenue will be used to purchase tokens on the open market, thus driving upward price pressure on the tokens you hold.”

The potential in ICOs is massive, especially given the high entry point to the bigger coins, like Bitcoin or Ethereum.

Some coins start at just a couple of cents and experience growth of 30,000%. Take this, from antivirus guru and prominent cryptocurrency commentator John McAfee: “If you know investing, you know that it is easier for a three-cent coin to go to three dollars, than it is for a $300-dollar coin to go to $30,000 – same rise.”

Which, of course, leads to the oldest investing trick in the book; the pump and dump. Investors will buy a coin cheaply, then talk up its prospects on forums and on Twitter, encouraging others to climb aboard.

Once the stock is pumped up to a certain level, these investors then dump that coin, making off with the profits while everyone else is left holding worthless tokens.

The alternative attack is what the crypto community call FUD (Fear, Uncertainty and Doubt). Sharks will target a genuine coin, seeding FUD about it across the internet, prompting a drop in price. Those investors then will dive in at the new low point, and ride the coin back up.

The sophistication is incredible. While 4chan forums heave under the weight of people either hyping or deriding a particular coin or token, the biggest impacts come from coordinated attacks, usually launched on Twitter.

In one such instance, a Twitter user named Trill told his millions of followers he had proof that the technology propping up one coin, Verge, had failed, prompting a huge price plunge.

Sure enough, during that plunge a new wallet was created and two billion coins were purchased.

“That’s a dark art,” says Masanto. “And no-one will ever admit to doing that. But I think it happens. If you can impact the market, then market manipulation is possible.”

Some market forces are easier to spot, though. China, home to more Bitcoin miners than anywhere else on the planet, is now taking steps to ban the process.

The government there has already outlawed ICOs as part of much broader crackdown on cryptocurrency trading and exchanges, each new announcement wreaking havoc on the markets internationally.

At the same time, Chinese authorities have been running trials of its own cryptocurrency, one which it would control entirely.

Despite all this, the crypto tide does not seem to be subsiding.

And it’s got the traditional financial houses worried.

Just this month, banks in the UK, the US and Australia’s Commonwealth Bank banned buying cryptocurrency on credit cards, citing “the unregulated and highly volatile nature of virtual currencies”.

Yet at the same time, they are (albeit begrudgingly) hedging their bets by working with the cryptocurrency world.

Ripple, a popular alt-coin that works within the banking system that is designed to allow you to send money across the world in real time, has reached a $92.3-billion market cap.

It now has more than 100 major clients, including banking heavyweights Santander, UniCredit, UBS and Standard Chartered.

Perhaps more importantly for the future of cryptocurrency, Bitcoin is heading mainstream.

The currency that cut its teeth on illegal drug-trading site Silk Road and in the furthest corners of the dark web can now be withdrawn from several Bitcoin ATMs across Australia and the world.

Users can punch in the details of their digital wallets and withdraw cold, hard cash.

Some stores in the US even accept Bitcoin (and Ethereum) as payment, although the price fluctuations and painfully slow transaction times make it difficult to know exactly what you’re paying for a product.

Cryptocurrency, then, will be playing some sort of role in our future.

Whether we want it to or not.

“My personal view is, unless someone figures out how to break cryptography, which would require quantum computing, Bitcoin is here to stay as a legitimate alternative asset class,” Masanto says.

“It has shown it can survive and thrive. And it will be an asset class that people will come to get used to over time.”