Arianna Huffington and Julia Gillard on leadership during uncertain times

The two trailblazers shared why the pandemic is an important way to reset the world. 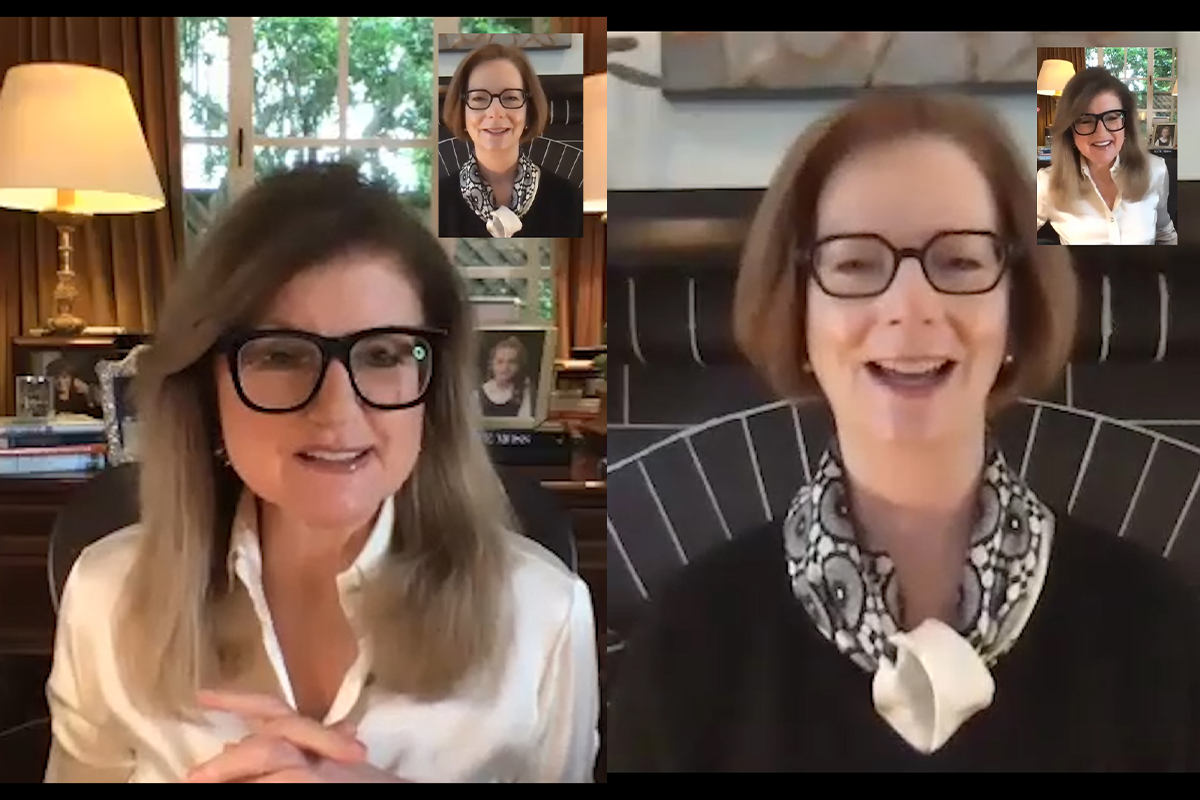 Arianna Huffington and Julia Gillard have come together to share how they’re coping during the pandemic, hoping to uplift and inspire others.

The Thrive Founder and CEO and Australia’s first female prime minister engaged in a heartwarming discussion about the importance of optimism and empathy during these testing times.

“We have to use this time as a catalyst for building a world that’s better, fairer and more compassionate than the world we are leaving behind,” Arianna said.

The trailblazers believe the pandemic could be used as a way to hit reset on the world we once knew in order to create a better community for the future.

“I feel it’s an opportunity now to change the world that we’re going to go to, instead of going back to a world fuelled by stress and burnout, which is why I founded Thrive ,” Arianna shared. “It’s kind of amazing that the leadership skills that have been traditionally identified with women like empathy, team building and collaboration are now more needed than ever.”

As Australia’s first – and only – female prime minister since the inception of the Commonwealth in 1901, Julia not only understands what it takes to be a successful leader, but also how to shape the years ahead.

The iconic politician and Beyond Blue Chair explained the world can be better if we take time to learn from the uncertain times of the pandemic.

“After all of this, how can we build back better and take some of the things we’ve learned from this time about community and the value of essential work and flexibility, and what can we take with us that would make a difference for the long-term?” Julia said.

There is no denying 2020 has been a difficult year for billions of people around the world. During the last week of March, Australia’s Beyond Blue recorded a 30% increase in calls and emails.

“We’ve certainly seen a big surge in demand for our services,” Julia explained. “I think this is a time where at least we’re all talking about how to protect our mental health and people are looking out for information whether it’s from Beyond Blue or Thrive or many other bodies.”

Having accidentally overworked herself to the point of exhaustion in 2007, Arianna truly recognises the importance of sleep and avoiding burnout for optimal performance.

“It’s kind of amazing that the leadership skills that have been traditionally identified with women like empathy, team building and collaboration are now more needed than ever.” – Arianna Huffington

“I have three favourite micro steps – too small to fail,” Arianna said. “One is to focus on my breath every time I’m feeling stressed, the other thing is to constantly remind myself of three things I’m grateful for, and my third step is to set a cut-off point for news and social media consumption.”

The uplifting video conversation between two of the world’s most influential leaders was brought to life by Optus’s #GDayADay series. The campaign featured a collection of discussions between some iconic personalities including Daniel Ricciardo, Ian Thorpe and Mack Horton.

Optus Head of Consumer Marketing Mel Hopkins said the series was launched in the midst of COVID-19 with the aim of inspiring people to stay connected.

“In this last instalment, we are delighted to bring together two fearless female leaders in conversation about the need, now more than ever, for empathy and collaboration,” Mel said. “At the heart of this campaign is the idea of staying connected and optimistic, especially in uncertain times.

“These two inspiring women, who have had such an impact on politics, media, business and wellness, are the perfect finale for optimism as we move toward recovery.”