Change is inevitable, but those who seek it and actively embrace it will ultimately thrive. 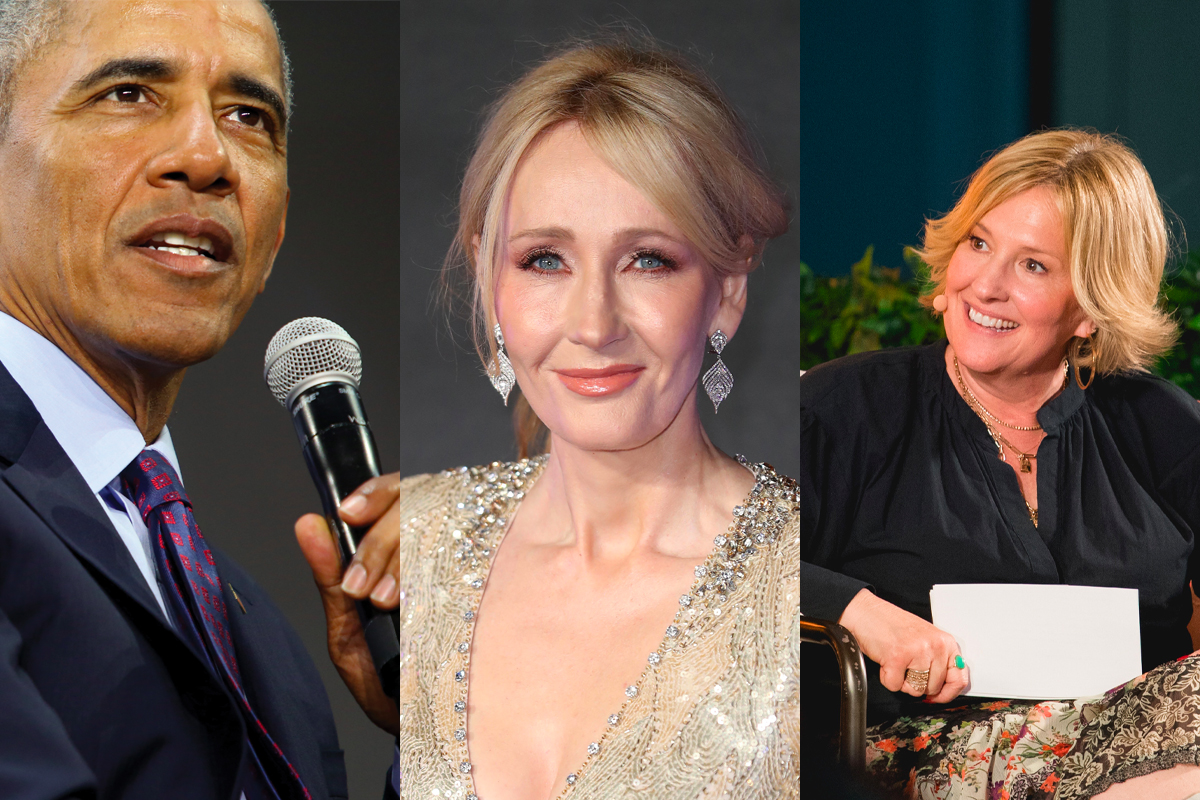 While our human brains are wired to seek comfort, remaining in a comfortable place for too long can hold us back from achieving our goals and growing as individuals.

Global consulting firm RGP conducted a recent study that focused on how Fortune 1000 businesses adapt to change and macro events, such as the pandemic. One of the findings showed 40 per cent of employees reported that change in their organisation occurs when their bottom line is at risk. This suggests a need for companies to shift their perception of change from threat to opportunity for growth.

Listening, having empathy, flexibility and the ​​democratisation of power are some of the core qualities that enable companies to successfully navigate disruption.

Allow the words from the world’s greatest artists, politicians, activists, CEOs and writers to propel you to new heights as they share their pearls of wisdom to encourage each of us to take inspired action.

“What you’re supposed to do when you don’t like a thing is change it. If you can’t change it, change the way you think about it. Don’t complain.”

Recognised as one of the world’s greatest innovators and generators of wealth, Elon Musk is the founder of SpaceX, Neuralink and The Boring Company, and CEO of Tesla.

“Some people don’t like change, but you need to embrace change if the alternative is disaster.”

German-born Albert Einstein is regarded as the most influential physicist of the 20th century, winning the Nobel Prize for Physics in 1921.

“Life is like riding a bicycle. To keep your balance, you must keep moving.”

A computer programmer and entrepreneur, Mark Zuckerberg is the Co-Founder and CEO of Meta, formerly Facebook.

“The biggest risk is not taking any risk … In a world that is changing really quickly, the only strategy that is guaranteed to fail is not taking risks.”

Widely recognised for her honest and engaging personality, Oprah Winfrey is a television personality, actress and entrepreneur, as well as one of the richest and most influential women in the US, who overcame many challenges in her early life.

“The greatest discovery of all time is that a person can change [their] future by merely changing [their] attitude.”

Considered a visionary, Steve Jobs together with Steve Wozniak founded Apple in 1976, overseeing the development of the revolutionary iPod and iPhone.

“The people who are crazy enough to think they can change the world are the ones who do.”

Globally recognised as the most powerful woman in the world, Angela Merkel served as Germany’s Chancellor for 16 years.

Barack Obama was elected President of the US in 2008, becoming the first African American to serve in the role.

An influential researcher and storyteller on the topics of courage, vulnerability, shame and empathy, Brene Brown’s greatest motto is ‘courage over comfort’.

“Shame corrodes the very part of us that believes we are capable of change.”

An Oscar-winning actor and best-selling author, Shirely MacClaine is best known for her portrayal of eccentric characters and beliefs about reincarnation.

“Someday perhaps change will occur when times are ready for it instead of always when it is too late. Someday change will be accepted as life itself.”

Worth US$139 billion in 2021, Bill Gates shifted his wealth and efforts from Microsoft to zero-carbon energy and philanthropy.

Serving as South Africa’s first Black President in 1994, Nelson Mandela is remembered as an activist, politician and philanthropist.

“There is no passion to be found playing small in settling for a life that is less than the one you are capable of living.”

Mahatma Gandhi is best known for leading India to freedom from British colonial rule in 1947.

“Be the change you wish to see in the world.”

Self-taught television cook and food writer, Nigella Lawson is known as one of Britain’s most-loved food personalities and a feminist.

“I think we all live in a world that is so fast-paced, it’s threatening and absolutely saturated with change and novelty and insecurity. Therefore, the ritual of cooking and feeding my family and friends, whoever drops in, is what makes me feel that I’m in a universe that is contained.”

“If you don’t get out of the box you’ve been raised in, you won’t understand how much bigger the world is.”

Known as the first African-American First Lady of the US, Michelle Obama is also an advocate for a number of social causes and is a role model for women.

“The choice, as [Barack] saw it, was this: you give up or you work for change.”

Sir Richard Branson is most widely known as the founder of the Virgin Group, one of the world’s most recognisable brands, and his recent space mission.

“Every success story is a tale of constant adaption, revision and change.”

The founder of The Huffington Post has written 15 books, including Thrive and The Sleep Revolution, which signifies her passion for educating the public about the importance of sleep.

“The first step [towards] changing the world is to change our vision of the world and of our place in it.”

British author, philanthropist and film producer JK Rowling wrote the best-selling Harry Potter book series and is known for her ‘rags to riches’ life story in which she went from surviving on benefits to becoming a billionaire author.

“I was set free because my greatest fear had been realised, and I still had a daughter who I adored, and I had an old typewriter and a big idea. And so rock bottom became a solid foundation on which I rebuilt my life.”

Sergey Brin has been most influential as an entrepreneur and Co-Founder of Google alongside Larry Page.

“Once you go from 10 people to 100, you already don’t know who everyone is. So at that stage you might as well keep growing, to get the advantages of scale.”

“If you’re changing the world, you’re working on important things. You’re excited to get up in the morning.”

Jeff Bezos serves as the Executive Chair of ecommerce giant Amazon, which he also founded.

“We humans coevolve with our tools. We change our tools, and then our tools change us.”

A Nobel Peace Prize recipient, the Dalai Lama is the spiritual leader of Tibetan Buddhism.

“Just one small positive thought in the morning can change your whole day.”

PepsiCo’s former CEO, who served 24 years with the company, Indra Nooyi is worth an estimated US$290 million.

“CEOs need keep an open mind so they can adapt to a rapidly changing world and need to bring an abundant dose of emotional intelligence to the job.”

Now 18, environmental activist, Great Thunberg protested outside Swedish parliament when she was 15, calling for stronger action on climate change. She has since inspired young people around the globe to follow suit.

“All we have to do is to wake up and change.”

Jane Fonda is as an American actress and political activist.

Rising to fame in her role as Hermione Granger in the Harry Potter film series, Emma Watson is also a spokesperson for women’s equality.

“If you truly pour your heart into what you believe in, even if it makes you vulnerable, amazing things can and will happen.”

“Only put off until tomorrow what you are willing to die having left undone.”

A highly successful self-made businesswoman, Estée Lauder is the driving force and founder behind the leading beauty giant The Estée Lauder Companies.

“I didn’t get where I am by thinking about it or dreaming it. I got there by doing it.”

Warren Buffett is a philanthropist and is considered one of the most successful investors of all time.

Sundar Pichai is best known for his role as CEO of Alphabet and its subsidiary Google.

“It is important to follow your dreams and heart. Do something that excites you.”

The Co-Founder of Chinese retail site Alibaba, Jack Ma also has an interest in education and philanthropy.

“The very important thing you should have is patience.”

A politician and activist, Alexandria Ocasio-Cortez is the youngest woman in history to serve in the United States Congress.

An education activist, Malala Yousafzai is the youngest recipient of the Nobel Peace Prize.

“One child, one teacher, one book, one pen can change the world.”

Whitney Wolfe Herd is a self-made billionaire and the Founder of Bumble.

“Have a dream, chase it down, jump over every single hurdle, and run through fire and ice to get there.”

“I wanted to start a revolution, using art to build the sort of society I myself envisioned.”

Karl Lagerfeld is one the fashion industry’s most celebrated designers since reviving Chanel in 1983.

“I like to reinvent myself — it’s part of my job.”

As a retired soccer player since 2013, David Beckham works with leading brands, including Adidas and Diageo, alongside nurturing British fashion.

“Every situation has changed me as a person.”

Dame Helen Mirren is an international actress with a career that spans across stage, screen and television, winning a number of prestigious awards in the process.

“You write your life story by the choices you make. You never know if they have been a mistake. Those moments of decision are so difficult.”

Dame Judi Dench is regarded as one of Britain’s best actresses and is known for her versatile stage roles as well as her work in television and film.

“It is not good to cross the bridge before you get to it.”