The organisation aims to bring together the business community to address some of the most serious issues around the world. The “B”, Sir Richard assured the crowd, doesn’t stand for “Branson”.

In response to a light-hearted question from fellow B Team member, entrepreneur Radek Sali, Branson explained it was an exercise in humility – a contrast to The A Team, the renegade loners taking on crises all alone.

It’s an expression of the Team’s ideals – the world can’t be saved on one’s own. The organisation unites business leaders who aspire to a better world, using their collective experience and resources to drive change.

Last night, The B Team’s Australasian platform was officially launched at the offices of Perpetual Limited in Sydney. Founded by Branson and former Puma CEO Jochen Zeitz in 2012, the organisation’s success has seen regional divisions opened in Africa, South America and now the Asia-Pacific.

The organisation has a wide focus on social issues, but special mention was made of this week’s IPCC report. Branson described the revelation as “extremely disturbing, not just for our grandchildren and great-grandchildren, but for our children”.

But the IPCC’s grave climate predictions, and the miserable weather outside, did little to dampen the mood of the crowd.

Sir Richard and the other members of The B Team were in particularly high spirits, thanks to the infectious optimism behind the Team’s grand ambition. Not even the daunting commitments of Branson’s professional life dissuades him from working with The B Team.

“Time is precious for all of us,” he told the crowd. “If you feel passionate about something, you’ll always manage to somehow find the time.”

“Time is precious for all of us. If you feel passionate about something, you’ll always manage to somehow find the time.”

During the Q&A, the legendary entrepreneur recounted the birth of the organisation. It had been inspired by a group called The Elders, which involved amazing individuals like Kofi Annan, Nelson Mandela and former Taoiseach of Ireland Mary Robinson.

Branson’s work with The Elders eventually led to The B Team. It saw early success by encouraging government representatives to sign up to the Paris Agreement, and climate change has since been a key issue for Branson and other members.

Though the IPCC’s dire warnings were the most recent crisis to come to mind, The B Team’s focus touches on numerous issues. One example is an initiative concerning Future of Work – details of which are yet to be announced.

Lynette Mayne, Co-Chair of The B Team and a prominent figure in Australia’s business community, says she hopes to see individuals within the group pursue the issues most important to them.

“Some of our members have their own projects that they want to do,” she says. “That might be in mental health, for example. A couple of the members might say, ‘we’ll work on that with you’.

“I’d like to think that at least over the next two to three years, we do at least one project that each of the CEOs and chairs want us to do and support that.” 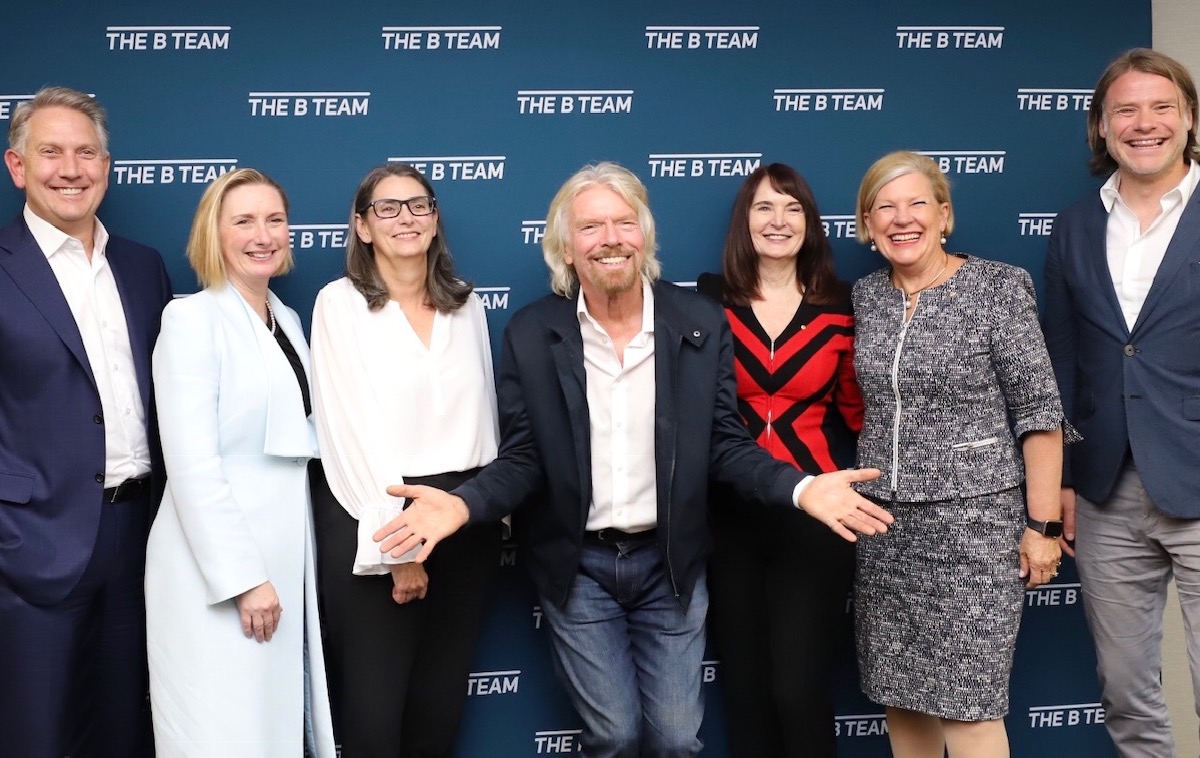 The ambition of The B Team goes far beyond the usual CSR initiatives of most companies. But that’s not all that sets it apart – it hopes to engage with policy-makers and stakeholders of all kinds.

Branson notes a certain hostility from politicians when the business community tries to get involved. But at the end of the day, he said, business leaders are people too, and can leverage enormous power to address social injustice.

“Businesspeople are mums and dads, grandfathers and grandmothers, and we appreciate the world just as much as politicians do,” he told the audience.

“I think the business community, working with politicians, working with civil society, can help the community get on top of some of the bigger problems of this world.”

For Mayne, it’s the right time to get involved. She believes social justice isn’t just a nice idea, but a necessity for the business community.

“I liked the agenda, that you had a group of global business leaders who cared enough to want to do something, more than just provide profit to the shareholder,” she says. “I’d always believed in my heart that I wanted to help others achieve their dreams.”

For his part, Branson doesn’t regret starting The B Team Australasia at all. That certainty was only confirmed when he first sat down to a meeting with the regional members.

“Setting up regional operations wasn’t necessarily universally accepted by the B Team globally,” he said, “but when I heard them speak, I thought, ‘I’ve done the right thing.’”