How Iris Apfel, 100, defies her age in the business world

The centenarian isn’t slowing down; in fact, she’s busier than ever.

When you think of bold owl glasses, cropped silver hair, stacks of chunky jewellery and glamorously eclectic outfits, only one character can possibly come to mind – the legendary Iris Apfel.

Celebrating her 100th birthday on 29 August, the self-proclaimed accidental icon and “geriatric starlet” is busier than ever. In fact, it’s the secret to her formidable success.

“I want to stay alive,” Apfel told The Wall Street Journal. “If I stopped working, I’d be gone.”

From being the oldest person to ever be made into a Barbie and children dressing up as her at Halloween to signing a four-year modelling contract when she turned 97, Apfel’s achievements have been as vibrant as her signature maximalist wardrobe.

“I work very hard. I think hard work is my medicine, my salvation.” – Iris Apfel

But the fashion model from a farm in Queens, New York wasn’t always a global style icon.

Starting in the world of fashion working as a copywriter at Women’s Wear Daily, it wasn’t until Apfel stepped into the entrepreneurial world in 1950 that her career really took off. She and her husband Carl established textile company Old World Weavers as an avenue to express the exotic and charming treasures they discovered on their international travels.

Apfel soon honed her eye for interior design, leading her to work on many high-profile projects including the White House (under nine presidents including Harry S Truman and Bill Clinton), the Metropolitan Museum of Art, Estée Lauder and Greta Garbo. The business ran until they sold the company in 1992, where it had become one of the most well-respected luxury textiles brands in the industry.

“I just love what I do,” Apfel once told L’Officiel. “I work very hard. I think hard work is my medicine, my salvation.”

Her passion for design started when she was just a child. From playing with her grandmother’s fabric scraps to being encouraged to explore antique shops and thrift stores across New York City, Apfel developed an appreciation for art, history and fashion, leading her to study art history at New York University.

Being a centenarian is nothing new to Apfel. Her mother, who despite being born in the 19th century graduated from university and went to law school, also lived to the ripe age of 100. Apfel’s husband Carl lived until just three days before his 101st birthday in 2015, after the couple had been married for 68 years.

Describing herself as “the world’s oldest living teenager”, many of Apfel’s greatest achievements have been made well into her later years, proving age really is just a number.

Iris Apfel: lessons from a centenarian 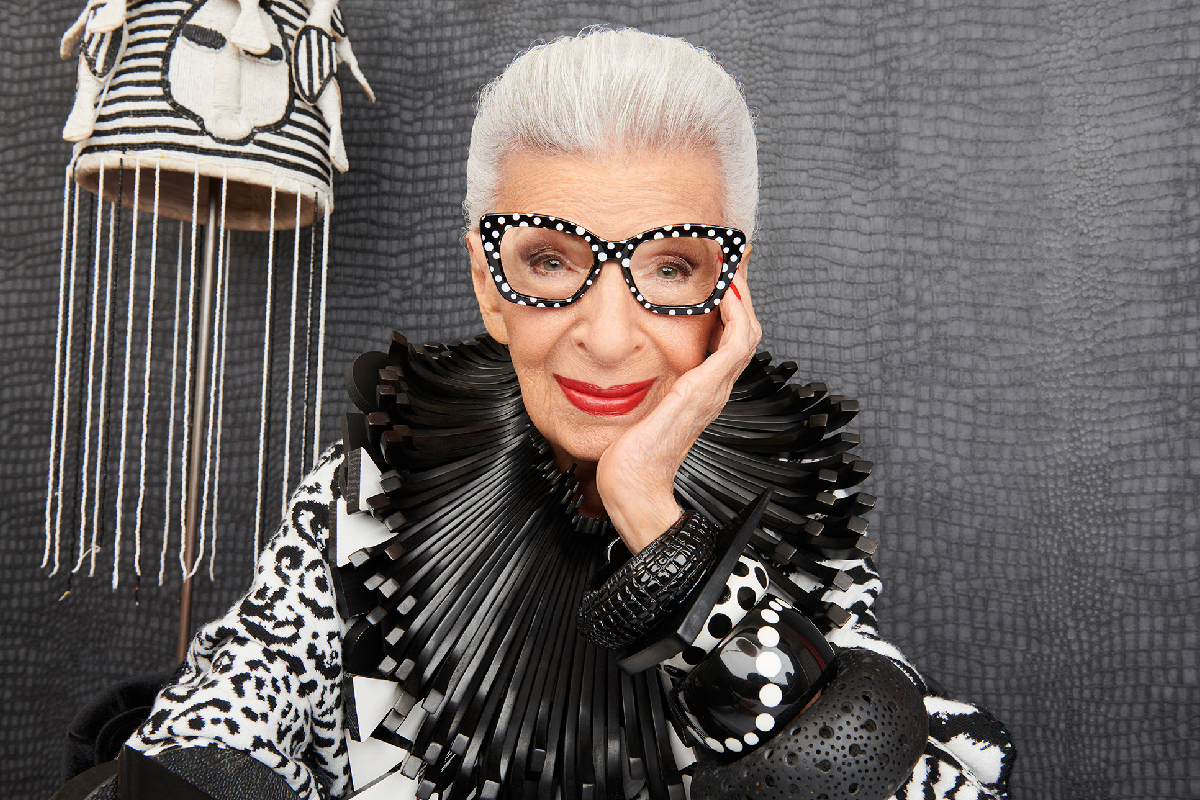 “My first big job in fashion came when I was 84, so as cliche as it is, age really is just a number to me,” she tells InStyle.

“Gettin’ old ain’t for sissies. You start falling apart, but you just have to buck up and paste yourself together,” she tells L’Officiel. “I say put your experience to work to give something back to other people.”

Do what you love

“Being passionate about my projects and putting my heart and soul into them has kept me young. That’s why I’ll never stop working,” she tells InStyle.

“I believe the old adage – you only fail if you don’t try. Taking any leap, whether it’s mastering a new skill, starting a new job, or embarking on an exciting new adventure, requires confidence,” she tells InStyle.

Travelling all over the world for work means Apfel leads a very busy lifestyle – but she insists her daily routine stays in place.

The designer ensures no matter where she is in the world, she starts her day at about 9am with a glass of freshly squeezed orange juice, warm cereal (oats or grits) and a skim decaf coffee.

“I think the best diet is to push yourself away from the table,” Apfel tells Bon Appetit. “I don’t believe in trends of any kind. I think they’re all cuckoo.”

“If you’re 75, nobody’s going to think you’re 32,” she tells The Sydney Morning Herald. “People who lie about their age are dopey. And getting carved up and trying to make your face look years younger is so stupid. Your hands are a dead giveaway.”

Reevaluate what it means to “have it all”

A busy travel schedule for work was one of the reasons she and her husband Carl didn’t have children because they didn’t want them to be raised by nannies.

“I don’t believe in a child having a nanny, so it wasn’t what we were going to do, but also having children is like protocol,” Apfel told the Guardian. “You’re expected to. And I don’t like to be pigeonholed.”

“I wanted a career and I wanted to travel so I didn’t have children,” she told The Sydney Morning Herald. “Sometimes I think I made a mistake and sometimes I look at friends and see how dreadful their children are and think I did the right thing.”

“Retiring at an early age is a fate worse than death,” she tells The Sydney Morning Herald. “Just because you are older doesn’t mean you have to stop living or working or roll up into a ball and wait until you pass on.”

“If you’re happy, have found love, are surrounded by good people, doing what you like and giving back to others, that’s success,” Apfel said. “Selling your soul for a buck is not worth the real price you pay – not to me, anyways.”

“It’s important to be original and true to yourself. People are so much the same these days when it comes to style, it can be so boring,” Apfel once said.

“I never tried to fit in … If you have to be all things to all people, you end up being nothin’ to nobody.”