Meet the 2019 CEO of the Year: David Hackett, CEO of MLC Life Insurance

CEO of MLC Life Insurance David Hackett is the winner of The CEO Magazine’s pinnacle CEO of the Year Award at the 2019 Executive of the Year Awards, held last night at The Palladium at Crown, Melbourne. During a glittering ceremony dinner held on 14 November at The Palladium at Crown, Melbourne, the Executive of the Year Awards again recognised and honoured the achievements of senior executives in Australia’s business sector, and their contributions to the greater wellbeing of Australian society. For David Hackett, CEO of MLC Life Insurance, it was an evening to be proud of after he took out the pinnacle award – 2019 CEO of the Year.

David says taking home the winning title was completely unexpected. “It feels quite surreal. It’s a great surprise so I am a bit overwhelmed by it actually,” he told The CEO Magazine on the night. “I thought, ‘Let’s have a go and see what happens’, but I never really expected to win it.”

He encourages others executives to “have a go” to be in for a chance at winning an award next year, and reflects that it’s about more than the recognition that comes with a win. “You get value out of the process,” he says. “It’s good to get a handle on who you are, what you stand for and what you’ve done. Throw it in the mix and you never know.”

David’s achievements in an underperforming insurance company as it was cut loose from its parent company in 2016 are nothing less than formidable. He took the reins as the company set out on its own in a heavily scrutinised – and publicly criticised – industry that was grappling with a sluggish economy.

In the financial year to 31 December 2018, MLC Life Insurance recorded a 68% improvement in after-tax profit of A$71 million on the previous year, due to a revenue increase of A$21 million and operating cost reductions of A$54 million. Return on equity spiked from 2.1% to 3.5%, despite heavy regulatory oversight and industry disruption.

This turnaround came despite David having to steer a company-wide transition from legacy systems inherited from parent company NAB to a new structure, corporate culture and strategic focus on its customer base.

David attributes this remarkable turnaround to his executive team, who stood firm together to ensure this cultural and strategic transformation endured and flourished.

“You can’t be a leader without followers, so you need to engender a followership and to do that you have to genuinely connect with people and be authentic.” – David Hackett

The executive team led the company’s 1,800 employees through a difficult transition to a customer-centric vision that required significant changes in roles and reporting lines, operational changes and technology transitions.

“You can’t be a leader without followers, so you need to engender a followership and to do that you have to genuinely connect with people and be authentic,” David tells The CEO Magazine. “There is no formula to it. You have to really connect with people and leverage that connection to take a whole bunch of people in the same direction to try to achieve something together.”

The past year saw the introduction of the Sanagi program – a A$600 million technology transformation that will replace every piece of technology infrastructure in the company by 2021. When completed, MLC Life Insurance will be a fully digital company focused on customer interaction and performance. 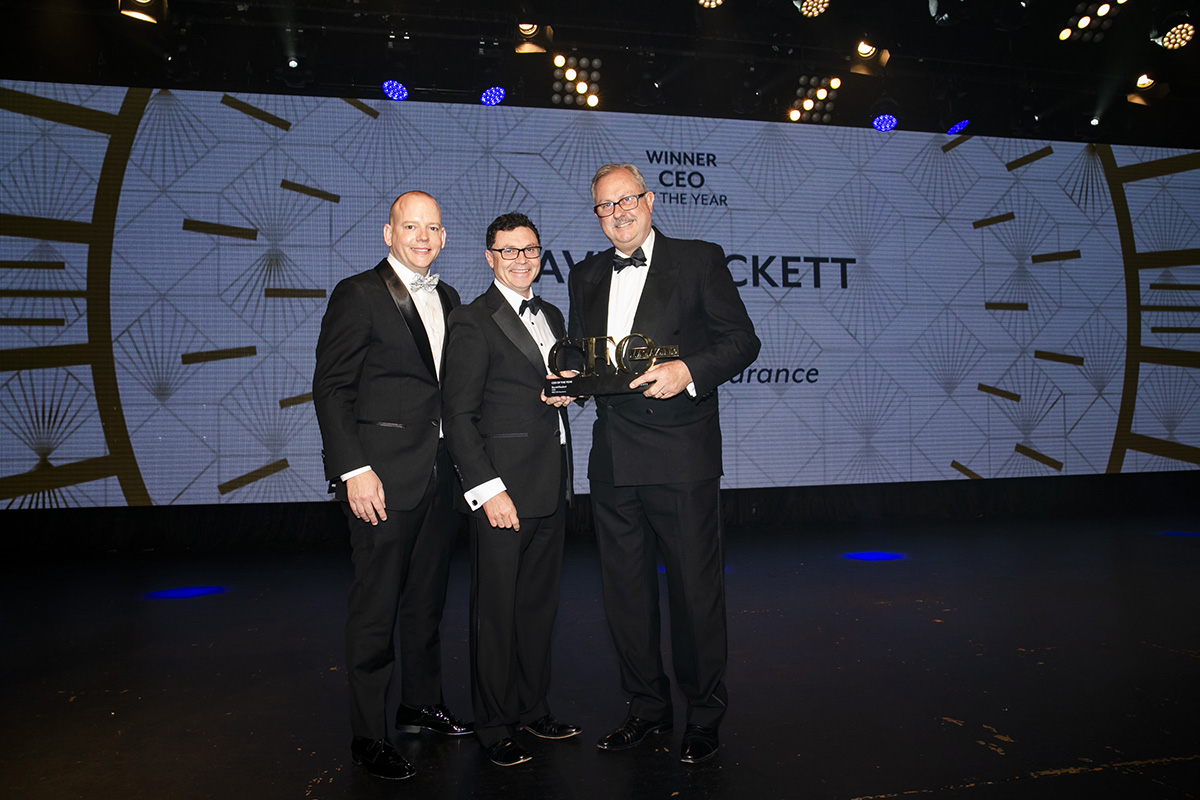 Chris Dutton of <em>The CEO Magazine</em> and Glen Sealey of Maserati Australia present the CEO of the Year Award to David Hackett.

David considers MLC’s renewed focus on customer satisfaction as a driving factor in the company’s financial success. He can boast the second-highest retention rate in the industry in 2018, and a much-improved claims experience for customers due to new management software and the efforts of employees in assisting claimants to navigate what is often a difficult period in their lives.

Since MLC Life Insurance separated from NAB in 2016, it has had to navigate significant legislative and regulatory change at the same time as finding its own feet in a tough and drifting insurance market. Yet, its inaugural CEO and his team have inculcated a new cultural sensitivity that has nurtured a company-wide ethos of inclusivity and ambition.

“I’ve been fortunate to bring a talented executive team that fuses deep insurance knowledge with experience from outside sectors. The credit for the cohesion of the business is shared by us all.”

David brings considerable expertise to the role of CEO. His career spans 30 years in finance, starting as an auditor with Touche Ross (now Deloitte), followed by the role of Chief Accountant at Deutsche Bank Australia for several years. In 1998 he ventured to Japan as CFO of UBS and spent years in that country, gaining invaluable experience in Japan’s financial market, eventually taking the role of CFO at Aozora Bank, managing its IPO on the Tokyo Stock Exchange.

He returned to Australia in roles at NAB, and was selected as CEO Elect of MLC Limited, the joint venture between NAB and Nippon Life Insurance Company, where he oversaw the creation of MLC Life Insurance.

“Exceptional leaders focus on developing people,” says David. “They measure their success by the success of the people they lead. They bring their whole selves to the task of leadership and stay true to themselves and their values through times of challenge. They are humble and human, with an inner drive that means they stay strong, calm and focused, and connect to their people and stakeholders at all times.”

David has insisted on developing a creative and friendly work environment. He is a Gender Pay Equity Ambassador and established a Diversity Council at MLC Life Insurance to ensure a more inclusive workplace.

The 2019 CEO of the Year Runner-Up was Fiona Johnston, CEO of UM Australia, and Highly Commended went to Anthony Nantes, CEO of Wisr.

View the full list of winners in the 2019 Executive of the Year Awards.