It split the masses with its provocative front end, so we asked the Head of BMW Design about the philosophy behind the latest version of the brand's most iconic sports car. 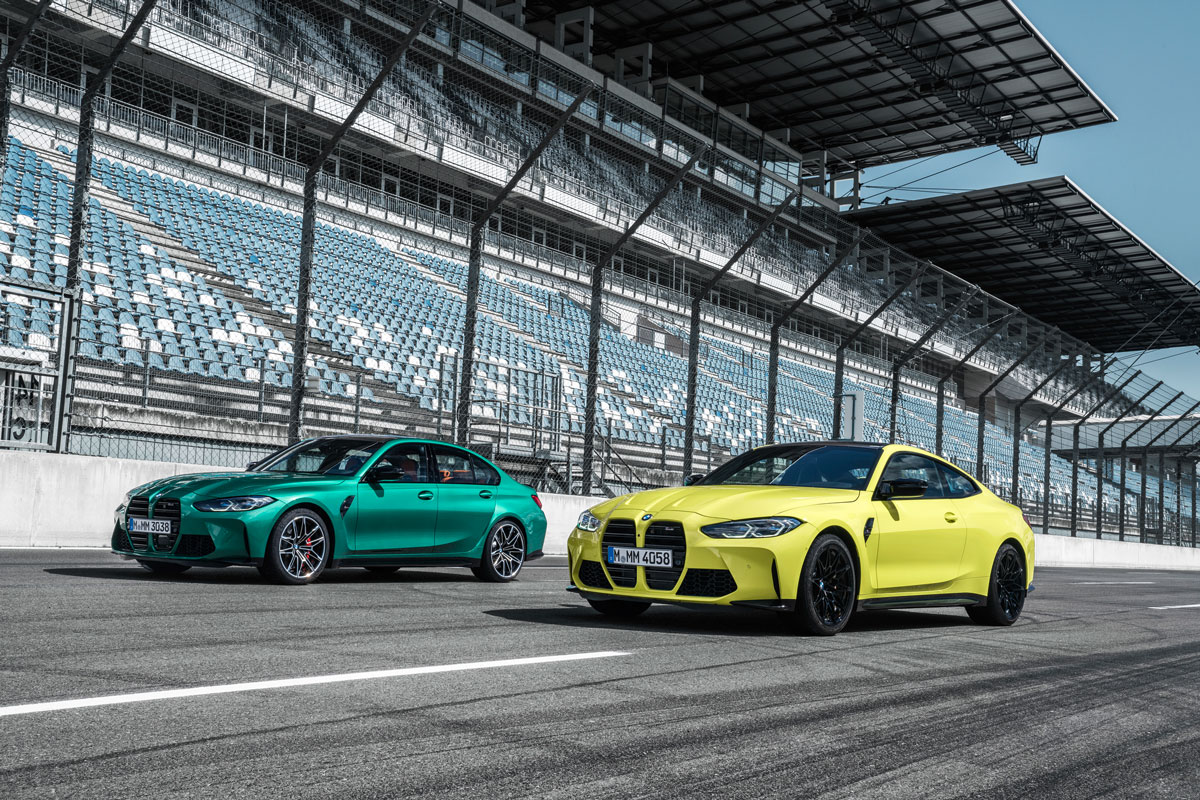 There was plenty of controversy when BMW unveiled its latest 4 Series model, with a divisive front nose designed to usher in a signature new look. Purists weren’t keen on the fresh kidney grilles while contemporaries applauded the German carmaker for daring to be different.

It was no surprise then that the arrival of its performance-focused 2021 BMW M3 sedan and M4 coupe would attract the same level of polarity. Everything on the Bavarian carmaker’s latest M cars are larger, from the wider vented fenders to the pronounced rear diffuser. And of course, the kidney grilles which now extend the full width of the front face. The subtleties of yesterday’s M-branded cars appear to be long gone, but there’s more to driving thrills than just a controversial new face, explains the Head of BMW Design, Domagoj Dukec.

The designer exclusively told The CEO Magazine: “We want strong characters for all our cars. The new M3 and M4 are about really making a statement and being unmistakably just BMW M – powerful and agile.

“We wanted to express this through supreme dynamics and an emotionally rich design. We believe that M3 and M4 deserve such an extreme look because it’s also our core of M and where everything started.” 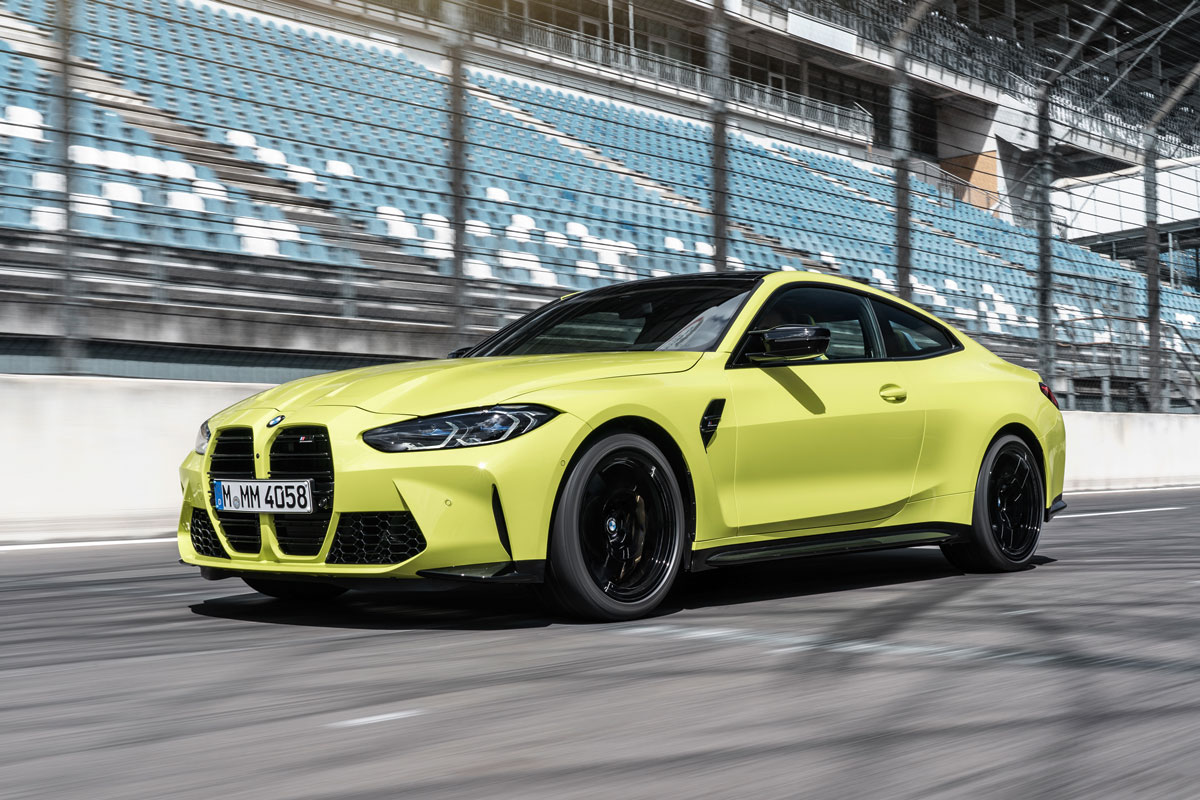 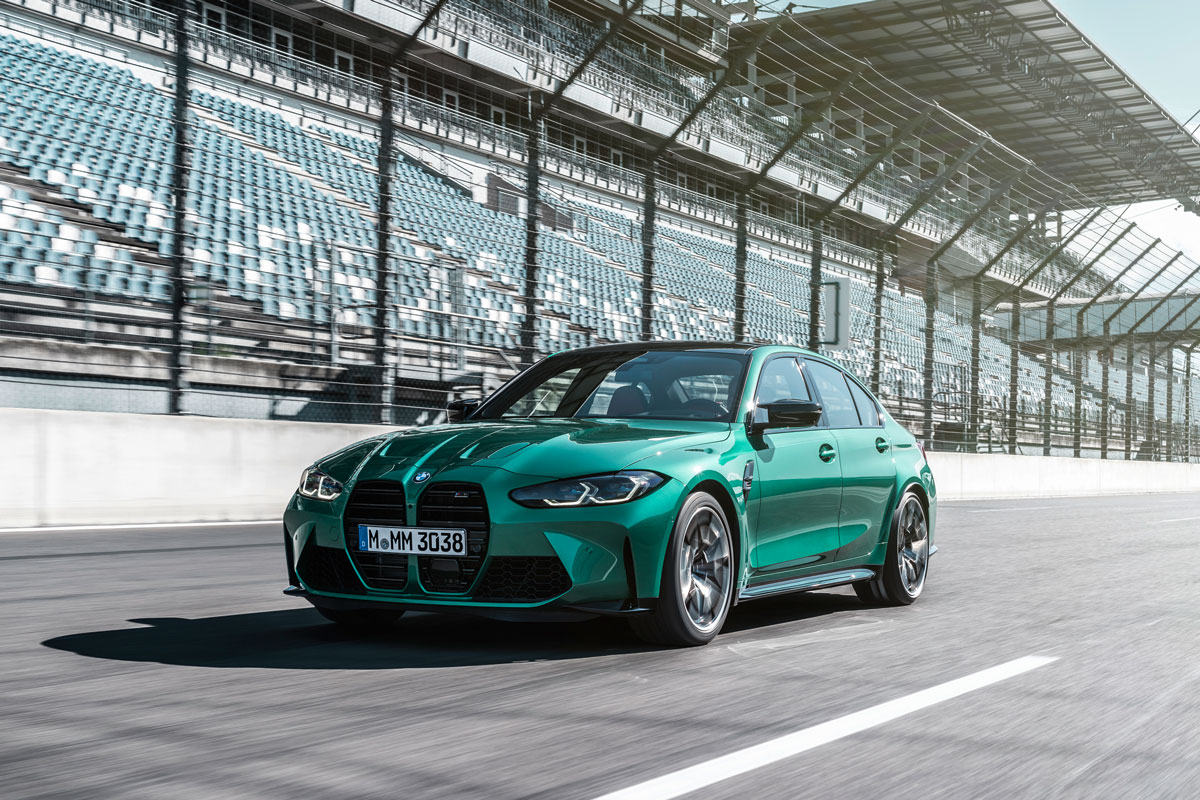 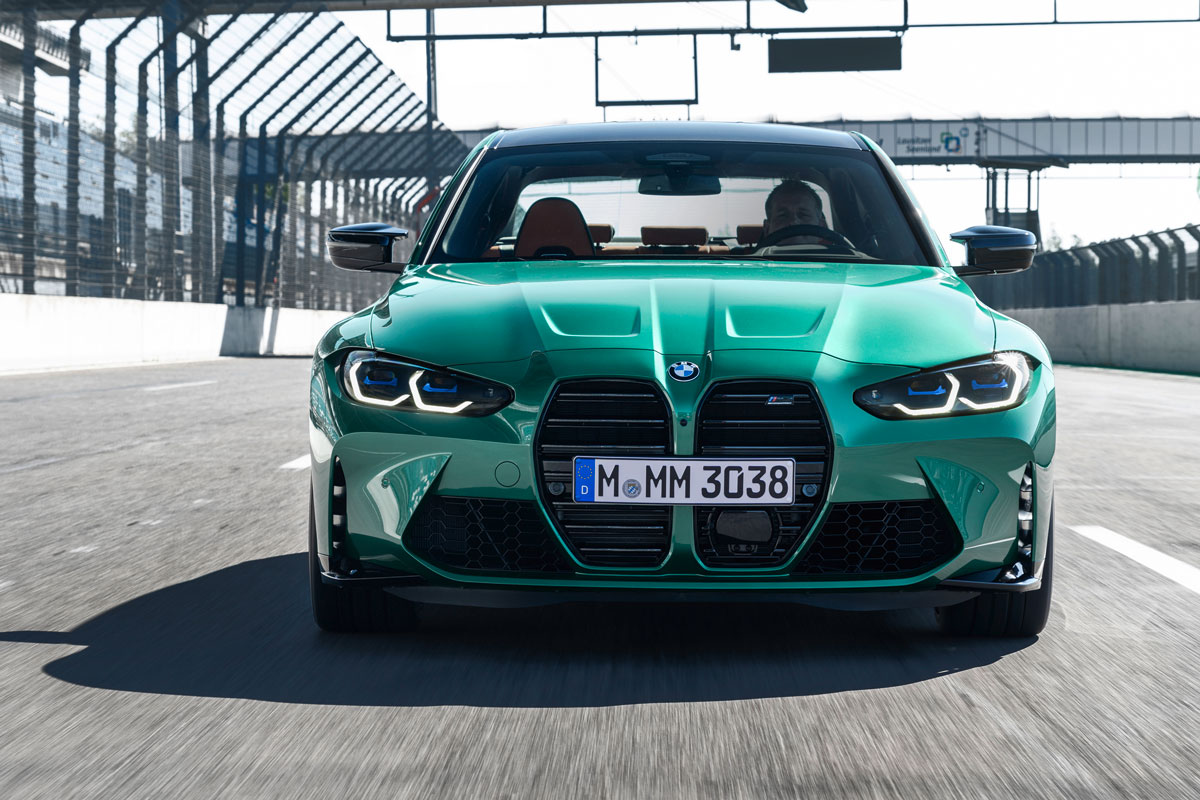 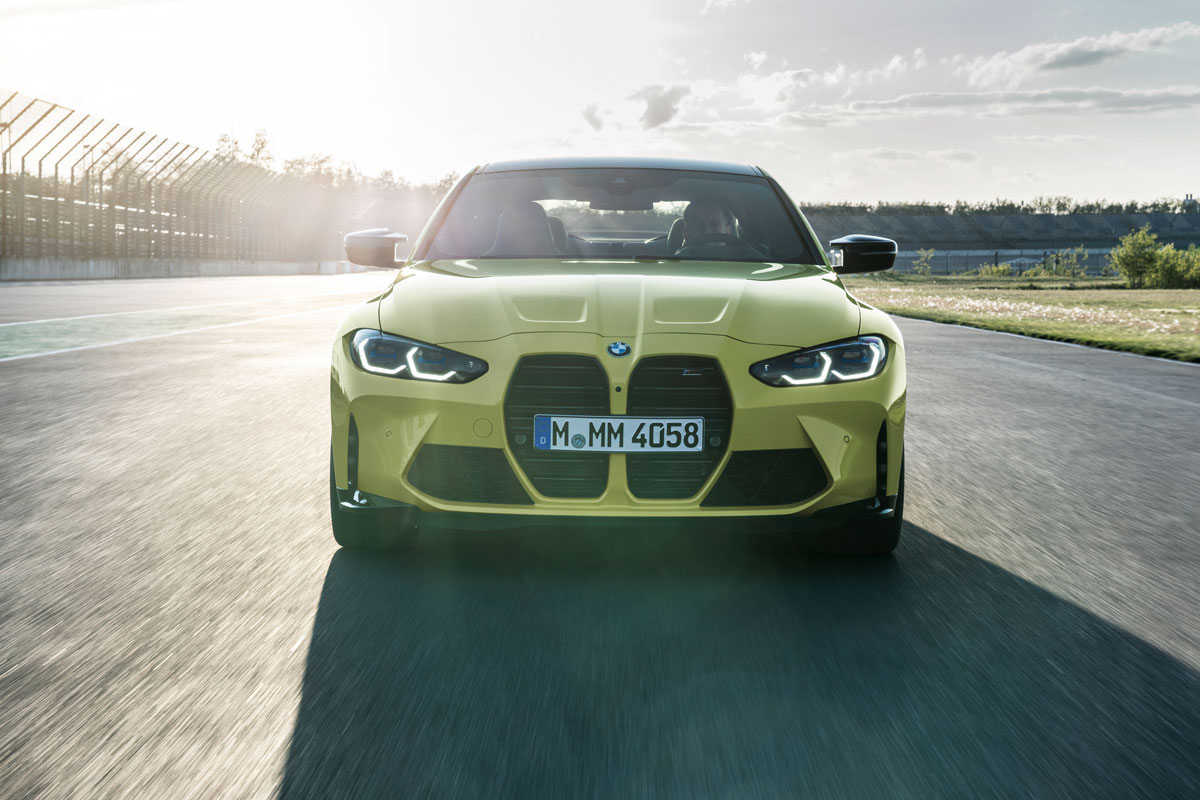 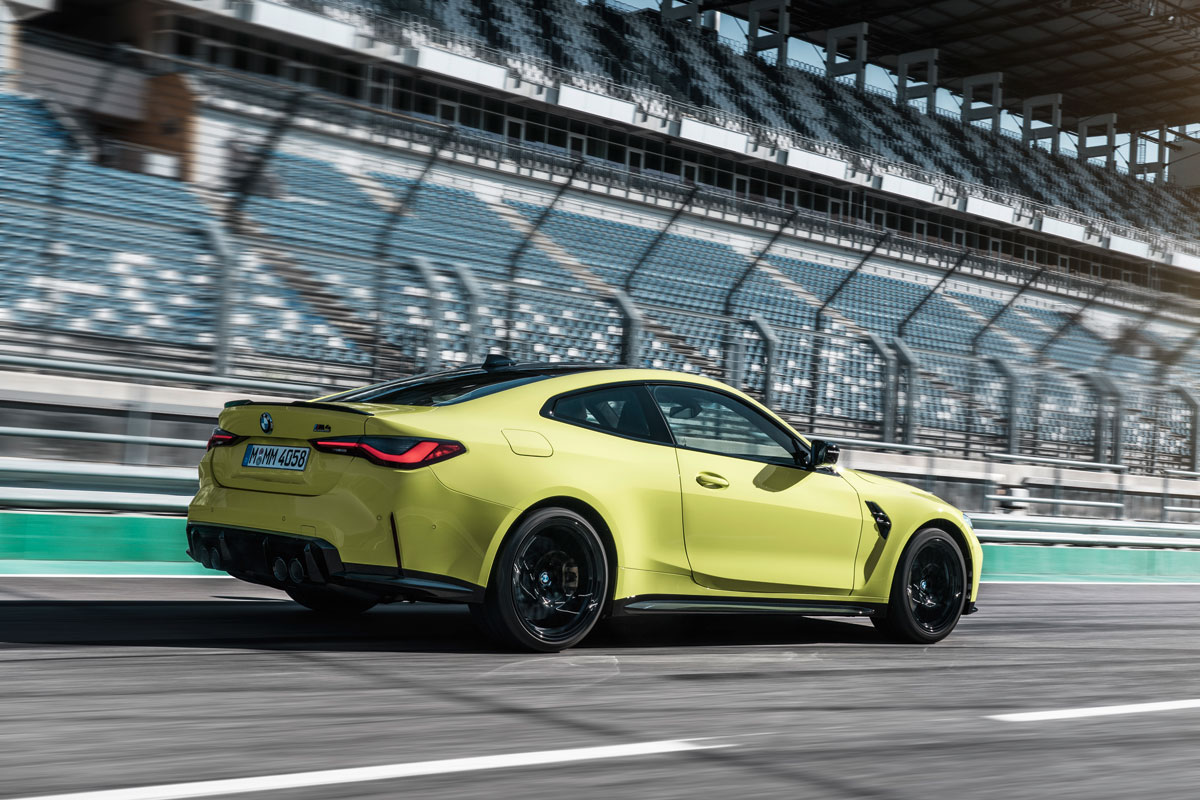 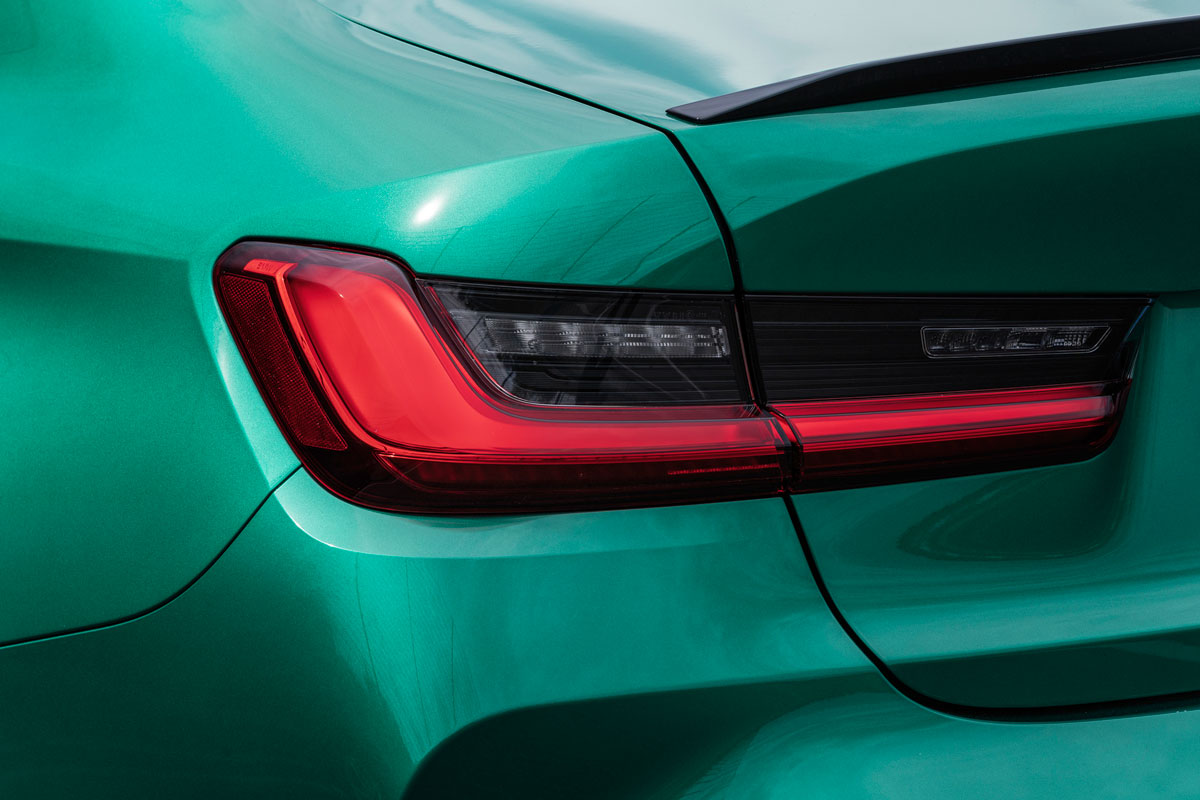 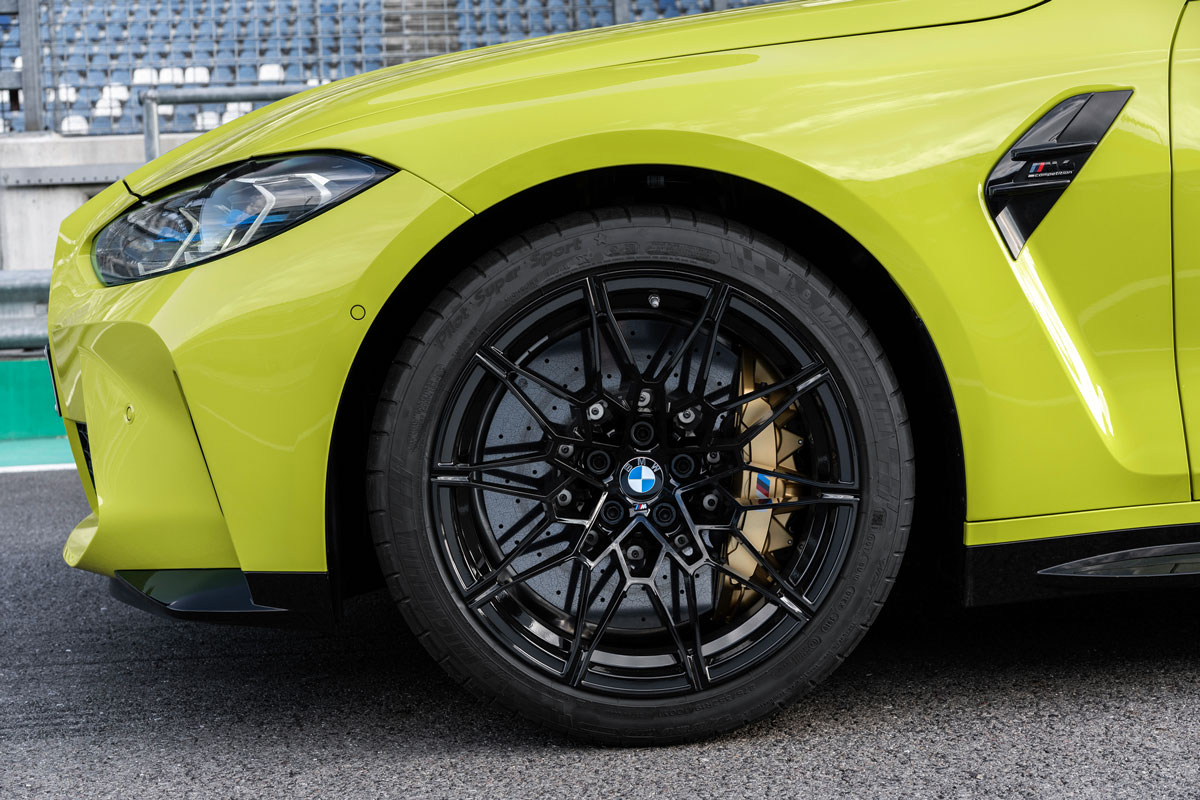 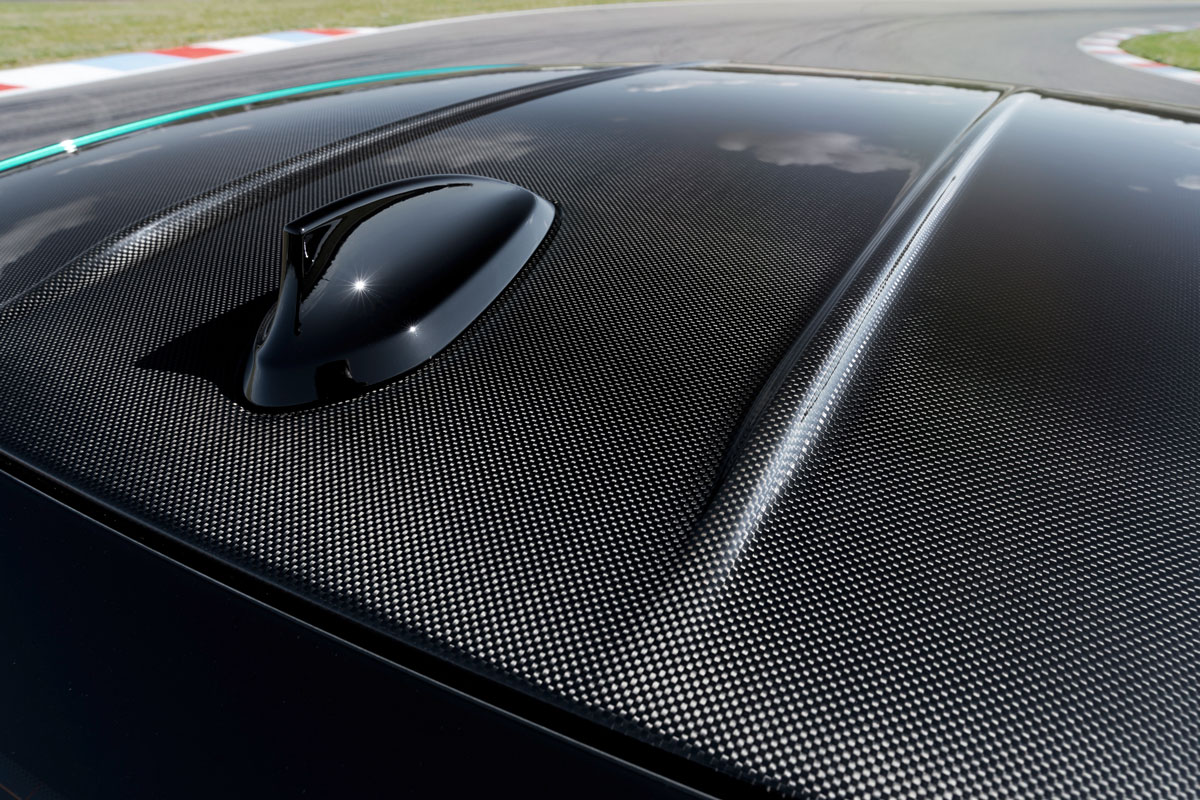 Understated aggression has been the underlying aesthetic of past M cars and the latest duo take an even louder approach to this expression.

“The M3 and M4 are instantly recognisable as an M. It just takes one glance,” says Dukec.

The four-door M3 and two-door M4 feature heavily sculpted body lines from every angle. Enhancing the performance aesthetic further is a carbon-fibre roof and rear lip spoiler on the Competition-spec models. Adding a sunroof will switch out the lightweight roof for a heavier steel version. Three new exterior colours also join the BMW portfolio: Isle of Man Green metallic as seen on the M3, Sao Paulo Yellow as seen on the M4, and Tornado Red metallic.

Other design touches include black side skirts, M-style mirrors, flared arches and a quad-tipped sports exhaust system which blends seamlessly into the diffuser. Customers can also option more carbon fibre via the M Carbon Package, which takes the aggression to another level with M Performance Parts.

Addressing the car’s controversial aesthetics and potential as a future classic like some of its predecessors, Dukec truly believes that this is what customers are looking for because they look for status.

“They want to stand out. The M cars set out not to please people but to move them – physically and emotionally – at a profound level.

“You can’t plan to design an icon with a cult status. You can try to give a really distinctive look to your product that’s not like the mass of products on the road. And then, with time, it will be so remarkably different. This is how a product develops a certain status.

“The BMW M3 and M4 Coupe and Convertible hold a very special fascination for me. They open the door to a broad spread of models and always set the benchmark for dynamic potency in their segment.

“Their emotionally charged design is rigorously function-driven, pure-bred and stripped back without compromise. At the same time, it allows customers to experience the respective vehicle characters on an emotionally powerful level.”

Time will undoubtedly tell if Dukec’s predictions will pay off. 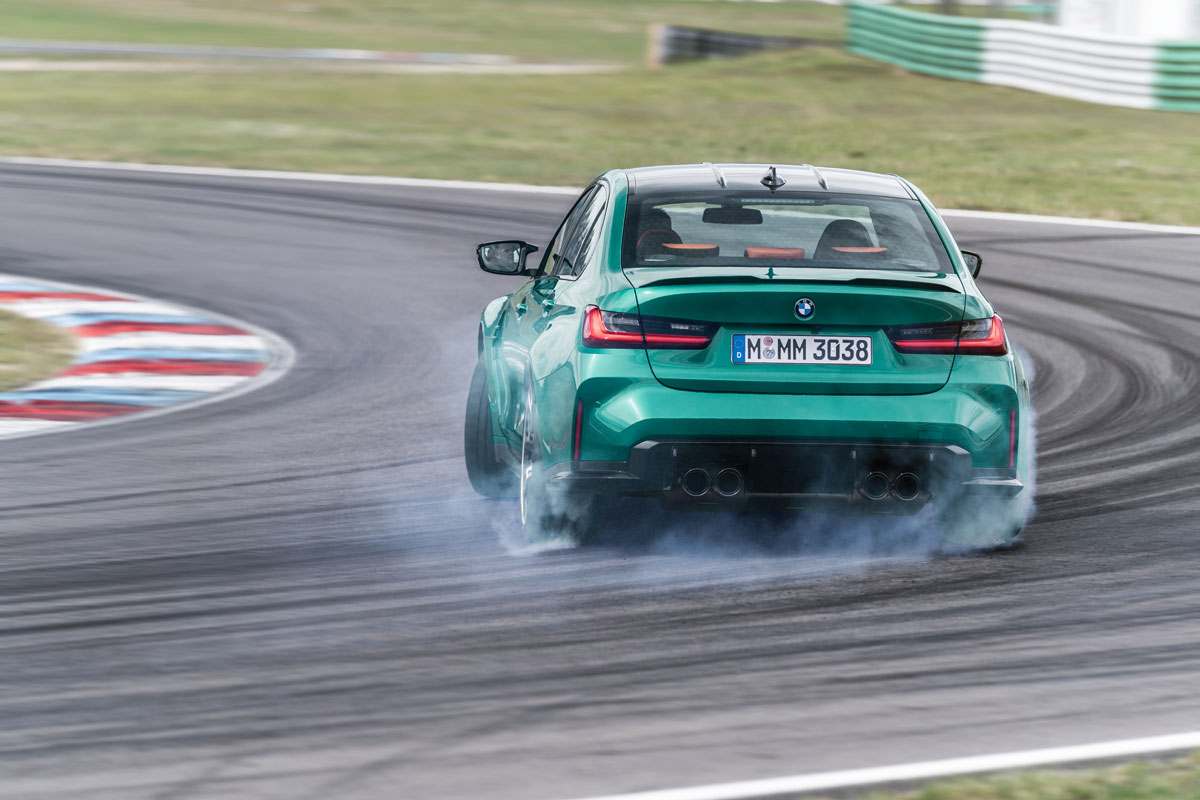 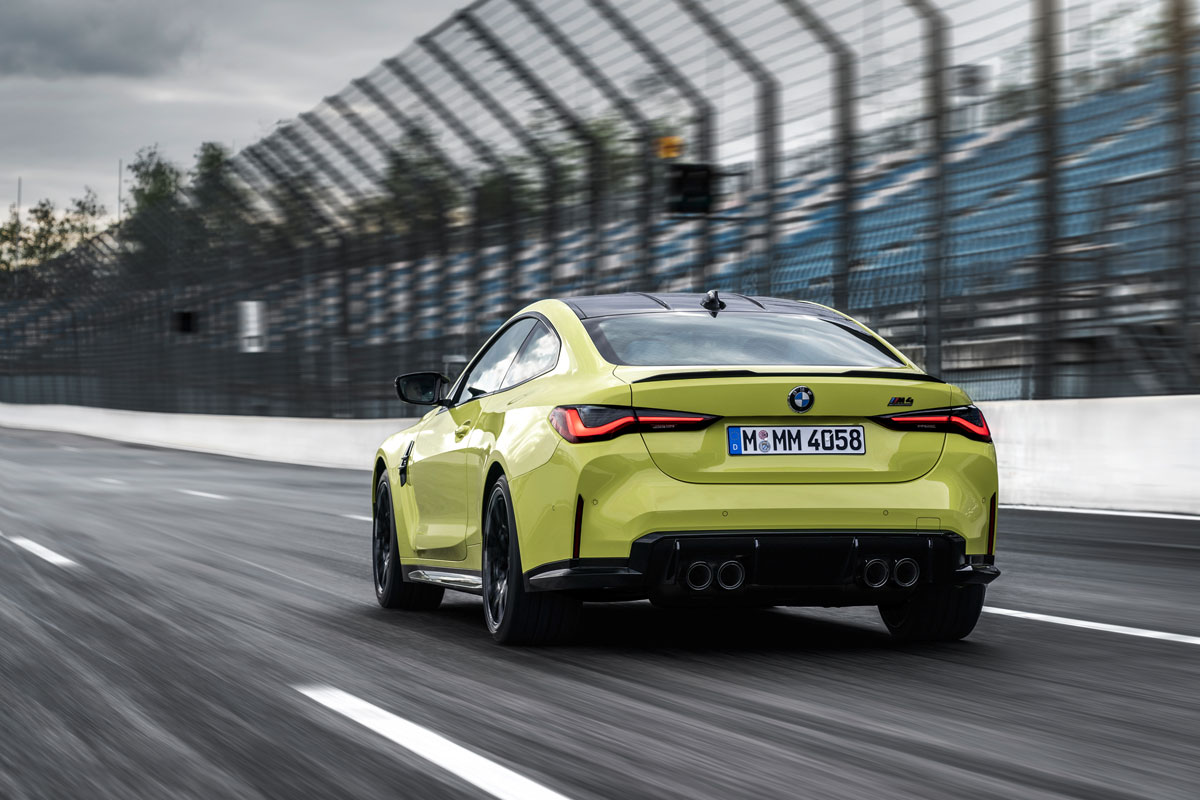 At the heart of both the M3 and M4 is a 3.0-litre twin-turbo inline-six engine which is shared across the X3 M and X4 M SUV models.

The base M3 and M4 models deliver 353kW of power and 550Nm of torque through a traditional six-speed manual transmission accompanied with automatic rev-matching and a rear-wheel-drive layout which can also send drive to the front if slippage is detected. Drivers can choose to turn this feature off to keep it in rear-wheel drive. That’s enough power to see both cars reach 0 to 100km/h in 4.1 seconds.

Customers demanding more performance can opt for the Competition-spec models which bump power up to 375kW and 650Nm of torque. To handle the increased performance, the Competition M3 and M4 receive an eight-speed M Steptronic automatic gearbox which also sends drive to the rear. The result is a quicker 0 to 100km/h time of 3.9 seconds.

All-wheel-drive variants of the M3 and M4 Competition will also join the model line-up towards the end of 2021.

Ride quality and driver engagement of both models are looked after with a host of suspension components including adaptive dampers, M-tuned suspension, a limited-slip differential and an advanced braking system which can switch between two modes depending on driver preferences. Meanwhile, driving modes include Road, Sport and Track to optimise the car’s dynamics for each situation. Drivers can also preset their own driving mode preferences onto two red buttons attached to the steering wheel.

There’s also an array of bracing throughout the car to ensure that the handling prowess matches the significant power output.

A bold and versatile interior 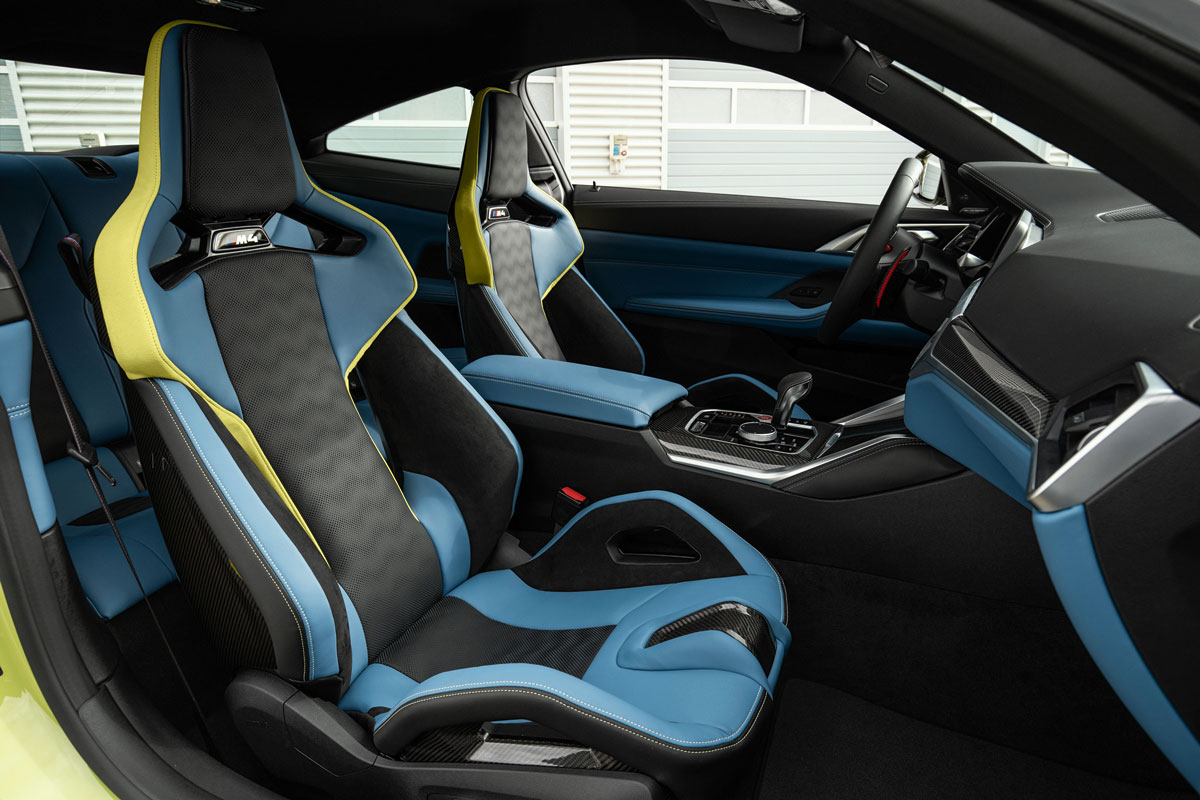 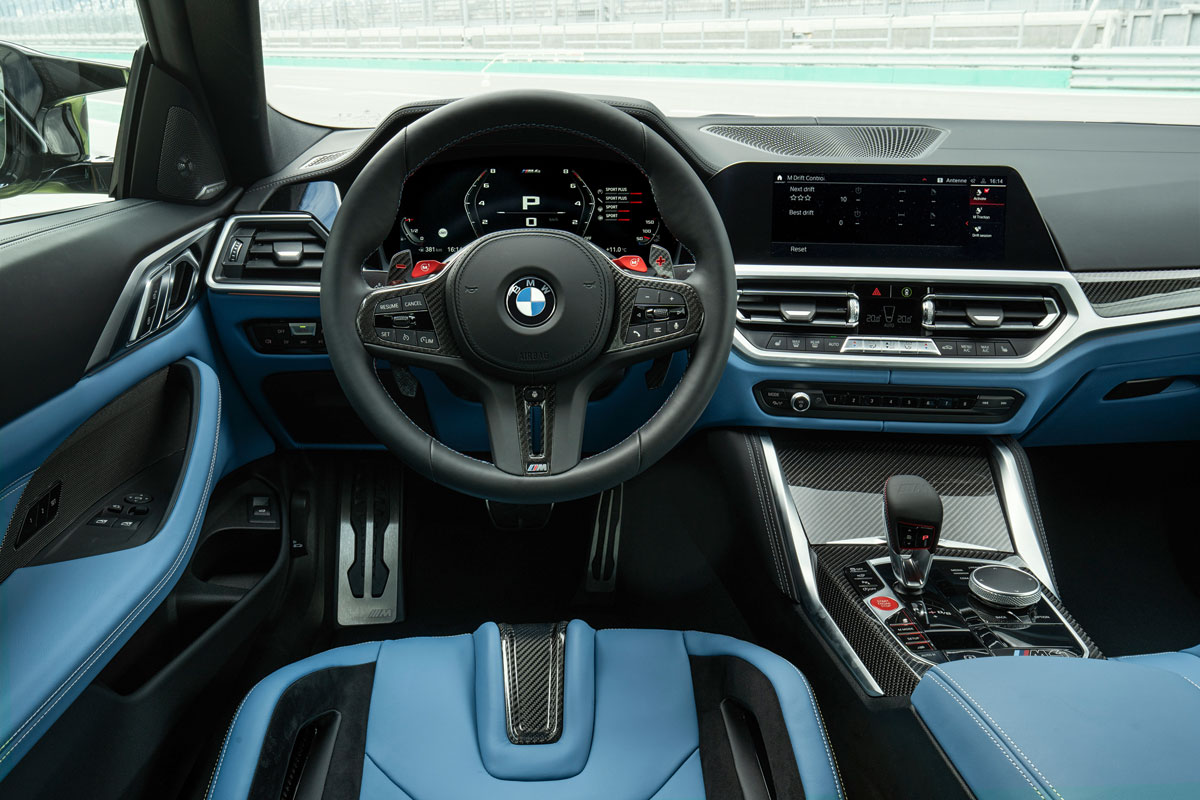 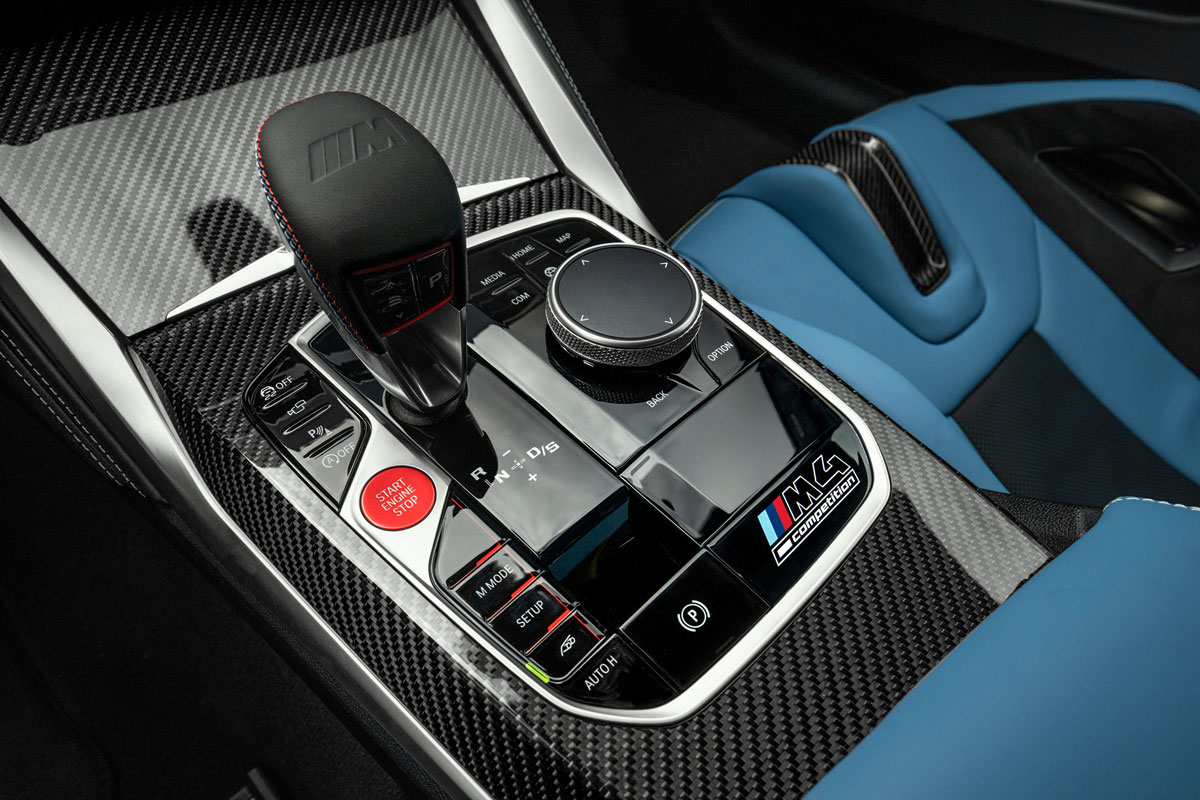 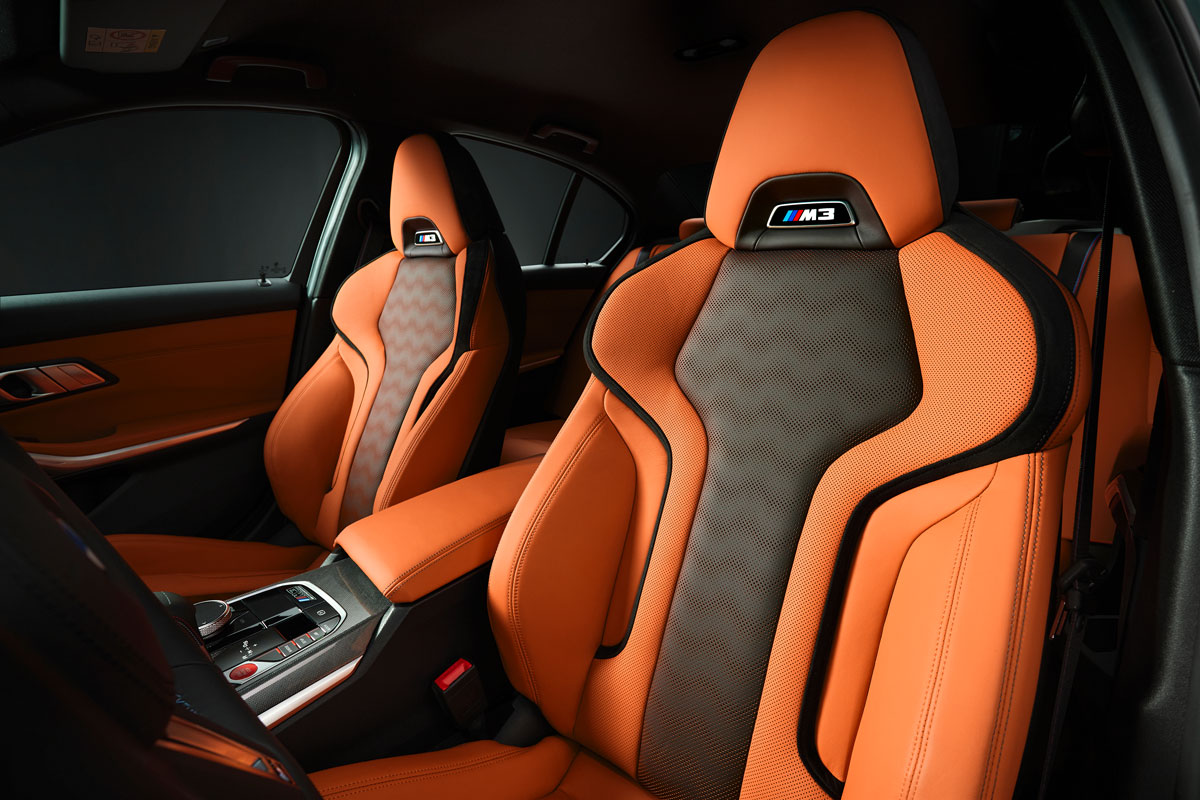 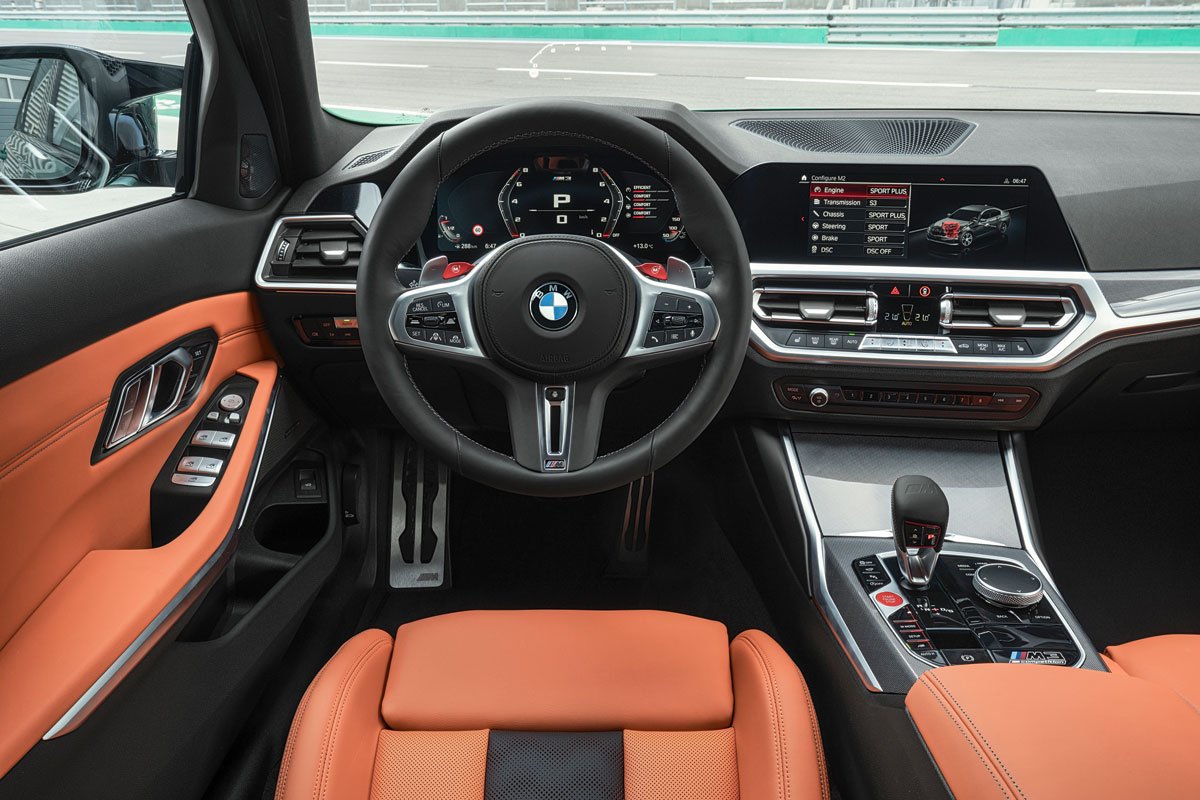 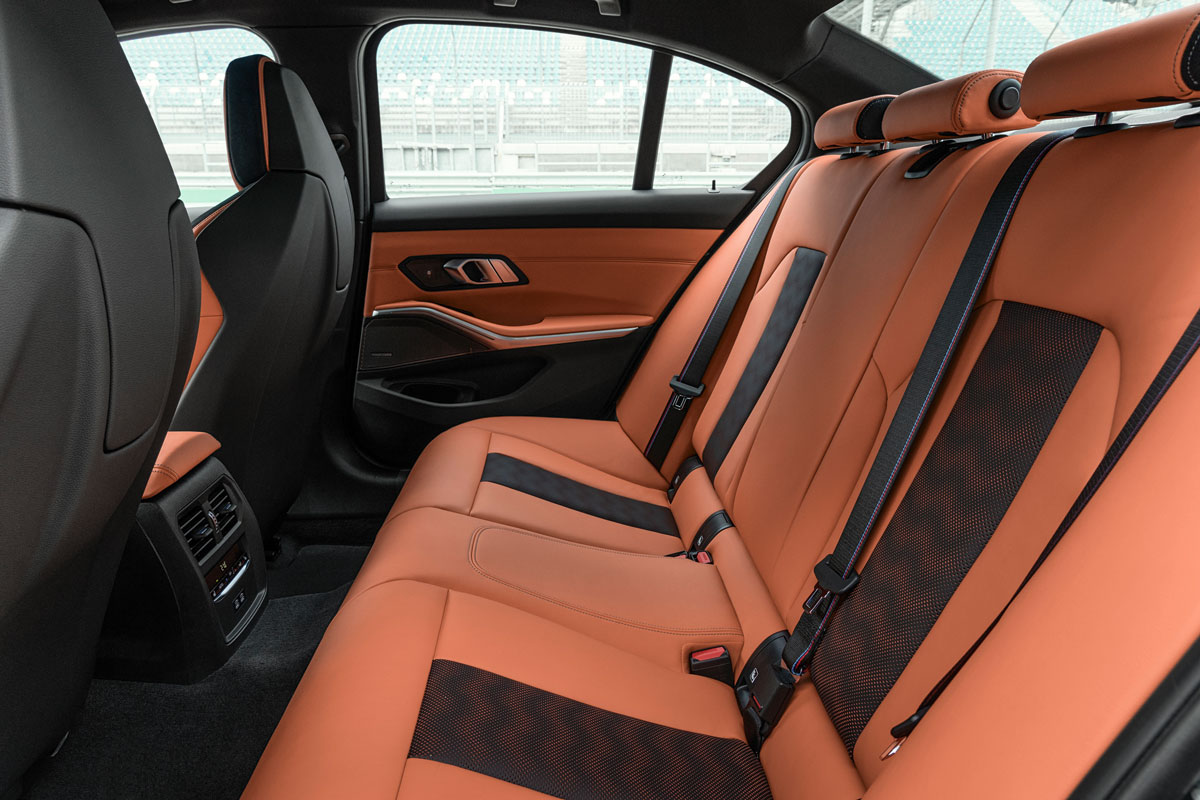 Accompanying the vibrant exterior are the striking interior colour options for the new M3 and M4. The M3 can be optioned in Kyalami Orange while the M4 receives a Yas Marina Blue. Seat options include M Sport seats trimmed in Merino leather as seen in the M3. The M4 shows off a more track-focused M Carbon bucket seat combination complete with illuminated badges, removable headrests and pass-through gaps for harnesses.

On the safety front there’s the standard BMW suite of adaptive cruise control with stop-and-go, lane assist, lane departure warning and cross-traffic alert for the front and rear. One key feature worth mentioning is the latest M Drive Professional software system installed on the M3 and M4 for the first time. It basically handles track driving duties by giving the driver greater control over traction alongside an M Drift Analyser and M Laptimer to provide dynamic telemetry.