Bathurst race track in a Ferrari? Don’t mind if we do. 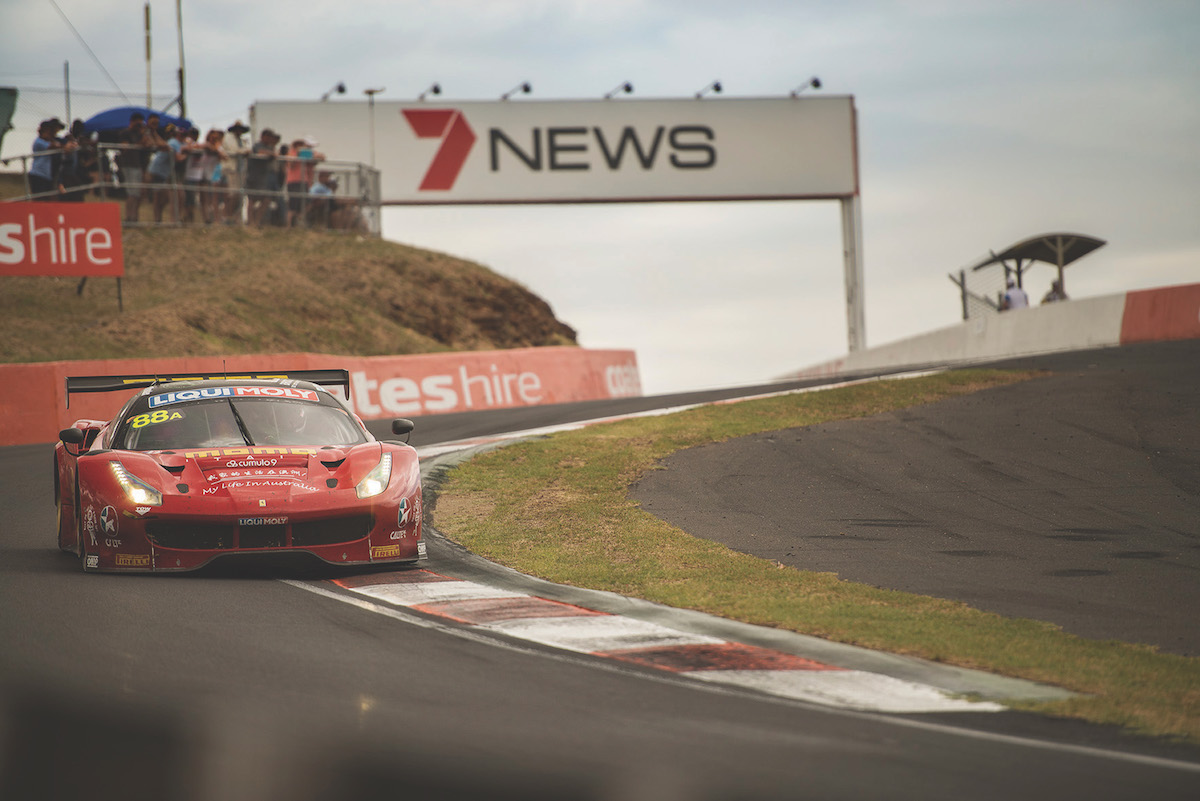 Pretty much every sport is a lot harder than it looks on television, even lawn bowls, but it’s the potentially deadly ones that really raise the bar, and your heart rate, when it comes to trying them yourself.

Watching the in-car footage of vrooming V8s belting around the Bathurst 1000 every October has always been a jaw-dropping spectacle, and one that creates a certain amount of awe at how the drivers (and the late, great Peter Brock in particular) do it. Who wouldn’t want to have a go at replicating their feats of derring-do, particularly in a Ferrari? 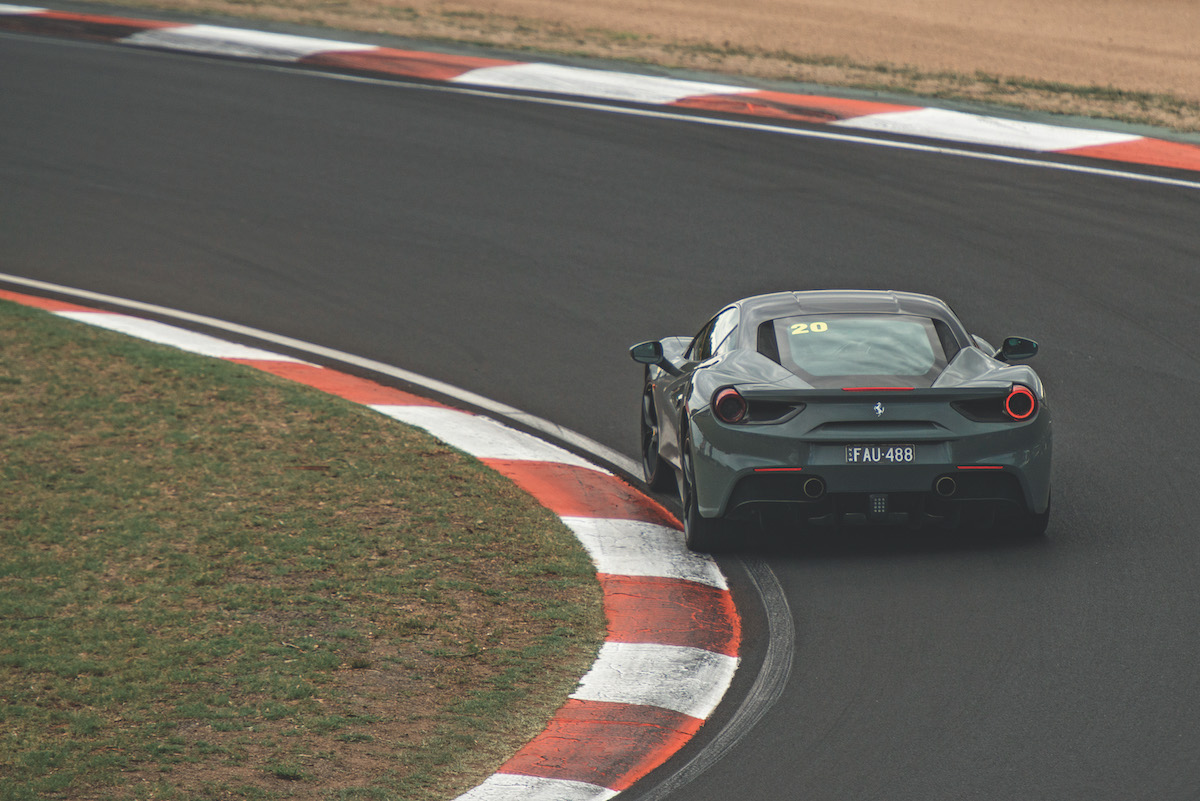 That’s what a few lucky Prancing Horse owners (and a few even luckier journalists) get to do every year when the legendary Mount Panorama circuit is closed to the public for the Bathurst 12 Hour race, and it turns out to be an experience that’s almost more fear than fun.

The Mountain is no ordinary track and even race drivers will admit there are parts of it that are genuinely frightening. Most days of the year it is a public road, climbing 174 metres from the Main Straight to its highest point, Skyline. On race days it booms and brays to the sound of engines straining to push beyond 300km/h.

While the bottom half resembles a normal race track, with lots of run-off and gravel traps to catch your stuff ups, the top half is like very few circuits on earth; a concrete canyon of blind corners and bluff walls that leave no margin for error and plenty of potential for crushing impacts. To this extraordinary place we have brought one supremely special car; Ferrari’s 488 GTB, a thing of fluid and fabulous beauty that is capable of feats of speed that boggle the brain.

We have brought one supremely special car; Ferrari’s 488 GTB, a thing of fluid and fabulous beauty that is capable of feats of speed that boggle the brain.

With its twin-turbo V8 producing a whopping 493kW and 760Nm, the Ferrari 488 GTB can explode from a standing start to 200km/h in just 8.3 seconds (a mere 100km/h disappears in three seconds flat) and on to a top speed of 330km/h. Theoretically, I should be able to lap the track not much slower than the V8 Supercars that blitz this circuit for The Great Race each year. Theoretically. The reality is that a giant, impenetrable and genuinely tangible wall of abject fear stands between me and those sorts of feats.

During the first couple of laps my eyes were so wide it felt like my eyelashes were fluttering the back of my neck. That would have been alarming enough, but I was more concerned about my inability to breathe, despite which I somehow found the oxygen to expunge swear words, loudly and repeatedly.

Yet, thanks to years of televisual feasting, it all feels familiar, and the initial climb up Mountain Straight, during which the Ferrari leapt effortlessly beyond 220km/h, is great fun, but once you turn into The Cutting – a concrete corkscrew of tight bends – you realise that you can’t see through the corners,
at all, and that committing to them is an act of faith and foolhardiness.

Top of the Mountain

The flight across the top of The Mountain is even scarier, because it’s faster, and there’s a point at the Reid Park section where you have to place your car right near the wall (I’ve seen race drivers rip the wing mirrors off their cars here, they get so close to it) to line you up for the run into Skyline. Doing so feels like a complete defiance of sanity. 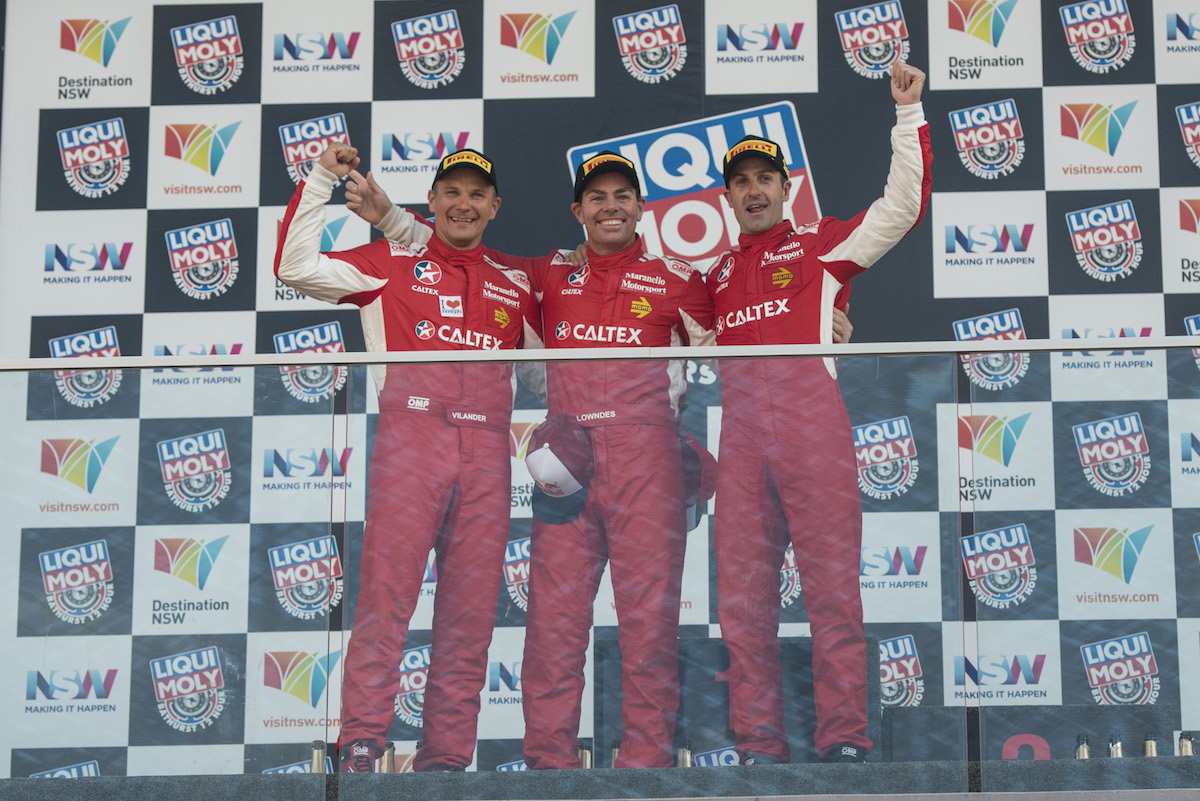 And yes, The Esses section, where you dip sharply back down the hill, looks steep on television, but in reality it’s much worse than that. Picture the kind of mountain pass where you’re usually stuck behind slow trucks and faced with 25km/h advisory signs and you’re part of the way there.

That scary section ends at Forrest’s Elbow, which is named after a motorcyclist who scraped his elbow off here, before you hit the famous Conrod Straight, all 1.9km of it. This epic stretch opens up, tantalising you with the chance to explore 300km/h, but what you don’t see on TV is how huge that big hump is three quarters of the way along – a climb that makes you feel like you’re actually going to get airborne at 280km/h-plus. And that the result of doing so would be your fiery death.

Racing drivers keep it pinned through here, and thus explore that rare air beyond 300, but my brain simply refused, insisting that I dab the brakes, and keep myself alive. The final chicanes and bends that lead up to the Main Straight are pure, fast fun, however, meaning you finish each lap with an enormous smile on your face.

What made the whole experience more magical than terrifying, in the end, was the Ferrari 488, which is so superb to drive – fast, firm, precise and beautifully balanced – that it put the minimum gap between thought and action, which is what you need at high speeds. It’s hard to imagine any other road car feeling as comfortable in these extreme circumstances.

Lapping The Mountain at speed was unforgettable, and only served to grow the enormous respect I have for racing drivers. I’ll be watching this year’s event with freshly widened eyes. Getting around Bathurst without hitting any walls is some achievement, but doing so while battling other cars, and drivers, is the kind of sporting genius that’s clearly beyond mere mortals.

Hosted at perhaps the only track more truly terrifying than Mount Panorama, the Nürburgring, or Nordschleife, in speed-mad Germany, the 24 Hour attracts a slightly ridiculous field of 200 cars, and more than 700 drivers, in May each year. Only the fact that the track is some 25km long makes those figures possible, but pure chaos is still the result. And the massive crowds that turn out each year wouldn’t have it any other way.

First held in 1929, this is perhaps the world’s most famous motorsport event and, like Bathurst, it is held on a public road that’s repurposed once a year, in May, for an extremely dangerous race set between concrete walls and steel barriers. Formula 1® cars somehow manage to average 240km/h around each highly technical and hugely difficult lap. With its harbour and super yachts, Monaco is undeniably one of the most beautiful settings for a car race, anywhere.

The 500 refers to miles, which is a very long way to race, particularly around a banked oval circuit that looks, at first, pretty easy, until you consider that the cars average well in excess of 350km/h, and run into each other with horrific regularity. Held each Memorial Day weekend
in the US, it is a huge event,
with a crowd that has exceeded 350,000 people.