We take the most powerful V8 Ferrari ever for a test drive, which is part thrilling and part terrifying. The 488 Pista is an absolute must for V8 lovers. 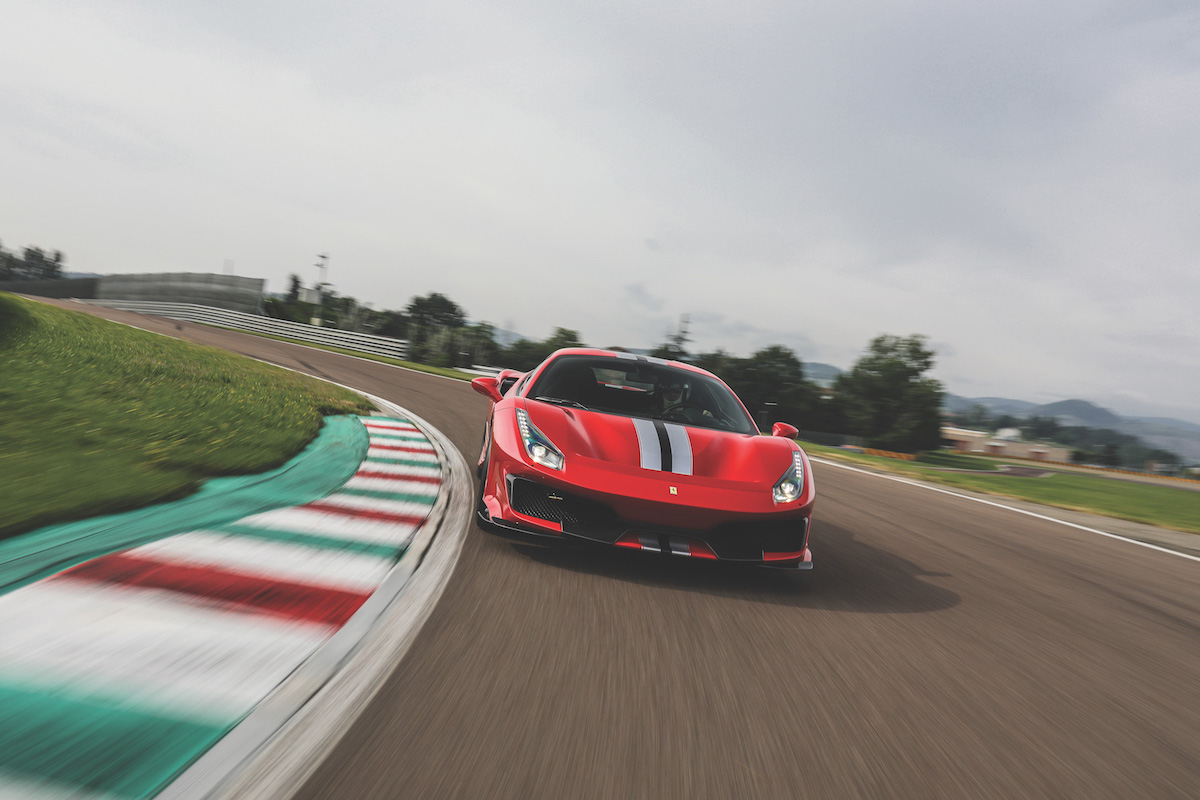 That our motoring future will be electrified is pretty much guaranteed at this point. The two-punch combination of soaring petrol prices and ever-stricter global emissions regulations ensures the roads of tomorrow will be jam-packed with vehicles that produce naught but the gentle chirping of a car from The Jetsons, and will tug at your emotions with all the conviction of a kitten gently batting yarn.

Ferrari owners, of course, care little about petrol prices, and the concept of overt regulation remains a hilariously foreign one in Italy. Because when you strap into the new 488 Pista (and you literally do strap in; overseas models are equipped with a race-ready four-point harness that secures you to the seat with
such enthusiasm they could be used as props in the next Fifty Shades of Grey movie), tomorrow suddenly seems an awfully long way away.

This car is to electric vehicles what a Texas barbecue joint is to vegans – a snapping, snarling, perennially loud and always angry supercar that doesn’t so much ignite the senses as set off a bomb in the part of your brain used to measure speed. It’s electrifying, sure, just in a different way.

This Pista is the fourth of the Ferrari Special Series vehicles (it follows the Challenge Stradale from 2003, the 430 Scuderia from 2007 and the 458 Speciale from 2013). And the fabled Italian brand has saved the very best for last.

Because the Pista – it’s Italian for ‘track’, not a pasta sauce – isn’t just another powerful Ferrari. It’s the most powerful V8 Ferrari of all time. And under that racing-striped bonnet (the stripe is an option, by the way, and one that will set you back a wallet-aching A$19,000) lurks a twin-turbocharged 3.9-litre powerhouse that produces a staggering 530kW and 770Nm.

That’s enough to propel you to 100km/h in just 2.8 seconds, which is so fast it genuinely hurts. In 7.6 seconds, you’ll have rocketed past 200km/h. And if you have steel in your nerves and lead in your foot, you can keep on climbing until you’re somewhere north of 340km/h. And then wander off in search of a stiff drink.

To put those numbers into sharper focus, that’s much faster than the 458 Speciale (3.0 seconds and 9.1 seconds). Or, as one Ferrari engineer told us, “The 458 was a monster. In five years, that we’ve been able to reduce the zero-to-200km/h time by so much really makes the point of what this Pista is.”

A flat-footed sprint isn’t just exciting, then, but a little bit terrifying too. And combined with a thunderous exhaust that swells like an orchestra mid-crescendo (Ferrari’s engineers say they shaped and tuned each pipe the way you might tune an instrument) as you pile on speed, the whole experience is wildly addictive.

This car is to electric vehicles what a Texas barbecue joint is to vegans – a snapping, snarling, perennially loud and always angry supercar that doesn’t so much ignite the senses as set off a bomb in the part of your brain used to measure speed.

That astonishing acceleration actually shrinks the gap between corners to something rapidly approaching too small, and you can find yourself sailing out the other side of a bend before you’ve even fully realised you’ve entered one, your mind genuinely struggling to process all that power. The steering is fabulous at any speed: pinpoint accurate and delivering its feedback constantly, helping you feel a part of the car rather than a passenger.

Yet, in the city, this fastest of V8 Ferraris is also surprisingly friendly. Some out-and-out performance cars feel like they’re forever straining on their leash at slow speeds, and driving one in traffic has you longing for the sweet relief of death. 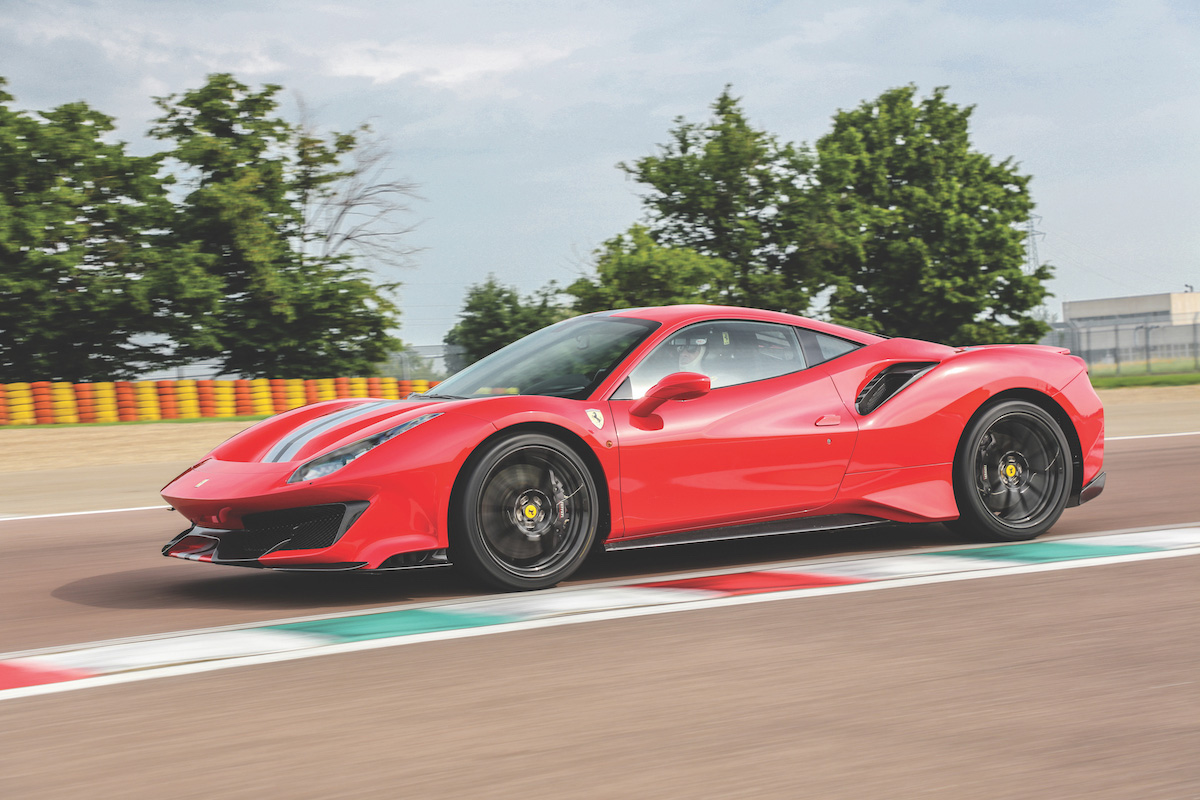 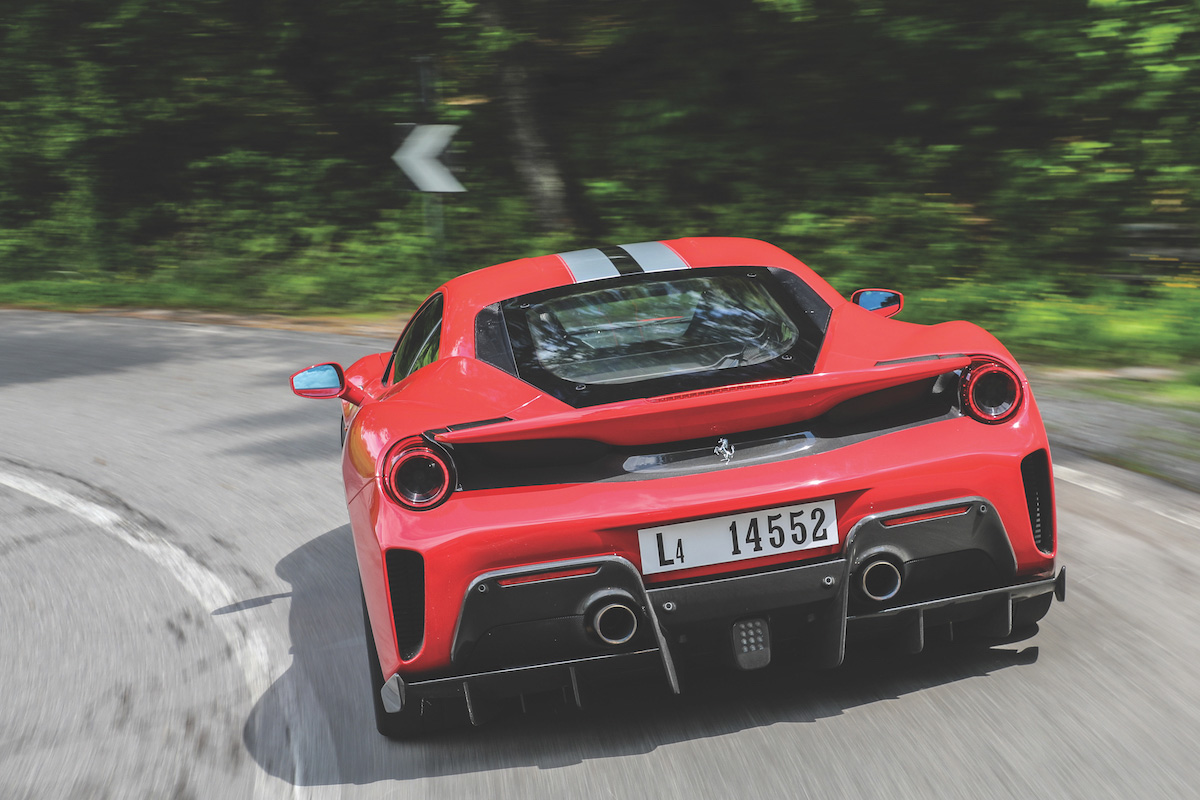 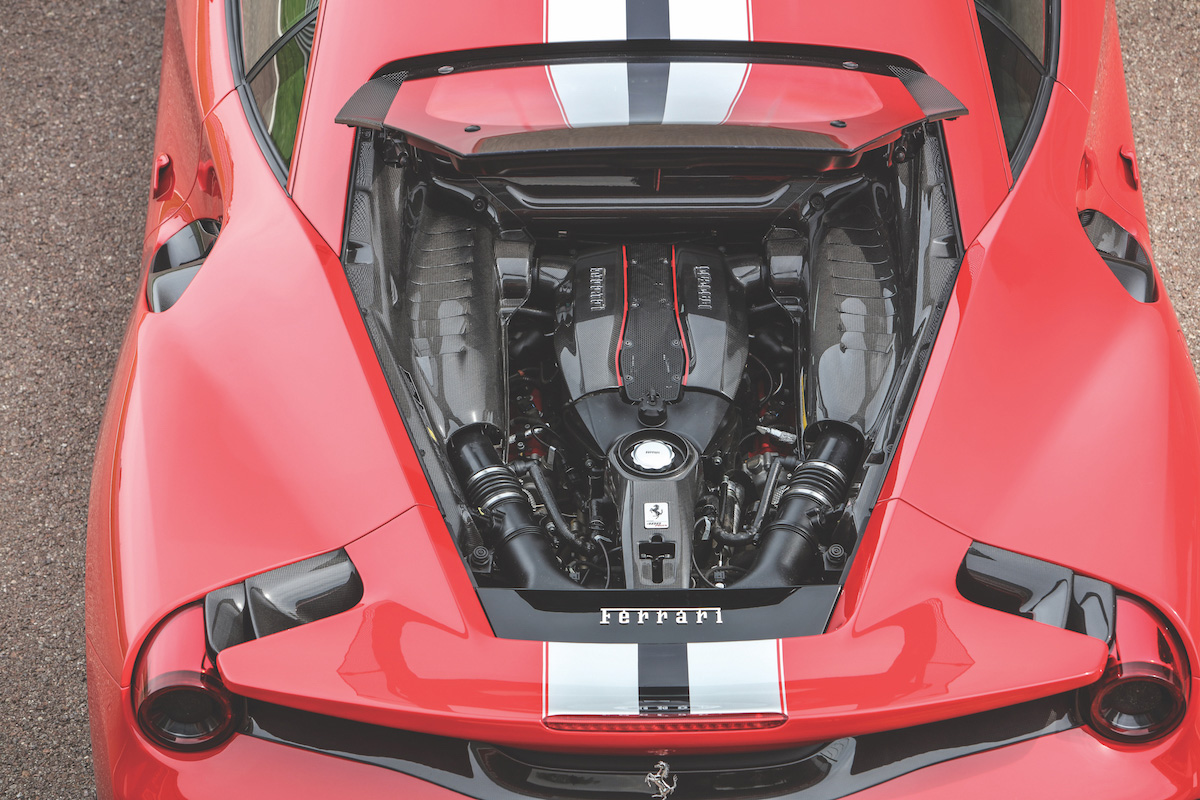 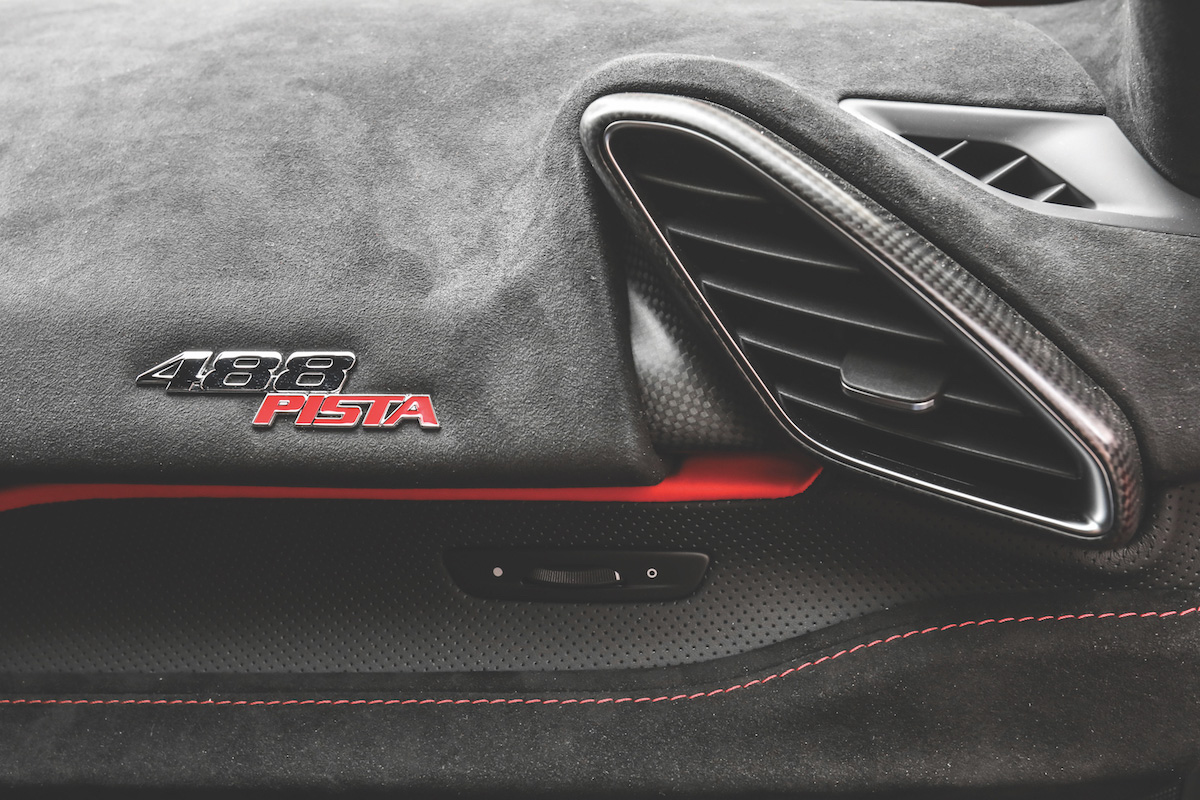 But not so the Pista. The ride, even combined with its wafer-thin seats, won’t have you speed-dialling the chiropractor, and the addition of Ferrari’s ‘bumpy road’ suspension setting makes navigating speed bumps or choppy roads a relatively painless experience.

More importantly, though, the Pista has been designed with nothing but fun in mind. And so it debuts some very clever technology that exists only to put a smile on its owner’s face.

Ferrari’s Side Slip Control function (which uses an array of sensors to gently stiffen the front suspension as you enter a corner, making it that little bit easier to launch a heroic drift), partners with a new progressive braking function that senses whether or not you’re trying to step the tail out, and then applies just the right amount of stopping power to maintain the slide, rather than pull you up completely.

Ferrari refers to the two systems as its Dynamic Enhancer, and they make a driving hero out of even the most ham-fisted pilot.

The Pista is an incredible 90 kilograms lighter than the 488 GTB on which it’s based, with Ferrari exploring every possible way to shave grams (there’s no glovebox, for example, and carbon fibre everywhere). But it’s the wind-tunnel aerodynamic work that is easily the most impressive. Consider that the Pista is a measly three per cent more powerful than the 458 Speciale, but serves up 22 per cent more downforce and has a 16 per cent better power-to-weight ratio.

The most obvious new aero addition is what Ferrari calls its S-Duct: a wide-mouthed opening in that sharp, plunging bonnet that sucks air up and over the windscreen (in the shape of an S), driving the front tyres into the tarmac to help produce extra grip.

It’s no coincidence that the Pista is Ferrari’s most virtually engineered model to date; all sorts of crazy combinations are plugged into Ferrari’s impressive VR rig, allowing the brand’s test drivers to cycle through an endless number of aerodynamic, suspension and steering setups before settling on something that could be built into a working prototype.

But if the A$596,888 Pista proves nothing else, it’s that in a brave new world of electrified motoring, there is still room for pulse-racing and petrol-pumping performance cars. Very loud ones. And few cars on the road today will get your heart thumping quite so hard as this ferociously fast Ferrari.