If a Porsche 911 crossed your path you’d be mad not to treat it well, but what are the new and noteworthy future classics? 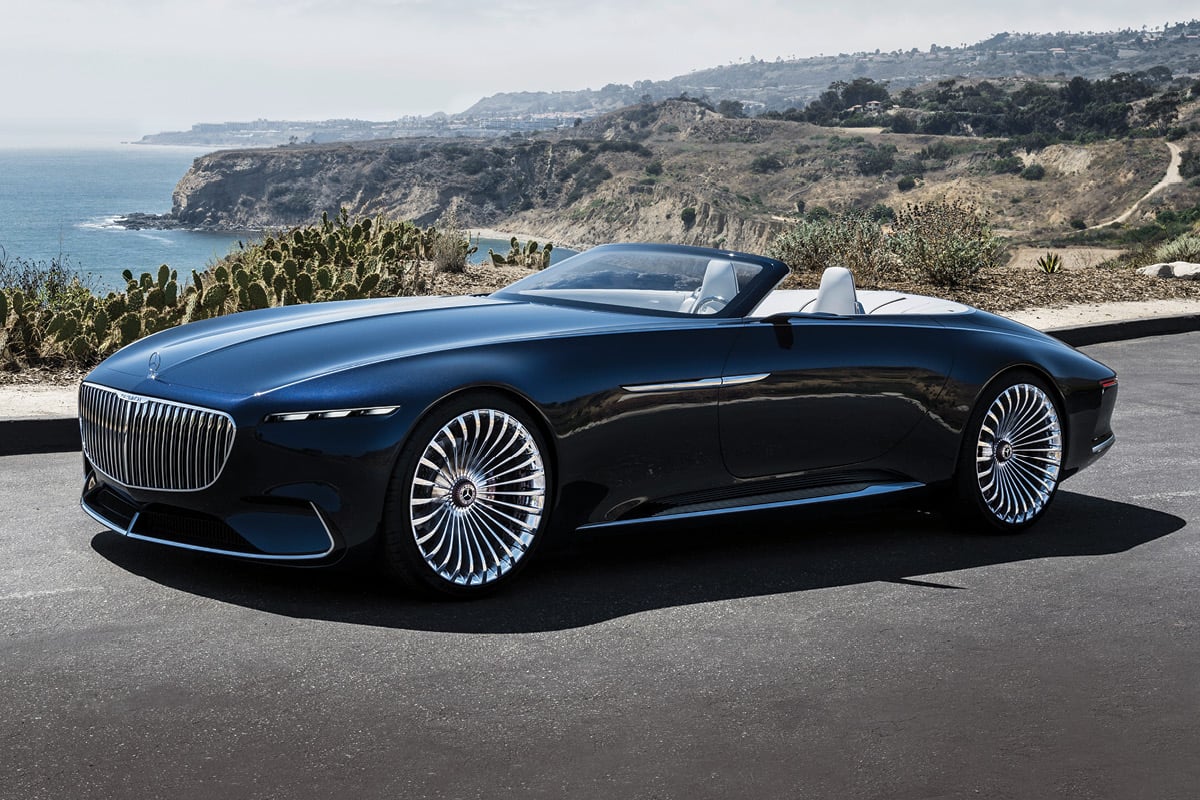 The idea that you can ‘invest’ in cars and get a financial, rather than deeply emotional, return on them does, initially, sound like the sort of line a dealermight give a client, or a husband to a wife. Or vice versa.

But it does happen. If you’d bought a Porsche 911 a decade ago, and looked after it, it would not only have brought you years of giggling joy by now, but it would also be worth more than what you paid for it.

Better yet, it will continue to appreciate if you garage it, because it’s seen as the last proper, classic Porsche ever made (for nerdy reasons like its non-electronic steering and non-turbocharged engines). There are cars you should be buying now as well, of course, and it could be argued that anything with a steering wheel will become a collectable classic soon enough.

The fact is, that if we’re nearing the eventual end of the car as we know it – and moving towards a future where we’re transported by cars rather than excited about them – then the vehicles released in the next few years will be, engineering wise, the best cars we’ll ever see. (It’s the same with the Holden Commodore; the last Australian-built versions, now coming to their end, are by far the best of their breed by a distance, and are arguably also collectable.)

What you want to aim for is a vehicle that will delight your eyes and fizz your soul, and still be worth plenty after you’ve had your way with it.

So you need to choose a classic; not some fusty old car with mechanical issues, but a modern classic, one that’s new now but will pass the test of time. Any Porsche 911 is probably a good choice, of course, but here is our selection of the new and noteworthy.

When it comes to truly modern classics it seems appropriate to include one that’s so modern it’s not quite here yet but, when it arrives, the Vision 6 Cabriolet will surely be in high demand. 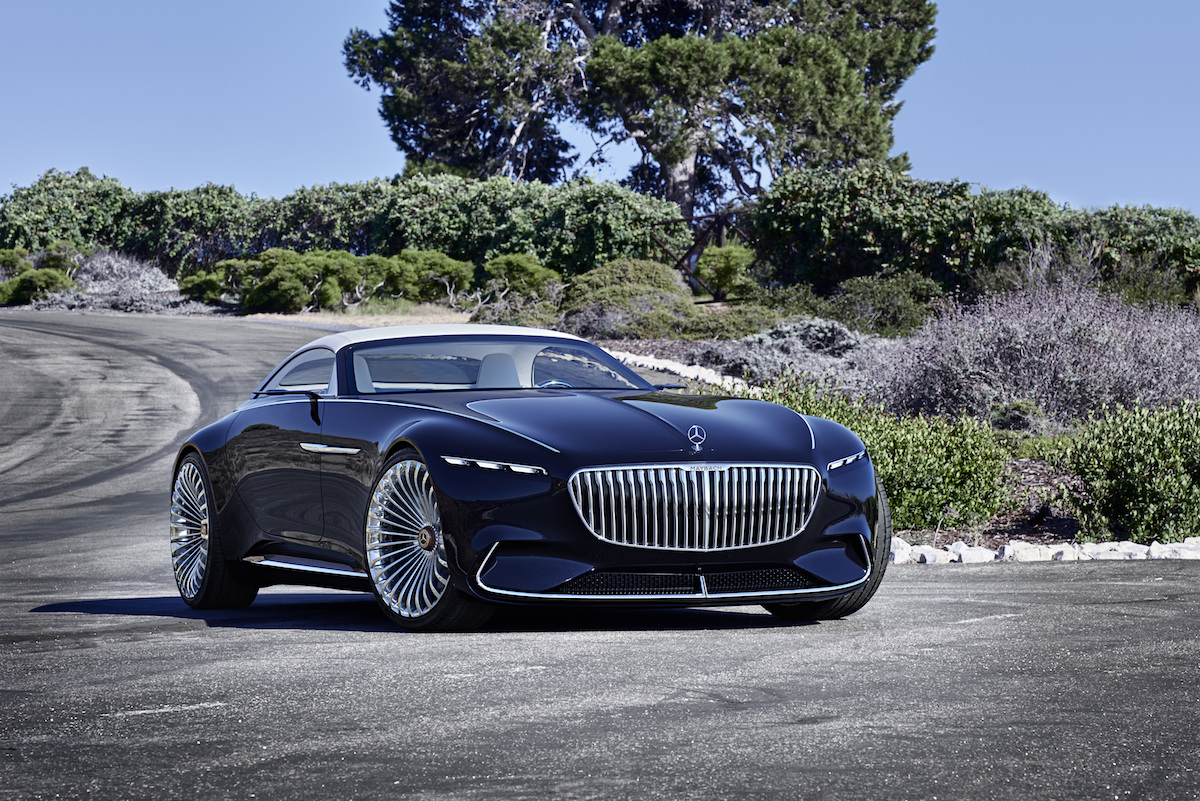 Every now and then a car company promises a vision of the future that we can all hope comes true – Audi delivered on that promise with the original TT, as did Tesla with the Model S.

Now we have this stunning glimpse of what an ideal future car might look like, a car that looks as shapely, sharp and desirable as a Riva powerboat on Lake Como. There’s plenty of boat about the Maybach (Mercedes’ rival for Rolls-Royce), with a rear deck and a two-person cabin featuring crystal-quilted Nappa leather seats shaped like those you’d find on a luxury cruiser.

There’ll be nothing boat-like about its performance, though, with the traditional, dirty oil-drinking engine replaced by a green-and-mean electric motor, powered by batteries under the floor and making 550kW.

The Vision, when it becomes a real car rather than the motor-show pony concept it is now, will be able to zap almost silently from zero to 100km/h in 5.5 seconds and will have a claimed electric range of 500km between charges. Instead of a big lump of engine under that enormous bonnet you’ll find a “customisable storage area”, with personalised luggage, naturally.

If you were young, childless and carefree – and not bothered about having a car with a rear seat that’s not much good for anything other than jacket storage – we’d suggest you invest in BMW’s magnificent M2 coupe. 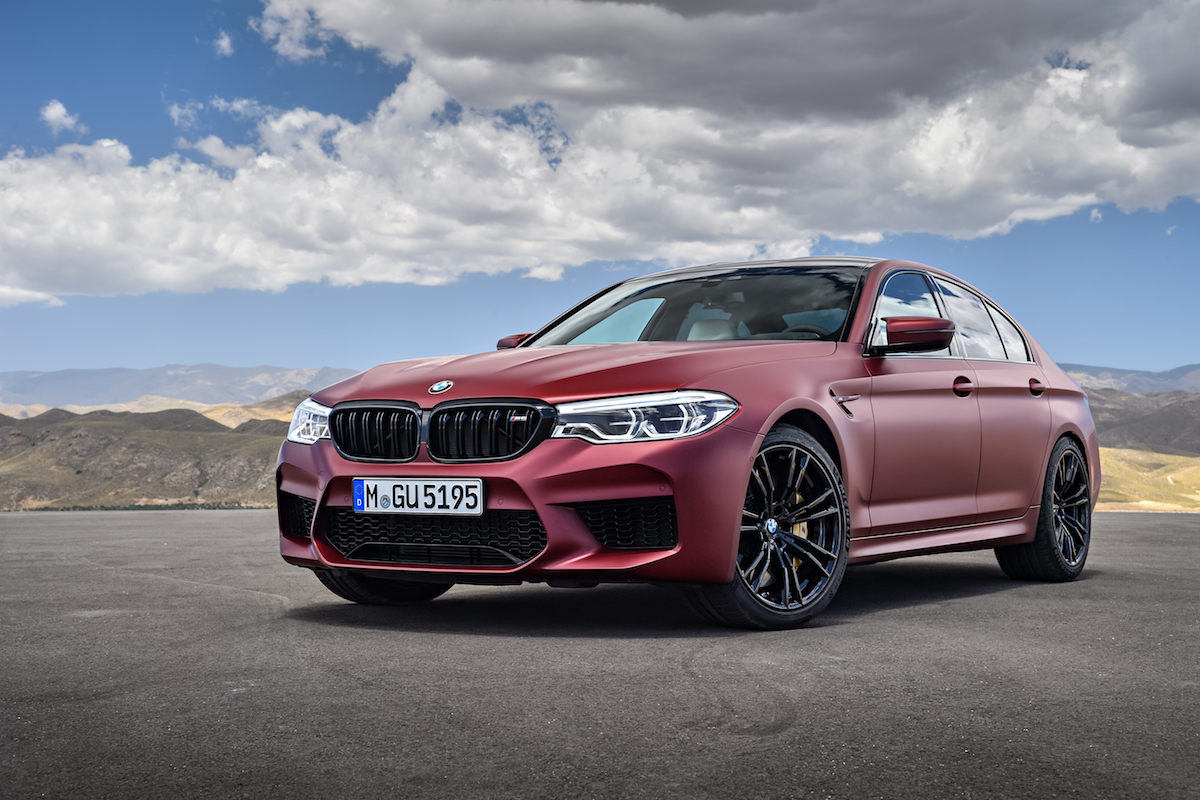 It’s not just a return to form for BMW’s motorsport-born M badge of goodness; it’s a genuine collector’s item, and an absolute howling hoot to drive. But it is tiny.

Fortunately, BMW has now unveiled a proper sporting car for grown-ups, and one that follows in the storied footsteps of past classics: the M5.
This car – unveiled recently at the Frankfurt Motor Show – is something completely new for the M division, because it’s the first proper M car (so not an SUV) to have all-wheel drive.

Rear-driven, tail-wagging performance cars have long been BMW’s unique selling point, but such is the power this new M5 makes that the engineers have finally admitted it’s too much for just two tyres to deal with. This, then, is no ordinary 5 Series; it is, in fact, an extraordinary new M5. Sadly there’s no word yet on how much it will cost you to invest in one.

You would be forgiven for thinking that every car Ferrari unveils is an instant classic, such is the esteem in which the world’s most recognisable car brand is held, but it’s not the case.

Everyone has bad days, even the Italians, and when the company made the decision to head slightly down-market by targeting Americans with its entry-level California convertible, the results were not pretty. 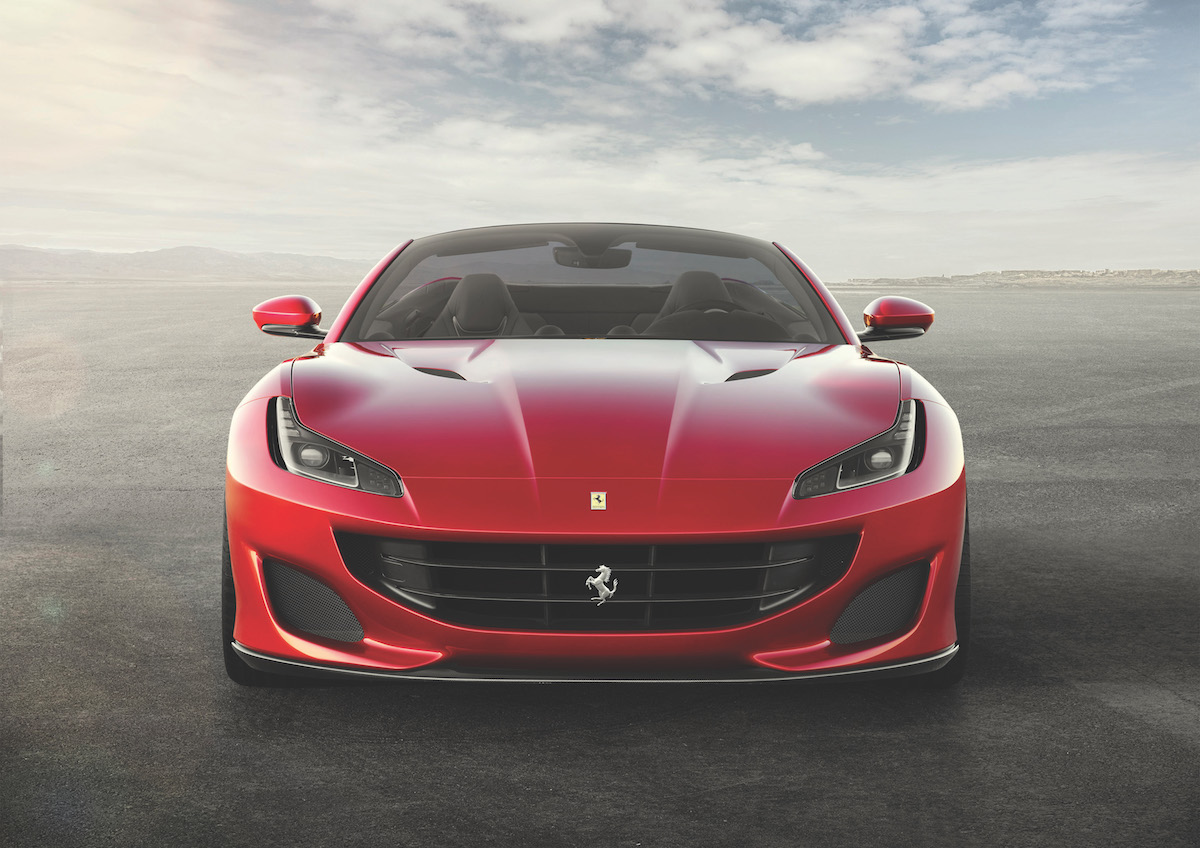 Picture a supercar designer being forced to produce a camel, or a yak, and you’ll have some idea what the resulting Ferrari California looked like – lumpen, heavy-butted, slightly doleful.

Fortunately, Ferrari has now chosen to reinvent its four-seat drop-top with the truly beautiful Portofino. Despite using the same 3.9-litre turbocharged V8 found in the outgoing California T, performance has been improved by clever fettling and it now produces 441kW (up 29kW) and 760Nm.

A Portofino, with a price tag expected to be around the A$400,000 mark, is the kind of Ferrari you can get your hands on though, if you get your order in quickly. And, unlike, the California it replaces, it’s got classic written all over it.

Compared with the Project One, the new Rolls-Royce Phantom seems like a bit of a bargain, at an estimated A$1.4 million, and it will certainly be just as much a work of art to grace your garage.

A new Phantom is a rare thing indeed, as Rolls hasn’t rolled one out since 2003, and there’s a reasonable chance the next one will come with a fully autonomous chauffeur, making this the last in an honourable line. 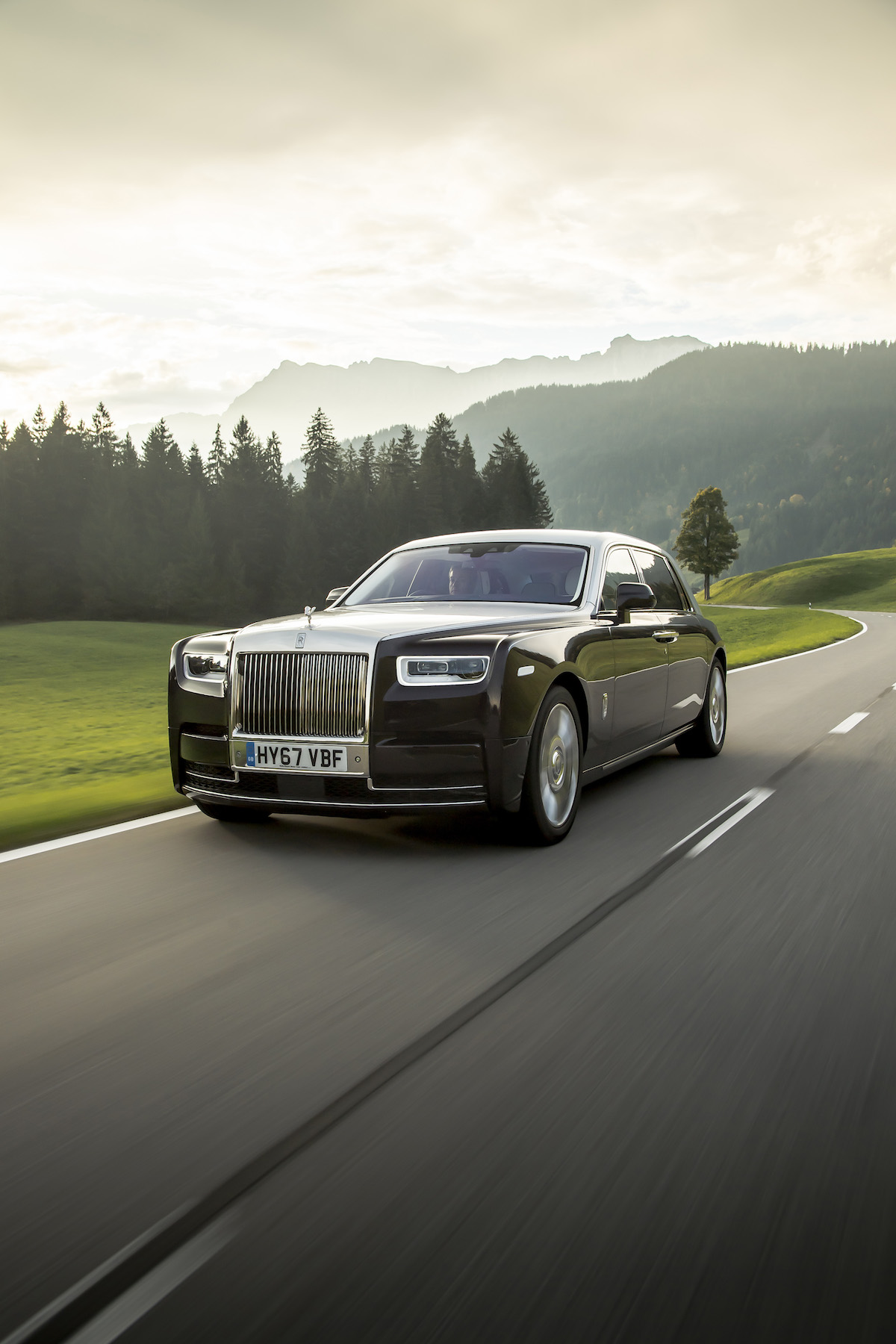 The new Rolls-Royce Phantom seems like a bit of a bargain, at an estimated A$1.4 million.

It is all about art, too, with the new Phantom featuring a Gallery, which is a huge strip of glass that spans the length of the dash and which you can use to display precious things (the demo vehicle has a collection of butterflies), to make you smile when you’re driving. Or, more likely, being driven.
The back seats are the place to be, with not one but two drinks cabinets, one offering a glass decanter and two whisky glasses and the other a chilled section, with two champagne flutes.

Power comes from the world’s quietest V12 engine, making 420kW and 900Nm. It takes a lot of power, of course, to shove 2.6 tonnes of luxury to 100km/h in a mere 3.5 seconds.
What’s hard to imagine is that you’d ever be in a massive hurry to get out of your Phantom. It’s too fabulous in there.

At the very highest end of your investment portfolio should be the Project One, which looks likely to go down in history as the fastest car ever made, before all humans are banned from driving for being less safe than computers.

That boast alone will make it a collector’s item, as will its A$5 million price tag (some A$1.8 million of which will go to the government in taxes) and the fact that it will launch humans from zero to 200km/h in less than six seconds. 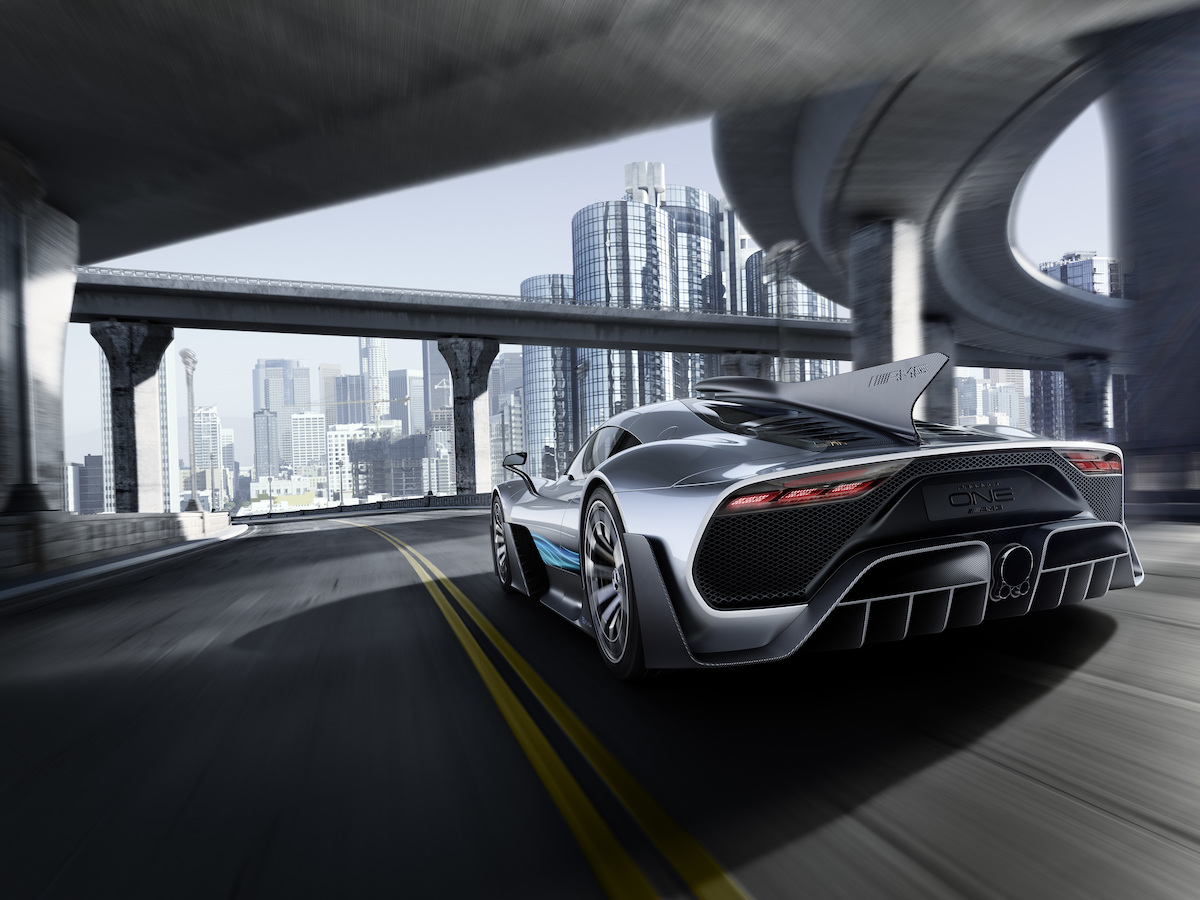 This is not a supercar, it’s a hypercar, and competition to get your hands on one will be fierce.

If that sounds Formula One® fast, it is, and the car will use a powerplant borrowed from Lewis Hamilton’s race car. It’s a highly strung 1.6-litre V6 that combines with savage electric motors to make more than 1,000 horsepower (or more than 740kW).

Driving one will probably cause damage to your internal organs, and eyeballs, but it will be made slightly easier by an electrically powered front axle that provides clever all-wheel-drive grip.

This is not a supercar, it’s a hypercar, and competition to get your hands on one will be fierce. Just eight examples have been earmarked for Australia thus far, and Mercedes-Benz has taken A$500,000 deposits on each of them, so you’ll need to buy someone else’s place in the queue. But it will be worth it.

Autonomous vehicles: The end of driving as we know it

So, how far are we from cars that drive themselves, and thus all the cars currently on our roads becoming quaint relics for future generations?

At last year’s Paris Motor Show, Audi board member Dr Dietmar Voggenreiter announced that the next Audi A8, set to be launched later this year, would allow drivers to “read a book, check their emails or do their Snapchats” while at the wheel.

You would be able to drive “hands off and eyes off”, and if your car injures anyone, or their dog, Audi says it will pick up the legal bills. That’s confidence.

Self-driving is only the beginning, though, because Voggenreiter believes it will quickly lead to car-sharing systems, where a vehicle is delivered to you only when you require it.

Jaguar is also working towards that future, recently launching a steering wheel/personal assistant called Sayer that would check your calendar and book a car in time for your next appointment. When the car arrives to pick you up, you can use Sayer like a conventional steering wheel and drive if you choose to. But you probably won’t.

If this sounds like a future in which you won’t need to own a car, you’re right, which is why Voggenreiter says Audi’s forward planning for 2025 doesn’t even contain any volume forecasts.

“Volume is not the goal, the car market, the mobility market, will be more segmented, particularly in big cities where parking and the fixed costs of owning a car will be very expensive, so sharing a car becomes more interesting,” he explains.