Style, elegance, power and craftsmanship have been elevated to new heights as Britain’s most prestigious car manufacturer produces its latest flagship, the luxurious and unrivalled Bentley Mulsanne. 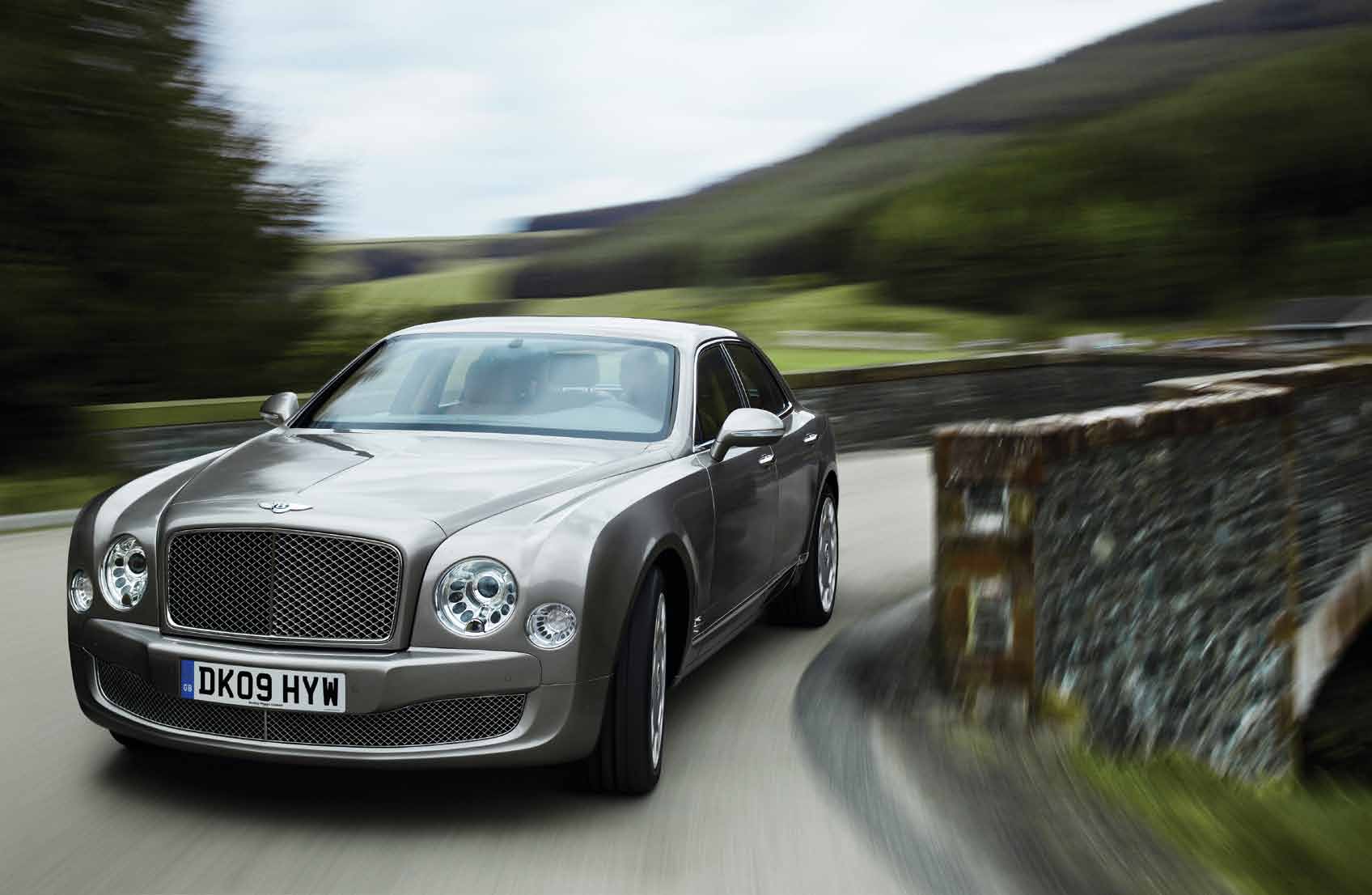 Some of the most beautiful and rewarding processes in this world take time. Marcel Proust’s epic saga Remembrance of Things Past took 18 years to publish in its entirety. Another, the Bentley Mulsanne, takes nine weeks to hand-build from start to finish. The process is immensely meticulous and has to meet Bentley’s rigorous specifications that have been crafted and perfected over six decades of excellence.

With this in mind, best believe that you will be greatly rewarded for your patience as Bentley’s latest flagship is taking to the streets in style and elegance. Bentley’s Regional Coordinator for South-East Asia and Australasia Ian Churchill explains the art of manufacturing a Bentley Mulsanne: “The interior of a Bentley represents unparalleled coach- building skill, and in fact half of the car’s production time involves crafting this environment.

A Mulsanne veneer set, for example, takes five weeks to create, turning a rough root ball into a full set of mirror-matched, fine-polished leaves. And stitching the leather on a steering wheel takes two days. Unique to Bentley Motors is the use of superforming, which involves heating sheets of aluminium to very high temperatures and using high-pressure air to shape it without the need for seams or welding. This creates highly pronounced styling lines and unbroken surfaces, bringing the feel of a truly coach-built car.”

Bentley’s Head of Interior Design Robin Page exclaims: “Over 170 hours – almost half the entire build process – goes into crafting the interior of the new Mulsanne. At Crewe, Bentley’s way of working is the opposite of mass production – we start where others stop.” The use of wood and leather hides has increased significantly to create an even more refined and luxurious cabin. 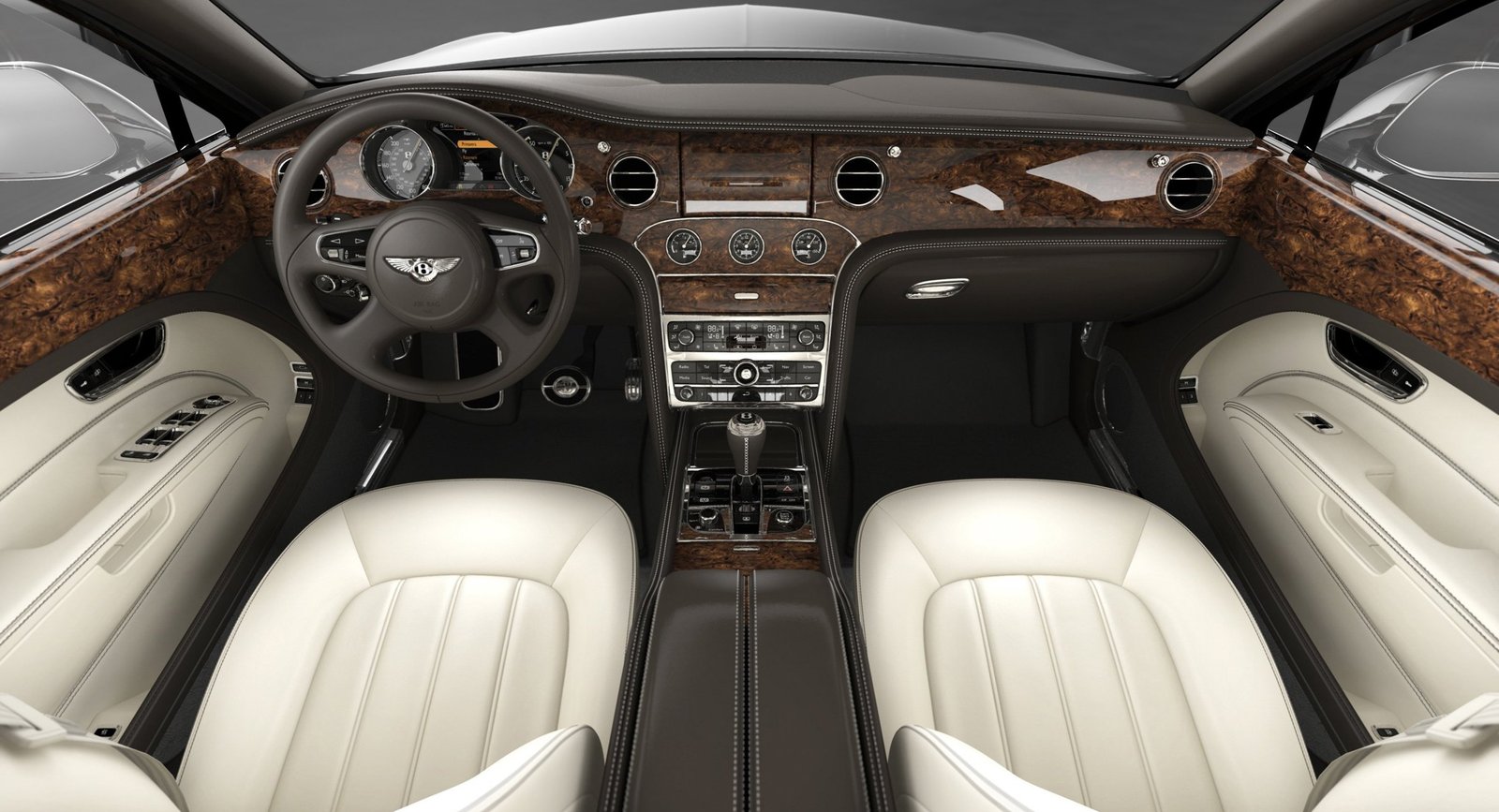 While classic design features such as bulls-eye air vents (now also fitted in the rear compartment), high-quality, mirror-matched wood veneers, leather hides and hand-finished stainless steel are retained, they are mixed with new touches such as beautiful ‘glass’ switches. The entire cabin is encased within a ‘ring of wood’ waistrail with an unbroken panel of wood gracing the Mulsanne’s dashboard. Inverted dial needles within the instrument cluster are reminiscent of early Bentleys, while the entire dashboard and console design is a subtle reminder of the Bentley wings motif.

Customers may select from an extensive range of premium-quality veneers, unbleached for a natural appearance, and two marquetry options: picture frame and contemporary crossbanding. True to the Bentley ethos, customers may also select from a virtually unlimited palette of leather hides, including 24 ‘standard’ colours, of which three are new for Bentley.

This unrivalled choice of veneers, leather hides and paint colours ensures that the needs of all customers can be matched perfectly. Following detailed customer feedback, a traditional tanning process has been reinstated to match the rich, wornleather smell that is so evocative of vintage Bentleys. Only a very few hide suppliers worldwide have the capability to do this.

The Mulsanne’s interior bears some remarkable features, particularly the durability of the hides, which are tested over 20,000 times by a team of people of varying height and weight (rather than the robots used by other manufacturers) to provide the most authentic, real-world assessment possible. “Much of our work takes place behind the scenes,” explains John Minshull, Head of the Bentley Laboratory at Crewe.

“However, this development and scientific testing work is a key part of the Mulsanne story as it provides our craftsmen and women with the best-quality materials. And it is the combination of their creativity and our research which makes the Mulsanne interior so special.”

“The Mulsanne represents the pinnacle of the Bentley product range,” Ian proclaims, “appealing to customers who value exclusivity, handcrafted excellence, and a truly bespoke vehicle. Although the Arnage previously held this position in our product portfolio, the Mulsanne is a completely new model that features a wholly re-engineered 6.75-litre engine showcasing the latest in technological advancements through cam phasing and variable valve displacement whilst retaining the low-revving, high-torque characteristics of all big Bentleys.

Unlike many vehicles produced these days, the Mulsanne is built on its own unique platform, which has given our engineers the ability to create a car without compromise. Inside the Mulsanne, traditional coachbuilding skills – for which all Bentley craftsmen are known – have been retained, now fused with technological enhancements such as a 60-GB multimedia system drive, sat nav, audio–video, personal data, telephone and Bluetooth connectivity, keyless entry, and a Naim audio system featuring the
world’s most powerful in-car amplifier – 2200 watts.”

The look and feel of the Mulsanne’s lavish interior are matched only by the sheer power and marvel of the car’s re-engineered engine and chassis. Delivering peak performance and precision, Bentley’s powertrain engineers have crafted an exquisite culmination of effortless torque, ultra-refinement, and improved engine efficiency.

Dr Ulrich Eichhorn, Bentley Motors’ Director of Engineering, explains the reasons behind the Mulsanne’s V8: “Using our V8 guarantees the immense power at low revs and unstressed performance that are the hallmarks of a flagship Bentley. But we also set our engineers the challenge of maintaining high levels of refinement at any speed and, equally important, improving efficiency.” 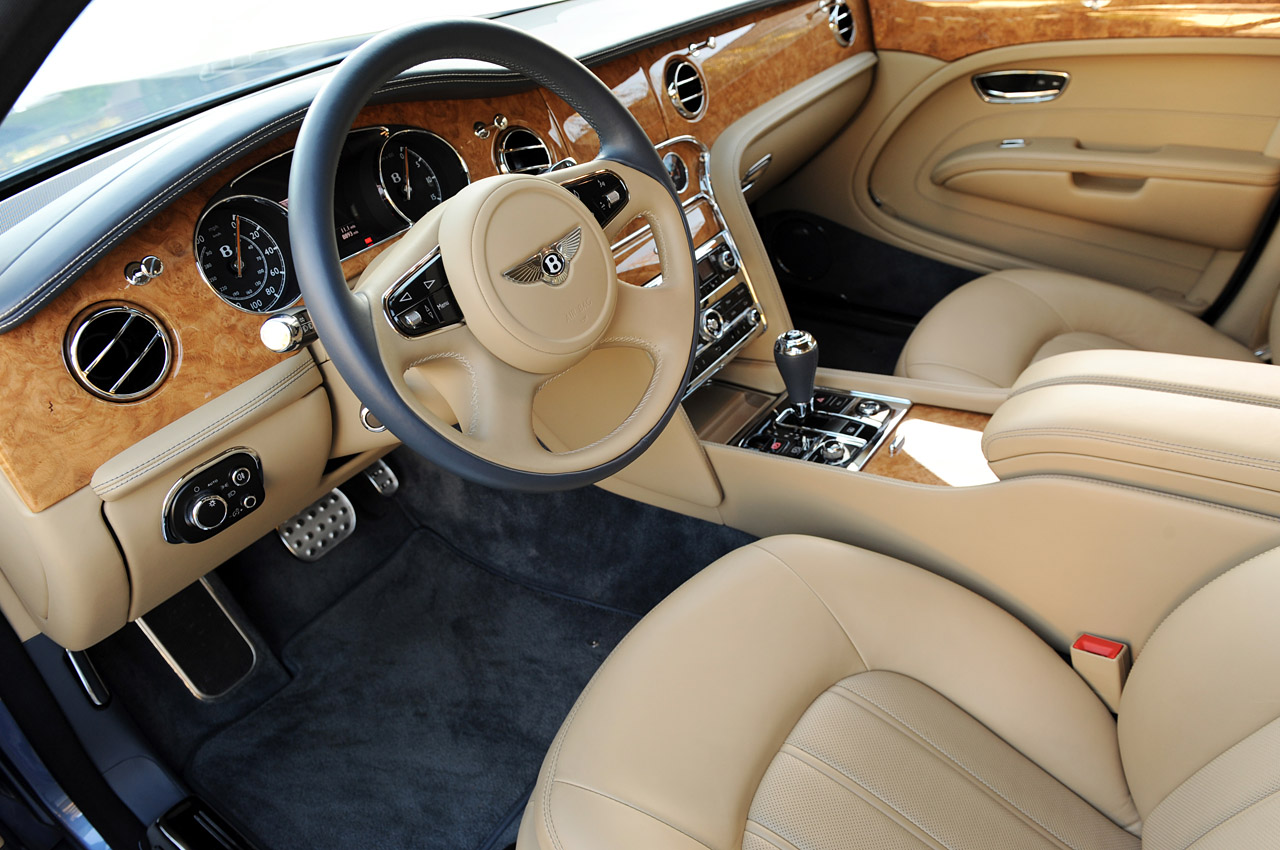 To achieve a significant reduction in fuel consumption and carbon dioxide emissions, the Mulsanne V8 sees the introduction of two new control systems: cam phasing and, a first for the ultra-luxury sector, variable displacement. The pioneering use of these two technologies in combination allows the Mulsanne’s engine management system not only to adjust the V8’s breathing for improved engine idle quality and torque delivery, but also to close the valves of four of the eight cylinders for maximum fuel economy when cruising.

In the new Mulsanne, the 6¾-litre V8 develops 512 PS (505 bhp/377 kW), while the massive torque (1020 Nm/752 lb ft) is now delivered even earlier at 1750 rev/min. This dramatic improvement in torque delivery from just above idle and right across the rev range ensures that, with a mere tap of the accelerator, the driver is immediately rewarded with that characteristic deep, muffled V8 burble and phenomenal acceleration.

Bentley has crafted an exemplary testament to luxury motoring while remaining conscious of the environment and carbon emissions. “In line with our environmental strategy communicated at the Geneva Motor Show in 2008,” Ian highlights, “from 12 MY all continental Bentleys are capable of running on renewable fuels.

This has the potential to reduce well-to-wheel carbon dioxide emissions to 120 g/km. The Mulsanne will ultimately be capable of running on either gasoline or E85 biofuel. Of note is the fact that the Mulsanne’s re-engineered V8 and new eight-speed transmission currently deliver an improvement of over 15 per cent in fuel consumption and carbon dioxide tailpipe emissions, achieving a figure of 393 g/km – European cycle – when compared with the Arnage.”

The original Mulsanne was produced in 1980 and was developed until 1992. The name derives from the 24 Hours of Le Mans endurance race where Bentley has a rich history, including five victories between 1924 and 1930. The Mulsanne Straight is the stretch of the Le Mans racecourse where the cars reach their highest speeds. The new design has adopted elements from original models created by the company’s founder, WO Bentley. Ian states, “The design team set out to create a sculpted form that blended classic Bentley heritage cues with modern lines.

Echoing the S -Type Bentley of the 1950s, the Mulsanne’s bold frontal design is dominated by the traditional Bentley matrix grille and highly prominent, classic round inner headlamps with chrome surrounds. These are flanked by two, smaller outboard lamp clusters, all featuring the latest in lighting technology.”

While the all-new Bentley Mulsanne pays respect to the manufacturer’s past triumphs, it is a thoroughly modern luxury car that offers the world’s most exclusive driving experience – a unique fusion of power, refinement and elegance. Bentley Motors’ Chairman and Chief Executive Dr Franz-Josef Paefgen summarises: “No other carmaker can offer such a blend of performance and refinement in a single vehicle. The new Mulsanne is a car that evokes the Bentley philosophy of building the best luxury grand tourers in the world.”