While the bugs haven’t been completely ironed out of fully autonomous cars, the latest sedan from Mercedes-Benz shows that we’re not far away from a brand-new world of driving. So, how long have you worked for Mercedes-Benz?” I asked the young lady as she drove me from one dealership to another. She had just returned to the workforce, having been a stay-at-home mum for a few years.

“About a week,” she replied.

A week may have been enough time for a brief introduction to some of the Benz fleet, but for someone unfamiliar with the latest E-Class, this was a perfect opportunity to demonstrate something quite unexpected. We had been driving for about 5 minutes when I reached over and flicked the lever behind the steering wheel. The grey steering wheel icon at the bottom of the screen suddenly turned green.

“Take your hands off the wheel,” I said. She shot me an incredulous look. “And your feet off the pedals. Don’t touch anything.”

“Seriously?” Her worried tone came across loud and clear. 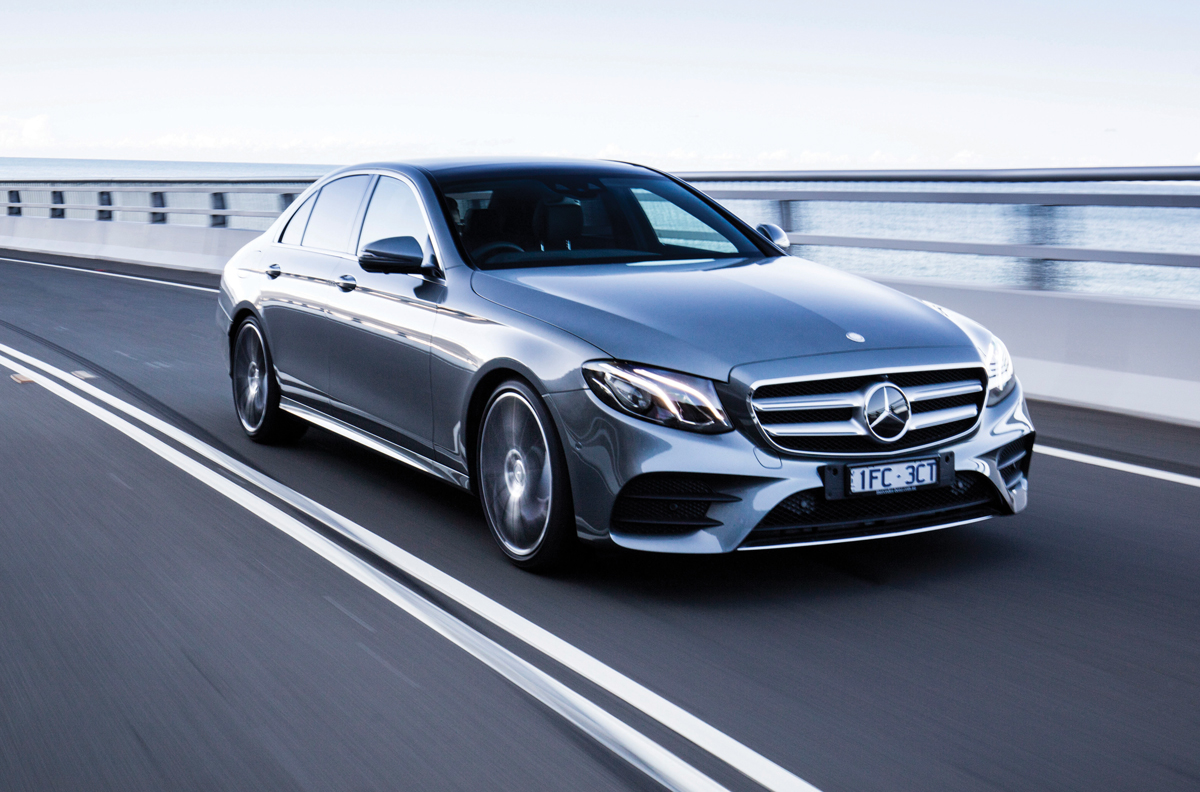 She did as instructed, but with deep reluctance. As she slowly lifted her hands away from the wheel, the words came out involuntarily. “Oh my God, oh my God,” she muttered, about 10 times in quick succession. With no contact with the car’s controls, it dawned on her — the car was driving itself.

The steering wheel was moving, keeping the vehicle perfectly in the centre of the lane. The radar-based cruise control monitored the car in front, maintaining a set distance. All the safety systems on the car were on high alert, with cameras tracking traffic in each direction as well as the lane markings and kerbs. This, folks, is the closest we can get to autonomous driving in this country. It’s not foolproof, of course. When the lane marking runs out, the steering wheel icon goes from green back to grey, alerting the driver to the fact that it can’t ‘see’ anything to judge how straight it’s tracking. And on super-tight bends, the system can’t react quick enough to keep the car turned in sharply enough. So, yes, there’s some way to go before a proper self-driving production car hits our roads. At the moment, it’s a very cool party trick. But that’s just one aspect of the new E-Class.

Stylistically, it’s cut from the same conservative cloth as the S- and C-Classes, creating a range that is the automotive equivalent of a Matryoshka doll, yet its lines make it a well-balanced and handsome machine. Inside, however, the 2 large screens that cover both instrumentation and infotainment speak volumes for who the E-Class is aimed at. It’s a technological tour de force, with just about every known bell and whistle (and a few others) thrown at it. The oft-used line is that today’s smartphones have more processing power than was needed to send man to the moon. By that logic, the E-Class is a rolling NASA command centre, capable of putting the Mars missions to shame.

The steering wheel has left and right touch-capacitive pads that you can swipe to change preferences and push to confirm, controlling either the infotainment or instrument screen respectively. There’s a rotary controller, and hovering above it another touch pad through which you can write letters or numbers with your finger, narrowing down contact lists, for example. Or you can swipe through radio stations or zoom in on the sat-nav map. The voice commands enable true hands-free driving, while cameras all around allow for easy parking, or you can ask it to park itself. 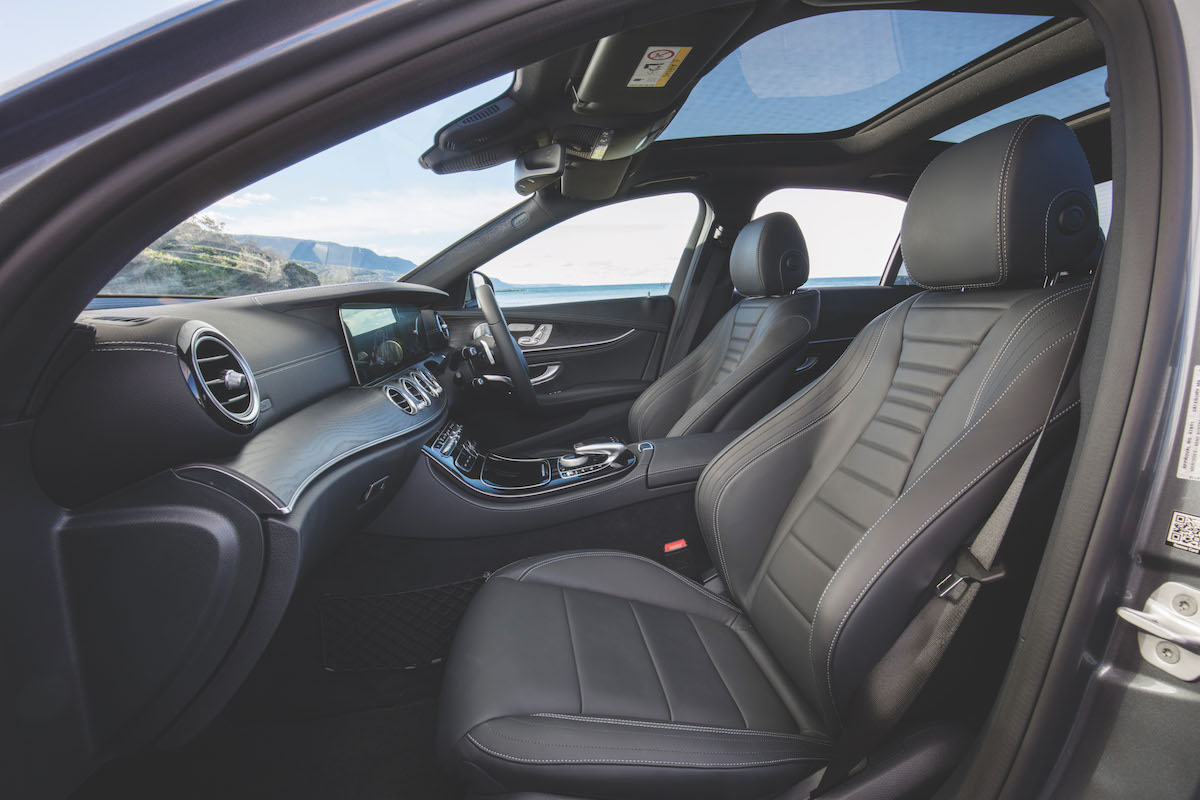 Merc’s new system uses the seats to further protect its occupants. Sensors in the doors detect a crash and in milliseconds the bolsters inflate to push the passenger toward the centre of the car, putting more distance between them and the inevitable impact.

Then there’s the safety suite. Of course, there are airbags galore, seatbelt pre-tensioners, and the usual barrage of acronyms like ABS, EBD, ESP, ASR, and the list goes on. But perhaps the most interesting is the side-impulse system. In the event of a side impact, normally the car relies on side intrusion beams to absorb the initial impact and then the side airbag inflates to cushion the passenger. But Merc’s new system uses the seats to further protect its occupants. Sensors in the doors detect a crash and in milliseconds the bolsters inflate to push the passenger toward the centre of the car, putting more distance between them and the inevitable impact. 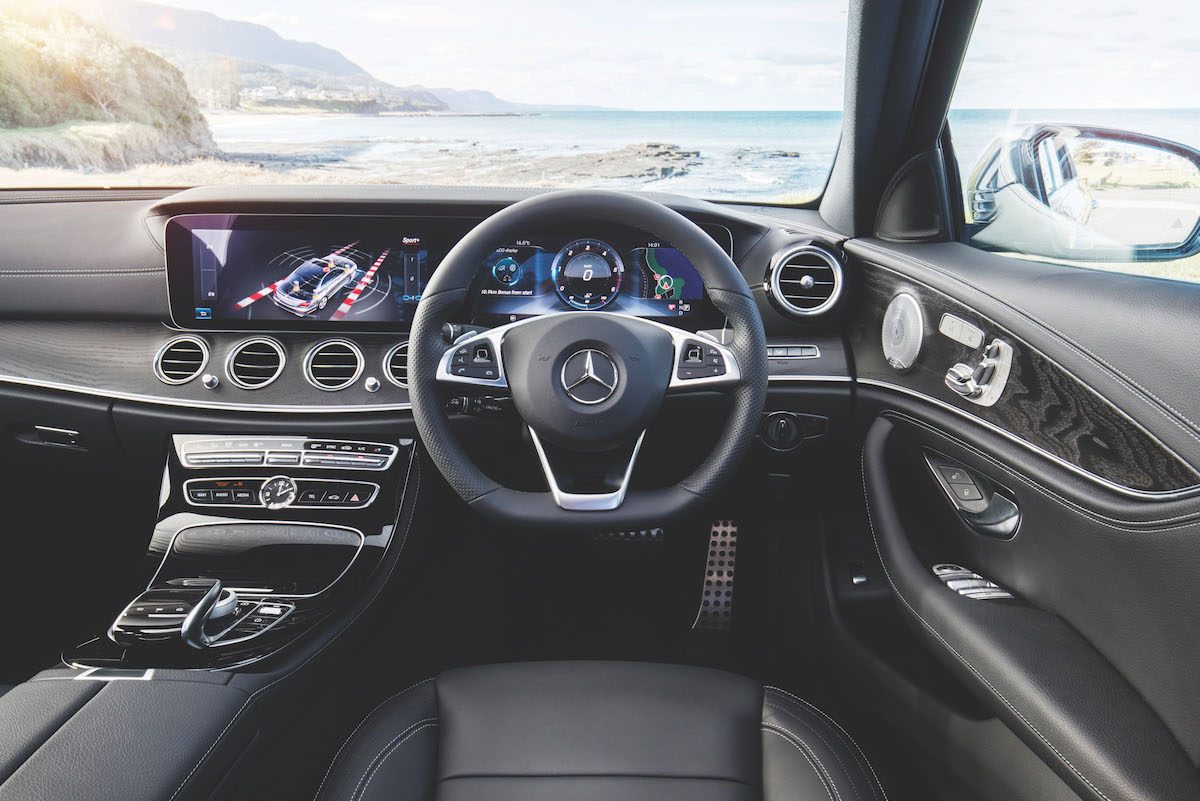 The steering wheel has left and right touch-capacitive pads that you can swipe to change preferences and push to confirm, controlling either the infotainment or instrument screen respectively.

So it’s loaded with gadgets, but the more layers of technology you put between the car and the driver means that we’re getting more and more isolated from our driving. Or so you may think. In fact, the electric steering has been weighted so that it doesn’t feel artificial, while the paddle shifters allow you to take manual control of the 9-speed auto. Being rear-wheel-drive, it can be hustled along at a cracking pace, and even when optioned with 20-inch wheels it never feels harsh over rubbish inner-city roads.

It is the machine that shows us the transition from driver-oriented to self-driving vehicles, allowing us to experience the future without trepidation.

Inside, it’s a return to form. With far less clutter than the previous model, the new E-Class is simple without being austere. Judicious use of open-grain wood veneers gives a warmth and high-end feel, while true metal accents punctuate the cabin. The leather is, as you’d expect, soft and pliable, and the seats, with their clever door-mounted controls, are fabulous over long distances. Ambient lighting with unlimited colour choices also bathes the cabin in a cool glow that can be separated into front and rear zones. As a 5-seat mode of transport, it’s hard to beat.

The E-Class heralds a turning point of the car industry. It is the machine that shows us the transition from driver-oriented to self-driving vehicles, allowing us to experience the future without trepidation. With a foot in both camps, it will appeal both to those who enjoy their driving yet want a little luxury, and to those who love progress and innovation.

Yes, the times are changing. They won’t build ’em like they used to.