The interior of the new F-Pace has been totally revamped for more refinement and luxury. 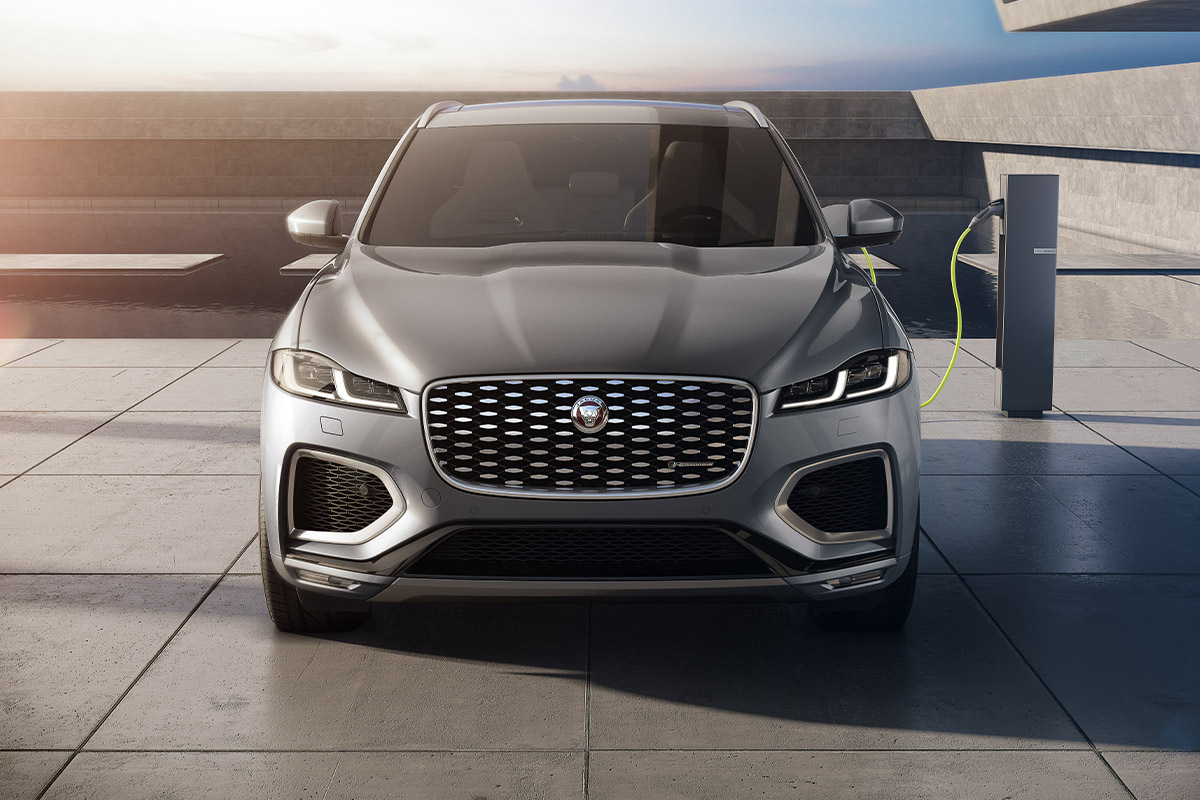 The Jaguar F-Pace SUV won the prestigious World Car of Year and World Car Design of the Year title in 2017. Its latest generation sees a new interior that matches its bold exterior design. It also introduces Jaguar’s first plug-in hybrid vehicle which is not available in the US.

“With an assertive new exterior, beautifully crafted all-new interior, latest generation Pivi Pro infotainment and the choice of in-line four- and six-cylinder engines including PHEV and MHEV technology, the new Jaguar F-PACE is more luxurious, connected and efficient. The four-cylinder, 404PS PHEV has an all-electric range of up to 33 miles (53km),” Jaguar said in a release.

There are a number of new F-Pace models to choose from. It is available with the P400e PHEV powertrain and the latest four-cylinder and new in-line six-cylinder petrol and diesel Ingenium engines. Mild Hybrid Electric Vehicle (MHEV) technology is also available on selected engines for the first time. All F-PACE models feature intelligent all-wheel drive and eight-speed automatic transmissions. 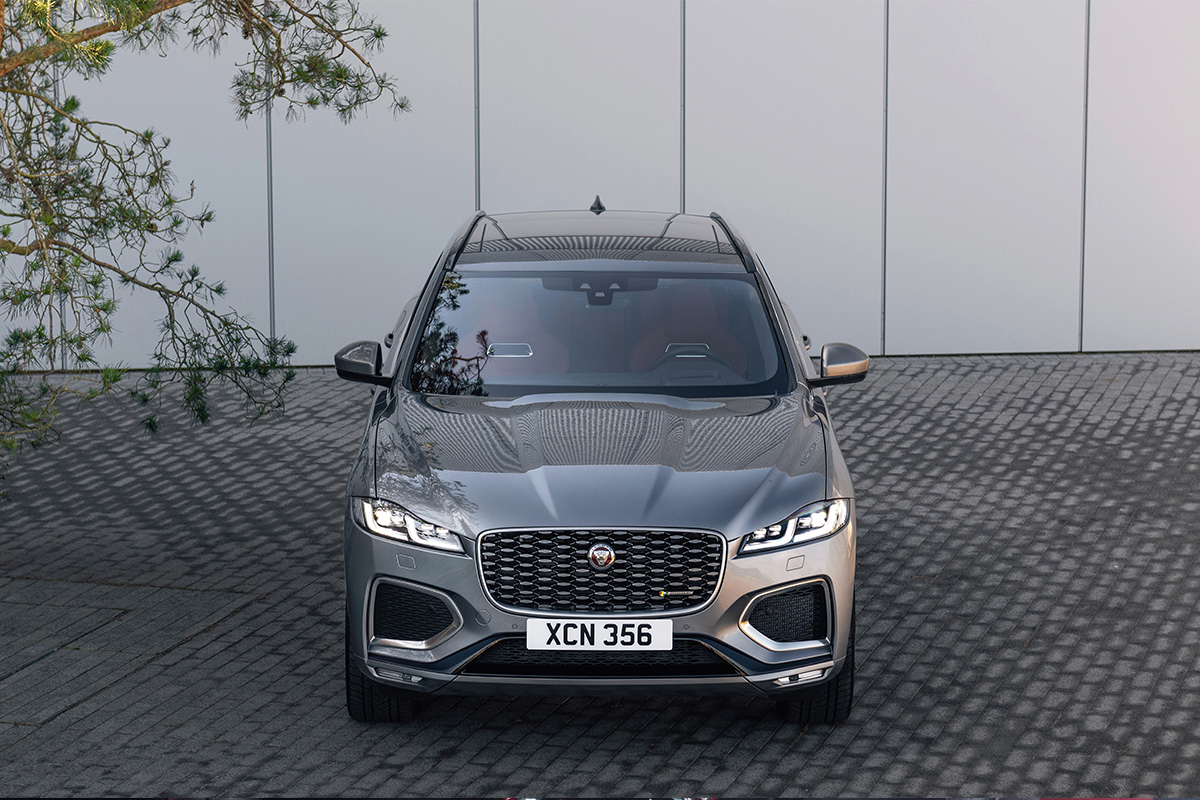 With LED headlights and a new bonnet, the Jaguar F-Pace looks more like a Jaguar. Photo: Jaguar 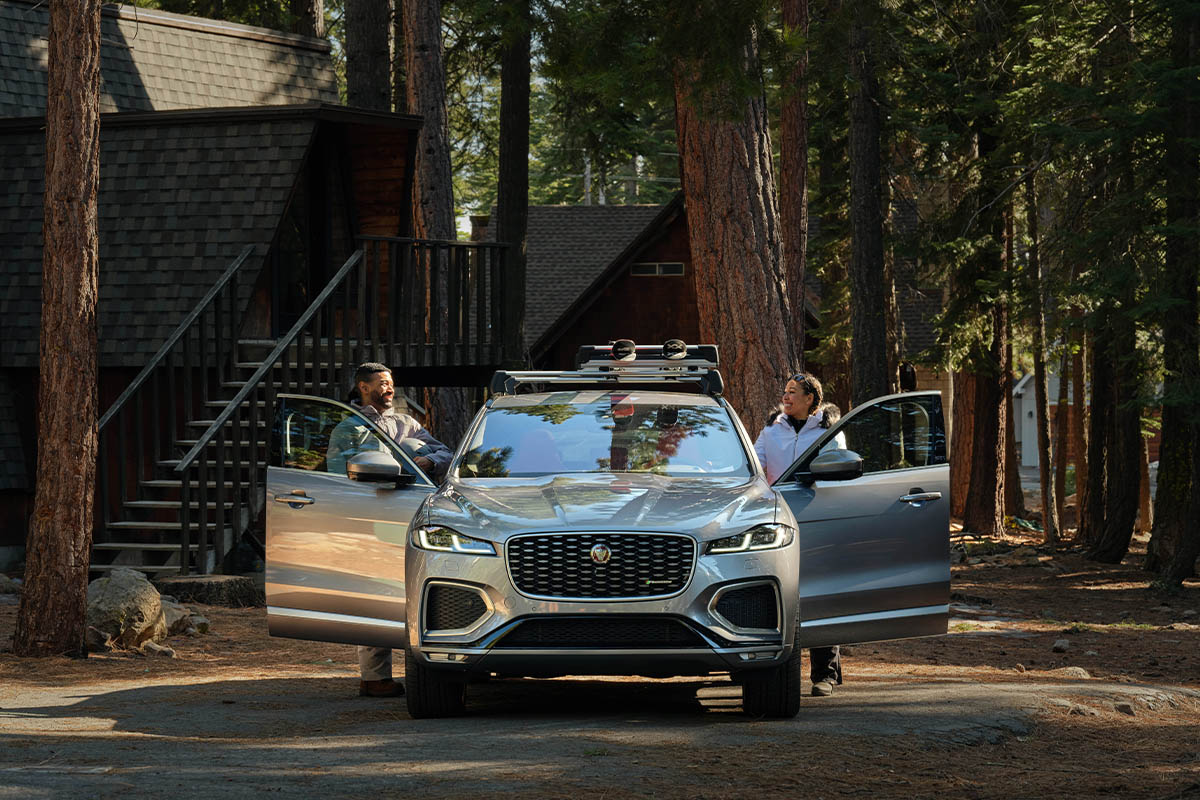 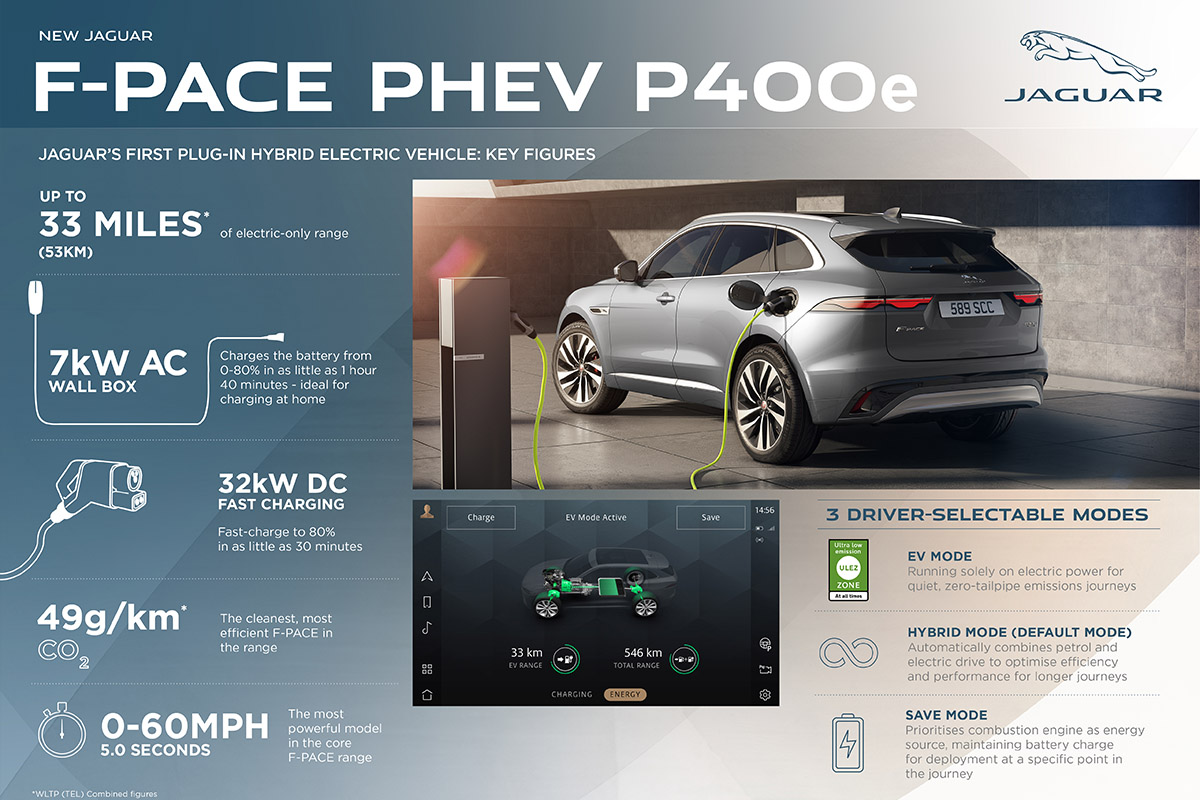 Jaguar states that the facelift gives the F-Pace “a cleaner, more assured presence”.

As standard you get new super slim LED quad headlights that automatically adjust to signs and oncoming traffic, while the rear gets slimline lights that first debuted on the Jaguar I-Pace, alongside a new tailgate. R-Dynamic spec provides sportier-looking gloss black elements. 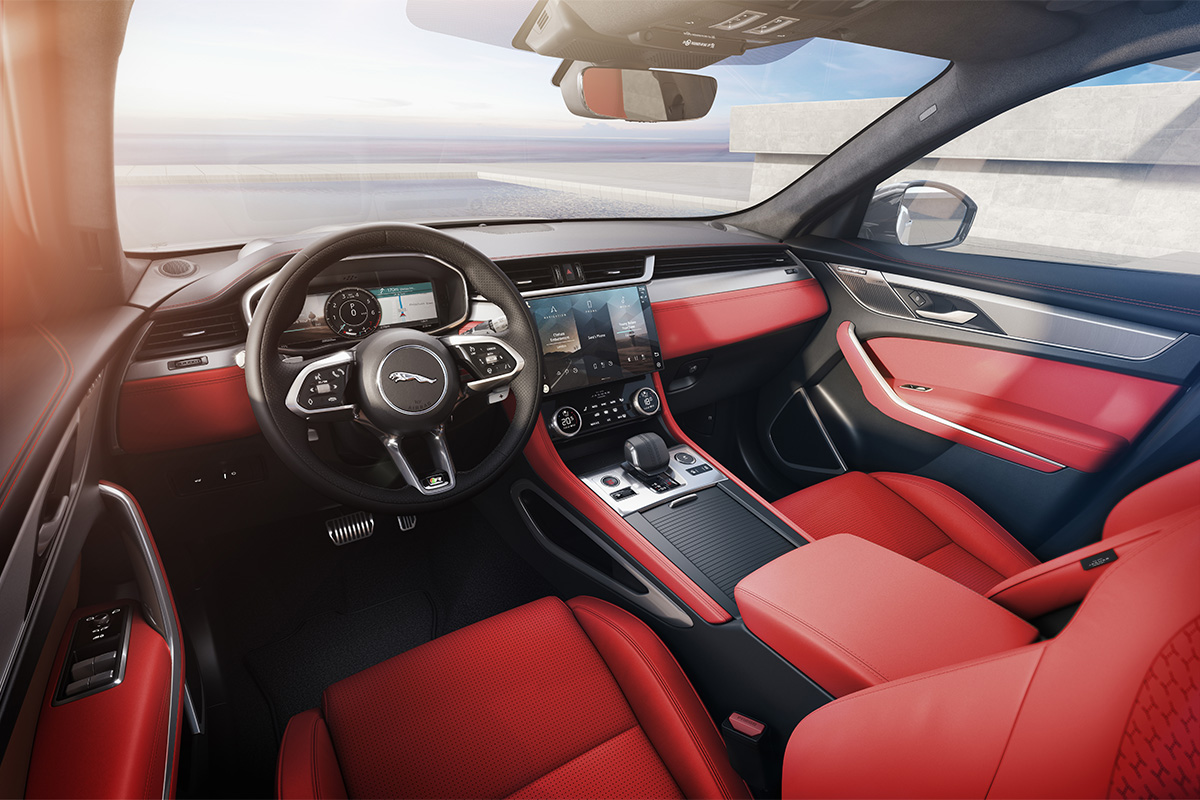 The luxurious interior of the new Jaguar F-Pace takes it into a new world. Photo: Jaguar 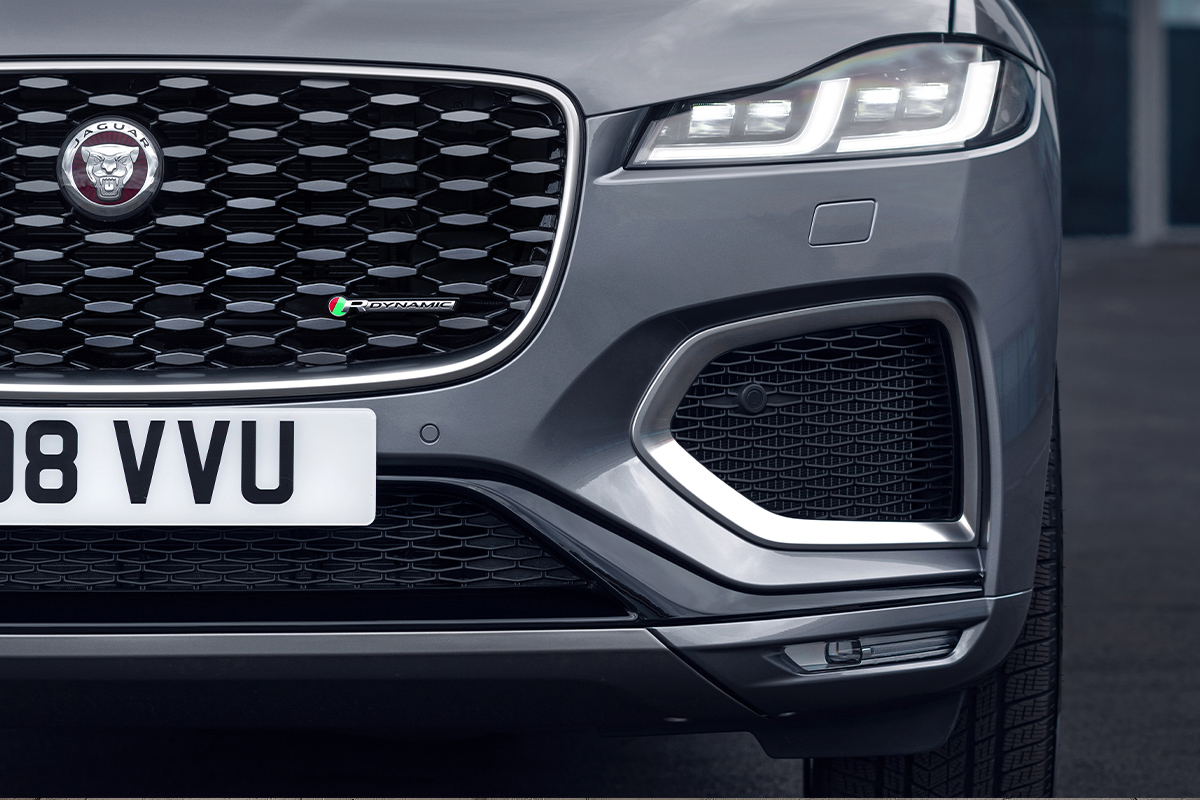 Jaguar for the first time has introduced a hybrid version of the Jaguar F-Pace SUV. Photo: Jaguar
[/img]

The interior of the previous F-Pace is undoubtedly the most negatively commented aspect of the SUV and Jaguar has listened and totally revamped it “with heightened luxury, enhanced connectivity and greater serenity and refinement”.

At the heart of the new interior is a seamlessly integrated centrally-mounted 11.4-inch curved-glass HD touchscreen in an elegant magnesium alloy casing, which controls the new Pivi Pro infotainment system with Apple CarPlay as standard – you can connect two phones simultaneously via Bluetooth. Authentic finishes, including wood veneers and aluminium, feature in beautifully formed shapes such as the upper door insert and full width ‘piano lid’ that is formed across the width of the instrument panel. Laser-etched mid-line speaker frets and the metallic rotary dial of the JaguarDrive Control epitomise the attention-to-detail.

There are new seats featuring wider cushioning, new massage functions and enhanced coverage of the heated and cooling areas.

“The new F-Pace is dynamic and assertive with an elegant stance on the road – it represents a significant development of Jaguar design language. The heightened luxury and attention to detail inside the F-PACE with seamlessly integrated state-of-the-art technologies ensure both driver and passengers feel a real sense of occasion whenever they get in the vehicle,” said Julian Thomson, Jaguar Design Director.

There is a new 12.3-inch HD Interactive Driver Display with enhanced graphics and a full-screen navigation mapping with turn-by-turn instructions, digital dials, media, contact list or infotainment details. With optional Head-up Display technology, the idea is to stop drivers being distracted.

Jaguar has added ‘Active Road Noise Cancellation’ technology that is meant to constantly monitor vibrations from the road surface before calculating the opposite phase sound wave needed to remove the noise heard by the driver and any passengers. 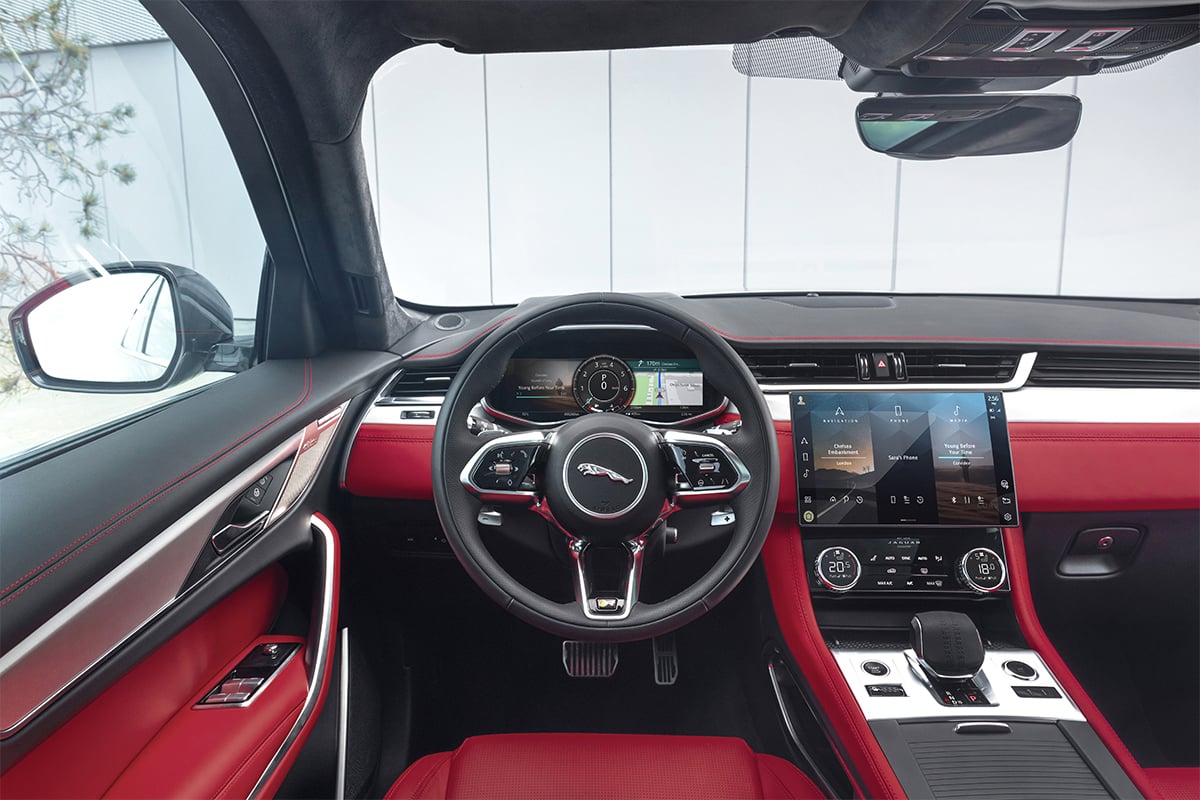 The brand new interior that was wanted by most F-Pace enthusiasts. Photo: Jaguar 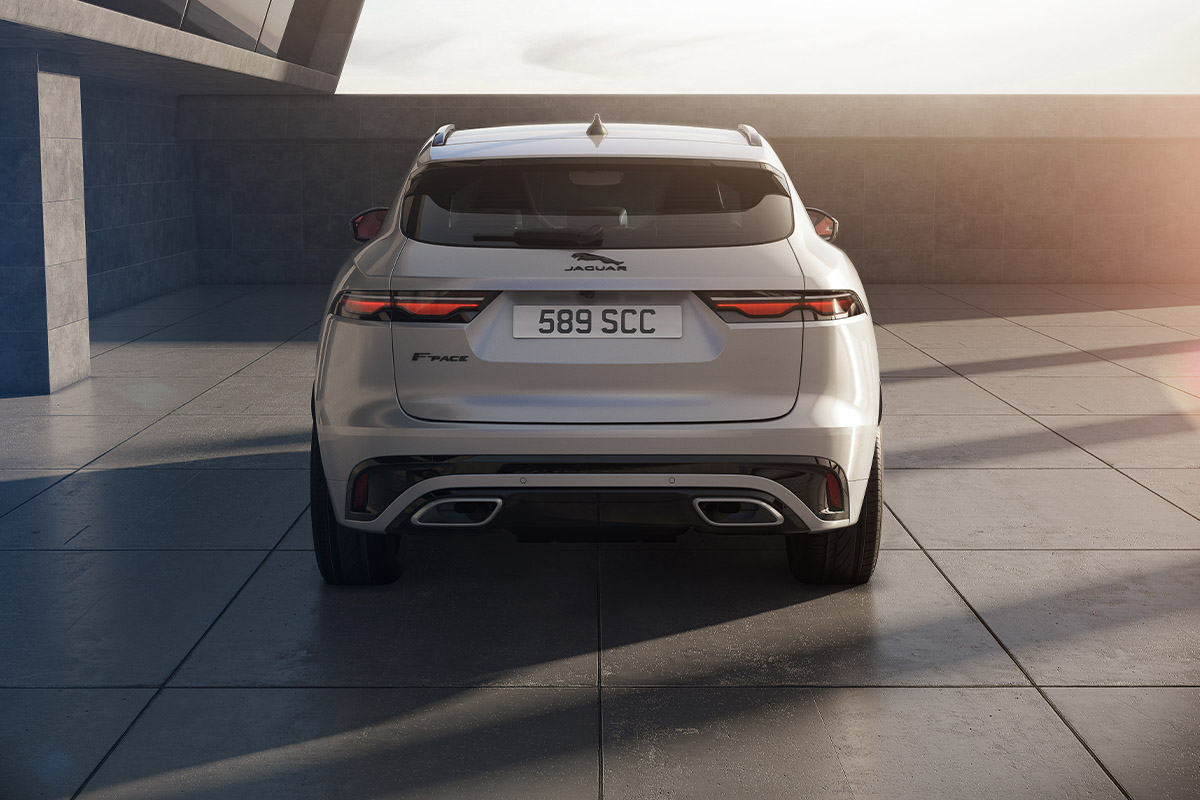 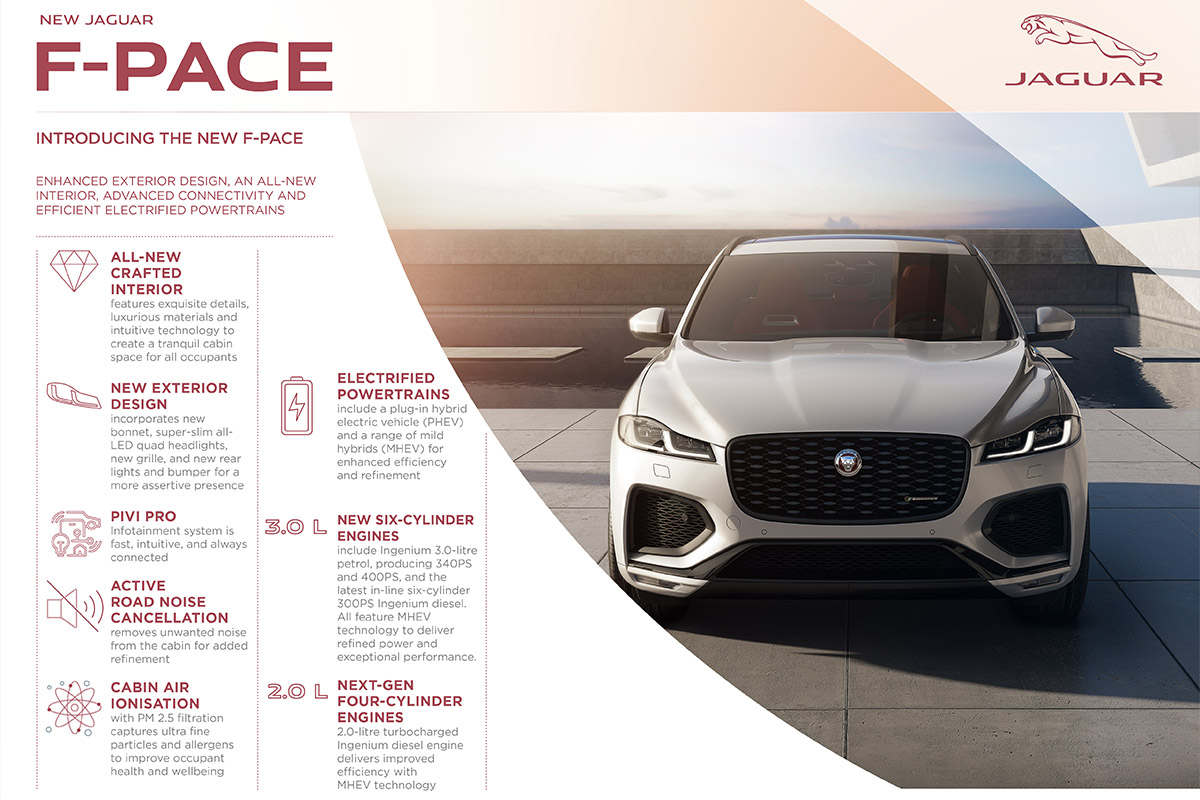 An overview of the new Jaguar F-Pace. Photo: Jaguar
[/img]

“This means quieter levels within the cabin and improved refinement that helps to reduce fatigue, commonly associated with prolonged exposure to low-frequency noise. Cabin occupancy is monitored, with the system continuously optimising performance to deliver the best possible experience for everyone,” said Jaguar.

Buyers in the US will have three options to choose from, with an eight-speed automatic and all-wheel drive both standard across the range. None of the powertrains are a plug-in hybrid offered overseas.

With production in the UK starting in November, the F-Pace Series II is from A$74,990 before on-road costs. Availability and pricing for the 2021 Jaguar F-Pace in the US is yet to be announced.