Latest Rolls-Royce aims to reject the superficial expressions of wealth

The British luxury carmaker calls it ‘post opulent’, but beyond the unconventional wordplay is one of the finest feats in engineering and design. 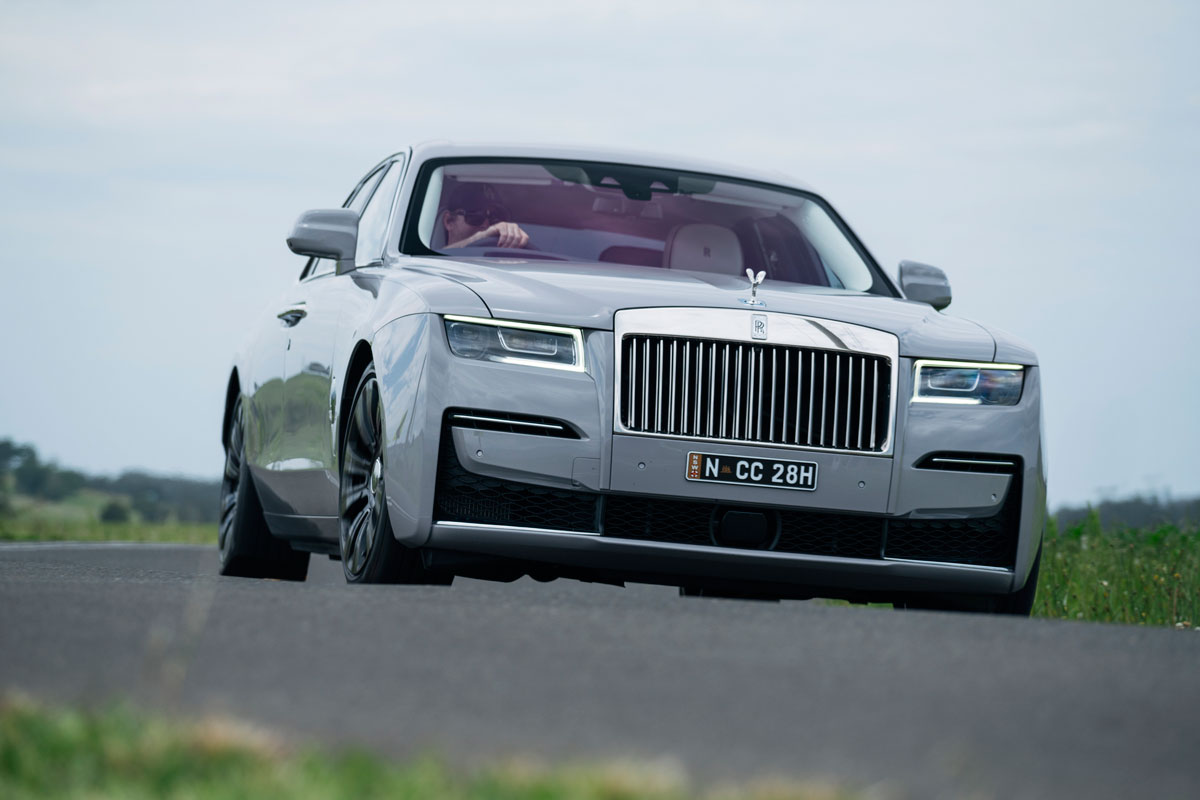 It only takes a quick glance to notice that the new Rolls-Royce Ghost has a certain quality that its siblings do not. The signature lines are certainly there, but it’s those very lines that have been meticulously carved down and refined which give the Ghost a sleek and distinctive edge like no other model in the current line-up.

This refinement towards a less ostentatious presence is what Rolls-Royce calls ‘post opulent’ – the rejection of the superficial expressions of wealth – and it forms the very backbone of the new Ghost today.

It’s an odd concept given that the British marque’s target market is built entirely on the wealthy, but according to the carmaker, this is in direct response to current clientele demands. More specifically, the younger market wants a Rolls-Royce that can be used for both business pursuits and personal driving pleasure. A requisite that was rarely the case two decades ago.

Grant told The CEO Magazine exclusively that this approach echoes an aesthetic that eradicates additional flourishes and shut lines, with every Ghost being symmetrically finished to provide a feeling of a singular canvas or “one monolithic sculpture” from front to rear.

“We’ve maintained the natural presence of Ghost but made sure it exudes calm confidence through its proportions.”

It’s a lot to take in, but a closer look at the extensive list of design features should give interested parties a better idea of what exactly is going on under the skin of the new Ghost – a true expression of rolling art. 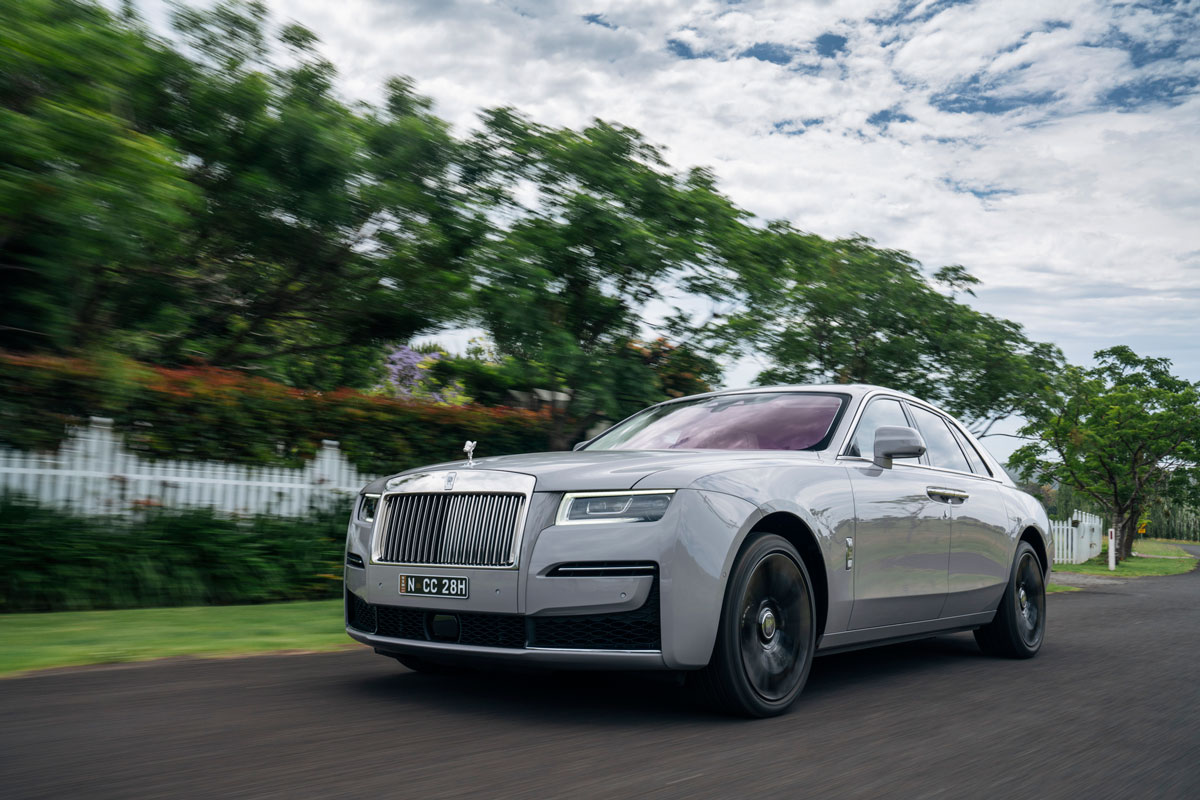 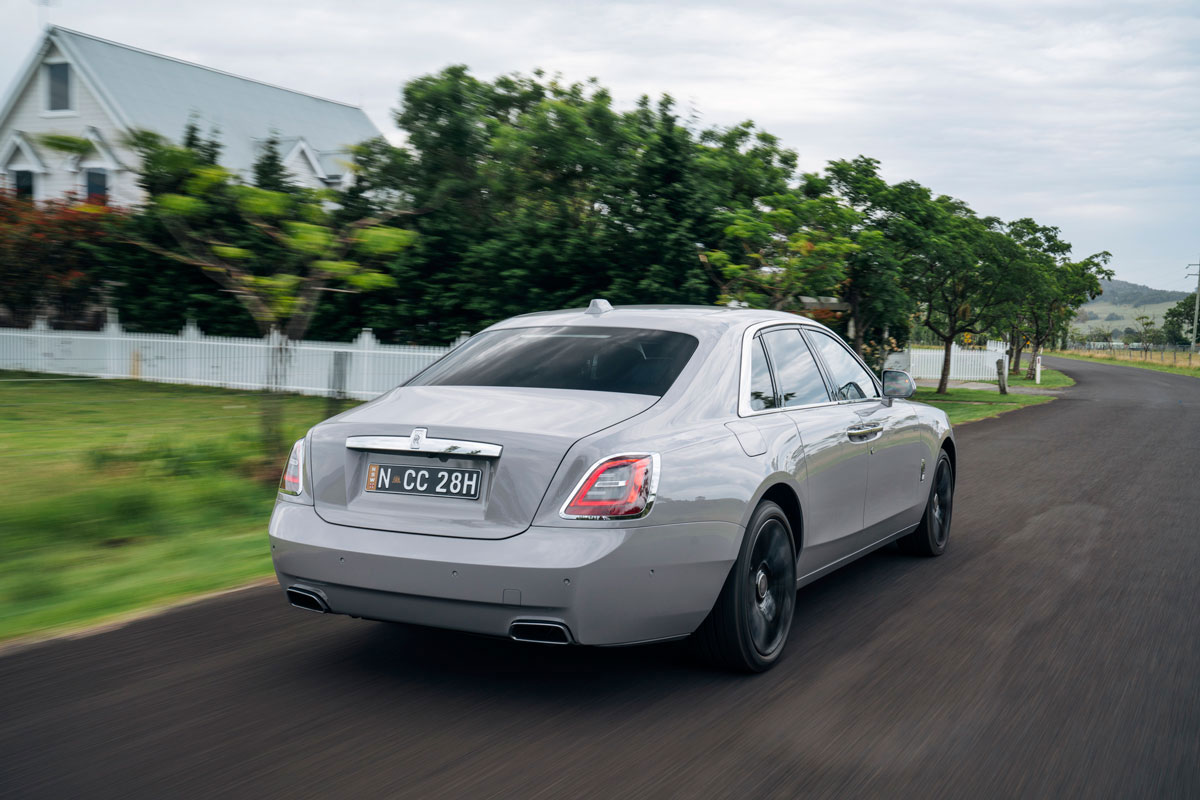 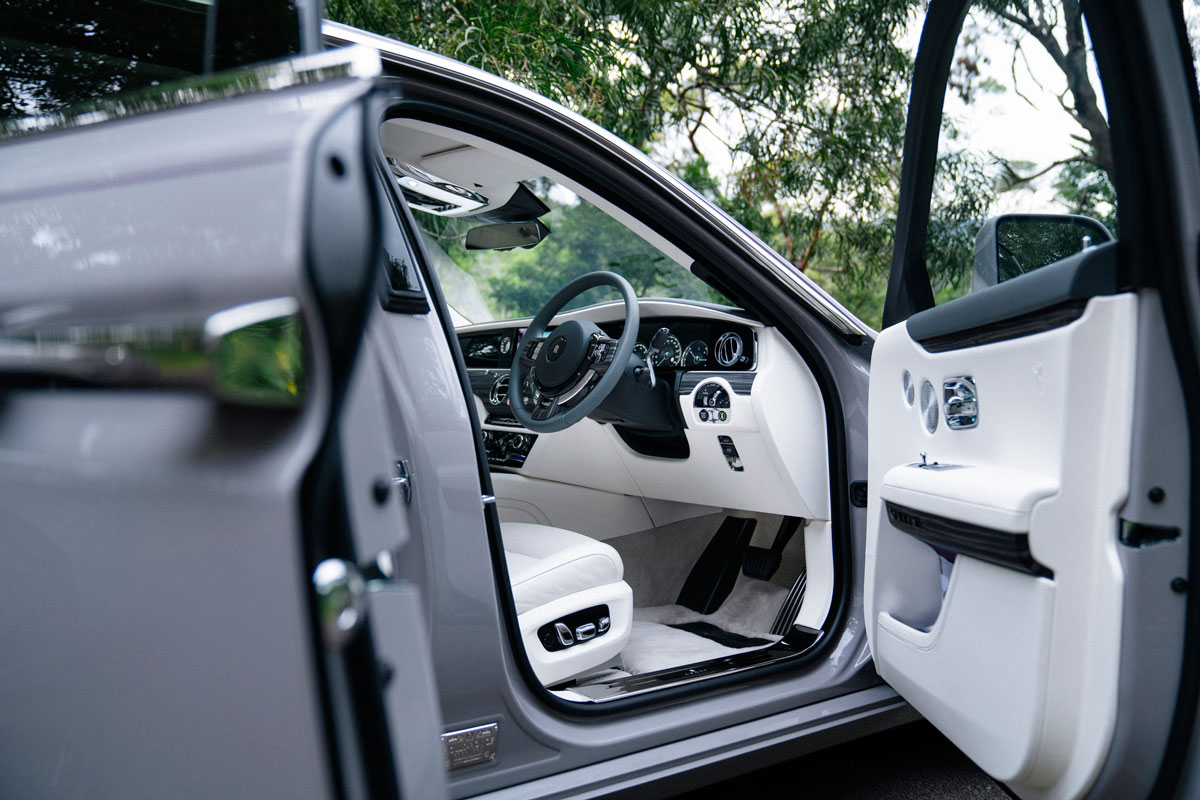 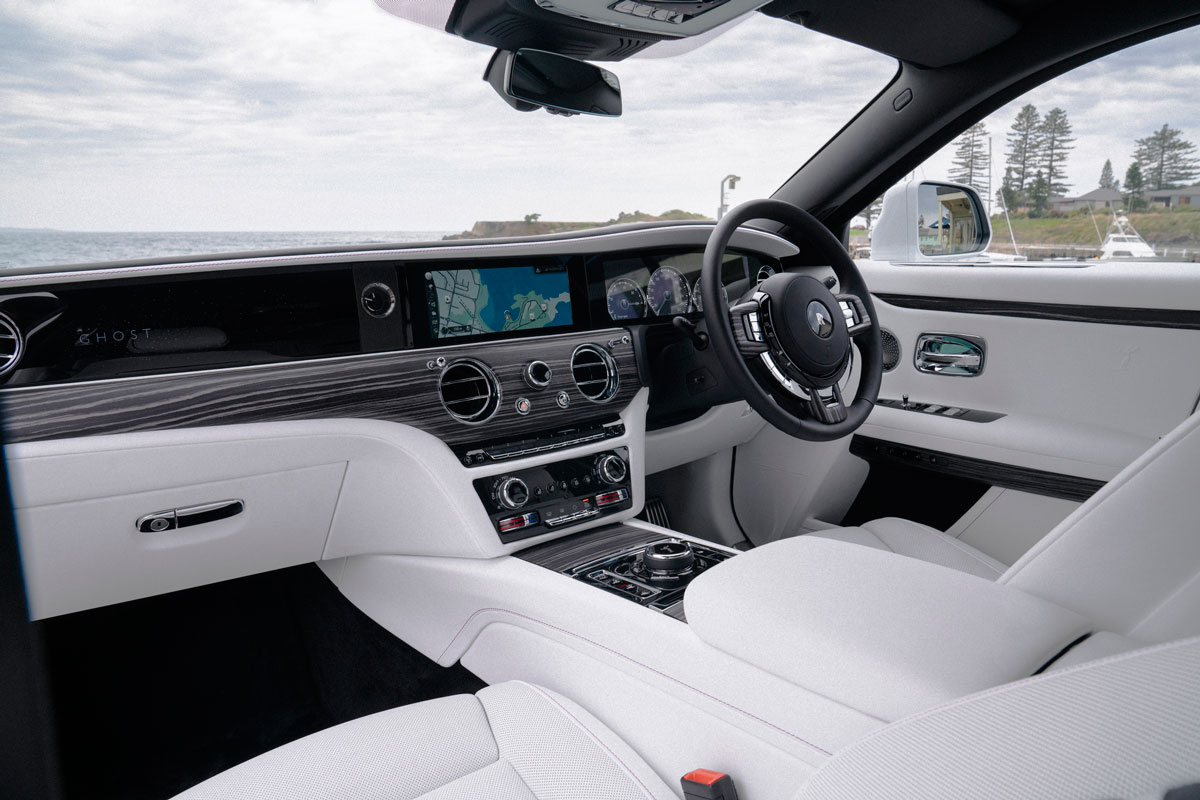 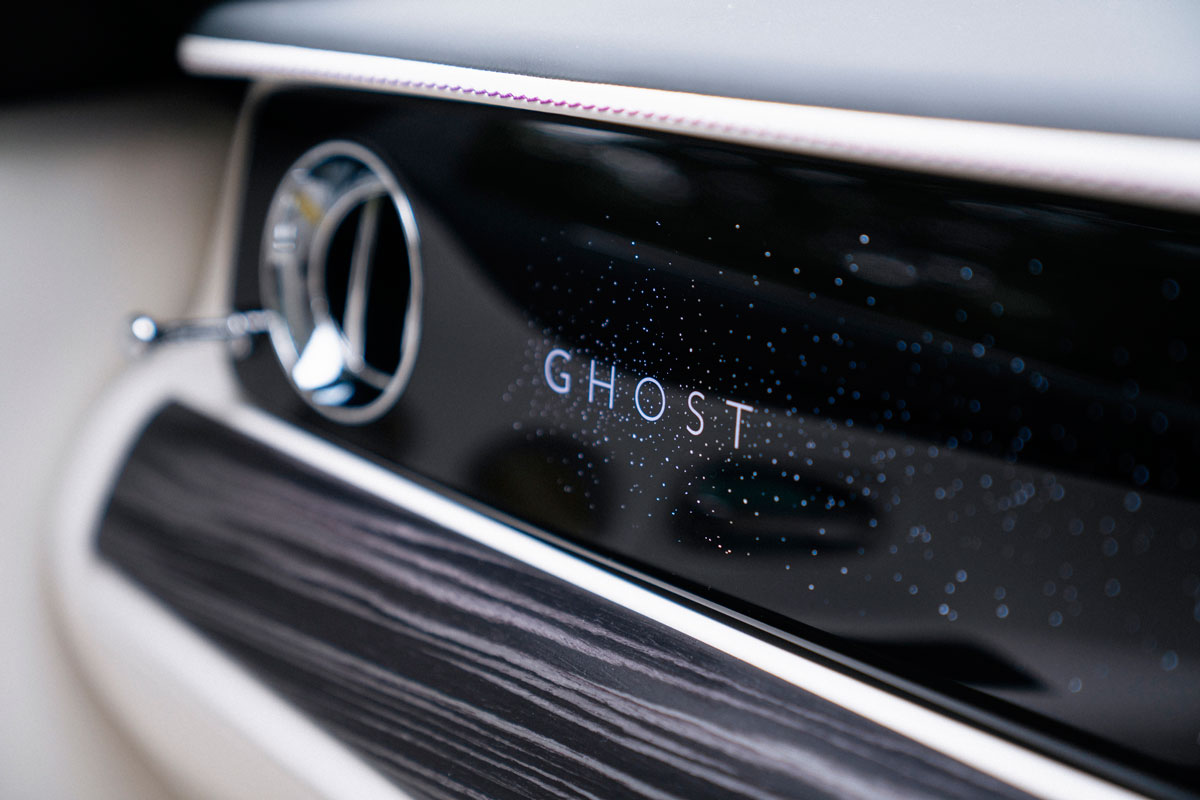 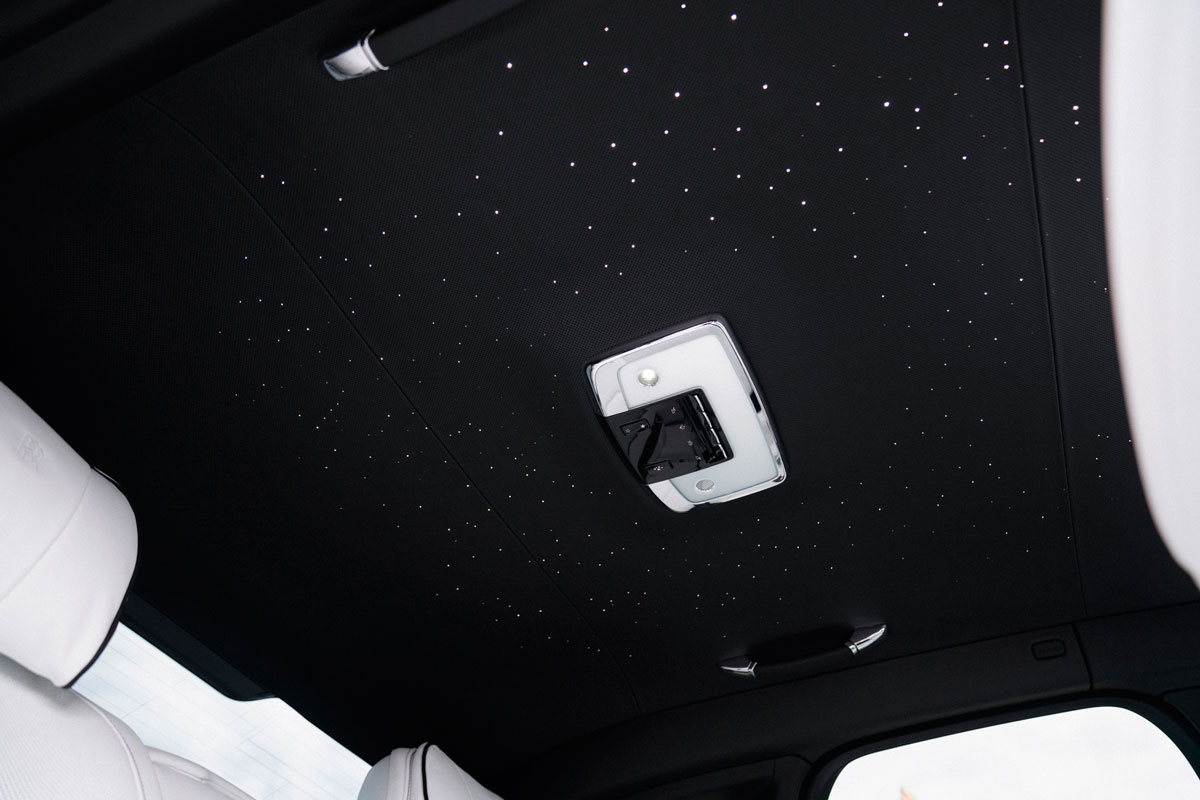 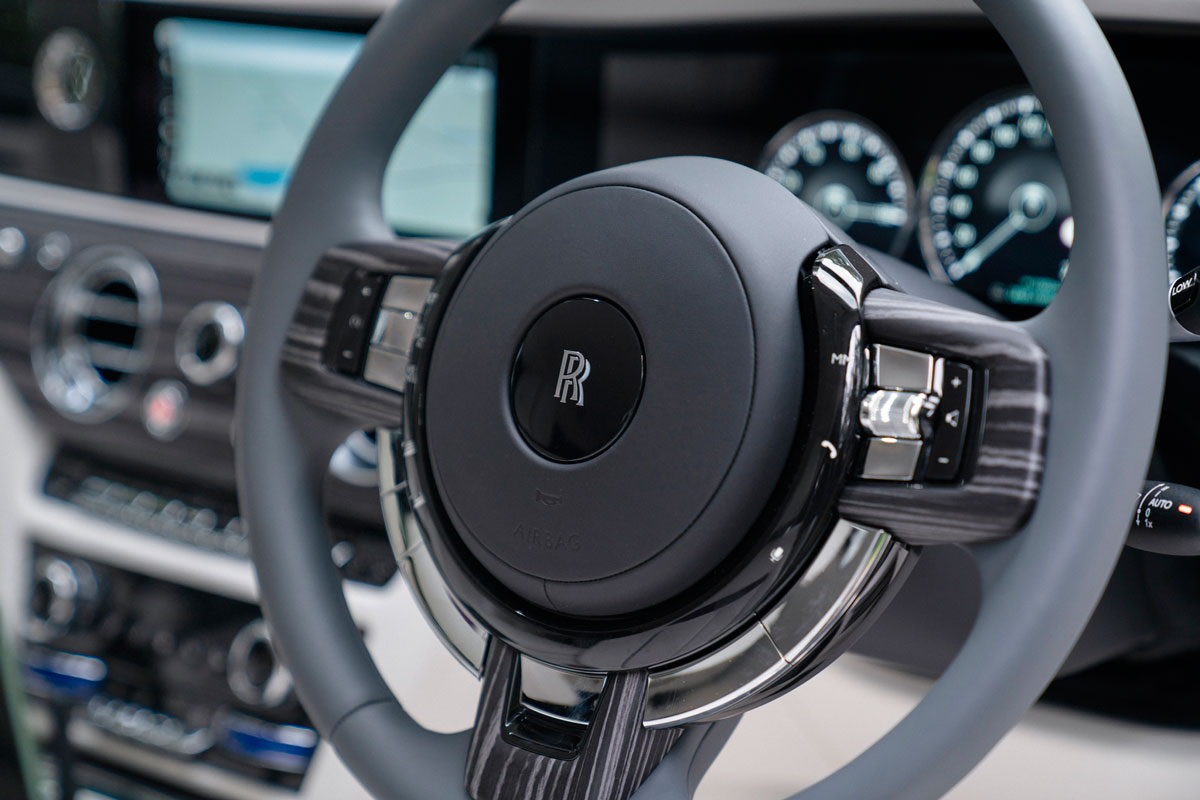 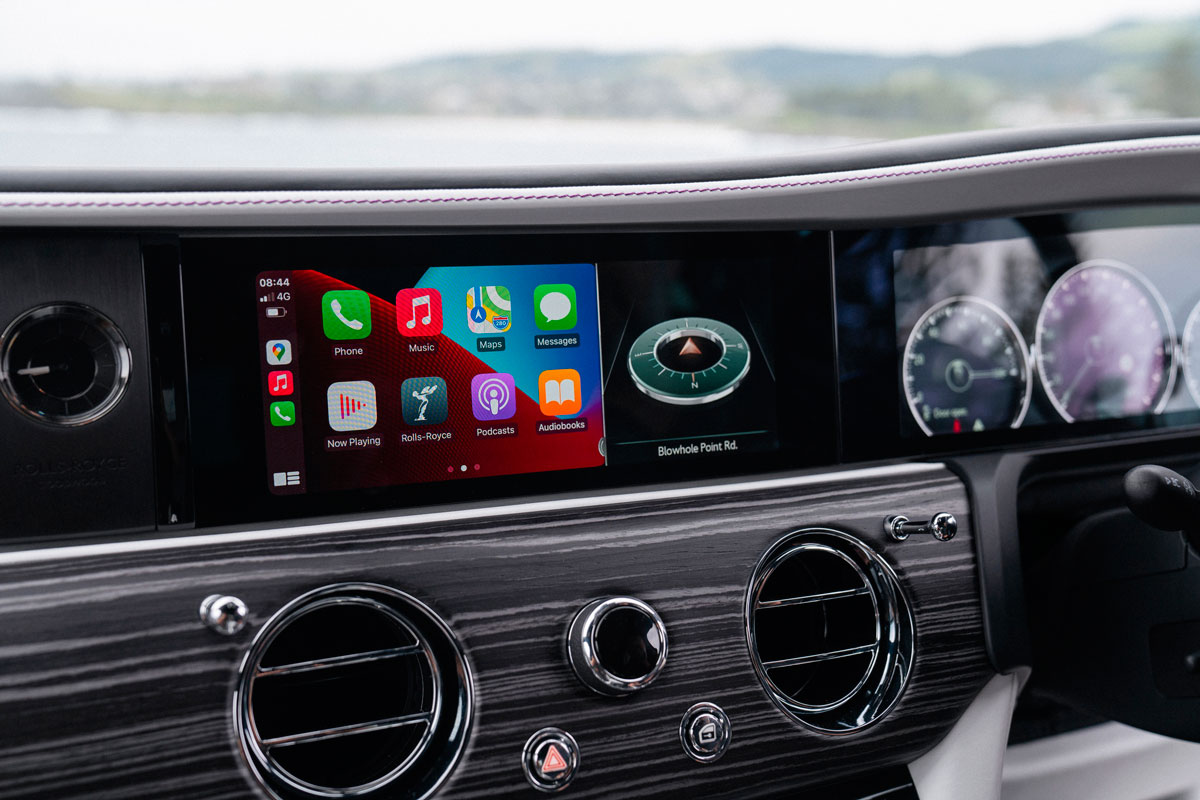 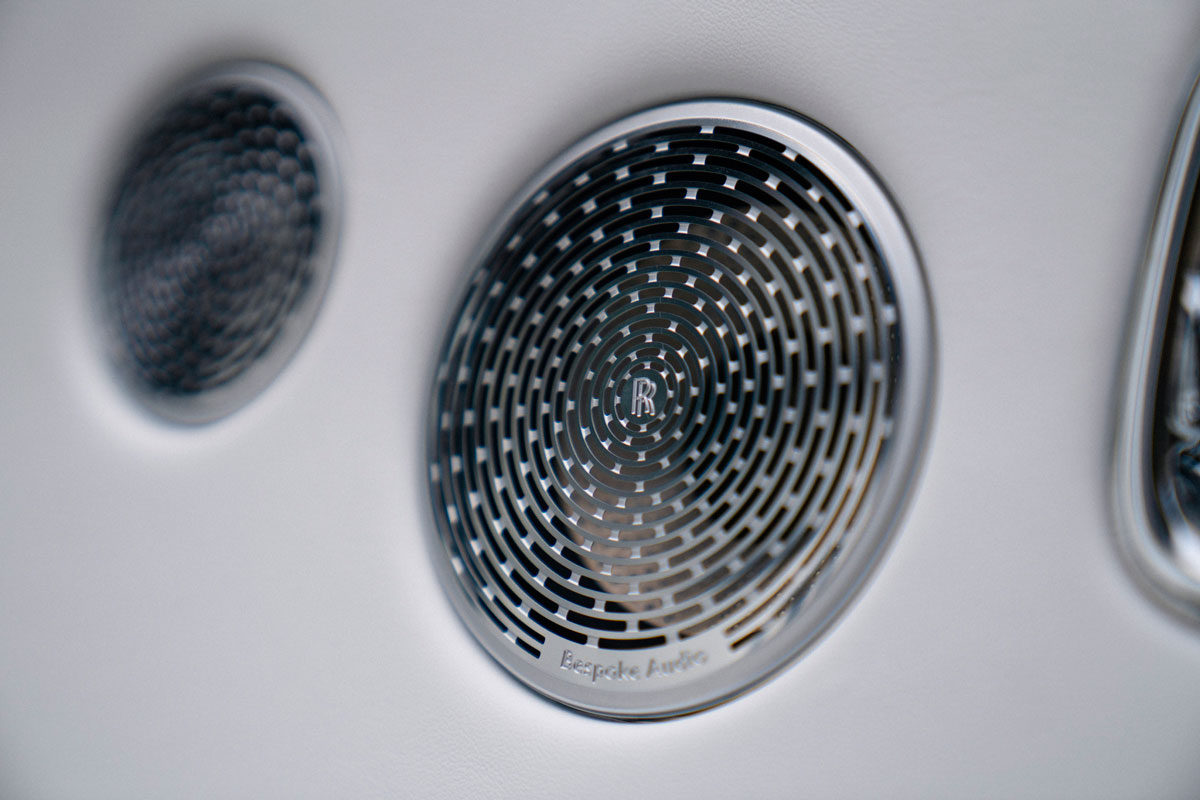 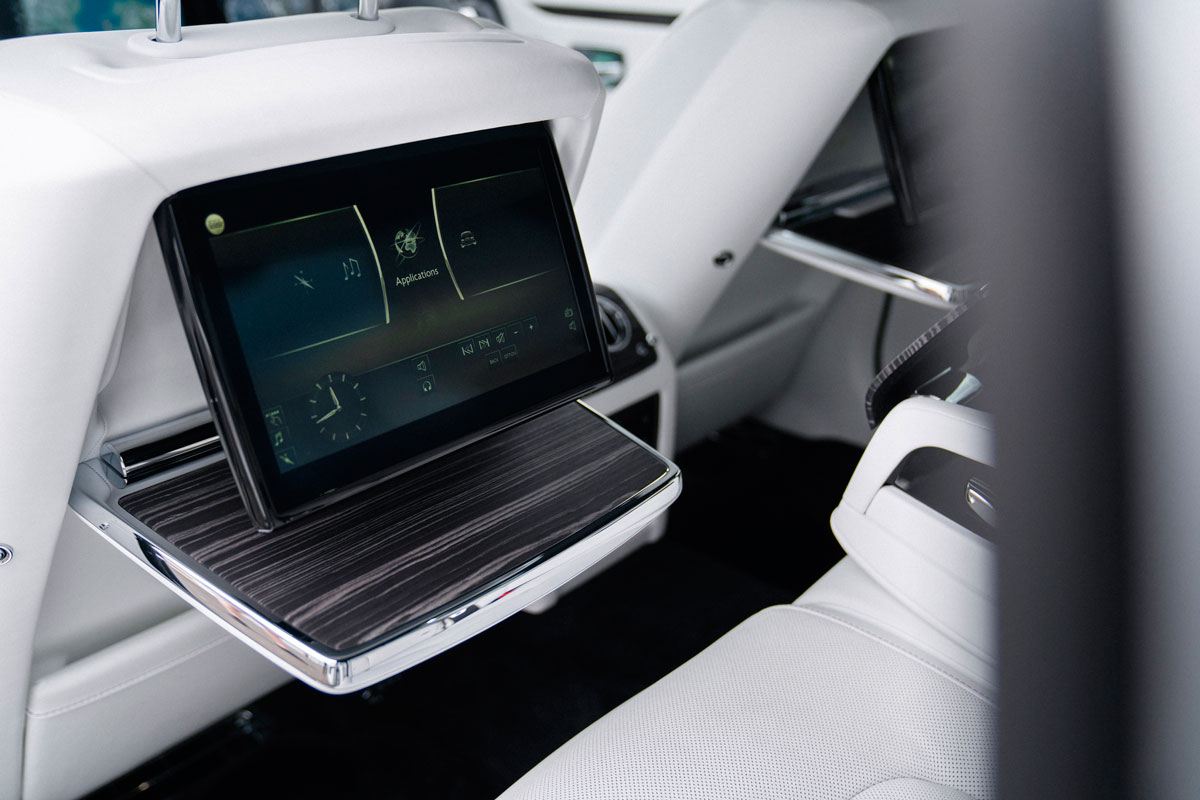 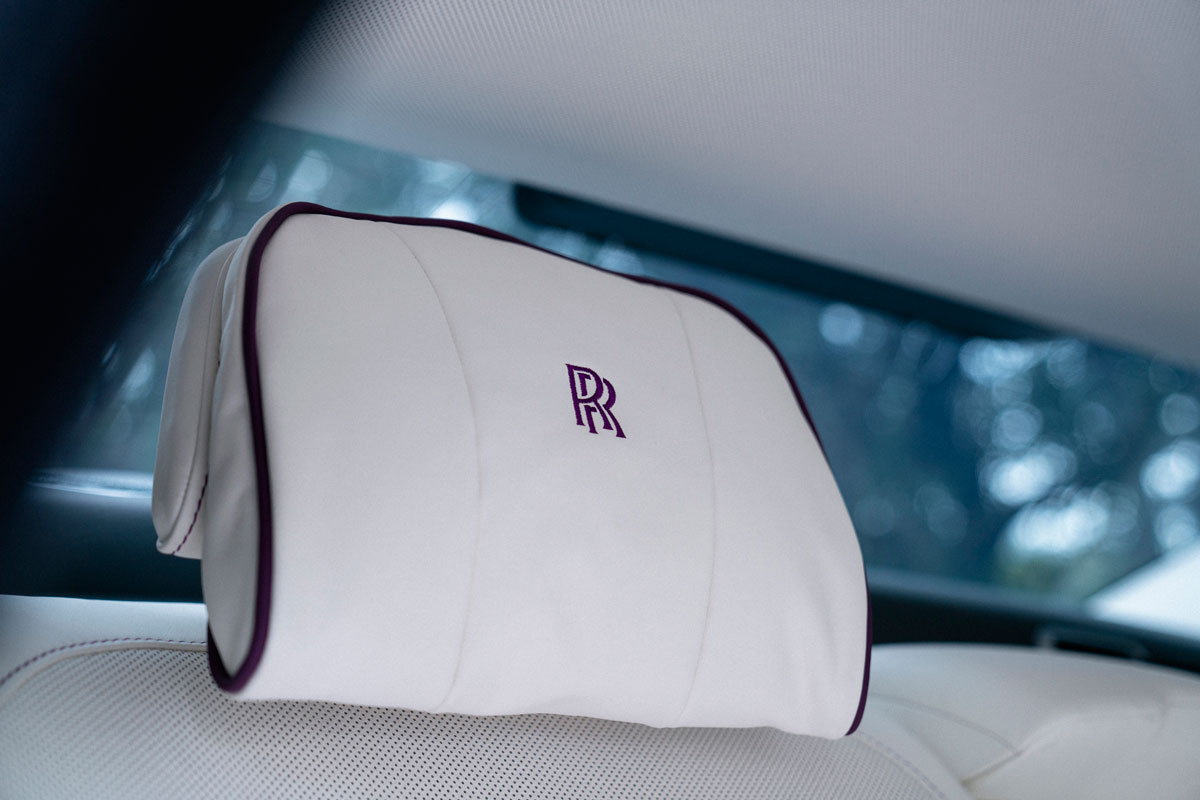 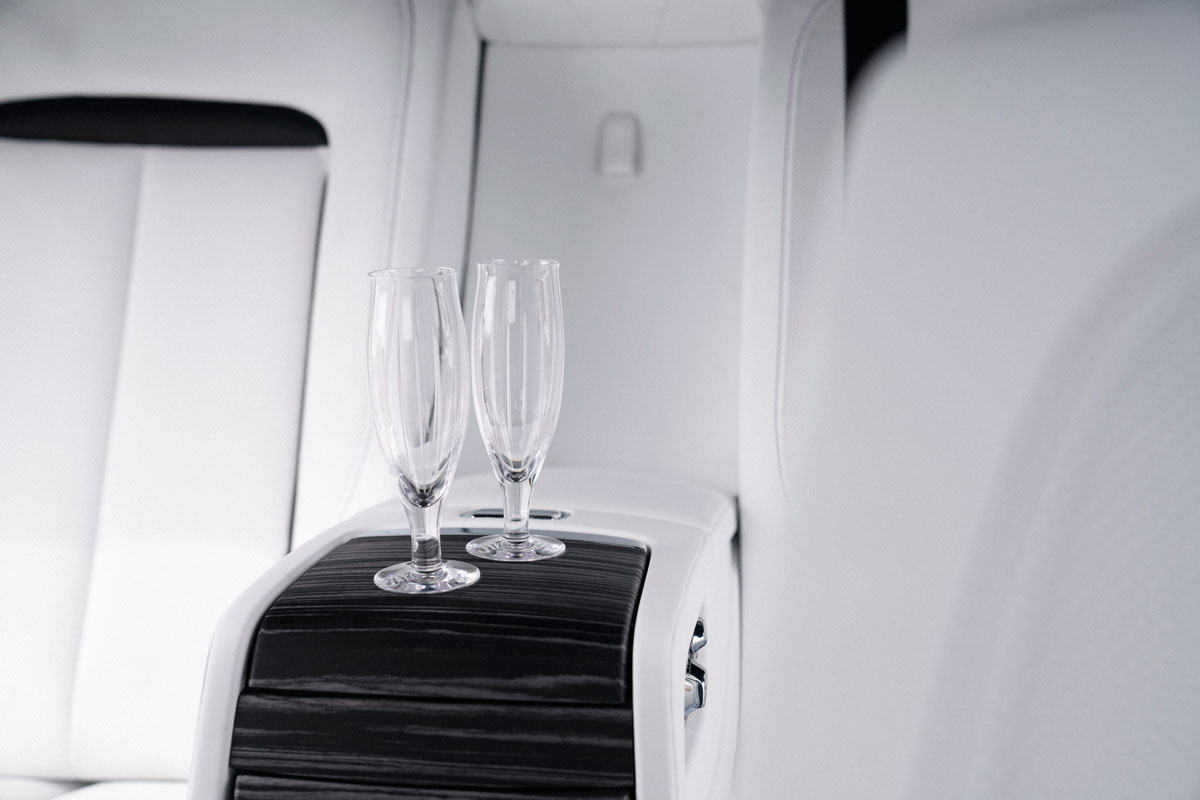 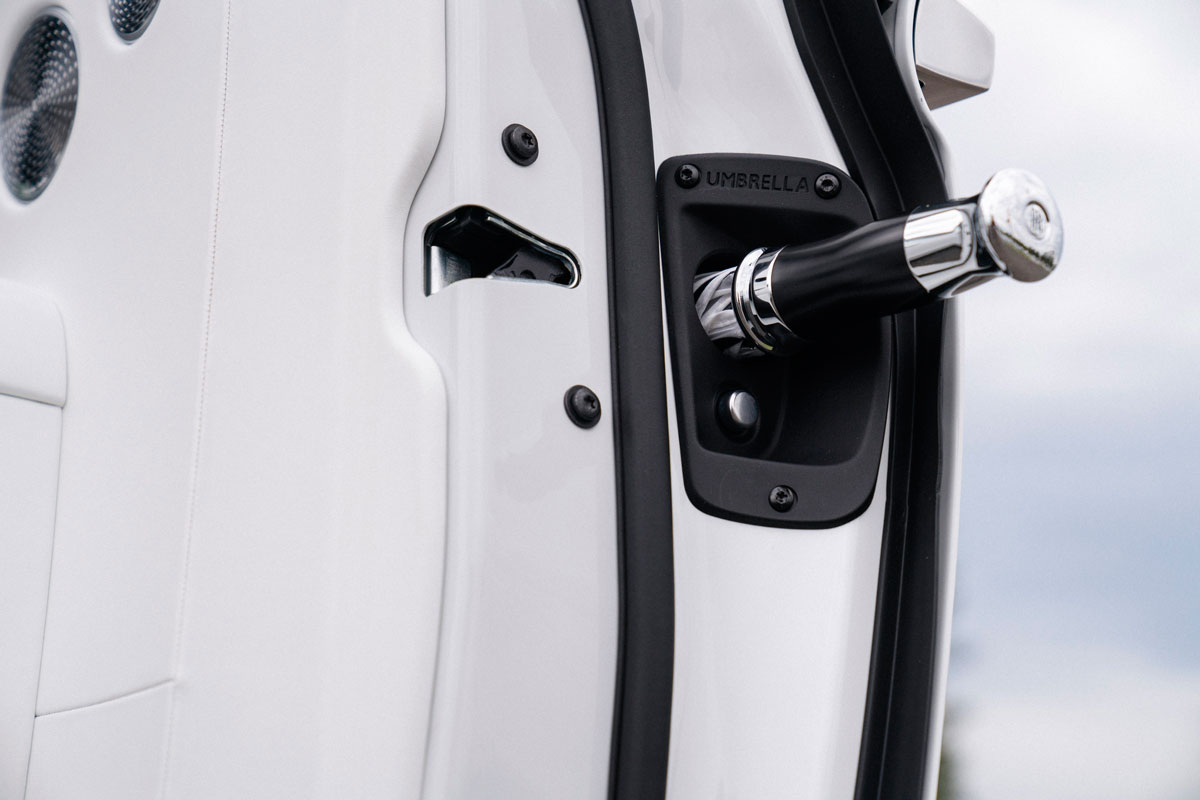 Externally, the new Ghost wears a familiar front grille, but this time its signature vanes are softly illuminated by LEDs to enhance the car’s presence without being too showy. Implementing this element was a design process in itself that coincides with the vehicle’s seamless hand-welded aluminium body structure. The latter is a move that specifically creates a uniform fluid canvas that’s free of shut lines found in typical cars. Even finer details like the iconic Spirit of Ecstasy is devoid of surrounding panel lines and sits uninterrupted on the bonnet for the first time ever.

The car’s side profile is accentuated by a single straight stroke that is used to emphasise its length. The subtly arched roof line also helps reinforce the Ghost’s dynamism while the rear tail-lights echo the contemporary Rolls-Royce design with its barely-there panel gaps.

The same ‘less is more’ ethos extends into the interior. It’s a unique take on an extravagant cabin, which the company says is thanks to the busy lives of customers who aren’t looking for a constant reminder of their success or overly busy details.

“The Ghost cabin has always been a sanctuary; a thinking space,” Grant says.

“The challenge for our craftspeople is immense – without distraction, they have to work without complicated patterns, which exposes any error – so a single stitch line must be perfect.

“The wood, for example, is not hidden under lacquer – they’re open-pore so the veneer can be felt.”

The luxurious fit-out is extensive, but worthy mentions include an illuminated fascia on the passenger side dash featuring more than 850 stars surrounding a glowing Ghost nameplate, which only presents itself when requested. This feature alone took two years and over 10,000 collective hours to develop.

Another feature is the Ghost’s next-generation self-closing doors, which can now be opened with power assistance for the first time since its introduction. Passengers first open the door with one pull of the interior handle, then allow the handle to return to its resting position while checking for potential hazards. Once it’s clear, the passenger then pulls and holds the door for full power assistance on opening. To stop the door from opening any further, the passenger simply stops pulling the handle, which will then engage the door brake. Closing the door completely automatically is achieved with the push of a button on the exterior door handle. Manual door close can also be power assisted regardless of hill or driveway angles.

Engineered to be enjoyed 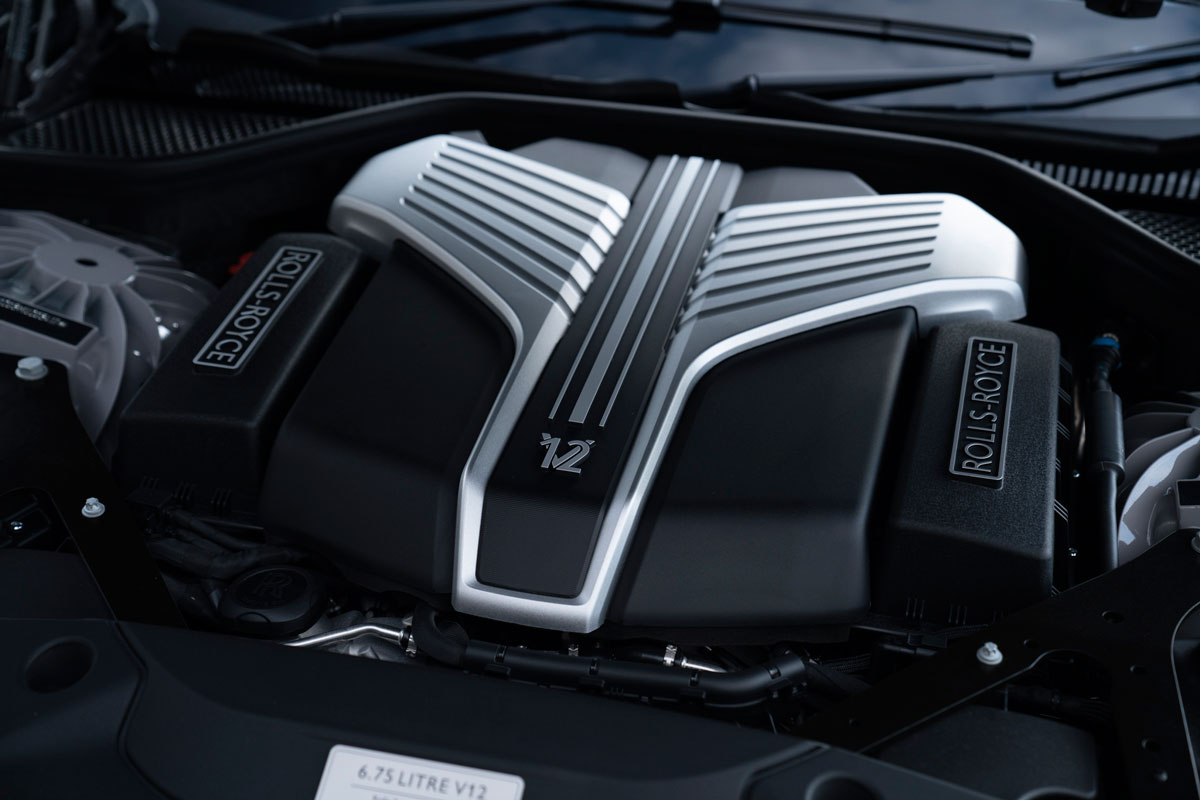 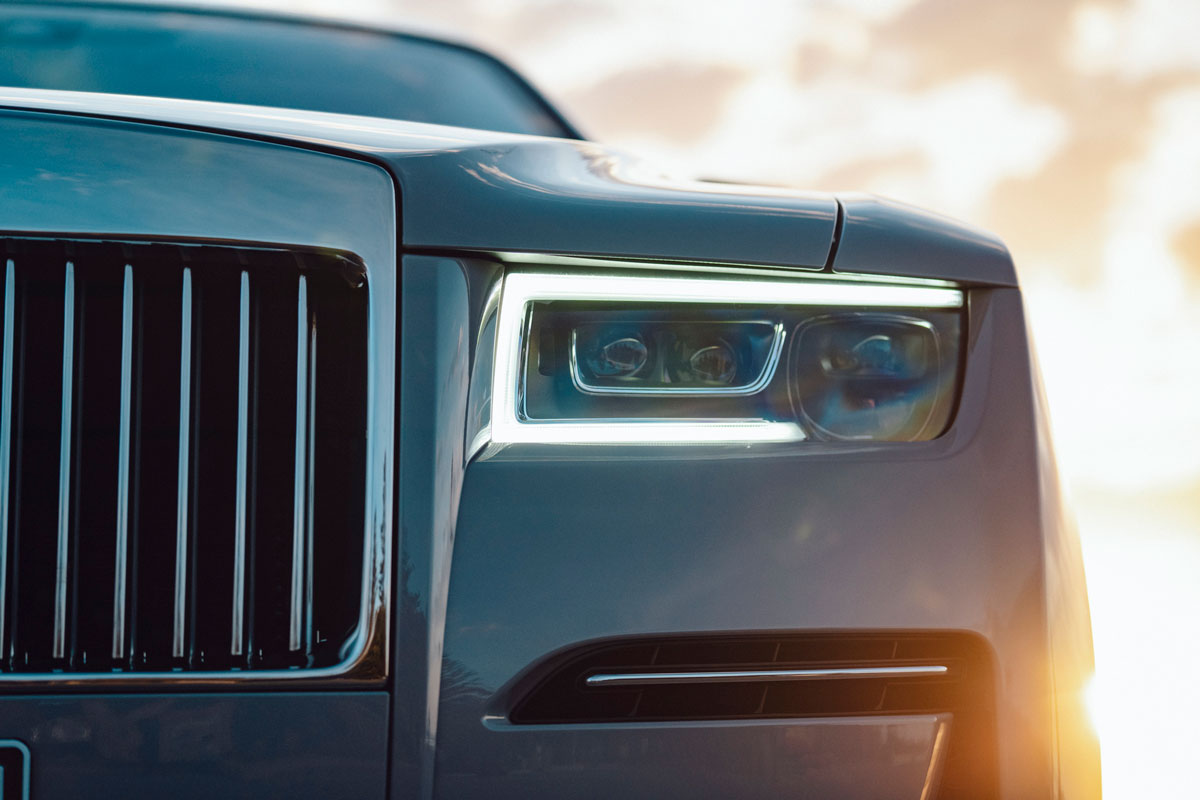 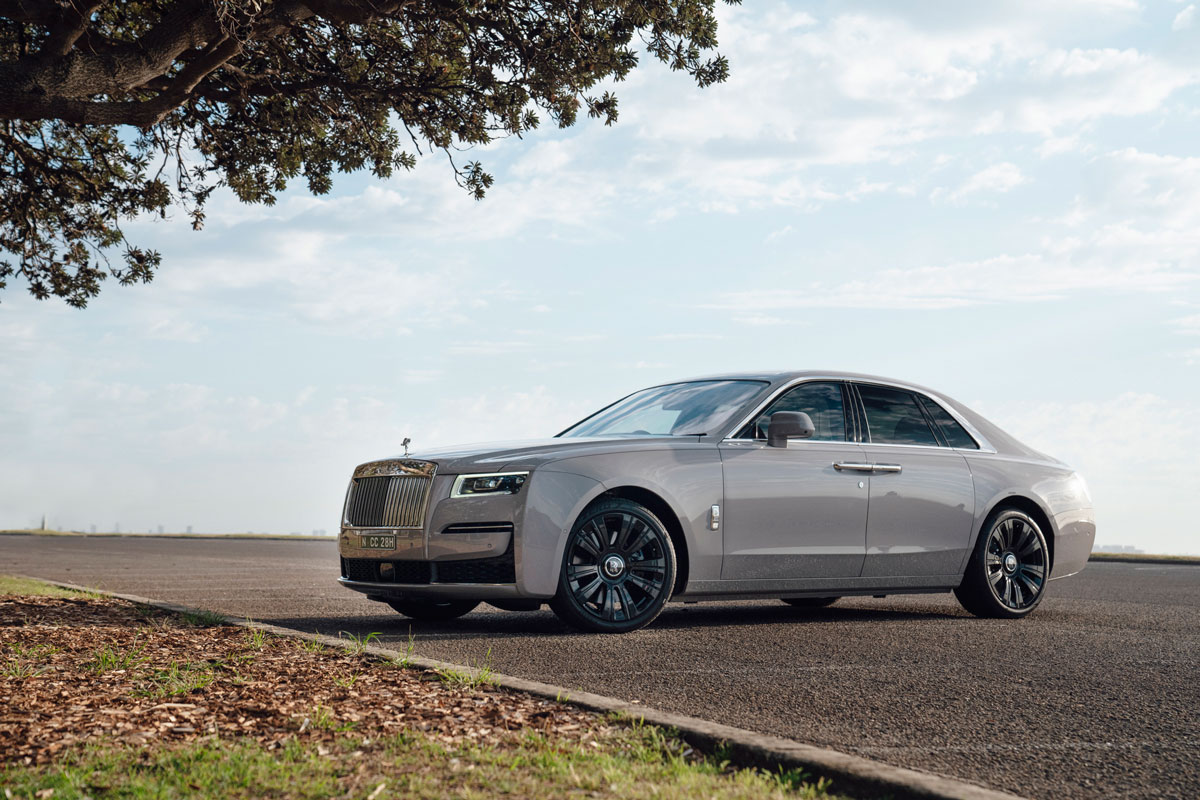 With driver enjoyment forming a crucial component for today’s Ghost customer, Rolls-Royce went out of its way to develop a car that could actually be used by owners as opposed to just being chauffeured.

The Goodwood outfit rejected the use of a pre-existing platform from its parent company and instead configured the marque’s proprietary aluminium space frame architecture to incorporate elements of the brand’s existing model portfolio such as all-wheel drive and all-wheel steering. It then adapted the rigid structure to accommodate the latest advances in Rolls-Royce’s renowned ‘magic carpet ride’ and dynamic capabilities such as the world-first Planar suspension system. The result is a silky smooth ride that adapts to road conditions in real time while delivering exciting driving dynamics in a large car that shouldn’t have such agility.

At the heart of the Ghost is a 6.75-litre twin-turbo V12 engine that delivers 420 kilowatts of power and 850 newton metres of torque to all four wheels. All-wheel steering is also in place to deliver unprecedented poise and stability for more spirited drives.

With such a capable package on hand, it only leaves the question of when Rolls-Royce will embrace electric power as the days of the internal combustion come to a close.

“Our CEO has stated that we will have an electric car in this decade, and that our proposition is ‘full electric’ because we do not feel that hybrids fully fit the premise of a Rolls-Royce,” Grant says.

“Our planners, designers and engineers are currently working to make this happen. At this stage, we cannot be drawn on the specifics of a fully electric model – only to say that we will be observing the infrastructural developments in the region to allow for effortless charging and the development of battery technology.”

Read next: How Rolls-Royce survived some of history’s biggest events