Whitehaven Motor Yachts unveiled two of its latest luxury boats – the sporty Harbour Classic and the bespoke 6100 Coupé – at a showcase on Sydney Harbour. Is there anything more luxurious than sipping a flute of G.H. Mumm while you relax in a Bentley-inspired leather lounge onboard a chic yacht as it glides through picturesque Sydney Harbour?

Unless you intend to live on the prestigious yacht, we don’t think there is.

Whitehaven Motor Yachts unveiled two of its latest luxury boats – the sporty Harbour Classic and the bespoke 6100 Coupé – at a showcase on the harbour where The CEO Magazine was given an intimate tour followed by an exquisite cruise.

When you imagine a three-bedroom, two-bathroom living space with a spacious kitchen and butler’s pantry, life on the water doesn’t usually come to mind. Unless of course you’re thinking of the 6100 Coupé.

The chic vessel stuns with its superyacht-inspired radar arch, mast and extended roofline, James Bond-style pop-up glass cabinet that disappears at the touch of a button, electric window and skylights and innovative Corian use (unexpectedly included on the shower floor) throughout all zones.

Yacht designer and naval architect Misha Merzliakov told The CEO Magazine he wanted to see how far he could take boat design while revamping the Whitehaven product offering. 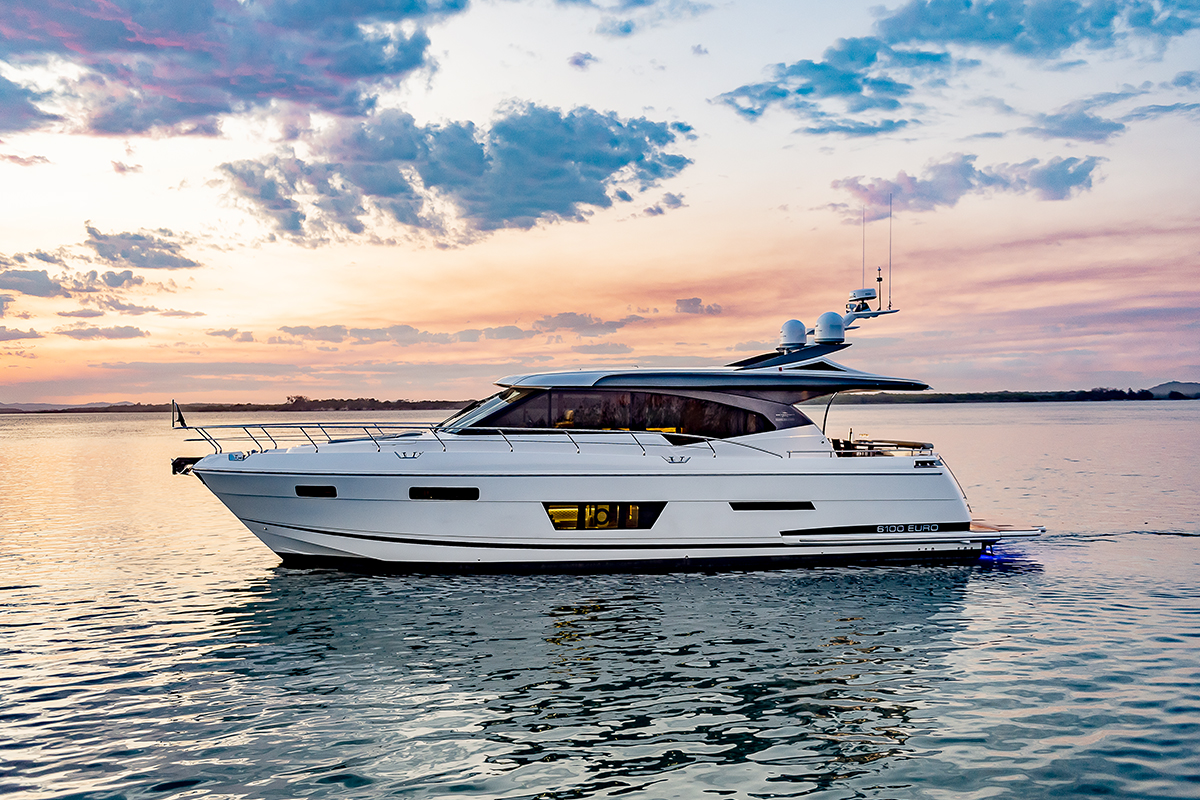 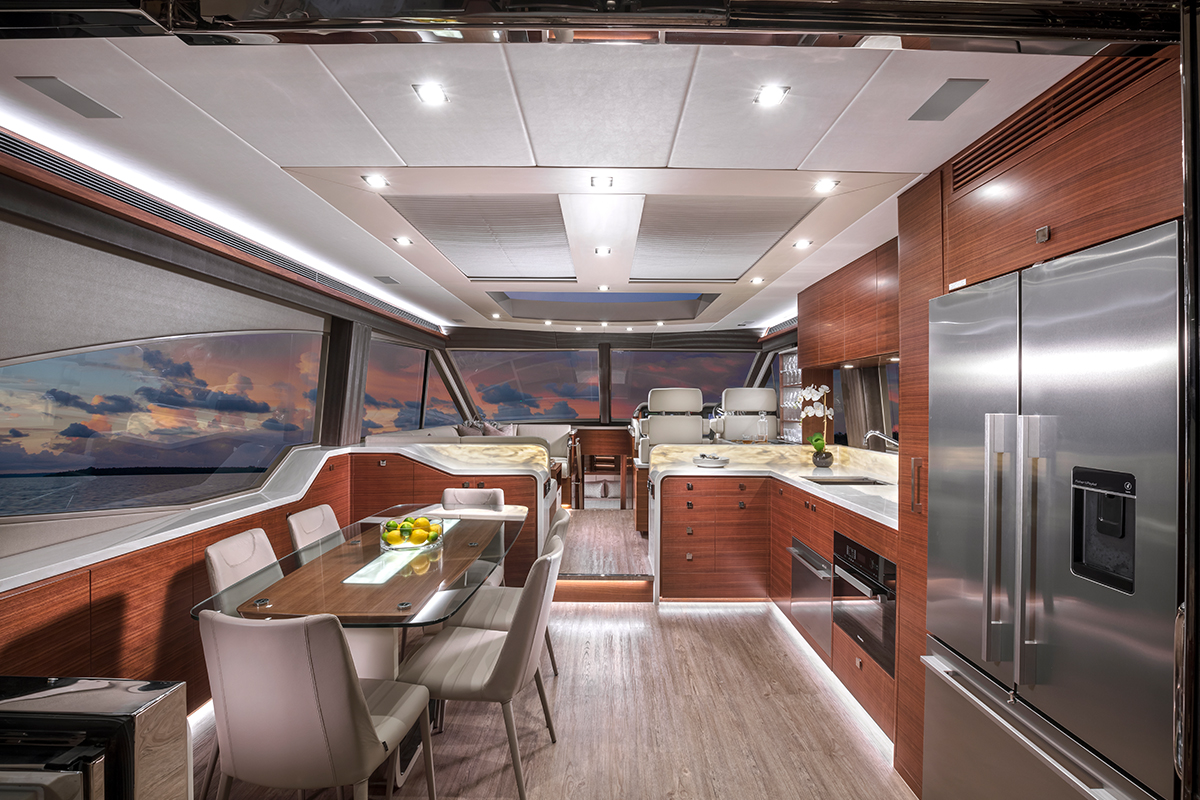 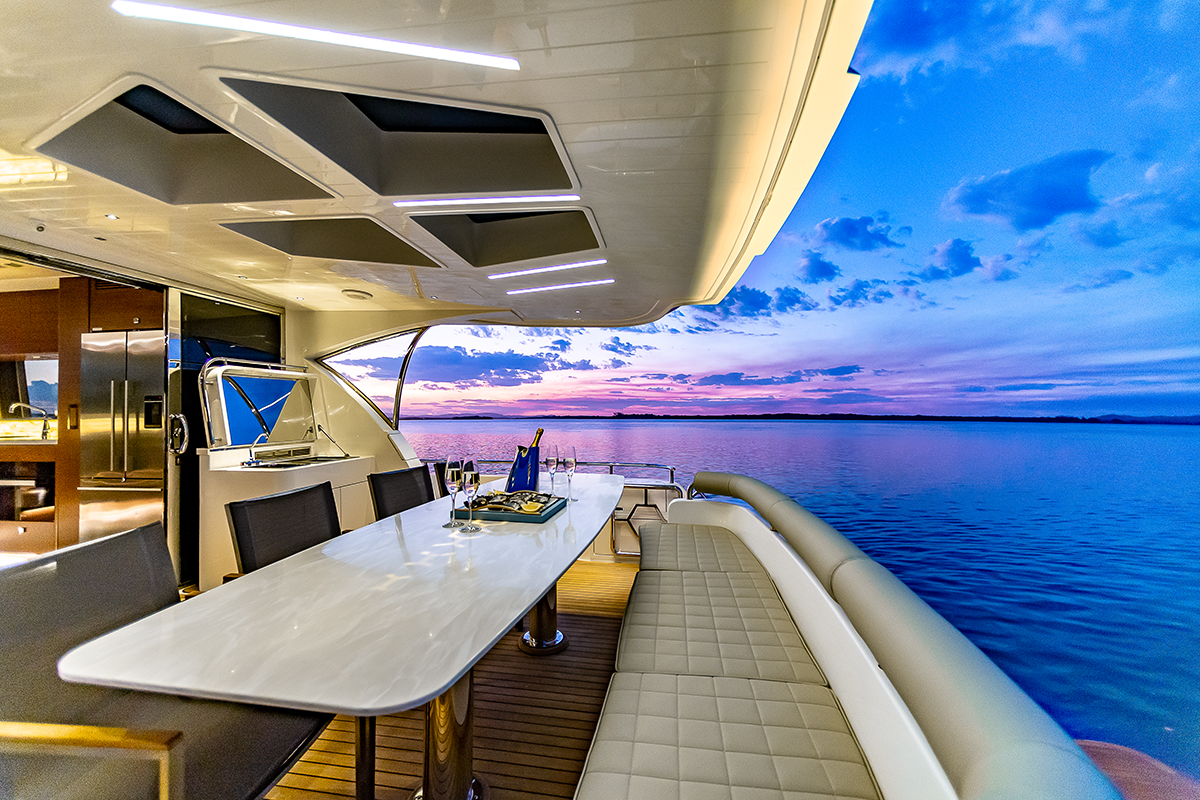 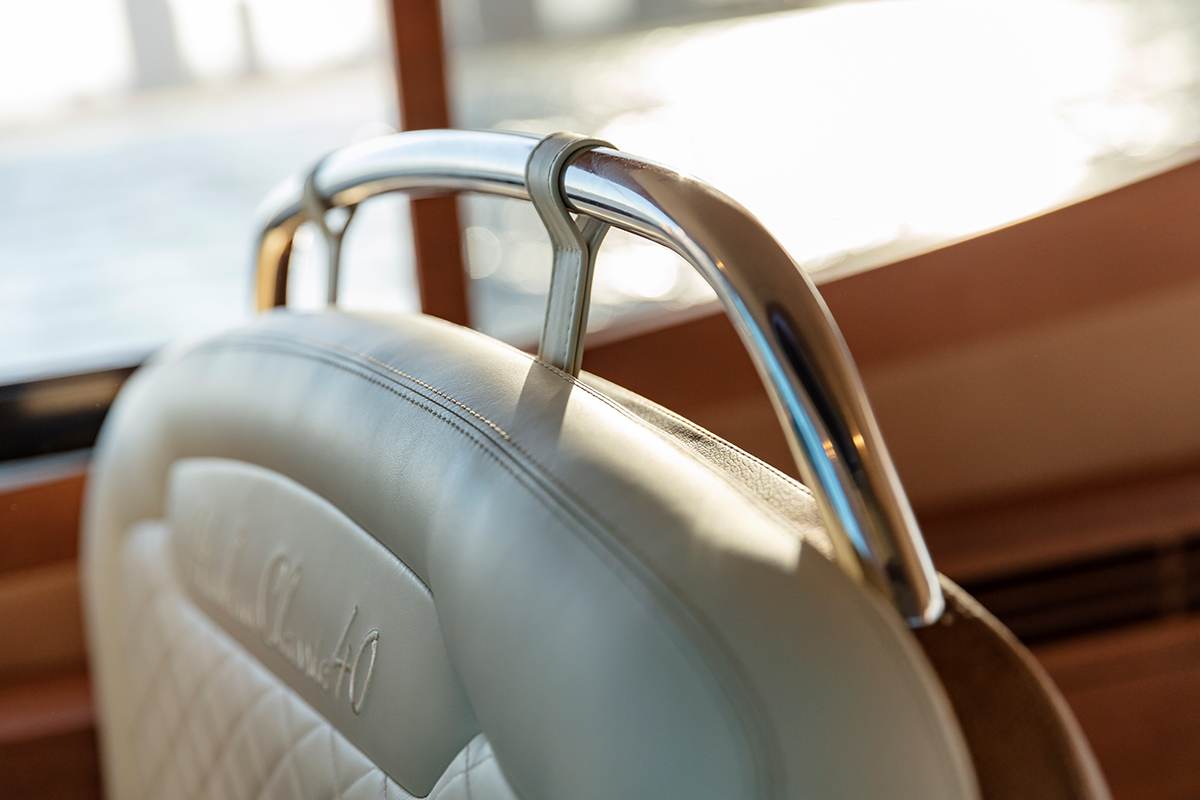 “They wanted a long roof and with a long roof it’s hard to make it look nice,” he says. “Your eyes keep going up. I put in the mast to draw your eye – it makes sense like a Christmas tree as your eyes go from the bottom to the top.

“We put in skylights because we put in so much effort into the mast, now we have a reason to look at it. Everything seems to converge.”

From the tailored table, which has a glass edge to make it appear smaller without sacrificing its physical size, to the customisable bolster that can be manoeuvered to suit any driver, the attention to detail creates ultimate luxury.

“I put in the mast to draw your eye – it makes sense like a Christmas tree as your eyes go from the bottom to the top,” – Misha Merzliakov

“A lot of ergonomics went into this,” Merzliakov says. “For previous boats in the category – the steering wheel is never above your knee, like in a car.

“There is a button to bring you closer, then you can raise the steering wheel up with its 36-degree tilting. If you’re standing it can be vertical.

“You could spend a great deal of time here. We put a bit more effort in a few areas because no two bodies are the same.” 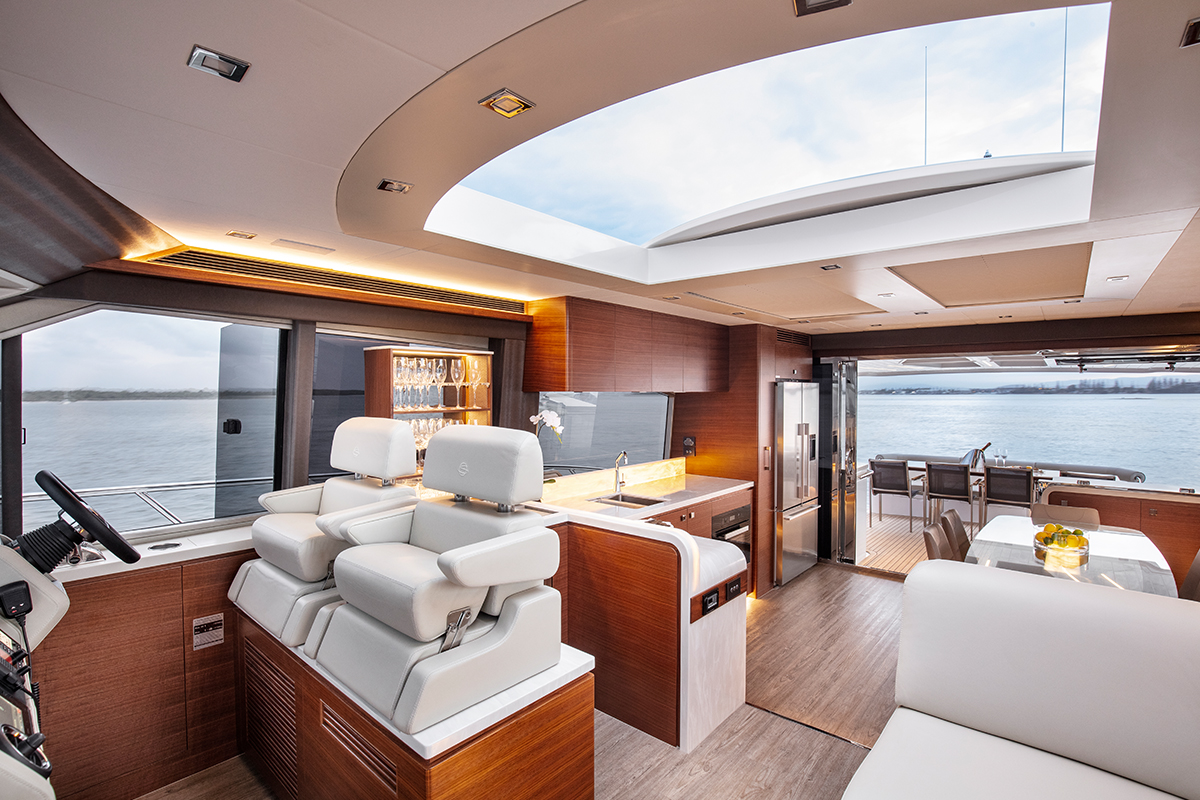 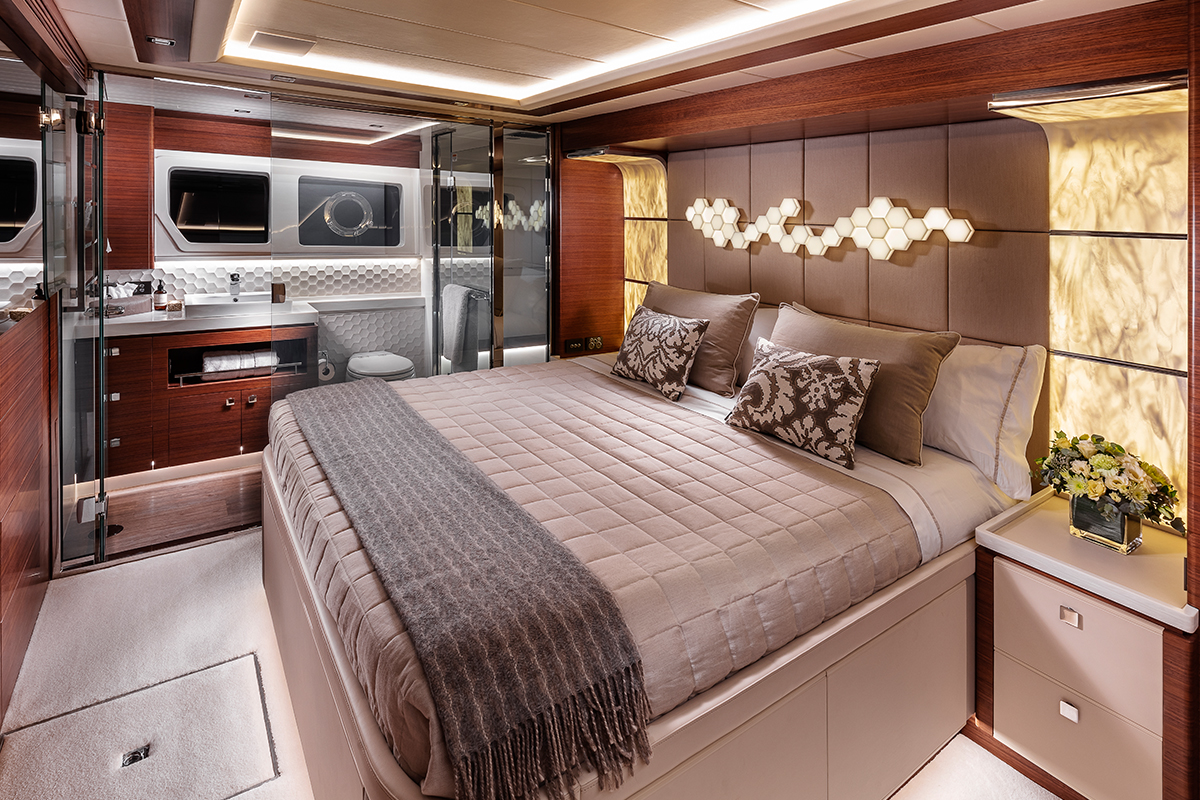 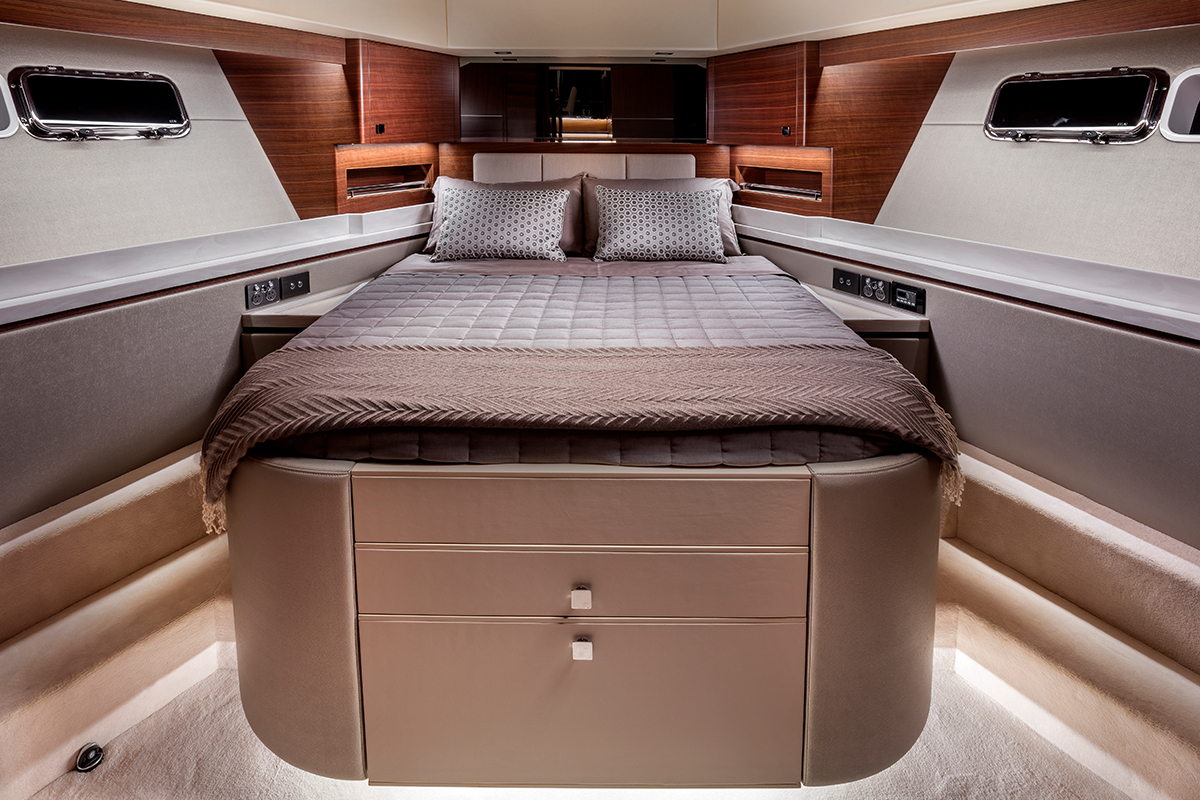 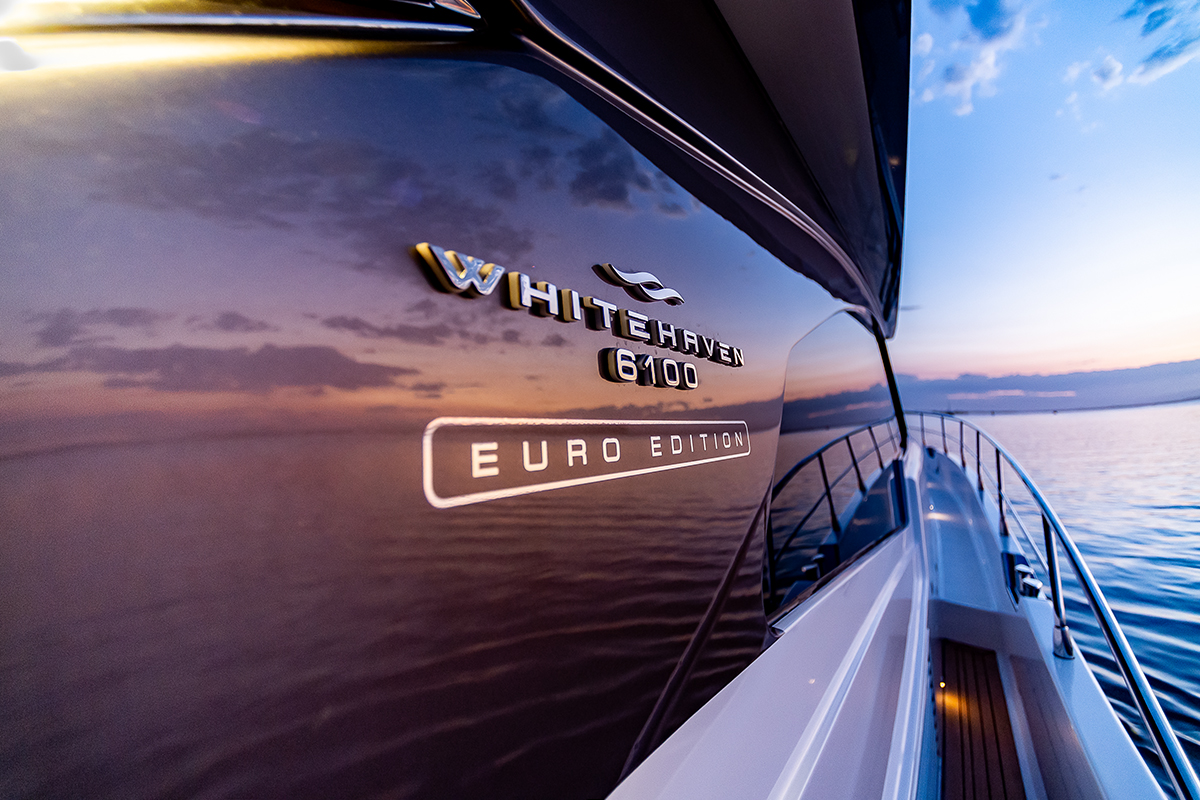 Louis Vuitton wardrobes with jewellery box lining, Italian leather, electric reclining day bed, foldaway television, ambient lighting, handbag holders, bedside wireless charging platforms, Spanish tiles throughout the bathroom and panelled walls – so if one tile cracks, the whole wall doesn’t have to be replaced – are just a few of the indulgent features of the Coupé 6100 (which has been shortlisted for the International Yacht & Aviation Awards 2019).

Merzliakov explained it’s the tiniest, thoughtful yet practical details that make all the difference.

“You and your partner are in bed and you don’t want to wake your partner, but you want to get into the bedside drawer, but the lights are off,” he says. “There’s a light in the drawer, they’re soft latches so you can’t hear them and then it’s a soft close.”

While the opulent master ensuite features beautiful Spanish hexagon tiles with a light running through it to create a sensual oasis, the glass wall separating it from the sprawling bedroom can be blacked out with a frost effect at the touch of a button – creating ultimate privacy with effective switch glass.

“Some of the Bentley picnic accessories you can see – the upholstery, the straps with a bit more detail; it’s a bit more intricate, a bit more luxurious,” – Merzliakov

But the star of the show is the dramatic A$5,000 Corian light crowning the master bedhead like a piece of golden honeycomb. The creation was 3D modelled, individually cut and assembled with a light panel behind it, negating the need for downlights.

The ultimate 62-foot (18.8-metre), all-weather luxury entertainer may be a beautiful ocean beast equipped with 1,000 horsepower but for a cheeky after-work boat ride, the Harbour Classic has you covered. 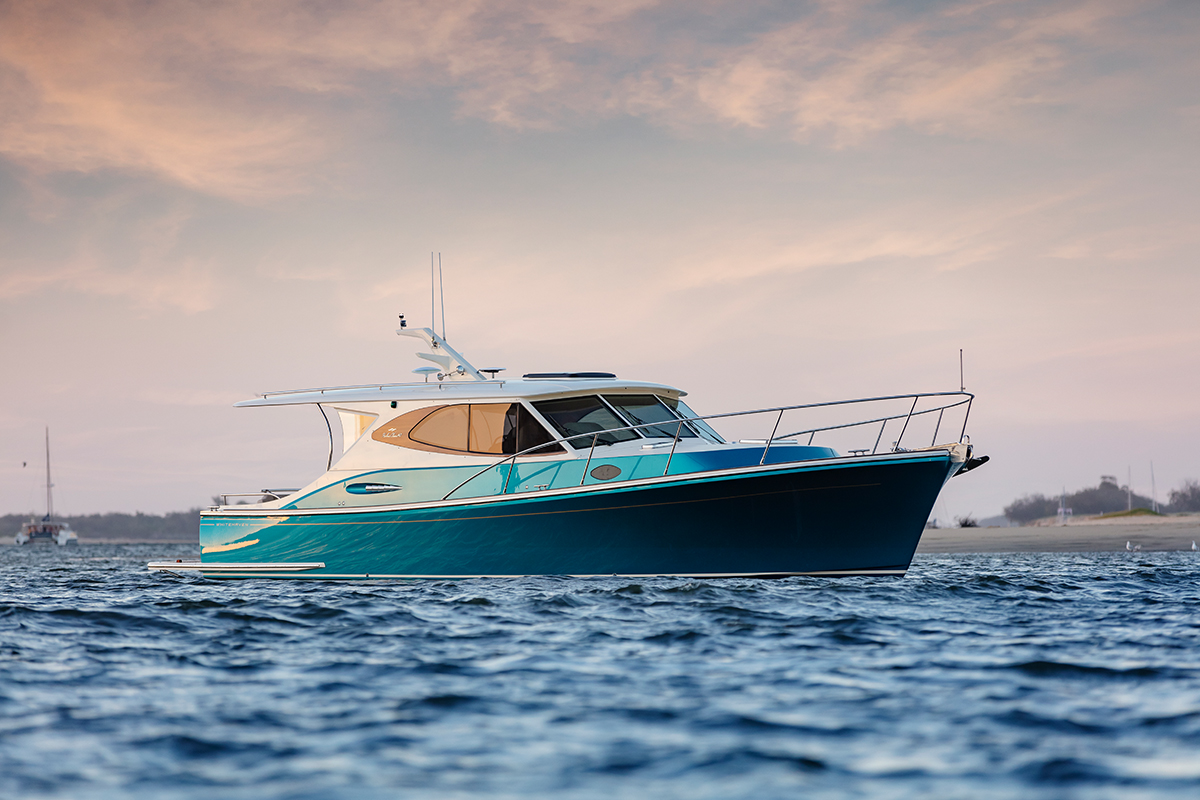 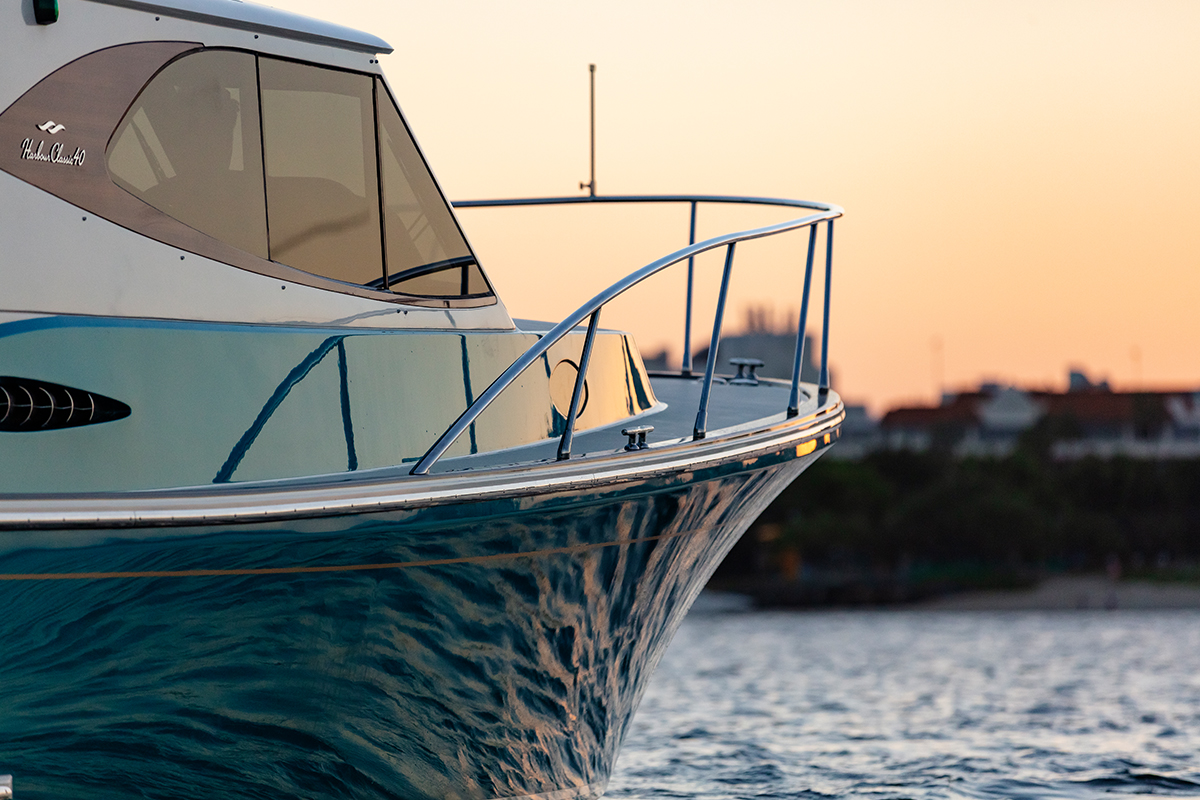 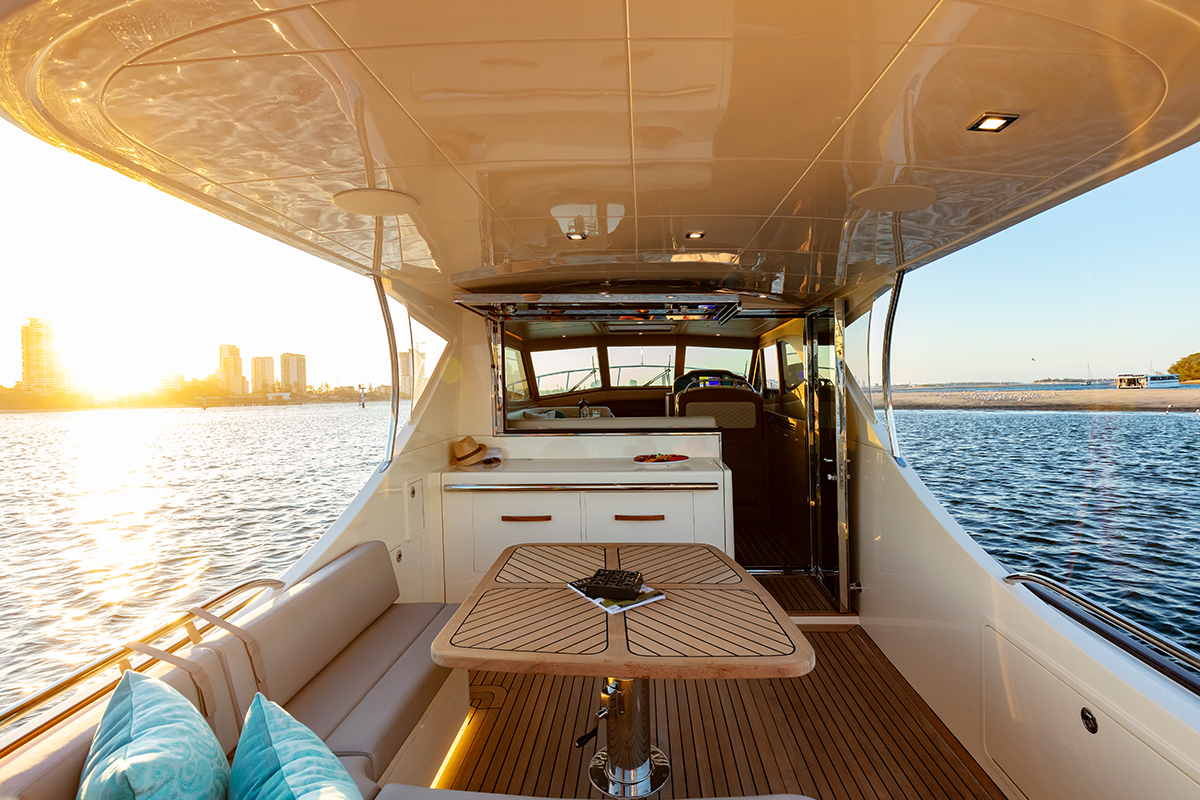 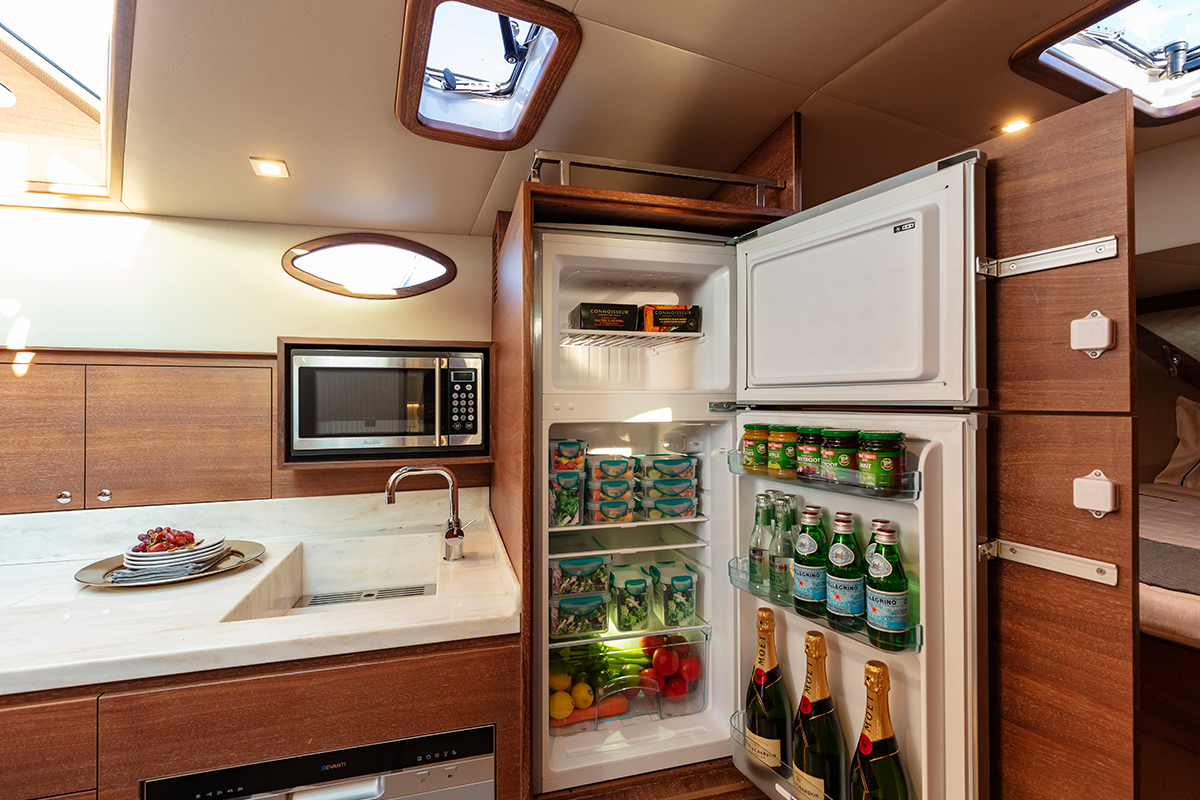 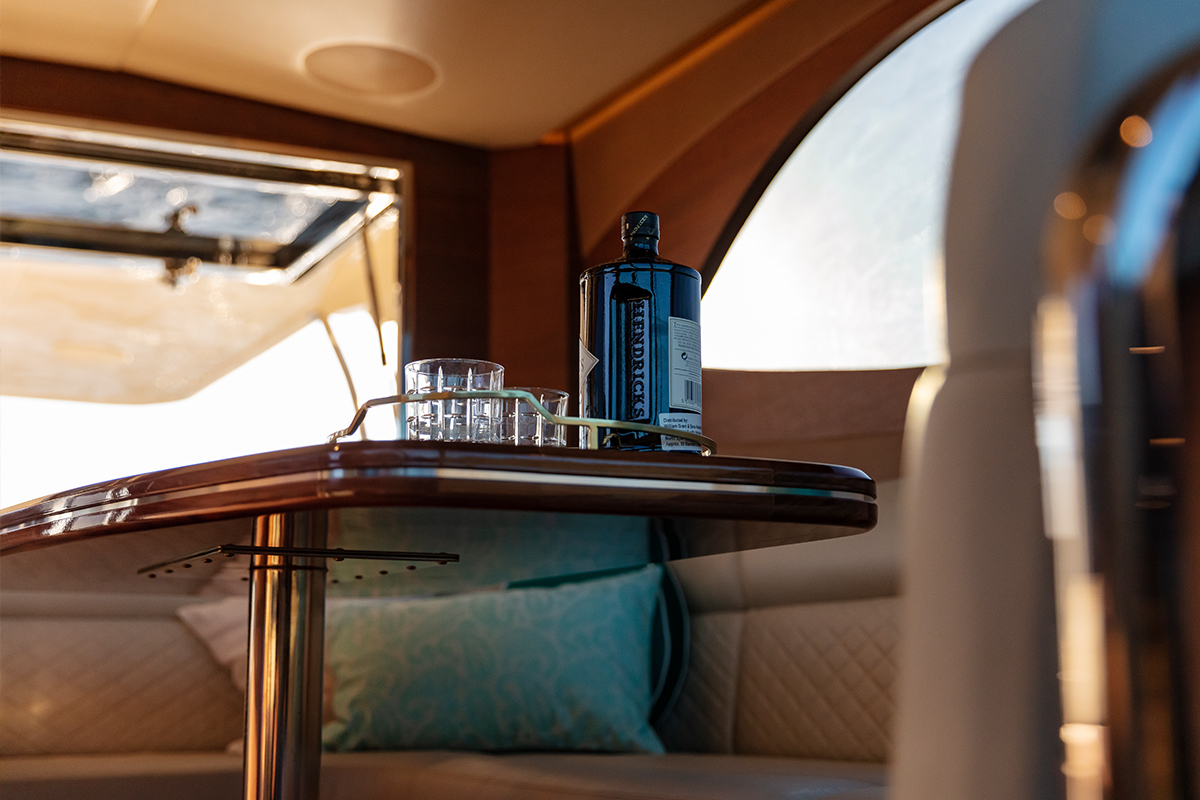 Dubbed the ‘Sunday drive’ of luxury motor yachts, the Harbour Classic features gracious lines and divine detailing as she caters to spontaneous occasions with entertaining at her core.

Offering all the mod cons of boutique apartment living, onboard conversation flows from the cockpit through to the saloon and galley while you jaunt to your favourite sunset spot.

Merzliakov found inspiration with heritage lobster boats, bringing it in line with the Whitehaven luxury offering.

“What I got was a lovely feature line,” Merzliakov says. “It draws the eye up and makes it look sportier.”

The Queensland-based designer included a long roof to provide relief from scorching Australian summers, while featuring timber at the sides.

“It’s like older cars that had wooden trim on the insides in the 1940s and 1950s – even on an old Bentley in the 1920s – you saw these licks of timber. That was the inspiration behind this,” he says. “Some of the Bentley picnic accessories you can see – the upholstery, the straps with a bit more detail; it’s a bit more intricate, a bit more luxurious.

“Handbags were the inspiration for those straps.” 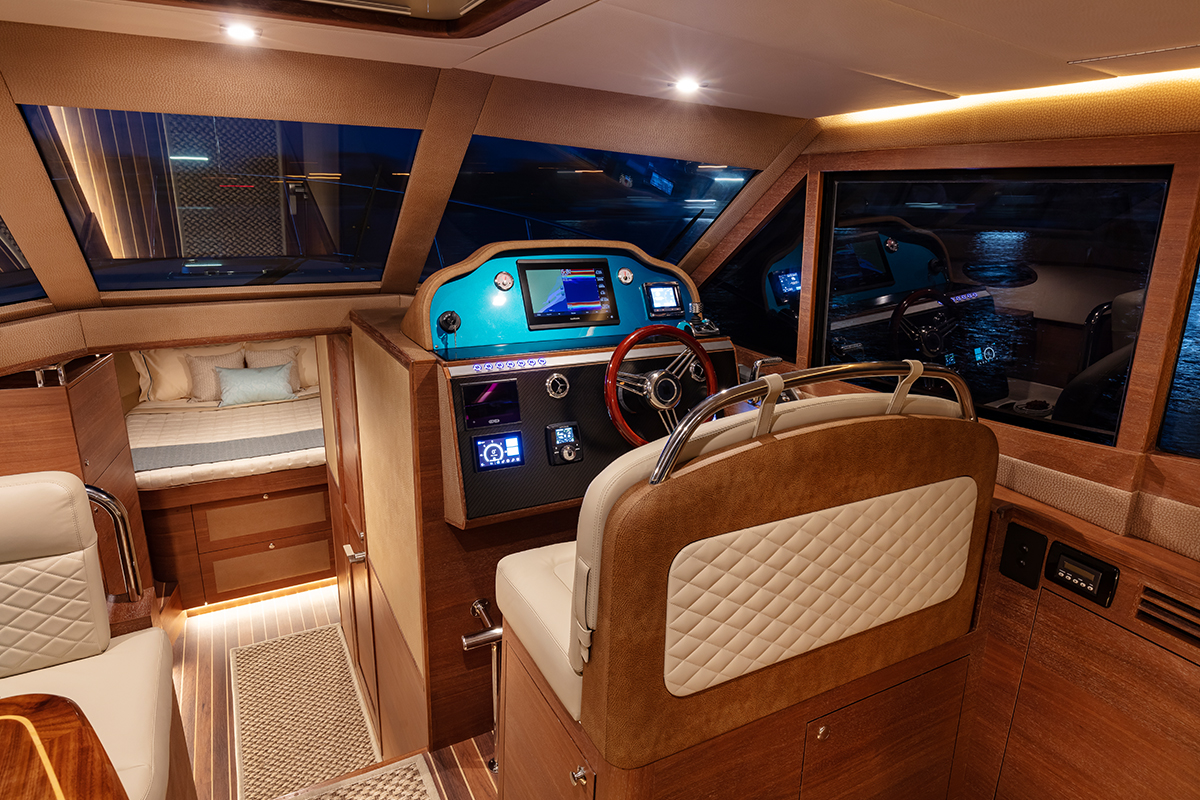 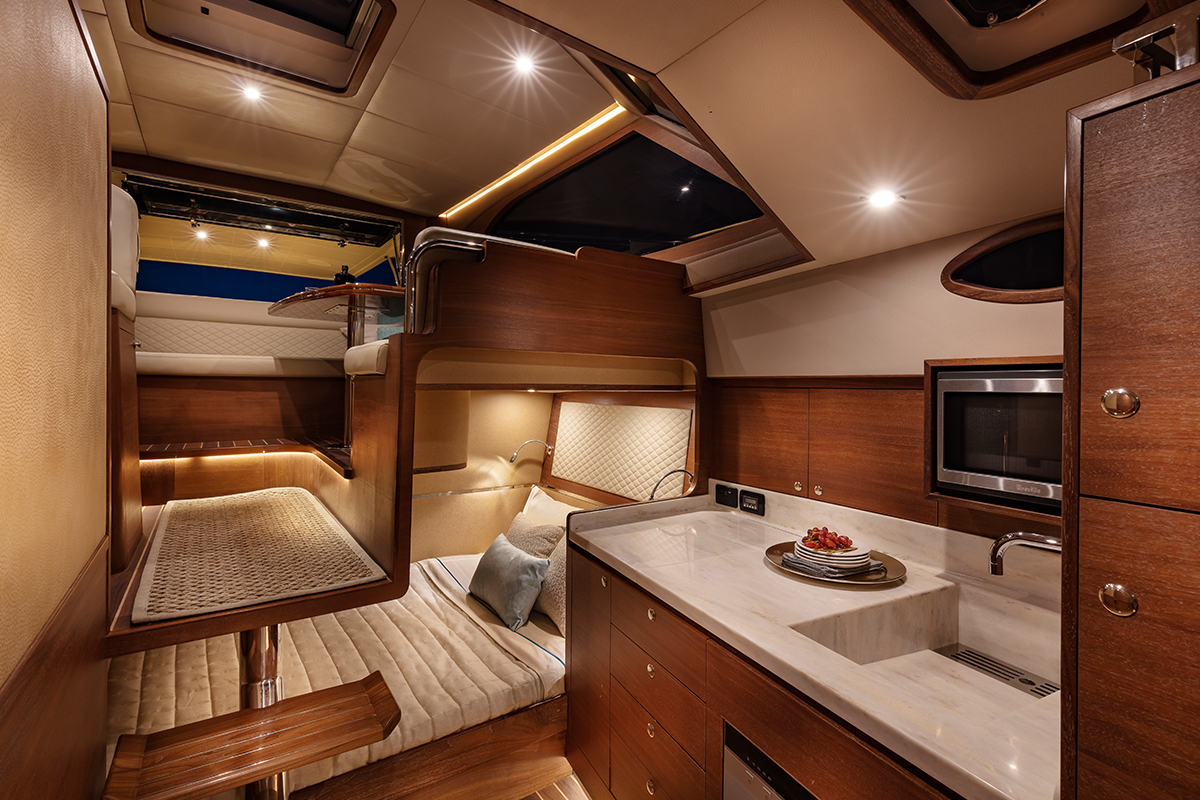 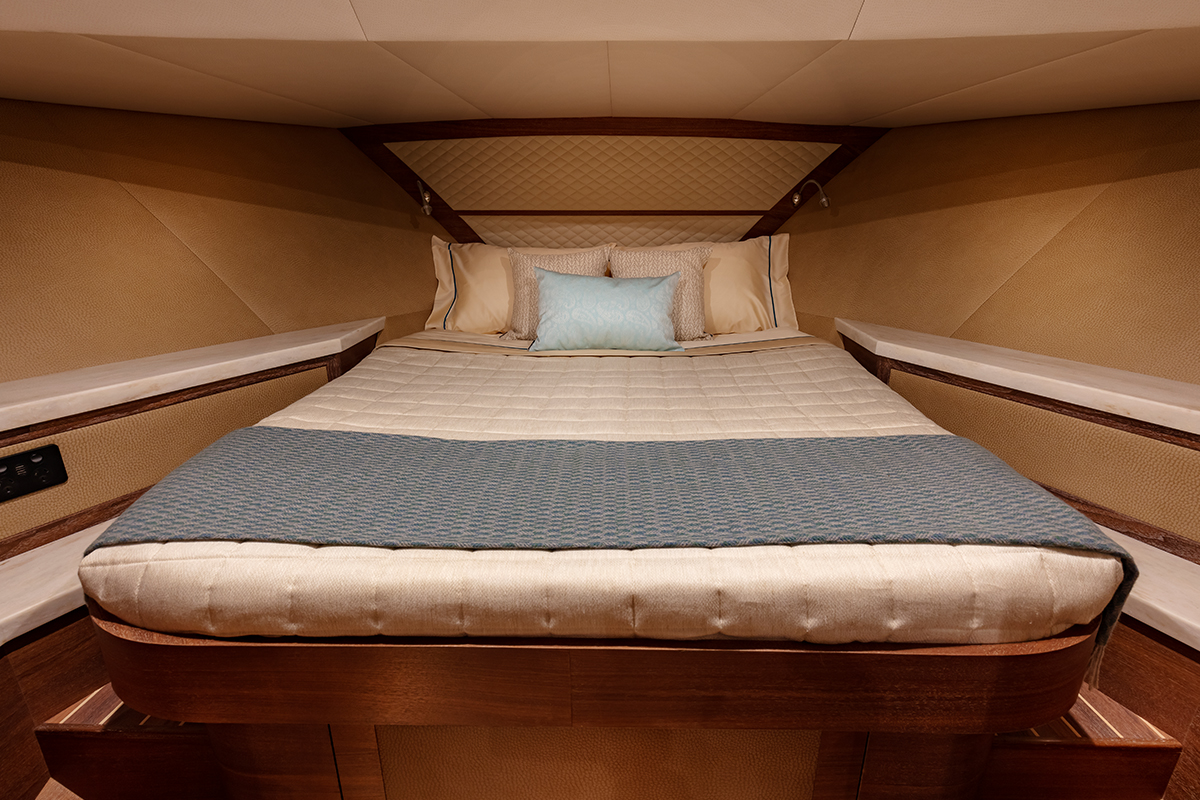 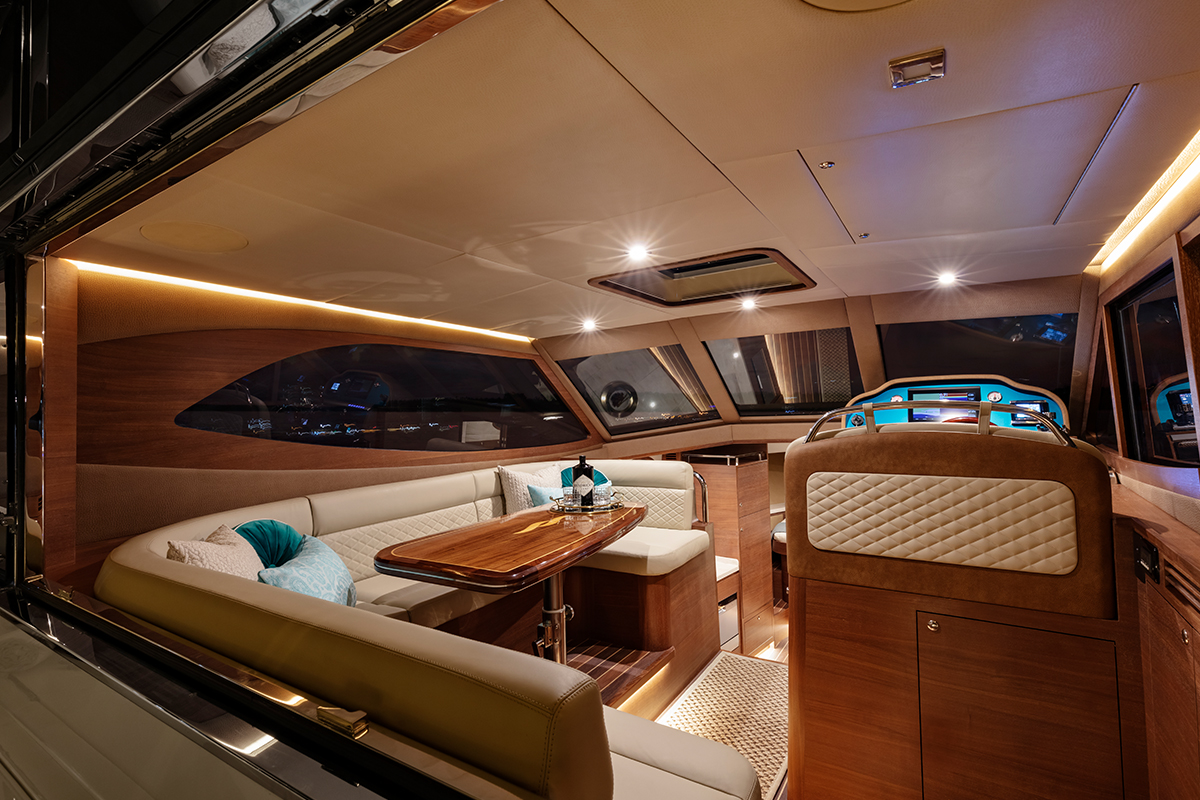 Boasting two beds, two fridges, a below-deck engine room, two-mode table that can phase into a dining or cocktail table, Corian benches and icemaker, the 40-foot (12-metre) dayboat combines the timeless appearance of a bygone-era cruiser with stylish design and high-tech engineering.

Promising a calmer pace of boating, the Harbour Classic was that and much more.

Boating under the Sydney Harbour Bridge and by the Sydney Opera House was as gentle as ever despite the rocky wash from the peak-hour rush of passing ferries – a special mechanism underdeck ignored choppy waters and allowed for The CEO Magazine to enjoy a pleasant afternoon cruise.

From enjoying the sea breeze ruffling your hair, relaxing in the lush interiors – nominated for design awards in Asia – to the thoughtful extra touches, the only negative is stepping back on dry land.