Ground has yet to be broken on a new development on the Red Sea coast, but that hasn’t stopped AMAALA already being dubbed the Riviera of the Middle East. 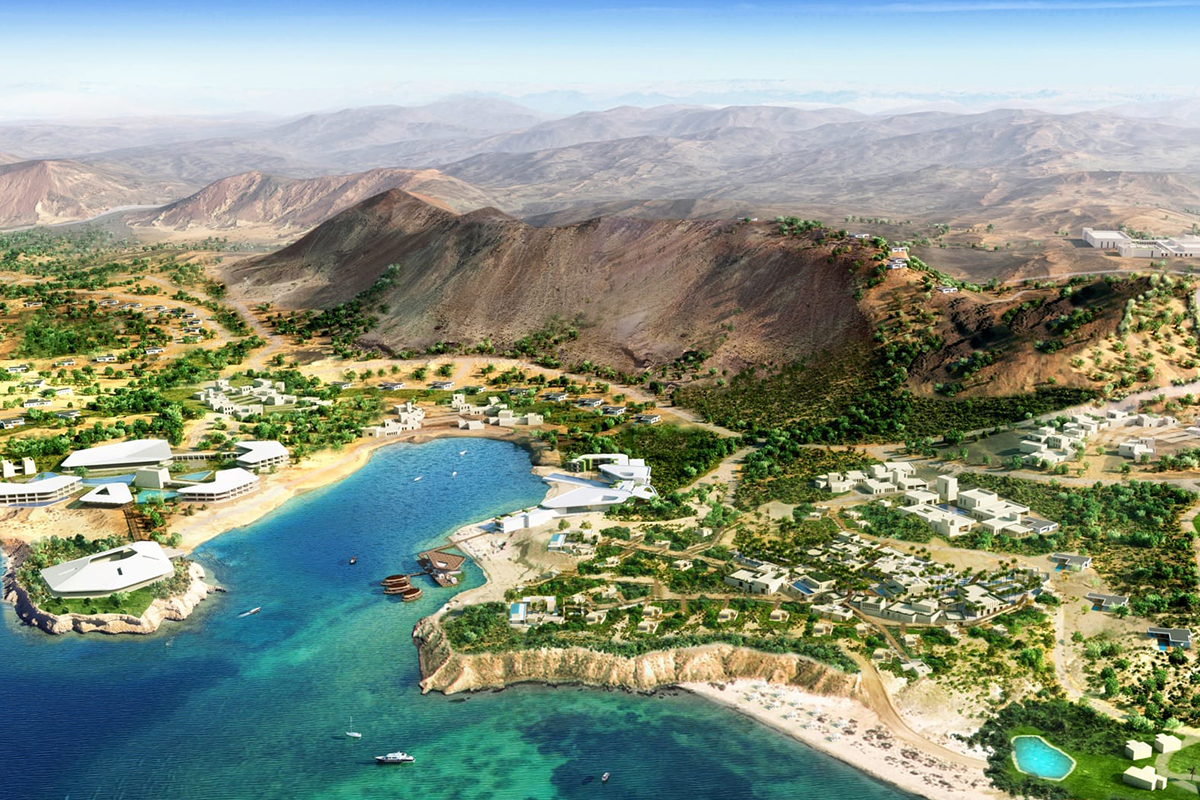 On a pristine strip of Red Sea coast, where barren mountains tumble into a pure, turquoise sea and the only trace of human settlement is a low-lying coastguard shack, ground is preparing to be broken on a luxury wellness development due to open partially by 2023.

Christened AMAALA, the Arabic word for hope, the project has been designed to rival traditional UHNWI hotspots such as Porto Cervo, Porto Montenegro, Saint-Tropez and St Barts. “We have pretty much benchmarked every high-end destination in the world and have mapped ourselves against all of the offerings,” CEO Nicholas Naples explains as he talks to The CEO Magazine at September’s Monaco Yacht Show – a presence that serves as a statement of intent in itself. “An extraordinary effort has gone into thinking through exactly what we bring to AMAALA, because we can’t bring everything. We’ve been very selective.”

Saudi Arabia may not be the first country that comes to mind when you think of the jetset lifestyle – or tourism in general, in fact. But, at the same time as Nicholas’ visit to the Mediterranean principality, the Kingdom catapulted itself to the top of travel headlines with news that, for the first time in history, it is to issue tourist visas to nationals of 49 countries.

Part of the Crown Prince HRH Mohammed bin Salman bin Abdulaziz Al-Saud’s larger strategy – commonly known as Saudi Vision 2030 – to diversify the economy away from oil, the once-closed nation is using ancient wonders, such as the Nabatean caravan city Mada’in Saleh, and future developments, including Qiddiya, an entertainment super-city on the outskirts of Riyadh, to lure visitors to its land. 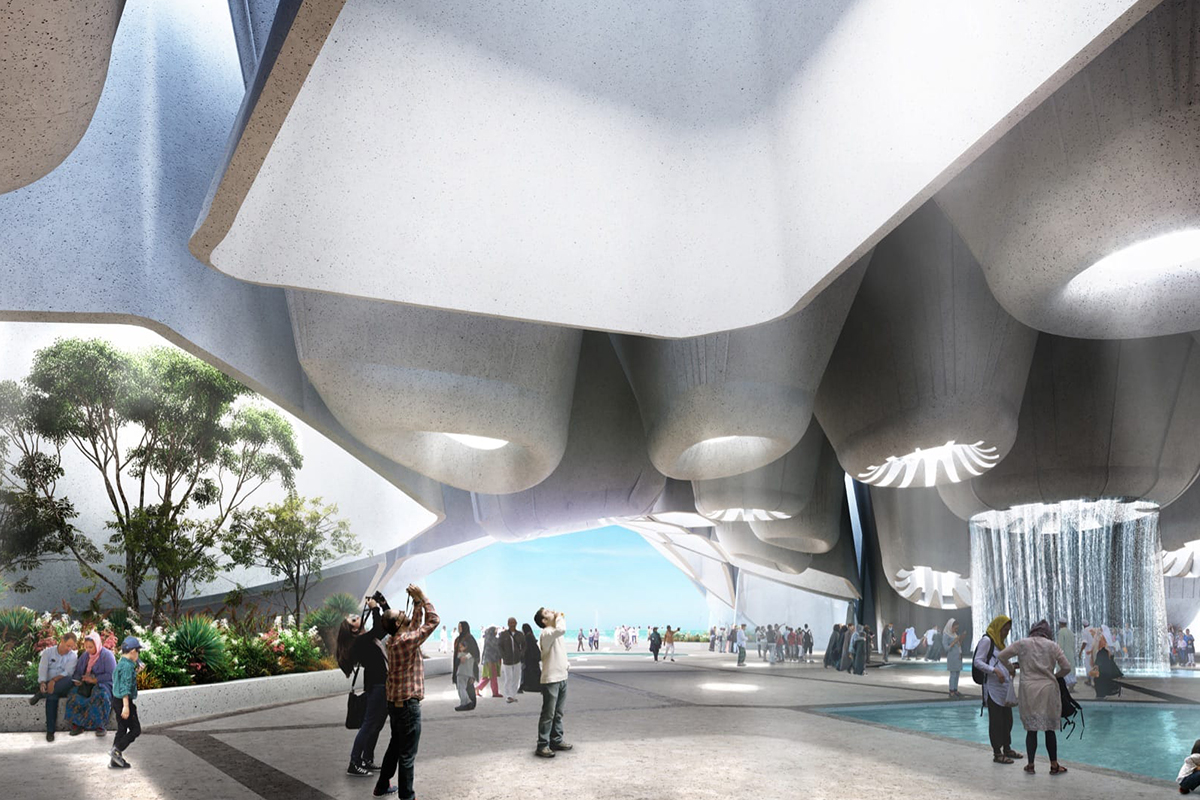 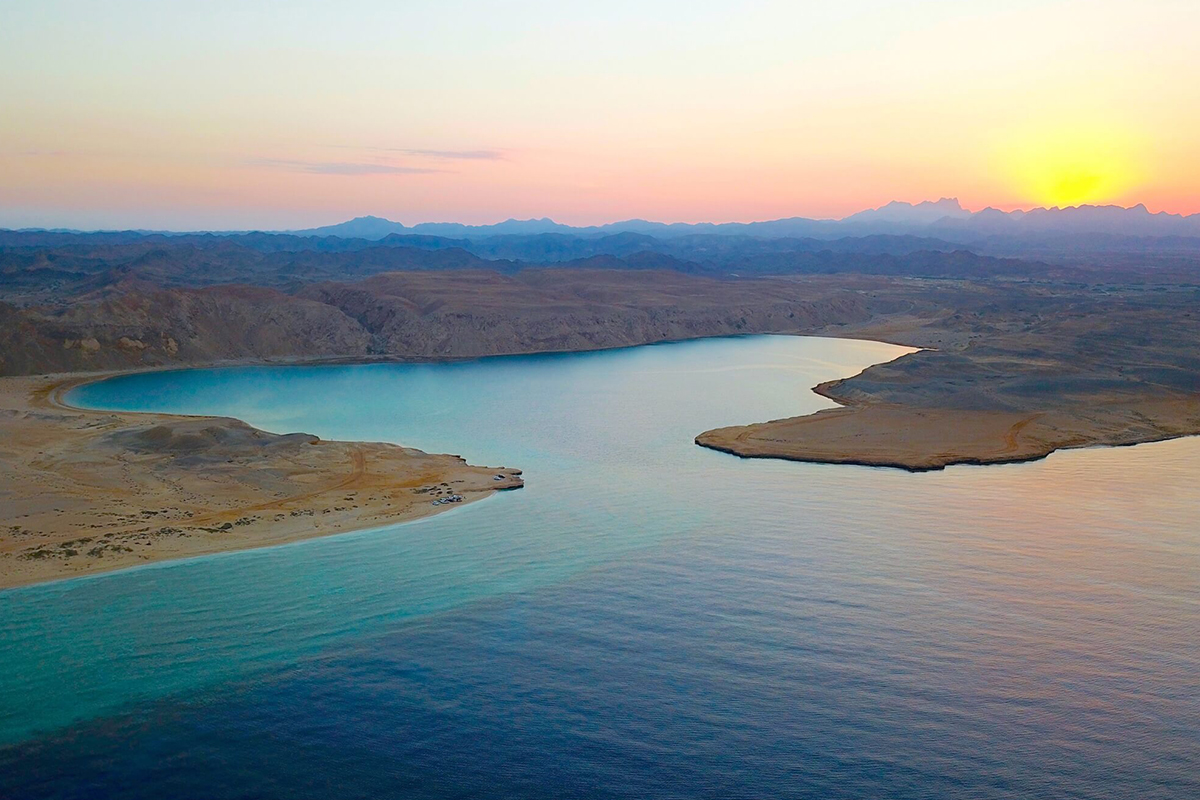 On a site long-favoured by the Crown Prince for the quality of its coral, AMAALA is destined to be the jewel in the crown. Across 3,800 square kilometres, three separate communities are set for construction, including one on an island. Once completed, there will be over 800 villas and more than 2,500 hotel rooms, along with high-end boutiques, fine-dining restaurants, health and wellness facilities, art installations and superyacht berths.

The master architect has recently been revealed as Jean-Michel Gathy, the name behind favourite A-list haunts like The Chedi Muscat, The Setai in Miami, One&Only Reethi Rah in the Maldives and Park Hyatt Sanya Sunny Bay Resort on China’s Hainan Island. Unsurprisingly, the development has already been dubbed the Riviera of the Middle East.

“When we decided that we needed one of the projects in the Kingdom to be ultra-premium, the question then became where would we locate it,” continues Nicholas, an American who has spent his career spearheading some of the largest hospitality groups in the world.

“We chose this site because it will be a light-touch development; low density, high quality, really bespoke in terms of the offerings.”

Of all the resort settings he has ever visited, he says this location is the most unique.

AMAALA is more than a destination

AMAALA has been designed as a place for transformative, personal journeys curated around three pillars: wellbeing and sport, arts and culture, and sun, sea and lifestyle.

There’s Triple Bay. “This is home to what we consider to be the most comprehensive wellness offering ever created in one destination,” Nicholas explains. “There will be integrated, aesthetic and medical wellness, as well as Chinese medicine and Ayurvedic treatments. We’re bringing the best in class of all these different wellness modalities under one roof.” The location to exercise both mind and body, other facilities include a sports performance academy, as well as camel racing, falconry, golf, tennis and an equestrian centre.

Further north, The Coastal Development is the arts and cultural epicentre with an avant-garde, over-water, cultural centre at its core. “Here will be like an upscale South Beach,” Nicholas enthuses. “All set against a beautiful coral reef that is living and perfectly pristine,” he continues. 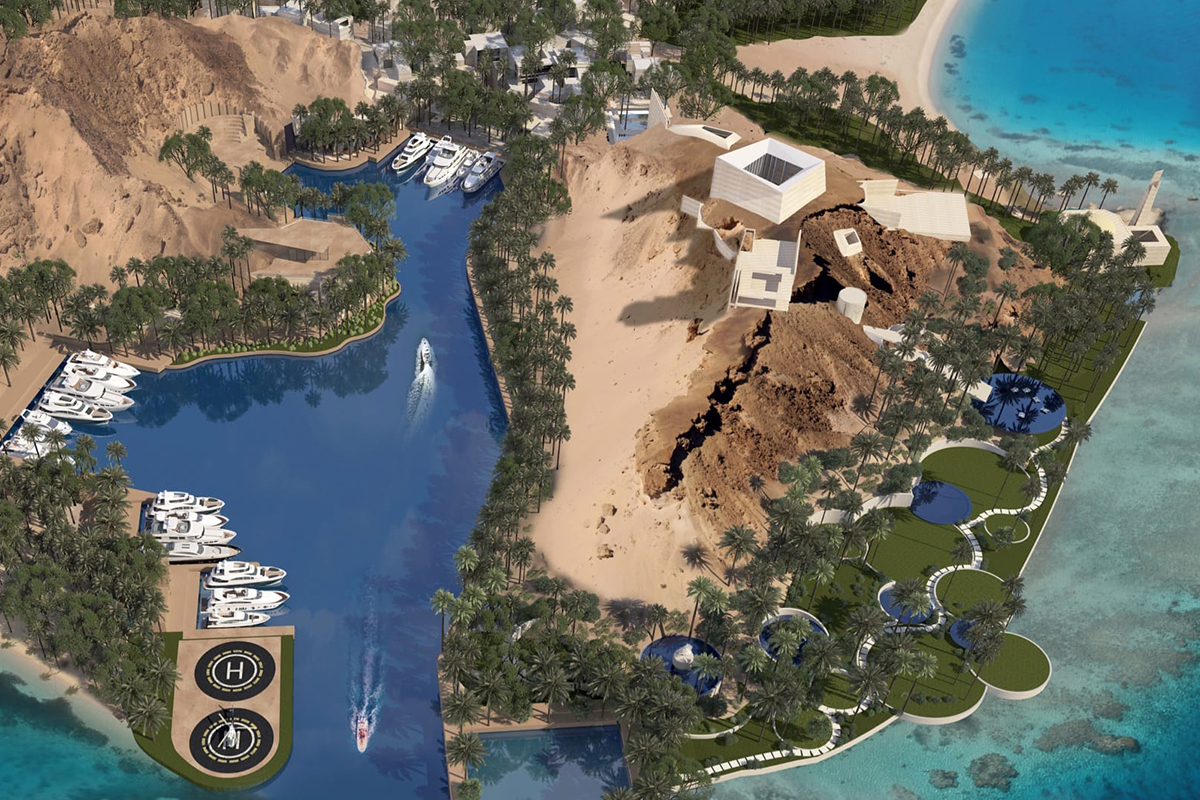 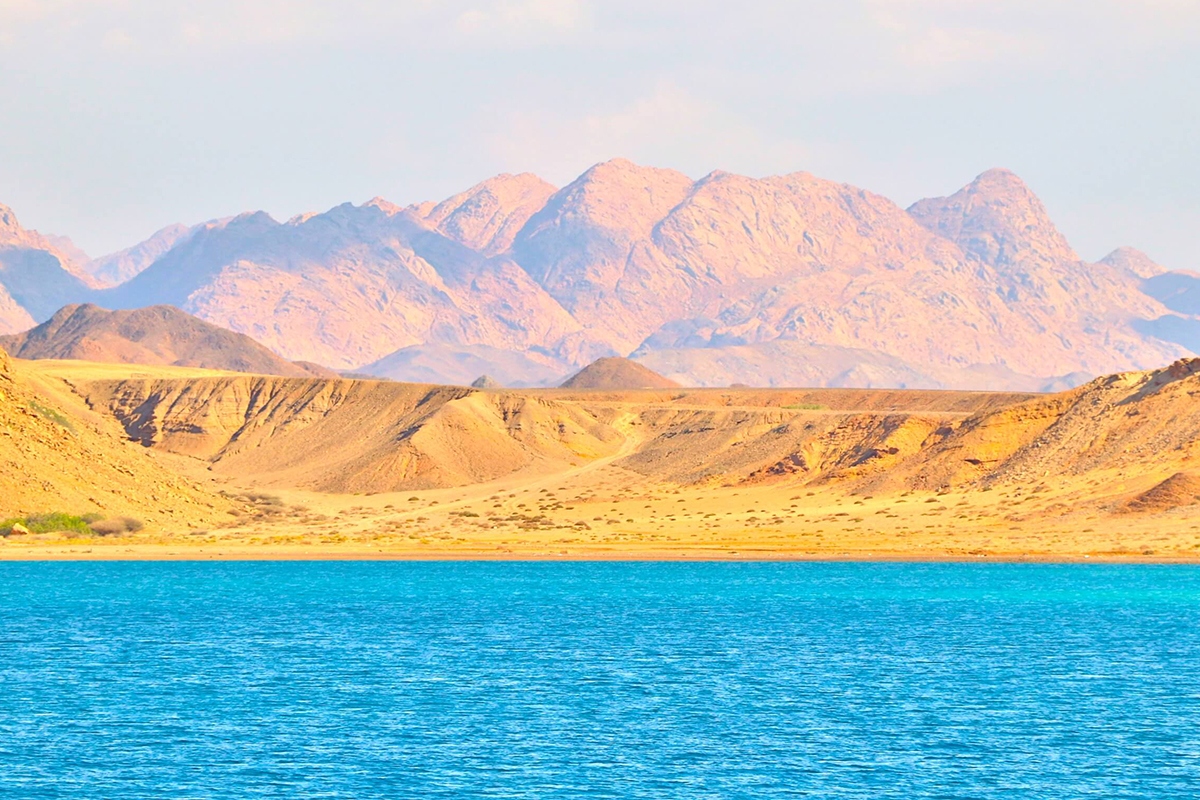 The Island has been conceived as the ultra-exclusive enclave with waterfront villas set on one-and-a-half-hectare plots, an artists’ village and elegant Arabic botanical gardens. Like the coastal community on the mainland, art is also a major theme here on this seven-kilometre slither of sand – with one difference. “Part of the arts world is very bespoke, very high end and curated. Those are the types of exhibits The Island will host,” he explains.

With a mix of residential properties and hotels – and a more comfortable climate than that of the country’s desert interior – AMAALA will be home to a permanent community, served by an international airport currently in construction. Mumbai, Moscow, Paris and London are all within six-and-a-half-hours reach, while Riyadh is two hours away.

Nicholas, who is in Monaco to announce a partnership with the Prince Albert II of Monaco Foundation, The Centre Scientifique de Monaco and L’Institut Océanographique de Monaco (Oceanographic Institute), explains that, together, Saudi and Monégasque marine scientists will collaborate on a variety of research and conservation initiatives including the protection of the biodiversity of the Red Sea. The undisturbed nature of the area, Nicholas says, makes it “top of mind for anybody interested in the world’s oceans”. Plans have been drawn up for a Marine Life Research Institute in Triple Bay.

Given HSH Prince Albert II knows a thing or two about fostering sustainability without sacrificing glamour (he is transforming the principality into a beacon of environmentally friendly living), the partnership was what he calls “a natural fit”. Sustainability is the bedrock of the entire AMAALA development – from the first foundations through to everyday living once the first residents and visitors are welcomed. “With such an untouched site, we can build something up with a zero-carbon footprint,” he continues. Landfill and land reclamation is out, as is anything that impacts the delicate coral reef. Solar energy farms, desalination, biodegradable plastics and sustainable farming techniques are in.

We’re still a decade away from AMAALA’s total completion but, if early interest is anything to go by, Saudi Arabia’s Red Sea coast is set to be a new jetset hotspot.