Sydney’s famous firework display hurtling down from the Harbour Bridge and a majestic pyrotechnic show in golden Abu Dhabi are just some of the incredible ways to kick off 2019. 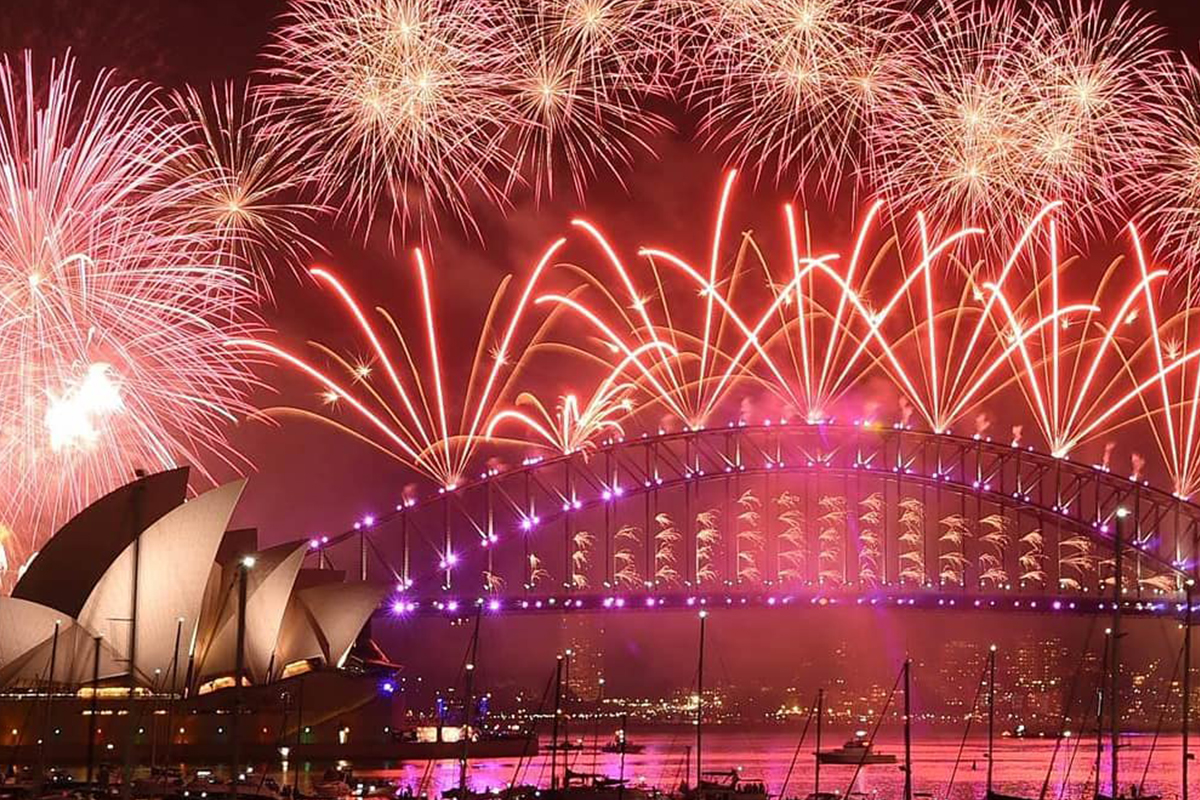 Whether you want to spend New Year’s Eve with snow all around or feel the explosive vibrations of fireworks booming across a city skyline, here are the best places in the world to kick off 2019.

As one of the first major cities to welcome the new year, the multimillion-dollar display of cracking fireworks hurtling off the Sydney Harbour Bridge and Opera House can’t be missed.

New Year’s Eve enthusiasts eager for an exciting start to 2019 in the heart of Sydney will be treated to an aerial display, dozens of illuminated ships sailing across the harbour and several bursts of twinkling fireworks. 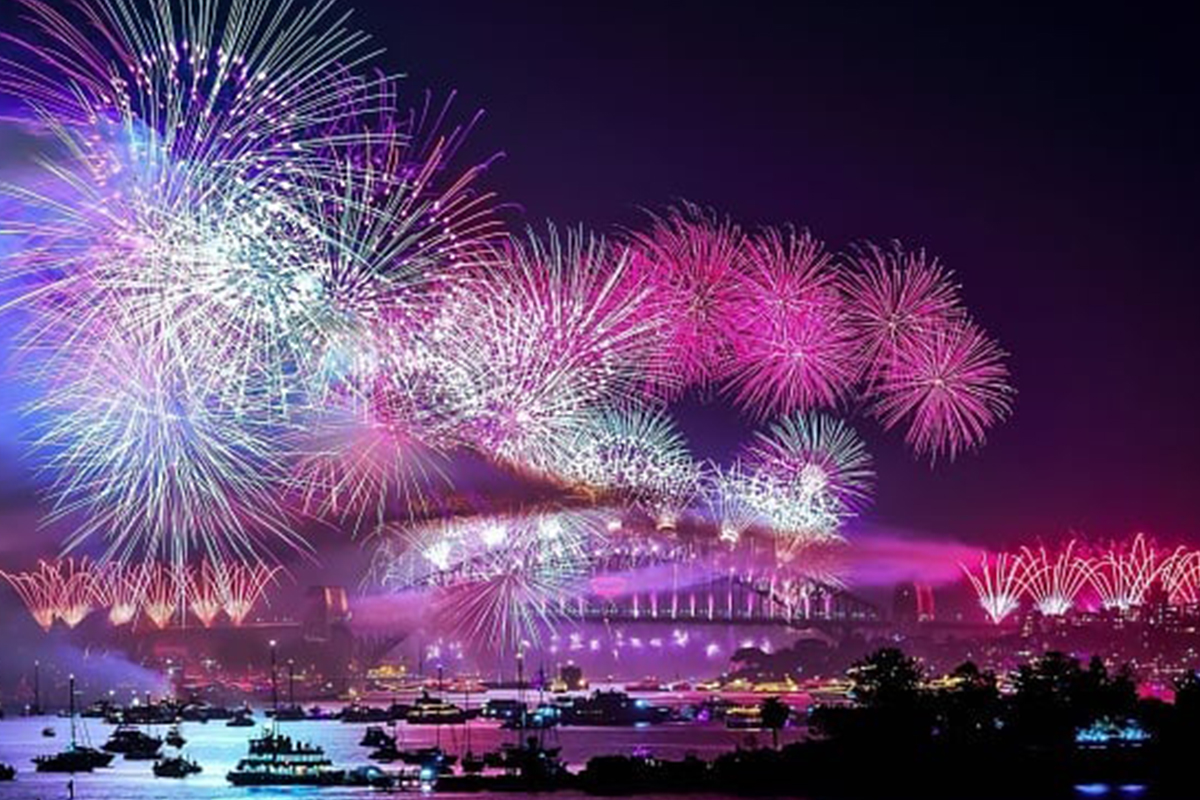 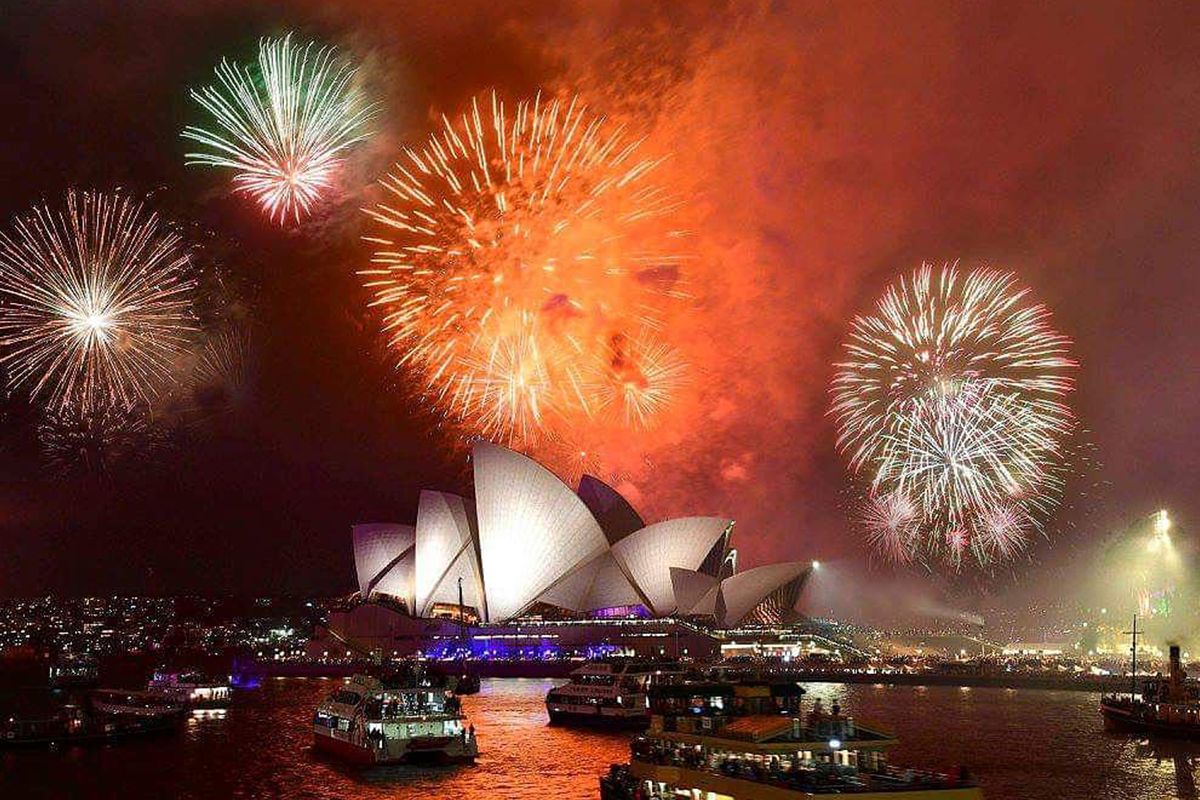 For those wanting to see in the Year of the Pig (although the Lunar Year officially starts in February) and celebrate all week long, then Hong Kong is the place to be.

The city’s famous skyline is lit up by a dramatic 1.1-kilometre pyrotechnics display. The bustling Victoria Harbour features thousands of fireworks going off from the tops of dozens of iconic skyscrapers, accompanied by synchronised music and sound effects.

While the New Year’s Eve spectacular lasts about 10 minutes, festivities will continue through to the Chinese New Year in February. 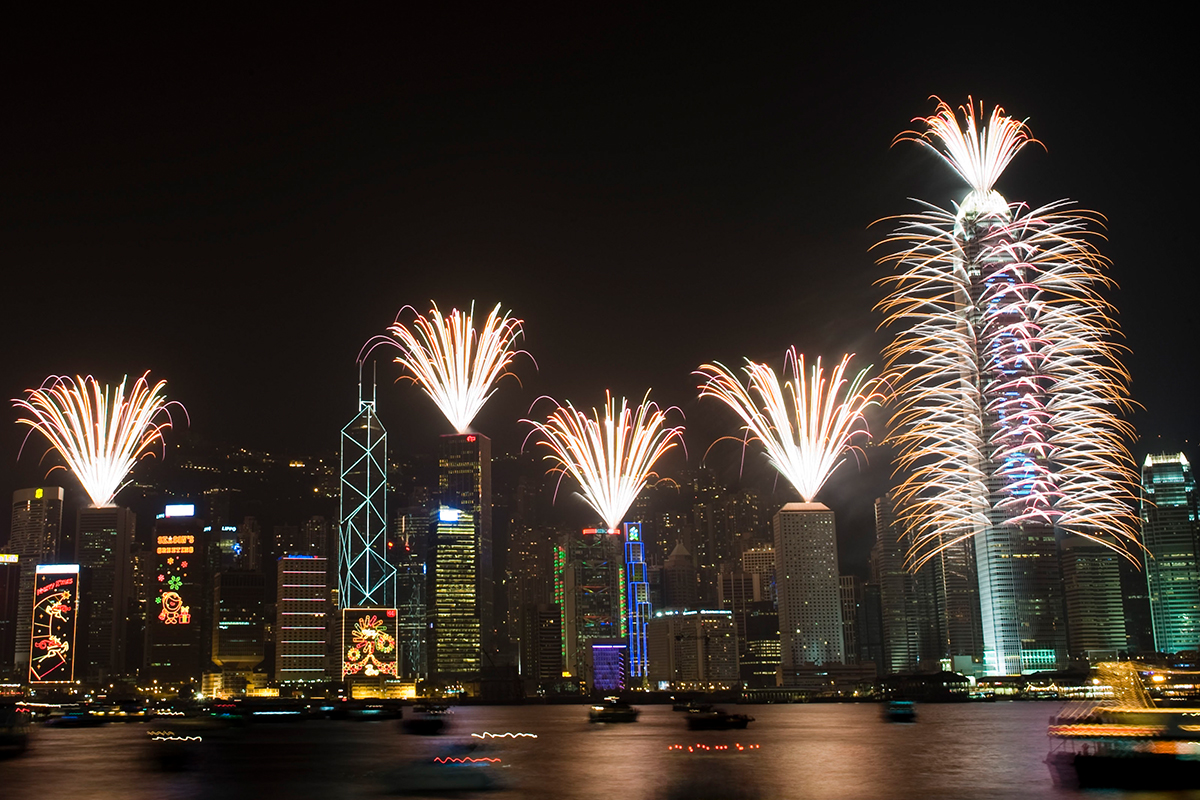 From lavish rooftop dinners with free-flowing champagne and exclusive views of the fireworks and family-friendly night markets to partying well into 2019 in iconic nightclubs, Thailand has every experience covered.

To spice up traditional fireworks displays, Bangkok offers live music, puppet shows and cabaret in Asiatique – regarded as one of the best places to welcome the new year in the city. Or if you’re after a unique experience, float along the majestic River of Kings in a rice barge with golden views of The Grand Palace. 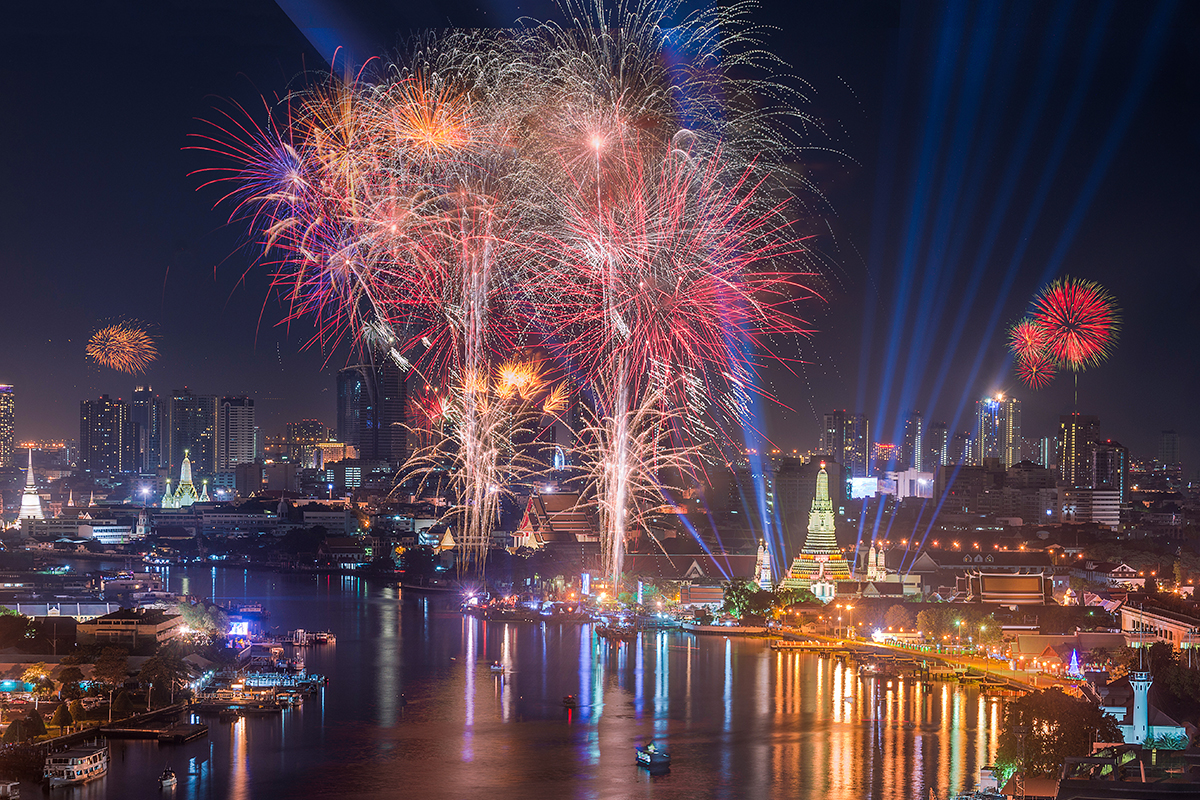 Water-music performances at the Dubai Fountain add a special touch to the seasonal fireworks lighting up the City of Gold.

The world’s tallest skyscraper Burj Khalifa is the spectacle to watch with tonnes of fireworks setting the city alight. Thousands of revellers gather at the footsteps of the iconic building and along the waterfront to catch a glimpse of the light and water show while others indulge in views of the Atlantis resort with its glittery display of fireworks.

Dubai certainly doesn’t do things by halves. In 2014, it broke the Guinness World Record for the World’s Biggest Pyrotechnics Display with 500,000 fireworks lasting six minutes across 400 locations costing US$6 million (A$8.1 million). 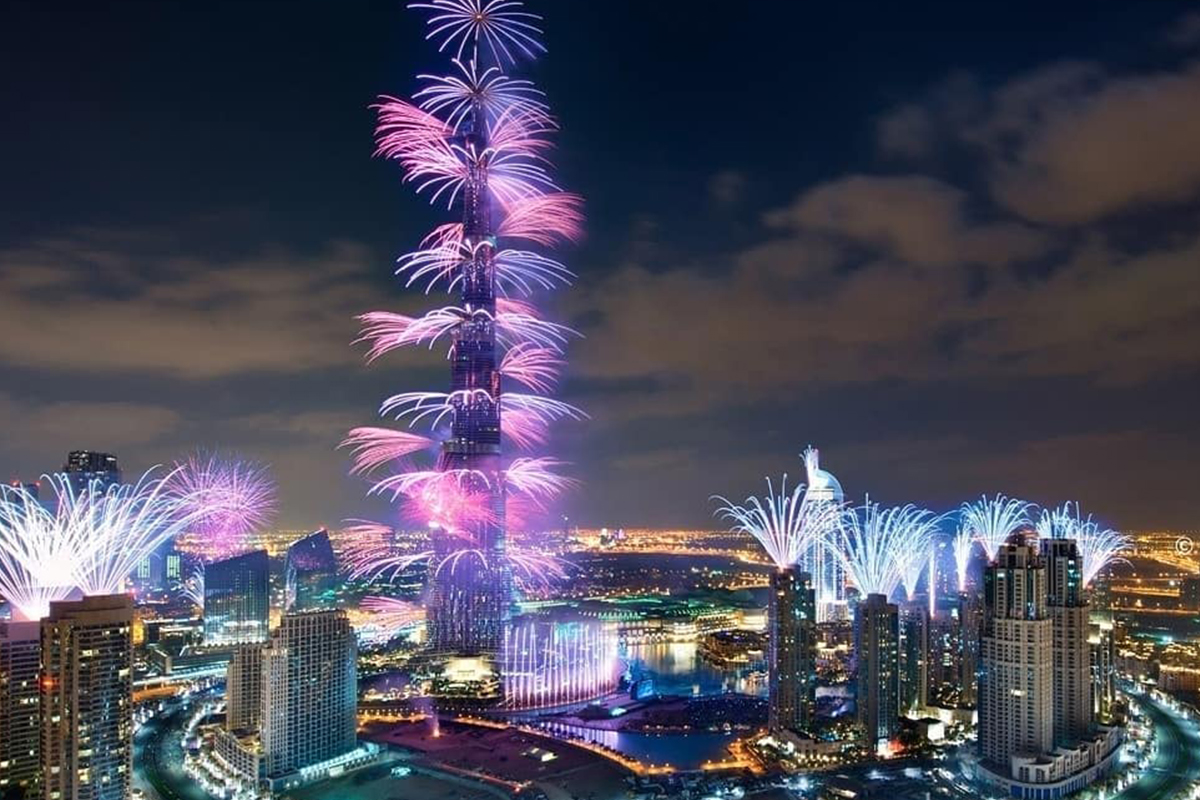 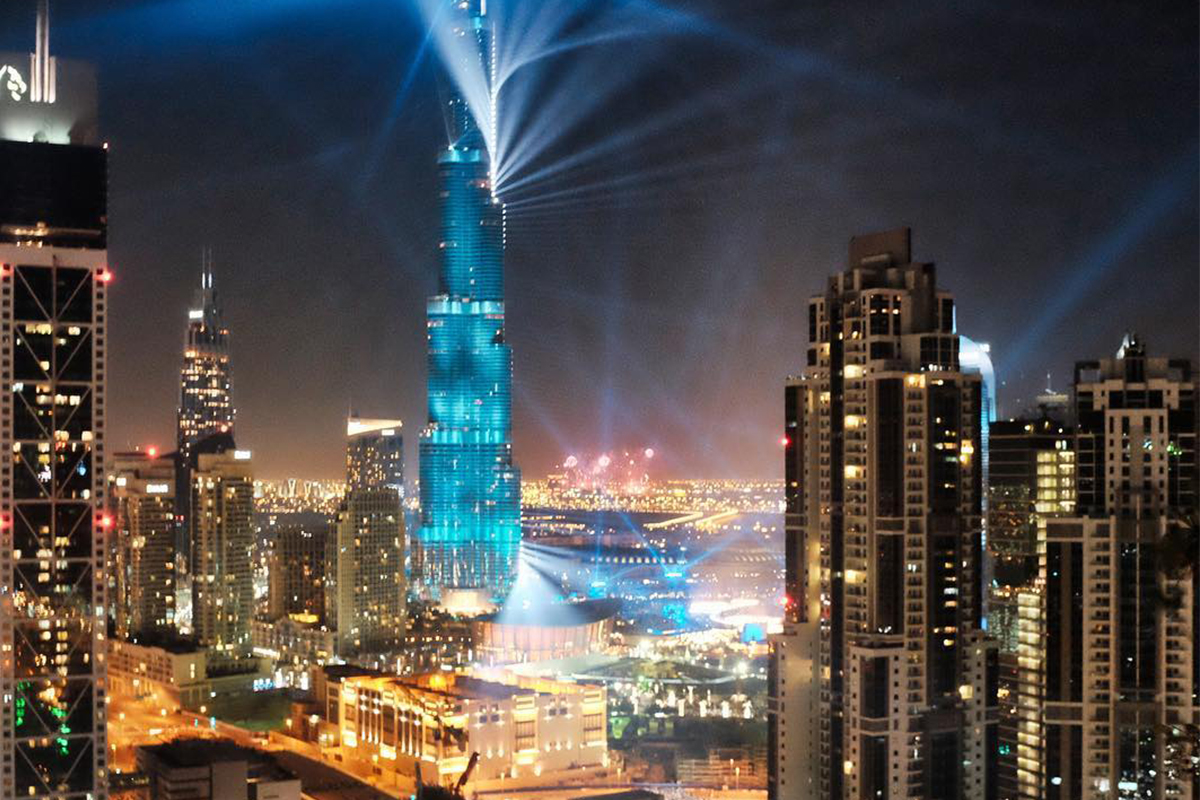 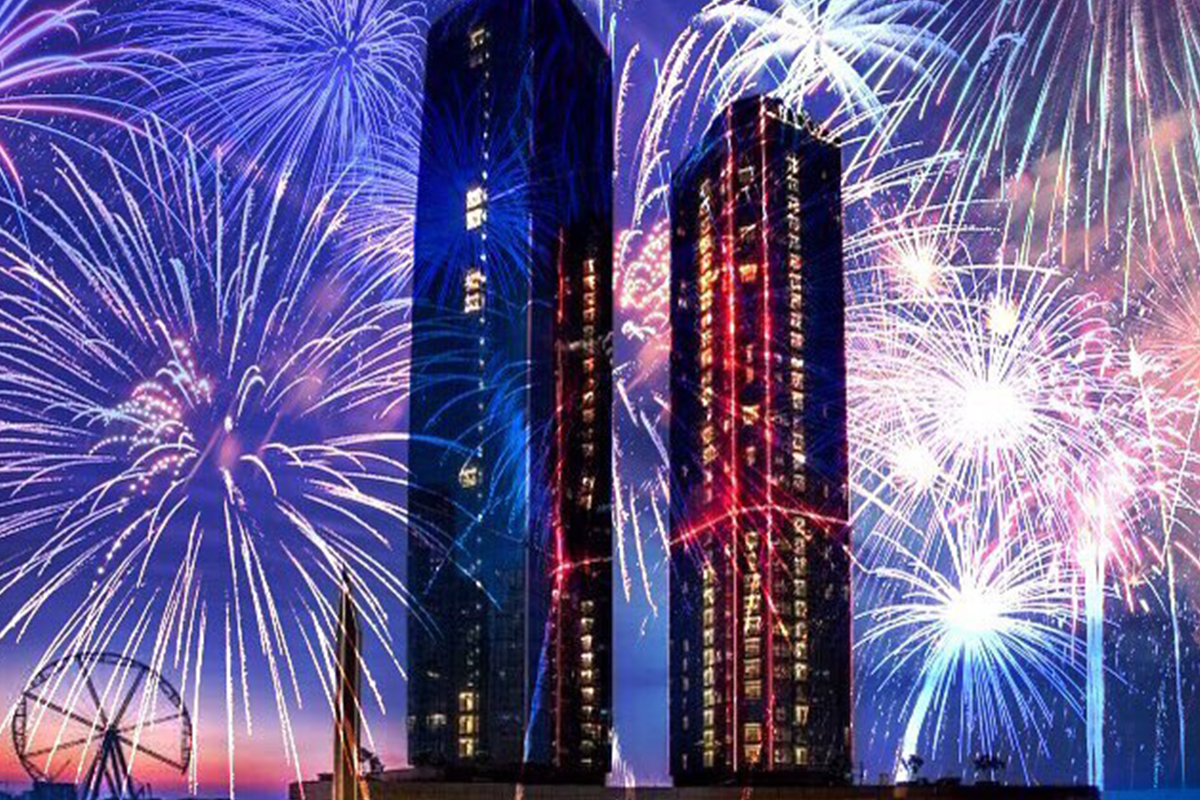 In this winter wonderland, hundreds of glowing hues transform the night sky in explosive bursts, complementing the beautiful Moscow buildings.

Count down to 2019 in historic Red Square or perhaps stroll along the legendary Moskva River for a vantage spot without the crowds. 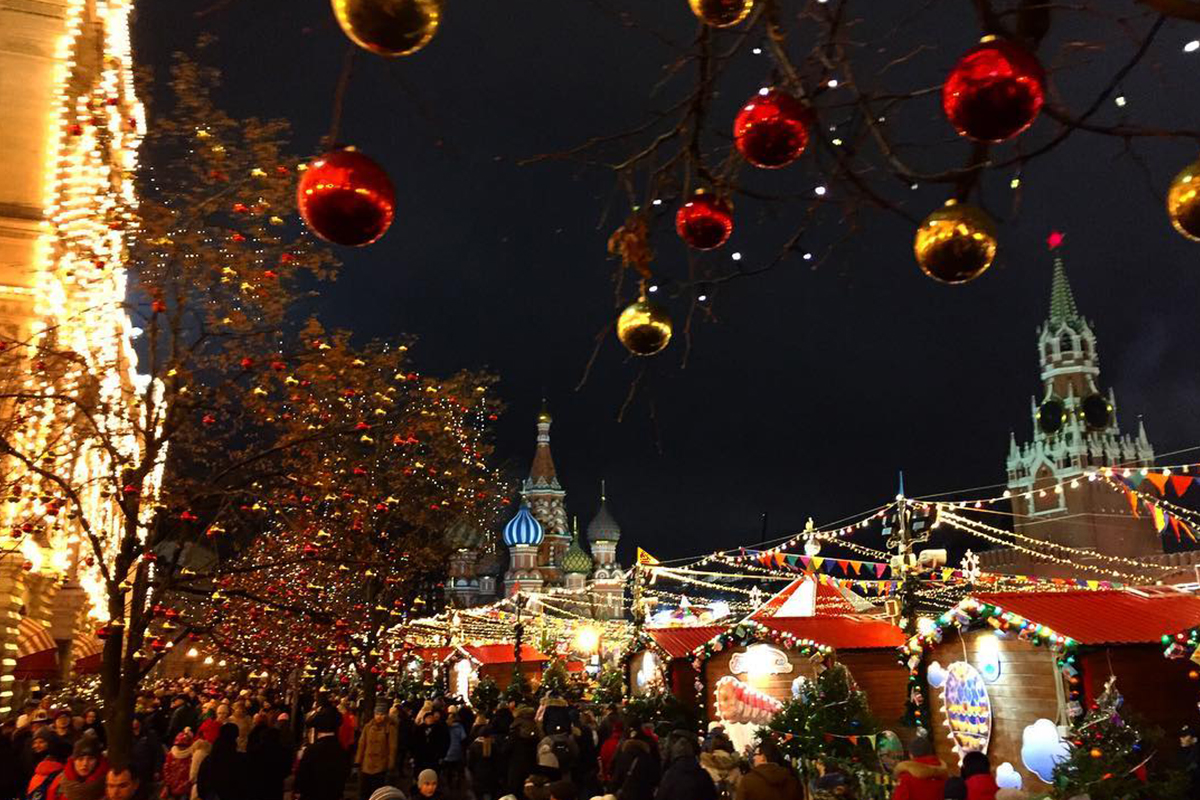 Find a prime spot on the Victoria and Alfred Waterfront on the last day of the year and you are in for a treat.

At the biggest New Year’s Eve party in South Africa, the waterfront is filled with carnival-themed performances, roaming musicians and circus acts – so the fun starts way before the fireworks shoot into the sky. 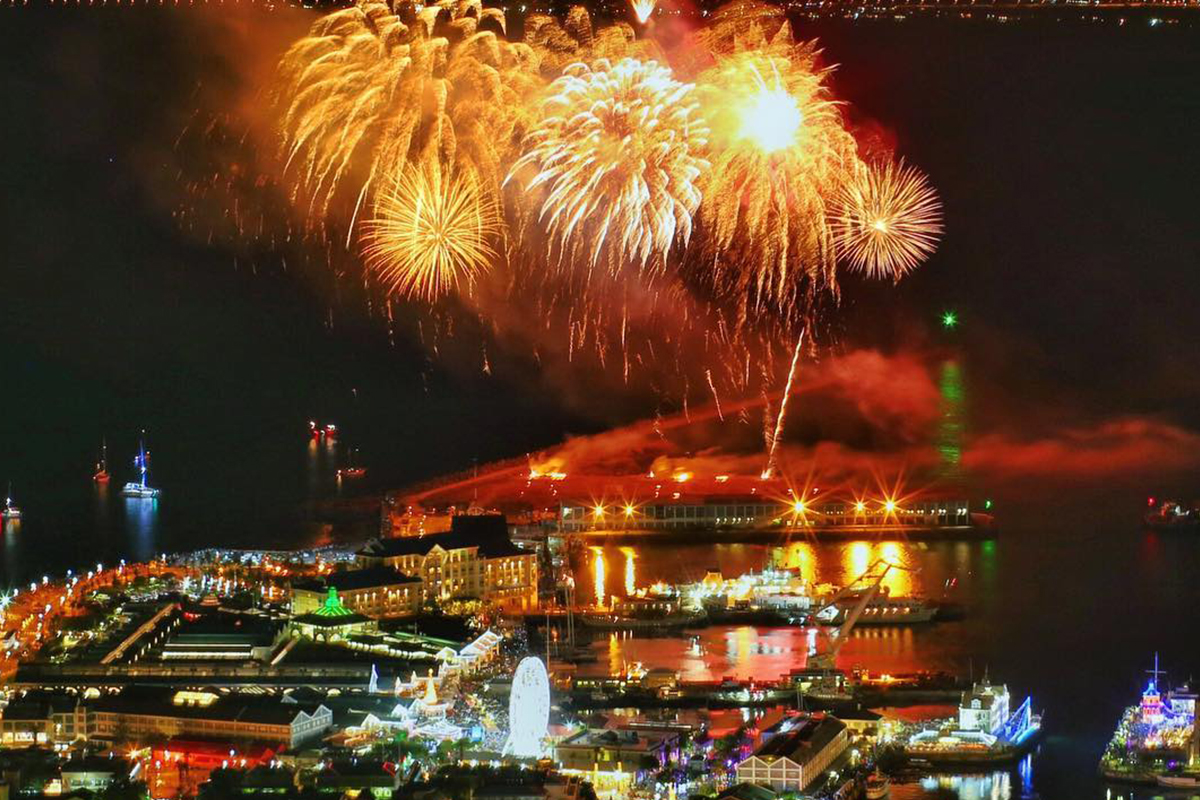 One of the most iconic landmarks in the world, the London Eye, comes to life with more than 100,000 people flocking to the popular destination to witness the fireworks show.

Westminster Bridge, South Bank and Victoria Embankment play host to some of the best view points in the city where more than 12,000 fireworks say farewell to 2018.

The chimes of Big Ben are expected to ring in 2019 (the clock has been silent since the four-year renovation started in 2017) as the musical pyrotechnics dazzle during the cold night. 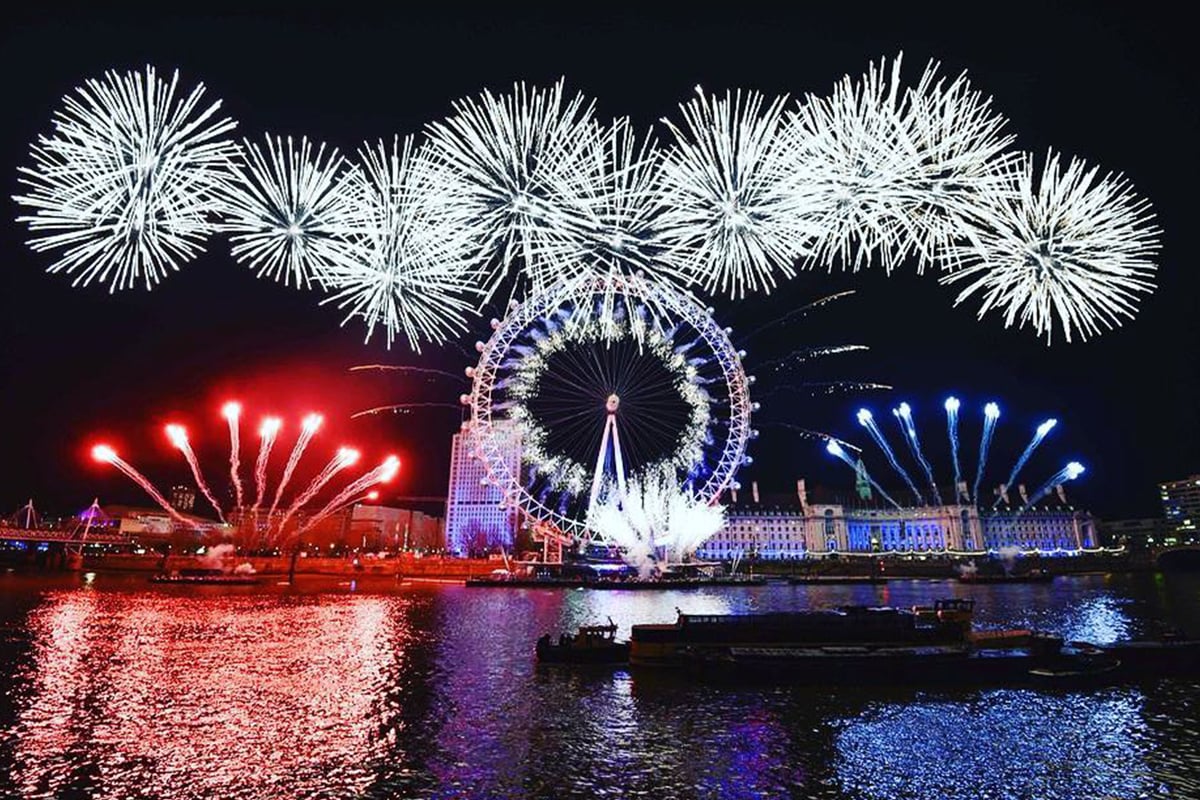 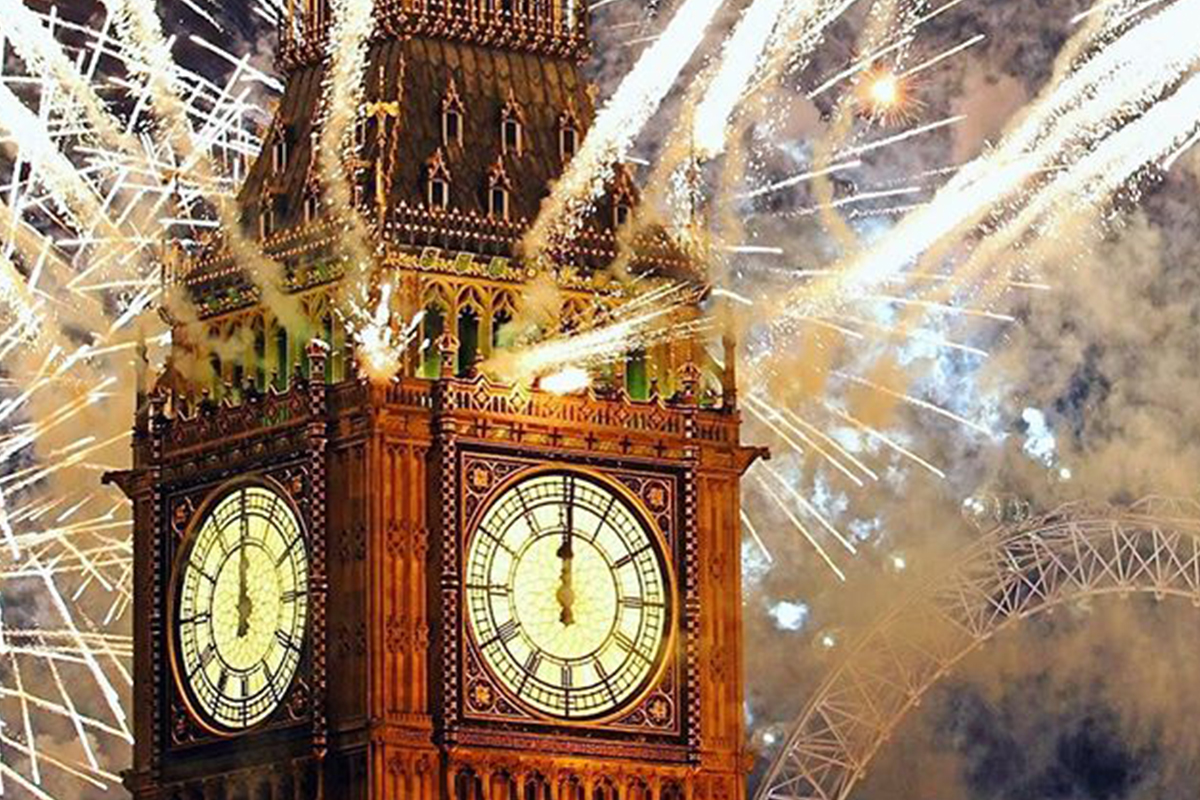 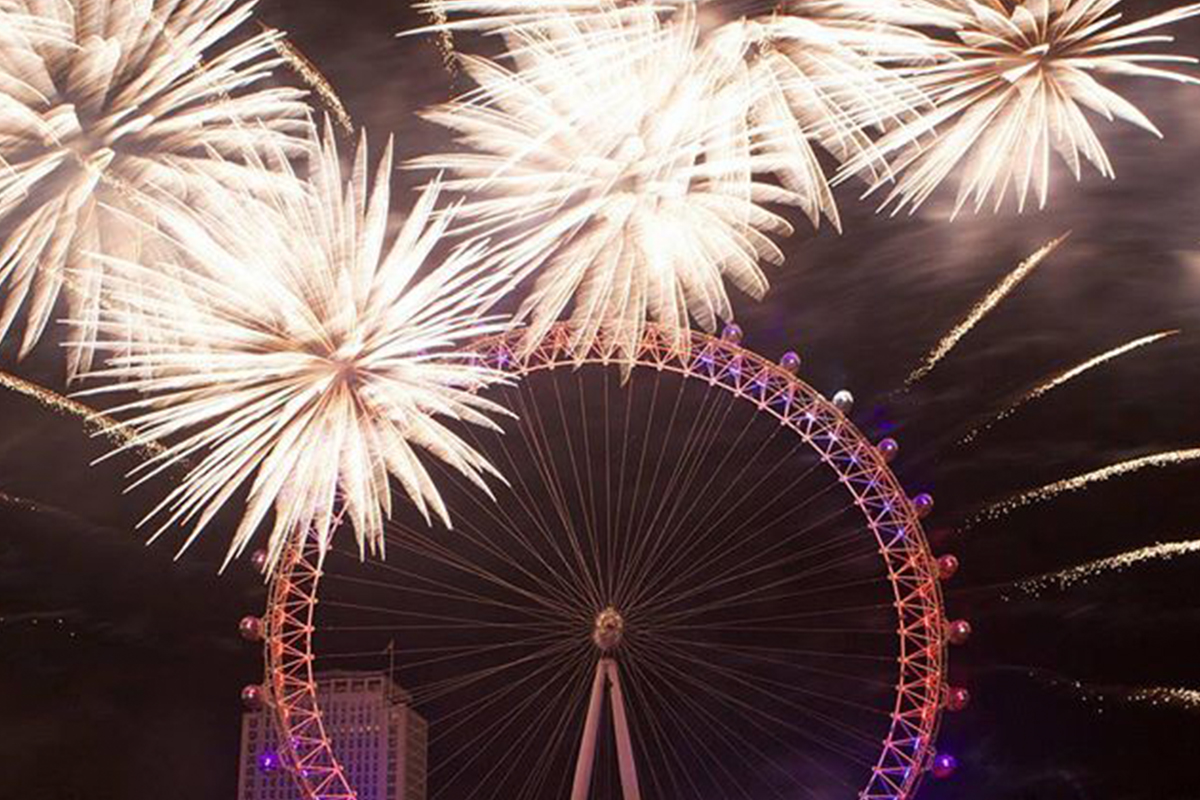 For a Brazilian carnival oozing spiritual rituals like none other, Rio de Janeiro is the place to be.

Copacabana beach is the host of the biggest event in Rio where about 25 tonnes of fireworks were once launched from the promenade, exploding over the heads of the crowd, but are now propelled from large barges to create a breathtaking show. Last year, the event cost about R$25 million (A$8.8 million).

As the new year is traditionally a time of renewal, locals don white clothes as a symbol of the fresh year to come. 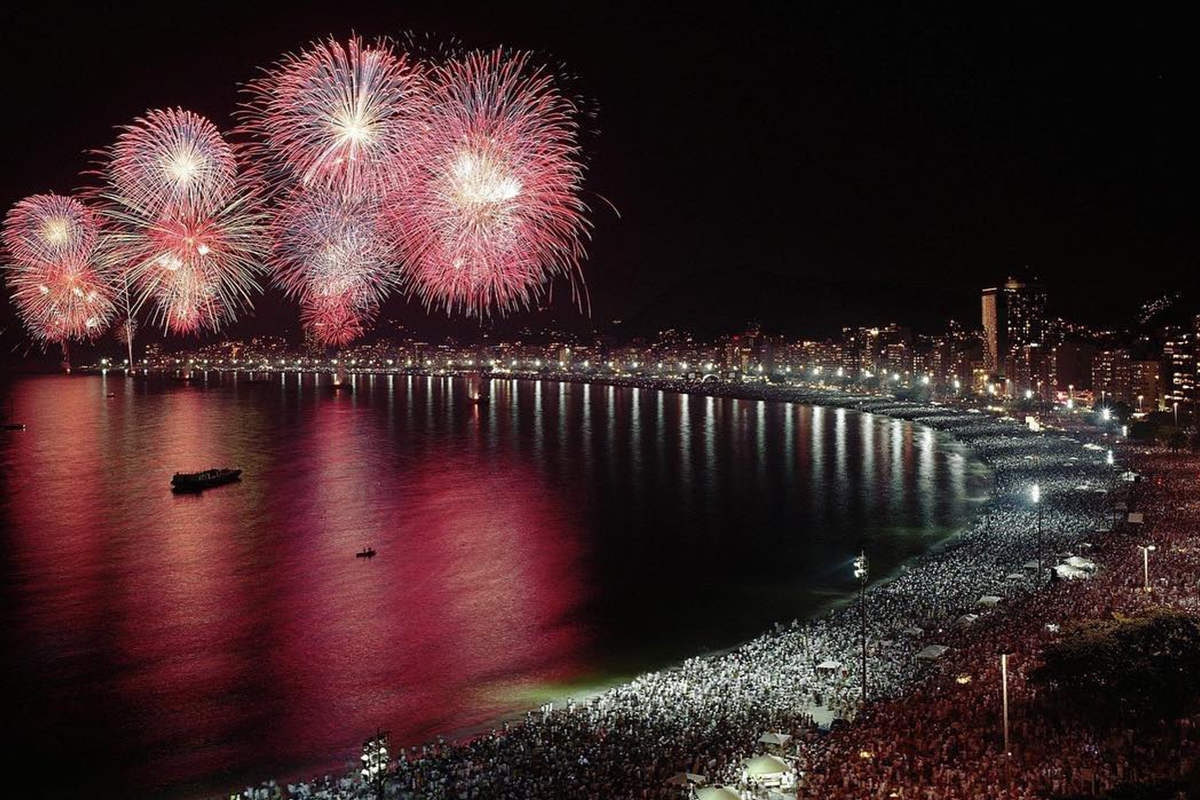 Whether you’re tightly crammed into Times Square or tucked away on Coney Island, as long as you have a thick coat and glass of bubbles in your hand, you can’t go wrong.

The ball drop in Times Square – a 110-year-old tradition – is one of the most famous scenes heralding in the new year. Millions of people brave the snow to experience the ball, embellished with Waterford Crystal triangles, descend as one year blends into another.

And if a more peaceful start to 2019 is what you’re after, enjoy a night of ice skating, amusement park attractions and fireworks by the water at Coney Island or take in the electric pyrotechnics bursting off the Brooklyn Bridge from the comfort of a nearby apartment. 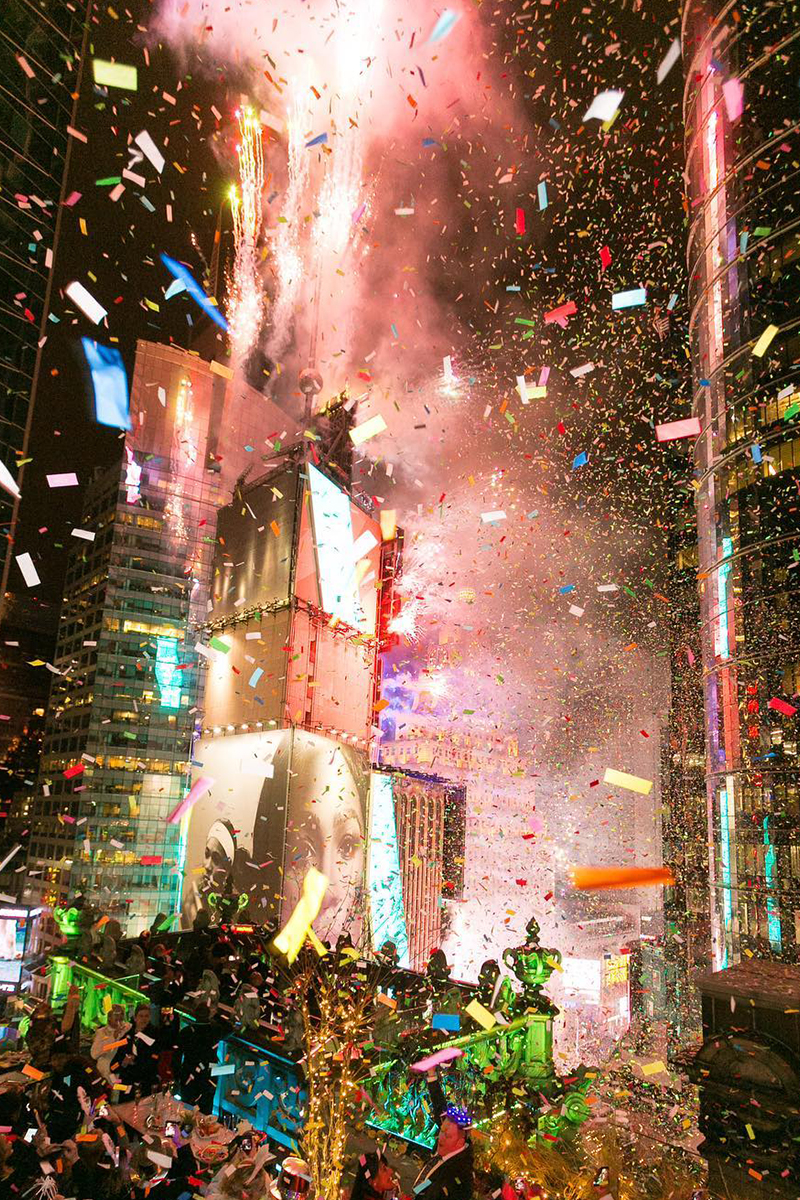