Most of our economic slowdowns have been driven by a shortage of demand. This one is starting with a different problem – and that means different remedies. 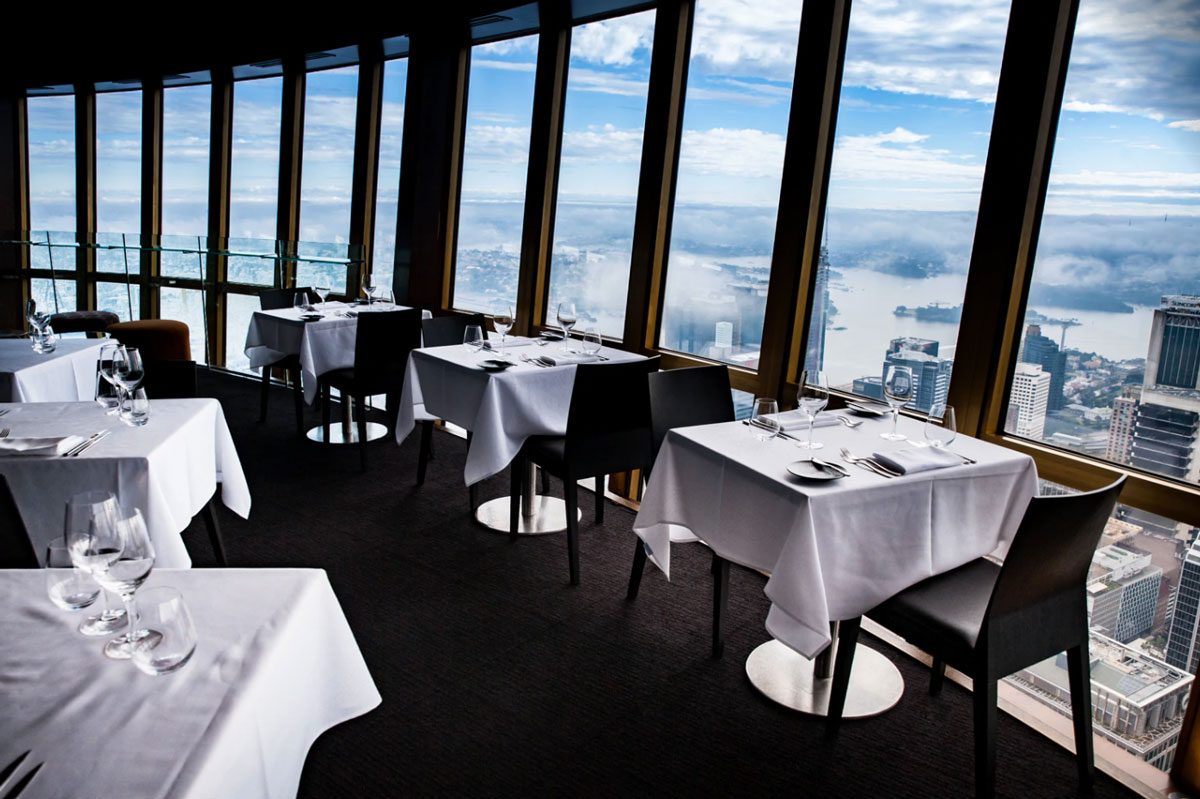 When an epidemic like coronavirus hits, the first-order challenge is to end the epidemic. No-one really even knows its potential right now: it could be severe, but it could also be coming under control already. Stop it fast and you’ll save a lot of lives.

Nevertheless, this epidemic does seem likely to hurt economies. And while a slowdown or even a fully fledged recession does not kill anyone directly, its indirect effects – unemployment, under-employment, broken businesses – can last for years and ruin lives. Australia’s measures to date look competent.

Notably, Prime Minister Scott Morrison has jettisoned years of investment in bad-mouthing Labor’s 2008 economic stimulus. Instead, he has issued a package of economic measures with a strong family resemblance to Kevin Rudd and Wayne Swan’s 2008 package. And Morrison has said goodbye to the 2019-20 budget surplus that he had already assured everyone was arriving.

Better, he seems to think, to cop the embarrassment of these reversals than to be the bloke who ends Australia’s 29-year recession-free run. And he’s probably right.

What we don’t know

Here’s the bit we still don’t know how to do: get stimulus money to just where it’s most needed. And that goes double for this economic shock, because it’s not like most others.

In most recessions, consumers don’t want to spend. But our coronavirus-thumped economy does not face quite this usual threat. Supermarket Coles has rarely been busier, some of its employees taking just 12-hour breaks between shifts.

Instead, the biggest prospective problem is that some firms won’t be able to meet demand, because many of their workers are being told they must engage in “social isolation”. The supply of labour is being disrupted, and that disruption is echoing all through supply chains.

At the same time, consumers are being told that for the collective good, they must stop spending on anything that brings large numbers of people together. In an impressively quickly assembled new book on economics of the crisis, economist Simon Wren-Lewis calls this “social consumption” and notes there’s more of it than you might think.

So to take one example that’s already with us, the AFL’s female teams are playing their fast-improving matches to empty stands, and its men will open their season this week with a crowd of none at a game that might normally attract 90,000 paying customers. Rugby is in a worse state. And that means the cashflow to these sporting codes is drying up.

All these disruptions in turn disrupt firms downstream. At Richmond’s Corner Hotel, a few hundred yards from the MCG and reliant on beer sales to MCG patrons, the managers are already no doubt having some tough conversations. As supply chains are disrupted, such conversations will multiply.

On Wren-Lewis’s modelling, these sorts of disruptions might produce a downturn that is short in duration, but also sharp and deep.

Blunt instruments are the answer

As none other than former Rudd Government economic adviser Andrew Charlton has argued, blunting such shocks may demand a different type of stimulus from that which Rudd delivered in 2008.

What shape should such a stimulus take? How do you target government relief to a disrupted supply chain? Governments have almost never tried such targeting, and Morrison’s government is not doing it now; instead, it’s splashing money to hard-hit and thriving businesses alike, just the way the Rudd government splashed it to consumers. Just as some consumers in 2008 kept their job and got a cheque as a well, some 2020 businesses will receive the double whammy of continuing demand and government benefits.

The government’s measures are blunt instruments. Nevertheless, in an era of cheap money, they’re instruments worth wielding.

This is also where governments’ efforts to cut their budget deficits pay off. Australia’s federal and state governments have some room to spend up, cut taxes and push deficits higher temporarily. Contrast that with the US, which stopped cutting deficits under Trump and now suddenly looks nastily exposed. Interest rates can’t help much; most central banks have already cut interest rates to near zero.

One measure Wren-Lewis recommends is that governments and central banks start talking with banks “about not forcing firms into bankruptcy during any pandemic”. (These go-easy conversations happened in Australia in 2008.) Another Wren-Lewis idea is a coronavirus fund that might be used to supplement the pay of self-employed workers who we would like to self-isolate if they get sick.

Even more than in 2008, there’s also a case for directing scarce government funds to the places where they can do the most good. That may mean singling out the businesses really hard-hit by a sudden lack of customers. Those businesses stretch from football to the arts (museum crowds are down) to education (schools are closing) to tourism.

The stakes are high. In the pessimistic scenario, job losses might start turning this supply-side slowdown into an old-fashioned demand-side slowdown as well – one where people fear spending money even on the things that are still for sale. A paper by two European economists published on March 10 calls this a “supply-demand doom loop”.

The need to act fast

“It is at times like these that we really need governments to act fast and think ahead,” concludes Wren-Lewis. “One lesson of coronavirus may be never put into power politicians who have a habit of ignoring experts.”

We don’t really know yet how bad this epidemic will be. The effects of epidemics can be overestimated as well as underestimated, and overestimation is particularly likely in the middle stages, as people realise that the effects of the epidemic are getting worse. In an impressively quickly assembled new book on economics of the crisis, economists Richard Baldwin and Beatrice Weder di Mauro depicts this: 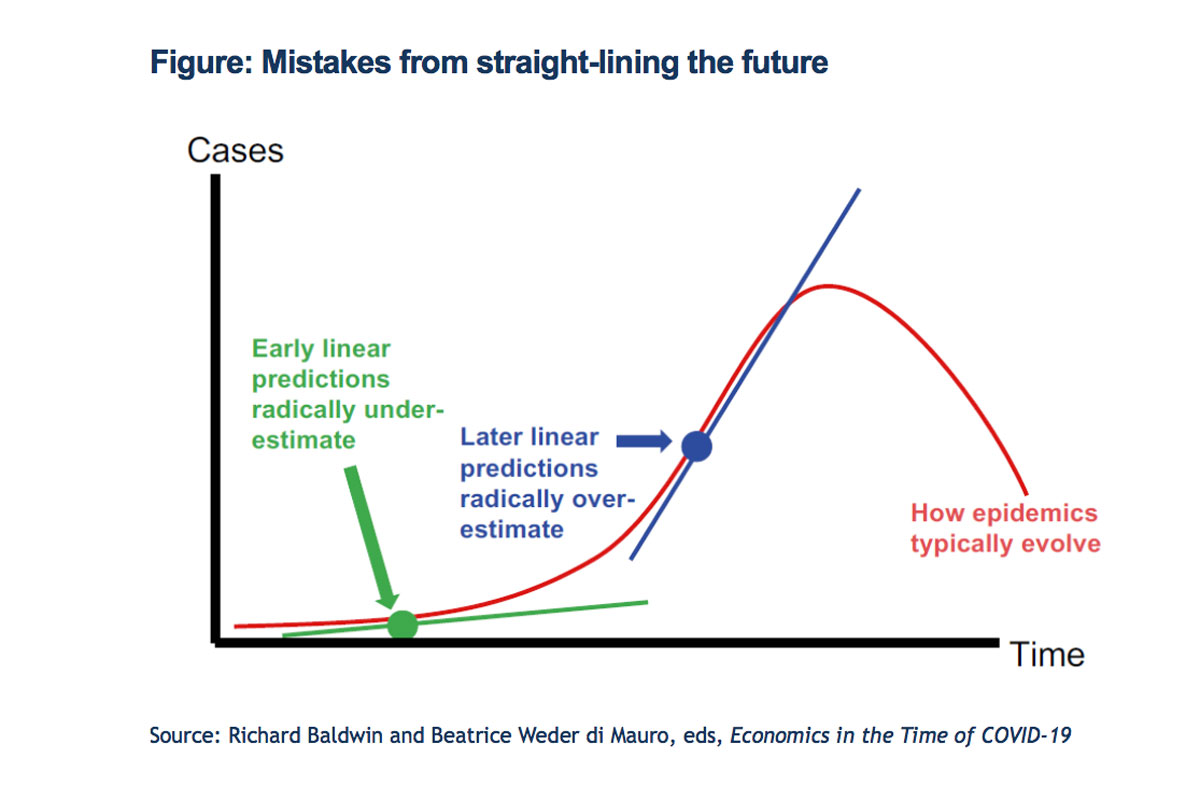 Read next: How governments can protect against coronavirus