How Native Digitals are changing the entrepreneurial scene

A generation of digital-first entrepreneurs is emerging as key players in the startup scene. Native Digitals are embracing new technology and look set to disrupt and innovate in new and exciting ways. According to bestselling author and entrepreneurship guru Christopher Lochhead: “The biggest ever entrepreneurial change is happening in plain sight, but few see it – it’s the emergence of a whole new category of human: Native Digitals. In fact, it’s the biggest change in the definition of what a human is since we shifted from hunter-gatherers to farmers 12,000 years ago.”

The three-time Silicon Valley CMO may not be a proponent of understatement, but his prophesying on entrepreneurial trends has been highly influential. And he sees none more seismic than the new breed of homo sapiens.

“The biggest ever entrepreneurial change is happening in plain sight, but few see it.” – Christopher Lochhead

“They are a demarcation point, 180 degrees different than Native Analogues,” he tells The CEO Magazine. “They’re under 35 and digital is their primary life. It may seem insignificant to Native Analogues, yet it’s profound. Over the next 10 years, this shift will cause massive market cap destruction in the S&P 500, where the average CEO age is 58.”

For Lochhead, there’s no better illustration of the two worlds colliding than the relatively new phenomenon of the videoconference.

“After a digital meeting, ask a Native Analogue what just happened and they’ll say, ‘We had a Zoom meeting’. The Native Digital says, ‘We had an in-person meeting’.  When Native Digitals meet in the analogue world, they say ‘in real life’ because they’re digital-first.”

1. Optimism about the global recovery

More than half of respondents agreed that the pandemic opened up new business opportunities, up from less than a fifth in 2020.

Confidence may have returned but, with the exception of Saudi Arabia and the Netherlands, fewer new businesses are seeking finance or being launched.

Even when entrepreneurs are turning their brilliant ideas into something tangible, many remain in survival mode. In a quarter of the territories studied, half of the new business owners are so pessimistic that they don’t anticipate employing anyone for five years.

In the United Kingdom, 70 per cent said that starting a new business there was easy, yet fewer than one in 10 were planning to do so. In India, four out of five agreed that it wouldn’t be difficult, but only one-quarter of them were going to dip their toes into the market and give it a go. The authors describe this as a tricky paradox where a surprising number need some gentle hand-holding to get over their fear of failure.

In every country apart from France, South Korea and South Africa, startups are embracing digitalization more than established businesses. It’s particularly true in poorer couns where digital infrastructures are improving.

How can we expect the next Musk, Bezos or Jobs to emerge when nearly every education system examined is so bad at teaching the skills of entrepreneurship? The report warns that the sheer speed of technological change means it’s even more critical for children to be equipped with digital nous and business acumen before they enter the workforce. The continued economic chaos caused by the COVID-19 pandemic, allied with political uncertainty, has had a serious knock-on effect on entrepreneurs, says Barry Moltz, a member of the Entrepreneurship Hall of Fame, Adjunct Professor on the subject at the Illinois Institute of Technology and a self-confessed “recovering entrepreneurholic”.

“What’s affecting them right now is cost inflation, shortage of employees and supply chain issues, so they need to protect their cash flow to protect themselves,” he tells The CEO Magazine. The list of major clients he has helped includes Dell, American Express and Microsoft.

Irrespective of global disruption, his formula for entrepreneurial success is P x P = P. “People times process equals profit,” he explains. “Businesses aren’t about ideas but the execution of those ideas. When you give people a great process, it’s like they are doing their work with the aid of a jetpack.”

It’s certainly true that the past three years have jet-propelled those visionaries who were canny enough to grasp opportunity from the chaos. For Jason Feifer, author of entrepreneurship bible Build for Tomorrow and host of the podcast Problem Solvers, it’s been a boom time for getting business ideas off the ground. 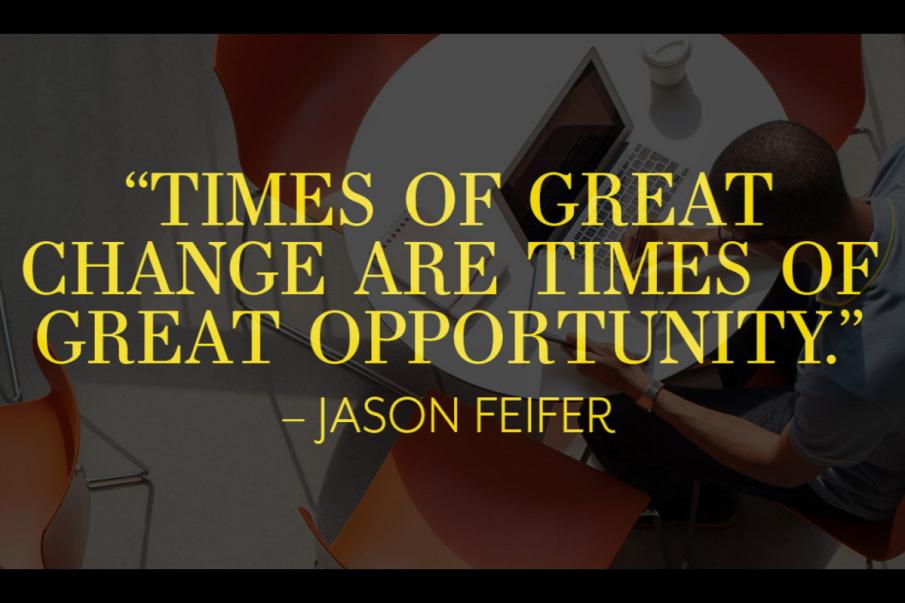 “More people have been driven to entrepreneurship as they seek to take more control of their lives,” he says. “Times of great change are times of great opportunity. It’s not like people’s needs disappear when there’s uncertainty. If anything, they become greater – and they also become different. That means you have the opportunity to spot new needs first and move towards them faster than others.”

It’s a view echoed by Lochhead, who argues that new ventures need to exploit such new needs with completely new thinking. He’s become an outspoken advocate of creating wholly original product types rather than competing with industry behemoths for a share of existing ones. His ‘category creation’ ethos has become an entrepreneurial buzzword, particularly among tech startups.

These are his tips for anyone minded to bet the farm on a big idea in 2022.

“Right now we’re experiencing the largest category-nado of new innovation in history, changing almost everything about the way we live, work and play,” he points out. “Entrepreneurs who understand this will create trillions in new value. Those who don’t will no longer be entrepreneurs.”

One of the most influential entrepreneurial trends may come as something of a surprise. Far from being maverick, devil-may-care risk-takers who bet their bottom dollar on a pipe dream that just might work, most tycoons who have built up business empires are actually rather risk-averse.

A recent study by French academics Michel Villette and Catherine Vuillermot found that success is usually dependent on a meticulously constructed strategy and a brilliant analytical brain that allows them to see a slam-dunk opportunity that no-one else has seen. Even those seen as nonconformist rebels usually go to great lengths to minimize every risk.