The all-electric Audi e-tron GT, which initially is in two guises – the e-tron GT quattro and RS e-tron GT – has been unveiled by the German luxury car manufacturer.

The wholly owned subsidiary of the Volkswagen Group states it is “an Audi such as the world has never seen before”.

“The e-tron GT is a standalone gran turismo, reinterpreted for the future. Its looks are a testament to premium automotive design. Bringing impressive driving performance, this is electro-mobility in the most emotive way. And with its sustainable concept, it takes a stand,” said Audi CEO Markus Duesmann.

“Because it’s not just the drive concept that is sustainable. The entire production at our Böllinger Höfe site now has a carbon neutral energy balance. This sends an important signal – for the site, our workforce and the future viability of Audi.”

The hour-long digital launch was impressive. Duesmann, along with Hildegard Wortmann, Board Member for Sales and Marketing; Henrik
Wenders, Senior Vice President Audi Brand; and Marc Lichte, Head of Design, presented the highlights of the new model. Actor and producer Tom Hardy, designer Stella McCartney and Formula One world champion Nico Rosberg added their personal insights. The musical accompaniment to the unveiling of the car was performed by singer-songwriter Janelle Monáe. Steven Gätjen was the host.

The Audi e-tron GT is not the first all-electric Audi; that title belongs to the increasing line-up of e-tron SUVs. However, it is the first based on the J1 platform shared with the Porsche Taycan.

World Premier! @Audi #etron GT/RS GT
Basically a Taycan with an Audi badge and starting price under $100k including AWD.
– 637hp
– 238mi EPA est
– 270kW Charging power (same battery as Taycan)
– Arriving this summer in the US
I think it looks great and fits well for Audi. Nice pic.twitter.com/UUHxhGo4Pl

“Both models are powerful, fast and dynamic, and both have zero local emissions. The sum of these qualities adds up to a strong character that reinterprets the idea of the gran turismo,” said Audi in a media release. 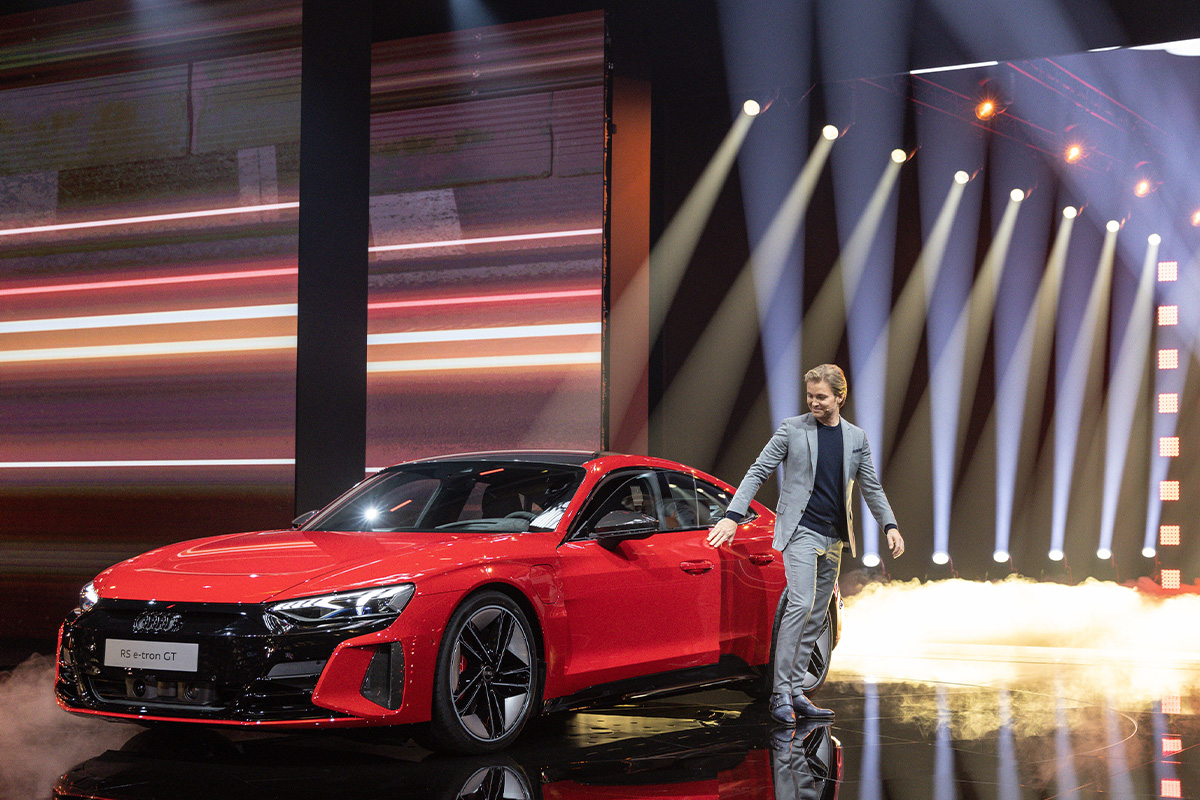 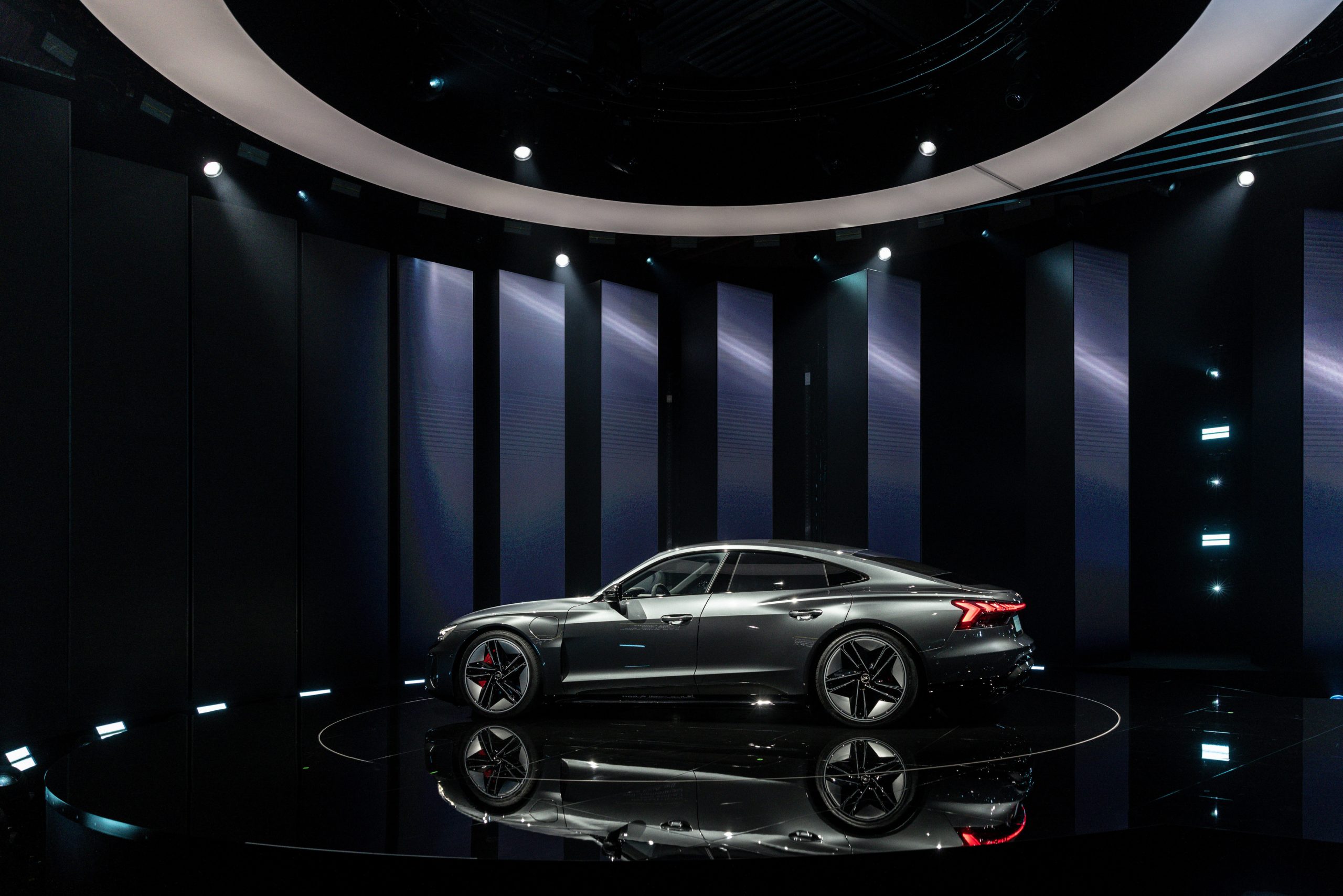 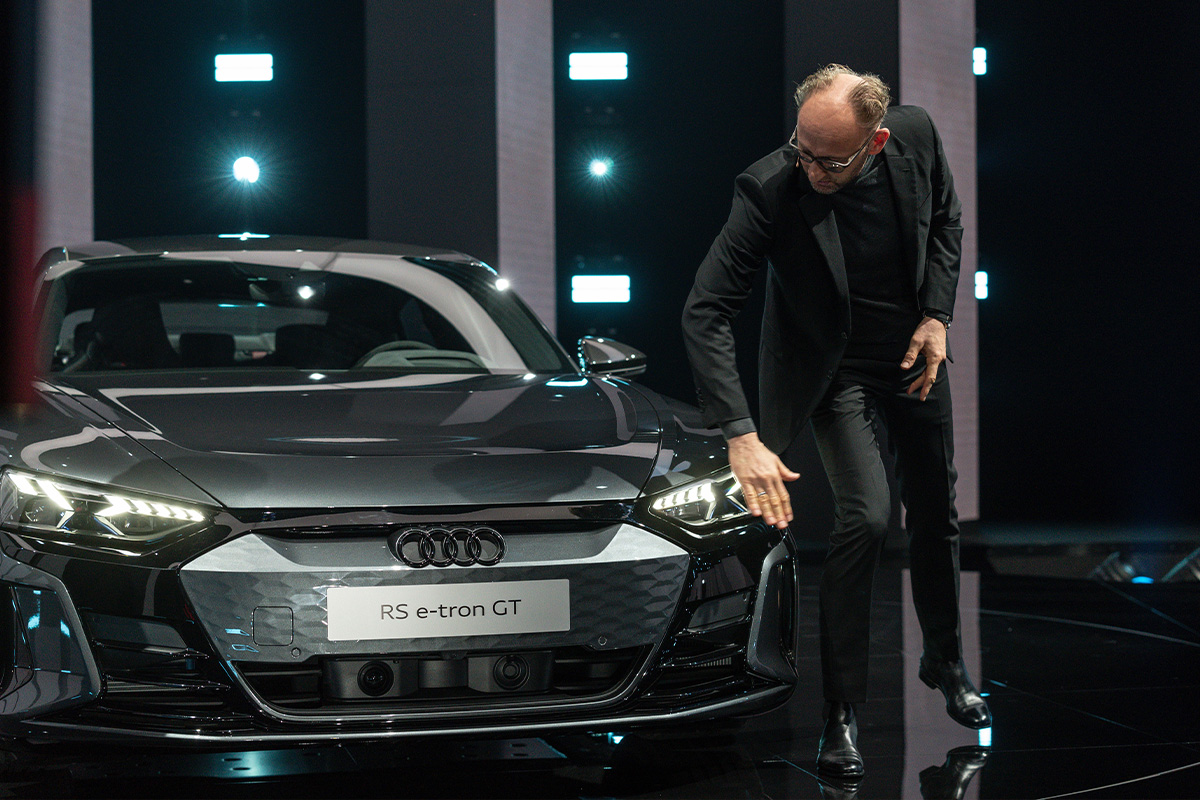 The look of the Audi e-tron GT is striking. It is a fraction longer than the Taycan, a little narrower and a few centimetres taller. There’s more boot space – 405 litres in the back and another 85 litres in the ront. There is the option of 19- to 21-inch wheels. Matrix LED headlights are standard on the RS, an option on the quattro. Both models offer the option of Audi laser light, which doubles the range of the high beam. The rear lights are connected by a flat light strip.

With fewer cooling requirements, the look on the Audi e-tron GT is new. There is a low inverted single-frame grille in the vehicle’s colour.

On the inside, rear passengers are treated to the same “foot garage” as the Taycan – a dimple designed into the battery to give your feet somewhere to go. At the front, the dashboard is subtly tipped towards the driver – typical for sporty Audi models – presenting them with a 10.1-inch touch display to go with the 12.3-inch ‘virtual cockpit’ screen behind the steering wheel. Audi has made the e-tron GT with a leather-free interior, constructed from a “high-percentage of recycled material”. Sound-insulating glass in the windscreen is standard.

“The Audi e-tron GT is the beginning of a new era for Audi. Our aim is to shape the future of electric premium mobility. Love of detail, maximum precision and design that points the way to the future show how much passion we at Audi put into designing and making vehicles.” said Wortmann.

Orders for the Audi e-tron GT are being taken from the northern hemisphere Spring. The first models will be made at the company’s site in Neckarsulm, Germany, by the end of the year.