The Italian carmaker has combined a V6 monster with an electric motor to create two cars in one sexy package capable of over 330 kilometres per hour. Then they threw the keys to this weary eyed writer who usually drives on the opposite side of the road. 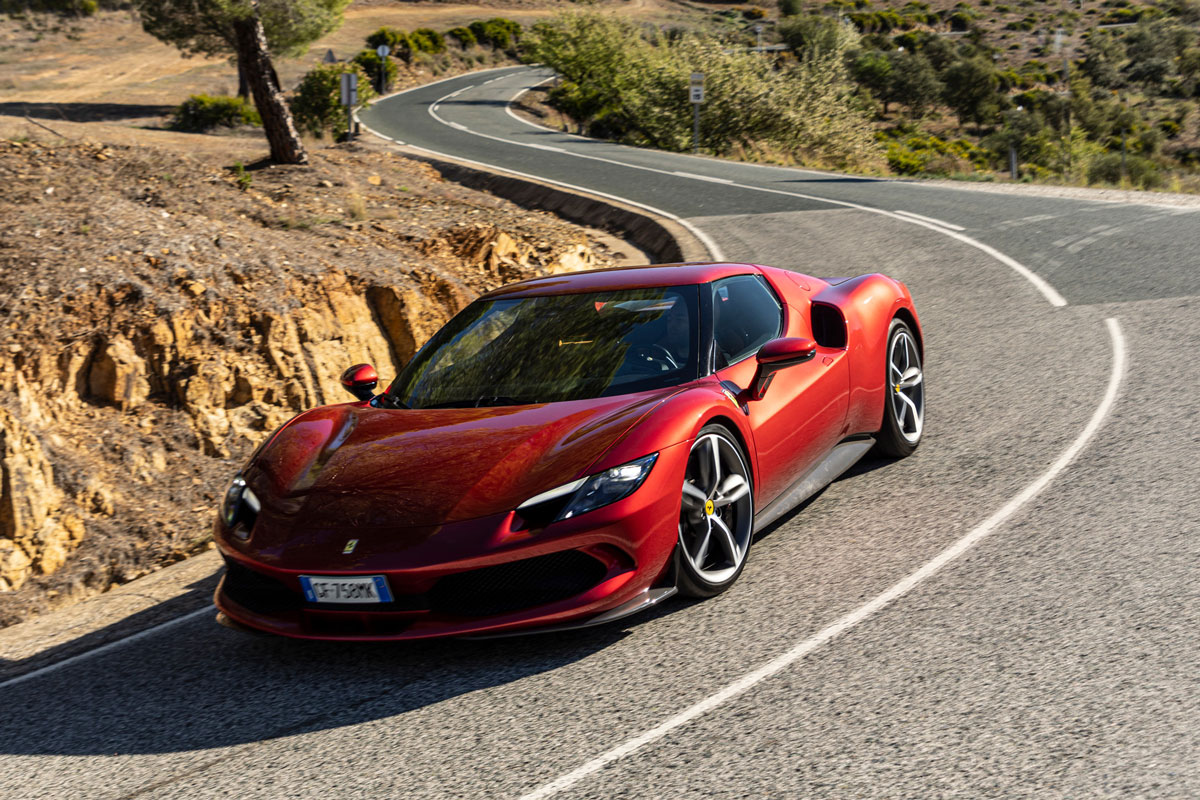 As the world of international travel finally returns, I bring you wondrous tidings – I have found a cure for jet lag; the only bad news is that it costs A$568,300.

Actually, there is no bad news because your cool half million also gets you perhaps the most perfectly balanced, lusciously shaped and technologically advanced road car the world has ever seen: Ferrari’s new 296 GTB. 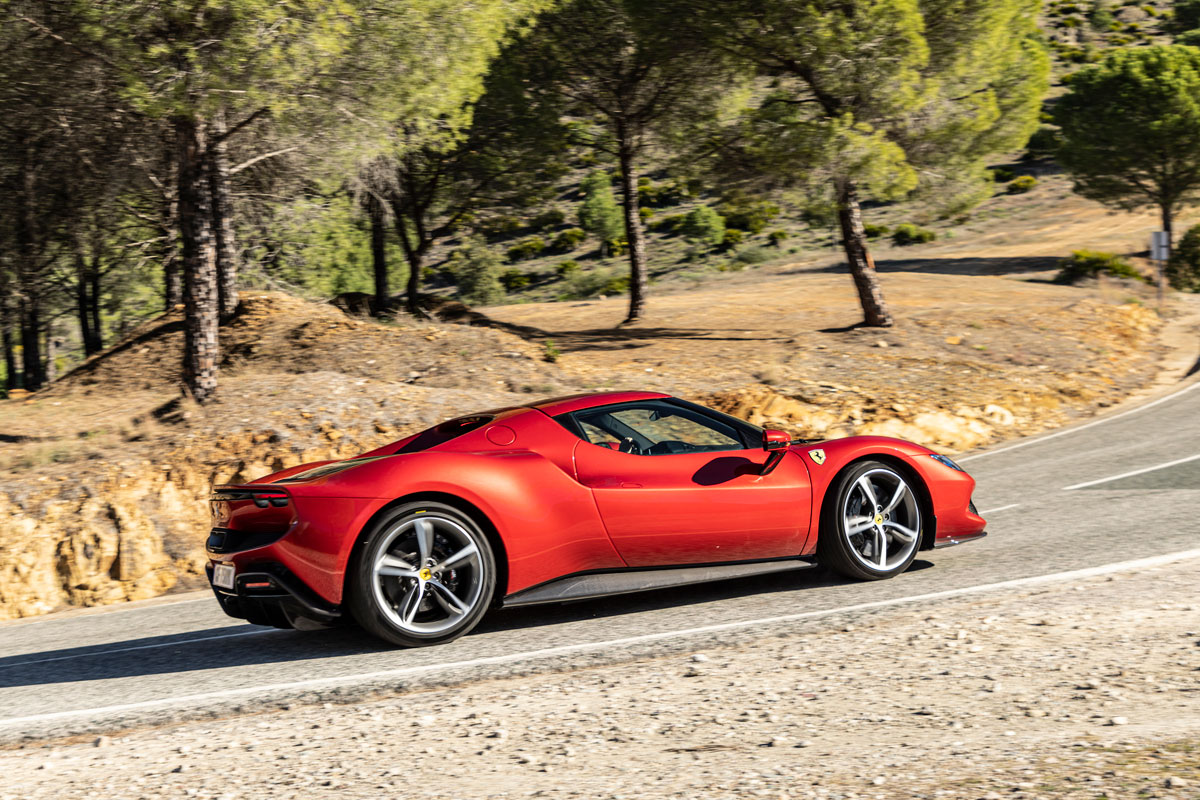 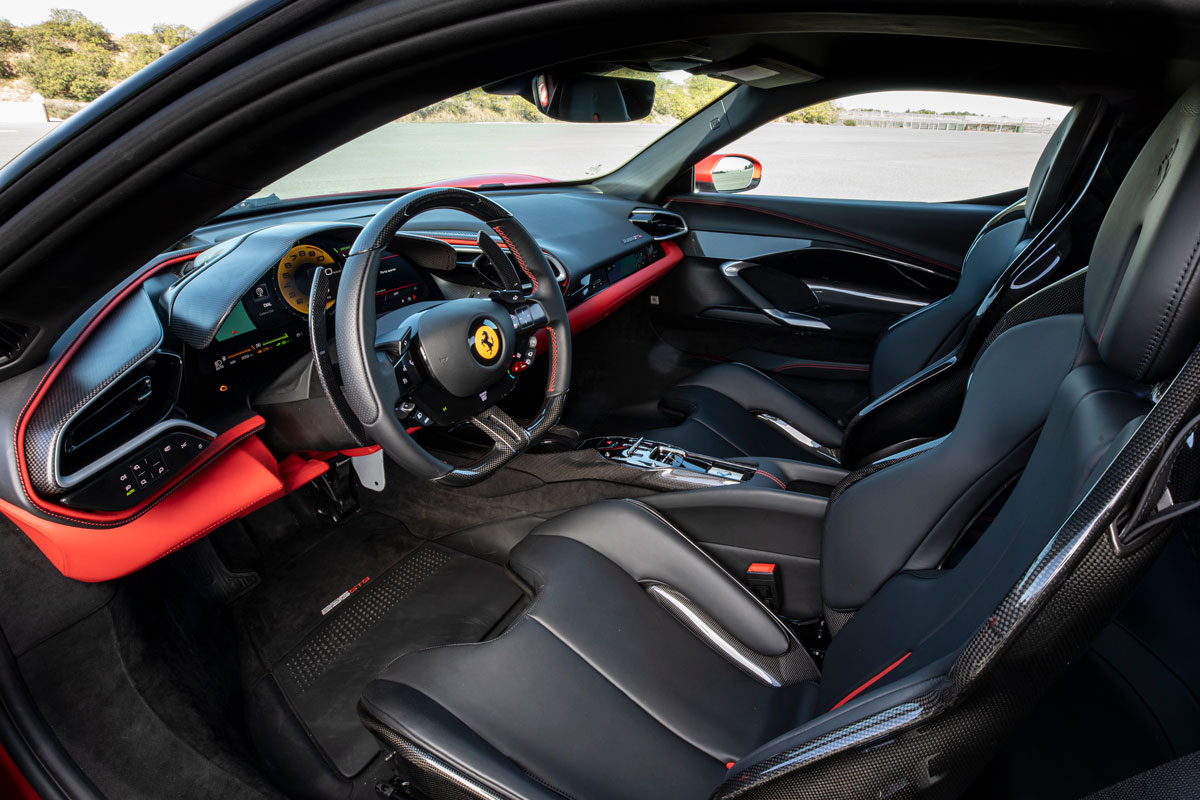 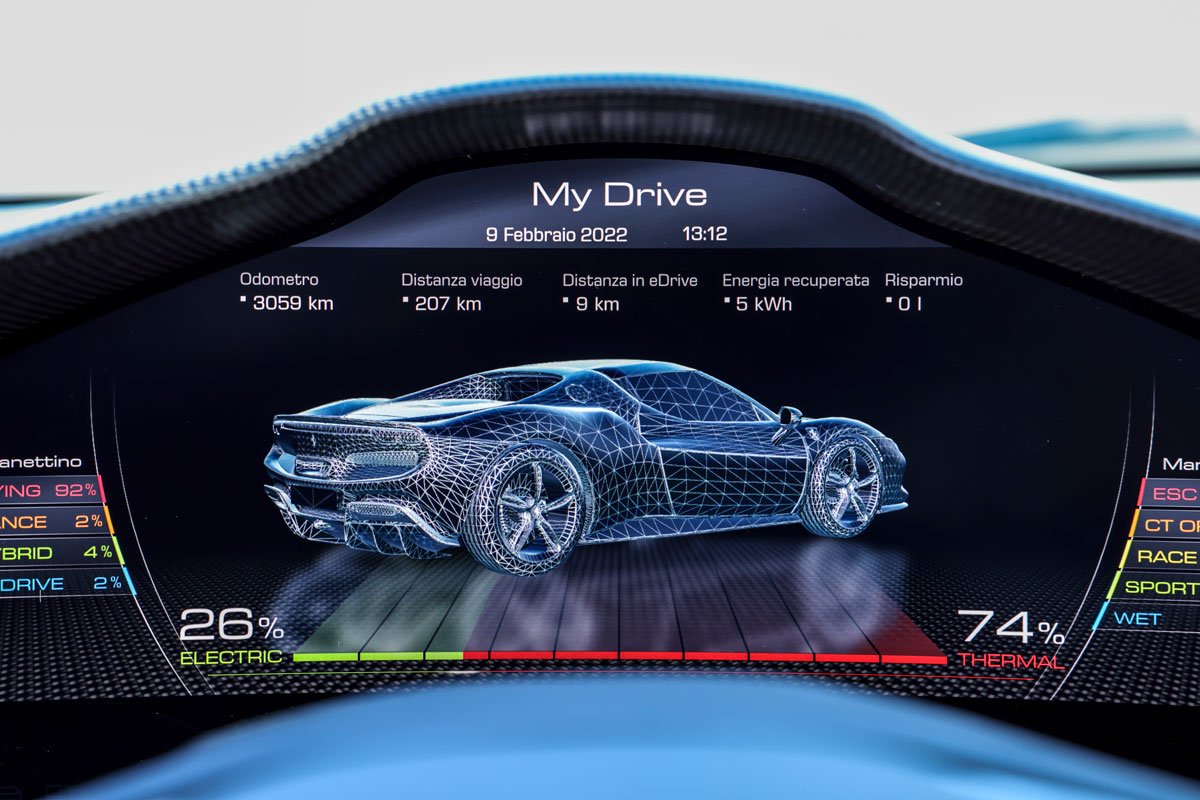 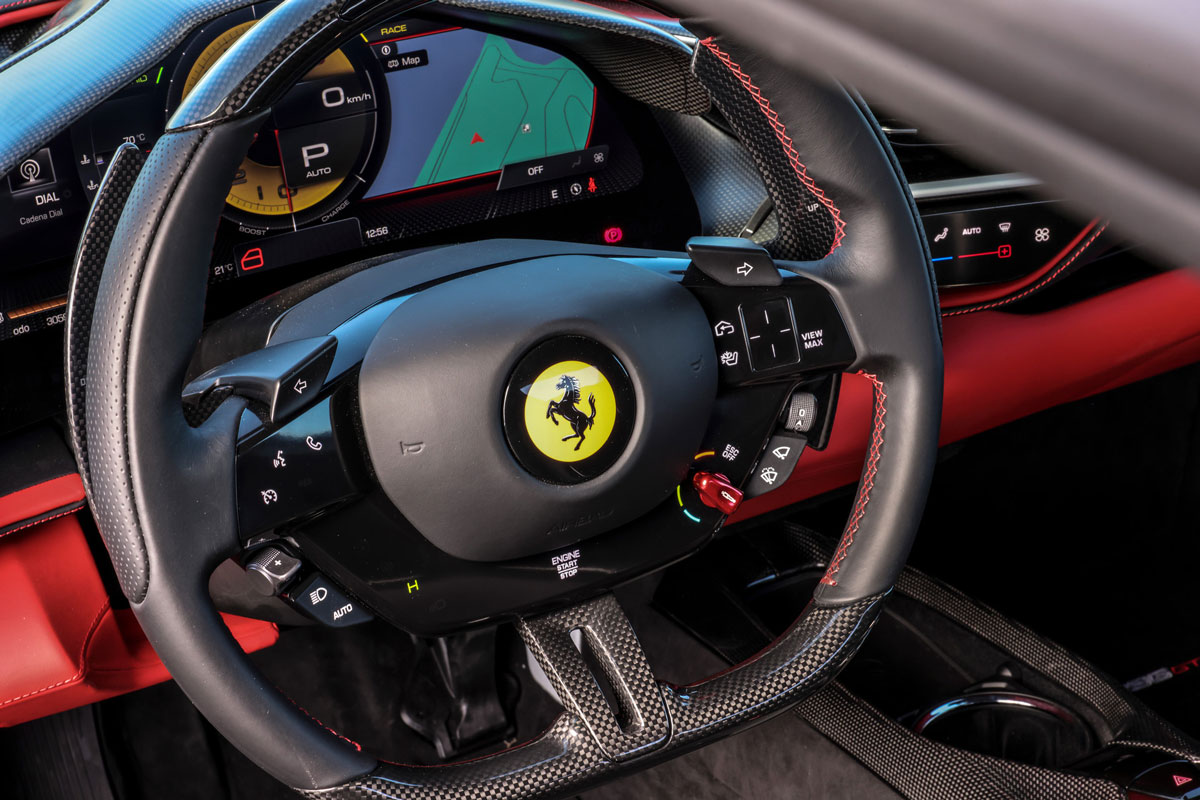 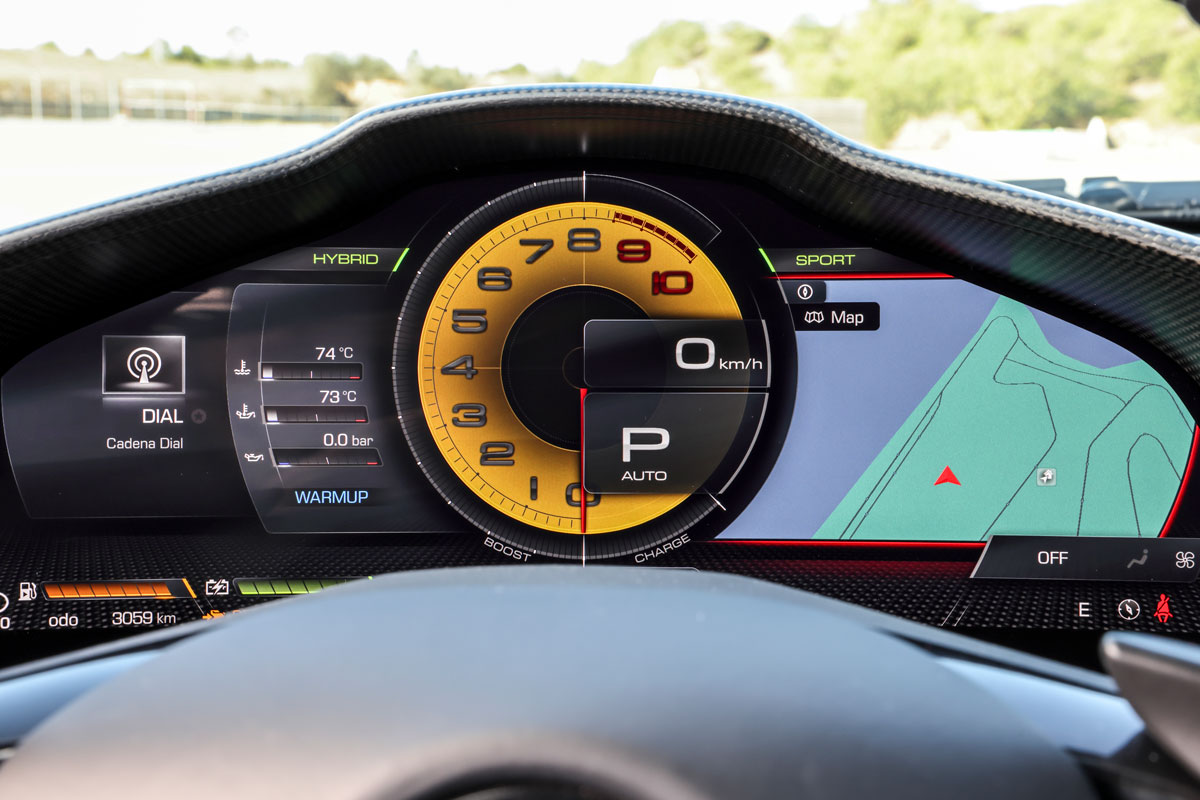 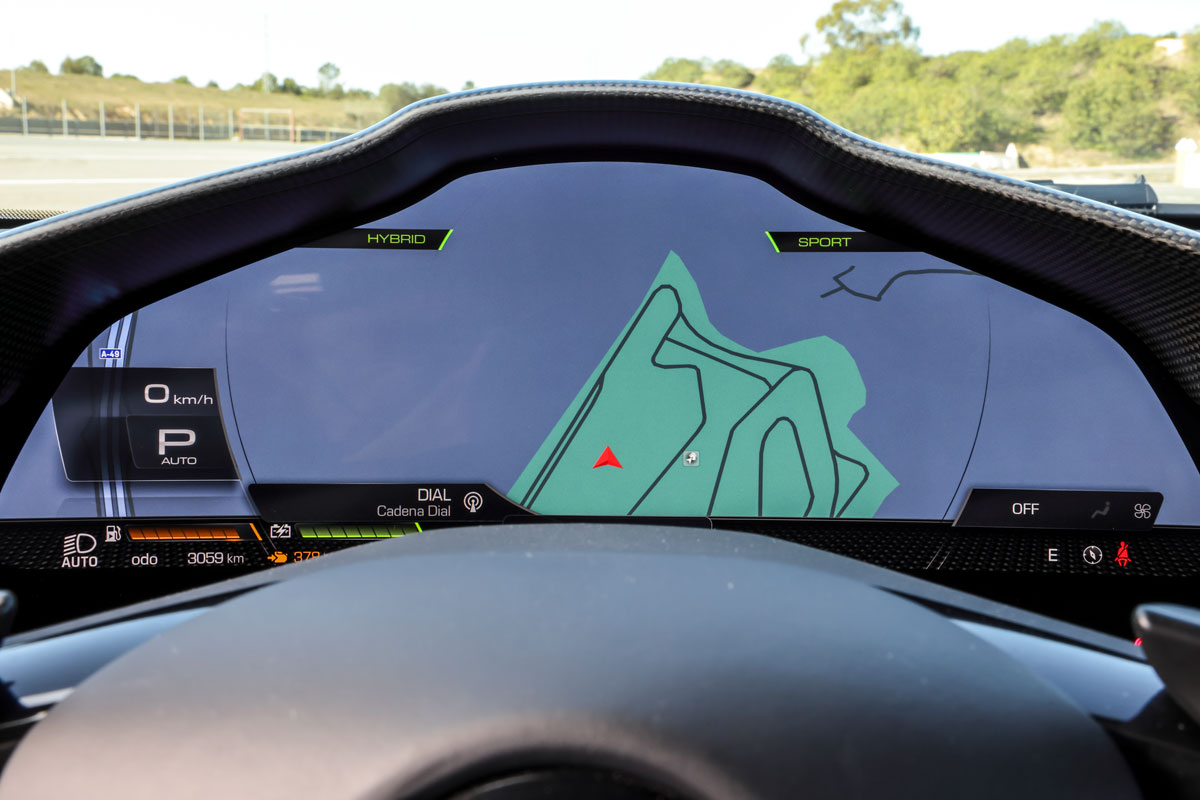 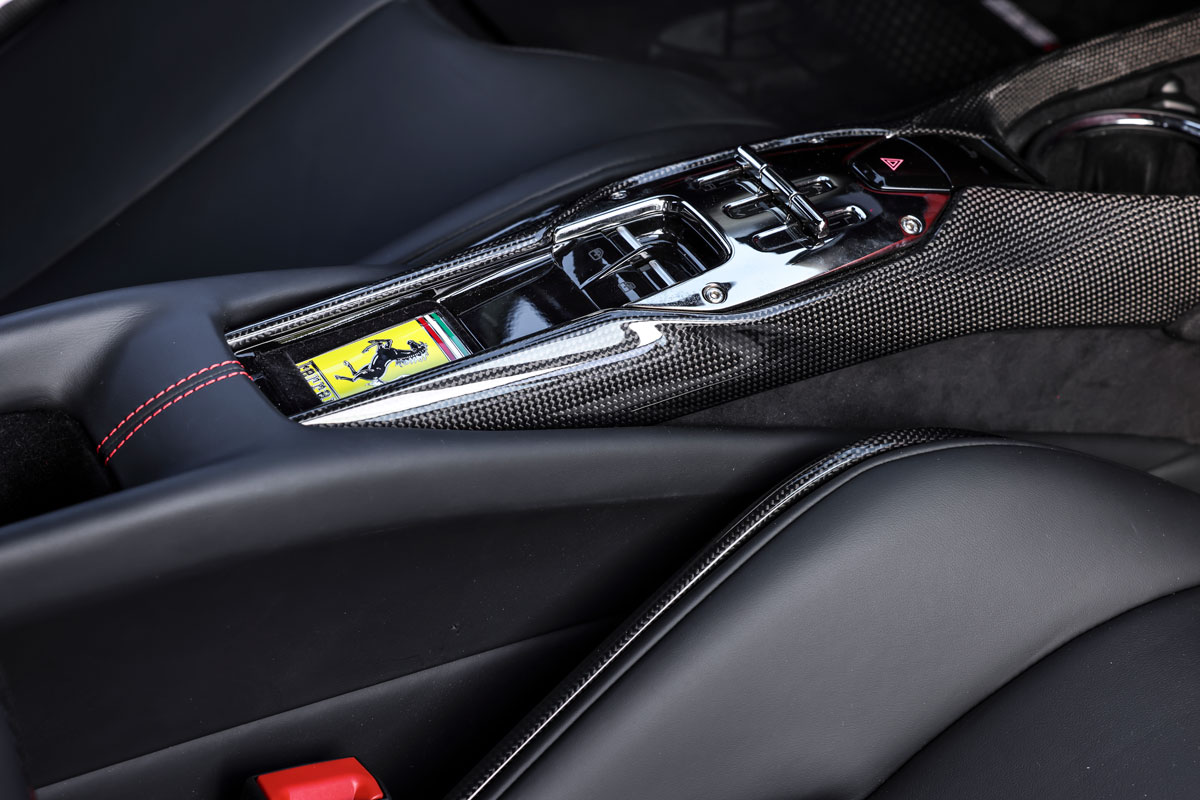 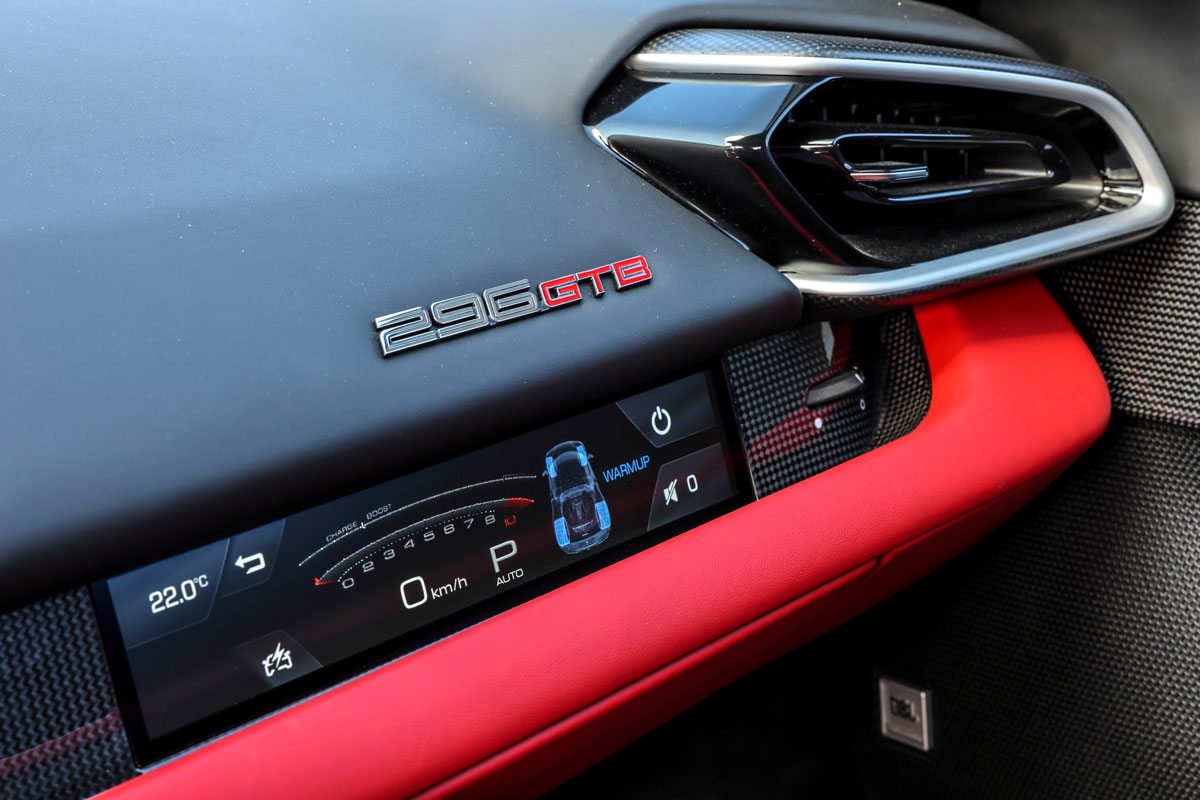 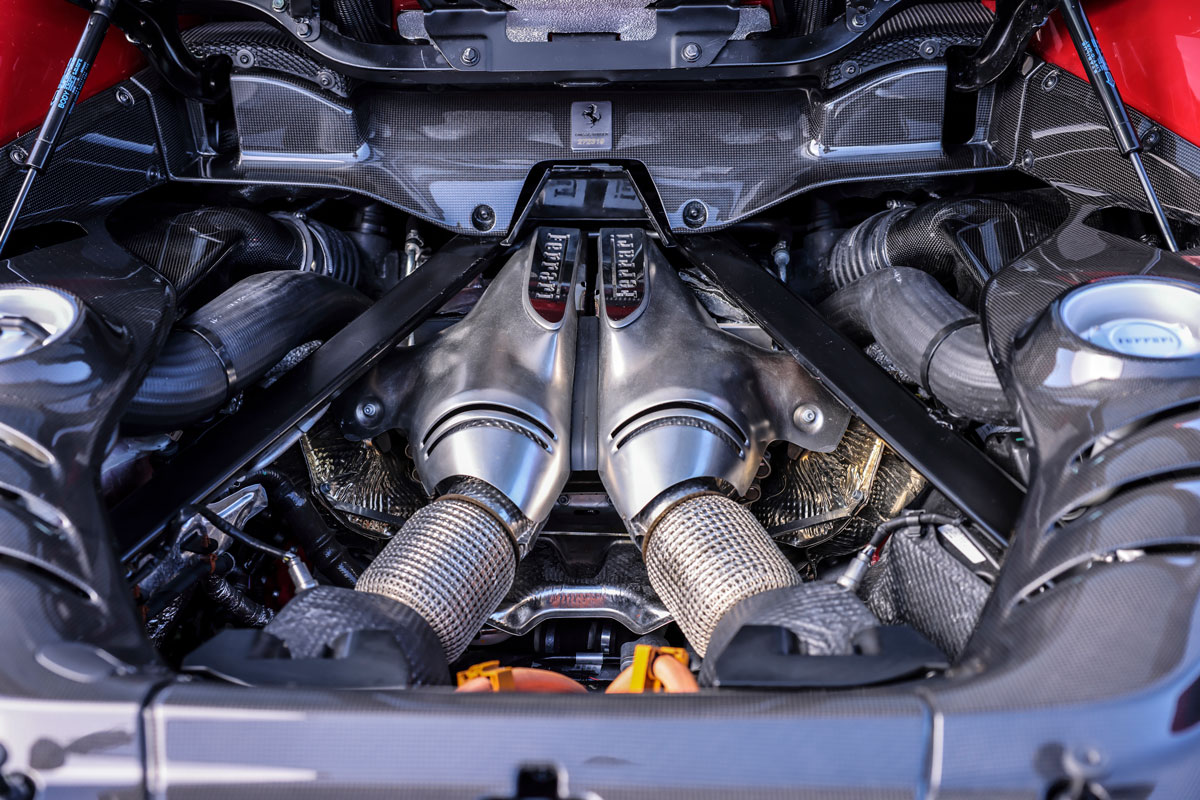 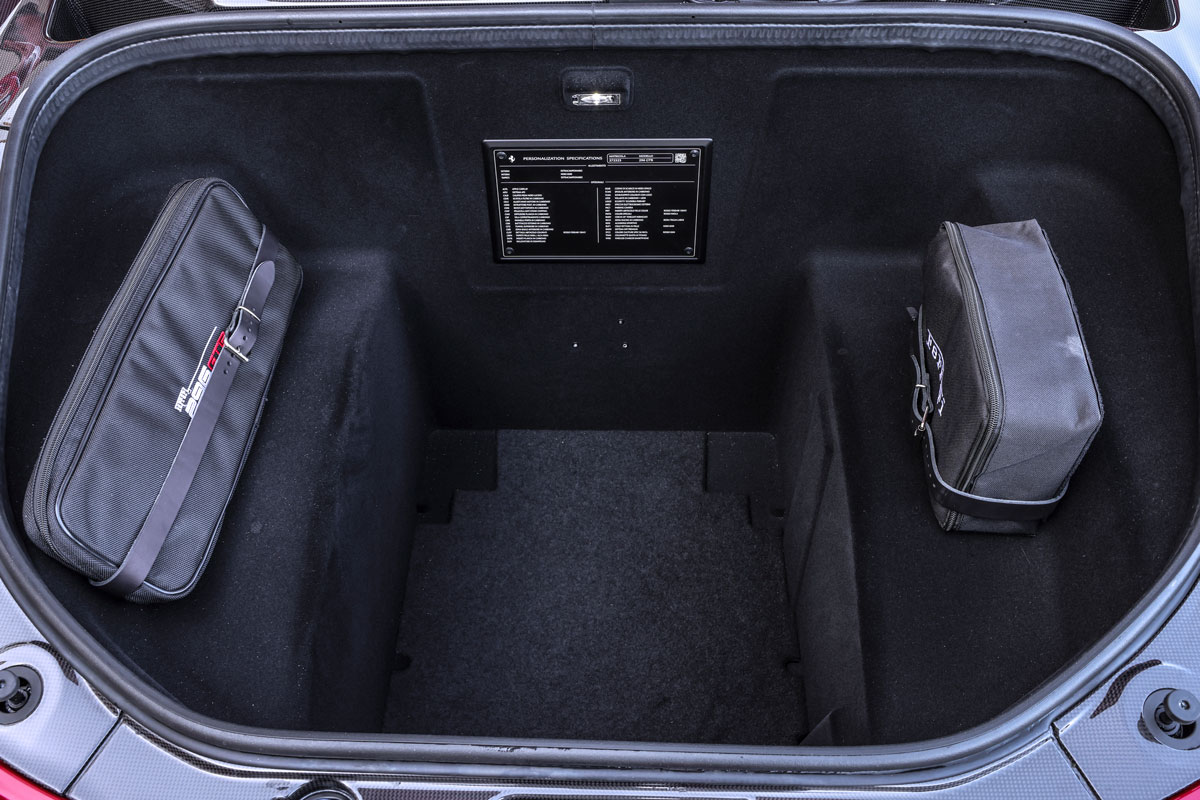 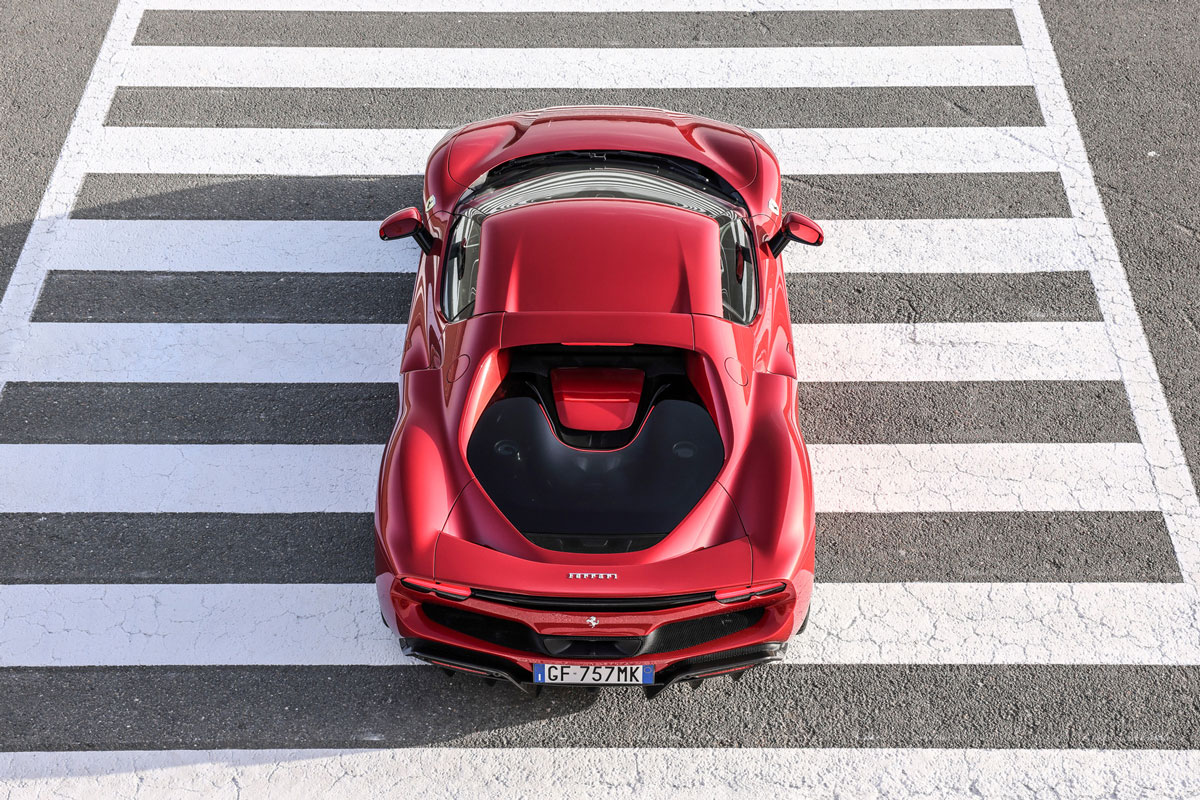 If that price still sounds a lot, keep in mind that you’re effectively getting two Ferraris in one svelte, sexy package: a mid-engined V6 monster that somehow manages to snarl like a V12, with an electric-powered, silent-running supercar wedged inside it.

Obviously this is a lot to take in and explain, so after flying 32 hours to the launch of the new car in Spain, Ferrari locked us in a room and subjected us to a presentation so long that it had an intermission and drinks break in the middle.

As a result, I can tell you that the 3.0-litre engine in the 296 GTB is the first V6 Ferrari has ever made, and that by combining it with a single electric motor it creates more power than the company’s V8-powered F8 Tributo – 80 kilowatts more, in fact – and even 22 kilowatts more than its titanic 6.5-litre V12 engine. In total, it makes a simply incredible 610 kilowatts, plus 740 Newton metres, and it can happily spin to 8,500 rotations per minute, while its very loud twin turbochargers go all the way up to 180,000 rotations per minute.

By the time we were finally allowed to drive this intimidating machine, my eyeballs were throbbing with jet lag and it was raining – hard. Attempting to drive a vehicle with significantly more power than the V8 supercars they race at Bathurst and the ability to get from 0 to 200 kilometres per hour in 7.3 seconds (the 100 kilometres per hour mark disappears in 2.9) on the wrong side of the road really did have the same effect on my nervous system as an intravenous injection of Red Bull.

The first step was working out how to operate the Ferrari plug-in hybrid electric vehicle, which fortunately, someone had already charged up for me. The 296 GTB starts up in eDrive mode, which means it’s totally silent and produces zero emissions, although it will only travel 25 kilometres in that mode.

There’s a happy little Blade Runner-esque zing sound when you push the Start button which, when you’re used to Ferraris starting with an angry devil’s fart, is as shocking as hearing Pauline Hanson speaking like Theresa May or, better yet, staying entirely silent. I made it about five kilometres, in the name of science, before being utterly weirded out by the experience of driving a silent Ferrari.

“The more you drive it, the faster you get, and the more you find yourself laughing out loud with sheer exhilaration.”

Fortunately, once you exceed the 135 kilometres per hour mark – a very common cruising speed on Spanish motorways where the notional limit is a sensible 120 kilometres per hour – the truly incredible engine starts doing its thing anyway. While it is impressive that you can drive the 296 GTB in electric mode, and that theoretically could commute to work and back without producing any CO2 at all, I have calculated that exactly four-fifths of no-one will ever do so.

That’s because the temptations of unleashing the combined power of the electric powertrain and the V6 engine are just too great, and the rewards for doing so too memorable. You can choose Hybrid mode, which lets the Ferrari decide which motive force is best for your needs, or you can switch to Performance, where things get really wild. Beyond that is a Qualifying mode which guarantees maximum madness and is best used only by people with forearms like Popeye.

The genius of this car is that it gives you the low-down, instantaneous torque shove of an electric car at the very same time as it delivers all the old-school, internal-combustion screaming power that Ferrari has long mastered.

Luckily, for the soggy first hour of our time together I was mainly on freeways, where I amused myself by using the gearbox as a musical instrument. I had enormous doubts that any V6 engine could sound like a proper Ferrari, but the powertrain people insisted, during the world’s longest briefing, that they had come up with a way to give it the deep, kidney-vibrating resonance of a V12 – so much so that its own engineers referred to it as “the piccolo V12”.

Truly, they have worked magic here because its sonic boomings are outrageously delightful, and revving up and down the range, particularly in a tunnel, sounds like you are playing with the brass section of some berserk motoring orchestra.

I can’t tell you how relieved I was when the weather started to dry out just as I hit a winding section of road that will, I promise you, stay with me forever. Finally able to push the 296 GTB just a little, I was overcome with a mix of surprise, elation and adrenaline. This car is lighter, lower and smaller than the F8 Tributo, and introduces a new steering system that will now become the benchmark for all Ferraris. It is so sharp, so instantaneous and so rewarding that I would rate it an easy 11 out of 10.

Then there’s the absolutely absurd power delivery, the downforce (some 350 kilograms of it at 250 kilometres per hour, apparently), the superlative gearbox and the grip. There’s also an incredible amount of computing power being applied to keep you from launching into space, or off the side of a mountain, because getting in excess of 600 kilowatts to the ground through the rear wheels alone shouldn’t be this easy.

Thoughts at 270 kilometres per hour

And that’s the incredible thing about the 296 GTB: it is astonishingly easy, and encouraging, to drive very, very fast. Indeed, it’s so capable, so instantly in tune with your inputs, so eager to turn in and to fire you out of bends, that you really have to be flying to properly appreciate what it can do.

Driving a Ferrari is always a lot of fun and each of its mid-engined supercars is usually just a bit more impressive than the one before it, but the 296 GTB is a giant leap ahead of the F8 Tributo. And if it signals the end of V8 engines, I have no problem with that because it’s just better – in every way.

Indeed, while I have always admired Ferraris, I have never wanted one before, but I would desperately love to own a 296 GTB. And not just because I’d never have to feel jet-lagged again.

Read next: Ferrari Roma is a glimpse into the future of understated luxury