“It’s not a job, it’s my life”: Ferrari CEO shares life in the fast lane

With drive in his DNA, success in his blood and passion in his heart, the CEO of Ferrari Australasia, Herbert Appleroth, doesn’t just love the brand he runs, he lives it. 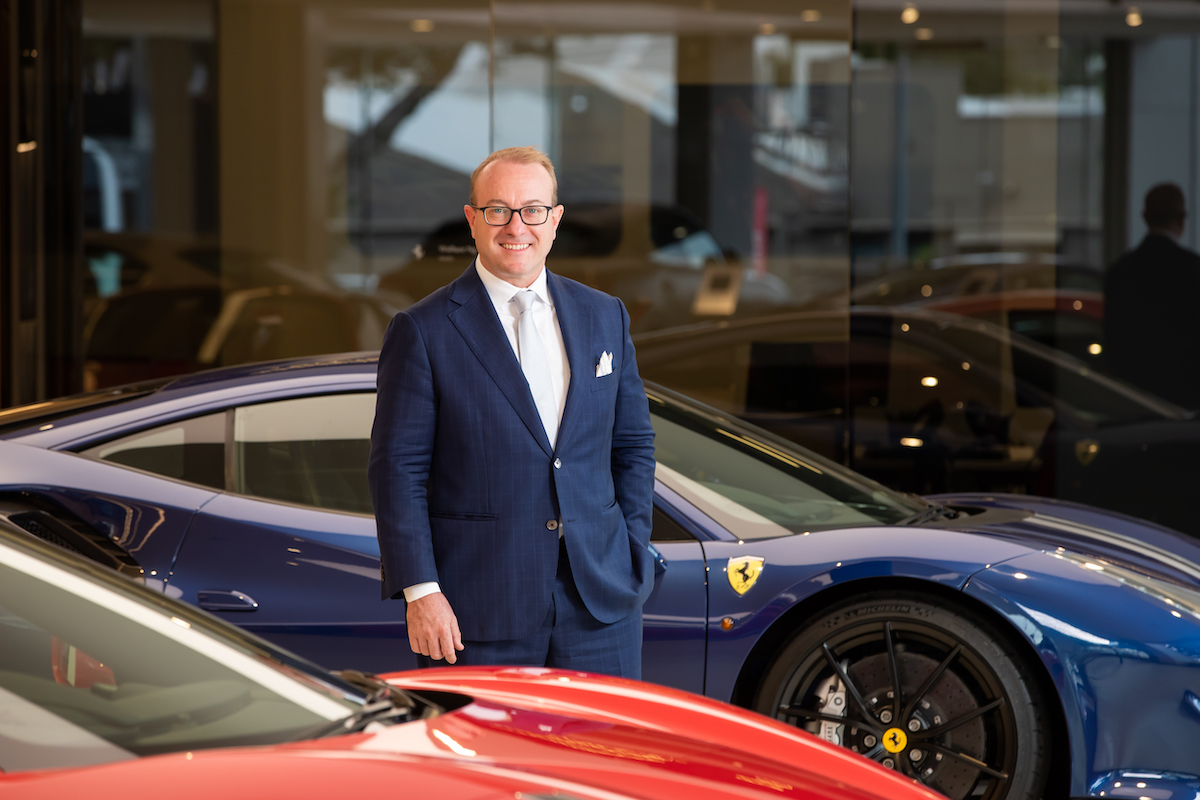 It’s a warm autumn morning in Freshwater, on Sydney’s Northern Beaches, and I’m sitting in a silver Ferrari 488 Pista. As you do. I surreptitiously glance over at my fellow driver as he checks his phone one last time, before adjusting the rear-view mirror. He starts the engine and the hairs on the back of my neck tingle. He looks over at me; “Are we ready?” he asks.

I don’t think there’s a more appropriate place to interview Herbert Appleroth, the CEO of Ferrari Australasia, than here, behind the wheel of his beloved marque.

As he effortlessly navigates the traffic and expertly answers my questions – all the while oblivious to the beeps and stares a car like this leaves in its wake – it becomes very apparent, very quickly, that this isn’t just what Herbert does – Ferrari is part of who he is.

“We’re always looking to the future. Ferrari is a formula 1 team that happens to sell road cars and, just like motor racing, if you’re standing still, you’re going backwards.”

“I know how blessed I am,” he says matter-of-factly. “I wake up every day and acknowledge the fact that I love to go to work. It’s my dream job, my passion. And still, at 46, to be able to do this… It’s why, every morning, I make a conscious effort to put myself in the shoes of the consumer. It’s how I ensure we continue to be a customer-focused company. The thing is, I was a Ferrari driver before I worked for the brand. I bought my first Ferrari when I was 26, before I even owned a home, so I have an advantage; I understand what it’s like to be a customer.”

It’s with this kind of knowledge that money just can’t buy (or perhaps only can buy?), that Herbert has led Ferrari Australasia to be a shining example of excellence for the brand.

Not only has his region won Best Marketplace for the past five years but it also has the highest percentage of new-to-Ferrari owners globally.

“Nothing makes me prouder than when the regions I represent have some of the biggest results. We have the highest customer satisfaction rate in the world. The highest percentage of female ownership in the world. More than 50% of our sales are new-to-Ferrari people. You know what that means? Our customers, our clients, our family members are promoting us to their friends. And they’re saying, ‘Come join the Ferrari family, you’ll have the best experience’. It’s really not about the car – we’re a luxury brand whose product happens to be cars but we’re so much more. We have the best brand in the world but it’s actually the experiences that keep people coming back. We’ve created a family.” 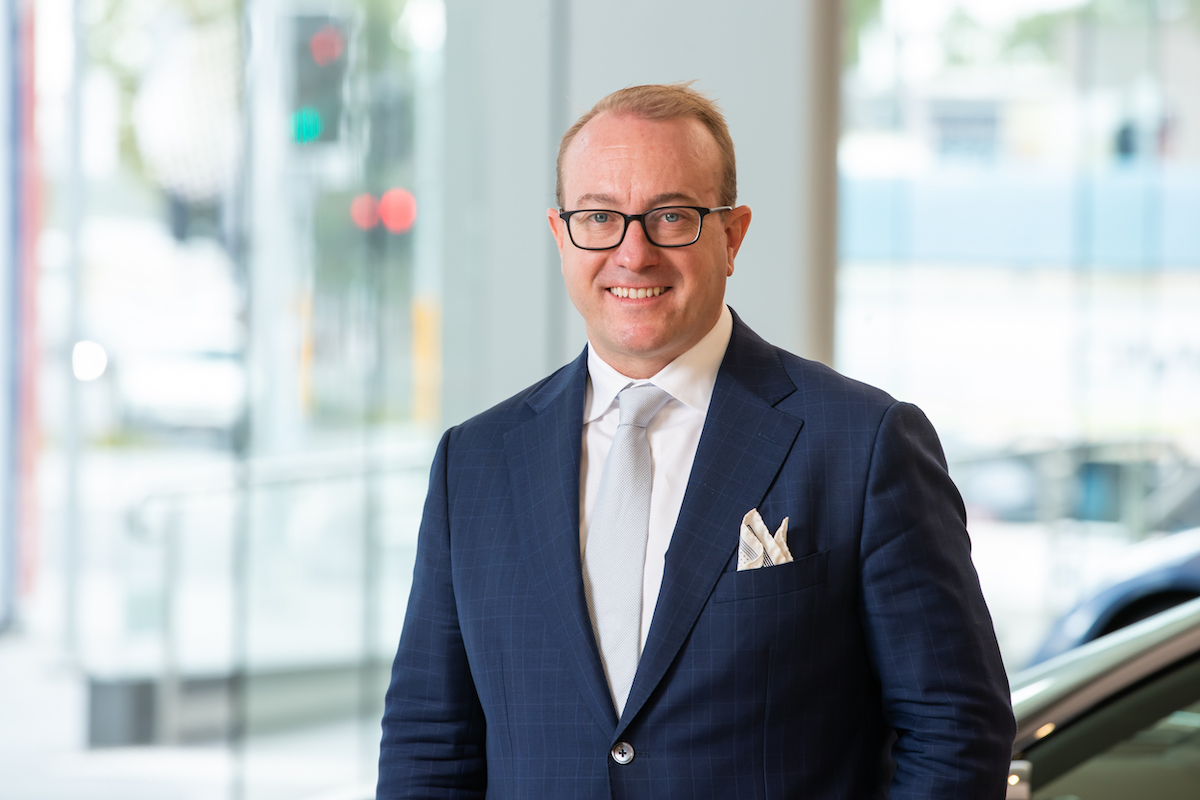 “This isn’t just a job for me, it’s my life, it’s in my heart. I measure my success by the delight on customers’ faces after an event we’ve organised; when they invite me to their 50th birthday party, which they’ve decided to hold in a Ferrari showroom, or to their wedding. It’s really just the way I hear people talk about the brand and the family. I find it incredibly rewarding.”

It can’t be all fun and games, though. Surely, with so much success, there must come some sacrifice? “Unfortunately my personal life has come a distant second or third to my professional life in the past, but I’m trying to change that. I’m learning from my mistakes and making better choices. Don’t get me wrong – it can be tough. I have a drive in me that’s built into my DNA – it’s from my parents and my grandparents – and there’s a sense of winning that’s always been inside me. I still run at 120% and challenge myself every day.”

Ferrari is simply the best

He also holds his team to these exacting standards, admitting that he’s probably not the easiest of bosses to work for.

“It’s because I expect the very best; just like my clients do. Ferrari customers only want the best, so of course it means that our team must continue to perform. We’re always looking to the future. Ferrari is a Formula 1 team that also happens to sell road cars and, just like motor racing, if you’re standing still, you’re going backwards.” This drive to be the very best has meant that Herbert has enjoyed huge success throughout the years and in his many roles in the luxury car industry.

Beginning his journey with Ferrari and Maserati as General Manager of the Australasian operations of Maserati in 1999, he successfully relaunched the brand and made Maserati the fastest-growing car company in Australia for three years.

He was appointed as General Manager of Ferrari operations as well, where he set record sales, year after year.

In 2005, he accepted the position of Global Marketing Director for Maserati in Modena, Italy.

During his time there, the company achieved record sales results globally and returned the famous Trident brand to profitability.

Five years later, he returned to Ferrari to head the Japanese subsidiary before being appointed President and CEO of Ferrari Asia Pacific in 2011, then Ferrari Australasia in 2013.

“Yes, I’ve had some really different roles all over the world, and I’ve had to change and assimilate my management style accordingly. Running an international marketing team based in a regional town in Italy is very different to working in Japan. It’s very challenging. Listening is essential – you were born with two ears and one mouth and you need to use them in that ratio – and everyone’s voice is important. Patience is also crucial – you can’t react from the hip. When I moved from Italy to Japan, I couldn’t just arrive and expect to change everything instantly, I had to understand the culture, educate myself then make decisions from there.

“The thing is, I tend to lead from the front. A former boss once said that perhaps I run a little too fast and can leave my team behind. He said that it’s almost like a scene from Braveheart – I’ve got the warpaint on and I’m ready for battle, I say ‘charge’ and race to the front line, but I turn around and my team haven’t been able to keep up. I’m conscious now of not running too fast and just making sure that I take a breather every now and then.”

So, how does the CEO of Ferrari Australasia stop and take a breath?

“When I’m in Sydney, I go to the gym for an hour every lunchtime. Not only does it break up the day, it lets all the tension out. Incorporating an element of physicality into my day has been amazing – it’s made me far less impatient and a lot more appreciative.

“I mean, who would have ever thought… I’ve travelled the world, met the most incredible people, had the most amazing experiences, worked for the greatest brands, then I end up back as a CEO in my own marketplace – I mean, it’s unheard of. I’m the only CEO in our company who’s actually in their own market. I’m a fatalist in a lot of ways; I ended up exactly where I wanted to be. I’ve got a lot of years to go, hopefully. But who knows what the future holds, we’ll just have to wait and see.”

Your favourite quote?
“Kerry Packer once said, ‘Always under promise and over deliver.’ I do that, not just in work but in life.”

The biggest assumption that people make about you?
“That I’ve got an easy job.”

The one invention that would improve your life?
“The 25th hour of the day. I would love that clock.”

Who would you like to be stuck in an elevator with?
“My dad because he’s not here anymore.”

If you could rewind 20 years, what would you do differently?
“I don’t think I would want to do anything differently. You make mistakes but you learn from them. Everyone has regrets but I wouldn’t change anything. I consider myself pretty lucky.”

The most extravagant thing you ever bought?
“A Richard Mille watch. It’s not the most expensive thing I’ve bought, but it’s the most extravagant because I treated myself. I still turn to that watch in special moments – it was a key time in my life and I love that I have something physical to remember it by.”

Finish these sentences:
A good day is:
“A sunny day.”

A good meeting is:
“A productive one.”

A good service is:
“A delight.”