Lamborghini’s Huracán Evo can read your mind at 325km/h

A supercomputer with a car wrapped around it, the Lamborghini Huracán Evo not only hurls you into the future but predicts it too. 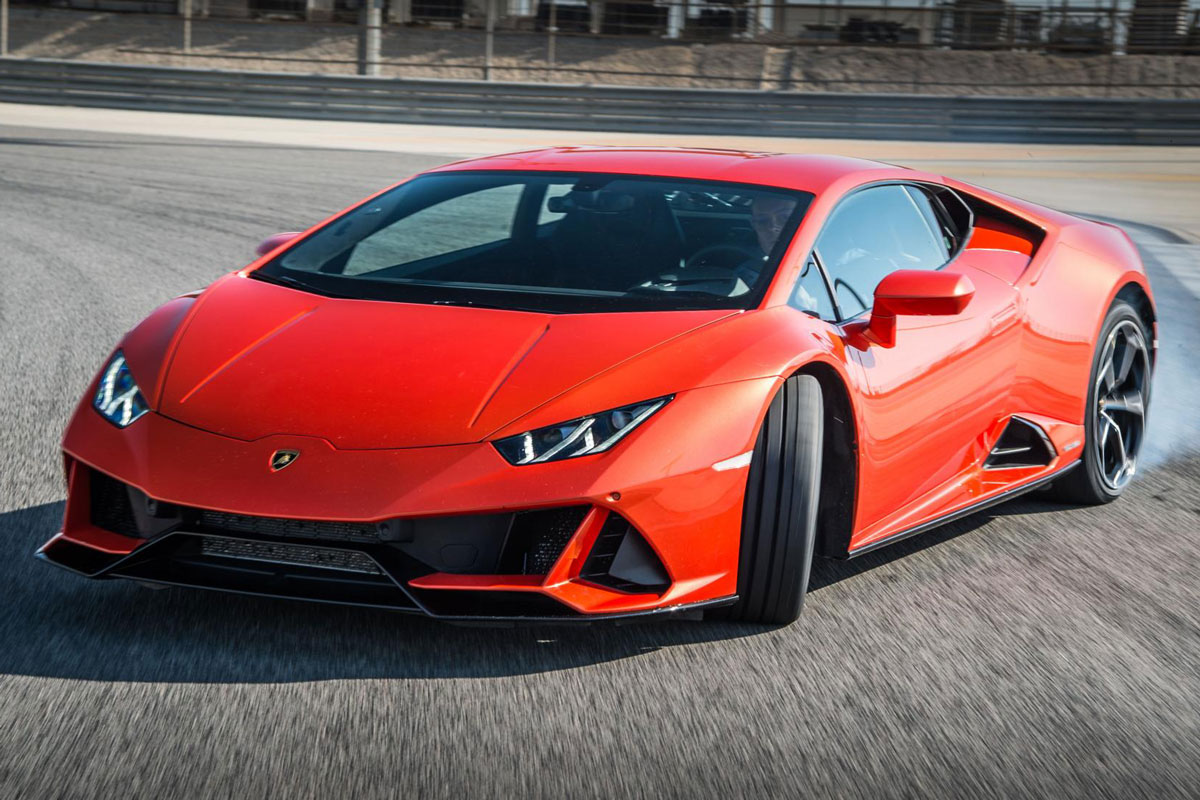 It is not unusual, when driving a supercar, to feel intimidated to the point where you break out in a nervous sweat and question whether you should have worn incontinence pants, but it is a new wrinkle to feel intellectually intimidated by one.

Frankly, my head started to hurt before I even got into the ridiculous new Lamborghini Huracán Evo, a car that doesn’t just hurl you into your immediate future, but is so smart it can, allegedly, predict what will happen when you get there.

Just reading about it was intimidating, because aside from the tech-trickery, this new model is allegedly seven times more aerodynamically efficient, which made me fear for my internal organs.

To be frank, this vehicle’s new “brain” sounds like something experimental, ripped from the pages of New Scientist, and no doubt it would have even Brian Cox scratching his giant head, but Lamborghini claims its new car uses something called “feed-forward logic” to predict what you, the dim-witted driver, are about to do.

A brain bigger than yours 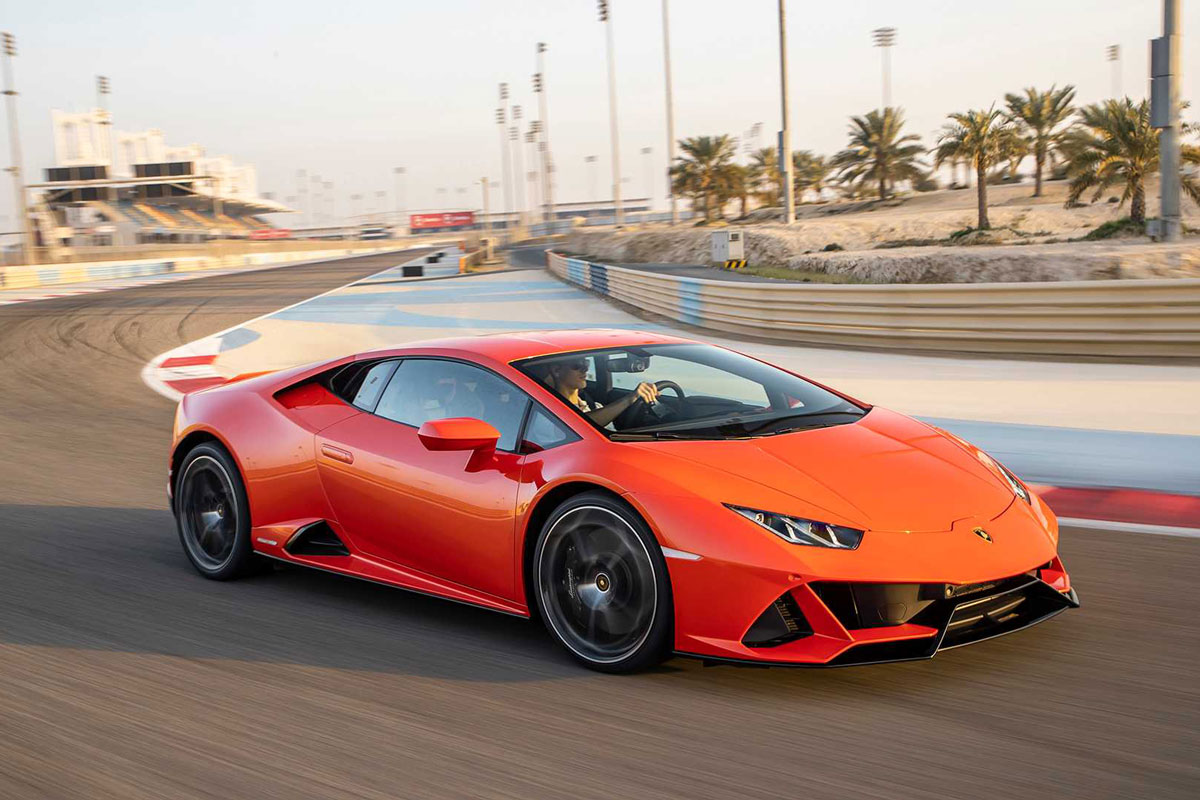 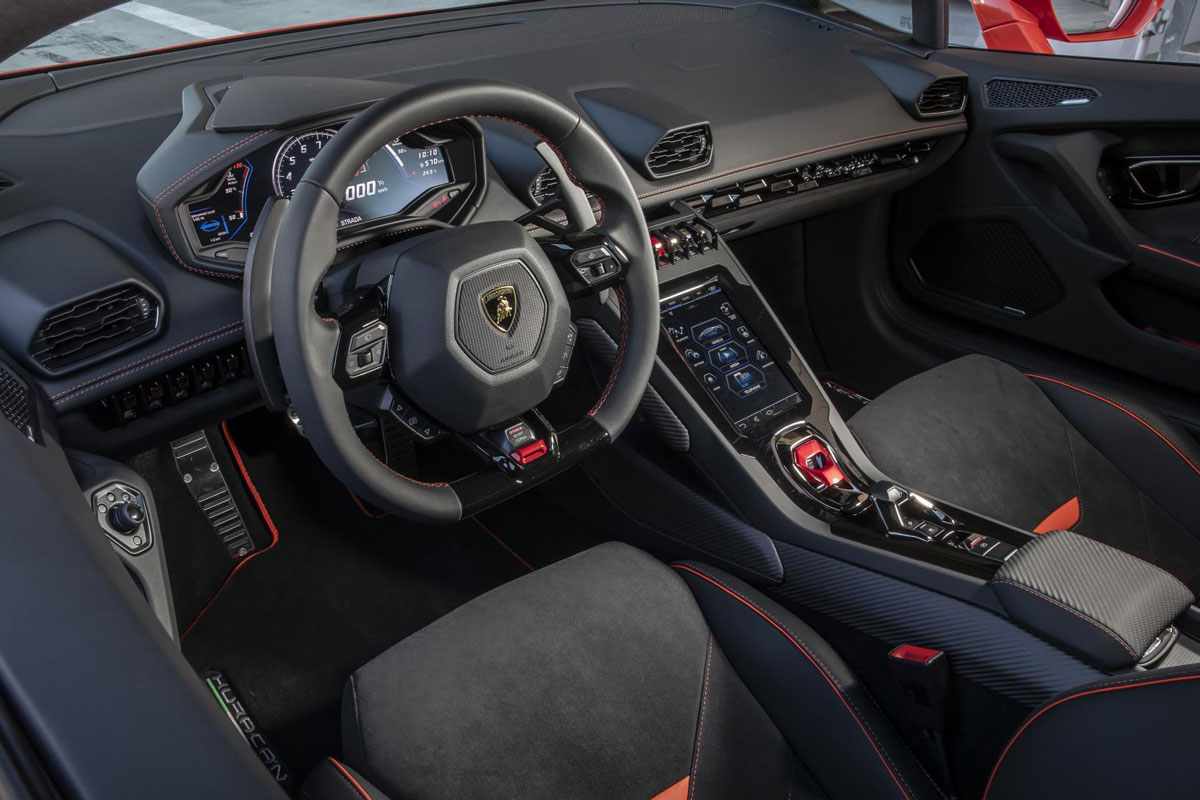 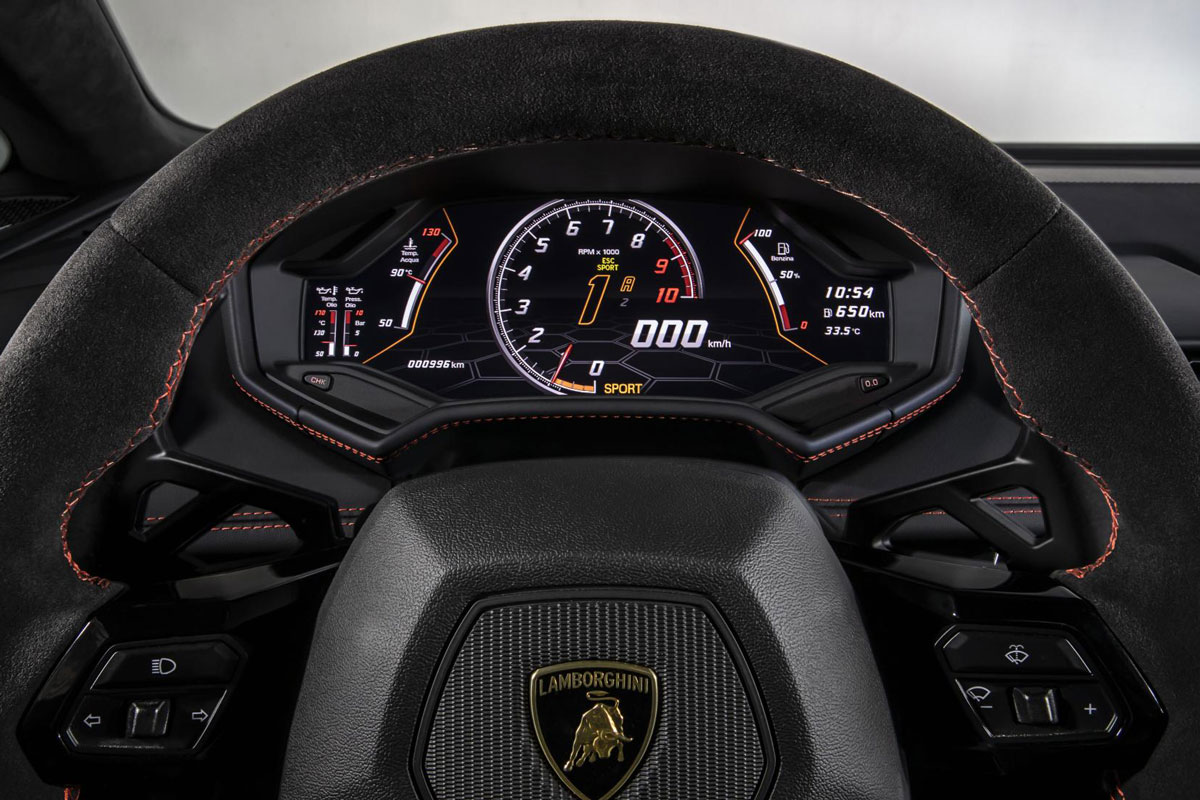 The central supercar supercomputer that performs these feats carries the grand title of Lamborghini Dinamica Veicolo Integrata, and essentially its job is to measure zillions of inputs from the car’s gyroscopes, four-wheel-steering systems, traction sensors and so on and use them, not merely to react to your inputs and keep you on the road – lots of cars can do that – but to “predict the best driving set-up for the next moment”.

As one Lamborghini staffer described it to me, sotto voce, “Basically, it can read your mind – it must be a woman, yes?”

The way in which the car will pre-act to things you’ve not even thought to do yet is also variable, depending on whether you’ve chosen to drive in Street, Sport or Race mode.

Stepping up through each of those levels of insanity also noticeably increases the volume of the car’s already very shouty twin exhausts (which have been raised up to a more eye-line position, just like a on a race car, for better aero, and because it looks cooler). 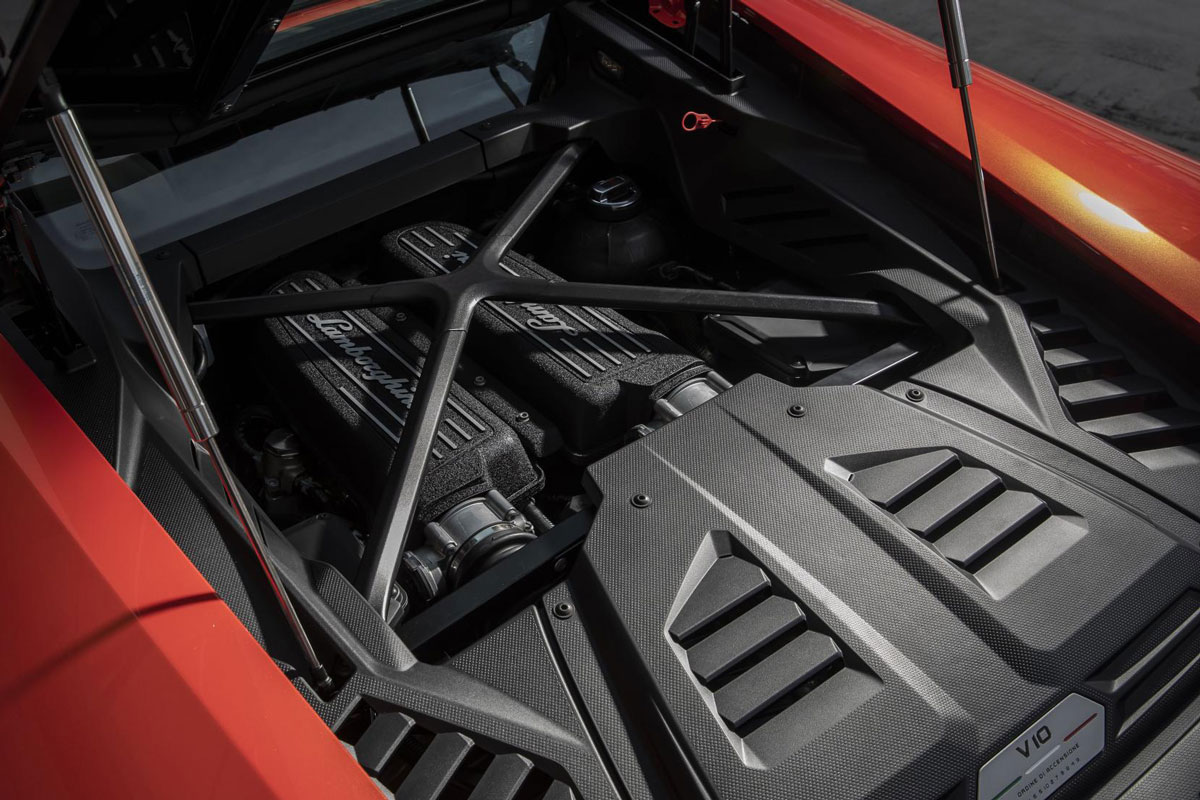 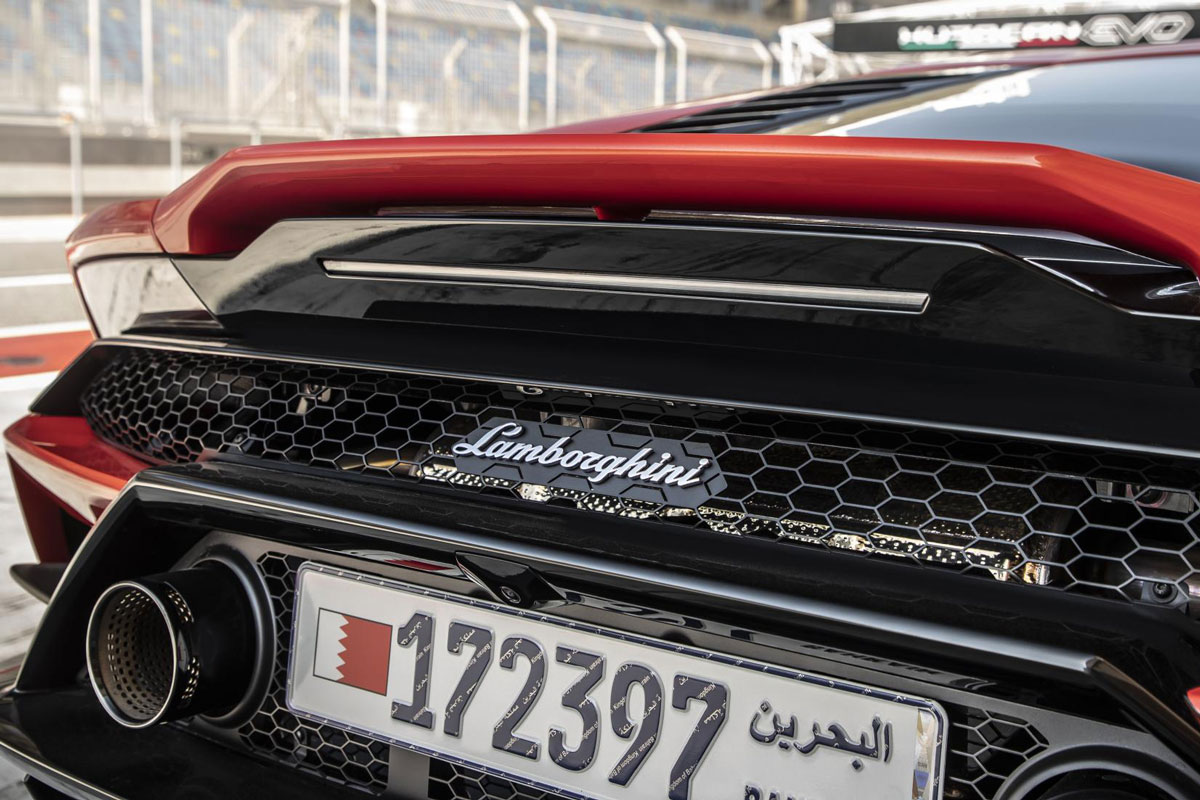 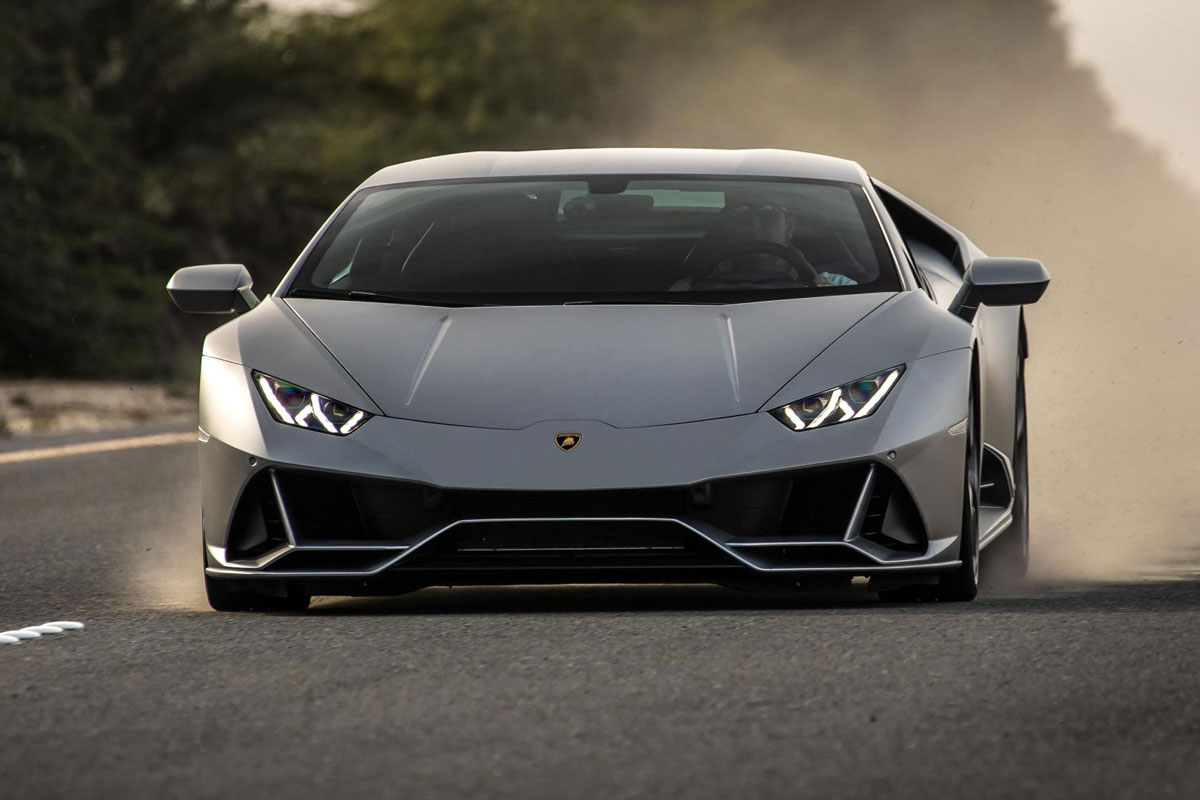 It’s hardly surprising that a 5.2-litre V10 Lamborghini engine would be noisy, of course, because any machine that can produce 470kW and 600Nm is going to be making a lot of fuel explode, with plenty of bangs and thunderclaps, every time you put your foot down.

While the changes to the exterior are largely subtle and clever, with just a touch of testosterone here and there, there are a few upgrades to the interior, with touches of carbon-fibre skin, to save weight and because a combination of leather and carbon fibre just couldn’t be more Lamborghini, and lots of bright orange bits.

Most noticeably, though, there has been an attempt to catch up with competitors like McLaren and Ferrari by offering a central touch screen. Some of the time, this works quite well, but replacing a single, simple volume knob with buttons on the screen is not hugely practical.

Inside the raging bull 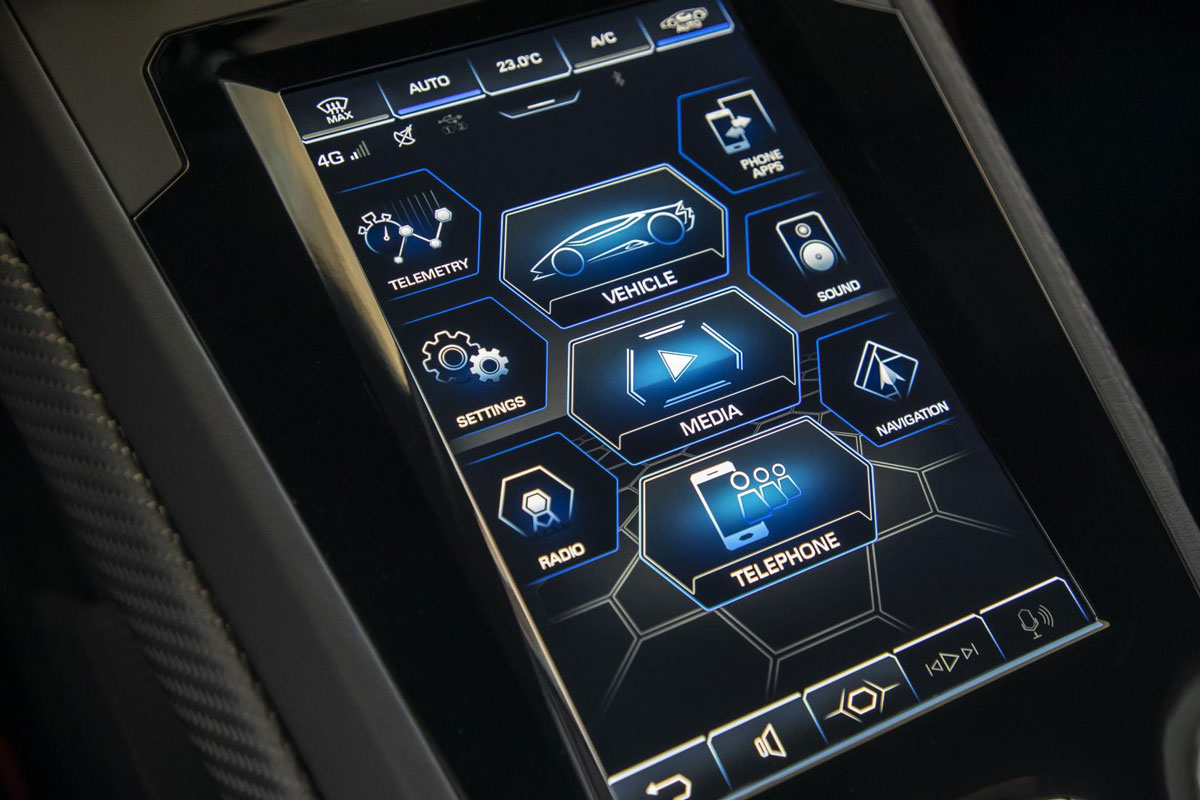 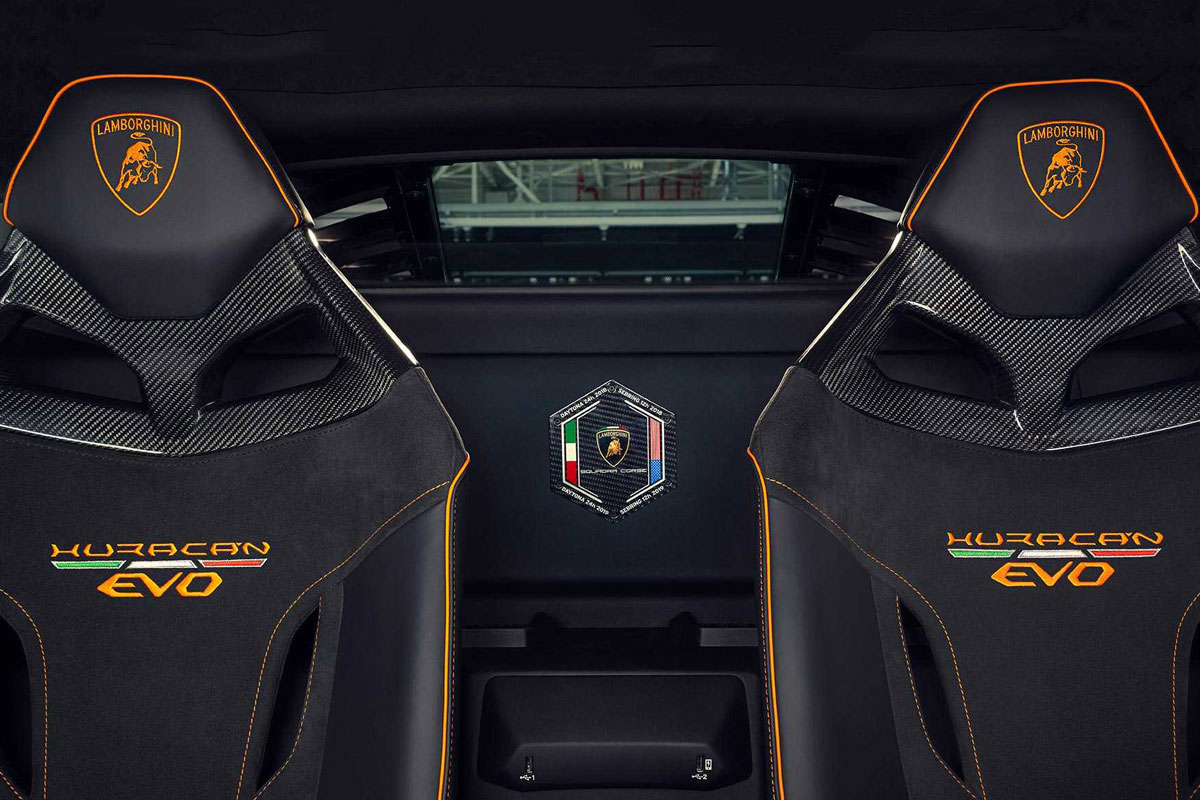 The new touch screen also offers a very F1-like telemetry option that shows you where power is going and how it’s being used, in real-time, but the idea that any driver would ever have time to look at it, when their life is flashing before their eyes almost as fast as the scenery, is surely a fantasy.

Huracán Evo owners can also now have Apple CarPlay, which comes free with just about every Hyundai and Kia these days, but Lamborghini will charge them an astonishing A$6,480 for the privilege.

Frankly, that’s still pretty cheap for a computer that can see into the future, with which they throw in the rest of the car. 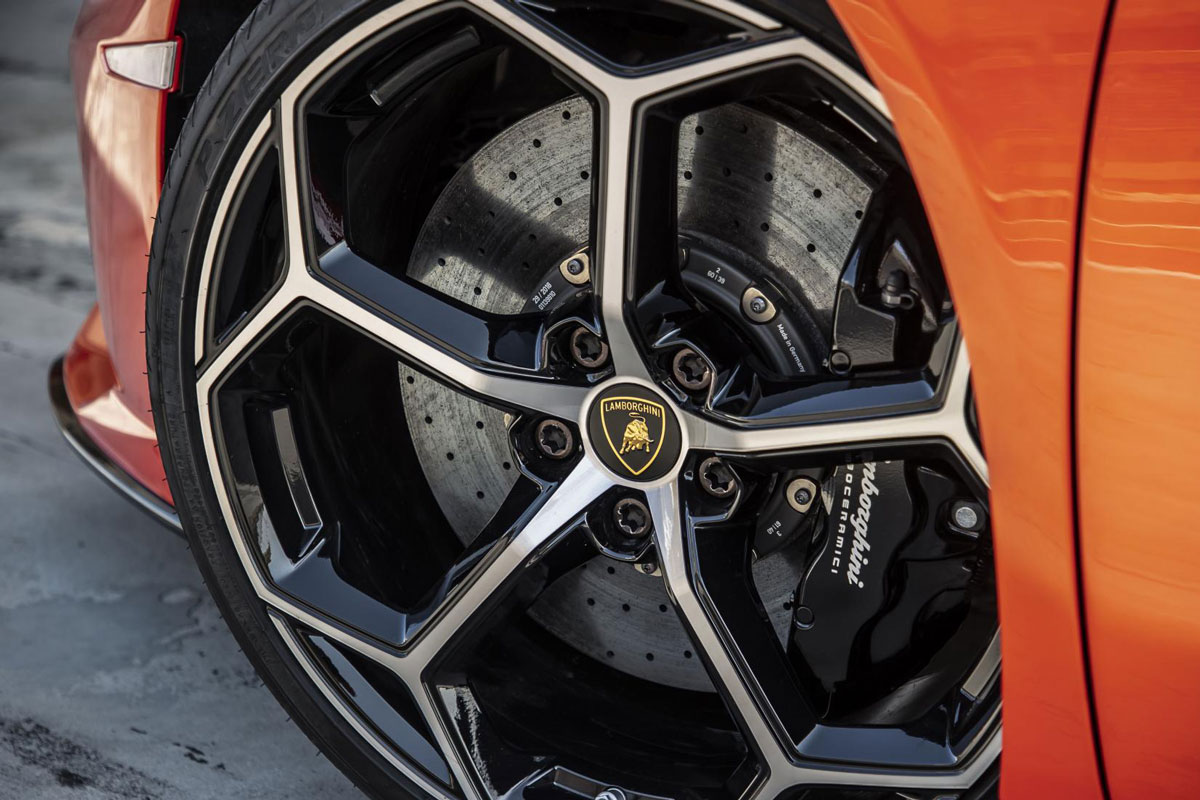 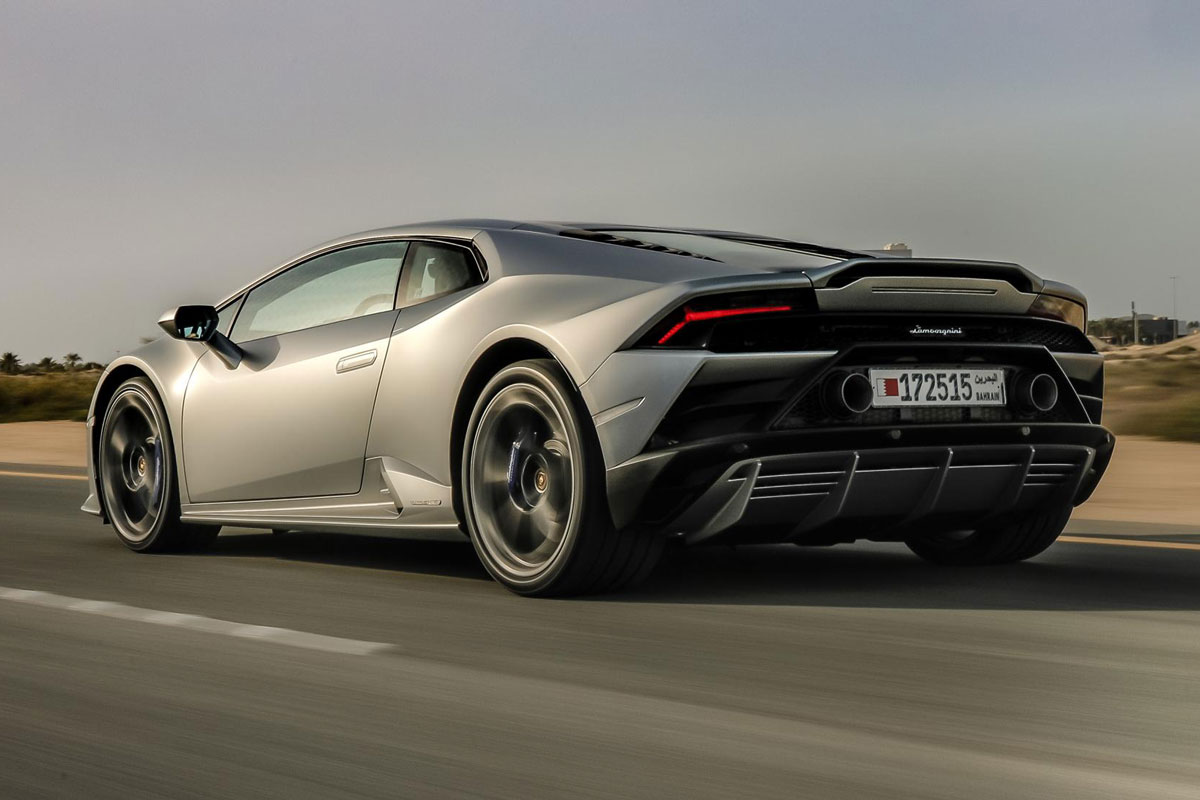 Drive this racy Evo version of the Huracán in a straight line and the experience is largely similar to other Lamborghinis – operatic, thunderous, titillating and likely to make your passenger lose the ability to speak sense.

The brakes are also just as incredible as ever, and you really do feel like you’re getting your money’s worth out of those expensive seatbelts every time you stand on them, because they have to work extra hard to keep you from flying into the steering wheel.

It is once you throw this new Huracán at a series of corners, in an attempt to establish just how fiendish the Dinamica Veicolo Integrata is in its cleverness, that things get very interesting.

Lambo boss Stefano Domenicali is a very, very unusual Italian, because he admits to being only a “super, super average driver”, and it was he who demanded the Huracán Evo be just as accessible to ordinary human beings as it is thrilling and exciting in the hands of racing drivers.

Generally speaking, supercars are not easy to drive, because you always have the feeling that a miscalculation on your part might end in fiery and ugly death. Before the invention of traction control, they very much felt like they might bite you at any moment, and while technology has made them more manageable over the years, they have still remained dangerous, scary beasts.

This new Evo, with its super-smart brain, is a different animal altogether, because it is just so precise, effortless and smooth in everything it does. There is no hint of understeer, no unexpected snap oversteer (although it will, apparently, drift sideways with greater ease than ever in Race mode, on a track) and no histrionics.

It is incredibly, punishingly quick, and yet the faster you go, the more nailed down and completely under your control it feels. Effortless is the word that comes to mind, although your brain and heart are still fizzing and whirring because of the sheer, savage sensations of speed you are experiencing.

Too smart for its own good? 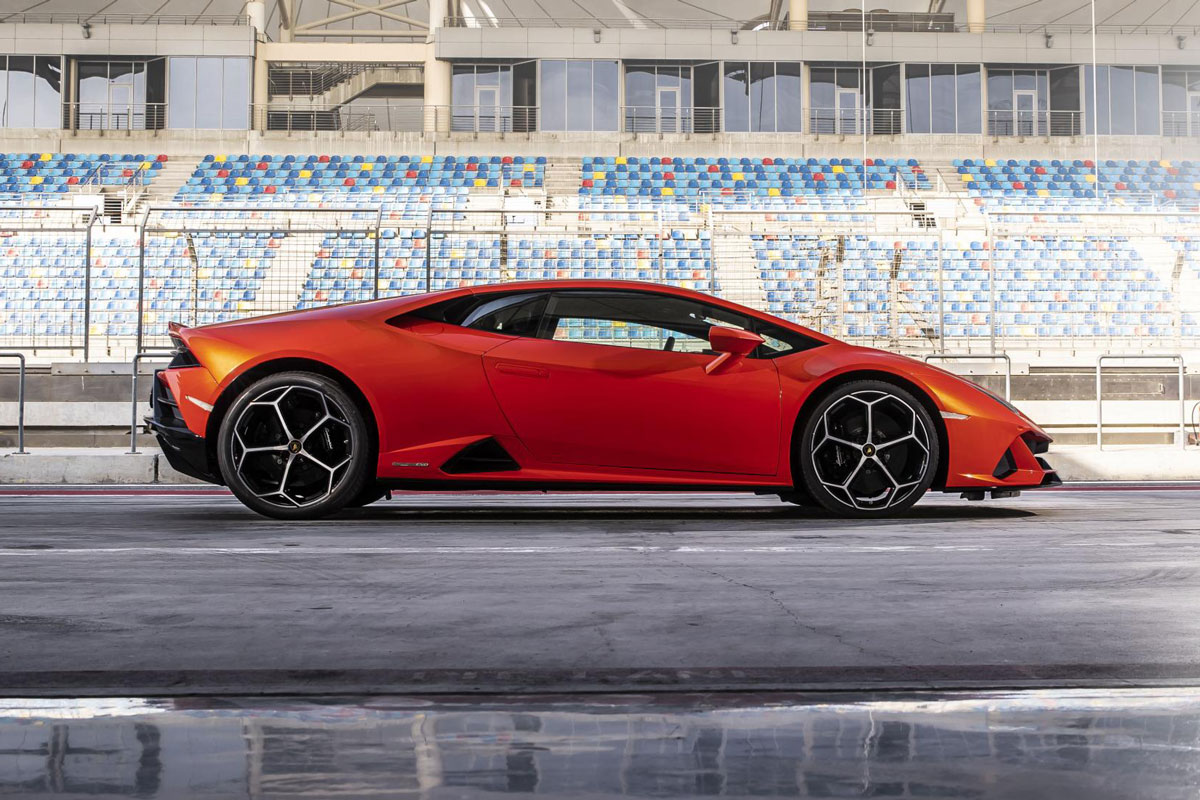 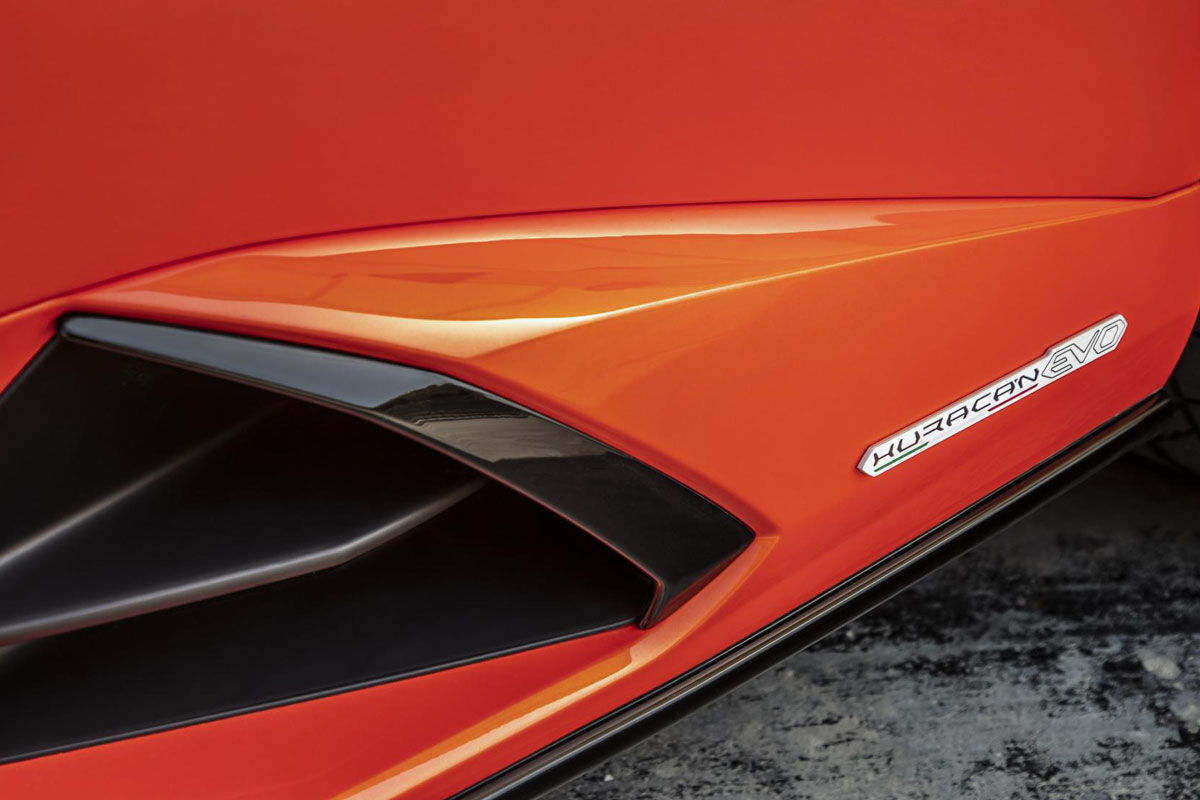 Purists will no doubt criticise it as being too digital, too easy to drive fast, but others will point to it as perhaps the most complete, and sensible, supercar the world has yet seen, because anyone who can afford one will get huge joy from it, without the hassle of feeling like they have to go and learn to be a better driver.

While it might intimidate you with its superhuman and artificial intelligence, this is perhaps the least scary, yet still terrifyingly fast, Lambo of all time.

Read next: What it’s like to drive one of the world’s fastest SUVs