Should the genuinely gargantuan "coupe crossover" be on your radar? It's impressive but you might just want to go and measure your garage first before you slap down your hard-earned cash. Take a close look at the photos of this new Audi Q8, because there’s something wrong with them.

In the pictures, as you can attest, the Q8 looks genuinely gargantuan, but when you actually see one in all its mountainous glory, you realise it’s far bigger than any photo could do justice.

Frankly, it’s a wonder that the Q8’s very existence hasn’t tilted the entire planet off its axis. Certainly, when I parked it across both the car spaces in front of my house it blocked out the sun, and made my children cry.

Its front end looks like a permanent piece of architecture and people appear genuinely surprised to find that it actually moves.

The Q8 is described as a “coupe crossover”, which is supposed to mean that it has a sleek, swooping roofline, more like a coupe than a giant SUV, but you’d have to stand a long way back to be able to see said roofline.

This Audi soft-roader is almost five metres long (4,986mm), more than two metres wide (2,190mm) and 1.7 metres tall, which is a lot of car, but you have to remember that this is basically the upwardly mobile version of the A8 limousine.

In the past, of course, people were happy to have a big, stretched vehicle like the A8, which is a wonderful luxury car, but today it doesn’t matter what size of car you’re after, it needs to look, and loom, like an SUV.

Driving the Q8 does put you way above the hoi polloi in their mortal cars, and you do look down on creation from a suitable throne. The seats aren’t just your usual comfortable pews, they’re like executive office chairs, with support all the way up to the back of your knees, which feels a little weird at first.

You also get to engage gears with the most wonderful shifter. It’s hard to explain why it’s so great, but there’s just something so right about the gear lever’s size and heft, and the fact that it feels like something Captain Kirk might have used to launch the Enterprise. 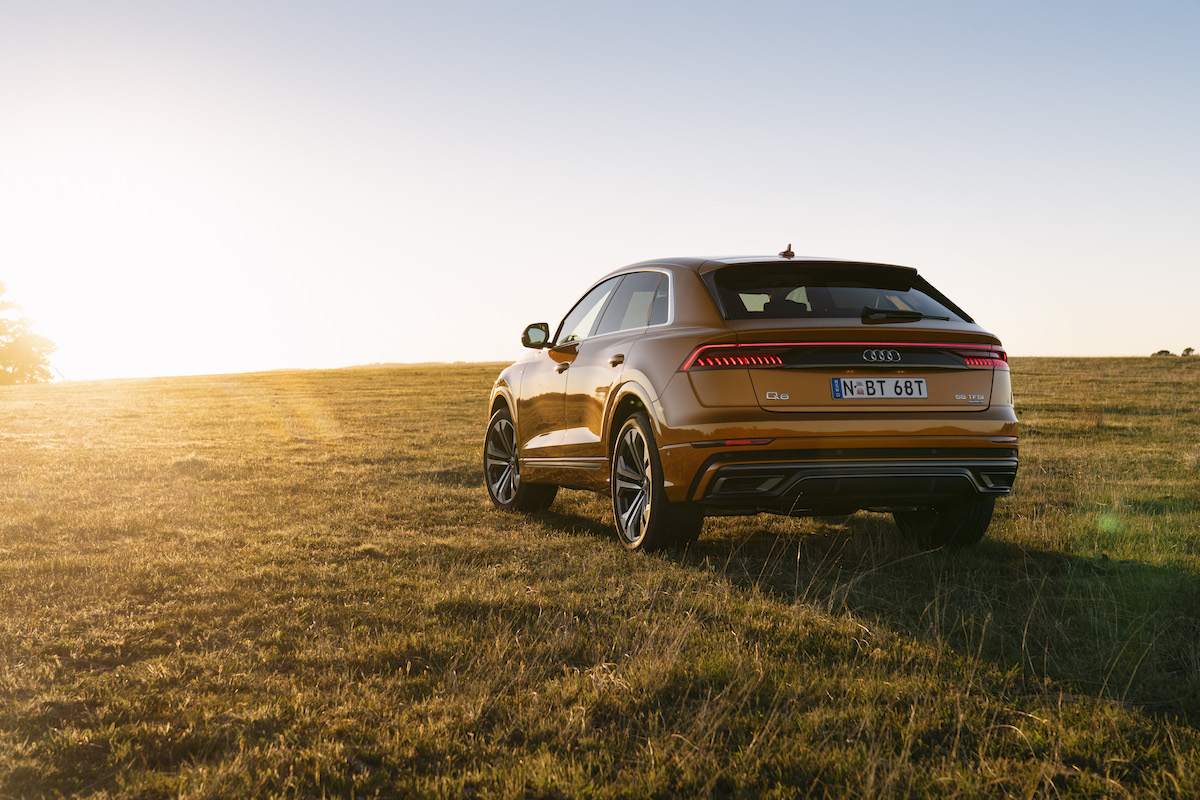 Everything about the interior feels super modern and ultra-luxe, and just about every control you require is accessed via two new haptic touch screens (which click and whir satisfyingly when you push harder), a large 8.6-inch one, and another, even bigger 10.1-inch stacked on top of that. It’s a slick system that works beautifully, and there’s even an inductive charger for your phone, which is hidden in a central storage bin, to encourage you to put the damn thing out of reach while driving.

Ah yes, driving. As you might expect, it can be quite intimidating to pilot something as big as the Q8, which rides on the sort of wheels that look too large for a city bus, yet still provides outstanding levels of ride comfort and smoothness.

It can be quite intimidating to pilot something as big as the Q8, which rides on the sort of wheels that look too large for a city bus, yet still provides outstanding levels of ride comfort and smoothness.

On the road, the Q8 feels uber effortless, with the 55 TFSI model we drove boasting a 3.0-litre petrol V6 engine that generates a suitably large 250kW of power and 500Nm of torque. It feels like you can leave the traffic behind, or surge into gaps, whenever you so desire, and a 0 to 100km/h time of 5.9 seconds tells you that this big beast is no slouch.

A clever, 48-volt mild-hybrid system also helps to keep this giant’s thirst down to a very reasonable 9.2 litres per 100 kilometres.

While the throttle pedal makes you feel masterful, the steering can leave you feeling slightly dozy, as it seems to have been set up for cruising rather than any kind of involved driving. Mind you, asking this much mass to change direction in a hurry is probably not a good idea anyway.

Still, there’s much to enjoy about rolling in the Q8, particularly if you’re lucky enough to be lounging in the very comfortable back seats.

Sadly for the driver, at some stage you’re going to have to stop and find somewhere to park your Q8, and this will be a challenge.

We were foolish enough to take our Audi into an underground multistorey car park with some very tight access ramps, which were clearly designed well before the existence of a car like the Q8 seemed plausible. There were times when I thought I might have to stay down there forever. At least I could have gone mad in comfort. 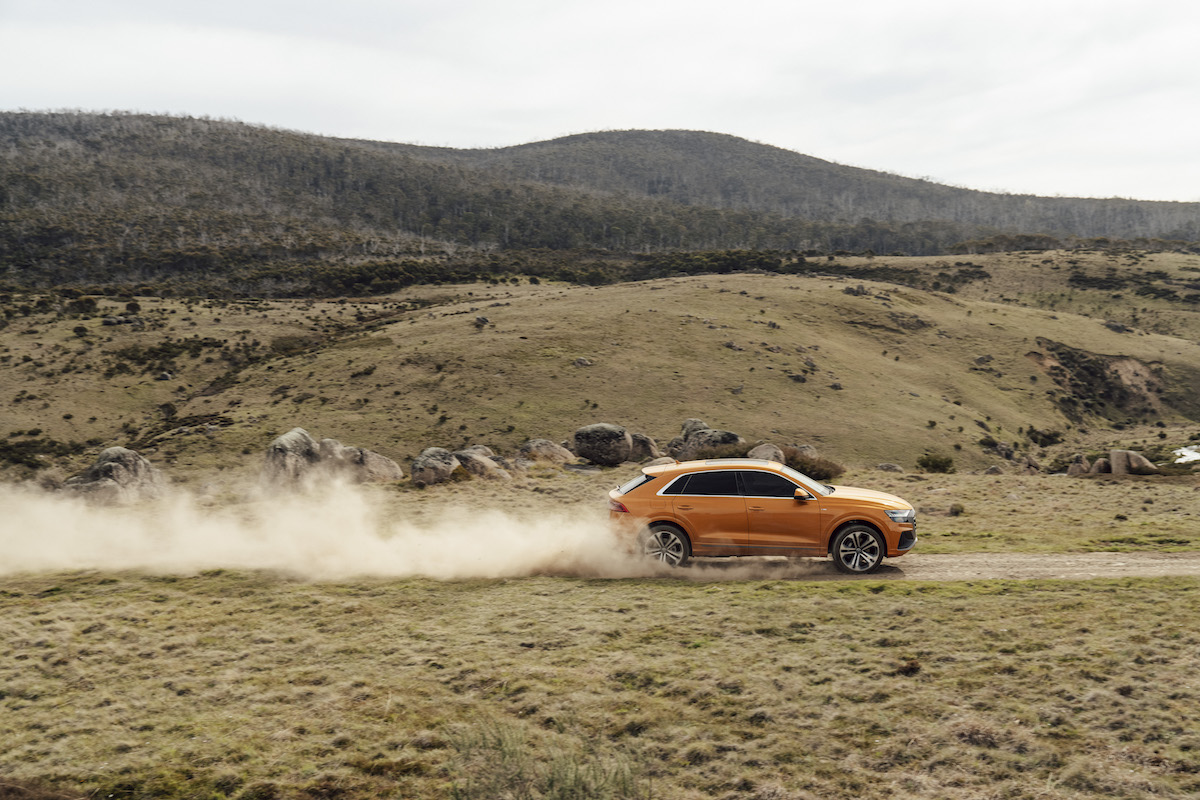 Making that kind of parking, or any kind of street parking, more stressful is the fact that the Audi has the kind of warning-beepers that have been modelled on your over-cautious grandmother. Imagine an old woman shouting at you constantly (with a high-pitched beep instead of a human voice) that “you’re getting TOO CLOSE” and you can almost picture what the Q8 is like to park.

Quite often, you’ll find both ends of the car beeping at you simultaneously, with different tones, in a kind of torturous symphony.

Once you do, finally, get your Q8 into a parking space, you can step back and admire its bulk, and consider that, if you bought cars by the metre, it would be a bit of a bargain at just A$128,900 (the same money will get you the 50 TDI diesel V6 version, if you prefer).

You might just want to go and measure your garage before you slap down your hard-earned, however.