We tested the Maserati range on Phillip Island

There’s no better thrill than a day driving Maseratis around the Phillip Island Grand Prix circuit. 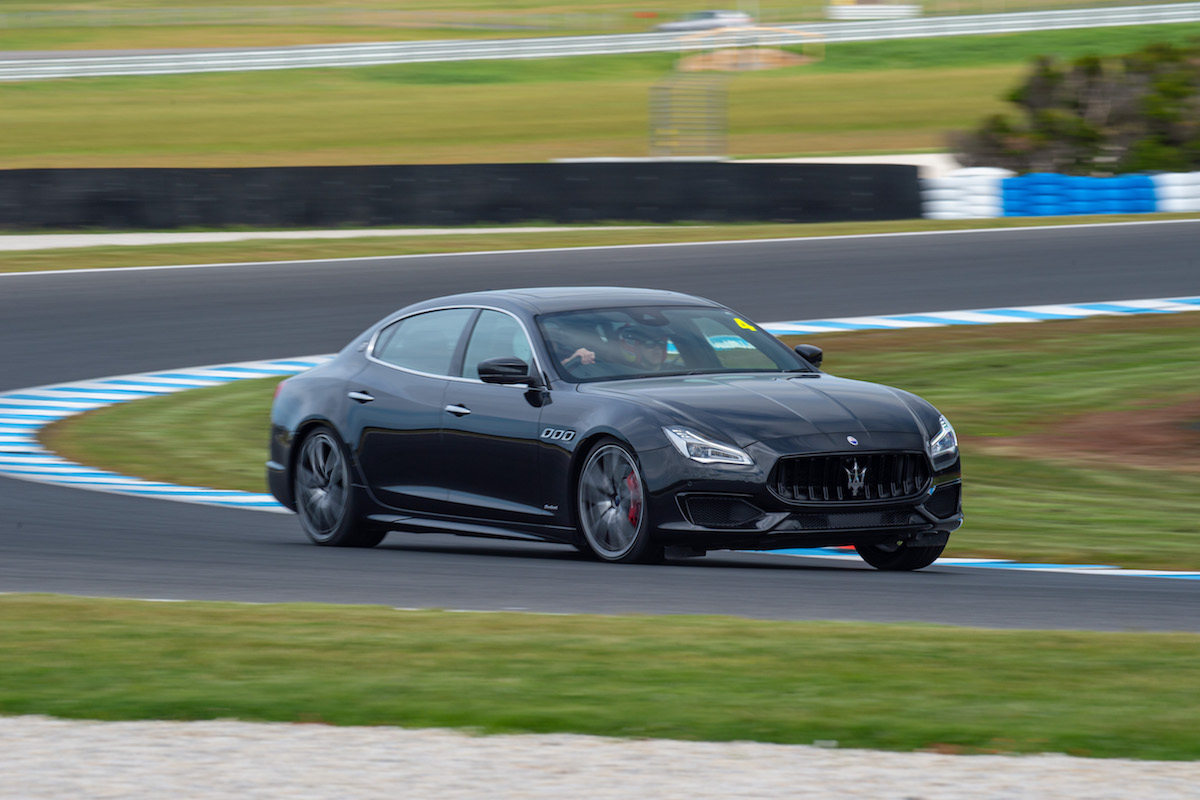 There’s an early morning stillness at a racetrack that’s unlike any other, and it’s only accentuated by anticipation of the clamour that will unfold later. Today a cold wind is blowing in from Bass Strait, with occasional fog and drizzle adding its own mood as Cape Barren geese enjoy a breakfast of grass just metres away from where we’re gathering.

Phillip Island’s Grand Prix racetrack sits comfortably in its bucolic setting, despite the annual invasion of bike enthusiasts for Grands Prix. It was designed for motorcycle racing, and I’m told by those who have been here before that it’s a fast, sweeping circuit we won’t forget. They turn out to be right.

We’ve been dropped here by helicopter from Melbourne by Maserati Australia to experience the full range of Maseratis, and especially two brand new Levante models, brought in just in time for these invitation-only Ultimate Drive Experience events. They’re so new that they’re left-hand drive, throwing some extra sizzle into this recipe for fun.

Over breakfast and coffee, our group of seven is given an introductory presentation on the history of Maserati, its model range and recent success in the Australian market. We’re all fully acquainted with Maserati of course – I’ve been hooked on the Italian motoring dynasty since I was a young sprog poring over black-and-white photos of Fangio and Moss tearing up F1 racetracks in their glorious 250Fs – but it’s only now that I’ve finally been given a chance to drive one in anger.

Outside, a fleet of Maseratis – among them a Ghibli S, a Quattroporte GTS, a GranTurismo and GranCabrio – sits waiting for us. The GranTurismo has been around for about a decade, we’re told, and is being replaced by a new model next year, but there are still a few available so we’d better be quick if we want one. 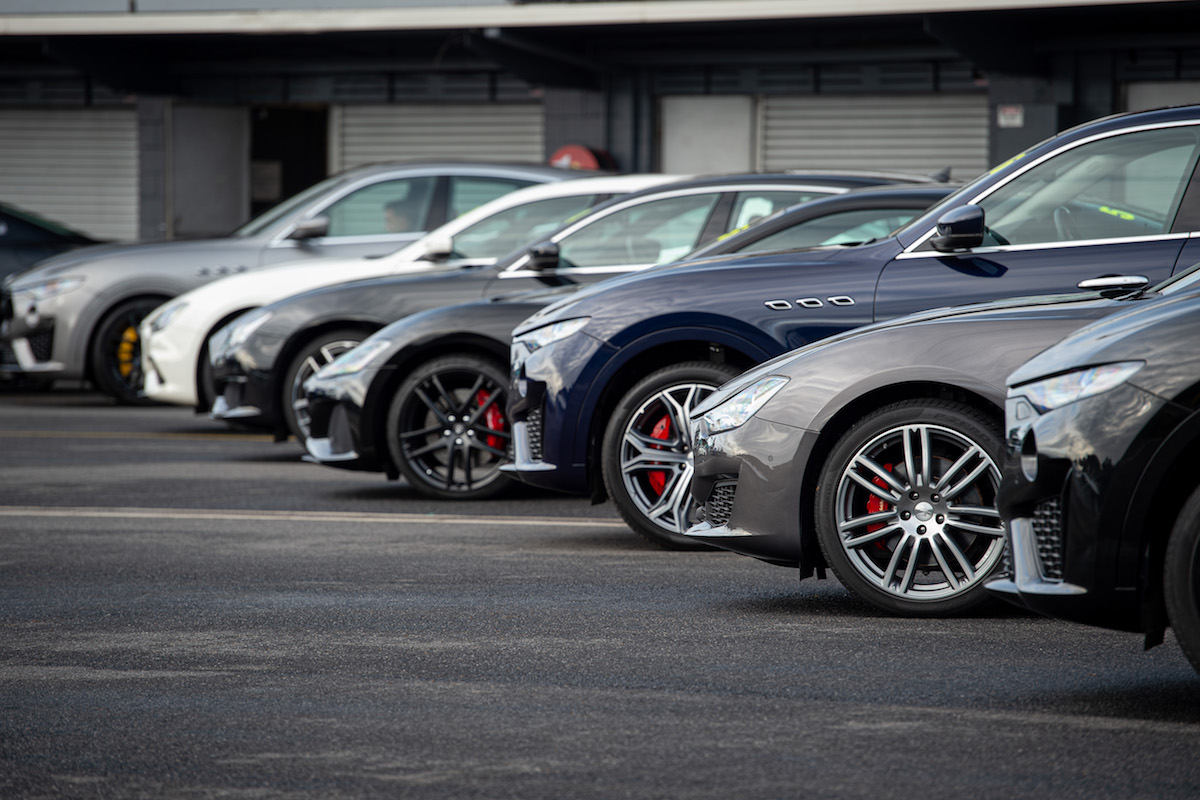 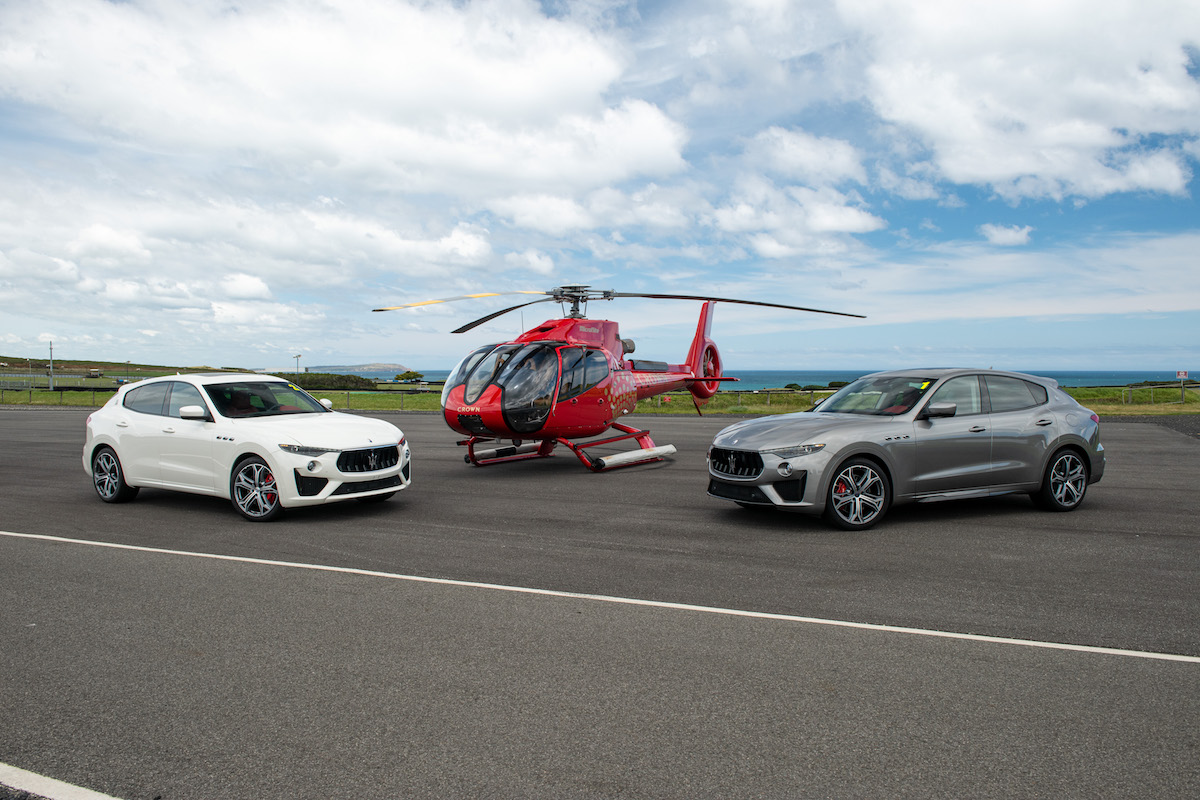 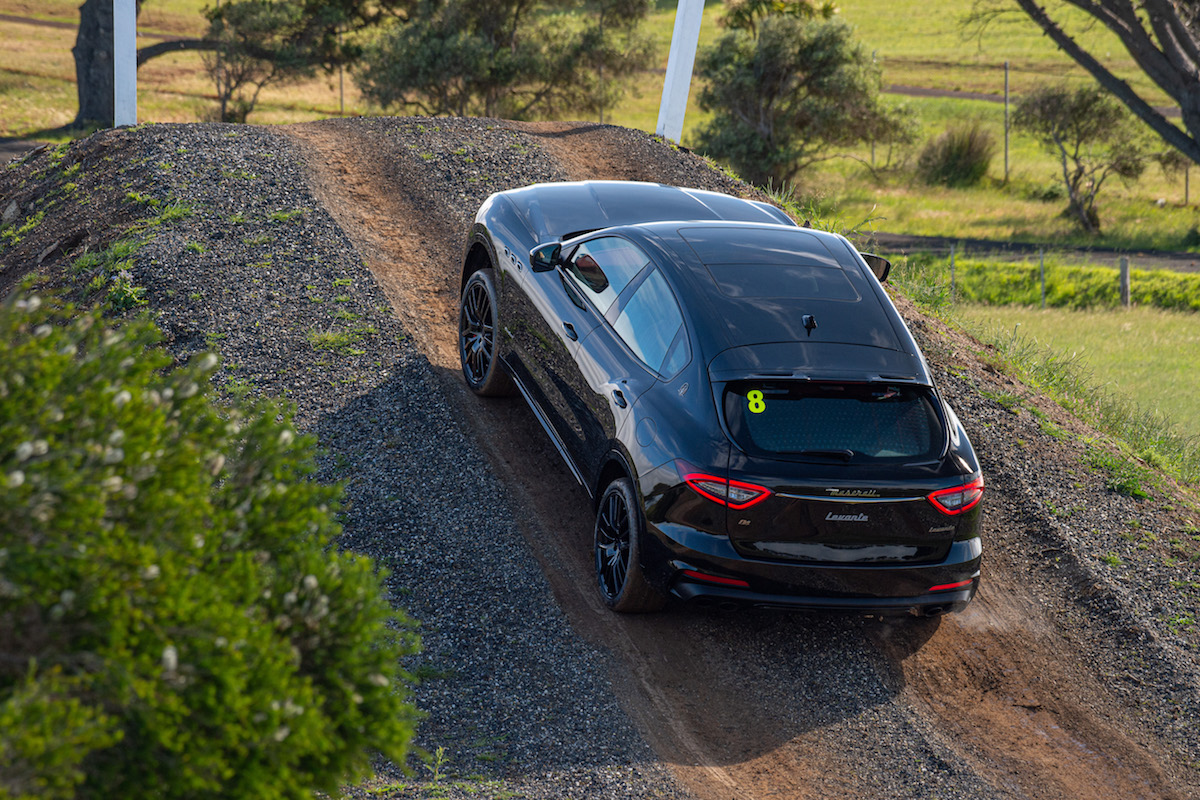 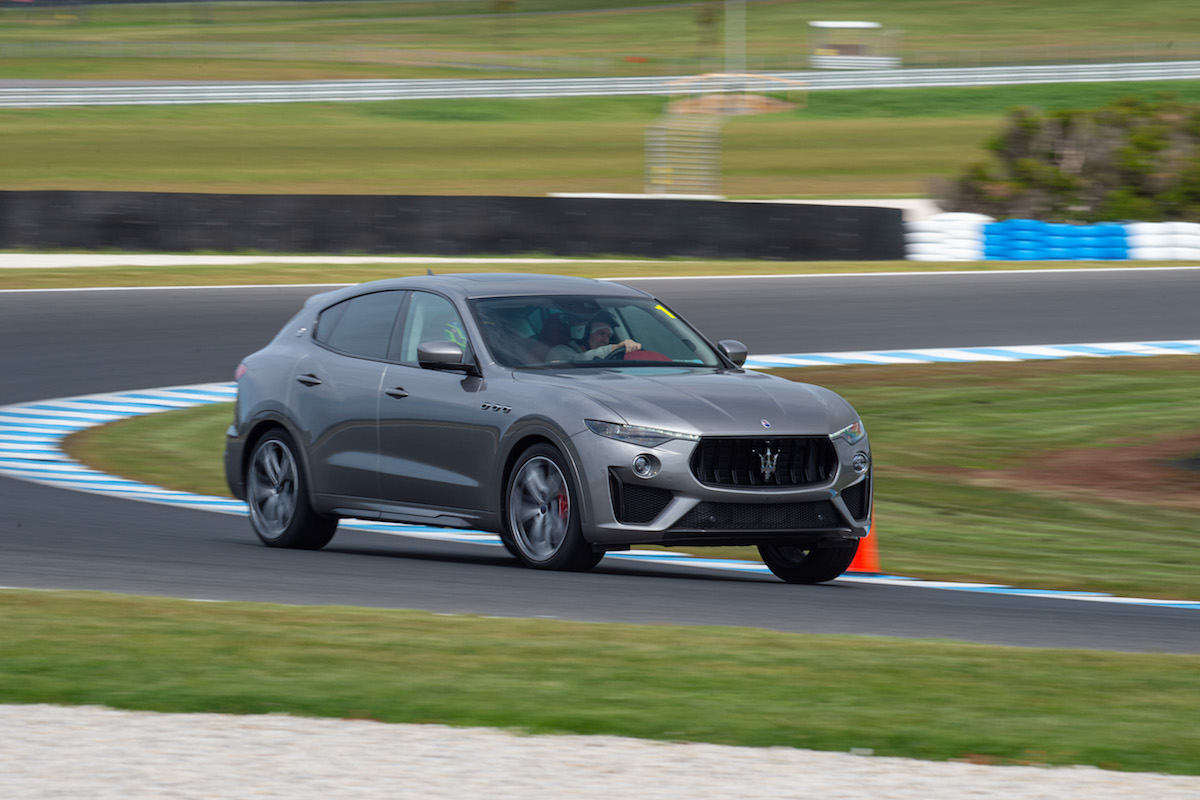 The Maserati team is keen for us to drive the two new arrivals – a twin-turbo V8 Levante GTS, which punches out 404kW, and the new hero model, the Levante Trofeo. They both borrow the same twin-turbo V8 engine from the Quattroporte GTS, but the Trofeo has had a heavy gym workout to boost power to 440kW and torque to 730Nm – all that grunt is pushed to the four wheels using Maserati’s Q4 Intelligent All-Wheel Drive system.

The results, as we find later, are nothing short of explosive. Maserati claims the Trofeo will do the 0–100km/h sprint in 3.9 seconds. That’s seriously quick in a low-slung sports car; in a large, two-tonne SUV it’s bordering on loony – and wonderfully scary on the track.

Split into two groups, we take to the track that has been judiciously marked for corner apexes and braking points with orange cones. As our group undergoes braking and cornering advice from a team of professional instructors, the other group tries the new Levantes on the short but challenging four-wheel driving course.

Right at the start I embarrass myself by spinning out in the cornering session. No damage, thankfully. My instructor tries lamely to make excuses for me but it was just driver idiocy. Note to self: pay more attention.

The four-wheel drive track sets a rugged test for both Levantes, but it’s uncanny how the two uber-luxury SUVs handle the very steep uphill test, the teetering run back down the hill, a deep water test over a bottom strewn with large rocks, and a steep, muddy escarpment that tries but fails to derail the Levantes as they slither sideways across it.

These are handsome machines rather than beautiful like their GT siblings, but their good looks belie their competence in an off-road setting.

I wonder how many will ever go bush bashing with owners who don’t fear panel and paint wounds. Those owners can count on making it to their adventure destinations.

Not one, but six Maseratis

And now the moment we’ve all been waiting for.

The six Maseratis are lined up in the pits, with a driving instructor in each to take us through our and the cars’ paces, for two laps of the track in each – no holds barred. Helmet on, last-minute instructions, and we take it in turns to head out.

Now the cones strategically placed earlier in the day really make sense as we hurtle around the track. With no time to think about it, any mistakes could be disastrous, but it’s all made easier by running advice shouted by our instructors as we tear from straight to corner and out again.

The second lap in each car is faster as we get better acquainted with each car’s traits and their different performance credentials, and we push harder. Down the straight in the GranTurismo I see 220-something on the dial and hold it there, despite much more on offer from the car, for fear of my own incompetence smearing us across the scenery.

The common trait in all of these cars is blinding pace and supercar handling in supreme comfort and luxury. Oh, and a glorious engine roar that is probably the most intoxicating howl in all of Motordom. It’s impossible not to floor the throttle at every opportunity just to hear these engines screaming belligerently at the sky and leaving a trail of grins behind.

It’s not really what they’re built for, but the new Levante SUVs are thrilling on the track, hurtling through corners on a racing line that no SUV should be able to take. These are large machines with serious heft, but they’re more than capable of coping with this fast track and an aggressive driving attitude.

Each car enjoys bespoke Maserati interior design, beautiful but efficient, providing a driving experience that whispers luxe Italian. The Quattroporte GTS, all dark red leather and carbon-fibre, is a grand tourer par excellence, and the GranTurismo, with alcantara interior, a Ferrari-Maserati-developed 4.7-litre V8 with a voice to rival Pavarotti, is the choice for leadfoots. But make mine the GranCabrio, thanks very much – GranTurismo performance and style with the roof down to mess what’s left of my hair.

And then suddenly it’s over. Chats, mishaps and laughs shared over a splendid lunch. A helicopter ride back to the real world. And memories of a day fanging Maseratis.