A truly mesmerising 60.79-carat flat drop-shaped rubellite is just one of the rare gems within the Barocko range. 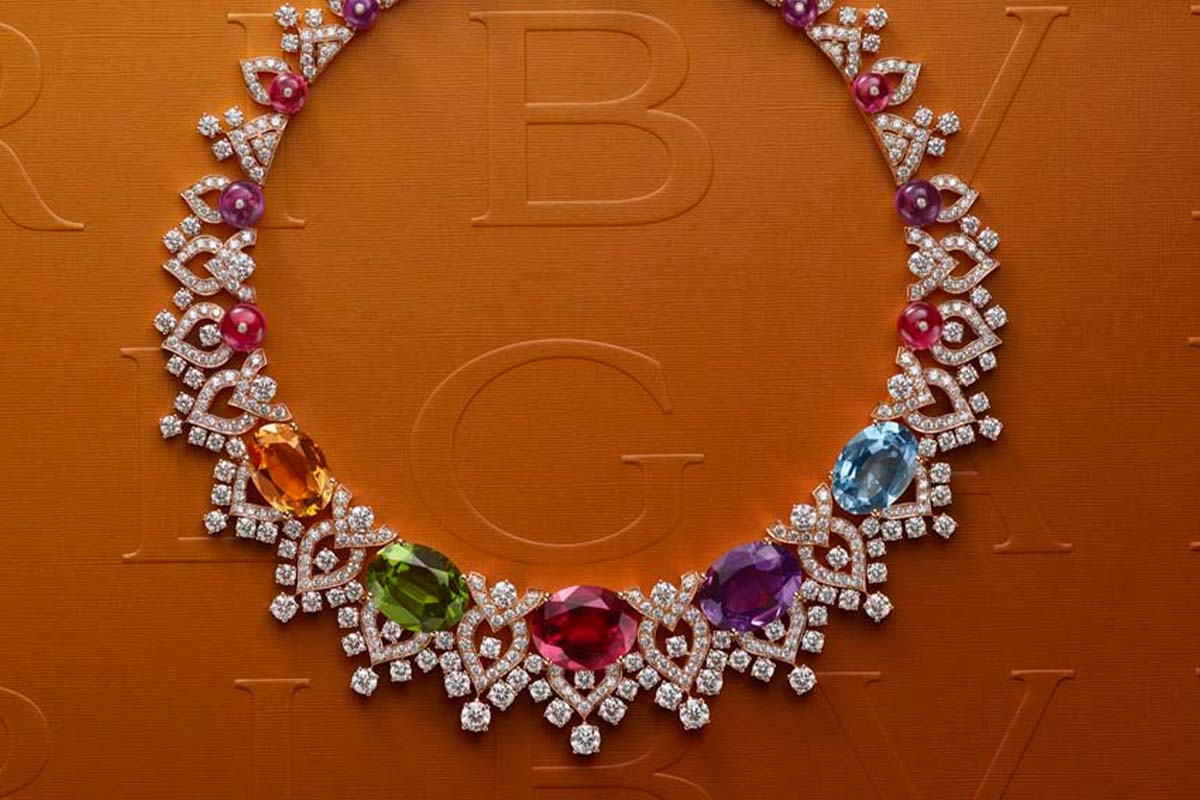 Travelling to Italy and strolling through the Roman ruins may be off the cards for some time, but we can still dream with Bulgari’s new Baroque-inspired high jewellery collection.

Paying homage to Rome, the Barocko line blends the magnificent charm of exquisite jewels with artistic and architectural beauty with each piece sharing a story of Italy’s captivating history.

The Baroque style, which originated in Rome in the 17th century, is woven throughout the dazzling collection that features some of the world’s rarest jewels.

For more than 130 years, the ancient Italian city has remained a source of inspiration for the maison. Handcrafted by artisan jewellers, Bulgari Creative Director Lucia Silvestri has rewritten the rules of high jewellery design to deliver exuberant, bold creations, evoking a true sense of awe. 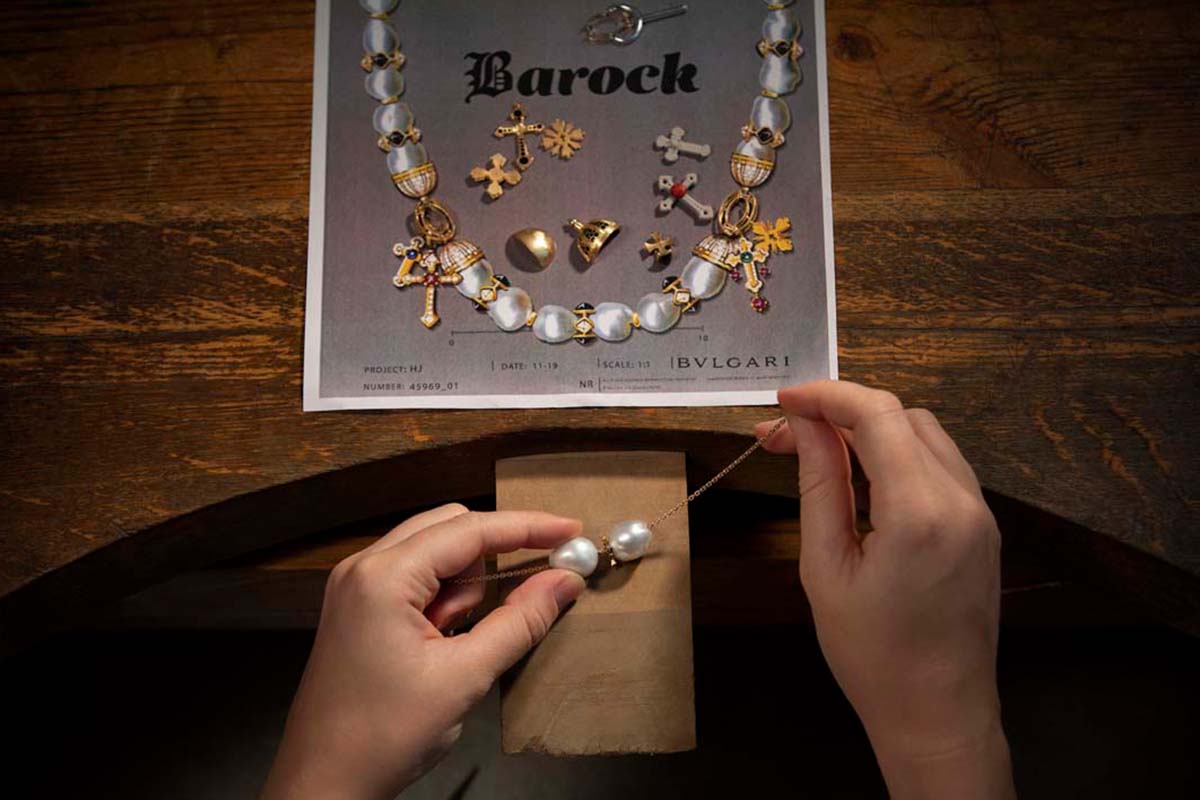 One of the stars of the collection is the 47.57-carat central sapphire sparkling in the ultra-feminine Blue Fantasy platinum necklace. The precious gem was sourced in Sri Lanka and features an intricately crafted floral composition of Ceylon sapphires and diamonds. The necklace echoes the delicacy of Pietro da Cortona’s fresco decorating the ceiling of Palazzo Barberini – a Roman palace that is now home to the National Gallery of Ancient Art.

Optical illusions in the Roman Baroque church of Sant’Ignazio di Loyola that were created by fresco painter Andrea del Pozzo influenced the graphic splendour of the Cupola necklace. A mosaic of platinum diamonds and emeralds frame a mesmerising central Colombian sugarloaf emerald, which comes to life with a touch of 80s boldness.

Symbolising hope and faith, Baroque feathers led to the creation of the geometric, fan-shaped 3D diamond ornaments of the Precious Feathers necklace. The platinum necklace boasts an eye-catching drop-shaped emerald pendant, which can be detached to transform into a sumptuously regal yet more discreet choker.

Exclusively cut for Bulgari in Jaipur, a sumptuous cushion-shaped rubellite stars in the Pink Twists pendant necklace, shining beside yellow gold, emerald and marquise diamonds. For optimal versatility, it can be worn long or wrapped around the neck for a contemporary look.

Bulgari’s fine craftsmanship sends a message of hope and optimism through its palette of vibrant colours, unique gems and truly one-of-a-kind pieces.

Capturing the softness and voluptuousness of works by leading Baroque artists such as Gian Lorenzo Bernini, Bulgari has given new life to the 17th century artists’ iconic art through Ruby Drapery earrings and rings. Marble drapery inspired the exuberant pieces where artisans played with white gold, diamonds and rubies. 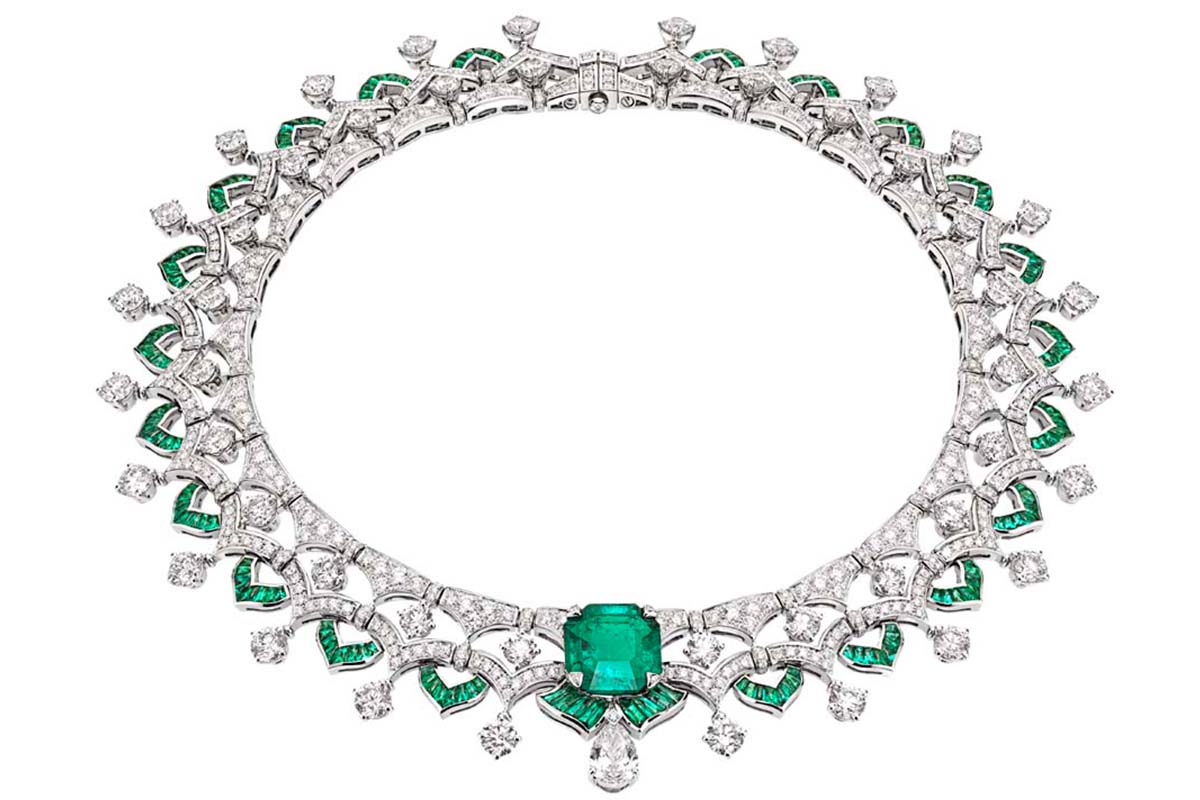 But sourcing breathtaking gems isn’t always easy. Creative Director Lucia followed 10 gems, including five Columbian emeralds, around the world for more than a year before she could acquire them for Bulgari. The result was the Green Dream necklace (a bracelet and earrings complete the set), which creates captivating effects of lights and reflections.

Another stunning necklace in the Meraviglia range is the Wings of Rome platinum necklace enriched with marquise, round- and drop-cut diamonds built on three different layers to produce a fascinating 3D effect. It was the outstretched wings of a bronze statue of Archangel Michael that watches over the Eternal City from atop the Castel Sant’Angelo that inspired the majestic piece.

Taking 500 hours to complete, the Serpenti Spell diamond bracelet-ring is one of the high jewellery collection’s most distinctive creations. Both modern and charming, Bulgari’s seductive snake is a famed symbol of the maison’s DNA. The newest serpent addition was inspired by Gian Lorenzo Bernini’s flamboyant Fountain of the Four Rivers in Rome’s Piazza Navona. Not only is it a nod to Italian architecture, but it also celebrates female empowerment by mirroring the henna tattoos of Indian women. 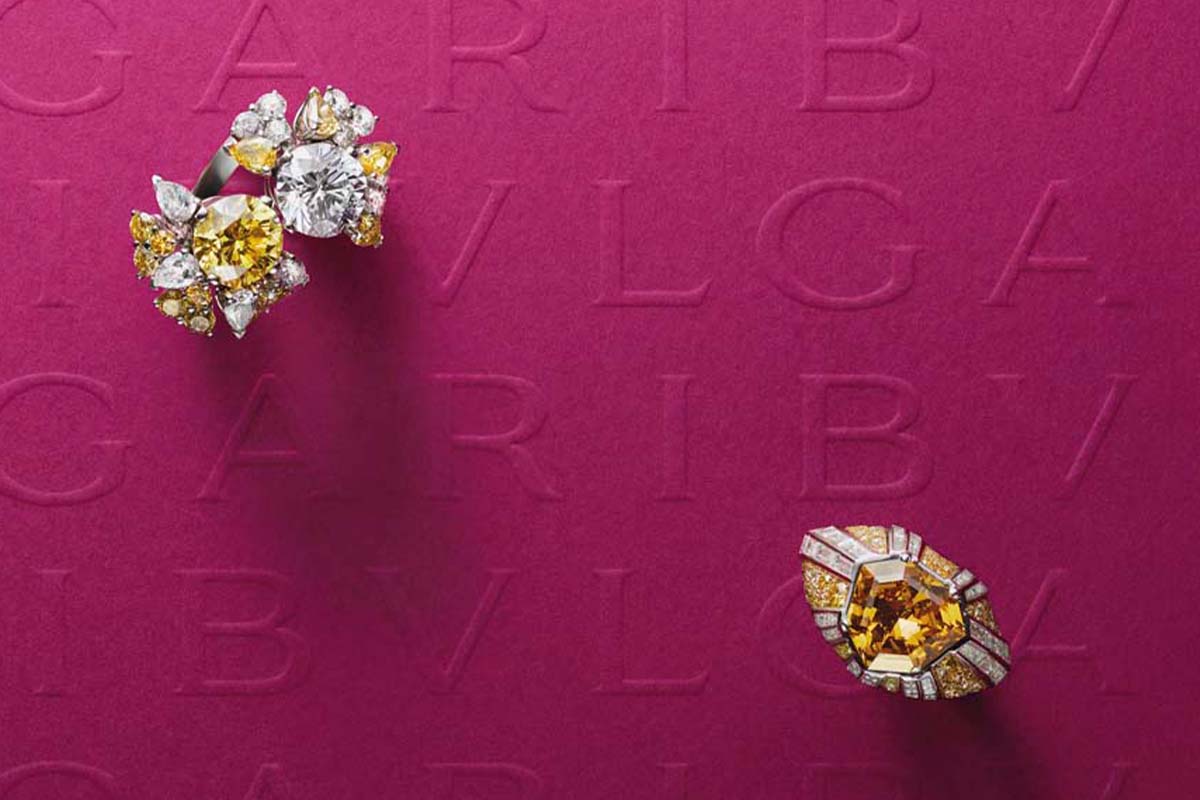 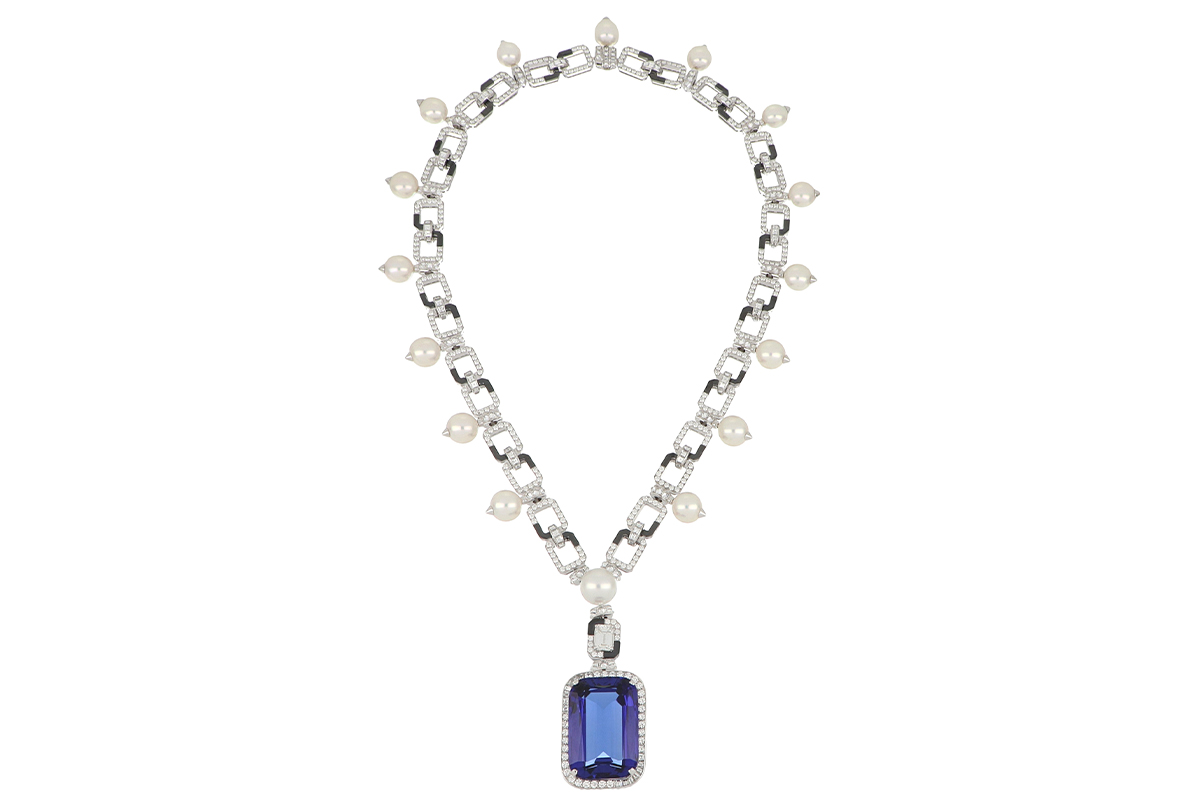 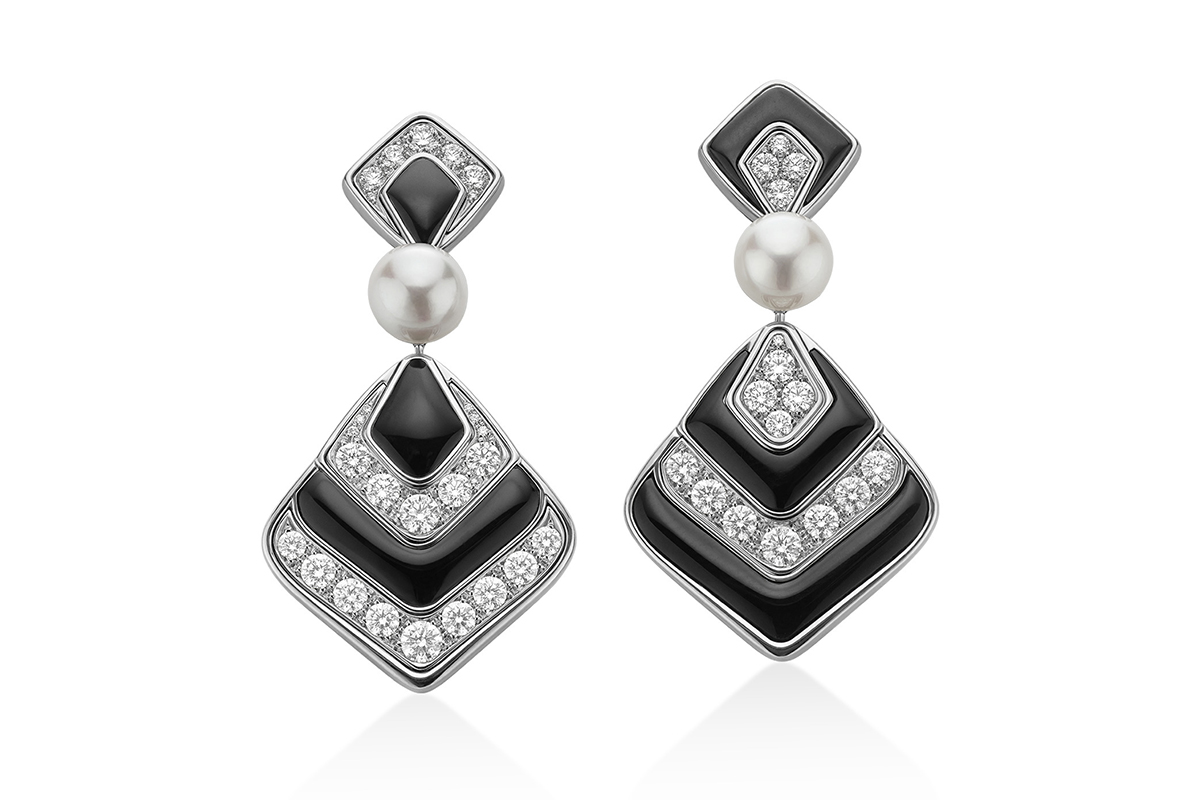 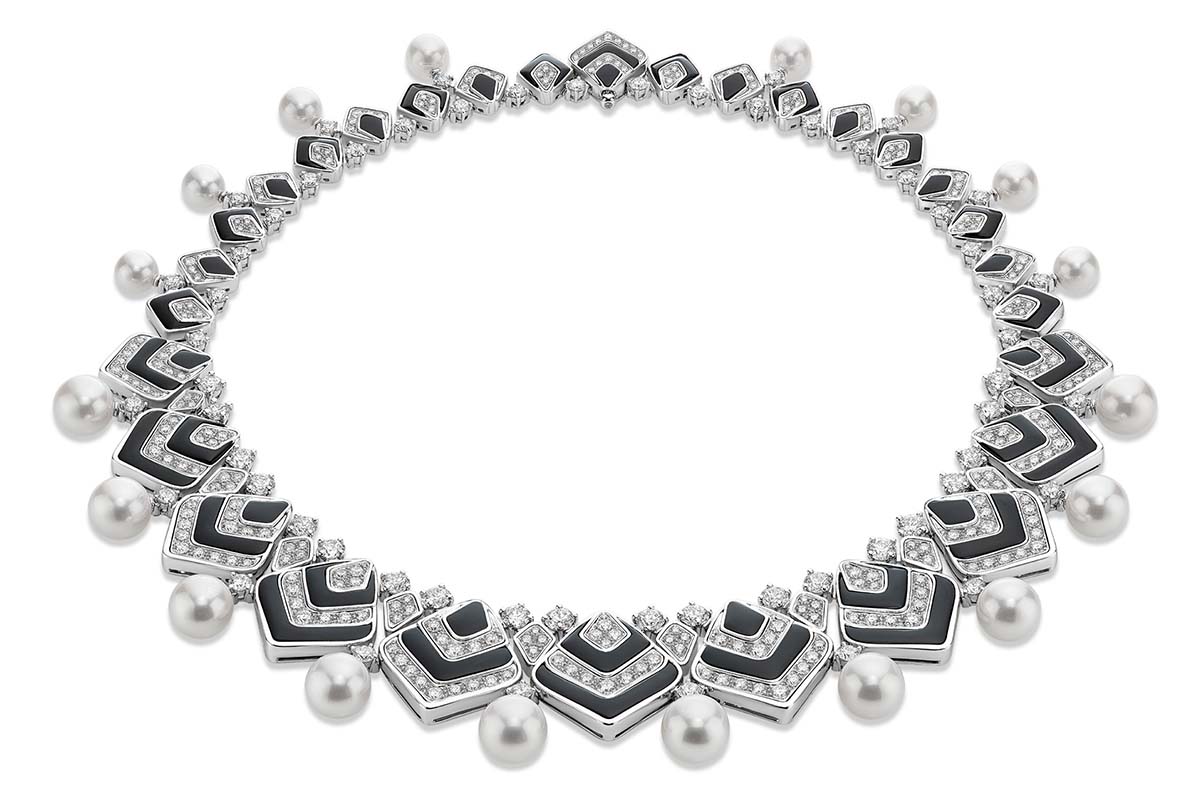 A kaleidoscope of precious stones – from tanzanites and aquamarines to chrysoprases and emeralds – makes for another creation influenced by feathers and signifies the vibrance of peacocks in the Peacock Wonder necklace.

The show-stealer of the light range is an incredibly rare, yellow kite-shaped diamond that was sourced in Hong Kong to craft an astonishing ring. Yellow and white diamonds have recreated the light effects of one of High Roman Baroque’s masterpieces – Gian Lorenzo Bernini’s Ecstasy of Saint Teresa sculpture.

One of the most complex pieces created for the new high jewellery collection is the Rosso Caravaggio necklace. Taking 1,500 hours to complete, artisans showcase a rare 10-carat cushion-cut ruby sourced from Mozambique, complemented by diamonds. A sophisticated mechanism is hidden within the piece that allows the necklace to become two. 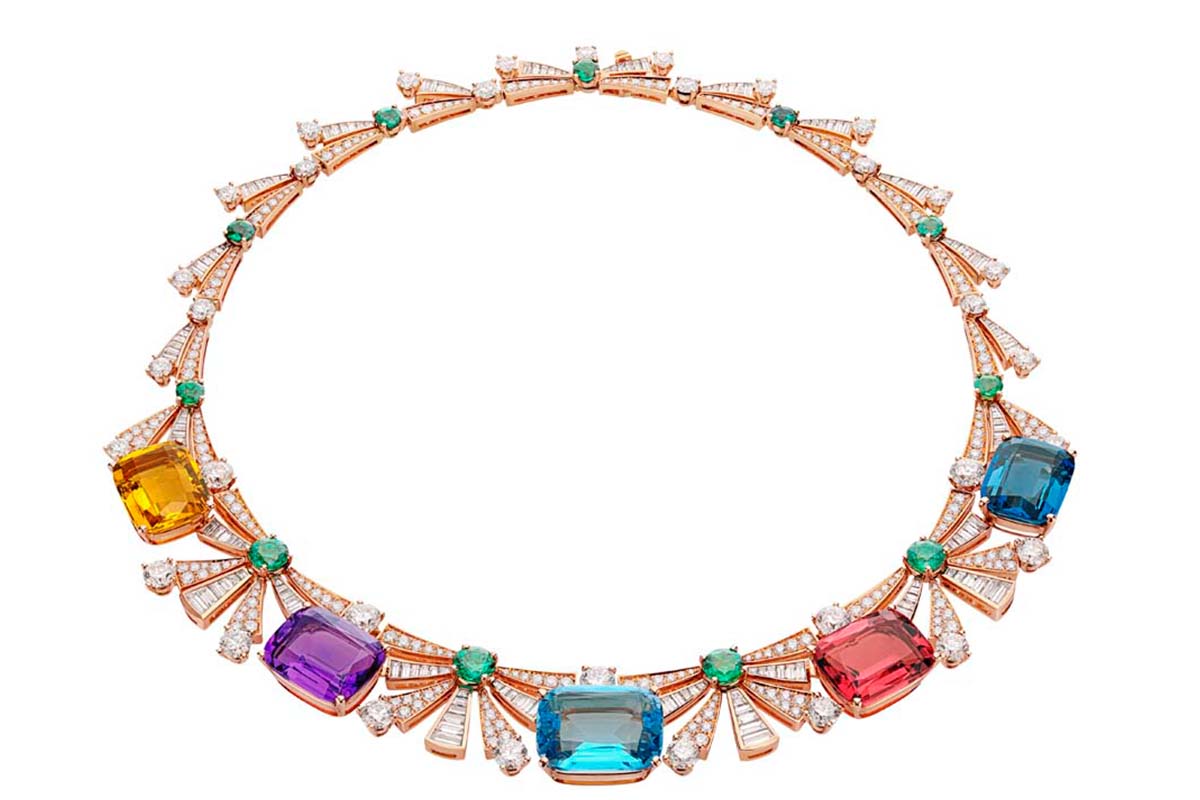 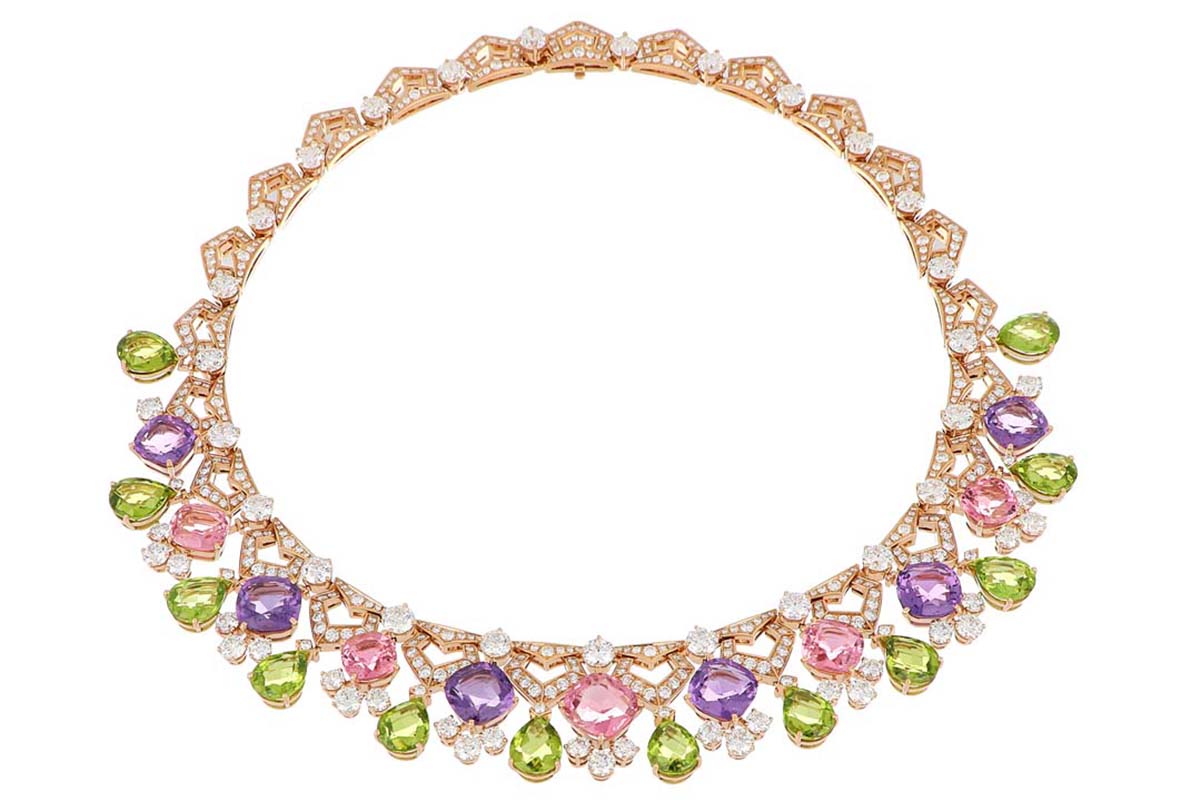 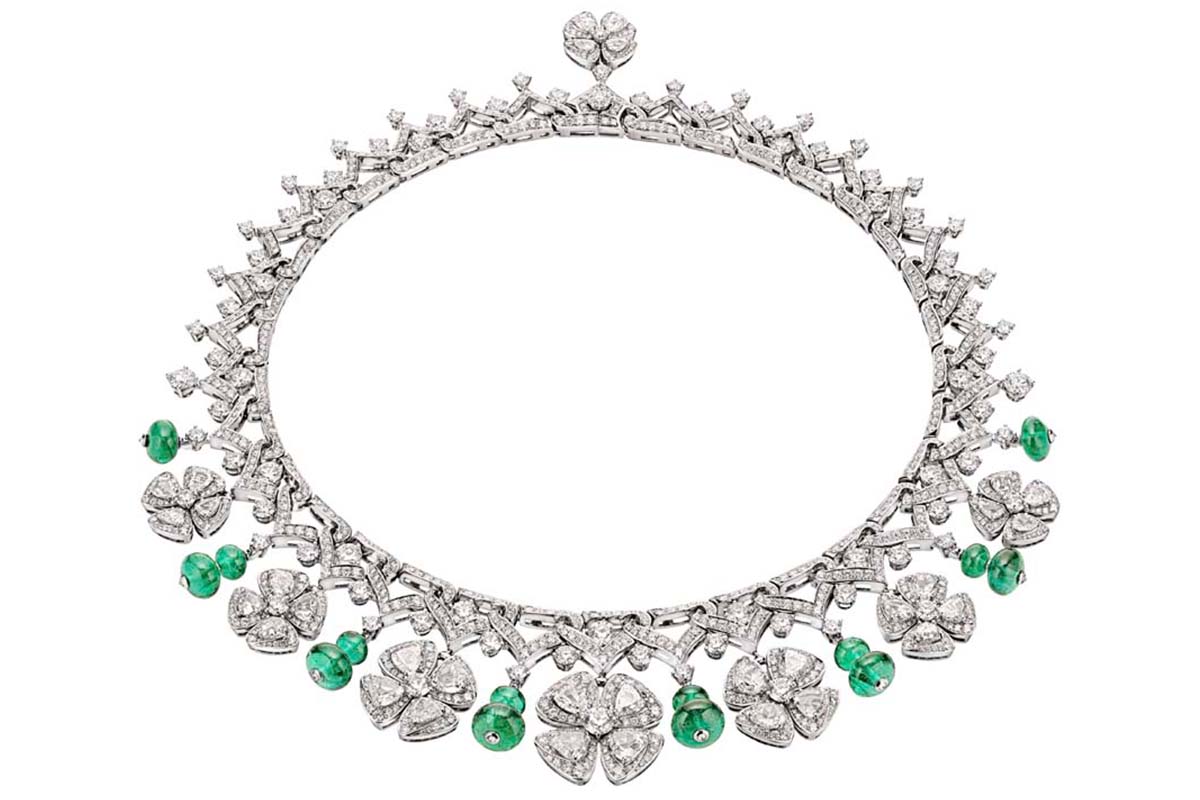 Designed to steal the spotlight, the Cabochon Exuberance necklace takes you on a global tour. Combining two tanzanites sourced in New York, rubellites and emeralds from Jaipur and aquamarines purchased by Bulgari in Hong Kong, the daring piece was inspired by Rome’s Horti Farnesiani complex at Palatine Hill (described as being the first nucleus of the Roman Empire).

Of the dedicated collection, nothing says Baroque more than the Lady Arabesque necklace and coordinated pendant earrings. Vivid hues of purple, green and gold shine while pink and violet sapphires sourced in Sri Lanka join tiny Paraiba tourmalines, emeralds and round and drop diamonds – a true homage to the rich period.