Girard-Perregaux heads back to the future with the Casquette 2.0

Going back to the future never looked so good with the revival of Girard-Perregaux’s polarising and progressive quartz watch from the 70s. 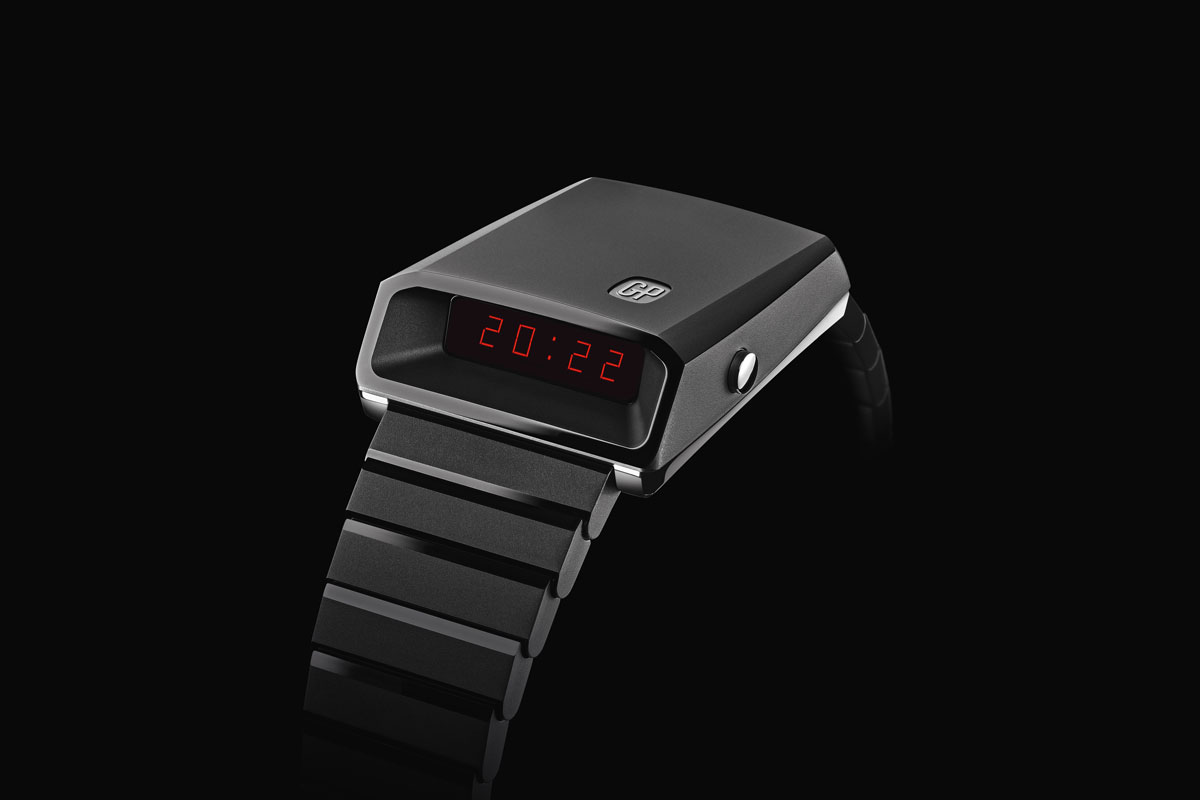 History repeating itself can often be a scary idea. War, shoulder pads and leather pants regularly come to the front of mind – but not today. Swiss luxury watchmaker Girard-Perregaux has unveiled the revival of one of its most audacious timepieces from the late 70s, which ironically channelled the vision of the future.

It may have been a bold move to omit traditional watch hands back in that decade, but the watchmaker forged ahead with it and today, in 2022, the Casquette 2.0 looks right at home thanks to its sleek minimalist design consisting of an LED display wrapped in modern premium-grade ceramic and titanium.

For the unacquainted, the Girard-Perregaux Casquette 2.0 is more than just a nod to the past.

Breaking ground in the 70s 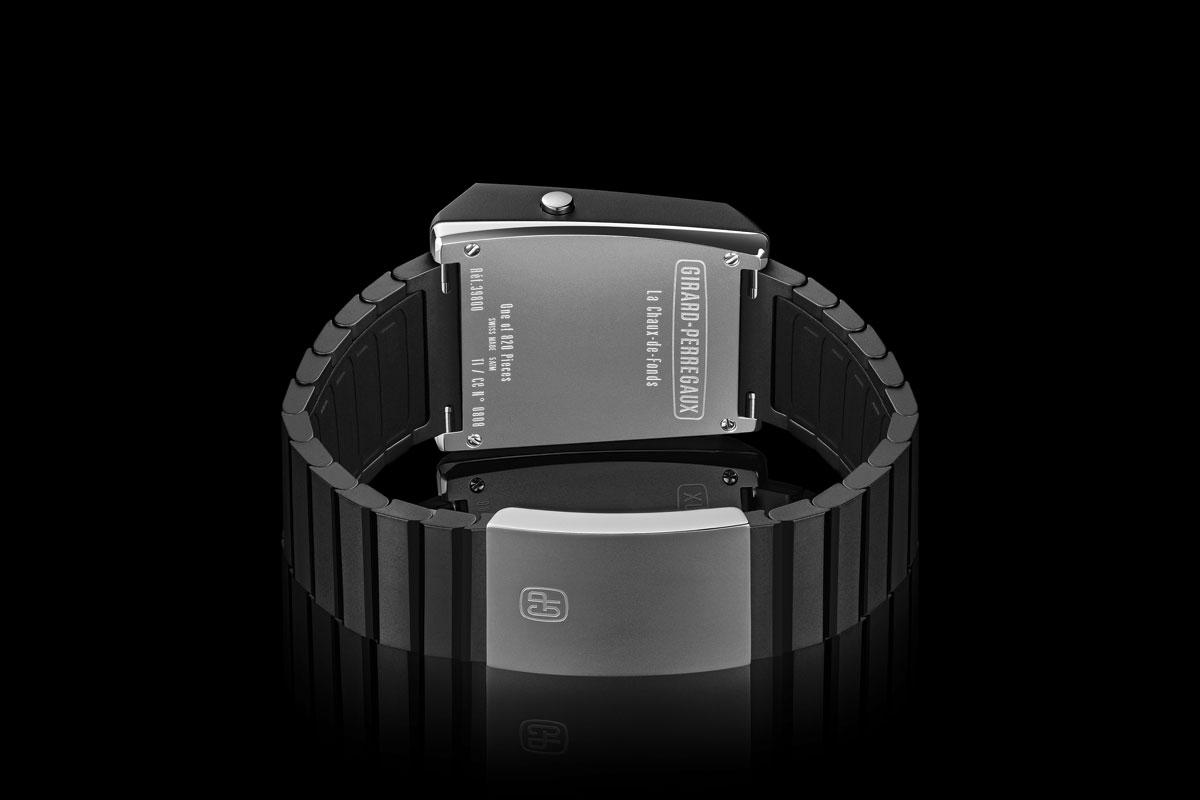 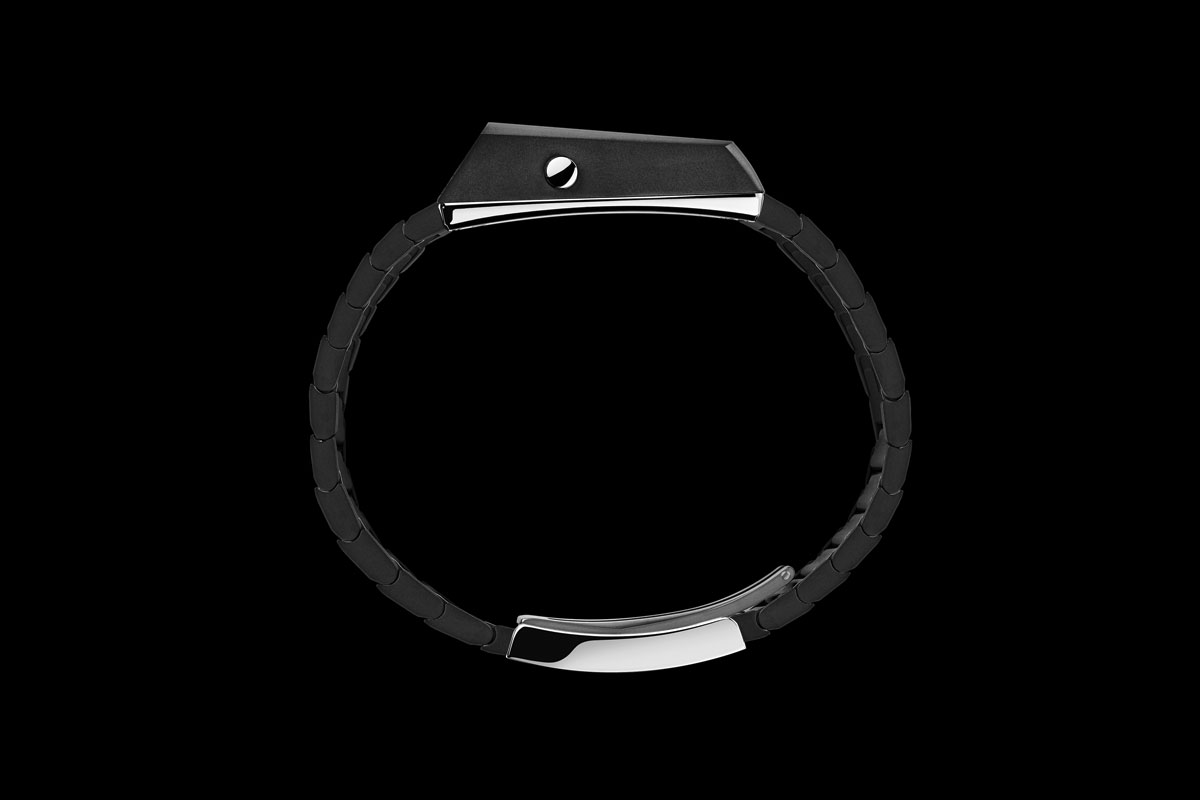 The story of the original Casquette began between the years of 1976–1978 when just 8,200 examples were produced. It was considered a cutting-edge timepiece at the time, which saw the inclusion of a tubular LED display as opposed to conventional hands. It was also period-correct, being powered by a quartz movement, which was the horological zeitgeist of the 70s. Luckily, Girard-Perregaux, the Manufacture founded in 1791, was at the vanguard of quartz timekeeping. The frequency of 32,768 hertz was set by the maison and subsequently adopted as the universal standard for quartz watches, a feat in its own respect.

While the original model wasn’t officially named ‘Casquette’, it’s unique appeal among collectors saw its reference number replaced with the endearing nickname, which translates to ‘Cap’ in English. The original model also displayed the hours, minutes, seconds, day and date with its quartz movement delivering a high degree of precision. While many rival firms merely swapped a conventional display for a circular panel featuring a series of LEDs, Girard-Perregaux looked at the Casquette’s design with a fresh set of eyes. The tubular LED display was chosen not only for its functionality, but also its appearance, which sidestepped convention and forged its avant-garde styling that remains relevant to this day while giving a cheeky nod to the retro era.

During its few years of production, the Casquette was offered in three case variants: Makrolon (polycarbonate), yellow gold plate and steel. Its unique aesthetics paired with limited numbers would ensure its longevity among collectors and fashionistas alike for decades to come.

It was this endearing movement that would eventually bring the return of the illustrious Casquette 2.0 in a form like never before. 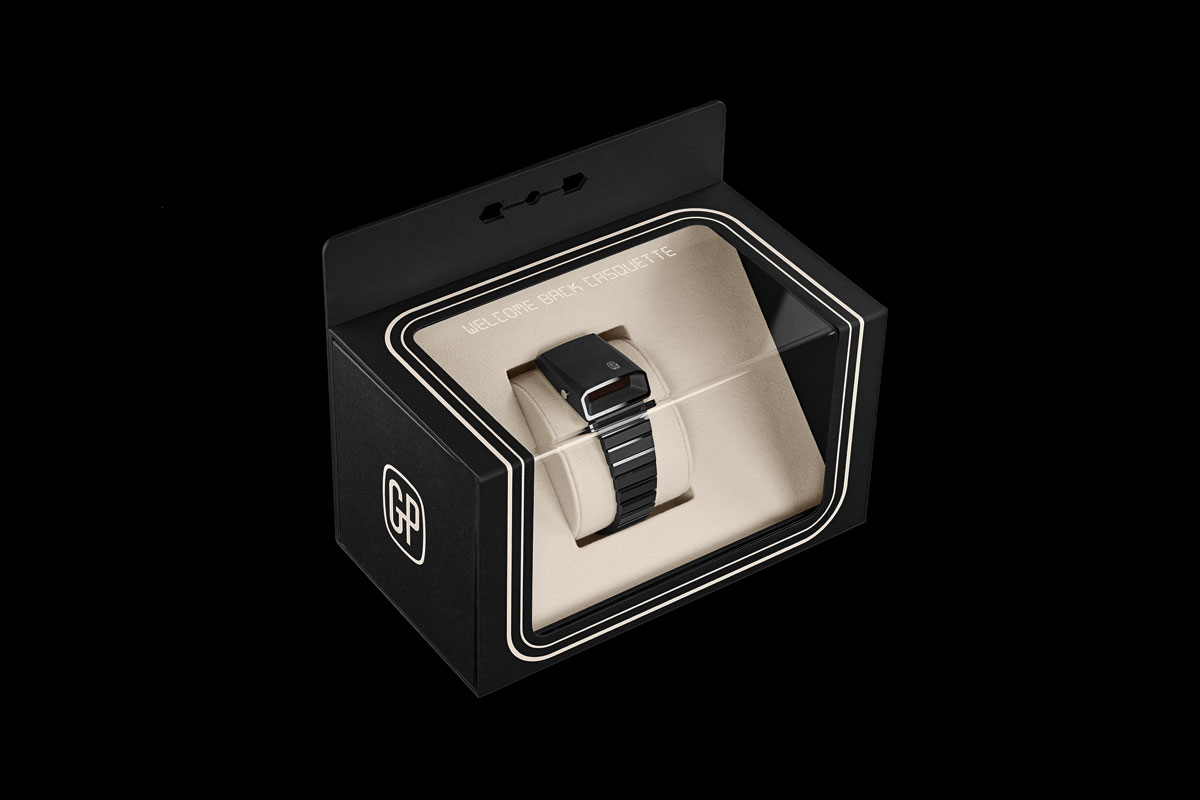 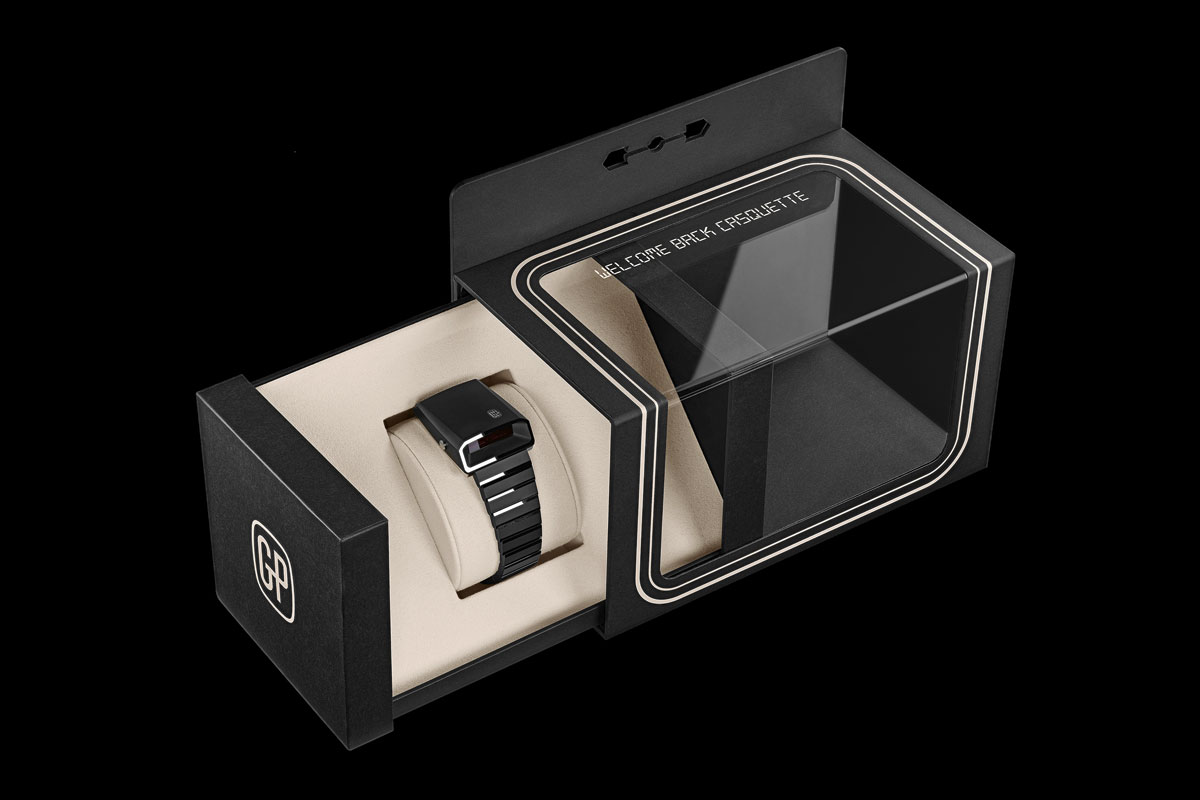 Staying true to an icon is only half the job. The Casquette 2.0 elevates the original model up to today’s demands by giving it a scratch-resistant ceramic case and Grade 5 titanium caseback. Both titanium and ceramic are hypoallergenic and light on the wrist while providing superior strength properties. Weighing in at an exceptionally low 107 grams, the new Casquette 2.0 is more comfortable than ever.

Finer details of this chiselled timepiece include titanium pushers and a period-correct titanium ‘GP’ badge positioned atop the watch. The movement known as Calibre GP03980 drives the timing and is inherited directly from the Girard-Perregaux and Bamford Watch Department collaboration of 2021 – a timepiece that was auctioned for a charity raising funds for research into Duchenne muscular dystrophy.

“Not all watches retain their looks and desirability with the passage of time. However, since production of the original Casquette ceased in 1978, the interest in this watch has never diminished,” said Patrick Pruniaux, CEO of Girard-Perregaux.

“We regularly receive enquiries and have witnessed these models attract much attention, fetching 10 times their original sales price on the pre-owned market. If only everything we bought increased in value in such a way! Quite simply, the original Casquette serves to further validate our reputation for designing watches with lasting appeal. We are delighted to welcome the Casquette back – a stylish watch that promises a lasting allure.” 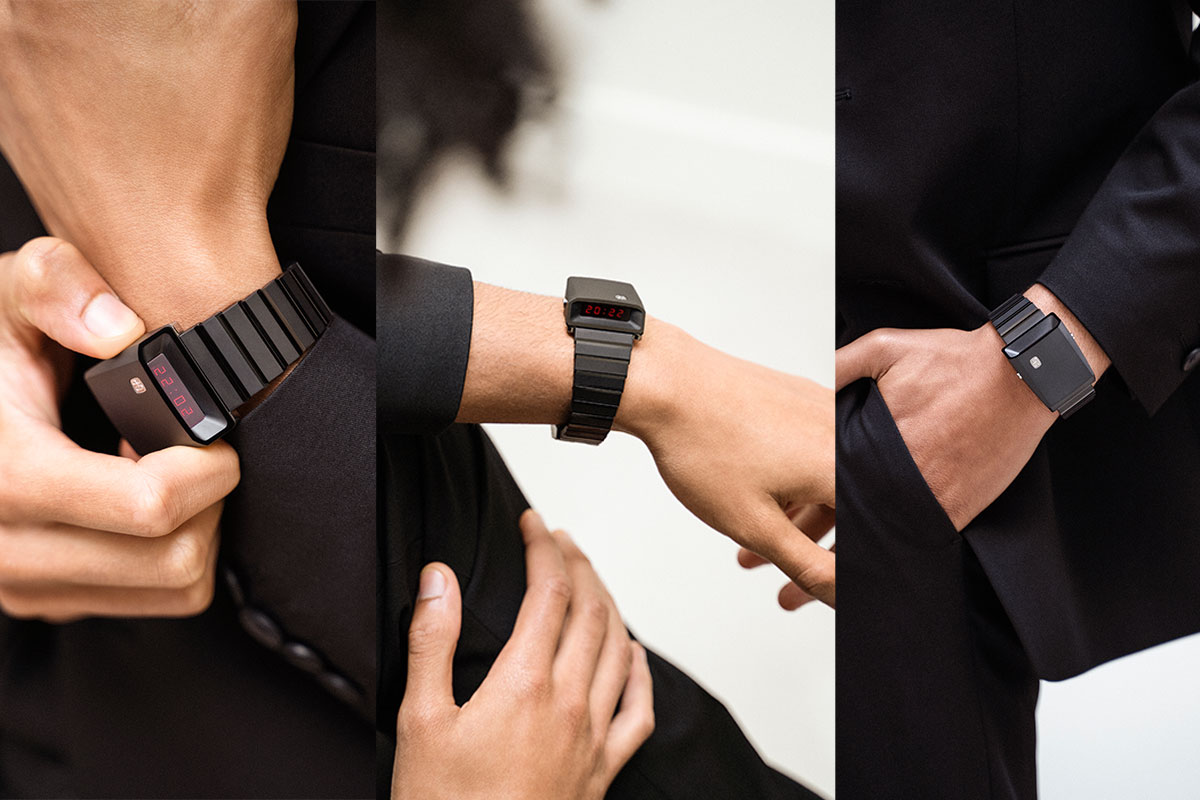 Staying in line with the original model, Casquette 2.0 also displays the hours, minutes, seconds, day, and date. What’s been improved via the new movement now includes additional extra display functions like the month, year, chronograph, second time zone and secret date. This latter function allows the wearer to save a memorable date of their choosing. The secret date (date, month and year) can be shown each day at a time specified by the wearer – for example, a wedding anniversary.

Battery life is also preserved by allowing the wearer to view the time on demand. The watchmaker specifies that if the pushers are pressed on average 20 times per day, the battery should last for two years.

The watch is finished off on an elegant yet futuristic ceramic bracelet with a rubber interior. This move makes Casquette 2.0 more flexible and comfortable than the bracelet fitted to the original Casquette. The new bracelet is now paired with a folding titanium buckle.

Girard-Perregaux is looking to capitalise on the model’s collector status for a new era by limiting the Casquette 2.0 to just 820 pieces worldwide. The number pays homage to the original model’s release figures, but makes it even more exclusive both in production and acquisition.

In 1976, the Casquette was bought by so-called ‘early adopters’ resulting in many ‘laggards’ missing out. History repeats itself today and Girard-Perregaux is allowing customers to pre-order the Casquette 2.0 exclusively on the brand’s ecommerce site from 22 February 2022 to 7 March 2022. If there are any remaining after this sale window, they will be found exclusively in select Girard-Perregaux retailers around the world.

Read next: Girard-Perregaux and Aston Martin go green with their latest creation