Girard-Perregaux and Aston Martin go green with their latest creation

The next creation from a partnership boasting a collective expertise of over 330 years culminates in the Laureato Chronograph Aston Martin Edition. 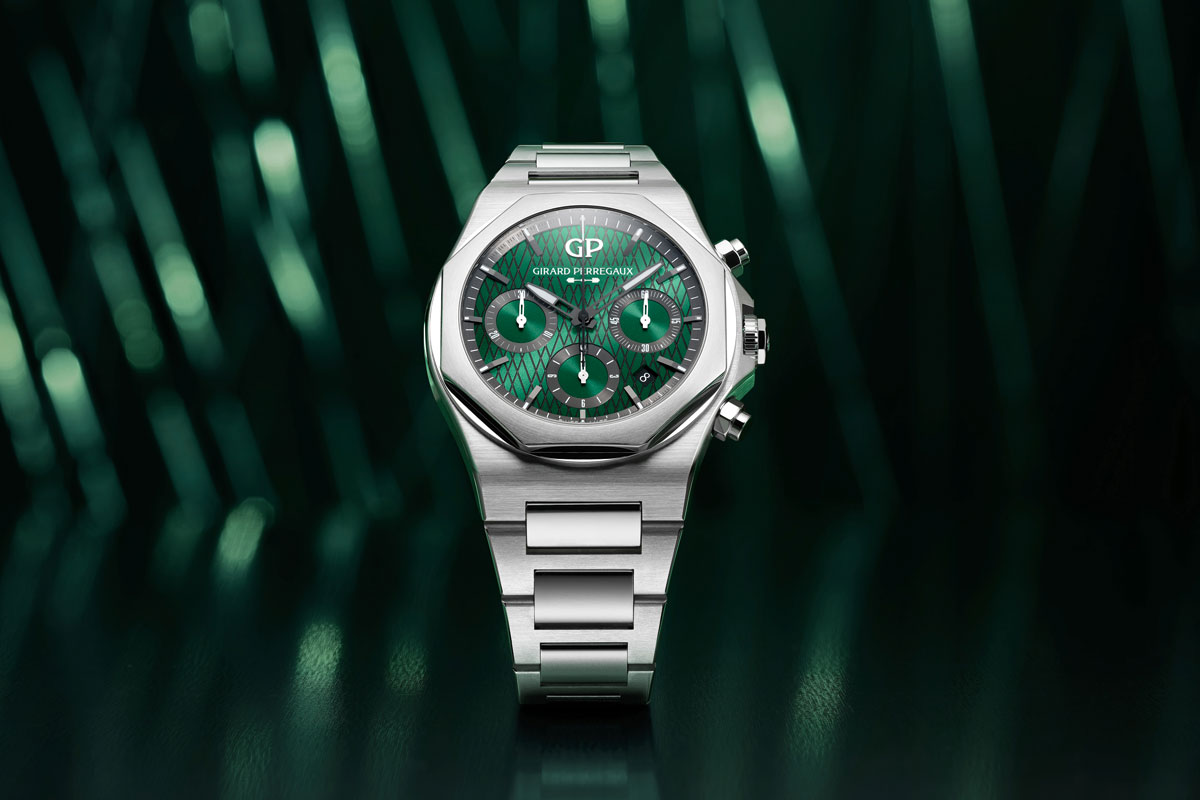 Fine mechanical watchmaking and motorsports share a long and storied history. In 2021, that iconic partnership was officially forged between Swiss watchmaker Girard-Perregaux and British carmaker Aston Martin. The next creation from this friendship, boasting a collective expertise of over 330 years, has culminated in the Laureato Chronograph Aston Martin Edition.

The purist’s timepiece is a masterclass in shapes, textures and light, tailored to those who appreciate luxury and performance. More strikingly, it wears Aston Martin’s legendary British Racing Green hue in all its glory to ensure a captivating timepiece on the wrist. This rich heritage of green dates all the way back to the early 1900s when different countries’ race cars were assigned different colours. The French cars were adorned in blue, the Italian in red, the Belgian in yellow, the German in silver and the British in a unique hue of green. This colour was eventually embraced as Aston Martin’s own signature colour across its race cars and can be found on the dial of the new Laureato Chronograph Aston Martin Edition. 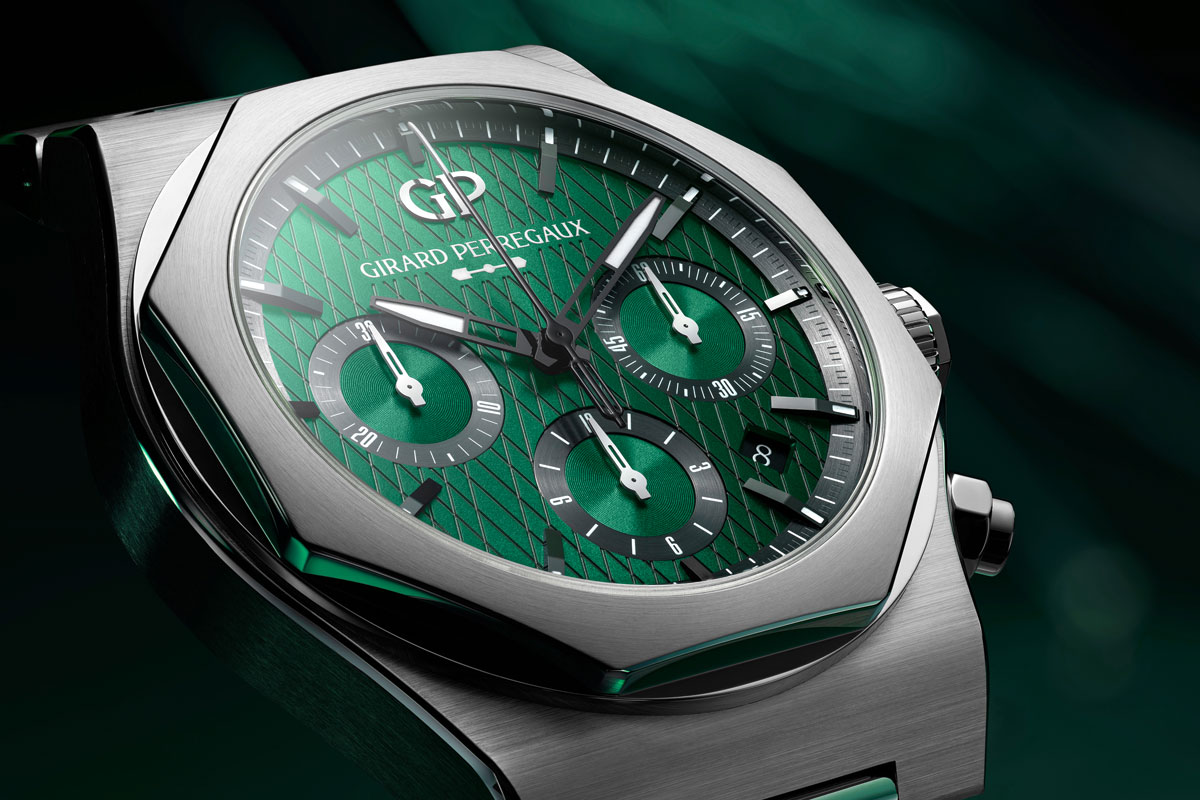 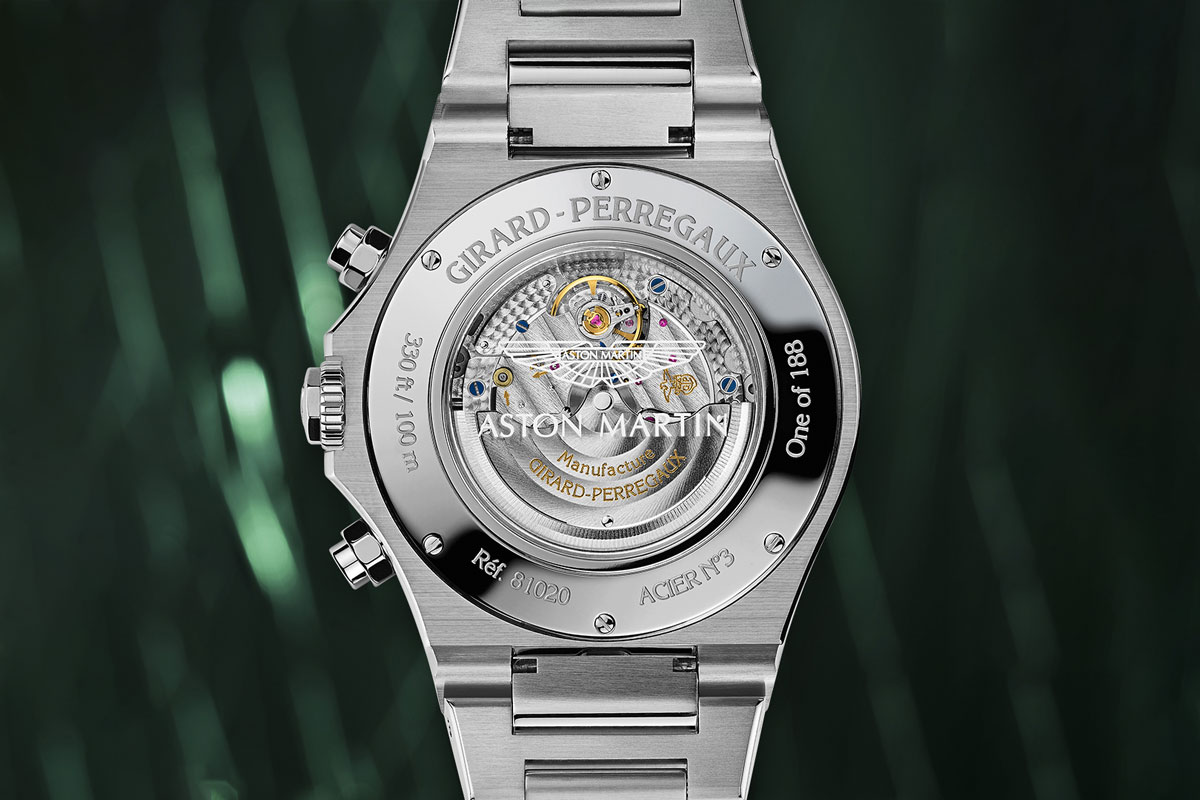 Meticulous craftsmanship lies at the heart of both Aston Martin vehicles and Girard-Perregaux watches. This esteemed workmanship is replicated in the timepiece with a dial suffused with Aston Martin Green through the painstaking application of 21 layers of paint. This unique process gives the watch face an immense depth across seven distinct mediums.

The motorsport heritage is further evoked through automotive influences like cross-hatching, a diamond-like pattern first seen with the carmaker’s ‘AM’ logo between 1921 and 1926. This captivating motif was also inspired by the quilted seats found in the British brand’s numerous high-performance sports cars.

“Evidence of it continues to appear in subtle touches throughout the watch, for instance, in its partially openworked hour and minute hands, which have been purposely designed to evoke thoughts of racing cars, eschewing extraneous material to deliver superior performance. Likewise, the central chronograph seconds hand features a counterweight that resembles the sides strakes first seen on the 1958 Aston Martin DB4.”

The Laureato Chronograph Aston Martin Edition features a trio of counters on the dial with openworked hands – two being chronograph registers and one a small seconds display. These functions are accompanied by the hours, minutes and central seconds hands alongside a date window at the 04:30 position.

The case meanwhile boasts its own design flair through a 42 millimetre 904L stainless steel case complete with an octagonal bezel harking back to the watchmaker’s Laureato model of 1975. This particular metal selection was carefully thought out as it is less common and more expensive to procure than 316L stainless steel. The advantages of this appointment include superior corrosion resistance, improved scratch resistance and a brighter, more luxurious glean. This same steel also extends onto the satin brushed bracelet.

Powering the watch is Girard-Perregaux’s Calibre GP03300-0141 self-winding mechanical movement, which can be viewed from the sapphire open caseback bearing the Aston Martin motif. This particular movement boasts a power reserve of 46 hours.

For those who intend to use the watch more adventurously, the Laureato Chronograph Aston Martin Edition comes with a 100-metre water resistance rating.

Only 188 examples of the timepiece will be released worldwide. Visit Girard-Perregaux for more information.