As a nation, Australia tends to love any story in which a little battler takes on the wide, wicked world, and wins. But is it really plausible to see a company with enough capital and clout to launch its own range of luxury yachts as a humble Down Underdog?

Well, yes, when you consider that what Longreef – established by experience boat syndication specialist Andy Young and his business partner Mark Johnston (executive chairman of Investment Trends) – is attempting to do is something akin to a wealthy car enthusiast with a large garage taking on Rolls-Royce, Bentley and Maserati, only on an even grander scale.

Grand is certainly a good way to describe the company’s first effort, a towering pleasure palace known as the Longreef 60 SX Flybridge, which stretches 18 metres from bow to stern, can sleep 10 adults and hits the market with a price tag of ‘just’ A$2.5 million.

While Longreef is ramping up its production with the 50 SX and 90 SX models expected to launch this year, the big and beautiful 60 SX represents the one and only vessel the company has so far completed and delivered. It was launched at the 2018 Sydney International Boat Show, where it was immediately snapped up by an Australian buyer, who has since explored much of our east coast cocooned in its staggering luxury.
The owner generously agreed to let us take his pride and joy for a spin around a sunny Sydney Harbour, a task that not even a journalist could seriously describe as work. 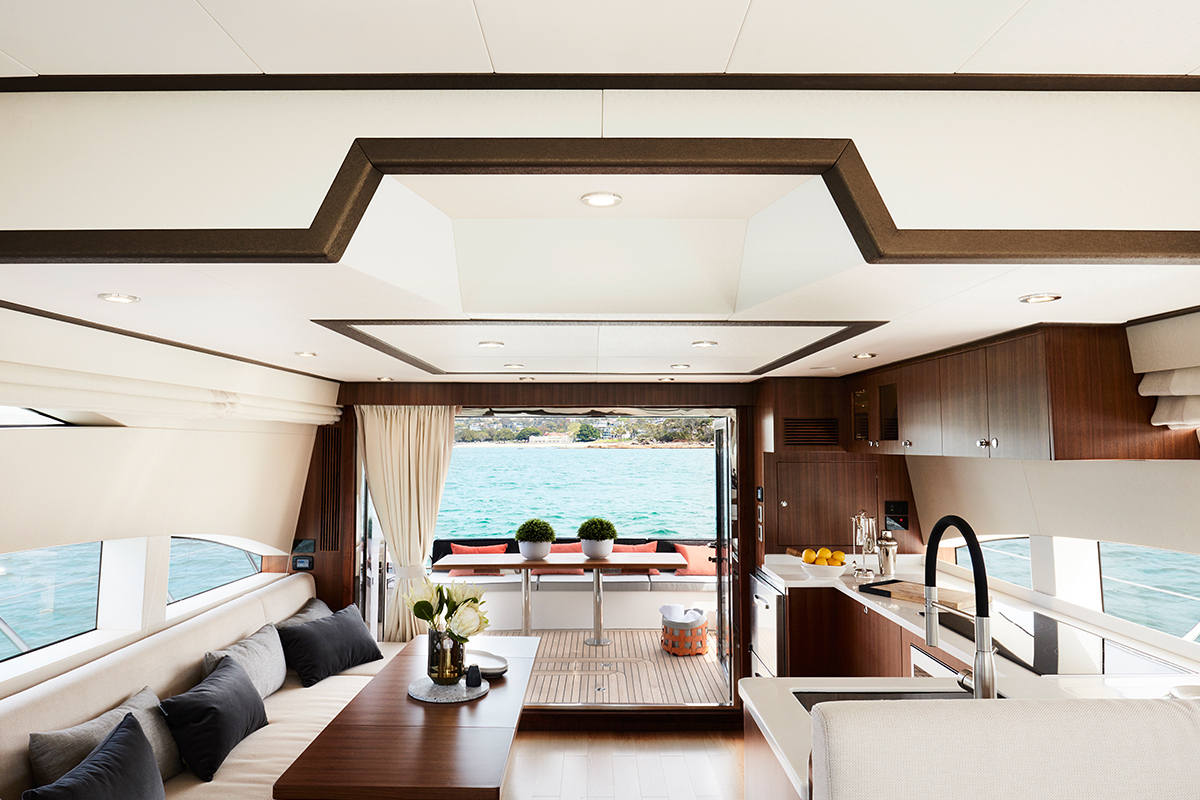 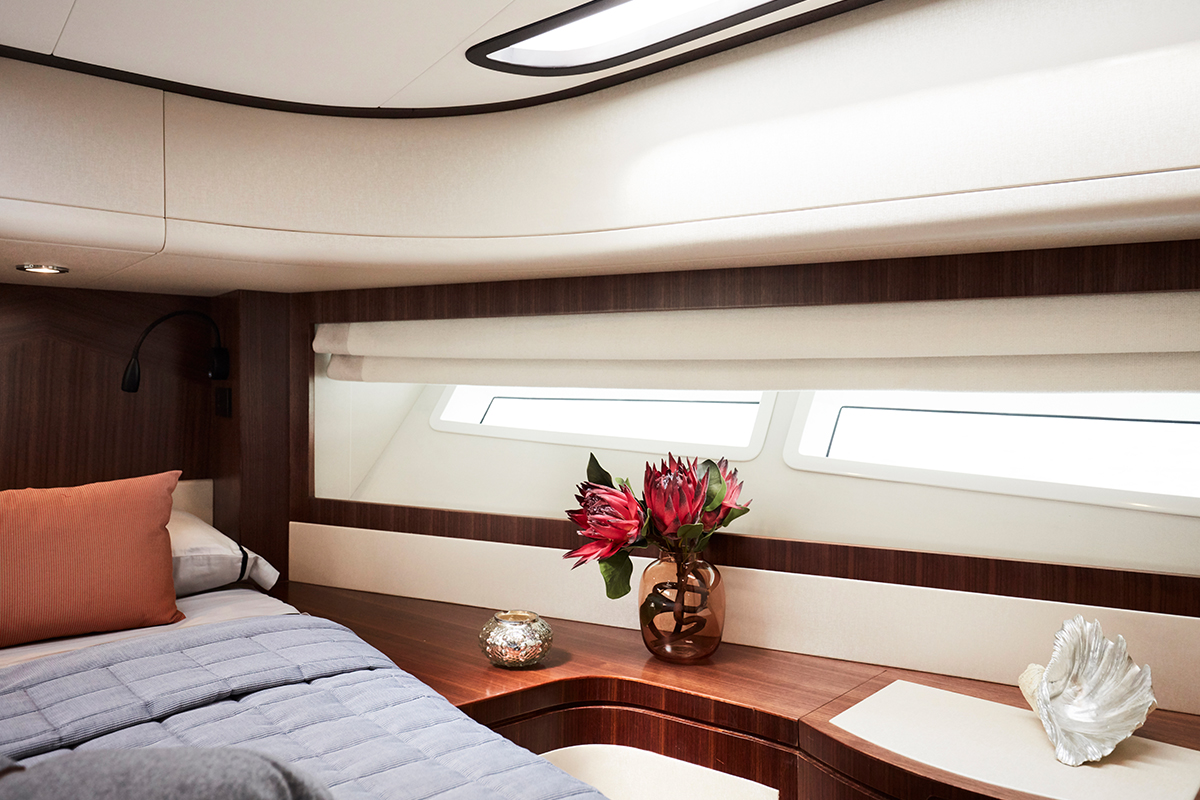 Piloting something as effortlessly powerful as this Longreef (it’s shifted by two Cummins six-cylinder engines, making 550hp each) is intimidating at first, but quickly becomes a hoot, particularly if you choose to pilot it from the helm up on the flybridge (there’s a second one downstairs, just in front of the wine fridge, for when conditions are less pleasant).

While some boats leave the skipper alone up there, Longreef recognises that it’s nice to be able to entertain and drive at the same time. With this in mind, there are two giant mattresses beside the tiller and a giant dining table that can seat 12 – and can be hydraulically lowered and scattered with cushions to form a Caligula-scale day bed – just behind you, with the whole shebang covered under a vast roof.
Below you, on the front deck, are two fantastic, adjustable sunloungers, complete with drink holders, and given the choice, most people would happily spend their days down there and let someone else do the driving. 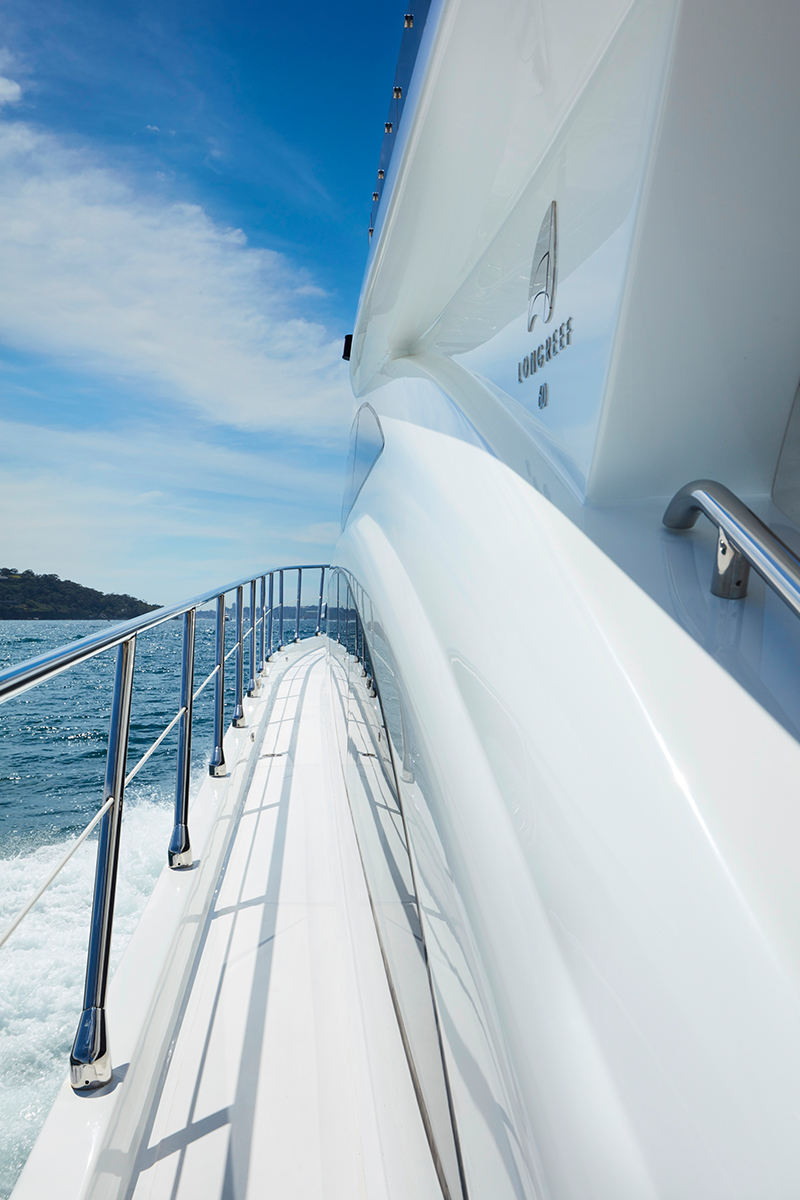 The Longreef is filled with thoughtful, stylish and practical touches, like a massive timber rear swimming platform, wooden floors in the vast living area, two large staterooms downstairs and functioning portholes in the shower (for a nice breeze and to avoid mould build-up). That’s because it’s been designed by a man who knows what Australian boat buyers like – and hate – better than anyone; Andy Young has been running Boating Syndication Australia for more than a decade and has thus heard the gripes and the babbling ravings of literally hundreds of boat users. It struck him that, despite the fact that the market for luxury cruisers is filled to the brim with established and experienced brands, no one single boat has ever seemed to get everything right.

His bold presumption was that, using the input of all those customers over all those years, he could come up with something that would make (almost) anyone happy. Plush white carpets, for example, look great in a boat’s living areas, but Young knows that after a year or two, owners get hugely sick of having to replace them over and over again, hence the timber floors in high-traffic areas.

Similarly, lots of large screens might look expensive and impressive on your helm, but they really aren’t necessary, and again, they often need replacing, so this boat makes do with just one, matched with some retro analogue dials.

With more orders confirmed and production already underway on even bigger Longreef efforts, the company hopes that if it can make a splash in Australia by providing cleverly thought out boats with lower maintenance costs and more reasonable price points, it will be ready to take on the big boating world.