The world has been shaken by anti-racism protests in America. Now important messages are being shared by global leaders. 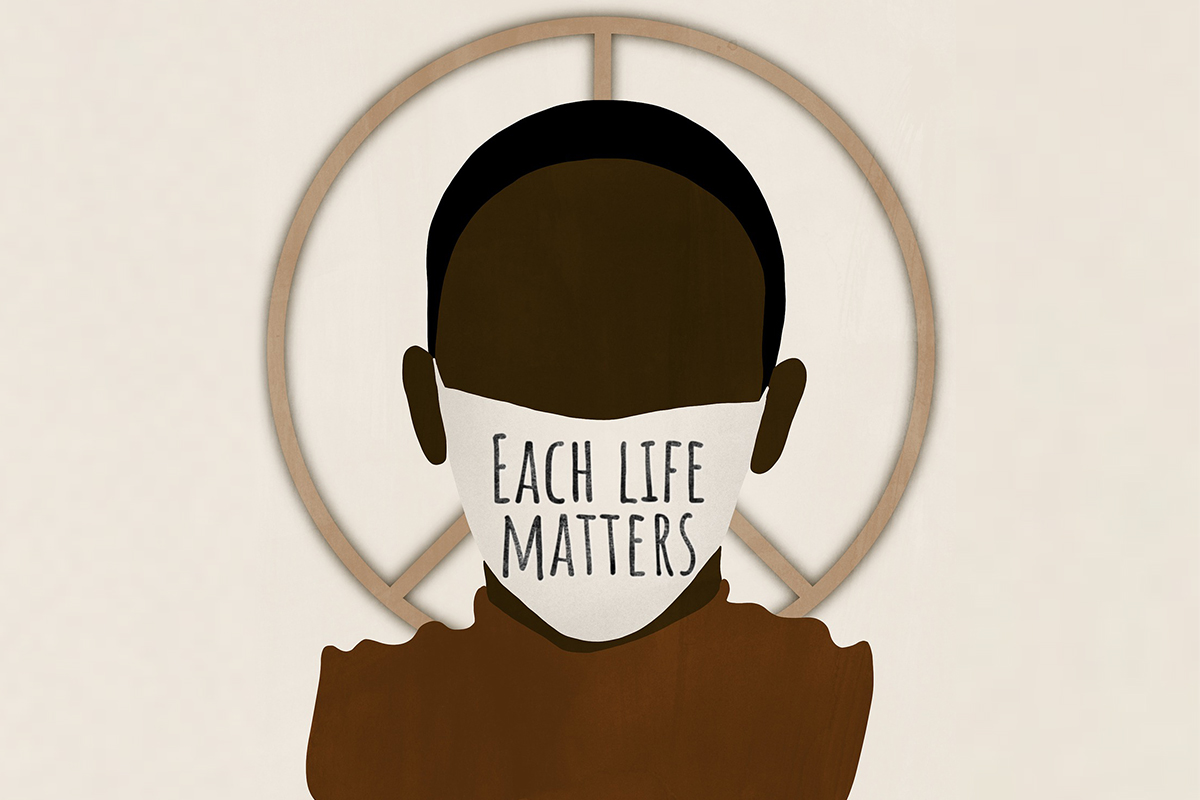 The brutal vision of George Floyd’s final moments alive have angered and shocked the world.

Fierce emotions of exasperation have exploded across the US as protests enter their second week nationwide, with many other Black Lives Matter protests erupting across the world – all in a desperate attempt to not let Floyd’s death be in vain.

The 46-year-old African-American died of asphyxiation at the hands of police in Minneapolis, US, 25 May, after an officer handcuffed him and knelt on his neck for several minutes, despite Floyd saying he couldn’t breathe.

Millions around the world have voiced their support for the anti-racism movement, promising to stand alongside the black community in solidarity and unity, and hoping to evoke change.

“We stand with the black community – and all those working towards justice in honor of George Floyd, Breonna Taylor, Ahmaud Arbery and far too many others whose names will not be forgotten,” Mark Zuckerberg wrote. “We need to know George Floyd’s name.”

“I hope that as a country we can come together to understand all of the work that is still ahead and do what it takes to deliver justice – not just for families and communities that are grieving now, but for everyone who carries the burden of inequality.”

They’re the painful words that torture Toni Townes-Whitley – an executive at Microsoft.

In a message shared on the tech giant’s social media, the President of US Regulated Industries says, “These three words haunt me, my family, my community and this country. I’ve uttered them aloud and silently so many times throughout my life, as have most Black people I know.

“We need to treat racism like the systemic pandemic it is, and come together to mobilise, dialogue and actively work to flatten the racism curve, enabling all of us to breathe freely.”

The popular multinational corporation is known for its trademark Just Do It but in support of its anti-racism campaign, Nike has transformed the slogan into a powerful message.

Just four days after Floyd died in police custody, the sports brand released a confronting video imploring “For once, Don’t Do It”.

Let’s all be part of the change. ⠀ ⠀ #UntilWeAllWin

Set on a black background with white text, the moving message was incredibly simple but extremely compelling.

It’s not the first time the business powerhouse has shown a socially conscious side. In 2018, Nike released a thought-provoking yet controversial ad featuring Colin Kaepernick, who drew attention to police brutality and racial inequality when he kneeled during the US national anthem at a game in 2016.

More than a week after Floyd’s death, the global luxury fashion group has announced it will donate funds to the NAACP and Campaign Zero. 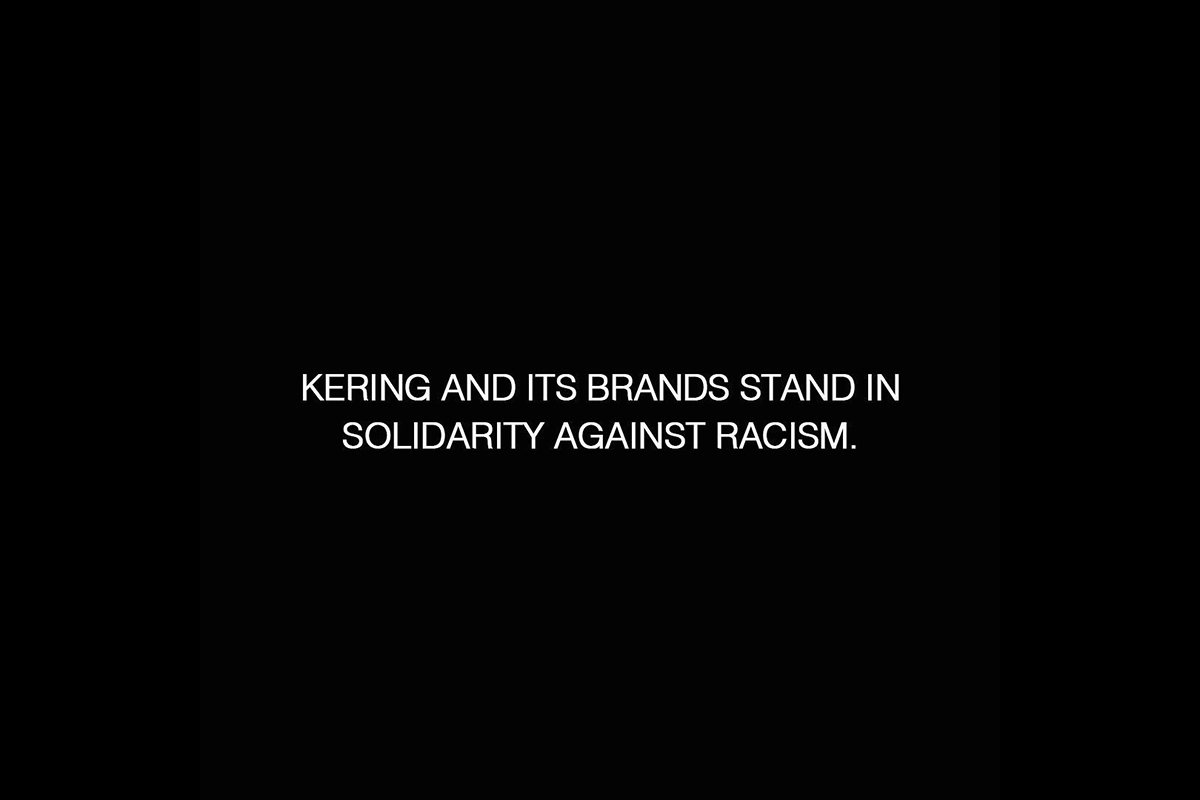 The undisclosed sum will be given to the organisations to fight and eliminate race-based discrimination in the US while also helping to reduce police violence.

Kering, which is the umbrella to brands including Gucci, Balenciaga, Pomellato and Ulysse Nardin, posted a series of simple black and white statements in support of amping up discussions around inequality.

“Kering and all its brands stand in solidarity against racism,” the post reads. “Too many black lives have been lost in the fight for equality in America. We will not stand silently.”

The multinational conglomerate is one of the biggest tech companies to speak out about racism.

In a statement image with a plain black background and simple white text, Amazon called for unity across the US. 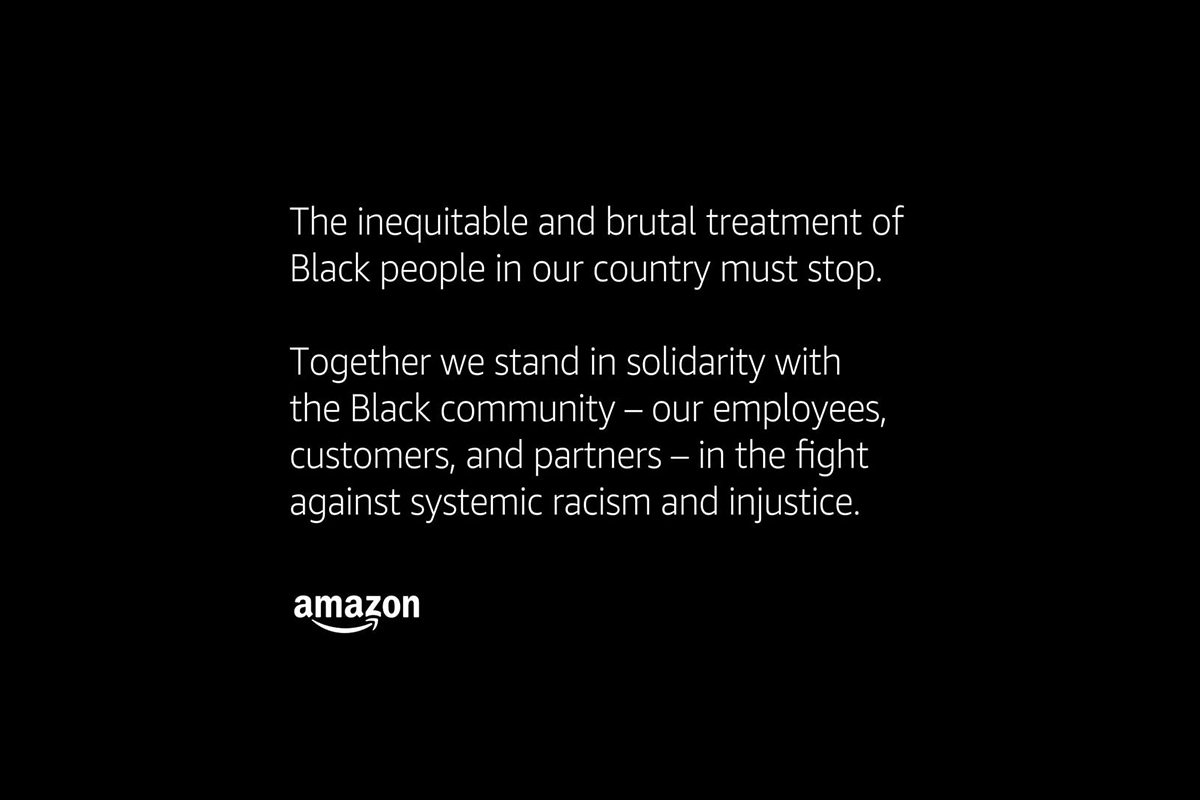 “The inequitable and brutal treatment of black people in our country must stop,” it says. “Together we stand in solidarity with the black community – our employees, customers, and partners – in the fight against systemic racism and injustice.”

Amazon Prime Video also made a statement on the social issue.

“Together we stand with the black community – colleagues, artists, writers, storytellers, producers, our viewers – and all allies in the fight against racism and injustice. #BlackLivesMatter,” the post reads.

“To be silent is to be complicit. Black lives matter.”

The streaming service shared this message on Instagram days after US protests escalated across the country. 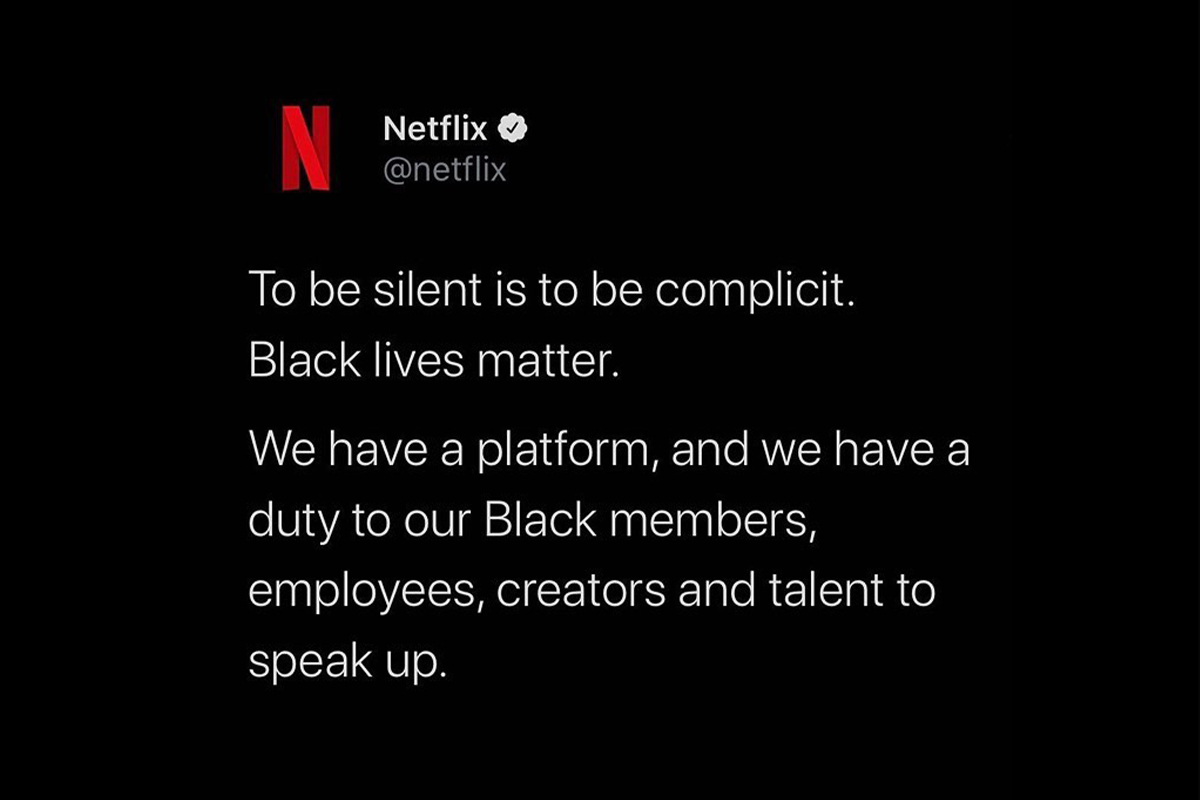 “We have a platform, and we have a duty to our black members, employees, creators and talent to speak up,” Netflix wrote.

The popular platform is no stranger to content about racial injustice. In 2019, Netflix produced When They See Us, a confronting TV miniseries about a 1989 assault case in New York City where five African-American boys were wrongfully charged over a violent assault. Their convictions were vacated in 2002 and reached a legal settlement with the City in 2014.

The social media giant has announced it will donate US$10 million to organisations fighting racial inequality.

Almost a week after protests erupted across the US, Facebook Co-Founder Mark Zuckerberg shared a message to his followers. 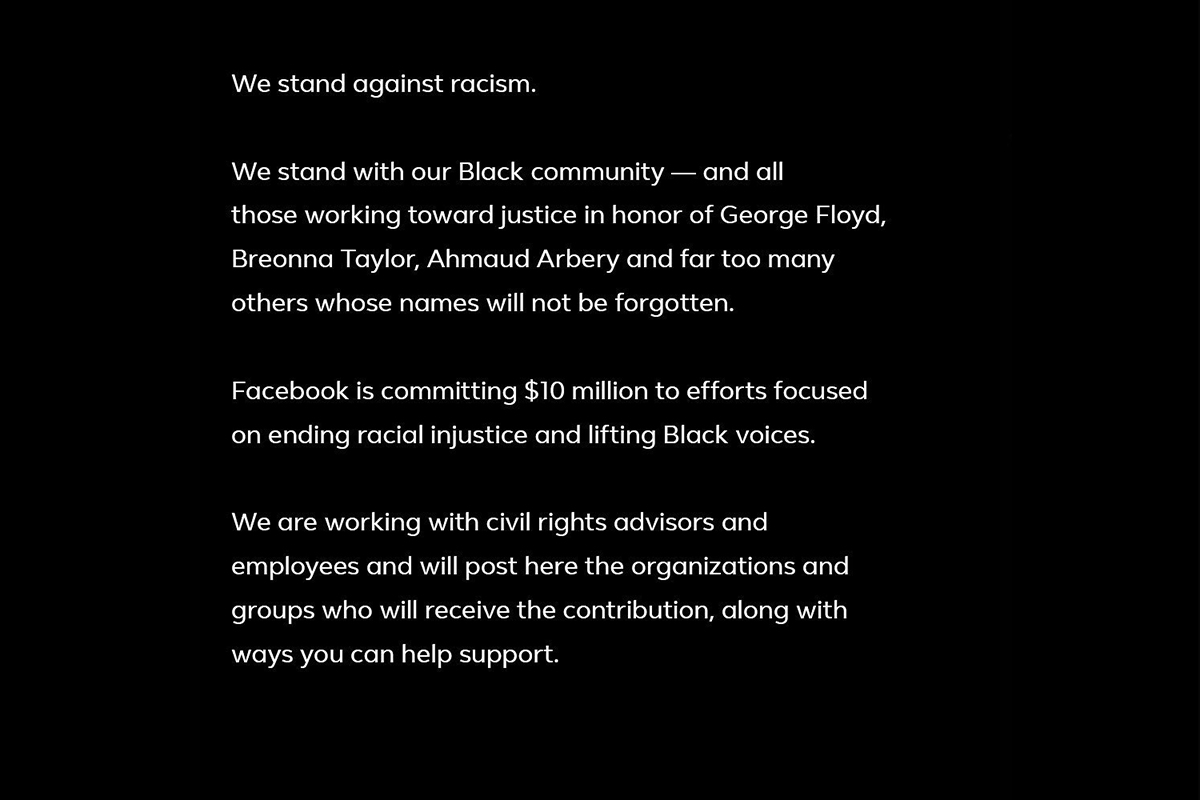 “The pain of the last week reminds us how far our country has to go to give every person the freedom to live with dignity and peace,” he wrote. “It reminds us yet again that the violence black people in America lie with today is part of a long history of racism and injustice.

“We all have the responsibility to create change.”

The billionaire acknowledged that US$10 million won’t fix the problem, instead sustained efforts across “many years to come” will help communities deliver justice.

“I haven’t talked much about our work on this, but the Chan Zuckerberg Initiative has been one of the largest funders, investing about US$40 million annually for several years in organisations working to overcome racial injustice,” he wrote. “This week has made it clear how much more there is to do.”

The stylish apparel company is donating US$100,000 to the Minnesota Freedom Fund following Floyd’s devastating death.

“We haven’t always got it right,” Lululemon shared online. “Over the years it made us question if we had a right to speak up. And we are privileged to have a voice and a platform. 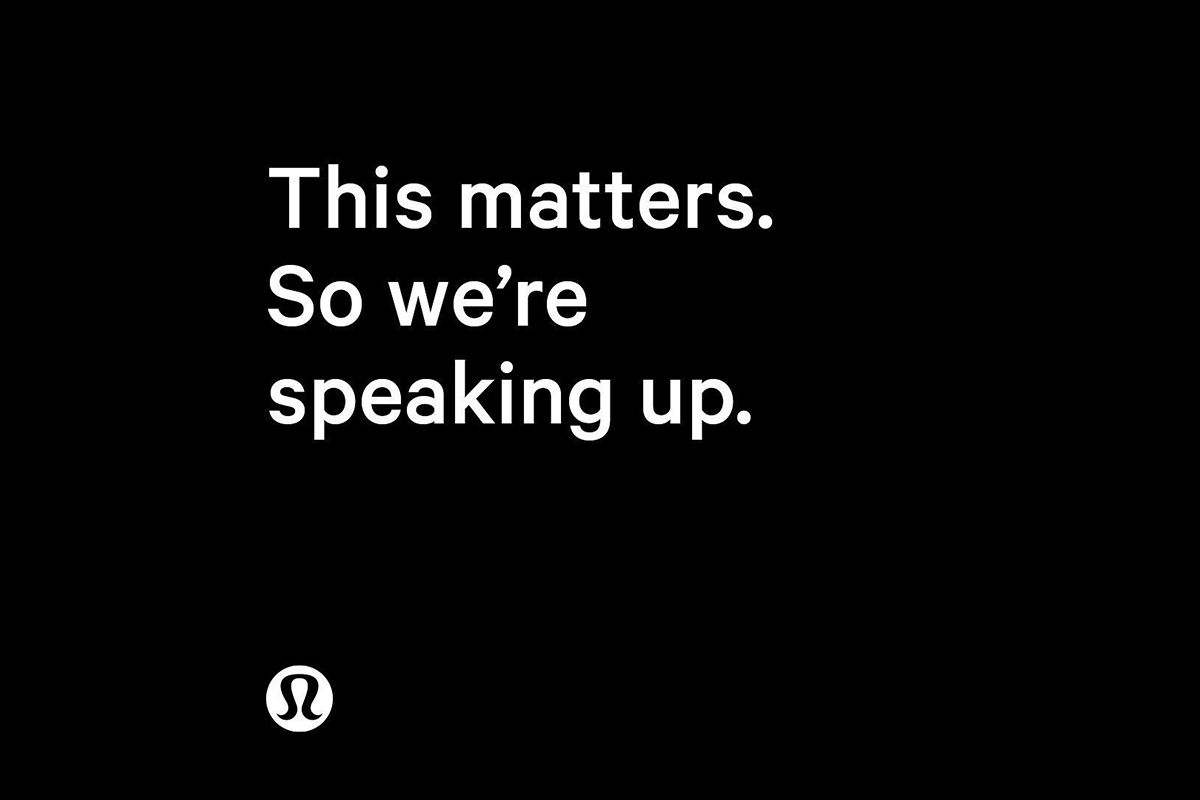 “Know we are not indifferent. Far from it. We are passionate about every single human being valued.”

The popular athleisure brand, which was founded in 1998, explained that words are powerful but “they are not enough”. Encouraging people to take action, Lululemon shared a list of actions that can be taken to continue the important conversation of inequality.

From investing in education and changing behaviours to embodying a diverse representation, the Canadian-founded company announced it will “no longer rely on people of colour to educate us on what to do; we will educate ourselves”.

Striving to amplify black voices, Gap has thrown its support behind the cause across social media.

The fashion outlet announced, “We must stand united. Because together we are stronger. Together we create change.”


The company, along with other Gap Inc brands Athleta, Banana Republic and Old Navy, has donated US$250,000 to support The NAACP and EmbraceRace.

“Stand up. Stand beside. Stand in front. Stand behind. Stand united,” Gap shared.

To recognise Blackout Tuesday, Rihanna’s collection of Fenty brands closed their doors for one day.

“We are not staying silent and we are not standing by,” Fenty announced. “The fight against racial inequality, injustice and straight up racism doesn’t stop with financial donations and words of support. 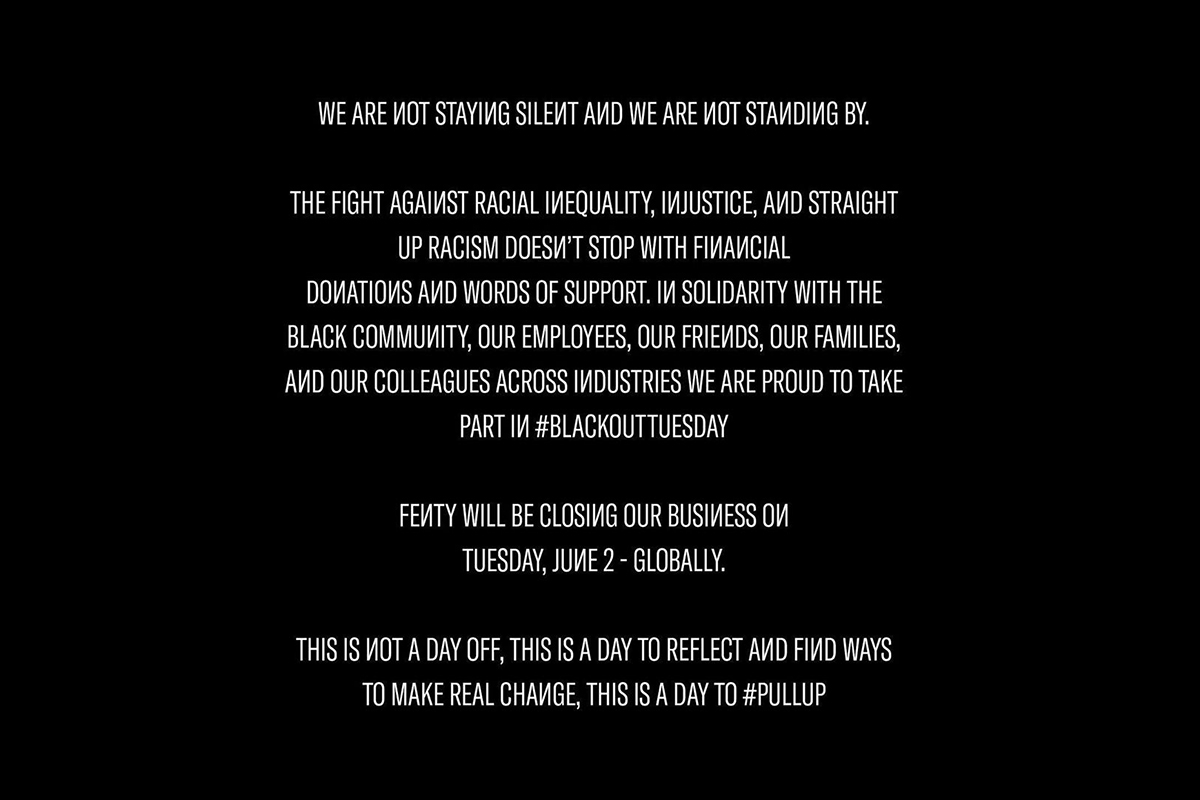 “In solidarity with the Black community, our employees, our friends, our families and our colleagues across industries, we are proud to take part in #BlackoutTuesday.”

The company, which was founded in 2017, closed its global business on 2 June and did not accept any sales.

Founded by Sara Blakely in 1998 to support women, Spanx continues its journey to make the world a better place.

The company pledged US$100,000 to US organisations including Black Lives Matter, the NAACP Legal Defense and Educational Fund, and the Minnesota Freedom Fund. The successful business is also donating US$100,000 to Atlanta-based organisations focused on combating racial injustice.

“We always aim to be a source of bright light and positivity in this world,” Spanx shared online. “Today, we cannot ignore the injustices and darkness of our outside world.

“We share your outrage and sorrow over the injustices that led to the tragic loss of the life of George Floyd, along with Breonna Taylor, Ahmaud Arbery, Tony McDade and so many more.

“It’s time to not only stand up for what’s right and speak out against racism, but to take action. We know that it’s in all of our hands to create a better world.

“The time for silence is over.”