From saving the elephants with Tiffany & Co. and Doutzen Kroes to educating young women with Lancôme and Kate Winslet, iconic stars and designer brands have linked arms to help create a better world. 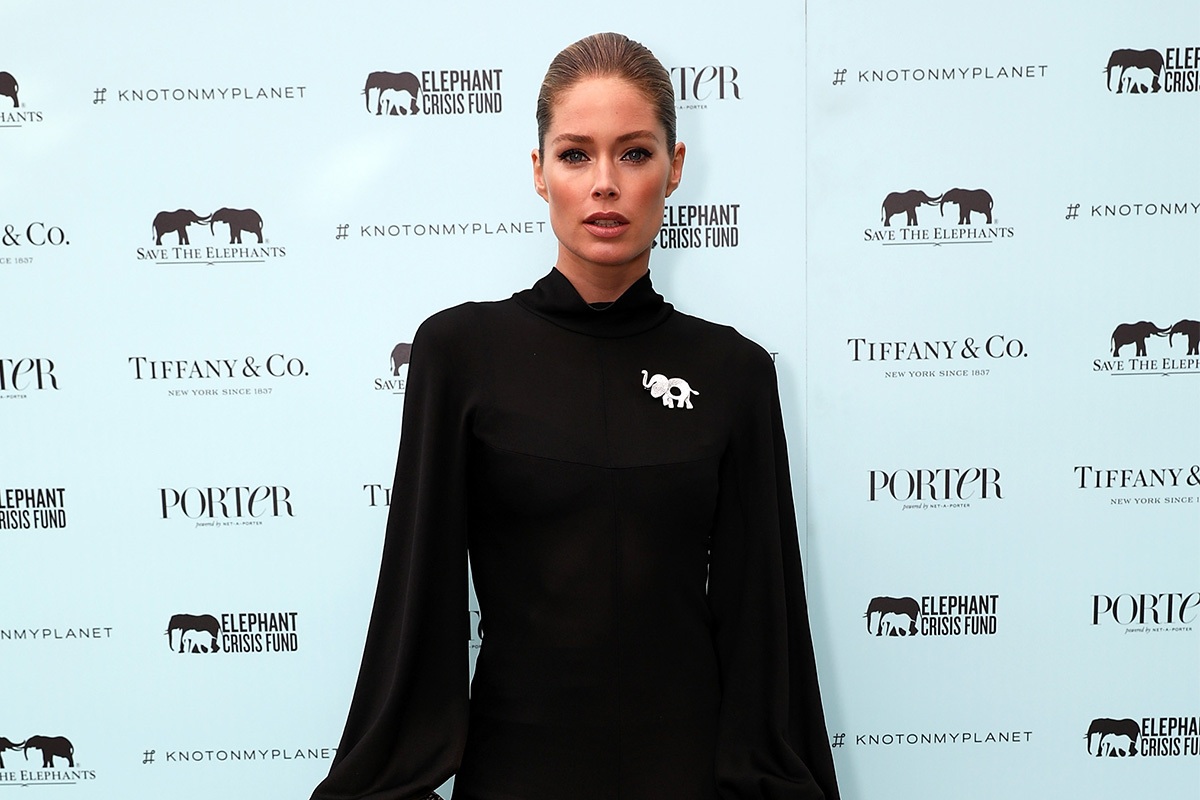 Whether it’s saving the elephants, educating young women or feeding hungry children, many designer brands have paired up with celebrities to help those less fortunate.

Fendi teamed up with five iconic women including Sarah Jessica Parker to design a special edition handbag where the proceeds went towards selected charities. The actress chose The Brain Trauma Foundation that helps improve patient outcomes and clinical research.

Last year Dior and Rihanna linked arms to support women’s education through the singer’s own charity, Clara Lionel Foundation, which aids health clinics and emergency response units around the world.

Bill Gates, Richard Branson and Oprah are among a number of leading CEOs who contribute both time and money to support charity work whether the aim is to bolster global health care organisations or striving to end extreme poverty.

The CEO Magazine is celebrating five of the most recent philanthropic collaborations between celebrities and luxury brands.

A dainty elephant brooch encrusted with fine pavé diamonds could mean the end of elephant poaching.

Using fashion to end wildlife torture, Knot on My Planet founder Doutzen Kroes has partnered with Tiffany & Co. to raise awareness about the mammal-culling industry through an eloquent collection of gem-embossed charms.

Deep in the concrete jungle of New York City, the luxury jewellery house launched the 2018 Save the Wild collection, which features elephant, rhinoceros and lion charms, to support the Wildlife Conservation Network including the Elephant Crisis Fund.

“We have always been inspired by the natural world and see it as our moral duty to sustain the wonders of the earth,” Tiffany & Co.’s website states. “Staying true to our word, we launched the Tiffany Save The Wild collection in 2017 and are excited to add new elephant, rhinoceros and lion designs.”

The US style empire says it will donate 100% of all proceeds and it will donate US$4 million by December 2019 to invest in anti-poaching, anti-trafficking and ivory demand reduction. The funds have already assisted minimising anti-poaching vehicles, ivory-detecting sniffer dogs and helicopters and planes that monitor elephant herds.

The charity addresses the violent culling of native African animals, where one elephant dies every 15 minutes, creating an ongoing nature crisis that could be impossible to return from.

“A fashion for ivory is the ultimate cause of the killing of elephants, however fashion can be part of the solution,” Kroes says.

Young women are being given the weapon of literacy by Oscar-winning actress Kate Winslet and Lancôme who are helping unleash their potential.

By the actress and the brand partnering with The National Literacy Trust, high school students in the UK will be able to tackle employment inequalities by unlocking skills to achieve their potential. 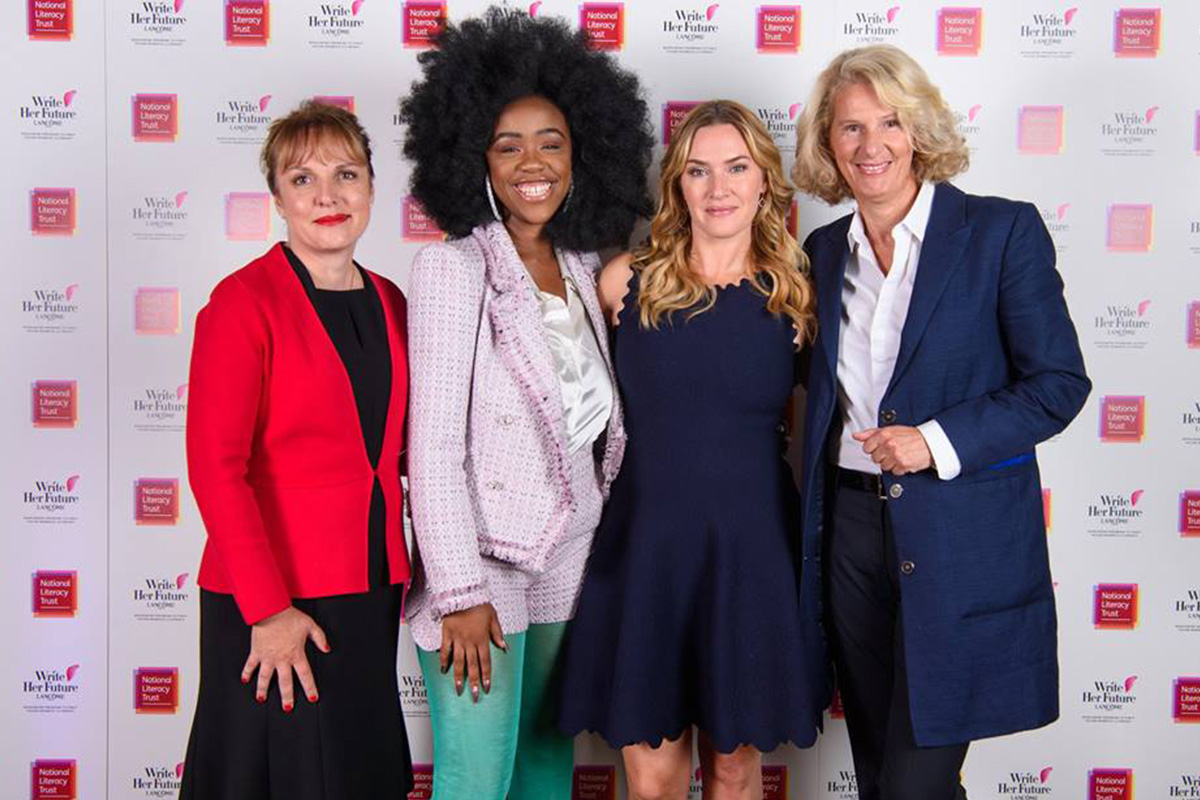 “Reading and writing, for most of us, is as natural as breathing,” Winslet says. “But for one out of every seven women in the UK it is not.

“Lancôme and The National Literacy Trust want to help disadvantaged women to be able to communicate effectively and help them to secure their first jobs.

“This is one of the reasons why I appreciate the relationship I have with Lancôme as, together, we share a deep-rooted desire to support women in being able to fulfil their hopes and dreams, and their individuality. This is our shared vision of empowerment.”

Launched on World Literacy Day, the new partnership – the first of its kind for the UK – plans to break down the barriers to success by giving young women literacy and communication skills to boost confidence.

The collaboration is a response to the overwhelming illiteracy figures, where 9% of young women aged between 16 and 24 years old are uneducated and 15% of adults in the UK, or 5.1 million, are “functionally illiterate”.

Michael Kors and Kate Hudson want a world without hunger

“If we’re going to create a better generation, it always starts with education and keeping kids in school.”

They are the wise words of Kate Hudson following a partnership to end world hunger with Michael Kors. 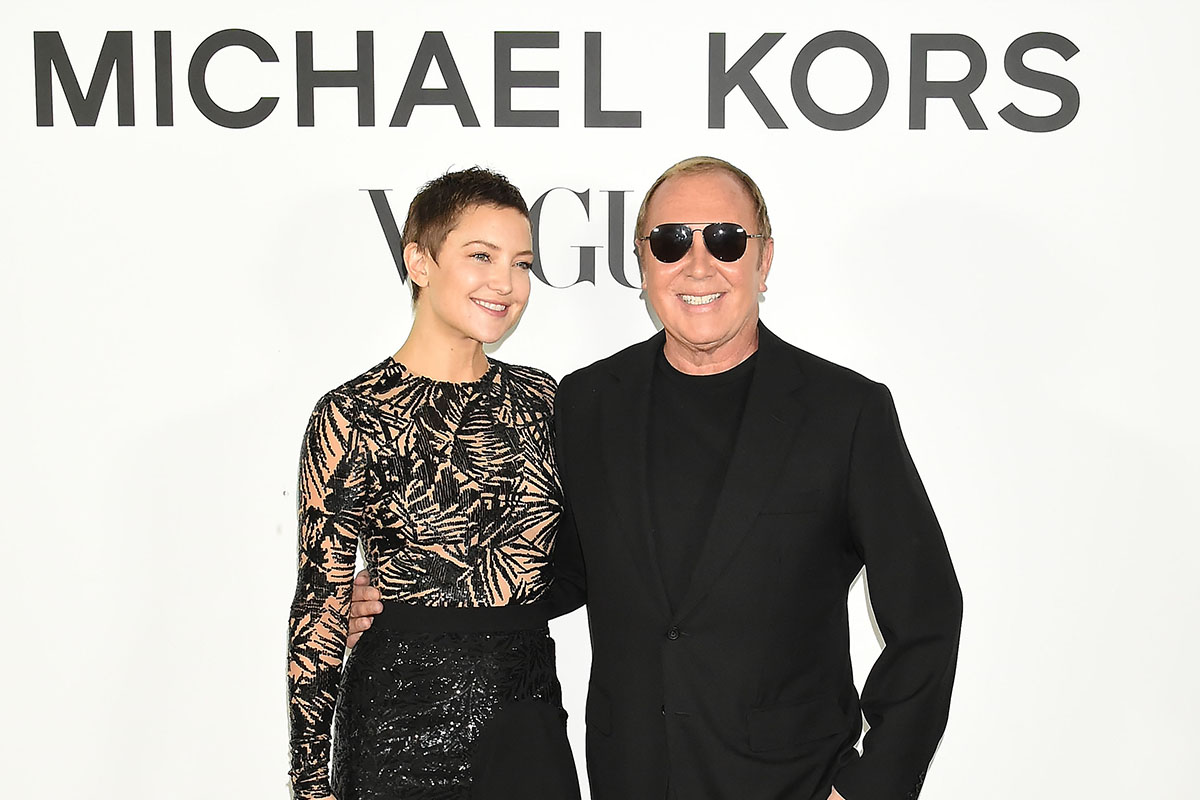 The Golden Globe-winning actress and designer joined forces with Michael Kors to feed children in a remote community in Cambodia in September 2017, a small step in a giant journey to create a world without hunger.

“No child can learn if they’re hungry, no child can focus if all they’re thinking about is their hunger,” Hudson said. “We need to invest in our children. One of the great ways to be able to help is to start with the fundamentals and that’s feeding children.”

The mission began in earnest back in 2014 when Hudson was invited by Kors to attend the Watch Hunger Stop campaign with him alongside the United Nations World Food Programme (WFP).

“There’s something so simple but so deeply important about what the World Food Program is doing and it’s not as simple as just feeding a child,” Hudson said. “They’re influencing how people create a self-sustaining environment for children and their schools.

“Kids go to school because they can eat, these local farmers have income. It allows these women and men to put their kids in school.”

The designer released the special edition Michael Kors Access Sofie smart watch featuring a Watch Hunger Stop digital face, and special edition cobalt blue and black Lon aviators, with a commitment that for every watch or pair of sunglasses sold, 100 meals go to the charity.

Deemed to be one of Europe’s most anticipated collaborations, Burberry and Vivienne Westwood have come together to support the rainforest charity Cool Earth.

The eccentric British designer joined Burberry to create a limited edition collection to raise funds for the environmental organisation in attempt to keep rainforests standing and reduce climate change. 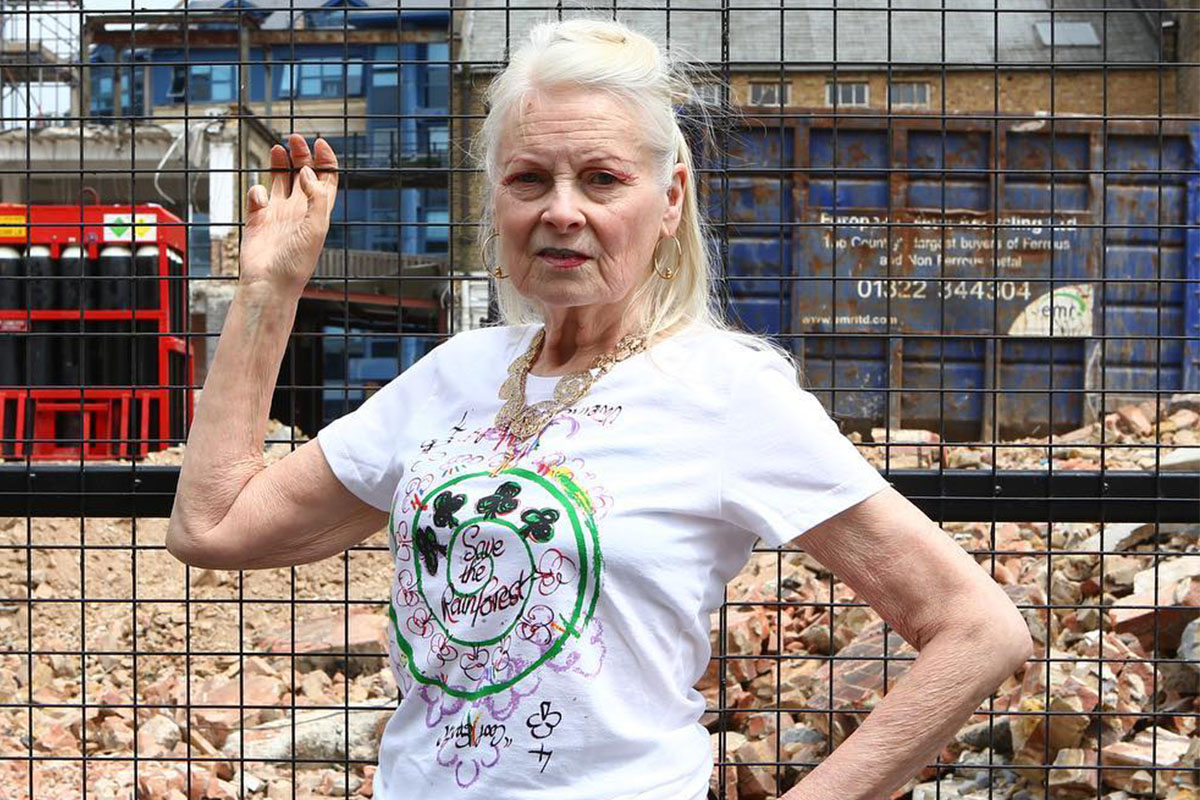 The partnership will be the first for the fashion house under Chief Creative Officer Riccardo Tisci and the exclusive range will launch in December 2018.

“Vivienne Westwood was one of the first designers who made me dream to become a designer myself and when I first started at Burberry, I knew it would be the perfect opportunity to approach her to do something,” Tisci says. “She is a rebel, a punk and unrivalled in her unique representation of British style, which has inspired so many of us.”

The rainforest conservation organisation has been working to protect the trees from Peru to Papua New Guinea since 2007.

“I’ve put my faith in the fantastic charity Cool Earth, which works with local people to protect rainforest that is vulnerable to loggers,” Westwood says. “And the good news is that it works.”

The fierce force of fashion is paving the way for children to have a life free of conflict, disease and natural disasters.

Louis Vuitton continues to work with UNICEF alongside the support of A-listers including Miranda Kerr, David Beckham and Mariah Carey. 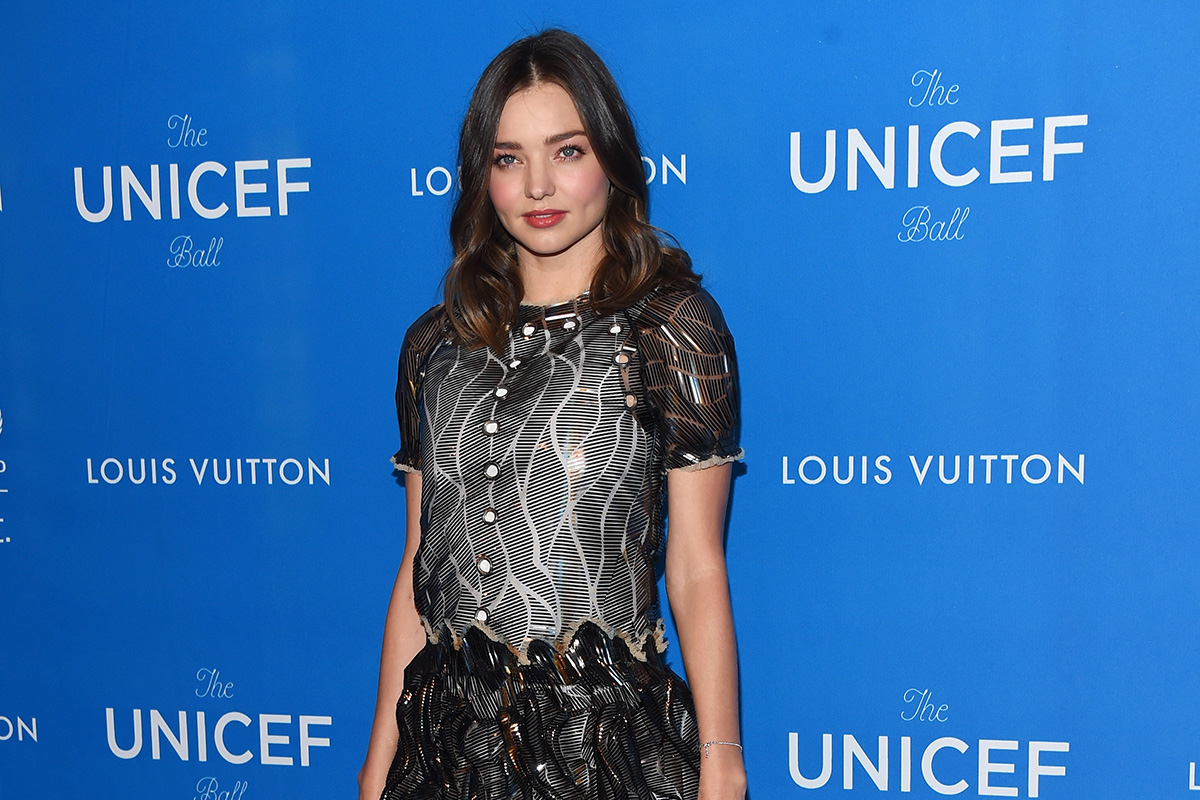 The fashion juggernaut began a relationship with the charity in 2016 and has raised more than US$5 million for vulnerable children through exclusive celebrity events and the special edition accessory Silver Lockit.

The delicate bracelet, inspired by Georges Vuitton in 1890, features a locket symbolising protection and was chosen to signify the promise of helping children in urgent need in countries including Syria.

“Partners like Louis Vuitton are critical to helping us reach every child, especially the most vulnerable children because every child deserves a childhood, a fair chance in life,” UNICEF Director of Private Fundraising and Partnerships Gary Stahl says.

“Every day, millions of children are experiencing violence, conflict and diseases. Now more than ever, the need to stand together for and with children is critical.”