Preaching to the converted

The biggest problem with convertibles is synonymous with their singular advantage – the roof. Stephen Corby finds out if the Aston Martin DB11 Volante is any different. 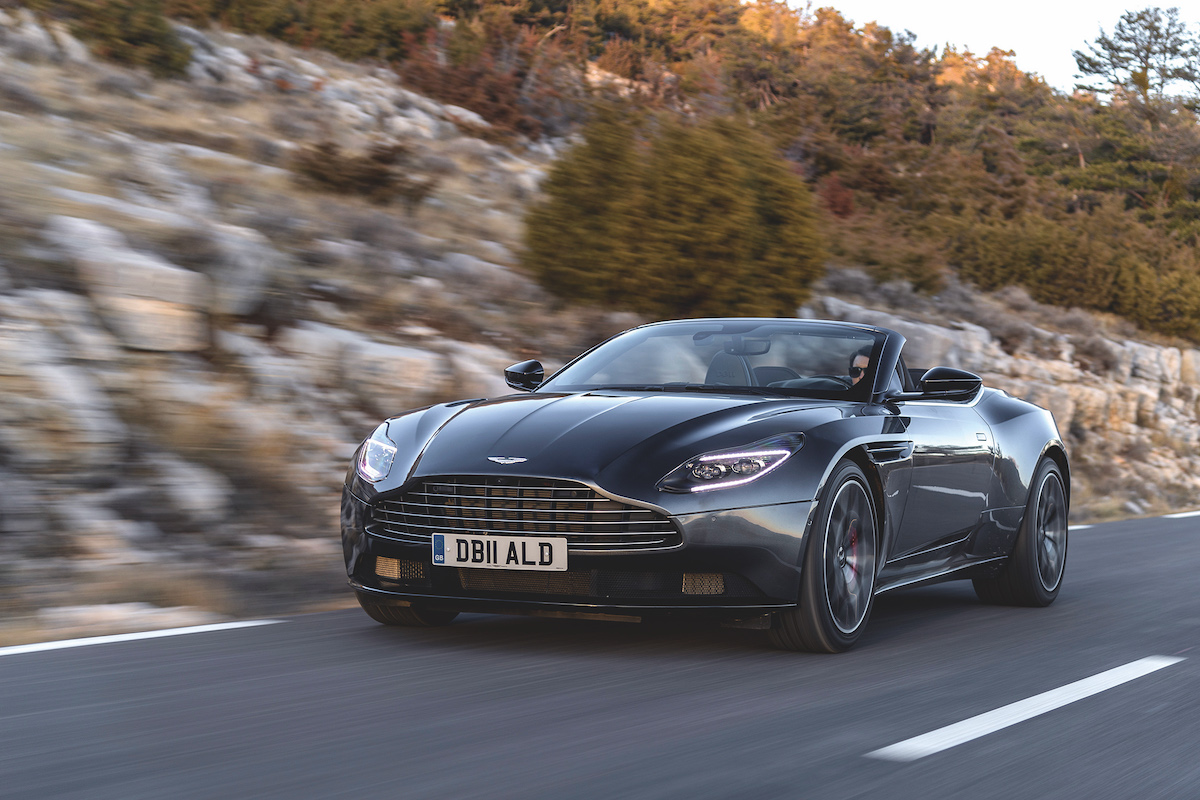 Dropping the top on your convertible on a balmy, dreamy summer evening – particularly if it has recently rained and you’re getting that eau d’evaporation scent – is one of life’s joys that too many people miss out on.

Even on brisk but sunny winter afternoons, feeling the wind burnishing your cheeks as you look up at something you can never fully appreciate in a roofed car – like the majesty of Sydney’s Anzac Bridge – can be pretty fantastic.

There are also those for whom the greatest advantage of going roofless is that it allows you, the fortunate driver, to be seen more fully by strangers. Convertibles are, quite simply, more Instagram-worthy when the roof is down.

Everything about the car has a scent of serious luxury about it, an aura of old-world British charm and bravura design.

Unfortunately, when the roof is up, even usually beautiful cars can suddenly look top heavy, or awkward – it’s a bit like putting a deerstalker on Margot Robbie, or a Make America Great Again hat on anyone.

And when the weather turns wild and aggressive, there are some convertibles that make you feel less than fully protected. There’s a sense that a hailstone might easily rip your vinyl covering asunder or that the whole roof might blow away.

In some cases, convertibles – or Cabriolets, Spiders, Spyders, Boxsters or Roadsters, as they are also known – can also feel a bit chilly, because there’s just not enough solid matter between your head and the outside world.

It’s a trade-off – along with the fact that they must also always be heavier than normal cars, thanks to the extra body stiffening required to allow the inherent weakening of the structure that comes with chopping off the roof – that people have long been willing to make.

Fortunately, at the very top end of the market, there are a very few regal rag tops that don’t ask you to compromise at all. One of the most appealing of these is the Aston Martin DB11 Volante, a car that looks almost as luscious as its name sounds.

The word ‘volante’ sounds both sensuous and spicy, until you google it, and find out that it can mean “flying” or “steering wheel” or even “Brazilian midfielder”. In Aston Martin speak, a language that would surely be pronounced with a crystal-clipped British accent, it means convertible. One of the features that makes its roof so special is that there isn’t much of it, as it only has to cover the small gap between that swift-lined and sloping windscreen and the DB11’s magnificently muscular, classic and yet modern, Aston rear end.

It somehow manages not to detract from the jaw-dropping looks of this bold masterpiece, and when it is up and you’re inside, it’s hard to believe you’re in a convertible at all. That’s because the roof is made of eight lustrous layers, the last of which, right above your head, looks and feels like the inside of an Aston should – plushly luxurious.

The whole thing looks – and feels – so solid that it’s hard to believe it’s all going to be able to lift up and fold away the first time you try it.

All of that sound-deadening thickness adds weight, of course, but then this DB11 already feels big enough to produce its own gravitational pull. At 4.7 metres long and weighing in at a truly hefty 1,870 kilograms, it’s a whole lot of car, but that’s as it should be, when you’re paying A$398,495.

That money does get you an awful lot of sense-spritzing titillation as well. Once the roof is down, you can really appreciate just how wonderful the interior is; from its shiny door-sill kick plates (emblazoned with the famous phrase ‘Hand Built In England’) to the seats, which don’t just look and feel fabulous, they smell delectable as well.

Indeed, everything about the car has a scent of serious luxury about it, an aura of old-world British charm and bravura design.

What is distinctly not British about this particular Aston Martin, however, is the engine – a 4.0-litre twin-turbo V8 built by Mercedes-AMG, a company that is the antithesis of English engineering because it is entirely German. Of course, Aston tweaks this magnificent Germanic powerplant, which makes an impressive 375kW and 675Nm, so that it feels and sounds like a DB11, not a Merc.

The result is a very gruff yet polished exhaust noise – as if they’ve somehow squeezed Brian Blessed under the car – and a deep well of performance. The DB11 Volante will hurl its considerable mass to 100km/h in 4.1 seconds, but with all that vehicle around you, and no roof above, it feels even faster.

The way the car feels in your hands is also suitably solid, because it’s a bit like driving a stately English home, a small castle or possibly something James Bond just stepped out of. 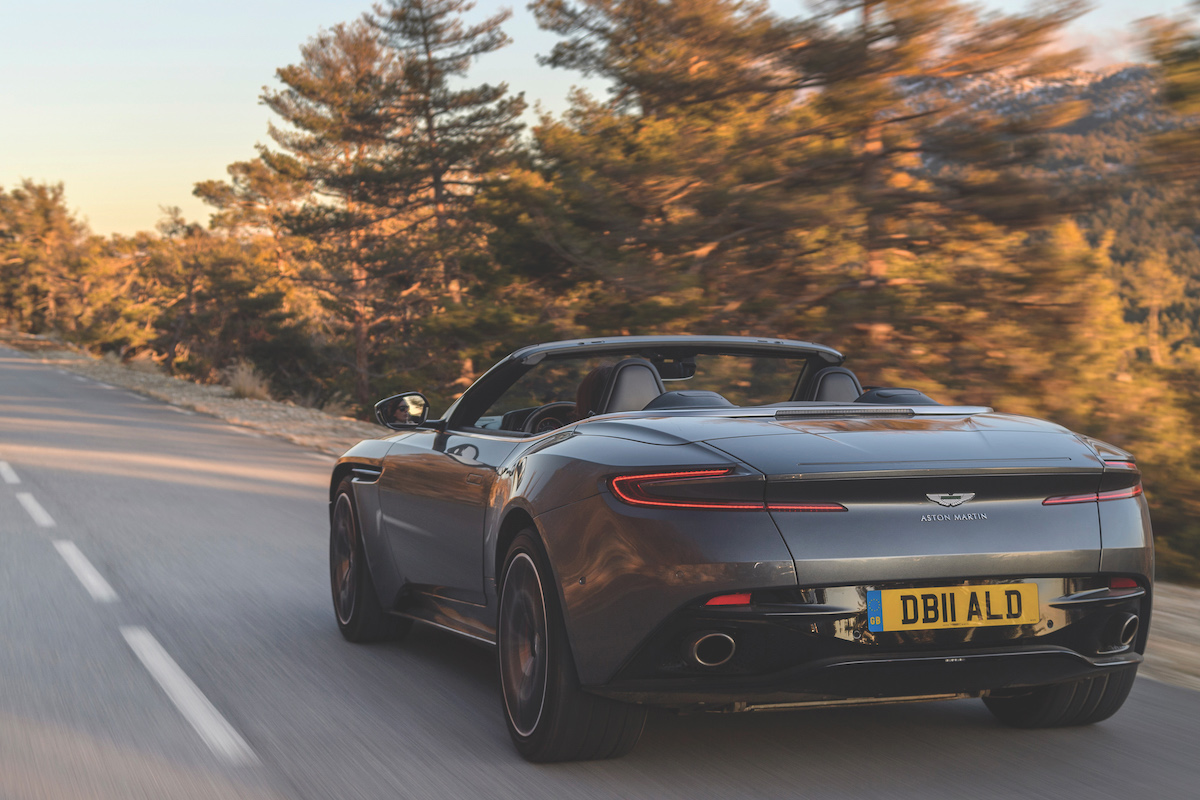 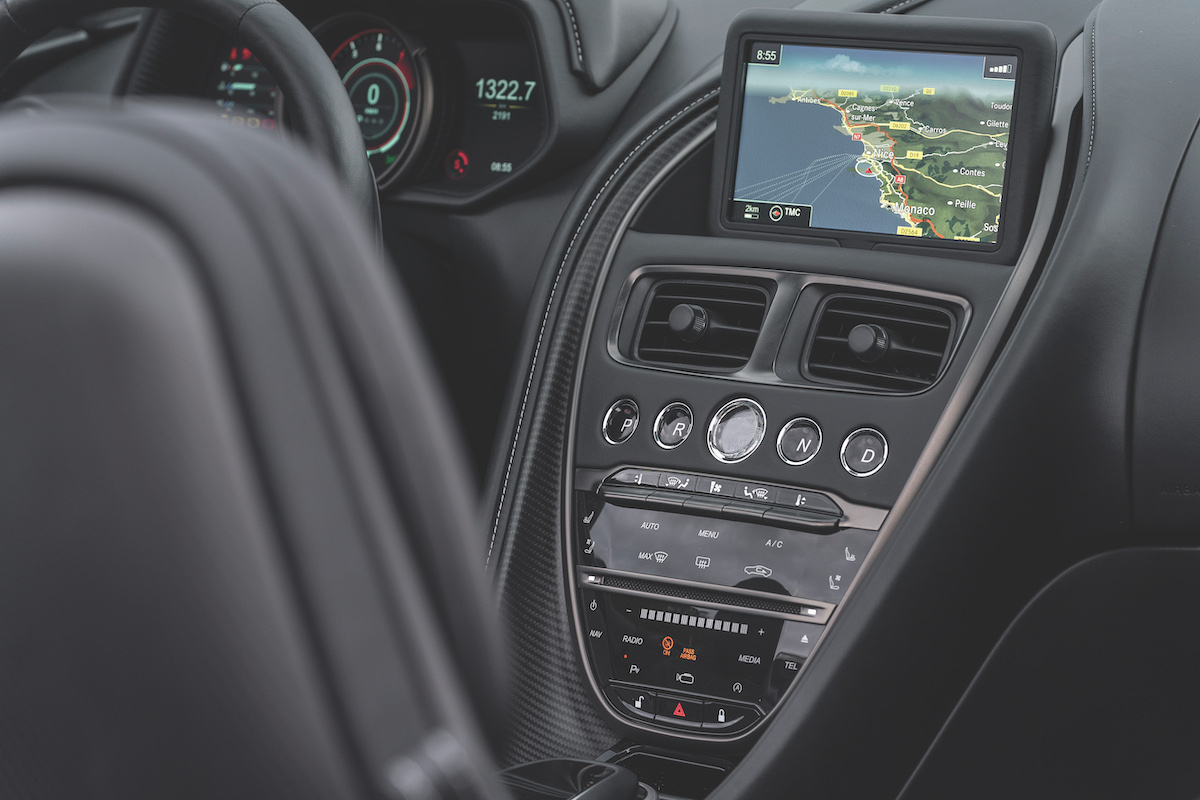 The steering is seriously weighty, to the point where it makes the DB11 feel even bigger than it is in parking situations, yet it feels absolutely right for the character of the car as you throw it into long sweeping bends, and all that weight hunkers you down to the Earth.

Even in winter, you’ll want to drive it top down, warmed as you are by the heated seats and steering wheel, and the fact that the aero keeps the buffeting of winds in the cabin to a minimum.

The Volante is no sports car, of course, because no convertible of its dimensions could be, and if you try to push it too hard and fast you’ll quickly remember just how much car you’re driving. Swift changes of direction tend to cause the kind of flustered response you get when you ask your butler to give you your tenth foot rub for the day.

But as a grand tourer or just a city cruiser, on the right day it comes close to being unparalleled, or at the very least unique.

There is a certain magic about Aston Martins, a visual splendour and a kind of aura, and the DB11 Volante just oozes the stuff, whether you’re driving it or just standing on the kerb staring at it agog.

It’s one convertible you’d have no problem buying or driving, roof up or down.