The new BMW X7 is big enough to live in

This is basically a BMW 7 Series limousine with all imaginable extras. Here’s what you need to know. Deep down, you know that your beloved children will move out eventually – perhaps you’ve even reached the point of praying for that day – but it comes as a bit of shock when they threaten to up stumps at the age of eight.

To be fair, my shock was also tinged with admiration when my delightful daughter announced that she was taking her favourite stuffed toys and some apples, and moving into the BMW X7 that was not so much parked out the front of our house as totally obscuring it.

I was pleased that she’d fallen so hopelessly in love with a properly classy car – the X7 is basically a BMW 7 Series limousine that’s been injected with a metric tonne of cheek filler and then placed on stilts – and I could also respect her logic. The BMW X7 is so vast, inside and out, that it’s actually slightly bigger than the inner-city house I force my daughter to live in.

(I had seen her this madly enamoured with a car just once before – the Tesla Model X – but that was a simple case of a child being hypnotised by a giant touchscreen bigger than her pillow.)

It’s also a lot plusher inside, with lashings of beautiful-smelling and wonderful-to-touch leather on the seats, all of them heated – even in the third row. This is the X7’s big advantage over a mere 7 Series, of course: the ability to carry seven people.

Normally, seven seaters are just five-plus-twos with no room for full-sized human beings in the third row. The X7 is almost unique in the amount of space and luxury the two people at the very back get; they even have their own sunroof and charging points, and generous leg room. Best of all, the giant rear doors and ingenious system for entry and exit, in which the second row of seats leap out of the way at the touch of a button, makes the whole thing a doddle.

Things are even nicer up front, where the driver is faced with beautiful screen interfaces that allow wireless use of Apple CarPlay, and even heated/cooled cup holders for the two front-seat occupants. That’s luxury.

All that interior space can only be achieved, of course, by building a vehicle that is absolutely humungous. The BMW X7 is exactly 2 metres wide (the same as a Lamborghini Aventador) and stands a hulking 1.8m tall. Throw in the fact that it is 5.15m long and you’re talking about not so much a land yacht as a land cruise ship.

Considering those vast dimensions, BMW’s designers have done an incredible job of actually making the X7 look attractive. It’s even got a bit of a sporty, sharp, get-out-my-way nose and sculpted flanks. Its 22-inch wheels are also hugely impressive. The outside still isn’t as sexy as the inside, but that would be too much to ask.

In the range-topping M50d variant we drove, the job of moving all 2,460kg of BMW X7 is given to a quad-turbocharged six-cylinder diesel engine that makes 294kW and 760Nm. Yes, 294kW from a diesel engine; I couldn’t believe it either. Nor is it easy to believe you’re driving a diesel at all from the driver’s seat, because the noise suppression is so impressive. Give it the full beans and it even manages to sound properly exciting, rather than angry and agricultural. 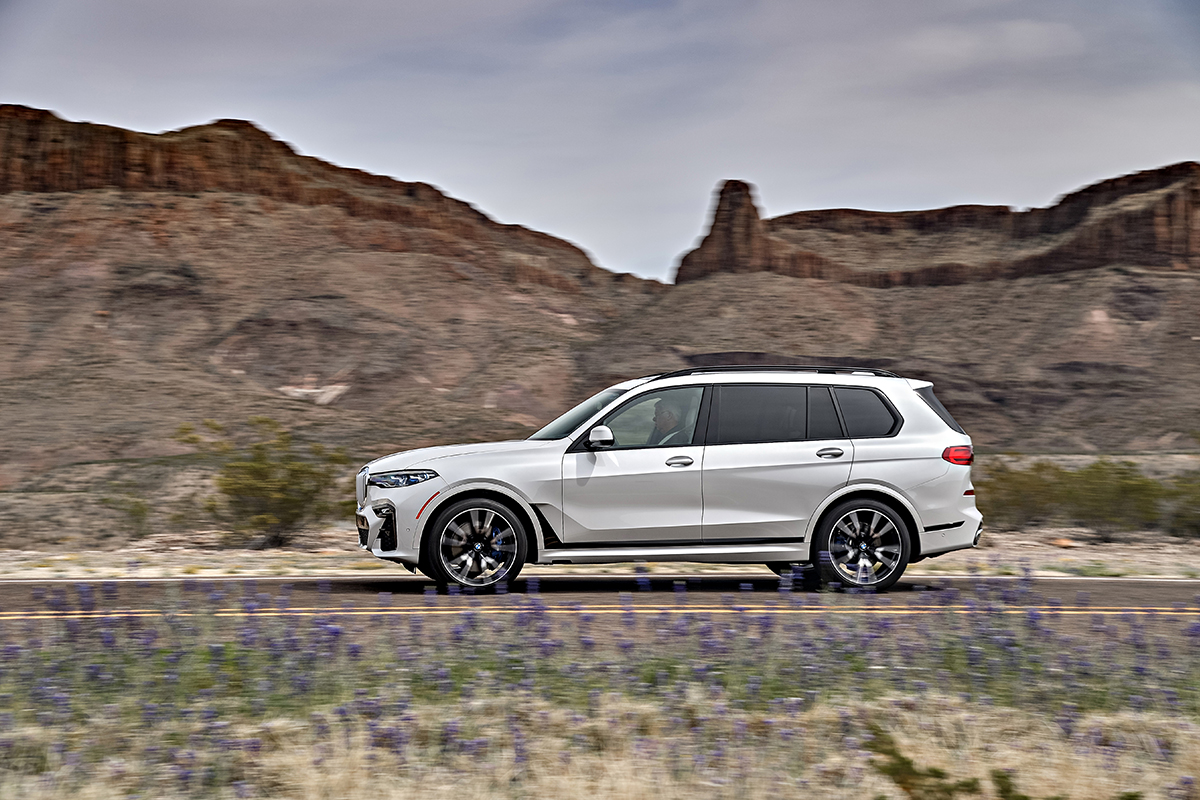 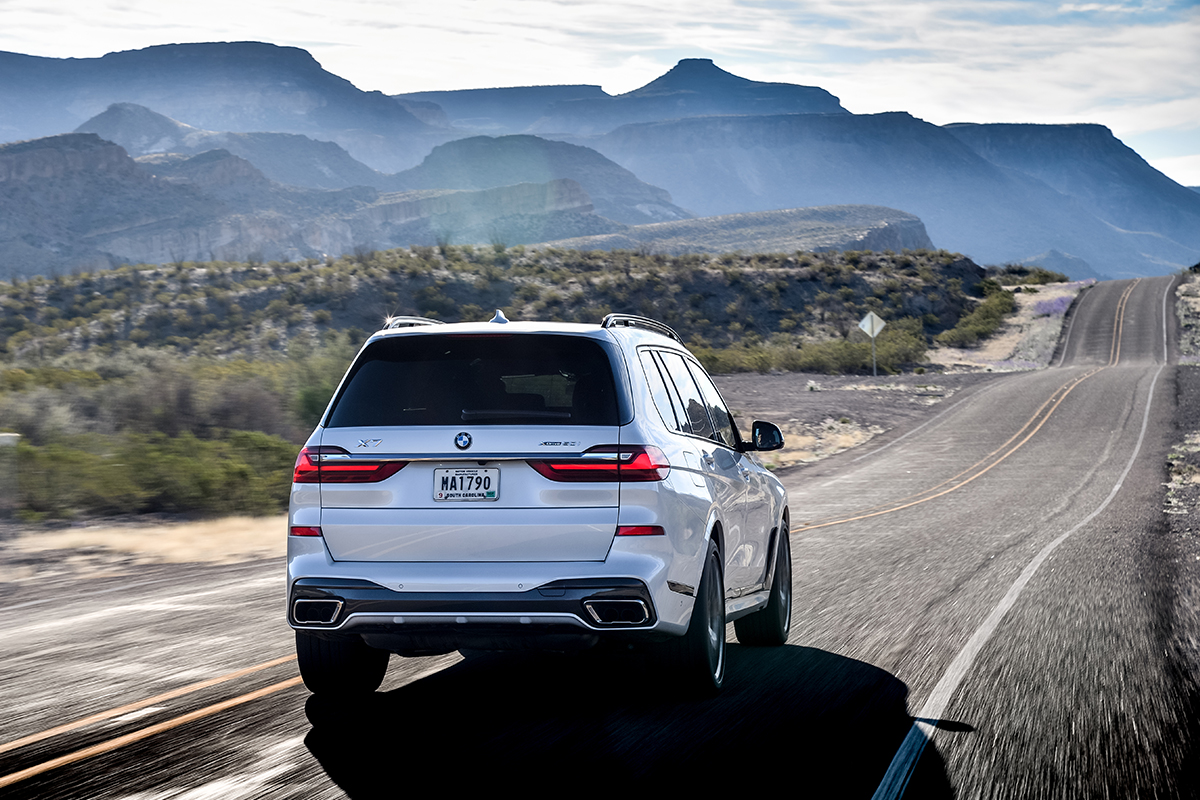 You certainly feel all that typical diesel torque when you plant your foot, however, because this M-badged X7 can really get up and go. Feeling this much SUV surging from 0–100km/h in just 5.4 seconds is an ever-so-slightly unfeasible experience.

The engine is so powerful, in fact, that it also has the ability to tow up to 2,600kg, which is 700kg more than a comparable X5. That’s a lot of polo pony.

The problem with driving the X7, of course, is that it’s simply too big for any modern city on Earth. Take it into a tight inner-city suburb and you’ll find yourself fainting at the wheel after 20 minutes, as you’re constantly breathing in every time a car approaches you. The 13m turning circle also turns three-point turns into 33-point ones.

On the plus side, a lot of traffic does seem to run away when it sees your intimidating shape coming, perhaps for fear of being crushed.

This is not to say that the X7 is unpleasant to drive, just that it’s hard to appreciate its clever and super smooth air suspension, its light yet muscular steering and its usable grunt when you’re worrying about just how wide two metres of car is.

It is out on the open road, then, that this car truly belongs and where it shines, with a surprising amount of driver enjoyment on hand.

The bad news for my daughter, of course, is that she’s a little bit short of the $169,900 asking price for the BMW X7 xDrive M50d. I’m a generous dad, though, so I’ll let her sleep in it until it’s time to take it back.