Jump into the passenger seat and we’ll take you for a ride in the limited edition GS F. Buckle up. 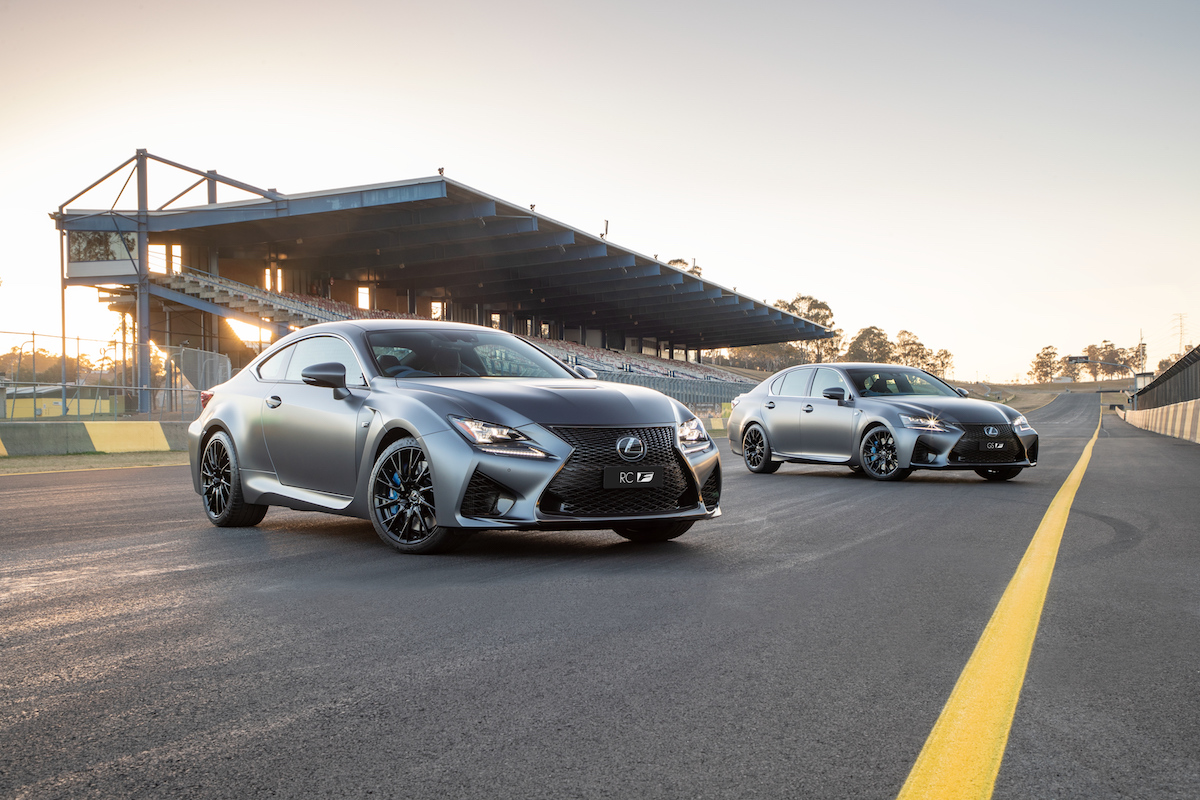 Some cars – Aston Martins and Bentleys in particular – are very much like iron fists in velvet gloves. The idea of wrapping something potent, powerful and slightly dangerous in the equivalent of a bespoke suit has long appealed to both prestige car companies and their customers.

Lexus, however, does things differently, which is why the GS F is actually more like an Iron Throne with soft cushions and cup holders. Or, to give it a more human face, it’s a bit like driving Mike Tyson (as he is now, aged 52).

The GS F we drove was particularly angry-looking because it’s a limited-edition, 10th Anniversary special, which means its leering, gap-toothed mouth is wrapped in a flat, matte-grey paint job – we’re talking Tyson in a shiny Hugo Boss suit.

The look sits perfectly on the lumpy Lexus’s muscular curves and matches its no-nonsense stance, while the carbon-fibre highlights and black alloy wheels with blue brake calipers really finish it off. The GS F turned a lot of heads, and camera phones, and won us some enthusiastic thumbs from passersby as well.

Inside, however, the 10th Anniversary (celebrating 10 years of Lexus’s F Line, the designation for its sportiest models) gets a more pimped and preened feel, with lashings of Competition Blue leather on various parts of the dash, steering wheel, seats and gear knob, plus a few snazzy carbon panels. It’s about as subtle as a Tyson punch in the face, frankly, but I must admit I kind of liked it, and the materials do feel pleasant to the touch. What you’ll wish you never had to touch is the antiquated and annoying controller Lexus still insists on using to operate the various functions on its giant central screen. Switching between music sources or using the satellite navigation requires you to use a mouse-like device that operates a frantic and frustrating cursor.

It’s possible that you might get used to it after a month or two, but I wouldn’t want to. The touch screen in a Tesla makes the Lexus system look like a rotary-dial telephone. Fortunately, voice control allows you to avoid interacting with it, some of the time.

Drive time in the GS F

Frustrations are quickly forgotten once you push the start button and the grunting 5.0-litre V8 growls furiously to life.

And then, almost as quickly, it seems to clear its throat, apologise and takes up a polite burble. This is a sporty car, yes, but it’s also very much a luxury sedan, and its default position seems to be quiet, plush progress, which is slightly at odds with how very mean and punchy it looks. 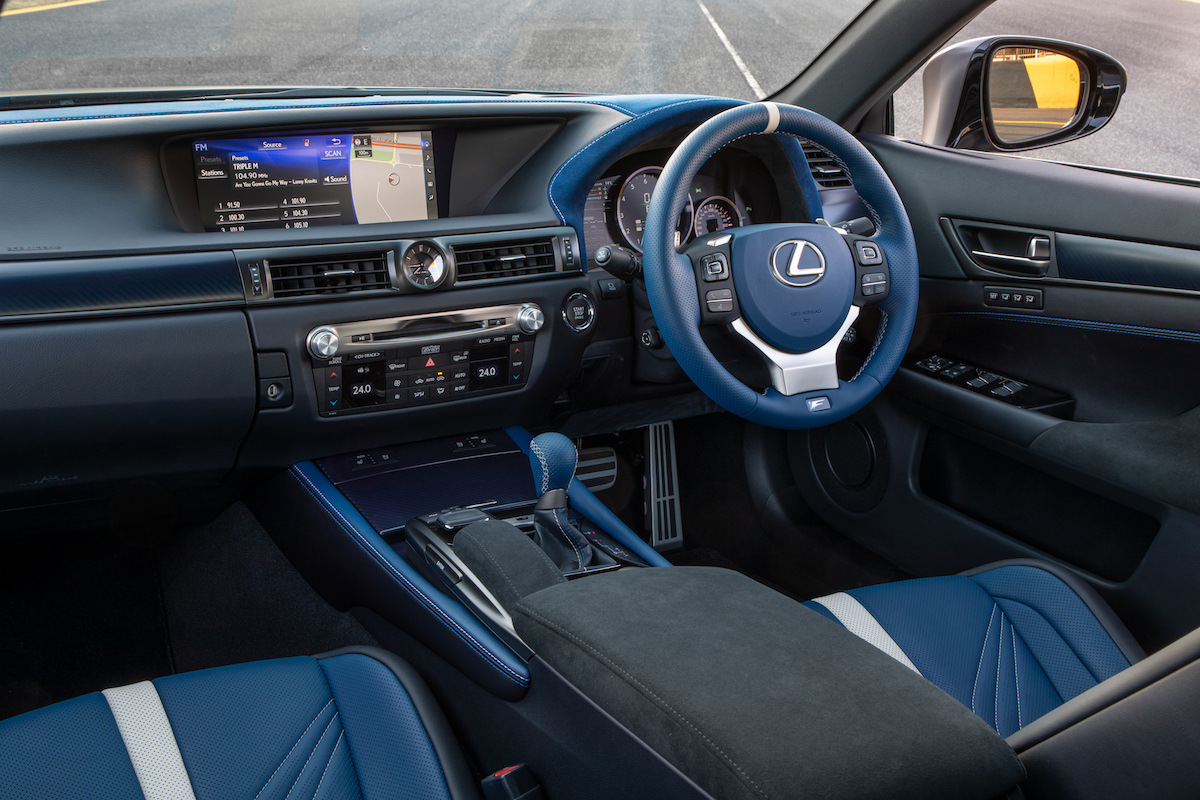 “This is a sporty car, yes, but it’s also very much a luxury sedan, and its default position seems to be quiet, plush progress, which is slightly at odds with how very mean and punchy it looks.” Stephen Corby

A very useful 530Nm of torque means you hardly need to prod the throttle to cruise your way around the city, the ride quality is soft rather than sporty and the whole thing feels relaxing, even cosseting, and perhaps more comfortable than a heavily cushioned Iron Throne.

Driven in its default Normal mode, you sometimes forget that you’re driving an angry V8 with 351kW, but then you switch to Sport or Sport+ modes, and realise your full potential. Give the GS F its head and it will batter its way to 100km/h in just 4.6 seconds. 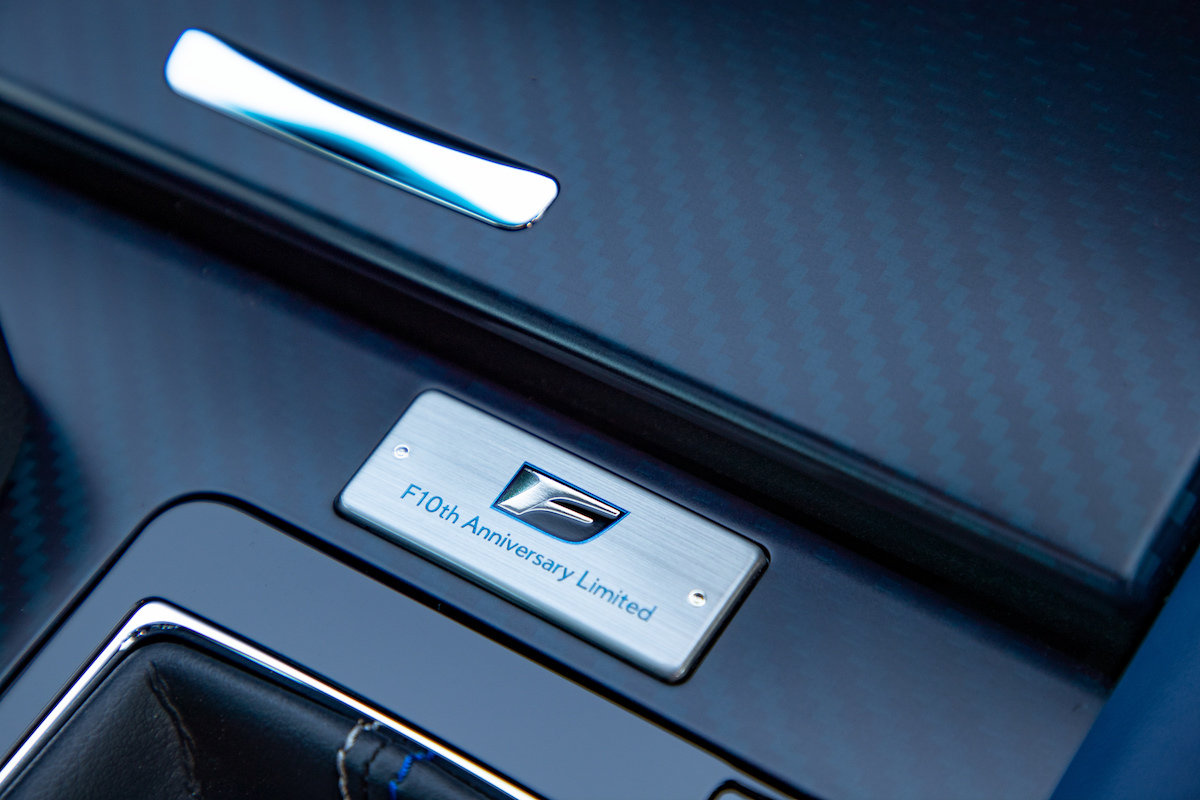 The sportier modes also seem to awaken the sleepy exhaust and you realise just how fantastic this Lexus can sound at full noise, an ability that it hints at every time you start it up, just to remind you that the demon within is there if you want it.

The GS F also has truly great brakes, combining feel and stopping power, which encourage you to dive deep into corners, while the car’s performance dampers allow it to carve its way through the bends with great poise.

A Torque Vectoring Differential also means you can get all that power down via your rear wheels and still be pointing where you want to go, rather than sliding hopelessly into oversteer.

Essentially you are getting the best of both worlds here, because the GS F is as impressively comfortable and spacious inside as it is sharp and angry outside. It can also do relaxing cruising and commuting, without the overly firm ride you get on some performance cars and, when called upon, it can put a smile on your face and a ringing in your ears as well.

What makes it like the modern Mike Tyson is that it’s actually a lot scarier-looking than it is. Yes, it can still rip your head off (or at least one of your ears) if riled, but most of the time it’s actually a smiling, sociable thug with an air of money about it. 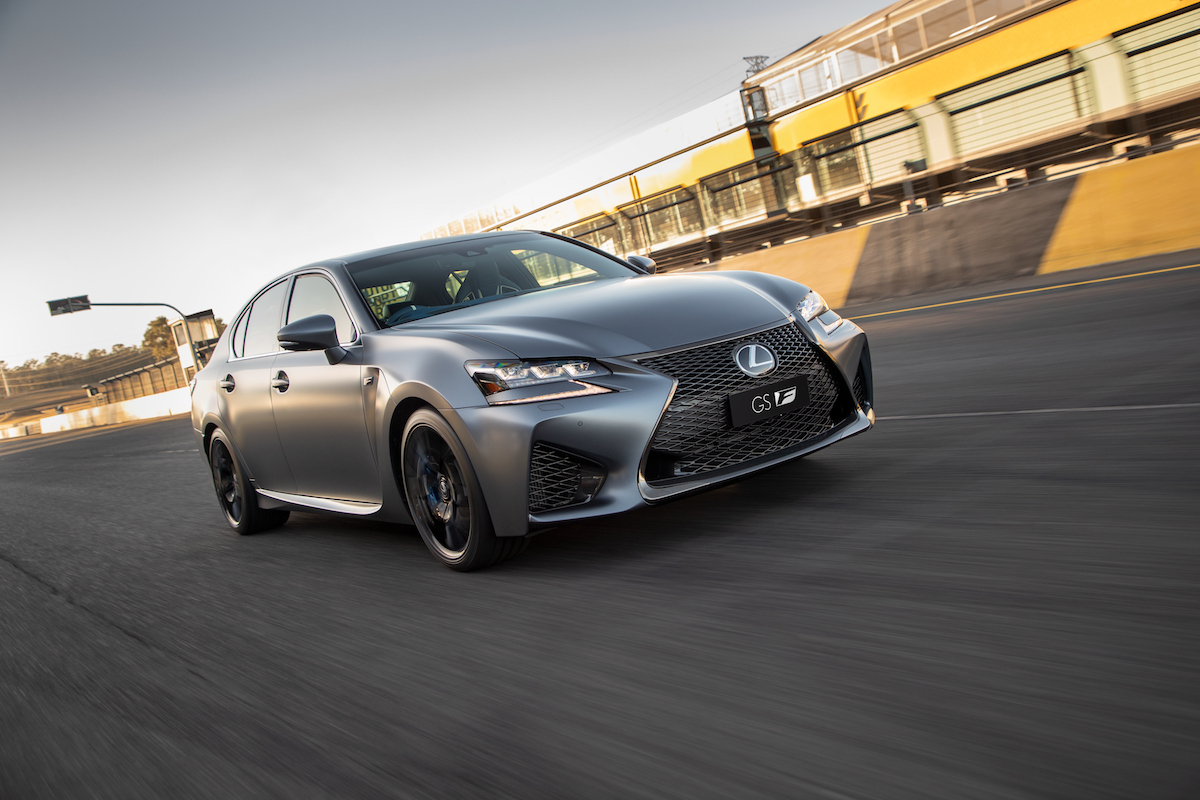 Speaking of which, this limited-edition sporty sedan can be yours for A$155,490, with almost no expensive options boxes to tick.

The Japanese really do do things differently.

Read Stephen Corby’s review of the brand-new Rolls-Royce Cullinan, and find out if the escape promo video is better than the Audi A8 itself.