The 2021 Mercedes-Benz S-Class is the brand's centerpiece and it is the most luxurious and advanced model released by the German marque. Every new generation of the Mercedes-Benz S-Class, the world’s biggest selling luxury car, takes motoring pleasure beyond anything you can possibly imagine.

Anyone who knows anything about the Mercedes Benz S-Class, knows the new version launches a number of innovations for both the Mercedes-Benz brand and the automotive industry in general. It is the brand’s centrepiece.

The aim of the developers was to exceed the high level of suspension and ride comfort of the preceding series, while achieving a very high level of vehicle dynamics

“The S-Class stands for the fascination of the brand and defines the luxury automotive segment. The new luxury saloon can be experienced with four senses – sight, touch, hearing and smell. At the same time, it offers a multitude of innovations, for example in terms of support, protection and interaction,” Mercedes-Benz said in a statement.

“Occupants experience a sense of ease and well-being inside the new luxury saloon. More than any other vehicle, it stands for individualisation and comfort, design and quality, technology and safety. In other words, individual mobility at the very highest level and the confidence that the S-Class cares for its driver and passengers,” said Mercedes-Benz while also announcing Formula One star Lewis Hamilton and multi award-winning singer Alicia Keys as its ambassadors.

Mercedes-Benz has axed the S-Class coupe and cabriolet, deciding its seventh-generation flagship will be exclusively released as a four-door sedan. However an even more luxurious Maybach version will be launched before the end of the year in addition to a large AMG sedan. 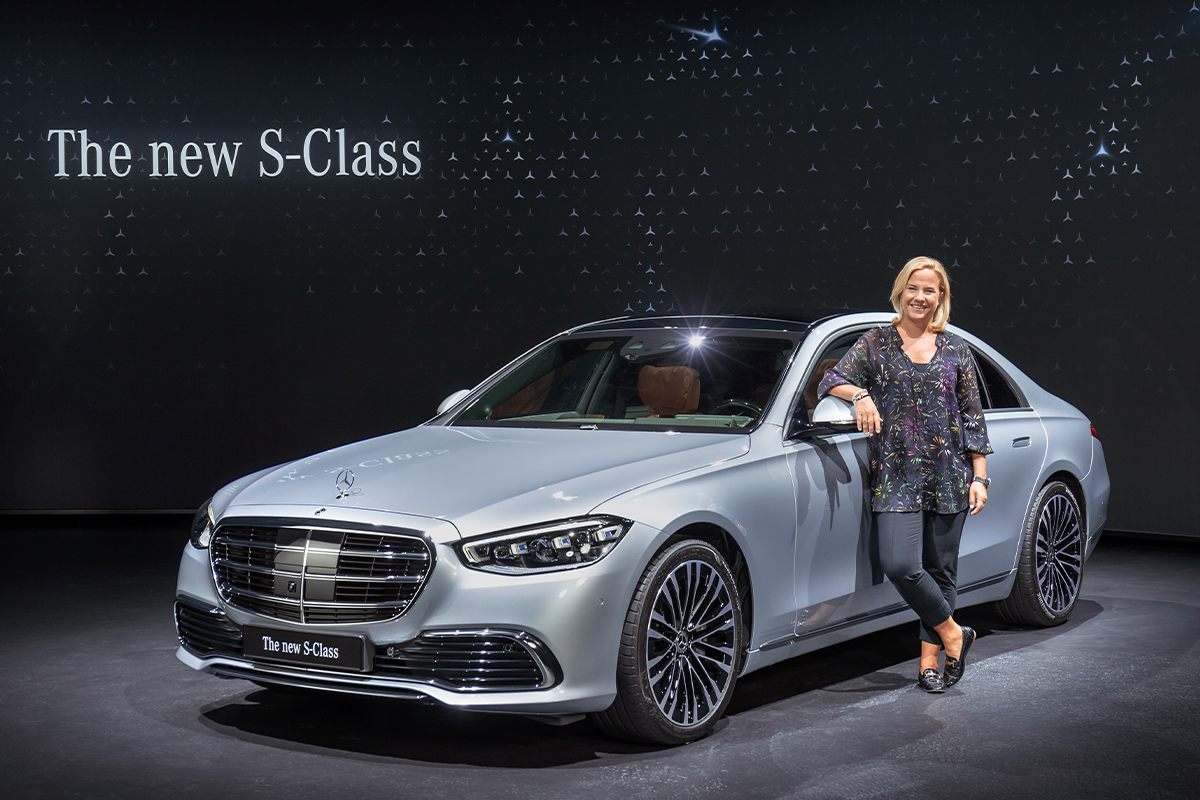 Key features of the 2021 Mercedes-Benz S-Class, the most luxurious and advanced car ever made Photo: Daimler AG 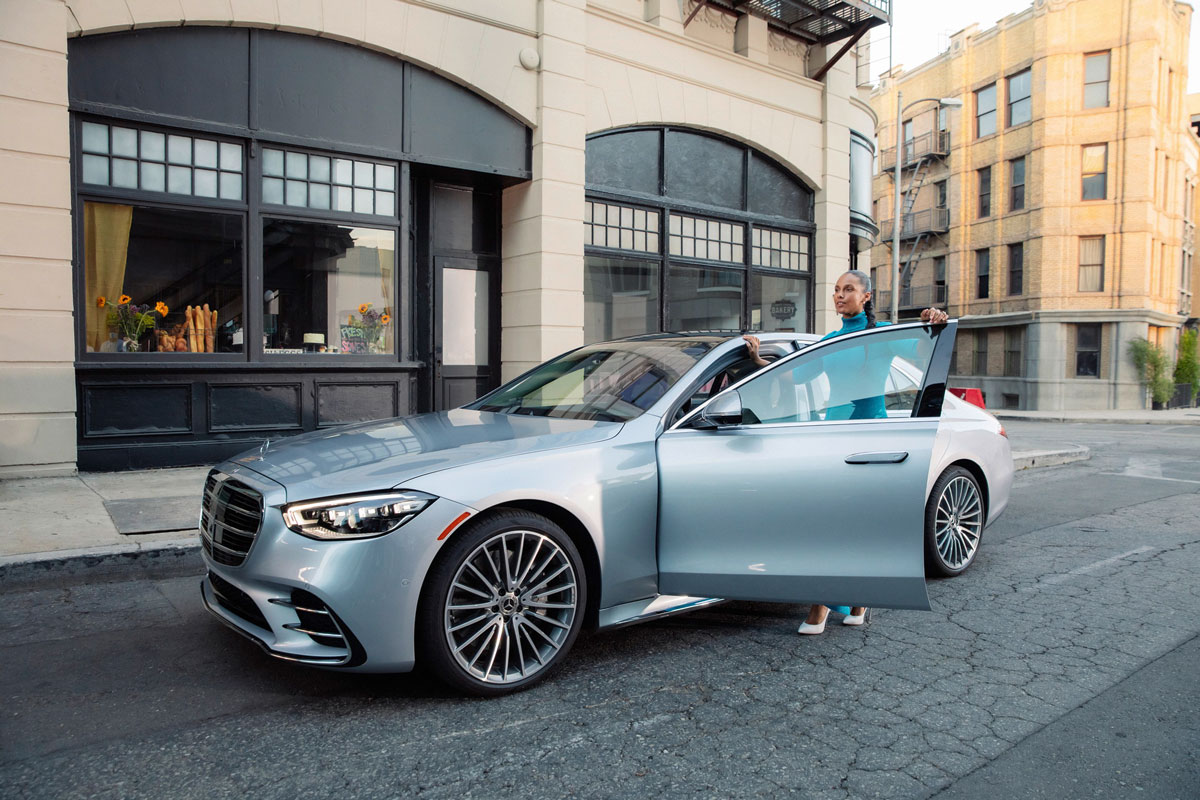 Everything about the S-Class is a class above the luxury on offer in any vehicle. That can be hard to imagine but it is true. Mercedes-Benz will want every owner to create a profile to automatically load preferences for everything from audio levels and frequent navigation destinations to climate settings and seat position. The profile can be activated by a fingerprint swipe, facial recognition, voice recognition, or a PIN, and up to seven profiles can be stored, with the car’s owner reserving the right to restrict how much access other profiles have to vehicle settings.

The new S-Class has rear-axle steering (which reduces the S-Class’ turning-circle by 1.9 metres) and an ‘E Active Body Control’ that claims to be the “world’s most intelligent suspension” system by counteracting pitch and roll, scanning the bitumen ahead for bumps and dips, leaning into bends and adjusting damping at each corner 1,000 times a second.

At the front axle the springs and dampers are housed in one suspension strut. This level control is part of AIRMATIC. It keeps the ground clearance constant irrespective of the vehicle load, but also makes changes. By way of example, Mercedes-Benz states, in COMFORT mode the vehicle body is lowered by 10mm at high speeds above 120 km/h and another 10mm at over 160 km/h to reduce aerodynamic drag and increase driving stability. In SPORT driving mode the body is always 10mm lower, and in SPORT+ 17mm lower. At up to 60 km/h, the body can be raised by 30mm at the touch of a button. 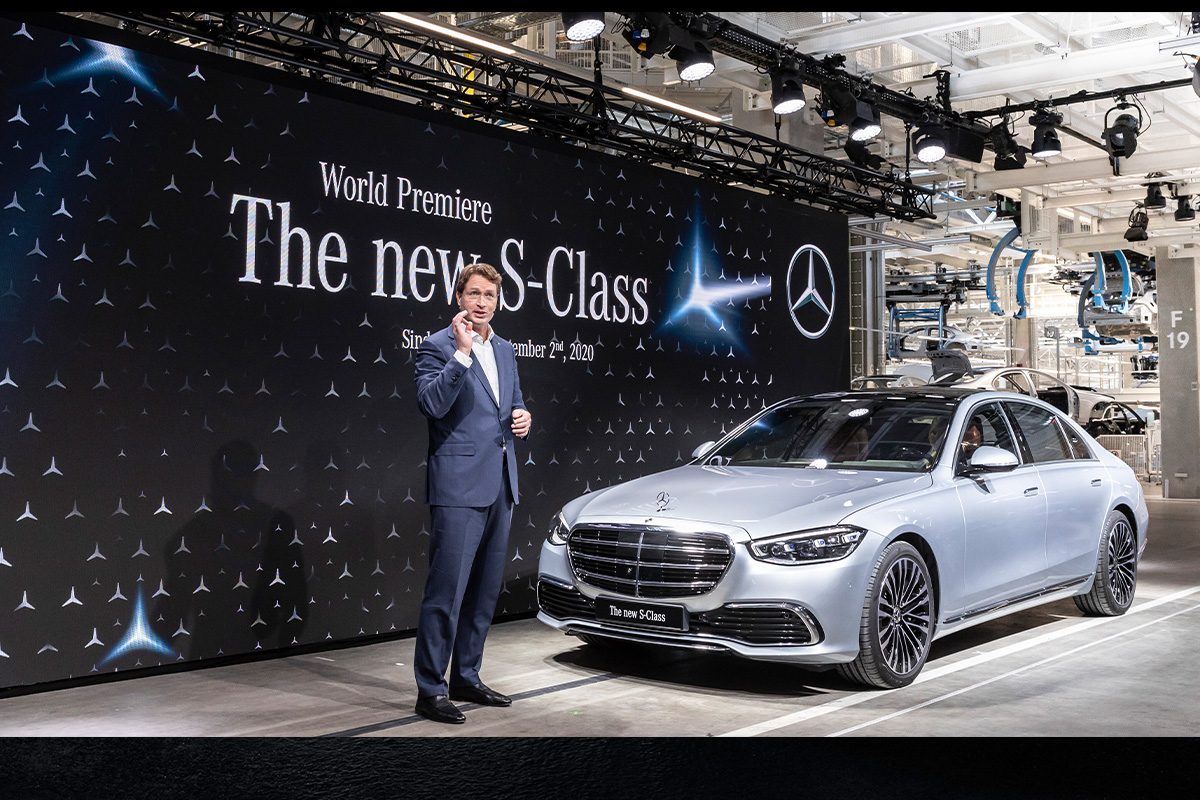 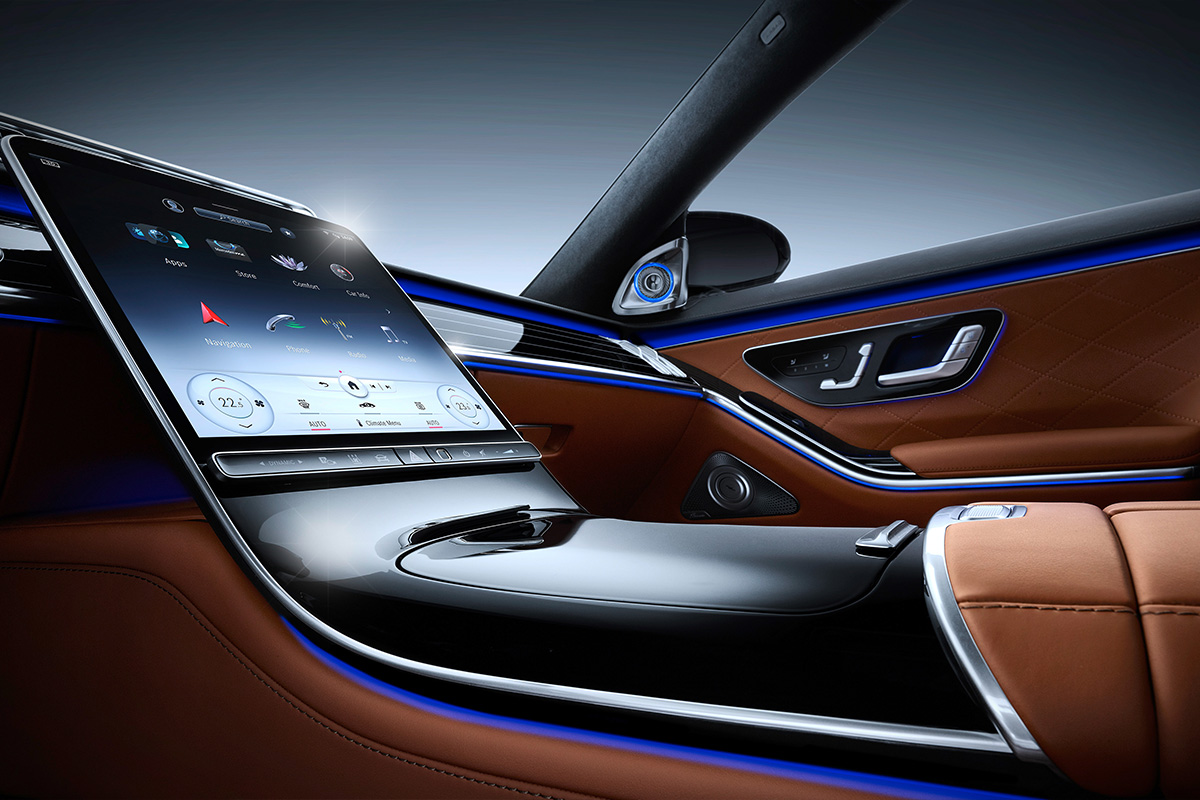 On the safety front, it’s the first production vehicle to feature forward-facing airbags for the outboard rear-seat passengers. In the event of an accident, two 70-litre bags – one in the back of each front seat – fill with ambient air to minimise the forces acting on rear occupants’ heads and necks and complement the existing inflatable seat belts.

On the dashboard, the new S-Class debuts the second-generation of Mercedes-Benz’s MBUX infotainment system, succeeding the first-generation system launched with the 2018 A-Class hatchback. Dominating the dashboard is a large, portrait infotainment touchscreen available in 11.9-inch or 12.8-inch sizes – the latter adding OLED technology and haptic feedback – with support for Spotify, Tidal, Amazon Music and TuneIn streaming services, and over-the-air updates. The number of buttons and knobs are reduced to the absolute minimum.

Audio, navigation, climate control, seat massages, vehicle settings, and more are accessed through the screen. There is 50% more computing power than the current model. The “Hey Mercedes” voice assistant has been upgraded for the brand’s flagship model, now offering support for up to 27 languages and the ability for it to be activated from the rear seats.

Mounted in front of the driver is a 12.3-inch digital instrument cluster which, if the right option box is ticked, uses eye-tracking via a pair of cameras to provide a three-dimensional effect when displaying any of the screen’s four standard modes (Discreet, Sporty, Exclusive and Classic).

S-Class buyers can choose between two head-up display options, the larger of which projects an image onto the windscreen equivalent to the size of a 77-inch display, and can display navigation directions and adaptive cruise control information in augmented reality.

Then there is DRIVE PILOT. Mercedes-Benz expects from the second half of 2021, the S-Class will be able to drive in conditionally automated mode at up to 60 km/h with the new DRIVE PILOT where traffic density is high or in tailbacks on suitable motorway sections. The technology for this includes fail-safe steering which executes the relevant actuation and steering commands of the intelligent track guidance system with the greatest precision. Embedded in a twin-channel architecture, this steering relies on a multiple back-up energy supply via independent bus-systems with the vehicle components involved. The front and rear axle have twice the number of rpm sensors.