As a major global polluter, the fashion industry has long been in the firing line of environmental advocates. Transforming the way the world shops for garments, Daniel Avakian is tackling the issue with revolutionary technology.

Launched at Afterpay Australian Fashion Week – the first fashion week with a live audience since Milan Fashion Week in 2020 – the designer’s innovative concept highlighted the potential of real-time fashion.

Suspended on a large LED screen, a hyper-real avatar wearing a DA CUSTOM by Daniel Avakian gown rotated 360 degrees on a platform before a model walked out from behind the screen wearing the very same dress, showcasing a fresh concept for virtual fittings and real-time fashion.

“DA is the first adopter of this platform of workflow and this technology. It has been a couple of years in the making,” Avakian tells The CEO Magazine.

Amazon, Prada, Farfetch and Piaget are among some of the brands trying their hand at virtual fittings. Even Dior collaborated with Snapchat in 2020 to allow customers to virtually try on the French maison’s B27 sneakers.

While similar to these offerings from other companies, the DA CUSTOM concept will make waves in a new way.

Although the hyper-real avatar process was sped up in the interest of the 30-minute fashion show, it will still be fast by fashion’s standards, taking about a week from fitting to delivery.

And the process is quite simple; it allows consumers to see a photo-realistic simulation of a product on the DA CUSTOM website in 3D form. They can then do a body scan at home to ensure the product fits before purchasing – just as if they are in a physical store.

Through a widget that uses a digital measuring tape, customers can do the body scan themselves and their measurements are sent to DA through the cloud so designers can impose the customisation. From there, Avakian’s team of designers handcraft the made-to-order product, which will land in the consumer’s hands within a week.

“We’re able to do it in real time – we’re trailblazing here,” he explains. “We’re calling it real-time fashion.

“It’s not ready-to-wear or fast fashion; it’s faster than fast fashion without the collateral damage.”

While sizes are customisable, the Founder says it shouldn’t be mistaken with consumers designing their own clothes. “We’re not enabling a customer to design their own pearl zippers on a jacket,” Avakian explains. “What they’re doing is buying the intellectual property of the style. So, let’s say, we have a beautiful boyfriend blazer in red and the customer wants to buy it in blue.

“We’re enabling the customer to do a little modification whilst they’re purchasing through the body scanning app, so maybe they’re shortening the sleeves or changing the jacket length to suit their body.”

Avakian believes these slight personalisations allows designers to capture trends instead of leaving them to compete with technology-fuelled trend changes.

“It all stems from the old-fashioned business model where a designer would design a collection, for example Spring/Summer,” he shares. “It gets sold to retailers via wholesale and then they produce all these sample sets. So, if they’re producing globally, they’d have to produce for each of the sales agents.

“Then three months later, they deliver the collection. By this time, brands are kind of on their knees spending a fortune in marketing and are trying to pick a trend three months out of market.

Stitching the future of fashion Inspired by Stanley Kubrick’s 2001: A Space Odyssey, Avakian says the essence of the 1968 film is laced through his fashion concept.

“The plot is all about human evolution, so I thought it tied in really well [as it’s] obviously a new retail shopping experience that we’re integrating with the new technology,” he says. “That film has all the oats of what I am as a designer, where you have the neoclassical tradition versus the future.

“We’re not sci-fi; we’re more about the future, so it was really appropriate to use as our concept. It really stems from there.”

Blending traditional seamstress craftsmanship with groundbreaking artificial intelligence makes DA CUSTOM an early pioneer. However, there have been other companies that have dabbled with similar technology.

Online fashion retailer Zozo Inc launched its Zozosuit in 2018, but it was discontinued in 2019 after failing to drive sales or accurately customise products to fit its consumers.

By bringing real-time fashion into the multibillion-dollar industry, Avakian’s label blends the two worlds to create a fruitful future.

“You can have this experience where you can customise the fit remotely, pick your suit, and get it made with an old world meets new futuristic customer experience,” he says.

As fashion is one of the leading culprits of pollution and landfill, the influential tech will also help combat textile waste.

“We can limit our carbon footprint by not having to produce stock of products and have samples,” he explains. “It’s such a beautiful industry, I love it. But it really needed an overhaul. The business model has aged, and the technology hasn’t caught up. 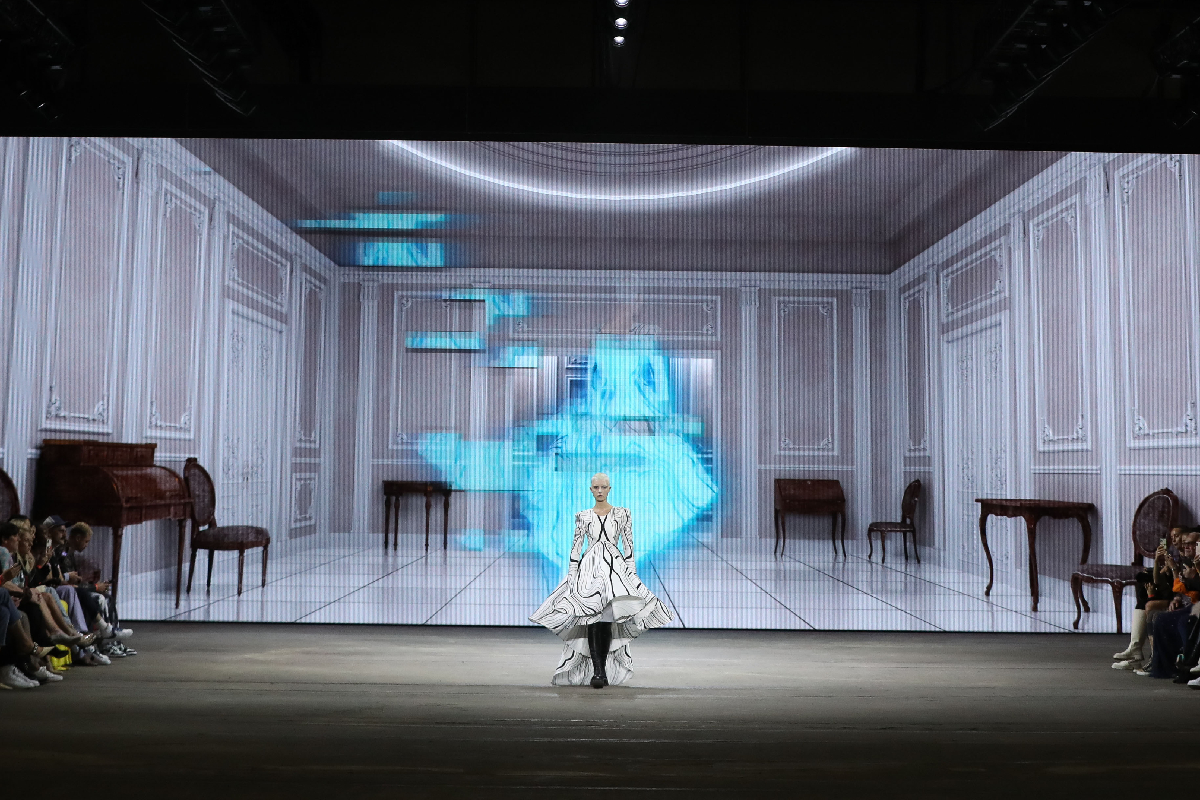 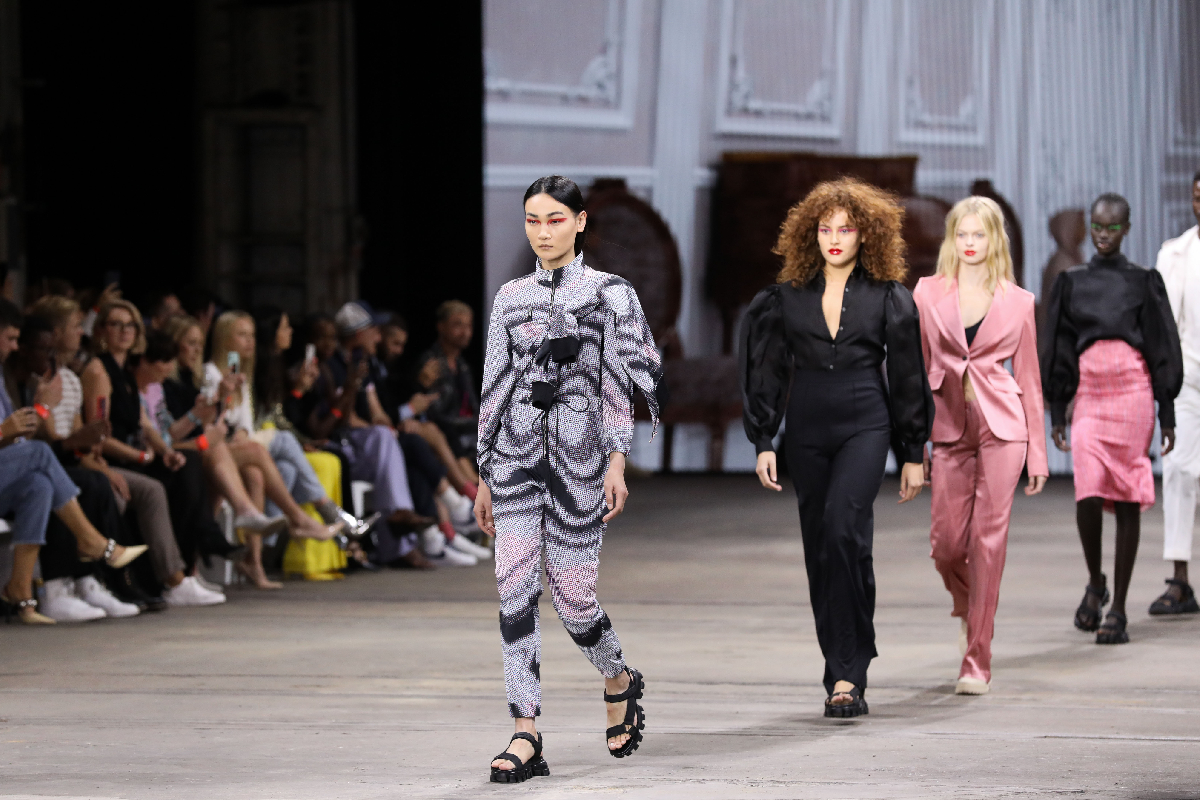 “The real power in what we’re doing is the supply chain and the know-how to create that customer experience that is capturing the trend and delivering on-time product to our customer.

“If the style isn’t commercially realised, instead of having stock, we can just press delete and go onto the next style.”

By having consumers customise the size and length of items, it reduces the number of textiles ending up in landfill because people will be happy with the products they’ve bought. The added benefit is that there will be less dead stock sitting in warehouses.

Set to launch DA CUSTOM to the community later this year, Avakian believes it will inspire other brands to embrace the technology.

“To be the first in the world to launch a hyper-real avatar to open an international fashion show is amazing,” he says. “The fashion industry is like a glass room – everyone looks in from the outside and there’s a handful of us on the inside.

“DA is pioneering and integrating all these technologies. We want to have a multi-brand marketplace – enabling not just other brands but young designers who have starry eyes and social media influencers.”

The concept also offers emerging designers their big break into the ruthless industry.

“I’m a dinosaur when it comes to design – the younger generation are a lot more tech savvy because of how they’ve trained at fashion institutes,” Avakian says. “A lot of young creatives finish fashion school and they have starry eyes and want to start their own brands, but they don’t always have the financial backing or the know-how to do it.

“Wouldn’t it be amazing if we see all these young creatives that we may not have ever known come out to be able to create their beautiful designs. That means a lot to me.

“Historically, a designer always keeps their secrets until the day they die. They never release that. This is about giving to the younger generation, as well as limiting carbon footprint.”

From truck driver to fashion elite 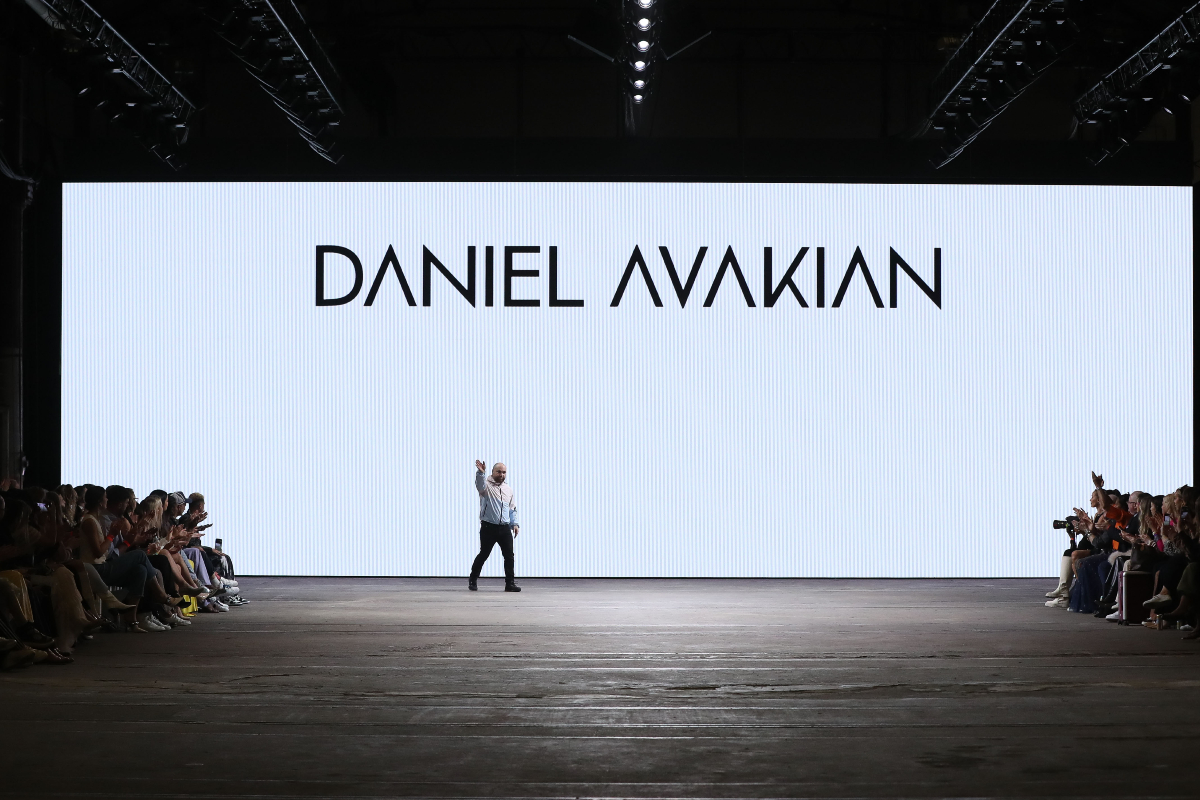 He may now be a self-proclaimed dinosaur in the design world, but Avakian wasn’t always a creator.

As a fresh faced 18-year-old, Avakian was a tow-truck driver. It wasn’t until his girlfriend at the time encouraged him to pursue fashion – an avenue where he soared.

After topping his class at the Whitehouse Institute of Design in Sydney, Australia, Avakian earned a scholarship to obtain his master’s in Florence, Italy, where he topped the class yet again.

“I come from a single mother who raised me and did her best. So I always like to make women look strong. I pick products that are sexy and accentuate the woman’s body.” In addition to empowering women with strong designs, most recognisably with his bold power suits donned by the likes of Rita Ora, Jennifer Hawkins and Dami Im, Avakian strives for inclusivity.

“That was the goal of myself and David Bonney,” the designer reflects. “Each piece was designed for an individual person and it goes back to the concept of real-time fashion, where you customise the style.

“These days, with social media and people’s yearning to express themselves, that’s what we were trying to capture.”

Starting his tailored label in 2006, the designer endured several years of unavoidable corporate challenges before he came to fully realise the purpose of his brand.

“In my heart, when I started my business, there was always this ode to the future, not sci-fi but the future,” he shares. “I didn’t know what that was until I basically ran through the bush with a broken knife and a pocket torch, got speared a few times along the way, until I learned what the pitfalls were in business.

“My business partner and I explored the pitfalls of what we both experienced and we came up with a concept we believe is the future.

“We’ll be able to produce product that is relevant in real time. Watch this space.”