The America’s Cup is one of the world’s most dangerous boat races requiring sheer talent, experience and advanced technology for a shot at glory. This is Omega’s answer to the upcoming race of billionaires. 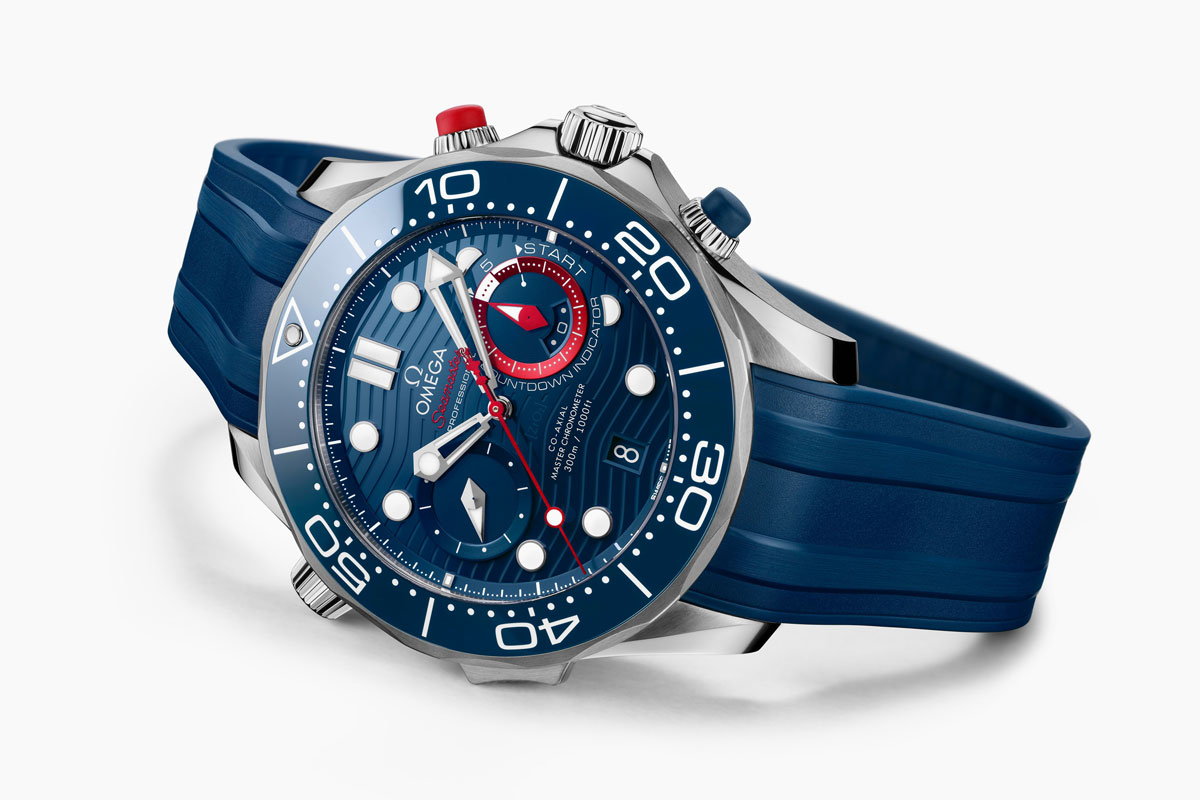 The world’s richest boat race demands the world’s most fearless sailing crews and cutting-edge vessels to match. While those are the fundamental components, teams also have to fight against the fury of Mother Nature and the clock to cross the finish line on top.

The visually-striking timepiece is designed to deliver extraordinary precision under the pressures of racing at sea. This task is accomplished with new appointments such as the Chrono Lock system, Quick Change strap and water grip pushers to make operation at sea as seamless as possible.

Designed for the ocean 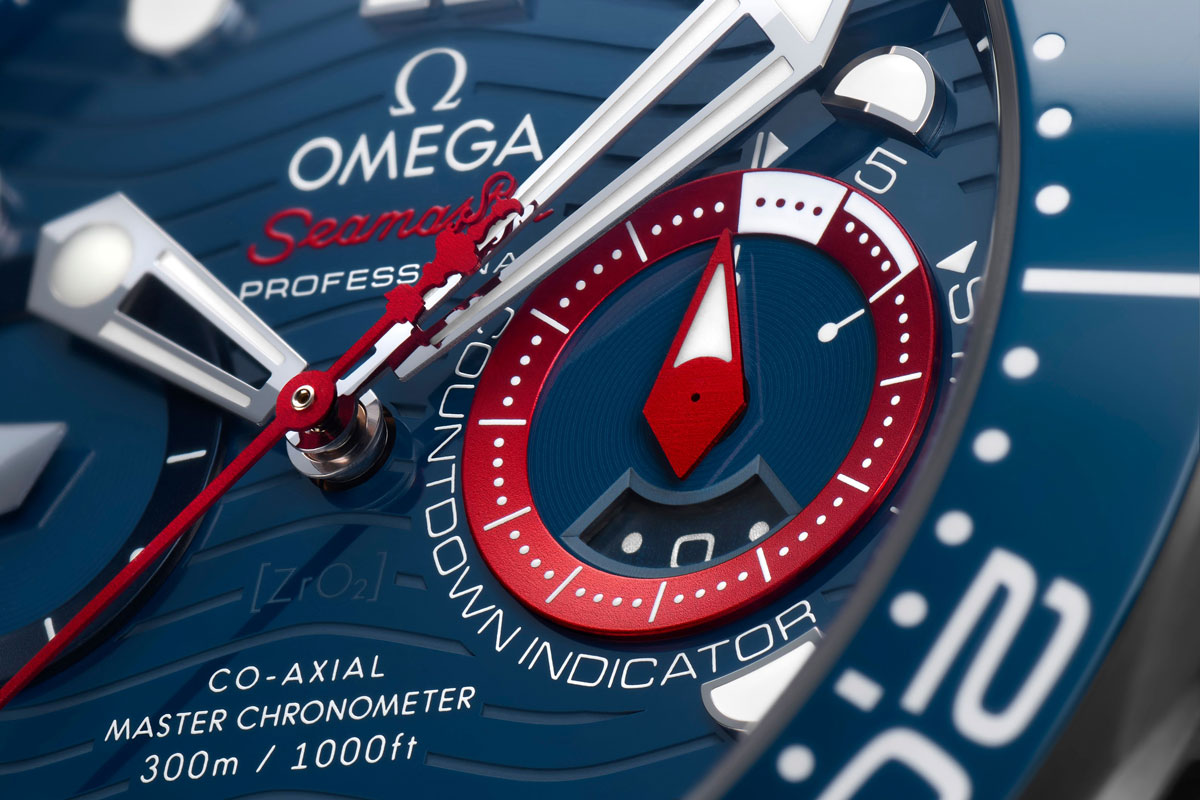 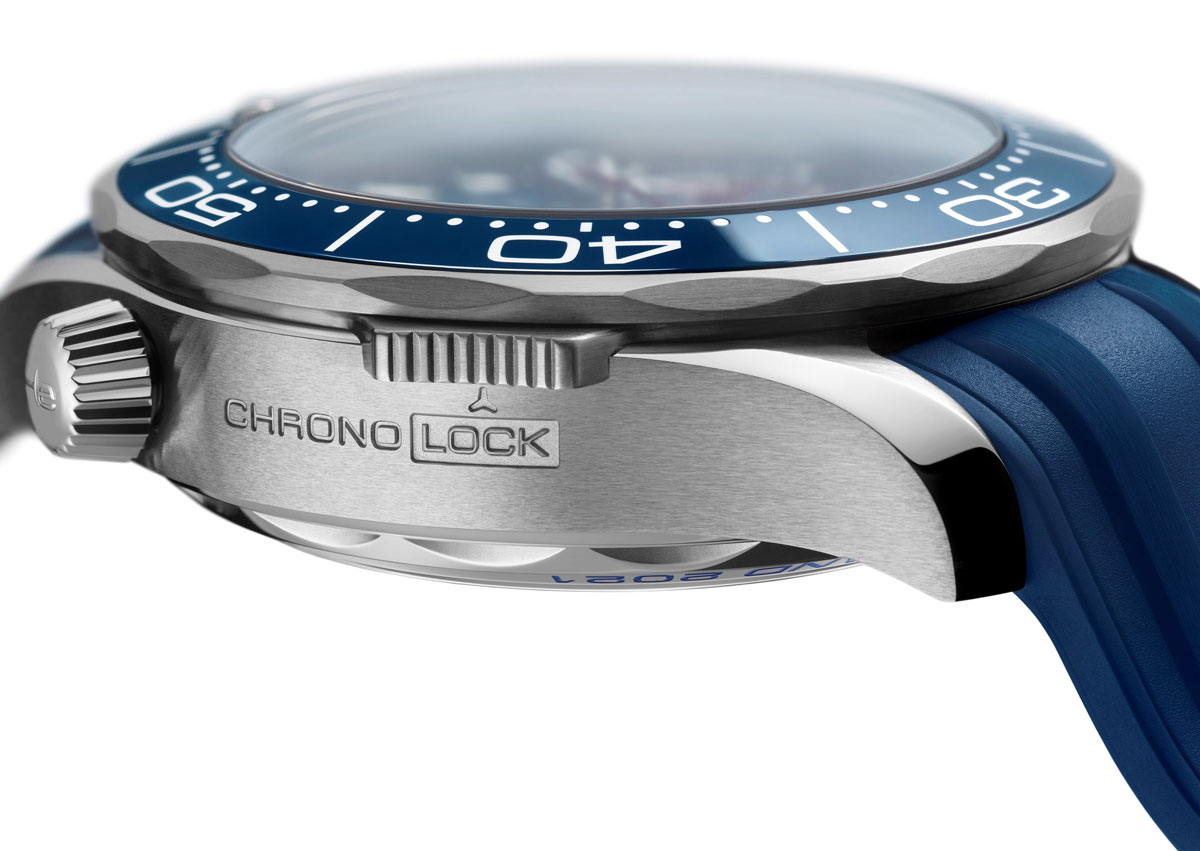 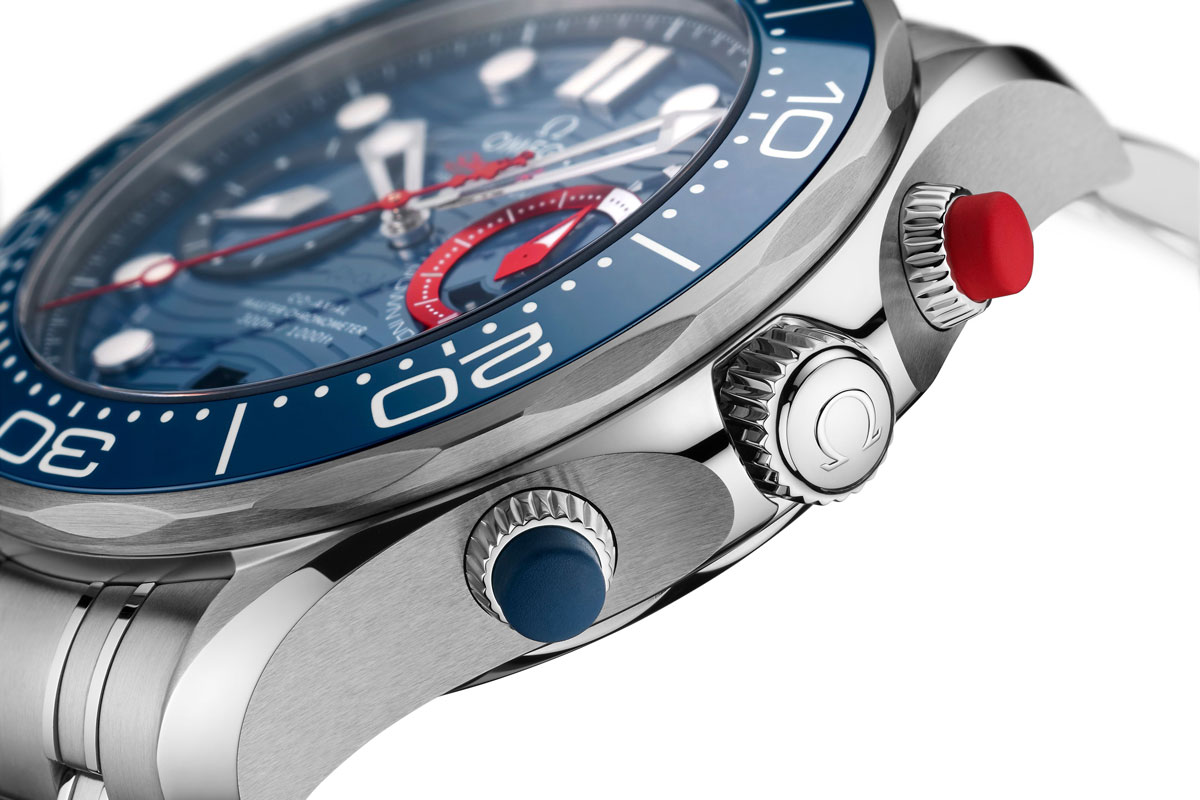 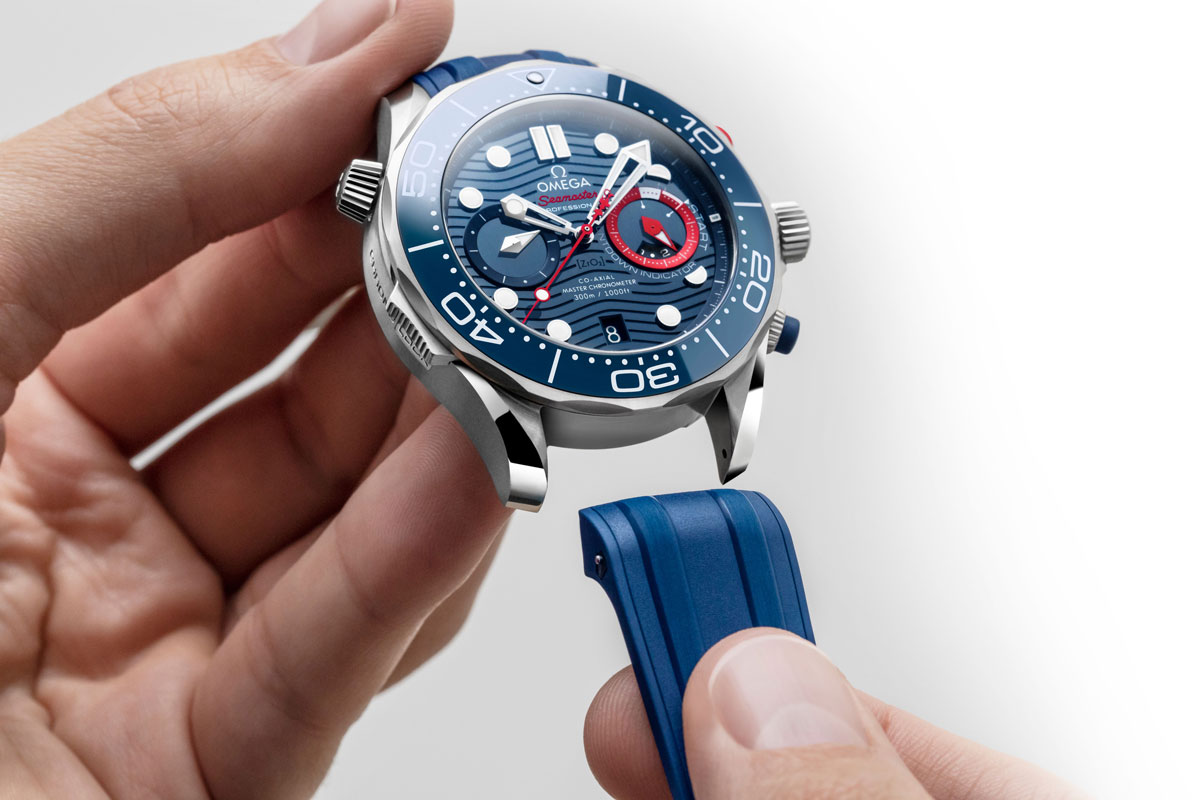 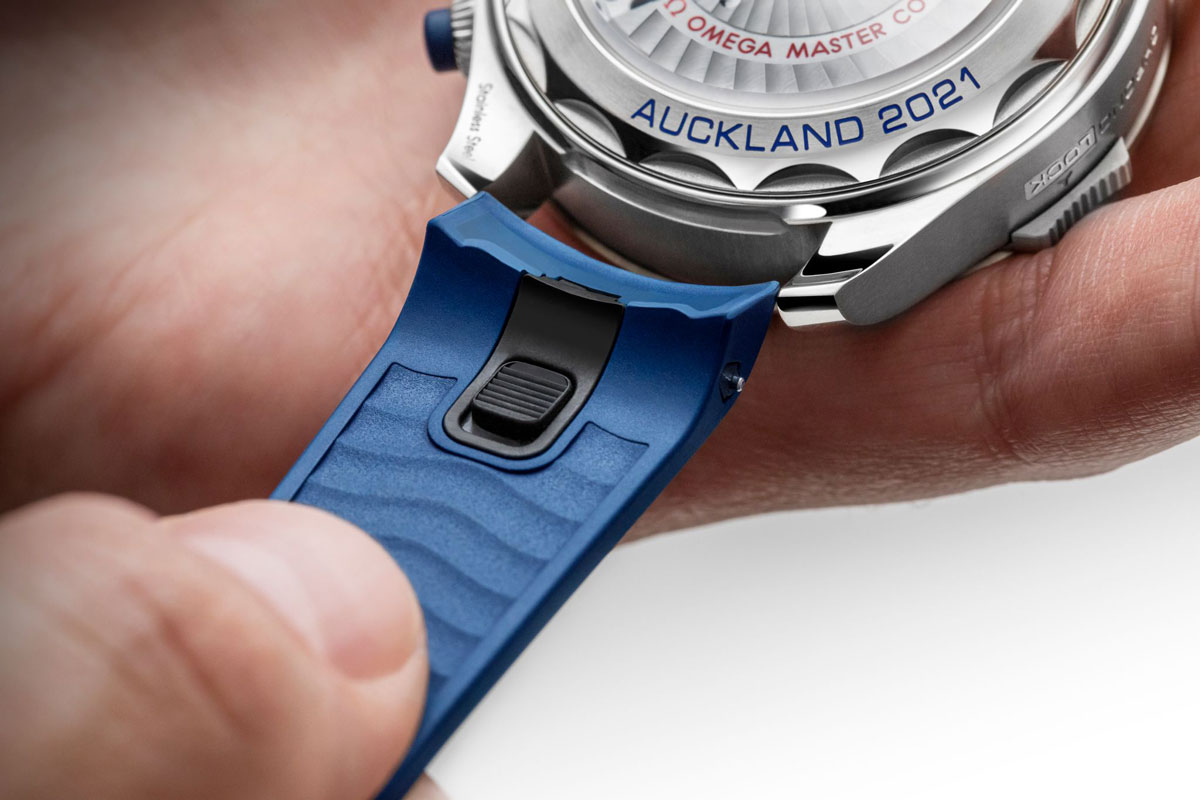 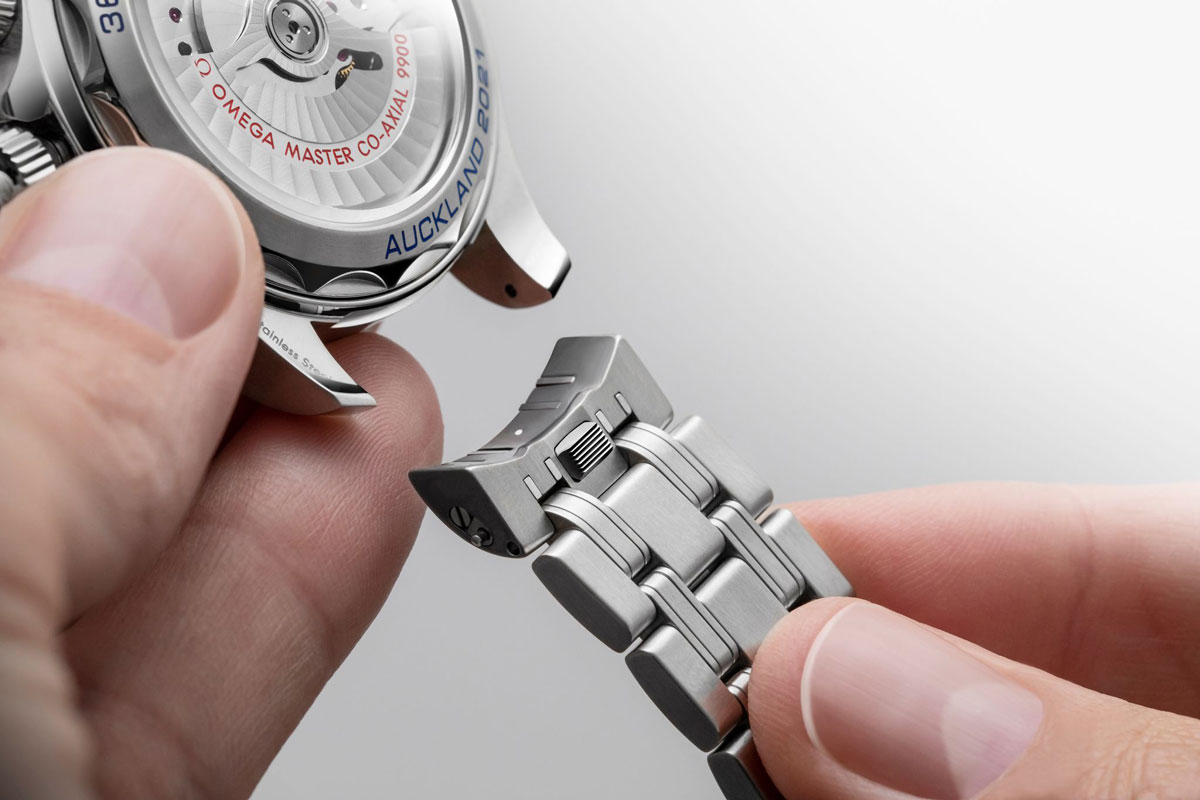 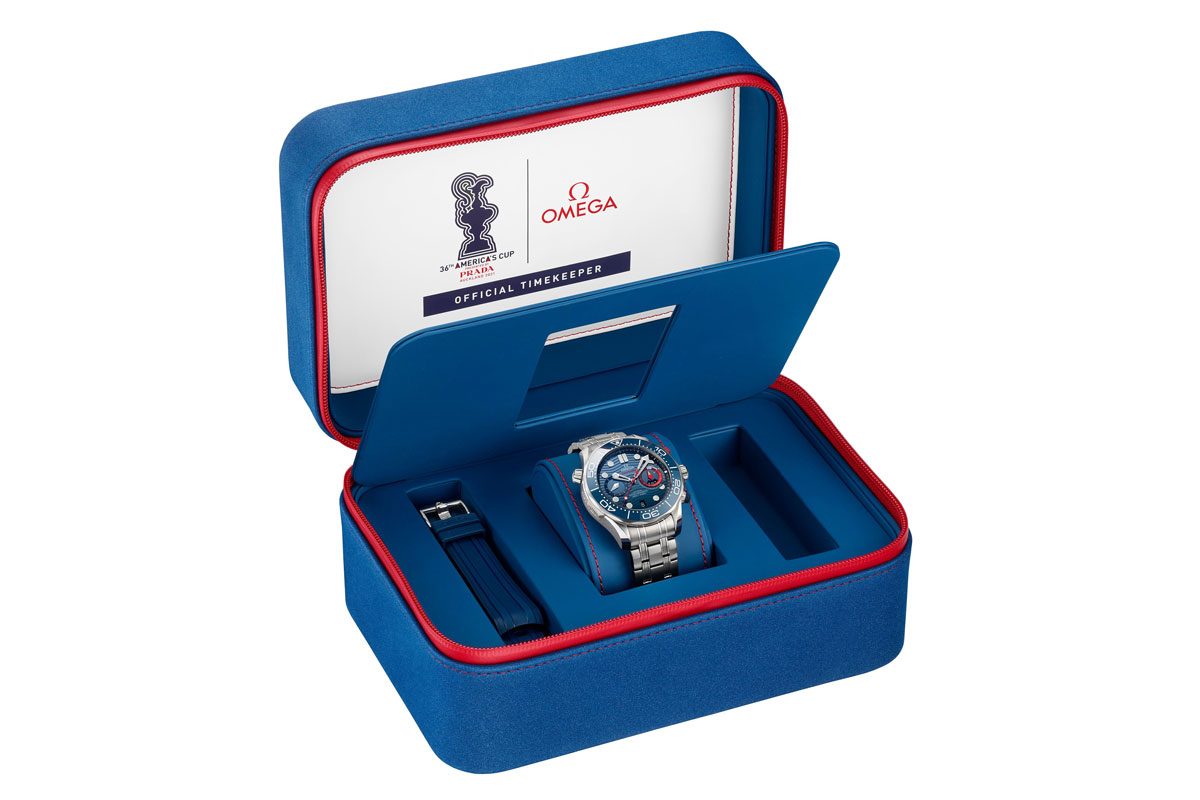 The latest rendition of the formidable Seamaster model line is crafted from stainless steel and set in a 44mm case complete with a blue ceramic dial and bezel ring featuring a white enamel diving scale. The inclusion of the aforementioned soft-touch rubber pushers enables wearers to have a better handle of the watch’s features during high swells. While ergonomics is the crucial requisite here, Omega have added red and blue finishing on the pushers for a more stylish appeal.

On the blue dial, there is a laser-engraved wave pattern finish, which is beautifully contrasted against a ‘regatta countdown indicator ring’ in red anodised aluminium. This subdial itself carries an additional hour disc and a red anodised aluminium minute counter. On the opposite side, there’s a rhodium-plated small seconds hand inspired by the shape of a boat hull. The central seconds chronograph hand is also finished in red anodised aluminium and comes with the America’s Cup silhouette on the counterweight. A date window at 6 o’clock and sizeable hour markers ensures legibility is paramount at all times. As the name suggests, the timepiece comes with a 300-metre water-resistance rating.
The addition of Omega’s proprietary Chrono Lock system ensures that the watch’s chronograph functions are immediately accessible whenever they’re needed in a split second.
Additional design aesthetic elements include the ‘36th America’s Cup’ and ‘Auckland 2021’ insignia engraved into the caseback, which also shows off Omega’s Co-Axial Master Chronometer Calibre 9900.

Finally, the Omega Seamaster Diver 300M America’s Cup Chronograph comes with a metal bracelet and rubber strap. Its Quick Change system means wearers can seamlessly alternate between the bracelet and strap at the push of a button without the use of tools.

The watch is presented in an exclusive box, which replicates the colours of the America’s Cup.

Read next: Omega unveils its most advanced tourbillon timepiece ever