Meet the luxury handbag investor with more than 100 Hermès bags

The results of the first index dedicated to collectable handbags have been released and the wealth report dives into this emerging asset class. We all know that splashing out on designer fashion labels can be expensive. Nonetheless, the idea of paying six figures for used handbags may sound somewhat extreme. Increasingly, though, serious collectors are spending this kind of money at auction for the ultimate handbag ‘must have’ – the exotic Himalaya Birkin, produced by Hermès.

In 2017, Christie’s set the world auction record for the most expensive handbag when it sold a Himalaya Birkin with white gold and diamond hardware. Under the hammer in Hong Kong, it achieved the equivalent of US$386,000. Since then, the secondary market for handbags has continued to grow, with pieces fetching dizzying sums on a regular basis.

Indeed, such is the demand that Christie’s now hosts seven live and online auctions each year, in Asia, the US and the UK. Aficionados can visit entire museums devoted to them – one in South Korea is even bag shaped – and in April, the V&A in London launched a dedicated exhibition, Bags: Inside Out.

“I have some vintage bags that I only bought just a few years ago, but which have already doubled in value.” – Julia Kovaljova

Passionate collectors such as Singapore socialite and entrepreneur Jamie Chua and Paris-based Julia Kovaljova have thousands of social media followers. As with other investments of passion like rare whisky whose value has risen sharply in recent years, handbags are increasingly being seen as an investment class in their own right, as well as highly desirable fashion accessories. 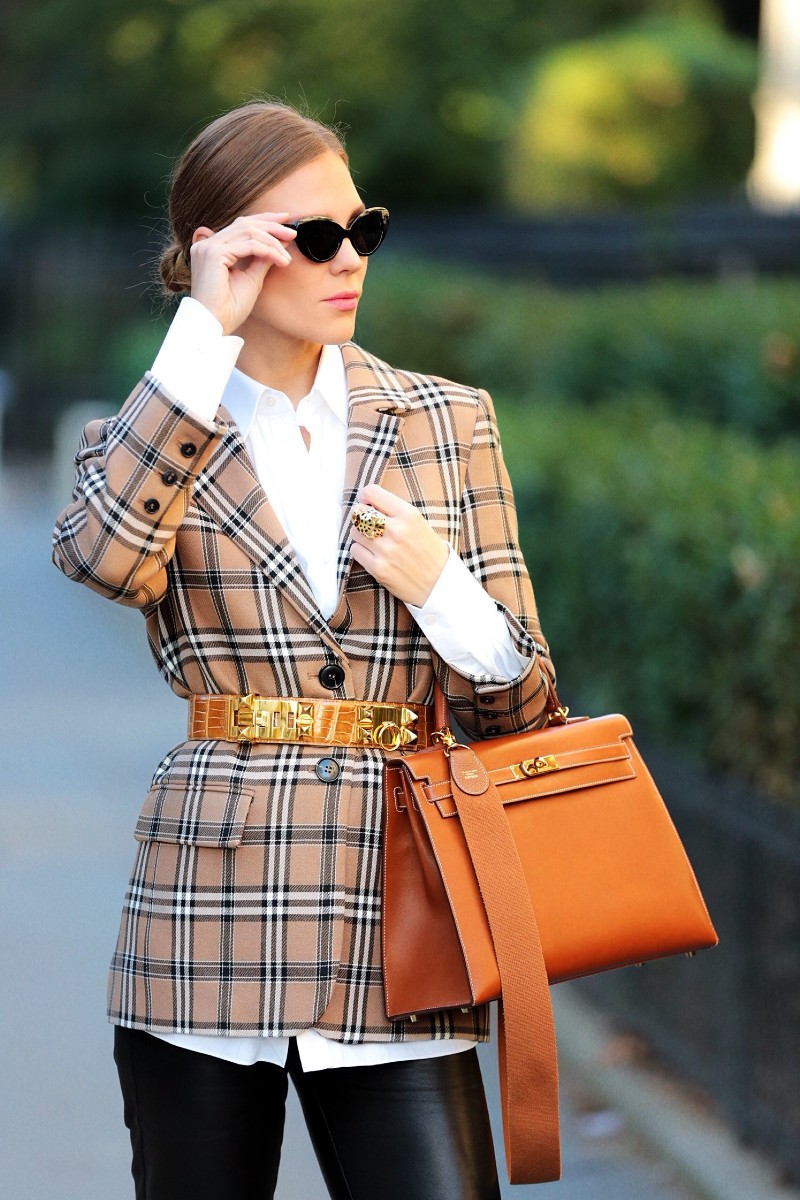 To that end, Art Market Research (AMR), which supplies much of the data for the Knight Frank Luxury Investment Index (KFLII), has launched the first indices tracking the price performance of handbags. For KFLII, the focus is specifically on bags made by Hermès. Over the past 10 years, this index has more than doubled in value, rising by 13% in 2019 alone.

“All of our indices on antiques and collectables use a basket of goods methodology in the same way as the consumer price index,” says AMR’s Sebastian Duthy. “However, it’s only been possible to create an index on handbags now because of the frequency with which many iconic pieces are coming to auction today.”

Although bags made by other luxury brands like Chanel and Louis Vuitton are also highly collectable, it is those made by Hermès that attract the highest prices and are considered the most desirable.

“The history of Hermès and the craftsmanship of the maison are intrinsic to the pieces, which greatly affects demand for, and therefore the value of, its handbags,” explains Rachel Koffsky, Head of Sales for Christie’s Handbag department in London.

“Hermès was established in 1837 as a harness workshop. At the turn of the century new products were introduced as the maison diversified in order to meet the demands of a changing world, but the commitment to craftsmanship remained steadfast.

The first handbags created for ladies were designed in response to the invention of the automobile, and were crafted in the workshop using some of the techniques utilised in the creation of the famous saddles.

“Other brands have come and gone, but in the century since these first handbags were introduced, the materials and techniques used by Hermès have remained consistent – which is why so many have survived. The Birkin, for example, is made by hand in an atelier and can take up to 40 hours using a double-needle saddle stitch that cannot be replicated by a machine. It is the pinnacle of what a handbag can be.

“With other contemporary brands, while bags may still be of high quality, sometimes fashion is the primary function. Hermès bags are made to last. That’s not to say we don’t sell beautiful bags from other makers – but there are far fewer of them.”

The wealth report talks to Paris-based handbag collector Julia Kovaljova to discover what drives her passion for investing in handbags. 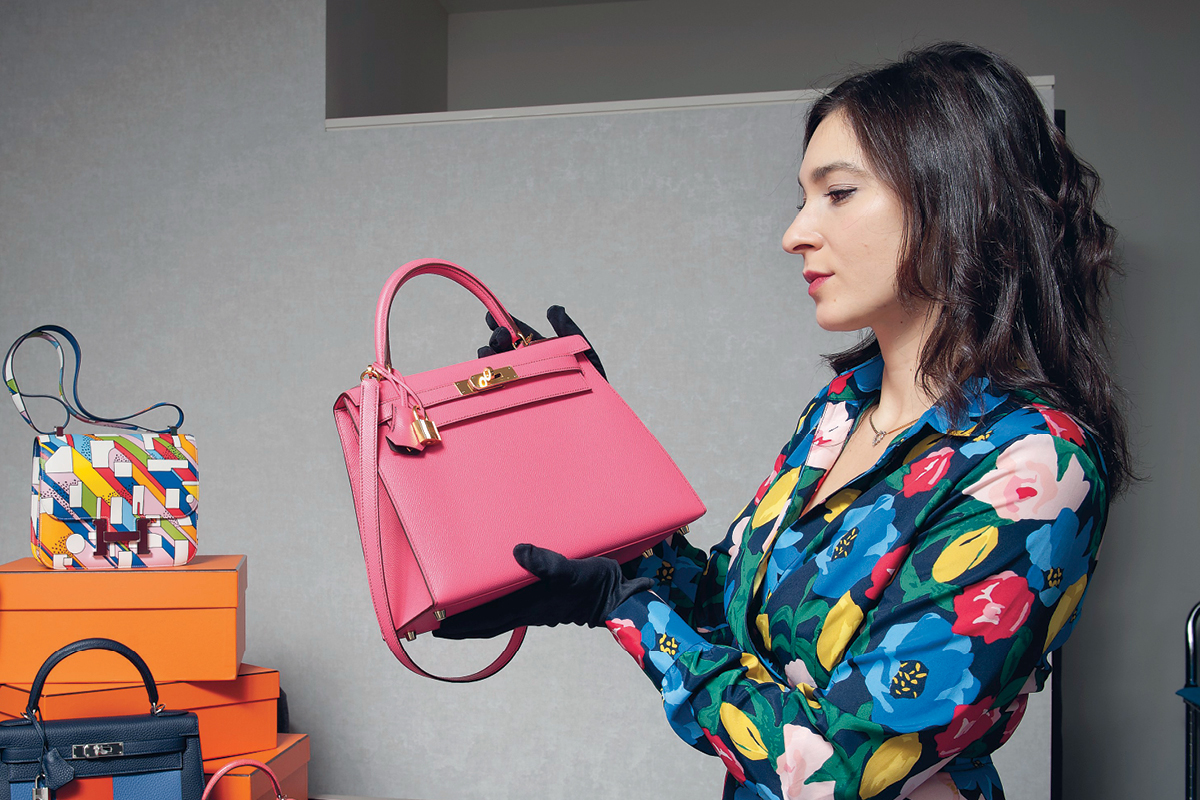 What inspired you to start collecting handbags?
“I was always interested in fashion, and I believe that shoes and accessories are the key to any look. There is no more important accessory than a handbag – not only is it your major styling element, it’s also a daily necessity.”

Do you have a favourite brand?
“Hermès, of course! Its styles transcend fashion. Occasionally I will also buy a rare Chanel limited edition bag or clutch.”

Do you remember your first Hermès bag?
“Yes, it was a 32cm Kelly bag in orange, the brand’s signature colour. I thought it would be appropriate to start with an iconic colour and style, named after HRH Princess Grace of Monaco. Even now, this style remains my favourite.”

Do you have vintage bags in your collection as well as new editions? Which do you prefer, and why?
“As an experienced collector, I am no longer interested in regular Kelly, Birkin and Constance handbags. But every year Hermès reissues and updates these styles, with a new leather, a new combination of materials, an interesting colour or pattern, skin inserts, appliqué or a theme. These are the bags I try to get for my collection. Vintage, though, is my special love because I enjoy the whole process of searching for them. They were issued a long time ago, in limited quantities and will never be produced again, which makes them very valuable. To find such a bag in good condition and for a good price is the biggest joy for a true collector. I have some vintage bags that I only bought just a few years ago, but which have already doubled in value.”

How many bags do you have in your collection now?
“If we are talking about classic styles such as the Kelly, Birkin and Constance, then around 100 pieces.”

Which is the rarest or most valuable? And which is your favourite?
“The rarest are probably the Kelly Picnic and Kelly Teddy, the most valuable right now is a Birkin Himalaya, and my favourite is a vintage Kelly from 1992 in simple black box leather. It was customised to my design by the artisan who used to manufacture these bags for Hermès. This bag is the only one in the whole world – a collector from Asia spent a long time trying to persuade me to sell it, but I could not do it.”

Is there a bag you don’t have that you really want?

“There are lots! Mainly bags from limited editions or vintage pieces such as the Kelly So Black created by Jean Paul Gaultier or the Kelly Dalmatian. To be honest, with my experience and connections, I could have secured these bags on the secondary market by paying a high price, but as a true collector, I would always prefer to make a good deal!”

Is your collection an investment or as something to enjoy?

You are active on social media. Is that an important aspect of your collecting?

“Absolutely. I have around 40,000 followers on Instagram (@julia_kovaljova), many of them interested in or connected with the Hermès brand, and many collectors worldwide. I get a lot of requests for help and advice, including on how to identify a fake – sadly there are a lot of counterfeits on the secondary market – as well as offers of rare bags.”

The essential guide to Hermès handbags 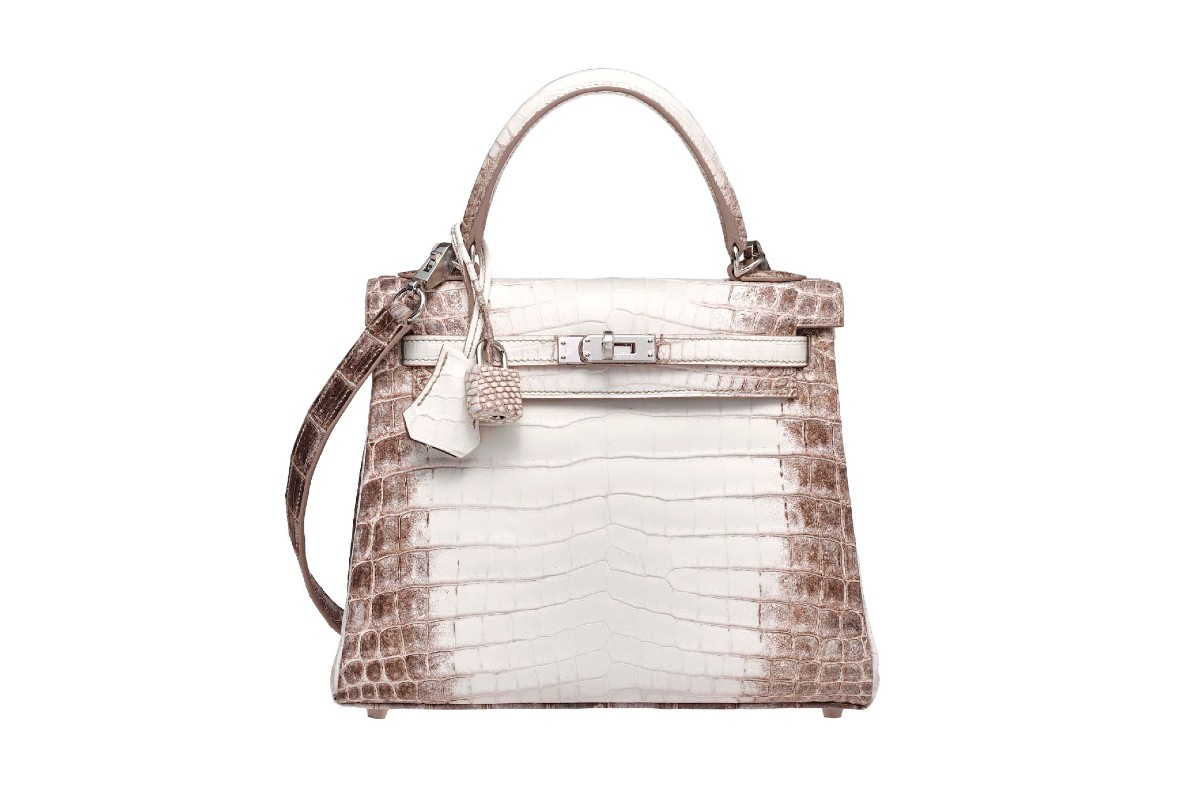 Originally known as the Sac à dépêches, the style was created in 1935 by ÉmileMaurice Hermès so his wife could have a bag that was more convenient to carry. In 1956, Princess Grace of Monaco, the former actress Grace Kelly, used her Hermès Sac to shield her pregnancy from the paparazzi, gaining the bag worldwide attention – and a new name.

In the know: Although produced in many colours and materials, the Osier Kelly or “Picnic” made of wicker and first produced in 2011 is one of the most unusual.

Highest price at auction: US$241,000 for a Himalaya Niloticus Retourne 25 with palladium hardware (Christie’s 2019). 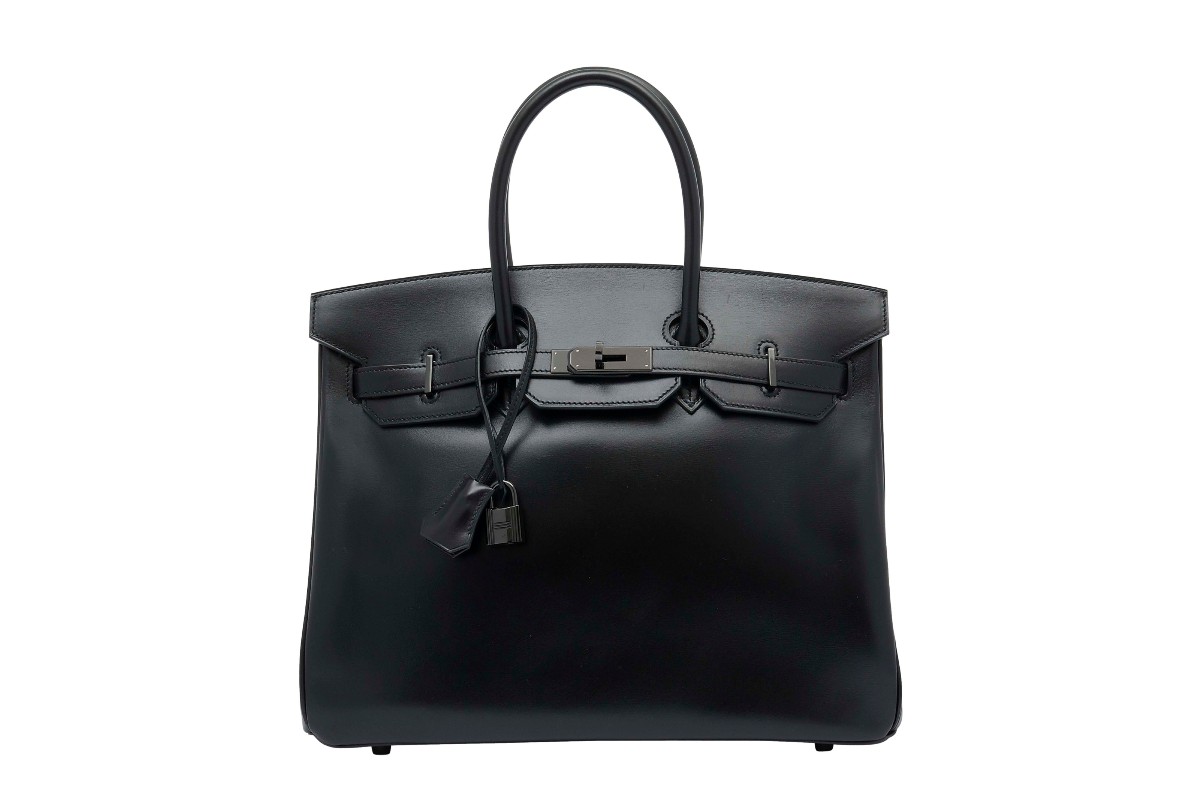 Born on an international flight in 1983 when actress Jane Birkin told her neighbouring passenger – Hermès creative director Jean-Louis Dumas – that most leather bags were too structured for her. He designed something more “boho” on the back of an airsickness bag. The Birkin is modelled after Hermès’ iconic Haut à Courroies bag.

In the know: The must-have Birkin is currently the “So Black”, featuring delicate black PVD-coated hardware. Designed by Jean Paul Gaultier in 2010, examples are rare and highly sought after.

Highest price at auction: US$386,000 for a Himalaya Niloticus Crocodile 30 with gold and diamond hardware (Christie’s 2017). 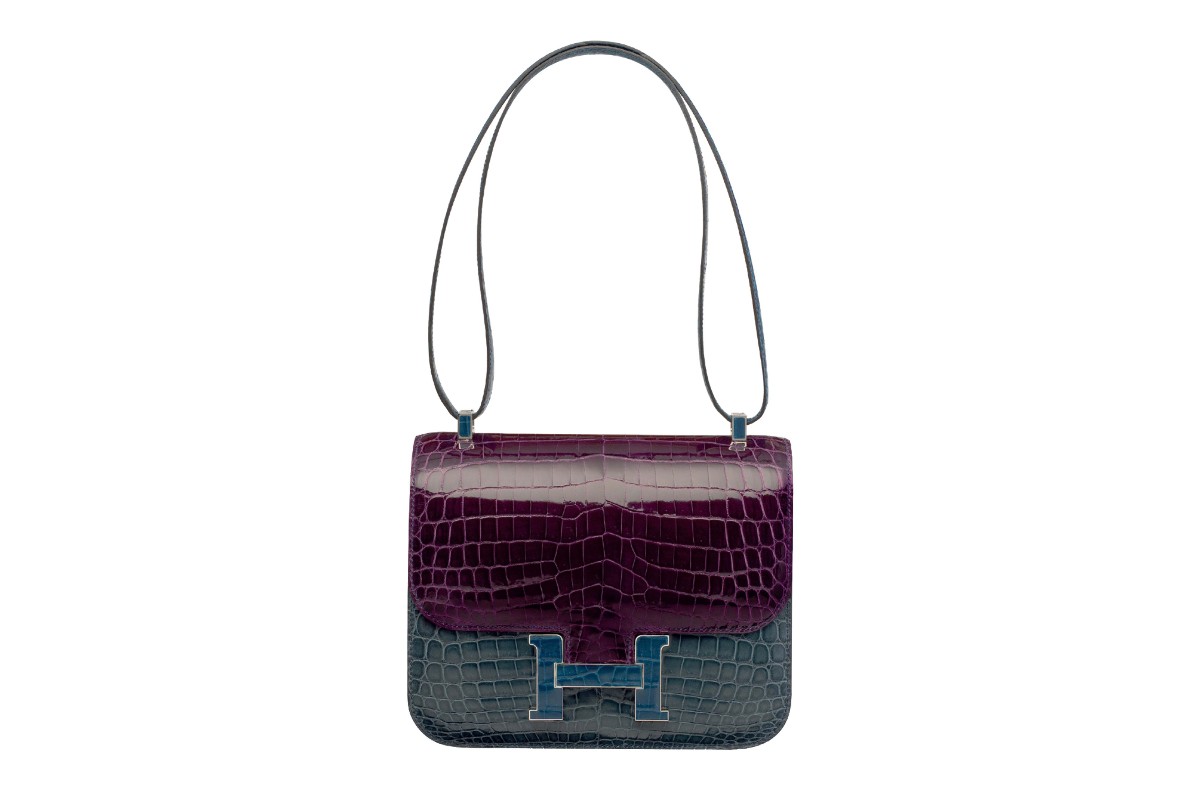 Named after the fifth child of Hermès designer Catherine Chaillet – the first bag is said to have left the factory on the day she was born – the Constance, which first entered the market in 1959, is perhaps the least well known of our trio. However, collectors admire its elegant shape and functional design.

In the know: The Constance is designed as a shoulder bag and was a favourite of Jackie Onassis. The Elan, a slightly longer and narrower style, was introduced in 2010.

Highest price at auction: US$89,000 for a Niloticus Crocodile 24 with palladium hardware (Christie’s 2016).