Watch out: Here are 7 of the best timepieces from Baselworld 2019 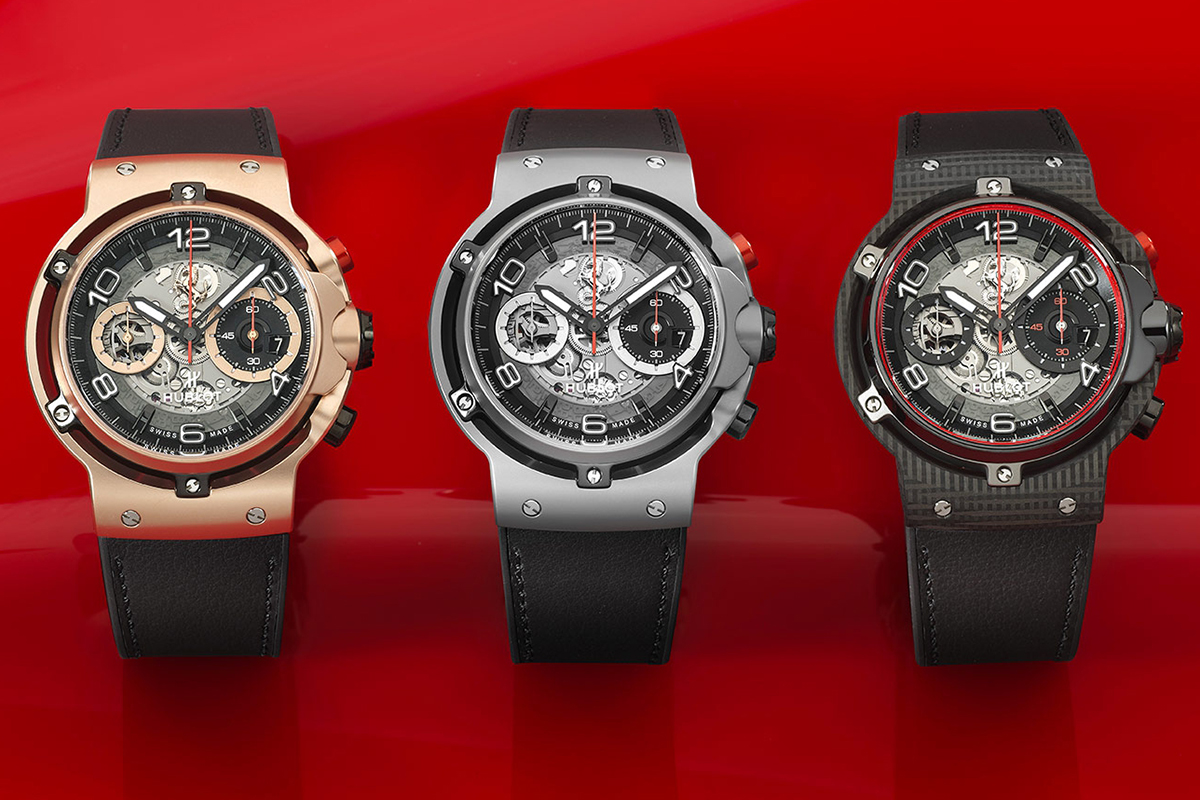 As one of the most anticipated events of the year for horophiles, Baselworld 2019 didn’t cease to amaze with hundreds of brands revealing exciting new releases.

From Bulgari unveiling the slimmest ever existing chronograph movement with a record-setting 3.3mm thinness to Hublot collaborating with Ferrari to launch the spectacular Classic Fusion Ferrari GT, watch aficionados were left in awe during the annual Swiss event.

The noticeably smaller summit, with 500 brands in attendance, will be the final exhibition as Baselworld is set to join forces with Salon International de la haute Horlogerie Genève (SIHH) in 2020.

As the six-day event ends its final hurrah, here are seven of the best watches from Baselworld 2019.

The heritage Roman brand made a new world record (for the fifth consecutive time) when it unveiled the thinnest ever chronograph movement with the Octo Finissimo Chronograph GMT Automatic at a record-setting 3.3mm.

A new women’s collection ‘born to be gold’ also stunned as it made its debut with the iconic line Serpenti Seduttori. Casting a golden glow on the wearer’s wrist, the bold timepiece features an iconic drop-shaped watch head.

“Our capability of fusing edgy, magnificent Italian design with the ultimate Swiss engineering and craftsmanship – this is why I talk about Rinascimento at Bvlgari,” Bulgari CEO Jean-Christophe Babin says. “It is truly a revolution of design and technology.”

The GMT-Master II and Yacht-Master were given a facelift alongside the Sea Dweller, which is for the first time offered in a yellow Rolesor version, and Datejust 36 – a watch equipped with new-generation calibre 3255 available in 18-karat yellow, white or Everose gold.

The blue and red hues of the GMT-Masters II’s bezel have been replaced with blue and black ‘Batman’ shades, complemented by redesigned lugs and sides of the Oyster case now fitted on a five-link Jubilee bracelet.

Meanwhile, a bidirectional rotatable bezel and raised graduations are features of the quintessential sailing watch, Yacht-Master 42, boasting numerals that have been shaped into the ceramic before being polished.

Tapping into cutting-edge technology with an app developed especially for golfers to improve performance, the timepiece offers real-time recording of short distances, scores, and 2D and 3D mapping of 39,000 global golf courses.

Originally modelled on a dashboard instrument used in racing cars and aircraft, the Autavia wristwatch has been developed with the latest watchmaking technology without erasing its adventurous spirit.

And with the legendary Monaco watch celebrating its 50th anniversary in May, all eyes are eagerly anticipating what TAG has in store.

Dubbed the ‘Ferrari for your wrist’, Hublot debuted a chronograph marrying an admiration for Italian automobiles and art of Swiss horology.

The two heritage brands have been creating unique designs since 2011 with each new edition, including the Classic Fusion Ferrari GT, introducing a new style of elegance and innovative design.

With a passion for mechanical performance and ultra-beauty appreciation, Ferrari worked on the body and Hublot the motor, building a sophisticated new collection that bridges automotive design and watchmaking motorisation. 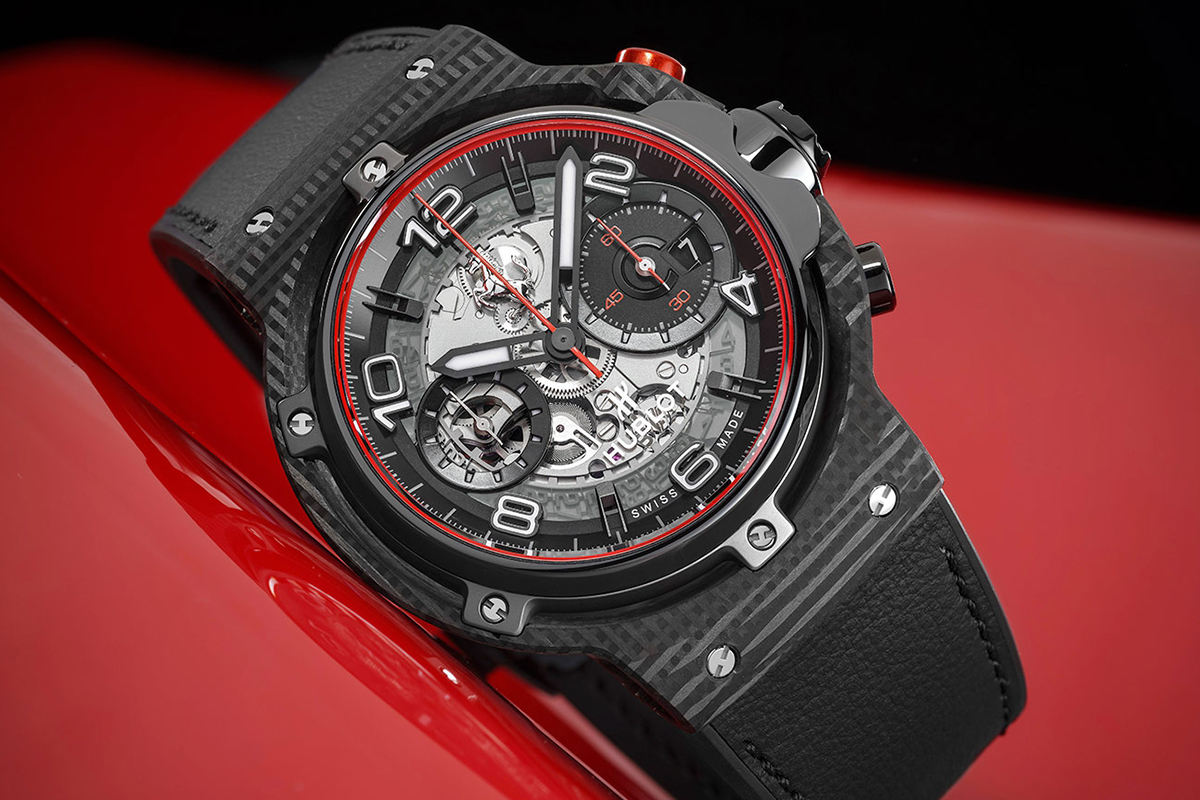 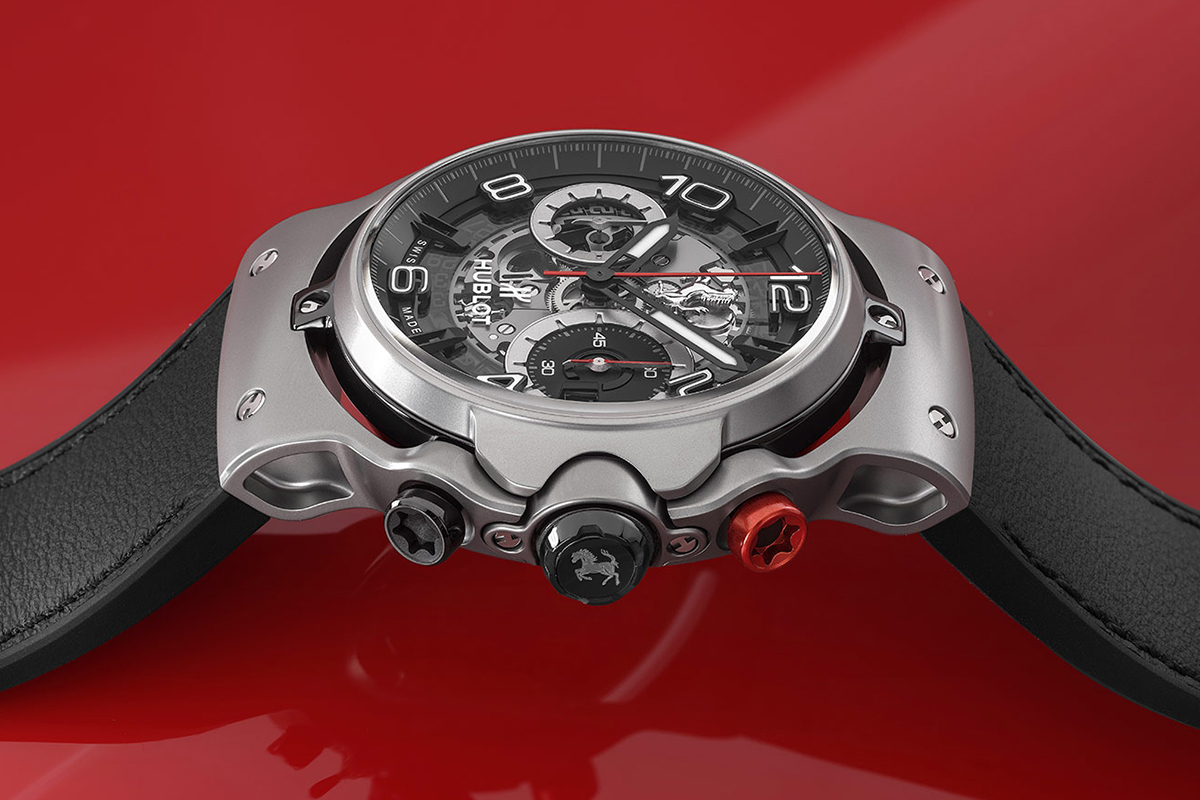 The company unleashed the futuristic DEFY El Primero 21 Carbon watch – a high-performance calibre with a lightweight and robust carbon fibre case, crown and chronograph pushers made unique with its randomly arranged carbon fibres.

Also unveiled was the three-hand DEFY Inventor featuring a single-piece Zenith Oscillator scientifically developed by the maison (which substitutes the traditional sprung balance) and ultralight-weight body courtesy of Aeronith – the lightest aluminum composite on the planet. 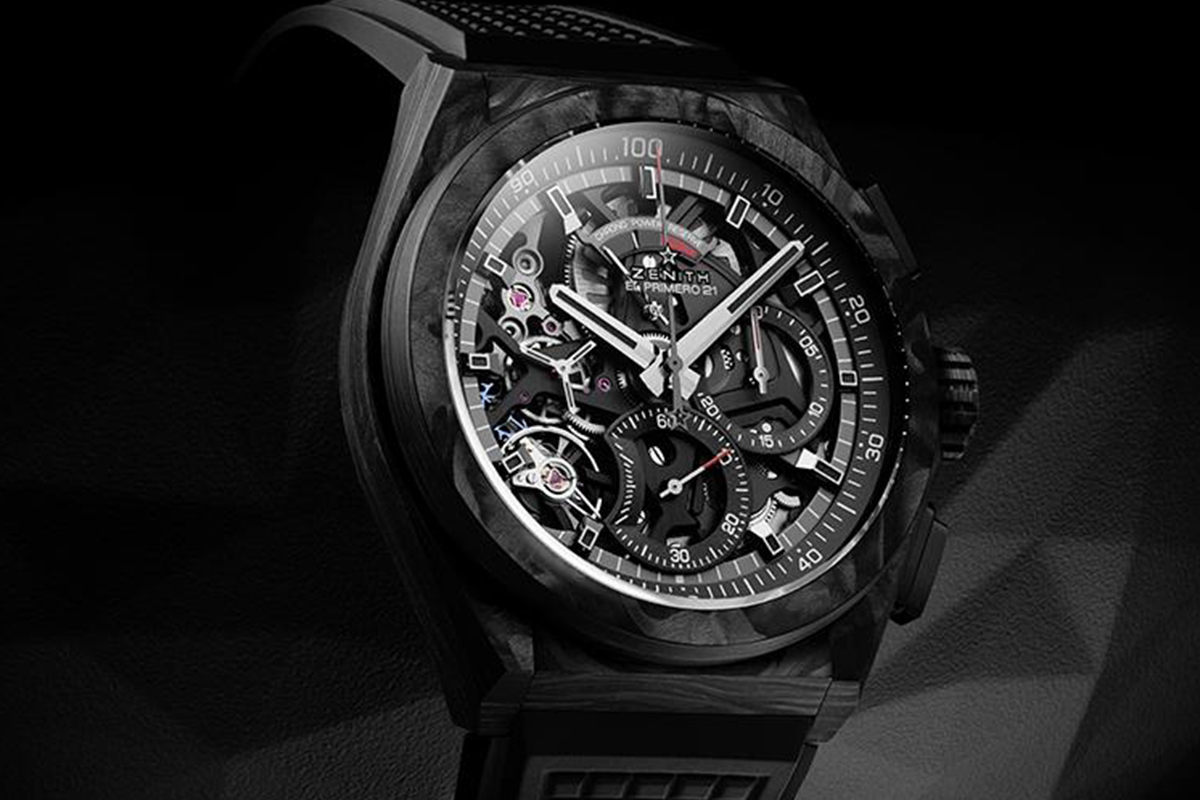 Whimsical, dainty chronographs were unveiled at Baselworld, from the Happy Sport and the L’Heure du Diamant range to the classic 1,000-piece limited edition Mille Miglia with a hint of La Dolce Vita.

From the West to the East, the Swiss watchmaker has created worldwide journeys told through the intricate complications and intriguing designs.

Chopard shared tales of China with its L.U.C Perpetual T Spirit of the Dragon and the Pearl piece, bringing to life the Celestial Empire’s founding myths with the one-of-a-kind model that took 200 hours of meticulous care to craft. 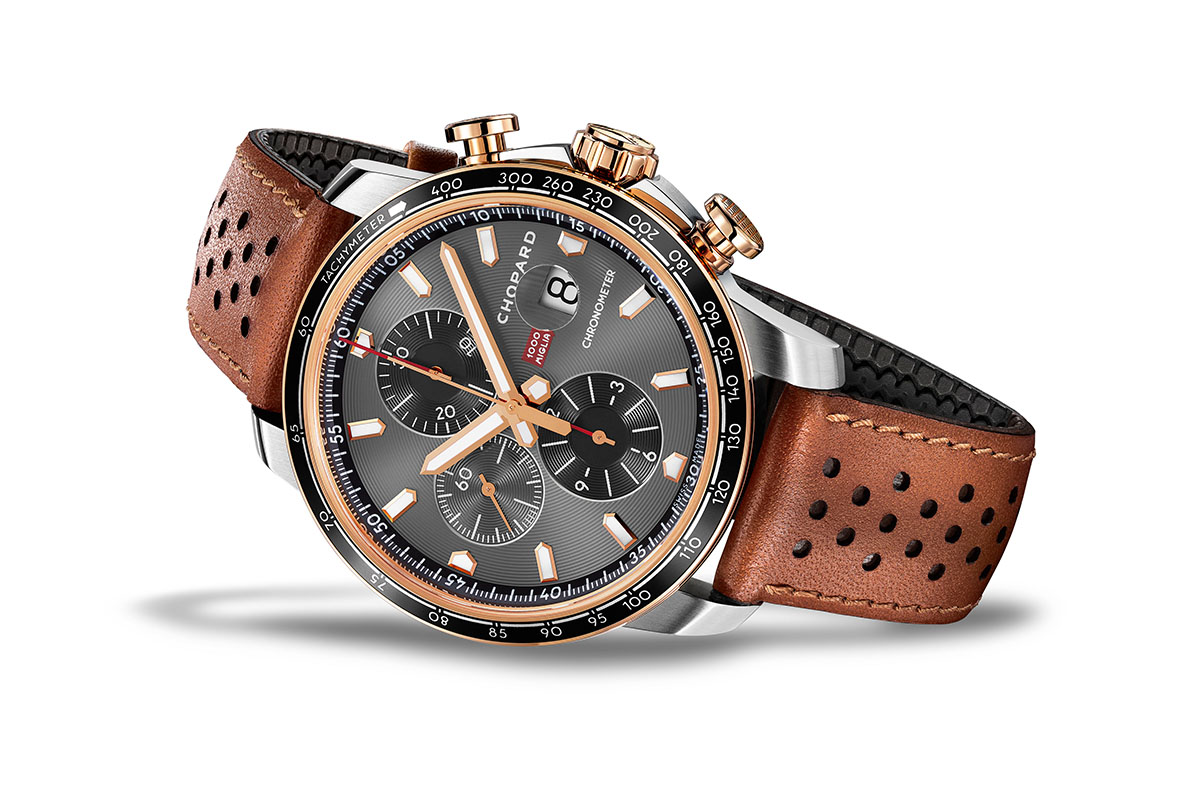 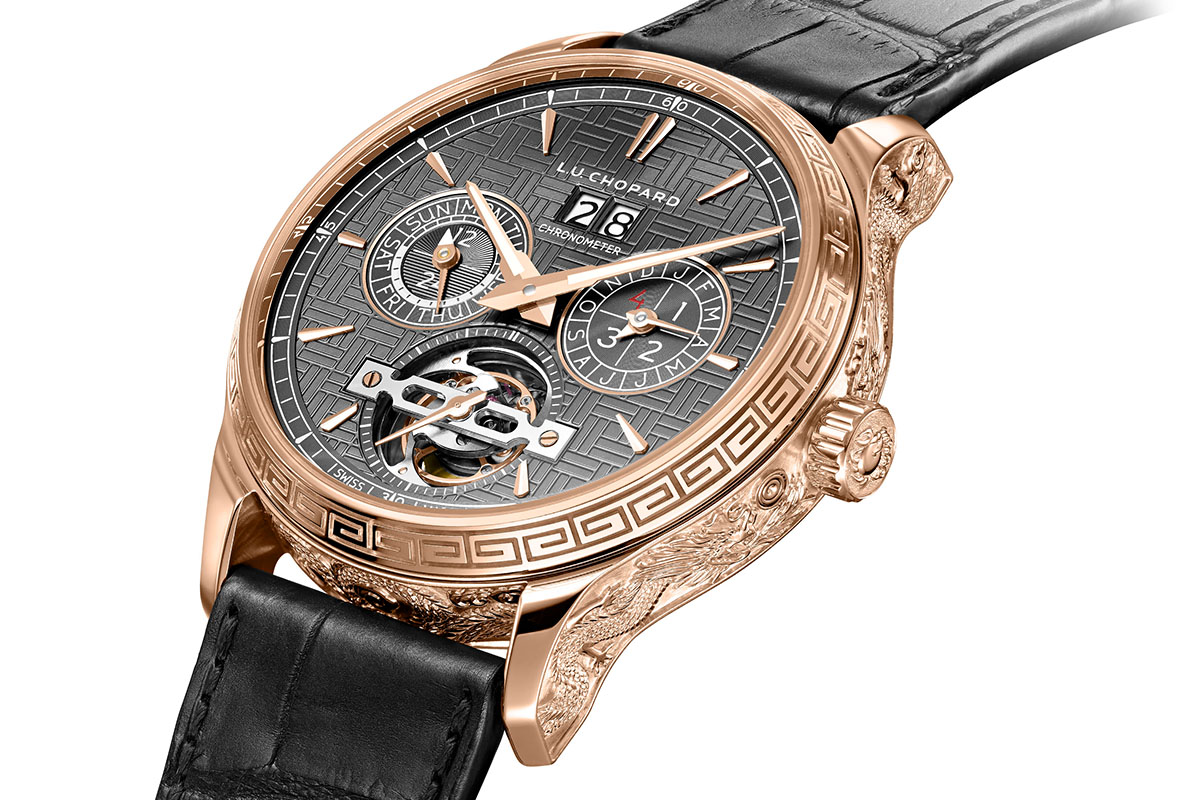 L.U.C Perpetual T Spirit of the Dragon and the Pearl. L.U.C Perpetual T Spirit of the Dragon and the Pearl.
[/img]

Striving to raise awareness about some of the world’s most endangered animals, Graff launched four of its five-piece collection of beautifully jewelled timepieces at the 102-year-old exhibition.

The GyroGraff Endangered Species features intricate mosaics of an elephant, tiger, panda, gorilla or rhino depicted on the dial through Graff’s pioneering technique of diamond marquetry.

Featuring a hand-wound double-axis tourbillon, white gold set case with diamonds and a 72-hour power reserve, the stunning creations not only explore horological engineering and artistic excellence, but also raise awareness about the rare species under threat. 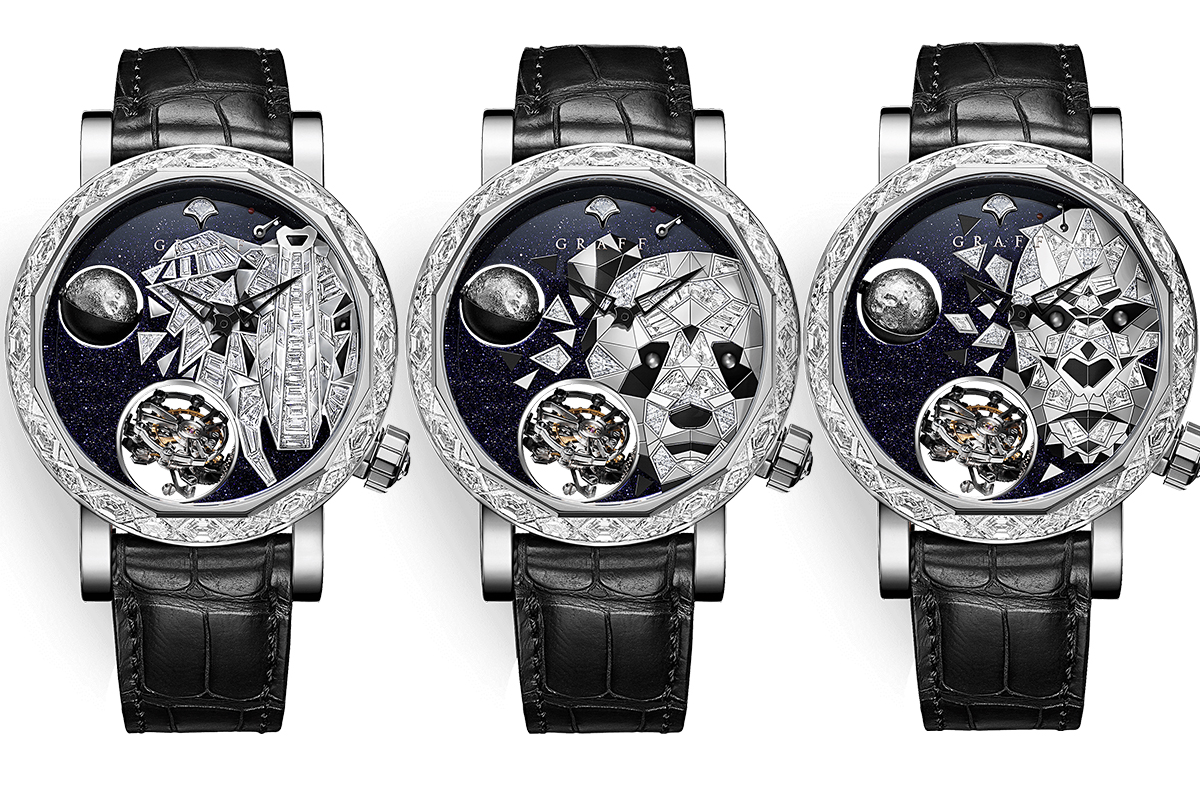