Take to the water with these super villian-style marine toys

Experience life a whole new way with these outlandish gadgets. 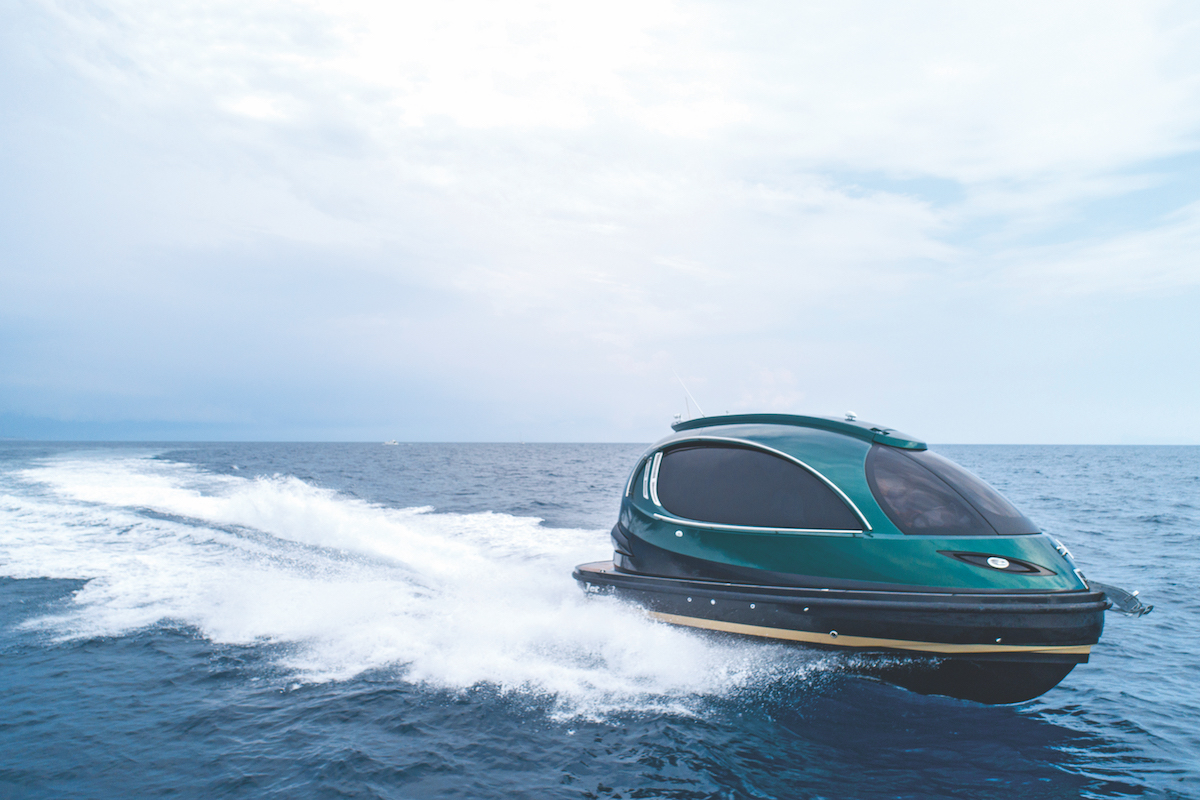 From turning yourself into a human submarine to learning to surf in one easy lesson, here are some fabulous playthings for the lazy but well-heeled poseur.

Yes, it looks like a space ship, or perhaps a helmet discarded by a Doctor Who alien, but that’s kind of the idea behind this powerful and expensive water-going people pod.

Created by an Italian company with the simple, descriptive name of Jet Capsule, the Royal Version 001 is described as a futuristic “mini yacht”, that can carry as many as 12 passengers, plus a captain, or jet pilot, at speeds of up to 62 knots. Which is very fast indeed.

Designer Pierpaolo Lazzarini says his inspiration came from space ships, and it features photochromic windows that change their transparency levels depending on how bright it is outside.

The cabin features nine comfy seats that look like they’ve been stolen from a Bentley factory, and a bar, of course. “It’s such a compact yet luxurious yacht – small enough to minimise maintenance costs but large enough to carry a group of friends,” Lazzarini explains.

Frankly, it looks like something the uber rich might use to get between their actual super yacht and Monaco Harbour, or the world’s most expensive tender. Our favourite feature, however, has to be the optional armoured version, which comes with a “rooftop bunker” and bulletproof glass.

It would be tempting to describe the experience as “just like riding a bike”, and yet piloting a Schiller Bike across shimmering blue water, like some giant water-skimming insect, is quite unlike that.

It’s a lot more like riding an exercise bike, which is basically what the Schiller is, with the detachable frame and pedals attached to a small timber platform and a couple of inflatable pontoons (the whole thing collapses down to fit in the back of your SUV). Only a million times more interesting.

Exercise bikes have the bonus of keeping you away from abusive motorists, aggressive cyclists and dozy pedestrians, of course, and are a pleasant enough way to burn calories but, out on ocean, breathing in the salty air and looking down at fish between your feet, it’s something else altogether.

A simple attachment allows you to power a little propellor, and turning it with the handle bars makes cornering, in wide, sweeping arcs, just like riding a bike, only far more pleasant. And a hundred times less onerous. If you must wear lycra, you still could (but please don’t), because you don’t even get wet.

Some people may even use them to commute, if they’re game to take on ferries and other big watercraft but what sounds more tempting is to ride your Schiller somewhere remote, drop the anchor and lay down on the (optional) removable deck to chill out with sun and waves.

Sure, surfing is all about the magic of communing with the elemental forces of nature and finding true bliss in the ‘green room’, but it’s also, just slightly, about posing and looking cool.

The problem, of course, is that surfing is difficult, physically draining and occasionally painful, which is why the slightly lazier poseur will be delighted with the arrival of the Fliteboard.

This delightful piece of Aussie ingenuity is a lot more expensive than a surfboard but it works in a lot more conditions, and locations, because it doesn’t need waves.

The Fliteboard is a ‘powered hydrofoil’, meaning that it stands up above the water, like a hydrofoil ferry, and makes you look like you’re surfing, or at least carving big, beautiful turns, even though you’re not.

You use a remote control to adjust the speed of the eFoil propulsion system and off you go, at speeds of up to 40km/h, with a range from your batteries of up to 25km.

Yes, it requires some balance, and a bit of practice, but it is far, far easier than surfing, and looks almost as cool.

Picture yourself lying on a skateboard, your chin just off the ground, while doing some ill-advised speed. If you’re a thrill-seeker, this probably sounds pretty good already, but to make it actually enjoyable for anyone, now picture yourself in that same position in the water; your arms out in front of you, holding on to a super-cool water scooter like the Seabob, as you are zipped along the top of the harbour, looking like some comic-book super villain, or Aquaman.

And then, to take your Aquaman fantasies to the next level, just imagine dipping your wrists, holding your breath and finding yourself being pulled through the deep green – sea creatures stopping in their swims to stare at you.

Yes, the Seabob experience really is unique and utterly amazing. As much fun as it is above the surface, doing up to 20km/h – which feels super-quick when you’re roughly 10cm above sea level – it is when you allow the Seabob to turn you into a human submarine that you fully appreciate it.

In places such as Monaco and Miami everyone has at least a couple of these, or as many as half a dozen, so that if they’re out in the ocean and there are dolphins around they can just hop in and join the action.

Buying more than one does seem a little extreme, however, when you consider the cost. It is all-electric, however (with Tesla batteries, no less), so you’re creating neither petrol pollution nor the noisy kind, and it is so portable that you can throw one in the boot of your car.

Grant Dwyer, from Seabob distributor Marine Lifestyles, points out that “this is the Porsche or Ferrari of water scooters”, so you are talking about a premium product.

Frankly, taking a corner on a Seabob, which involves leaning your body into the water so that you spear off, shark-like, in a different direction, is possibly even more fun than driving a Porsche. It’s certainly more glamorous.

Do you really need a high-quality drone in your life? Unless you’re a professional filmmaker, or trying to spy on a celebrity, probably not. Will using such a drone annoy your neighbours? Quite probably, yes.

And yet, ask anyone who’s had a steer of one of these things and they’ll make that low, “Ohhh” noise that will tell you they are one irresistibly fun toy.

Think of the giggles you used to have driving radio-controlled cars, and times it by a thousand, basically. The very best drones aren’t just fun to fly, though, they’re crazy fast and capable of producing footage that will blow your mind. 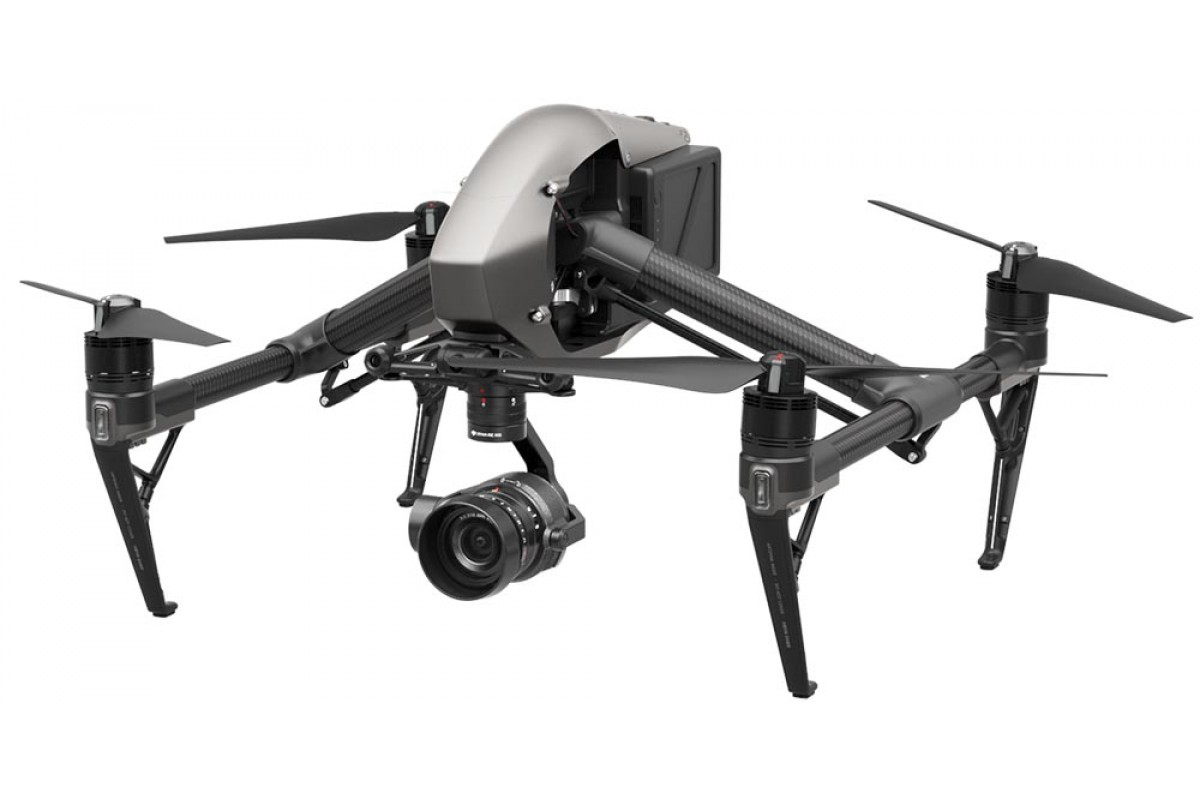 With the DJI Inspire 2 Cinema Premium Combo you’ll be flying a 4K camera that can stream HD video, has a 360-degree rotating gimbal for perfectly smooth shots, no matter how bad you are at piloting it, with a maximum speed of 108km/h and the ability to descend at nine metres per second, which looks fantastic, and eagle-like, on film.

This drone even has self-heating technology, so it won’t fall out of the sky when filming your amazing snowboard jumps. It also features something called FlightAutonomy, which allows it to avoid obstacles, even if you can’t see them, which you might not when you’re using a drone with a range of seven kilometres.

The problem with drones, of course, is that they’re very easy to break, but fortunately your Combo pack comes with many, many spare parts. You’ll need them.